12-25 March 2019. My first time in Japan was in 2018, and I’ve written about how I tried to take the boat down the Hozugawa River to Arashiyama; how I took the train from Kyoto past the Arashiyama stop and travelled on to Kameoka; how I walked for ten minutes partly through and partly around a large wide-open construction site to the boat launching area; how I got there only to be told there were no boats running that day. It had rained buckets the day before and the river was too high and too dangerous for the open boats to travel on it. I was so disappointed.

Anyway on this second trip to Japan we’re back in Kyoto and I’m determined to try again. The boats are traditional flat-bottomed boats guided by boatmen with bamboo poles and oars. From pictures I gather there are some rapids to pass through 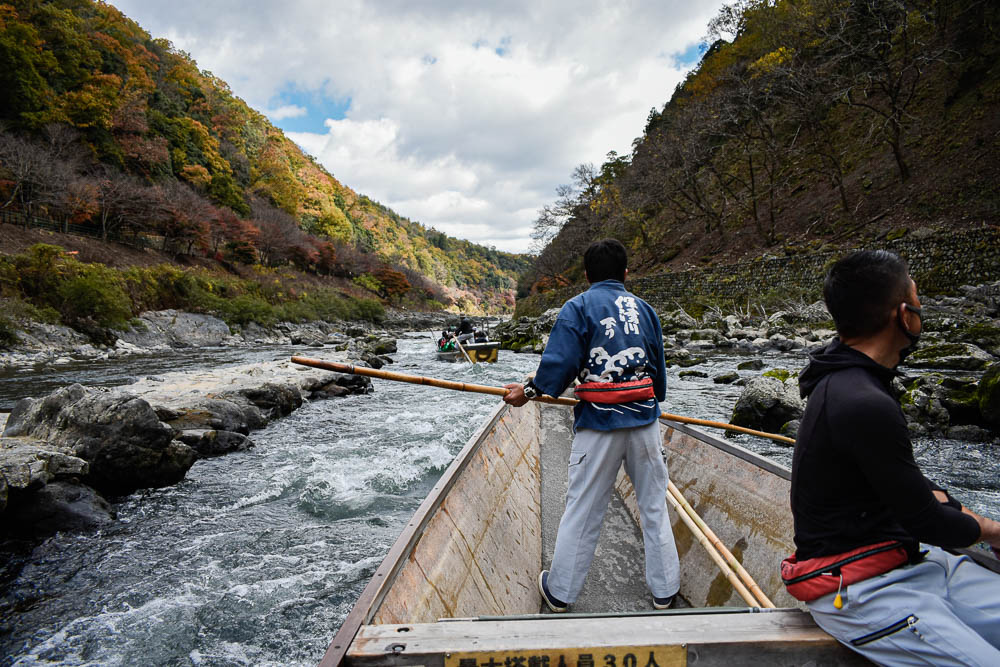 Photo by a Japanese photographer whose name I cannot translate, licenced under Creative Commons

but by all accounts it’s mostly a leisurely two-hour down-river drift through the largely undeveloped ravine. It sounds heavenly, but once again I’m disappointed. This time it’s due to high winds. I guess I’m just not meant to make this particular journey.

Anyway we do take the Sagano Scenic Railway from Arashiyama to Kameoka, which runs alongside the same river. It’s one of those old fashioned nostalgic trains with wooden seats, a holdover from an earlier era. When a new faster route was created the Sagano train was saved. Waiting at the station I’m struck, once again, by Japanese style: the organization as we’re told exactly where to line up,

the smart uniforms of the station attendants, 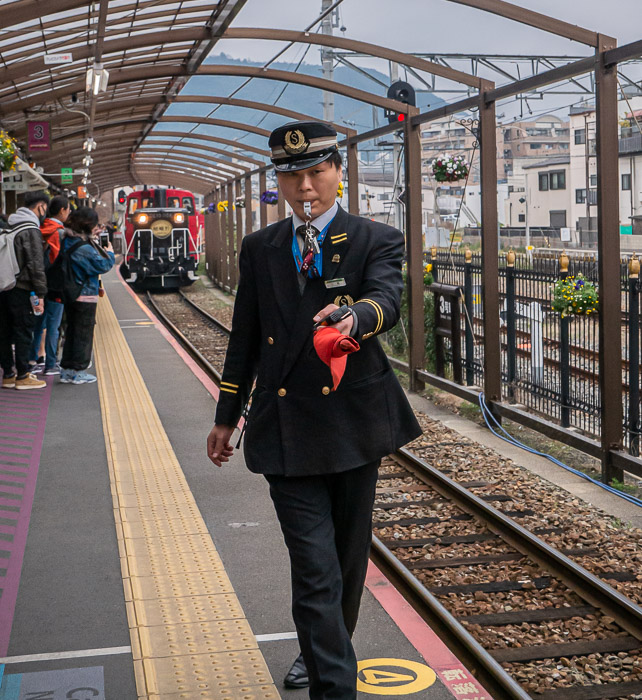 and the crisp clean red and yellow of the quaint little train. 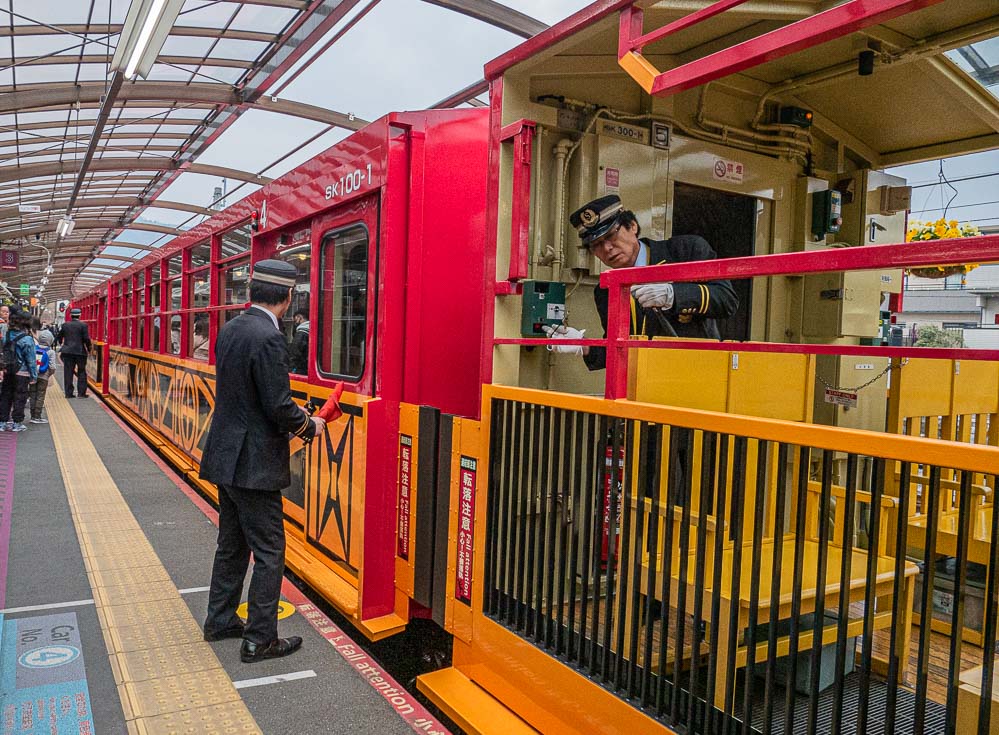 We love train rides. I do think Don would have been in heaven if it had been a steam train. Either way it was a lovely way to spend an afternoon even on a grey day. It’s a short ride, only about 25 minutes, but it seems longer than that. I’m occupied moving back and forth from the closed cabins

to the open one, taking in the aquamarine river, 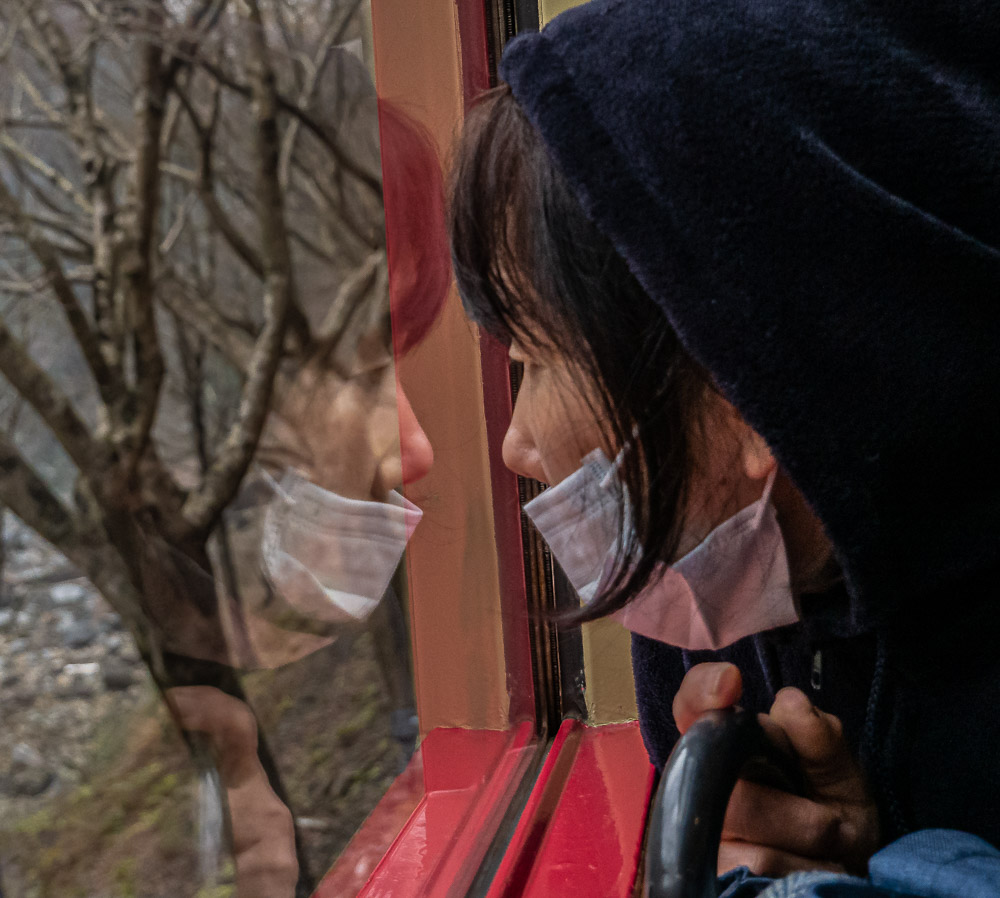 However I have to say that the single most interesting and intriguing thing about this pleasant trip is the discovery of tanuki. 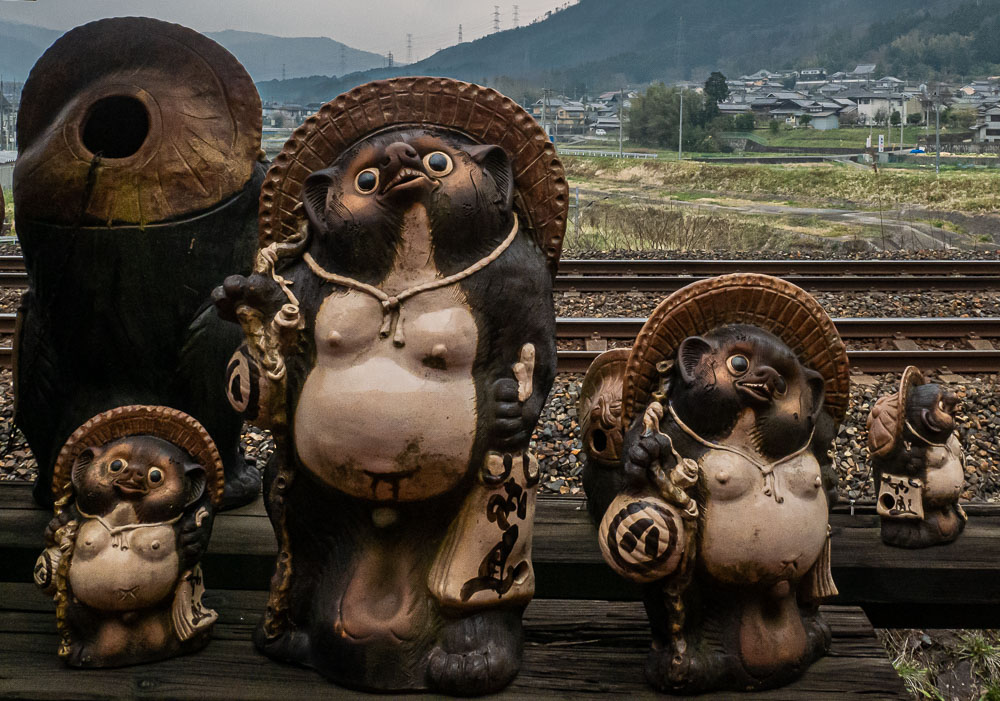 We’d seen one or two previously and were puzzled about them, but on this trip they are in such abundance that we can no longer ignore them.

We stare and stare. What are they? Do they really have huge, um, appendages, or are those things a poor rendition of legs, or something else entirely? The more we look the more we have to admit that these creatures have large, and very noticeable testicles; that seems to be the point. Having been raised in the “puritan” west we are dumfounded. There is no accounting for Japanese style.

It turns out that tanuki have been part of Japanese folklore for centuries. They are well-endowed racoon dogs and represent a traditional Japanese prankster spirit. Apparently they are known in the west, though not by me, in Super Mario Brothers 3. Mario has a tanuki suit, which allows him to change form. So they are shape-shifters. In some images tanuki are shown with their enormous testicles thrown over their back like a traveller’s sack, or using them as drums, or weapons. Read it and weep guys. They can knead their testicles into any shape they like, and have been known to use them to impersonate humans so they can buy alcohol and sweets. Hmmm. So they are sugar-addicted alcoholics. There’s also a children’s song, sung, bizarrely, to the tune of a Baptist hymn, that goes: Tan-tan, the tanuki’s testicles ring/the wind has stopped blowing/but still they swing-swing. Better be careful of the tanuki though – it can possess you, and it loves pranks. So: mischievous, a master of disguise, a shape-shifter, and a little bit tipsy, and for all that they are regarded in modern Japan as lucky. I love it. The more I read about tanuki the more they reminded me of a Tengu. Only nicer.

It would be easy to say “from the ridiculous to the sublime”, except I don’t think of tanuki, and their place in Japanese culture, as ridiculous. In part it’s this embrace of the comical, and the magical, in an apparently extremely ordered society, that makes me love Japan so much. At first glimpse they seem so tightly wrapped, and then bit by bit you come to understand they’re not like that at all.

Anyway, on to some examples of the sublime in Japanese style. Before we begin the Sagano train ride we have coffee somewhere in Arashiyama, upstairs in a tidy but unremarkable place, except for these exquisite opulent dolls, 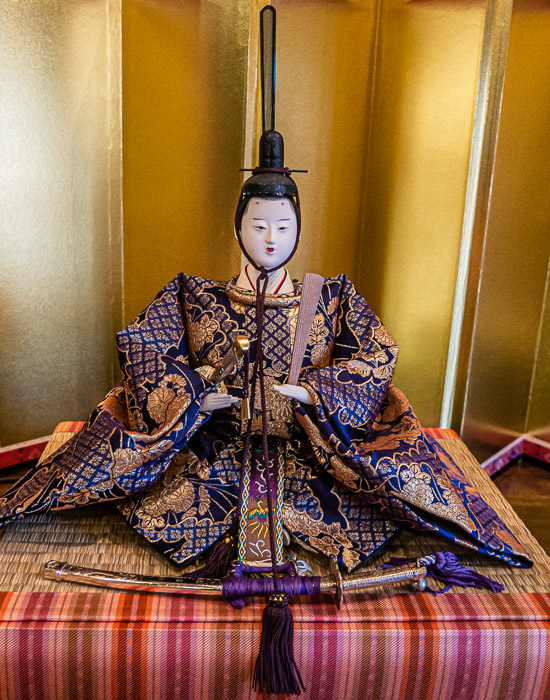 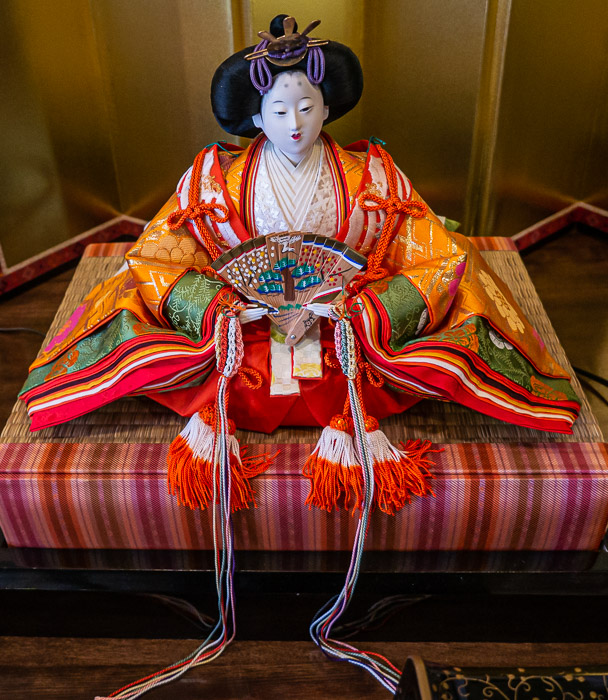 which are arranged in a setting that seems to indicate a certain level of reverence. They are obviously something beyond mere ornamentation. 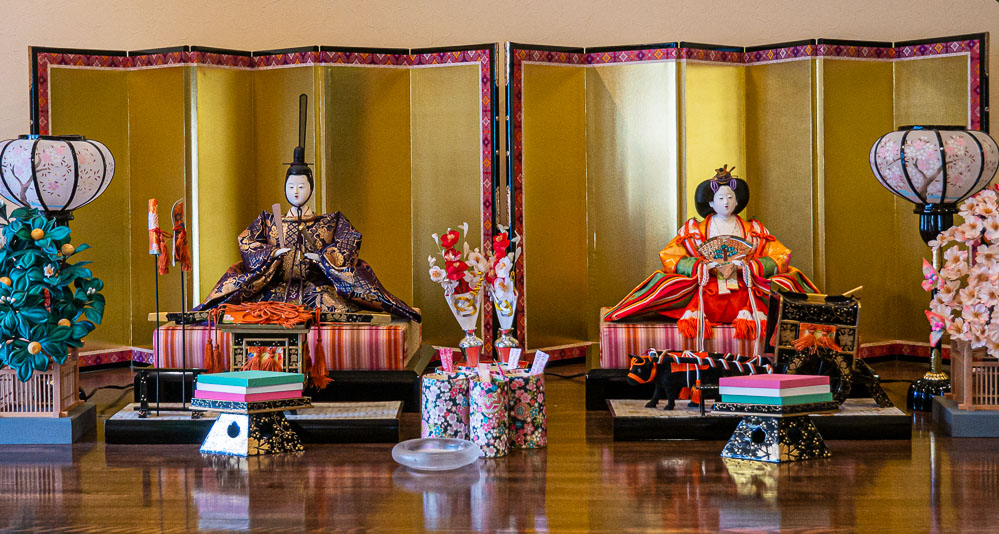 I discover they are emperor and empress dolls, and that they are strongly associated with Hinamatsuri (Doll’s Day or Girl’s Day) celebrated on March 3rd. Most families try to ensure that girls have a set of these dolls for their first Hinamatsuri, but they are expensive ($1500 – 2500) and may become family heirlooms handed down through the generations. They bring me joy – the sumptuousness, the colours, the beautiful detail, the rich fabric, the unparalleled perfection – all combine to create something that makes my heart sing. The best of Japanese style.

On another day we go to Nijo Castle,

an iconic example of Japanese style on a much grander scale. I can hardly find words to describe the beauty of the embellishments on the Karamon Gate, the entrance to the Castle grounds, and am glad I have a photo to share.

I keep coming back to the word elegant; the elegant simplicity of the overall design, which yet also incorporates great detail in the painted carvings and in the extravagant gold ornamentation. And for all its elegant simplicity it’s also royally lavish, and that appeals to me as well. I lean back and look up, straining my neck, wishing I could get closer to all that beauty.

And beyond the gate, across the gravelled courtyard there is more – the Ninomaru Palace,

also richly decorated. This palace, within the moated and walled grounds of the castle, 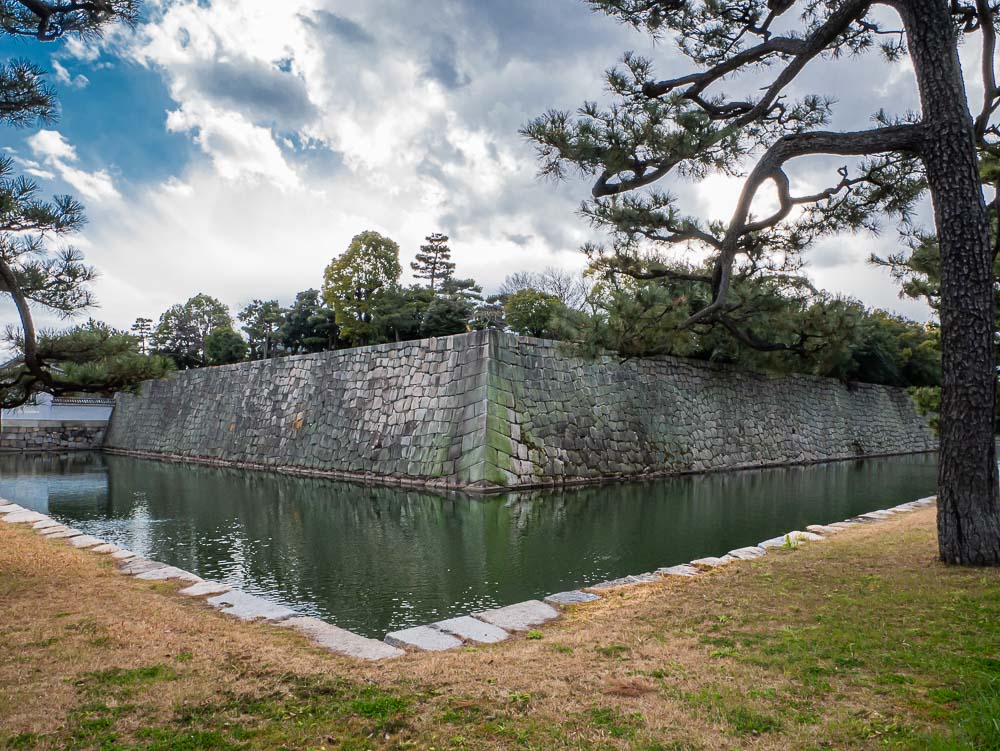 served for nearly 300 years as the residence of the ruling Shogun during his visits to Kyoto. The palace has an intriguing security measure: the multiple separate buildings are connected by corridors that have what are known as nightingale floors because they squeak when stepped on. You cannot sneak because of the squeak!

I remember the interior – the tatami mats; the exquisite painted sliding doors; the elaborate carved and painted ceilings; the models of supplicants in period dress bowing to the shogun who sits at a distance facing them and flanked by bodyguards hidden in closets. One can imagine the reverence, the protocol, the politics, the endless rules, the kowtowing, all surrounded by an understated beauty in which a muted gold is the predominant colour. This interior in Reikan-ji Temple, an imperial nunnery, is very similar to those we saw in Ninomaru Palace.

Surrounding the palace in traditional Japanese style is a serene landscaped strolling garden with a pond, ornamental stones, and manicured pine trees. 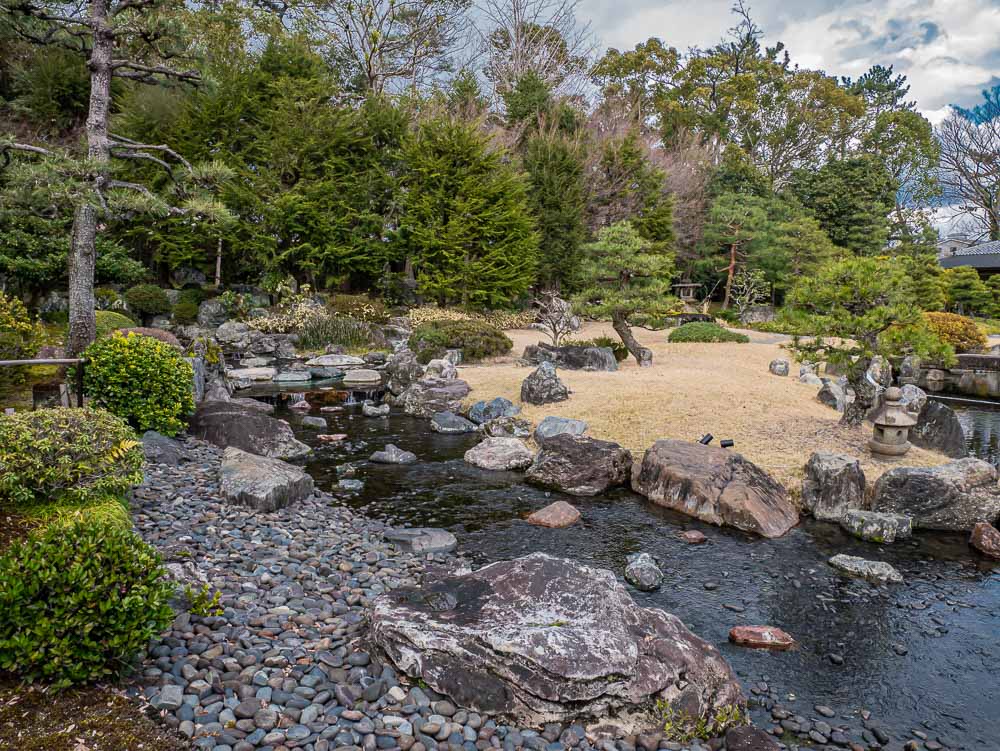 About four kilometres directly west of Nijo Castle is the Philosopher’s Path, so named because Nishida Kitaro, one of Japan’s most famous philosophers, would meditate as he walked this route daily to Kyoto University. 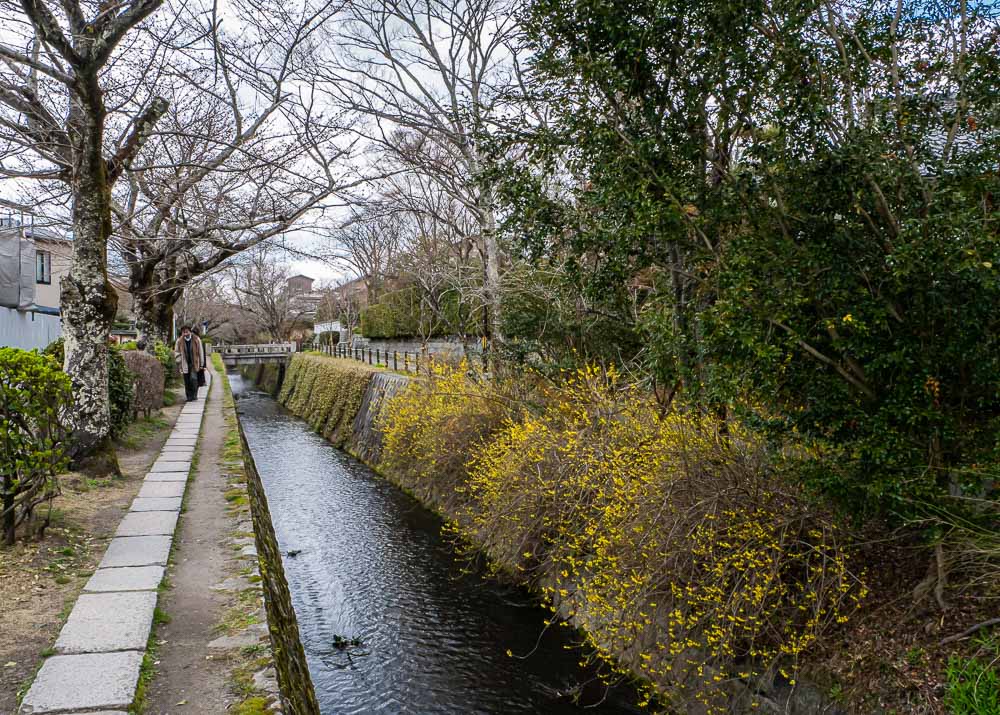 It’s only two kilometres long, but this tranquil path is a complete escape from the city. I’d walked it on my previous trip to Japan, but of course on this second trip I want to share it with Don. This time I pay a little more attention to the restaurants, cafés and boutiques along the path and discover some lovely, but more ordinary, examples of Japanese style: 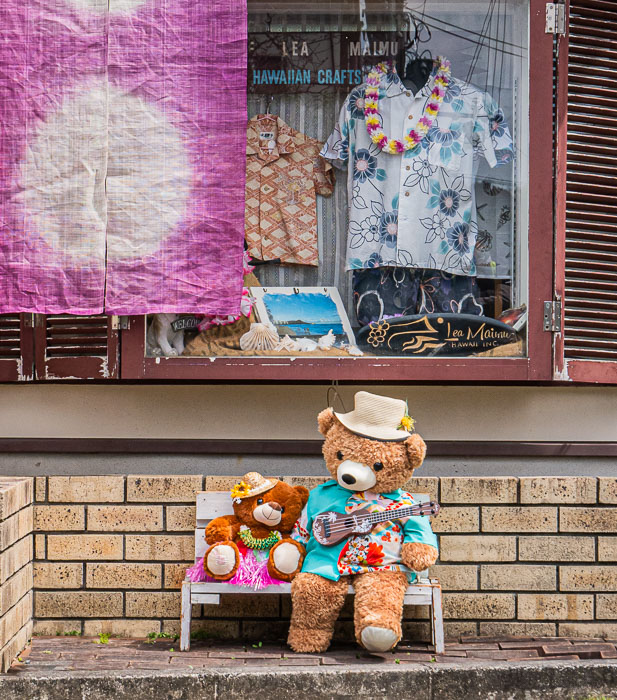 The Japanese have an ongoing love affair with cute. They call it kawaii, and it is everywhere. It can even be seen in ancient dolls on display in an ancient nunnery.

The dolls can be seen at Reikan-ji Temple, which is a short walk from the Philosopher’s Path. It’s a Buddhist nunnery and princesses served as the head priestess for many generations so there are many imperial treasures preserved there, including dolls that the princesses played with. 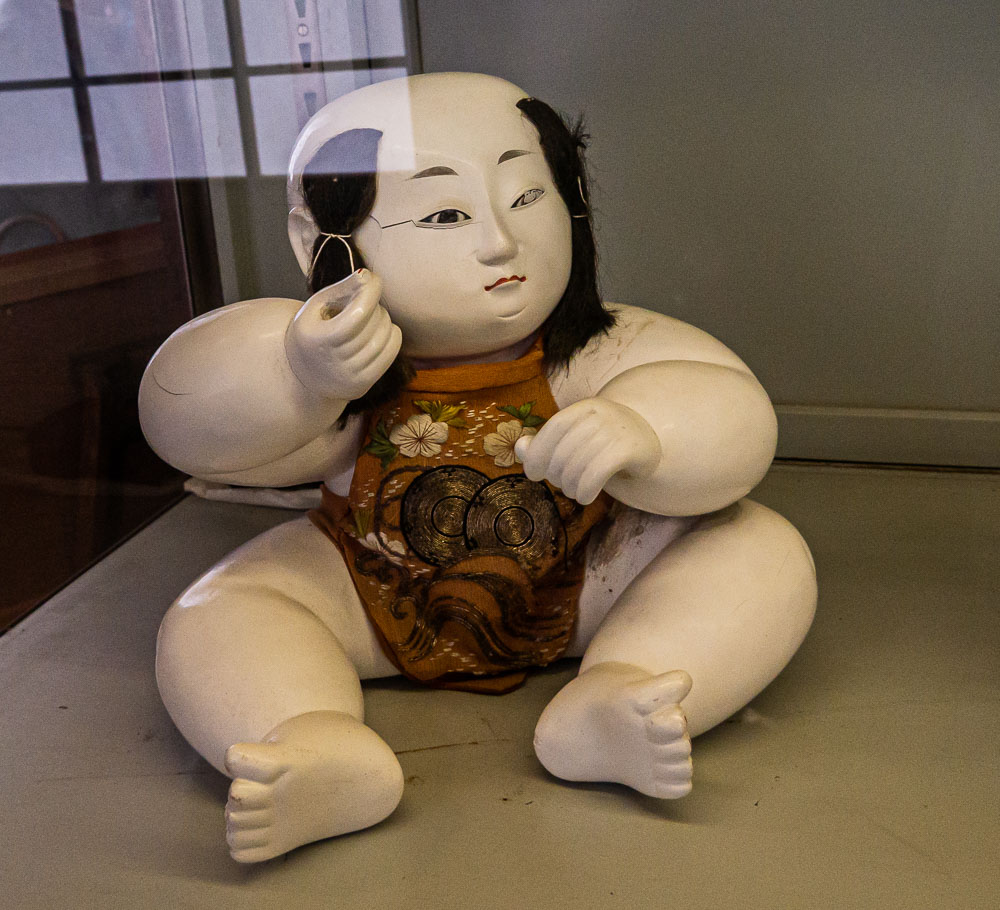 Surely it is in part this bygone style that has permeated today’s Japan and contributes to their love of all things cute. Looking at the dolls is like looking back in time, but the same style can be seen today. I am completely enamoured of them. And surprised, I supposed simply because I’ve never before seen ancient Japanese toys.

I didn’t set our to write a post about Japanese style; I know little about it except what I see. Since this will be the last post about my second trip to Japan I just wanted to share some of the leftovers, but as I looked through the photos I’d chosen a theme emerged of its own accord. The Japanese love cute, and they love the magical, and the whimsical. At the same time one of the great hallmarks of Japanese style, it seems to me, is simplicity and elegance, perhaps more than any other culture. So this is a celebration of all of that.

I visited Japan solo in 2018 – Tokyo, Nikko, Kanazawa, Shirakawa-go, and Kyoto. Posts about that trip can be found at the end of this post.

I visited again with Don in 2019. We were based in Kyoto and did day trips to Nara and Ine. Here are all the other posts about that trip:

Kyoto By The Sea: Amanohashidate and Ine

You Can’t Trust the Man Behind the Bar; food and fashion in Kyoto

Here Be Dragons – Kiyomizudera Temple and the Seiryū-e Festival, Kyoto

The Harbinger of Spring – plum blossoms at Kyoto’s shrines

The God of Rice – a Fushimi-Inari pilgrimage

The Ultimate Treasure Hunt – a flea market and a food market in KyotoNext post: I have some photos I want to share of fall in Vancouver last year. I know, I know – it’s spring, at least it is here in Vancouver. But it’s fall somewhere. And beauty is beauty, right? Or maybe I’ll do a post about beautiful buildings from around the world.
All words and images by Alison Louise Armstrong unless otherwise noted
© Alison Louise Armstrong and Adventures in Wonderland – a pilgrimage of the heart, 2010-2021.