25 March 2019. You really need to see this place! I know you love a bargain, and this place is full of them. It’s like a massive garage sale that covers several blocks and everyone has something different to sell.

We hadn’t planned on being there. We were going to the Kitano Tenmangu Shrine neighbourhood that day anyway for a geisha performance, Kitano Odori – something I urge you to see if you ever get to Japan – just breathtaking! The first time I went to Japan I went to a geisha performance, Kamogawa Odori, which I’d learned about in pre-trip research, so researching for my second trip, this time with Don, I checked again for geisha performances. We were in luck! The first performance of the season was to be on our last day in Kyoto. I seem to remember you could only buy tickets one week before, so we made sure to do that, first thing in the morning at the tourist office in the train station. With that task done we went on a journey for the day, adventuring to Amanohashidate for a gentle walk along a sandbar, and on to Ine, a unique traditional fishing village. That was a beautiful day.

Our second piece of luck? The Kitano Tenmangu flea market, known locally as Tenjin-san market, is only held on the 25th day of each month, and that was the day we’d be there! We made sure to get there early so we’d have plenty of time to explore before the geisha show.

There are antiques and vintage items,

and curios everywhere we look. 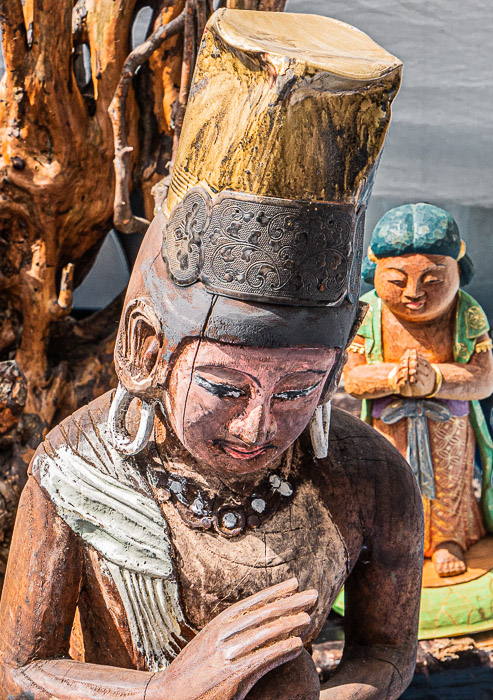 I’m constantly stopping to take photos of all the finds that are uniquely Japanese.

But of course almost everything is uniquely Japanese. Where else would you find a painting of a yellow-eyed cat with its “arms” folded and an expression that says Oh please! I can see right through you!? 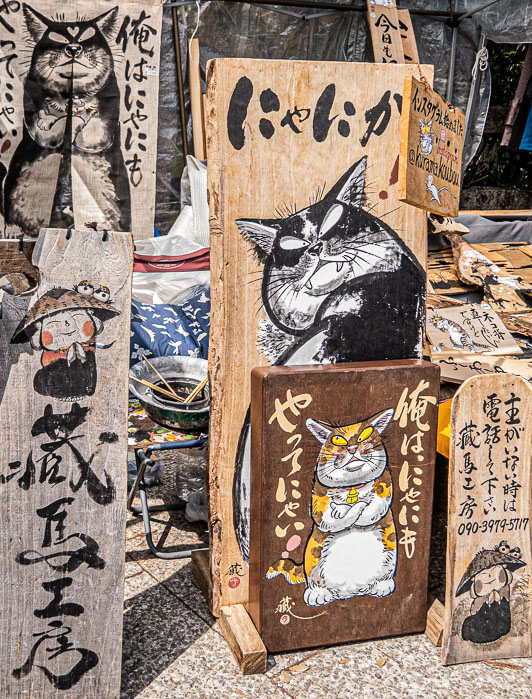 The attics and storage rooms of Japan have been emptied out and put on display. Here are both the special artefacts, and the detritus of life spilled out on to the street; picture frames and small furniture, 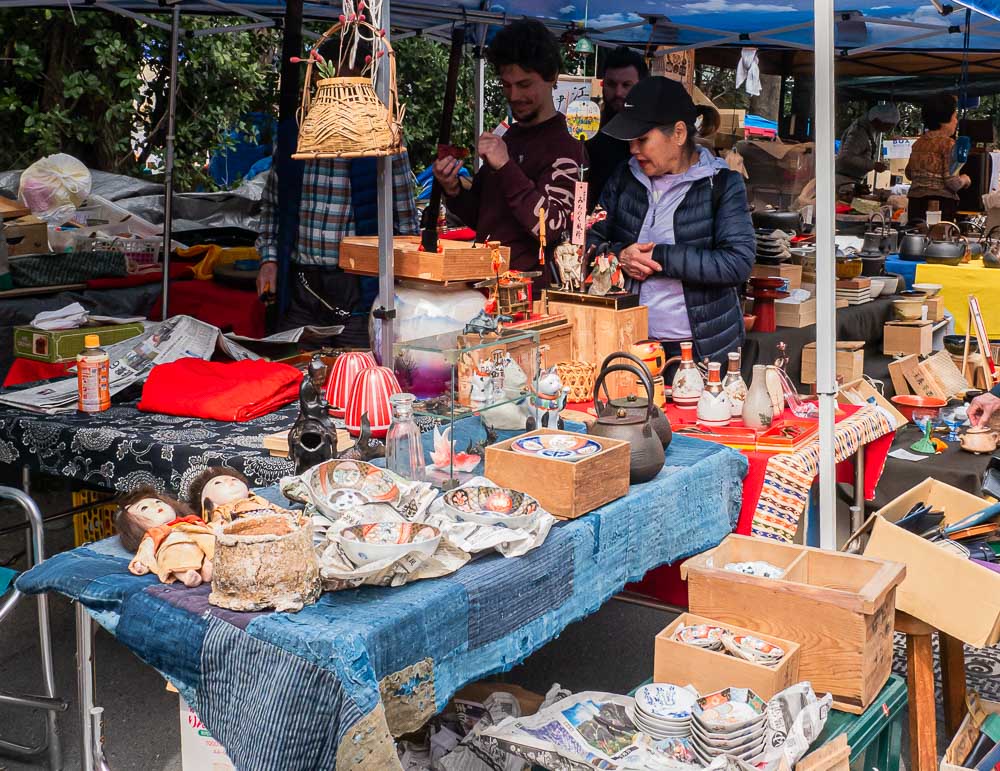 and beautiful hand made pottery. 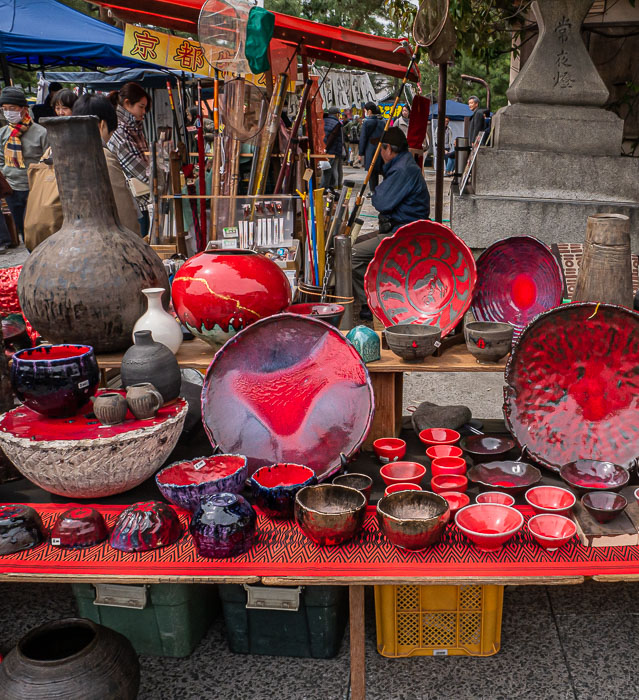 All of it has been carried there in boxes, unpacked and spread out, from very early in the morning. It’s a big day. Everyone is hoping to make a sale on this one day of the month that the market is held.

There are antique dolls,

and racks and racks of gently-loved kimono which you buy by the size of the bag you stuff them into,

and power cords and half-used spools of thread,

and everything in between.

Where else would you find dolls like these? What is in her mouth? Or is it her tongue sticking out? And rabbits! Dolls and rabbits in beautiful hand made traditional dress. 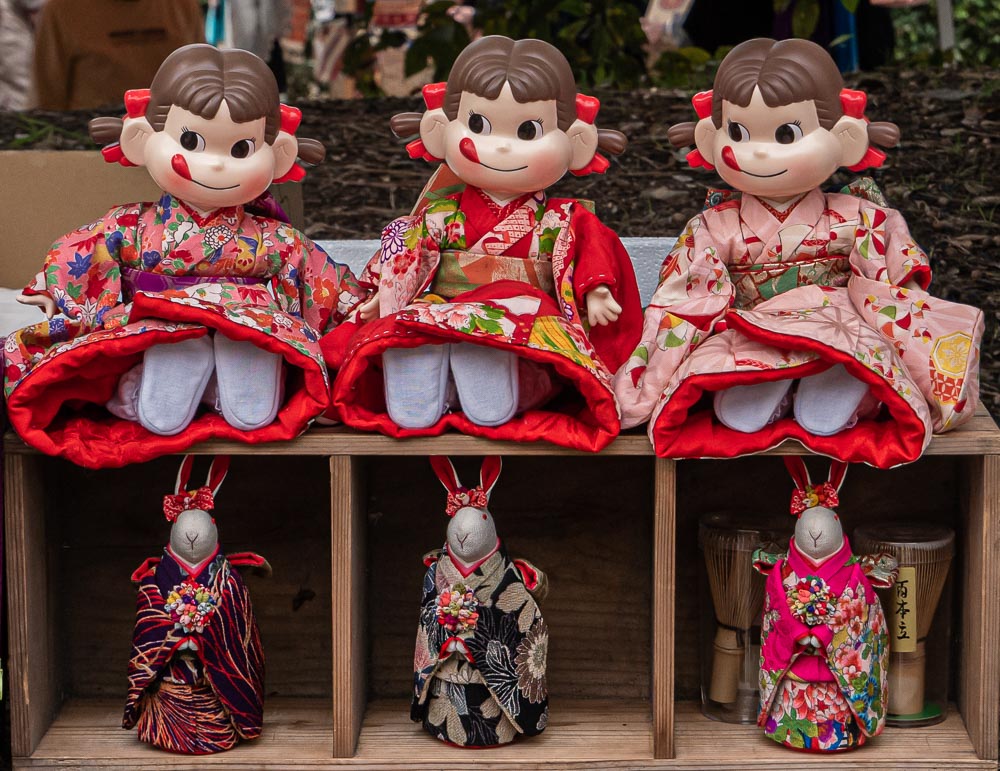 I’m drawn like a magpie to the colours of these beautiful embroidered purses,

and being into clothes, and sewing, the kimono fabric is enough to make me drool; such beautiful colours and designs. 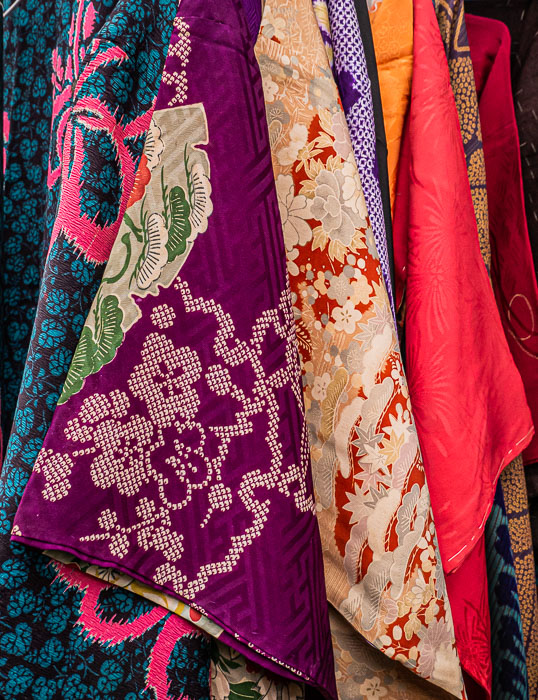 Speaking of design, this ferocious swordsman on the back of a happi jacket gets my attention, 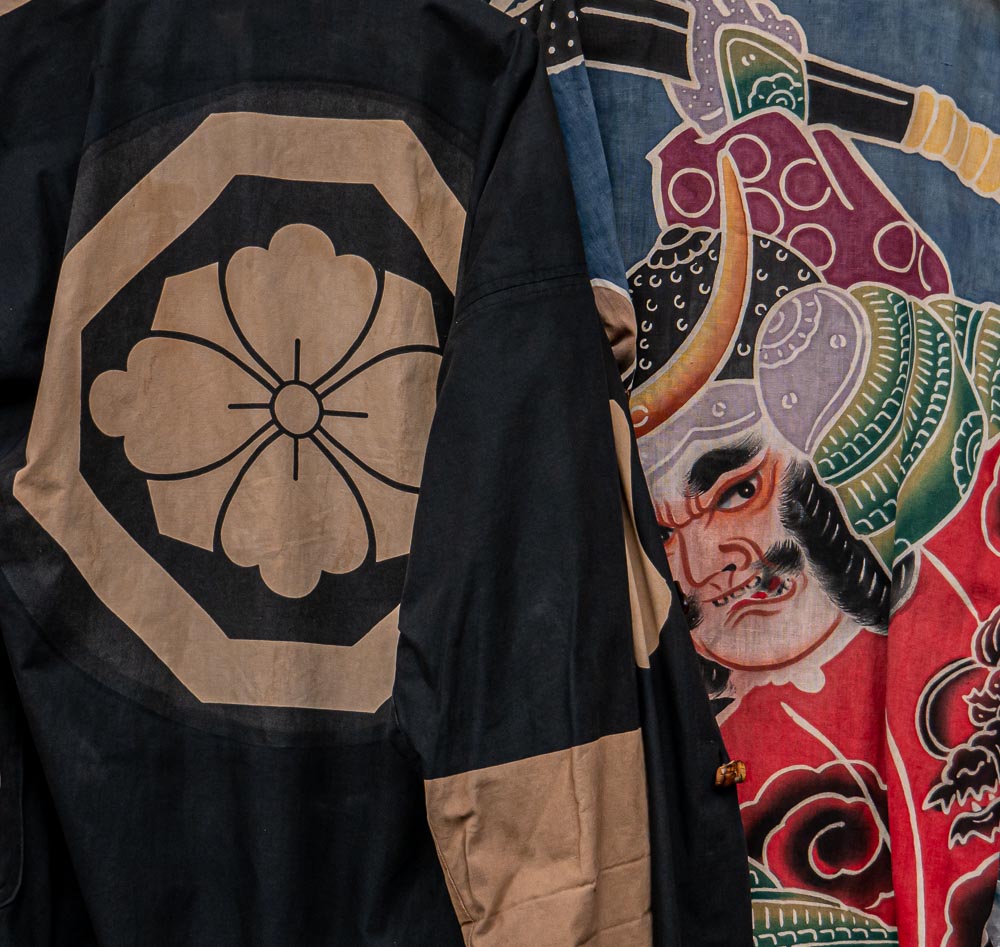 but then I see the head, perhaps detached from his body by the above-mentioned swordsman, who doesn’t look happy at all, 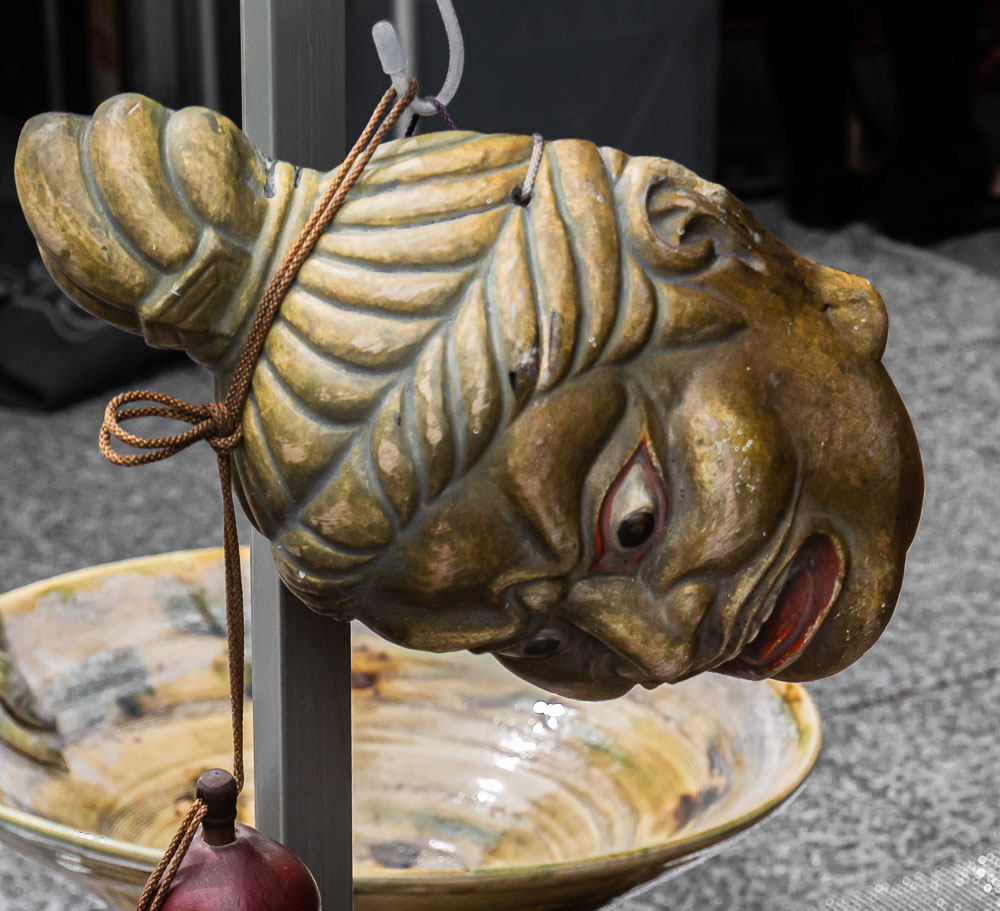 and these guys who look perpetually displeased with life. Don’t mess with me! I’m not in the mood!

About this time we come to the man and his monkey. But perhaps I should say the monkey and his human. Oh I imagine some people will probably have words to say about animal cruelty, and that there shouldn’t be performing monkeys, but how is it different from training a dog, or a horse? No one objects to that. I know, I know, dogs and horses have been domesticated, which puts a different slant on things, but I wonder who it was that did that hmmm? Speaking of domestication, the latest research is indicating that cats probably domesticated themselves. Of course they did.

Anyway, I think this human has had his monkey from when it was a tiny baby, and the love between the two is so palpable,

and the monkey looks so healthy that it makes me smile. 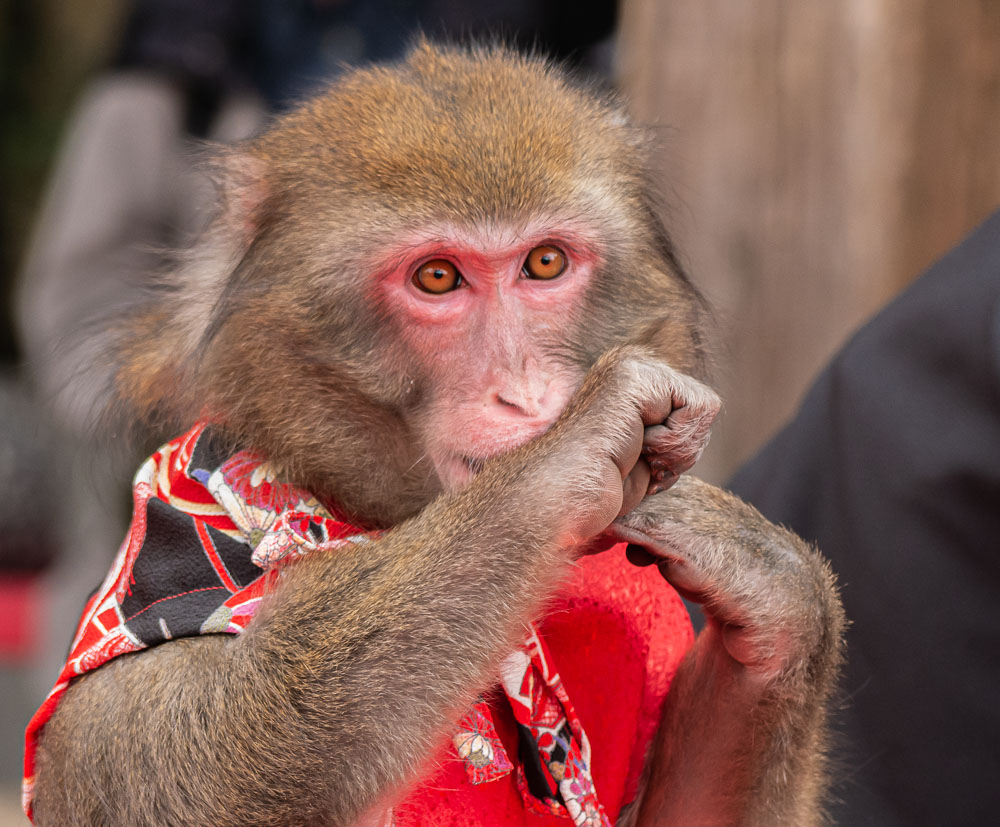 It’s such a delightful performance. 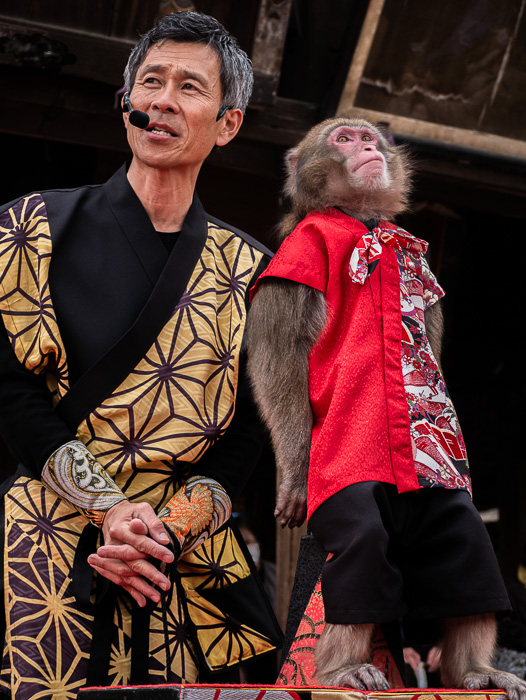 It doesn’t matter that I don’t understand a word of what the human is saying, the monkey says it all in his own clever way, and when it’s time to bow, he bends at the waist so low his head is on the ground. The whole audience laughs and claps.

Kitano Tenmangu flea market has the feel of a small-time festival, and the crowds grow as the day goes by. 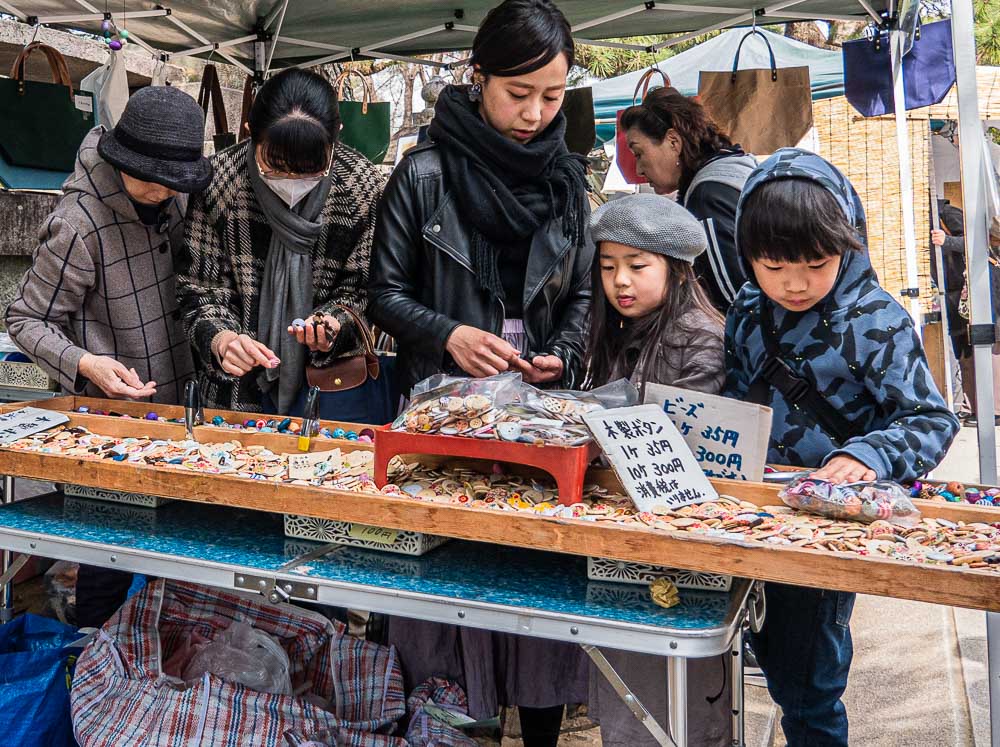 and bolts of cloth,

and locally designed and made clothing.

plants are bought for the garden,

and of course there is food – some to take home,

and some to eat so you have sustenance to continue shopping. 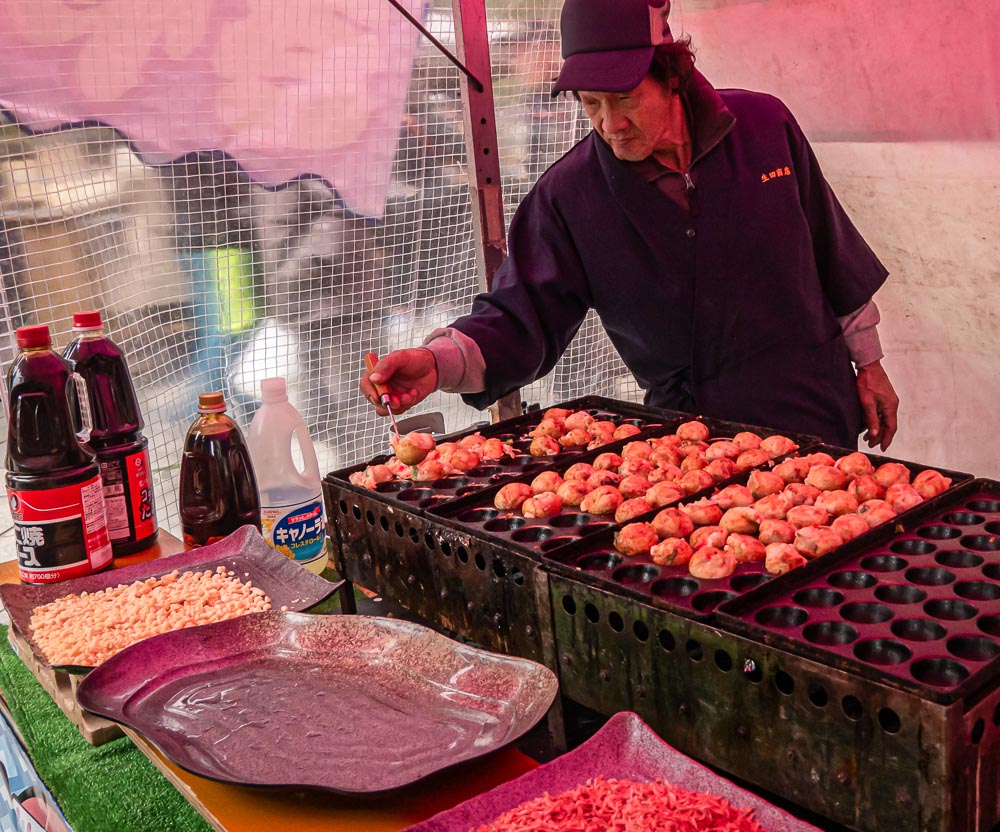 Yakisoba, takoyaki, okonomiyaki, and crepes; so many choices from a multitude of street food vendors.

The whole thing is a vibrant wonderful cornucopia – of food, of people, of beautiful things, and of the minutiae of life. There are over one thousand vendors; people are spoiled for choice. I can imagine that if I lived in Kyoto I’d be at this mini carnival every month poking around for bargains. You never know what you might find, right?

Before I finish this, I just want to whizz over to Nishiki Market. I’ve written about it before, when I was there on a solo trip, but on this second visit to Japan I wanted to share it with Don. And I want to share with you a handful of the photos I took on this second visit.

Nishiki, a narrow street of five covered blocks with a ceiling of rainbow windows,

is known as the kitchen of Kyoto. It is here that you can buy anything food related – cookware, dishes, knives, chopsticks, and of course food, most of which is unfamiliar. 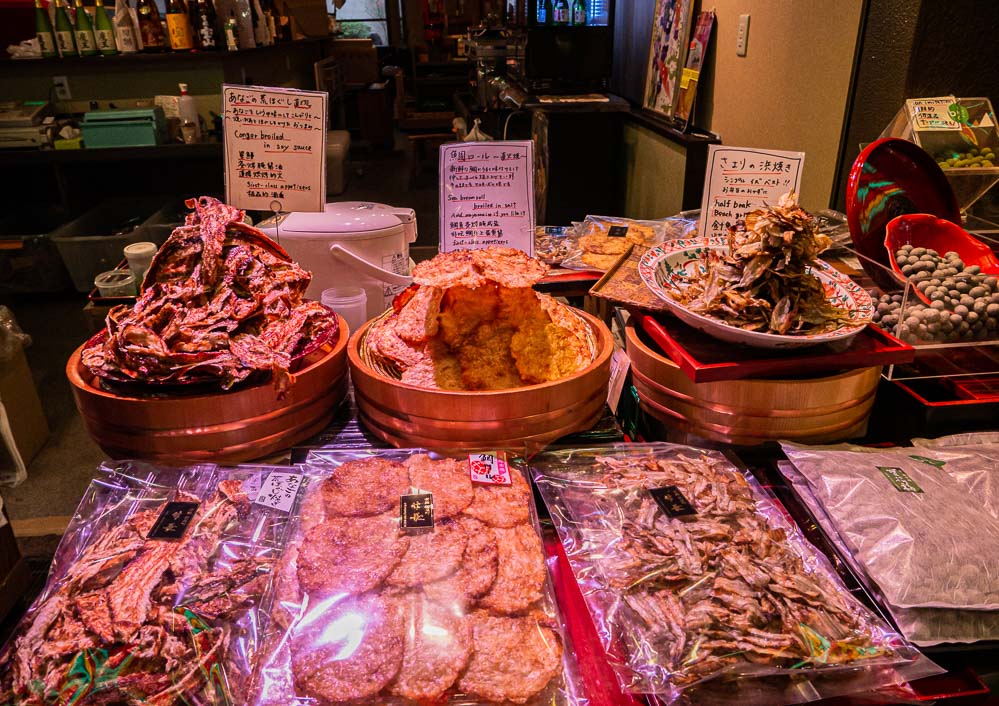 There are also plenty of street food vendors to make sure you don’t go hungry while you shop, 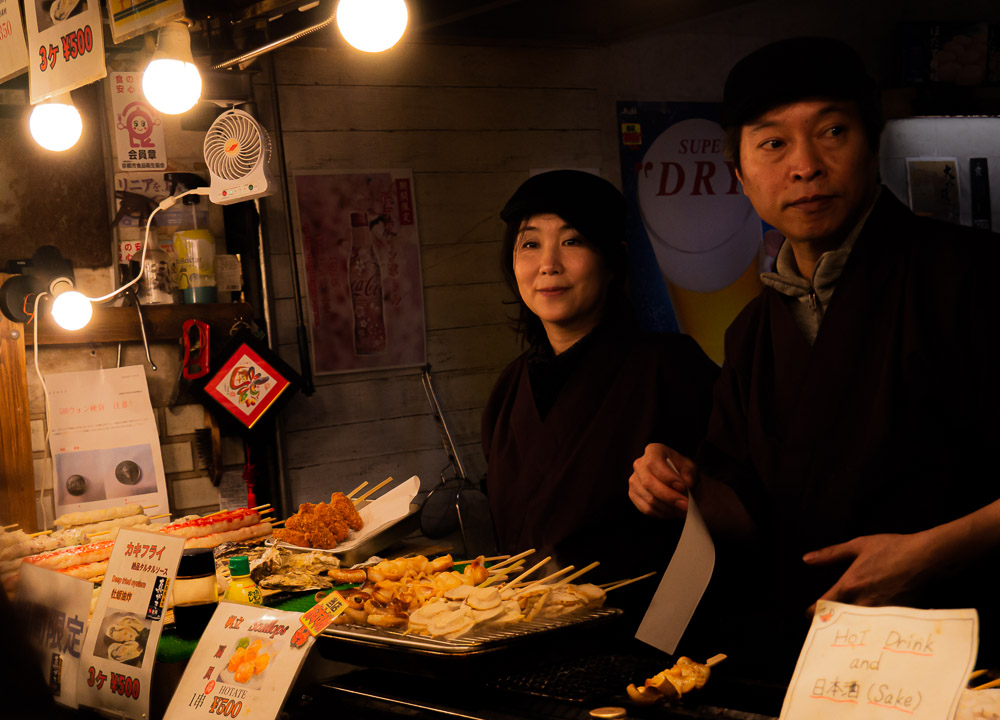 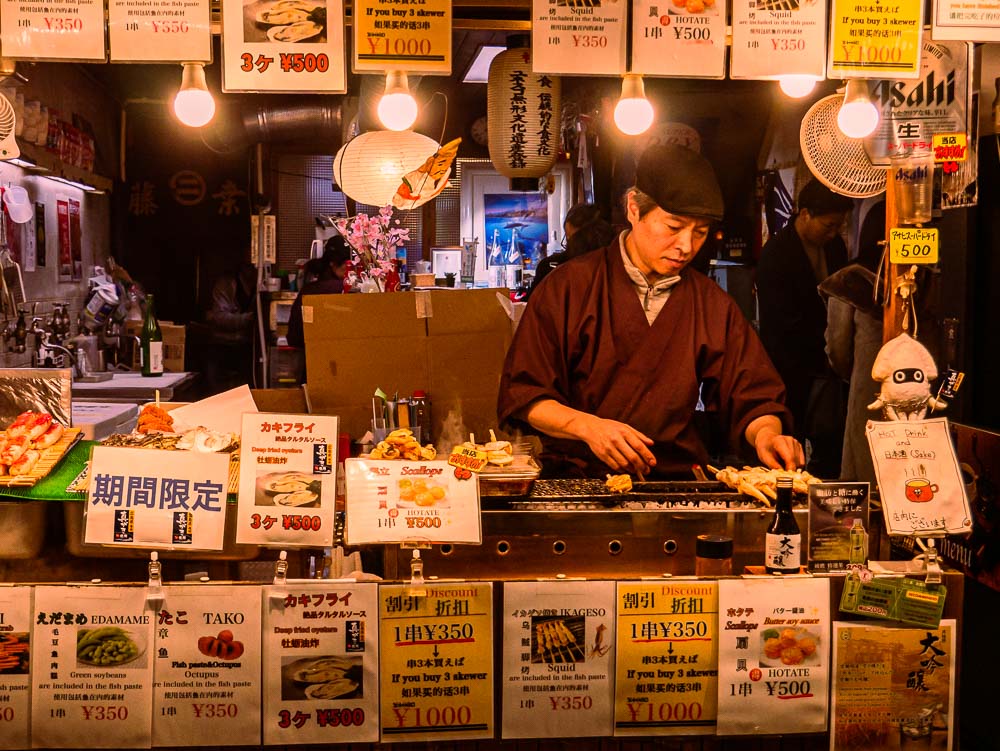 and these two ladies handing out tea samples in beautiful pottery cups. Because it’s Japan no one steals the cups.

And I must share that there is also a standing sake pub. Unless you try too many samples in which case it might become a lying down sake pub. 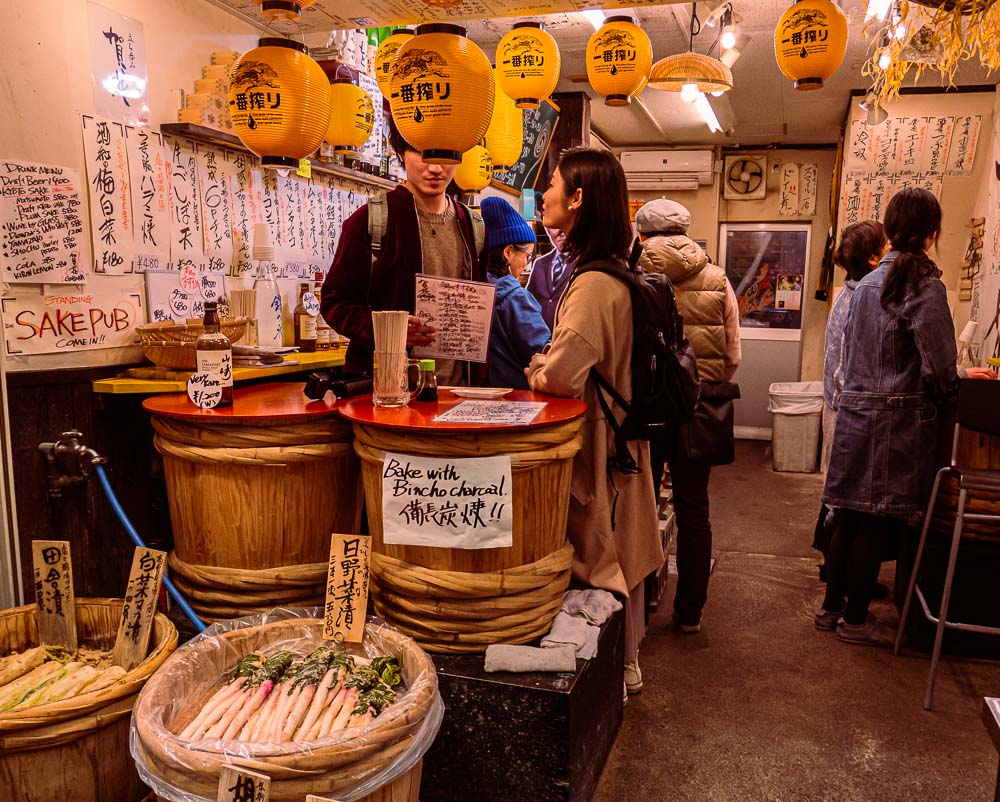 Nishiki began life in the 1300’s as a wholesale fish market. Over the years it morphed into a retail market selling primarily foods, but also various other goods. There are hundreds of shops and restaurants, many of which have been in the same family for generations, and the market is now a long-standing fixture of ordinary life in the city. I think it should also be included on your list of places to explore if you ever get to Kyoto, especially if you catch a rainy day. Nishiki is real life.

Markets are my among favourite places to visit in new countries. Not the tourist markets selling souvenirs, which have their place, but the local markets where you get a glimpse into the regular life of the people of the country. Both Nishiki and the flea market, neither being a promoted or curated tourist destination, and both being much frequented by local people, gave us a hint of the ordinary life of the people of Japan. So similar, and so different from what I am used to. And then we were off to the geisha performance, which I’ve written about previously, and which is about as far from ordinary life as you can get.