11-14 August 2020
So the five of us are sitting around on some bleachers in the shade, intermittently watching a cricket game taking place way off in the middle of the field in front of us. Earlier the other three had been to the local Farmers’ Market and we’d met them afterwards at a nearby café for coffee and a treat at sidewalk seating in the blazing sun. When we were done we moved on to the bleachers in the shade, conversation flowing freely the way it does between long-time friends.

We’ve all known each other for more than twenty years and gradually over the past few weeks have started to create a “covid bubble” together. At first it was socially-distanced outside dates, and definitely no hugging or food sharing, but still it was so good to have face-to-face contact again. Then some quick occasional hugs, which we still don’t do every time like we used to, and then some careful food sharing (no double-dipping!) but there on those bleachers we hatch a plan to take the bubble to a whole new level.

L mentions she’s going to Whistler for a few days with another friend I’ll call J. She’s been offered the use of an apartment owned by yet another friend. Oh what a lucky world we live in to have friends who own an apartment in Whistler! She says she doesn’t think J will be able to come so would M and R like to join her. It’s one of those moments where the conversation is kind of unstoppable. I don’t remember if Don or I chime in saying us too (highly likely), or if one of the others says why don’t you come too? Either way we’re in with a resounding Yes! No matter that there will be five of us squished into a 370-square-foot, one-bedroom, apartment. Oh we try to be sensible and talk about leaving windows open and fans on for good air circulation and that anyway we’ll be outside all day. But the plan is hatched, the seed is planted, and excitement rules! The idea of being able to get away for a few days is intoxicating.

It’s not that we necessarily want to travel at this time of the year, but the fact that we can’t informs our daily life in an amorphous way, always low-grade in the background, so ideas of trips aren’t even really allowed to surface, and there’s a niggling curiosity of what would surface if we were free to go. So the idea of a trip to Whistler for a few days sounds as exciting as a trip to Europe.

Of course L’s friend has first dibs. We have to wait for her decision. And then the email arrives! The friend has declined. We are good to go!

I first went skiing at Whistler in 1974 I think it was. All I remember is skiing in a whiteout. I may have been once or twice more but I don’t remember. Since then Whistler has become North America’s largest ski resort, with winter skiing and snowboarding, and summer hiking and mountain biking. Its pedestrian village has won numerous awards and it has been voted among the top destinations in North America by major ski magazines since the 1990’s. Plus it was one of the major locations for the 2010 Winter Olympics, which prompted a significant upgrade of the Sea To Sky Highway between Vancouver and Whistler, for which us locals are extremely grateful.

It is during the two-hour drive to Whistler, too long after we’ve left home to turn back, that I suddenly realise I’ve forgotten my camera . . . . . ! Who forgets their camera?! So, sadly, phone photos it is.

I’ve read of Whistler described as glamorous and youthful with an adventurous soul. Whatever. We Boomers are coming to town to have fun! We may not always be glamorous, but we’re definitely youthful and adventurous.

Don and I arrive first, around lunchtime, and spend an hour or so figuring out the sleeping jigsaw. M and R will have the double bed in the bedroom, and L must have the double futon because Don and I need a bed each. In over 20 years of living together we’ve never figured out how to comfortably be in the same bed and still actually sleep. We quickly realise that as soon as the futon is extended it pretty much fills the living room so there’s no room for another bed in there. We’re also aware that all five of us need a clear path to the bathroom during the night. The solution is exactly as the owner had suggested – one in the hallway and one in the kitchen. I get the kitchen, so cosy and cocooned,

and Don gets the equally cosy hallway. 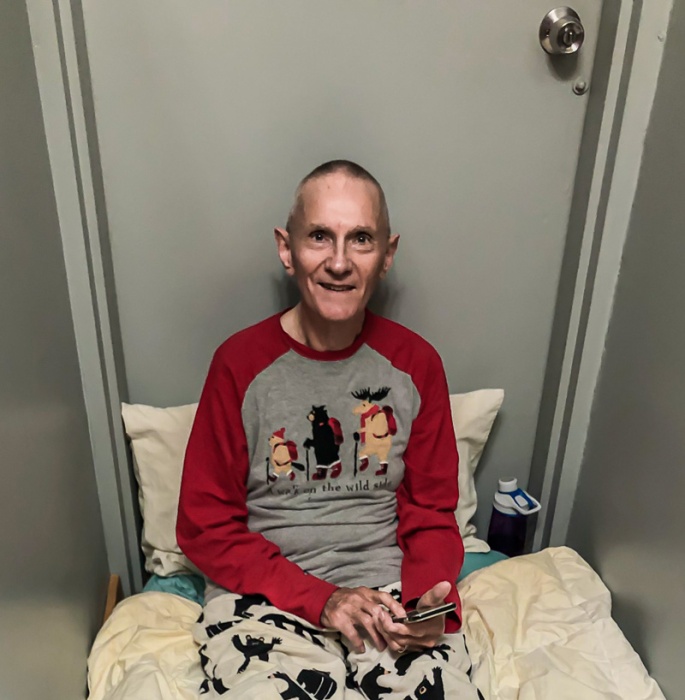 By late afternoon we’ve all arrived, have unpacked as much as we can, crosschecked the sleeping arrangements, and found a nearby restaurant within easy walking distance for dinner. We’d hoped to sit outside but the wait for patio seating is over an hour so we settle for a table indoors that is quite separate from all the others and partitioned from them by a huge fireplace. Such is today’s reality – only go indoors if you can be separated from everyone else. The servers all wear masks.

The sleeping arrangements work perfectly! After packing away our beds I cook eggs for breakfast in the tiny kitchen while a couple of the others take care of making toast in the bathroom where the outlet is on a different breaker from the hotplate.

And then we set out exploring. After a short walk from the village car park, crossing a pearl blue glacier-fed stream, 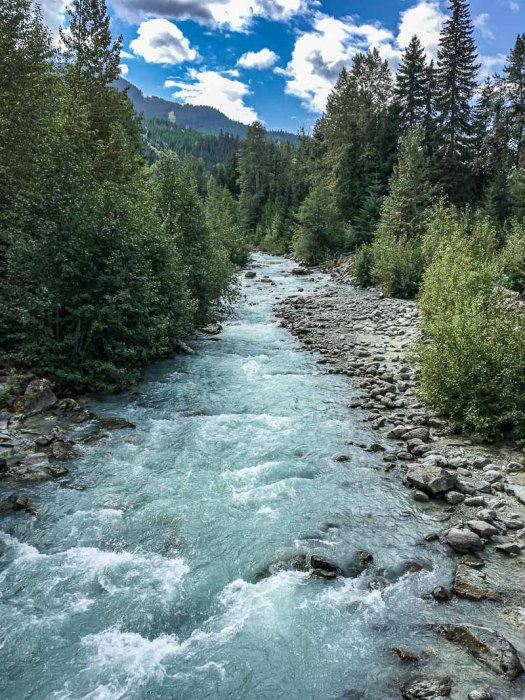 we take the gondola to the top of Whistler mountain 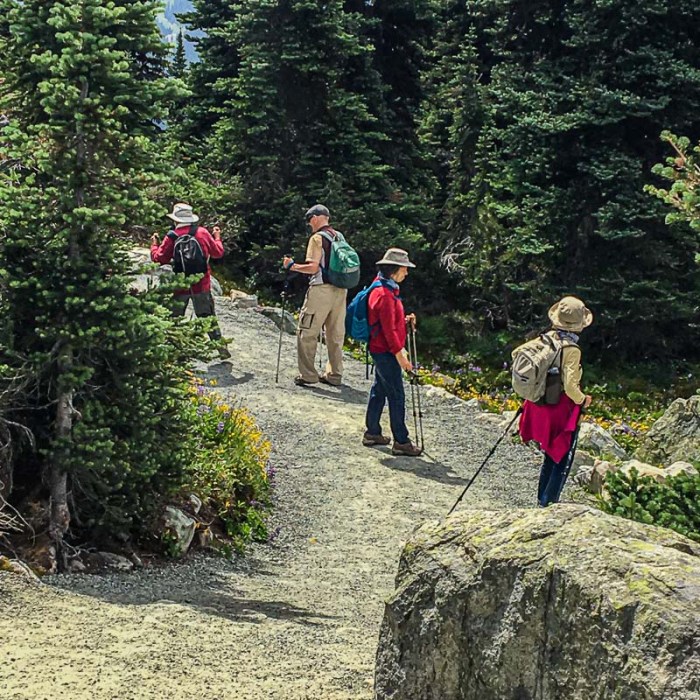 It’s a warm shiny sunny day and we are filled with a lightness reflected back to us by the clear mountain air. All around us summer flowers are carpeting the meadows,

and beyond them blue mountains, always the mountains, defining the space with their grand adamant beauty.

They are the main characters on this stage, with the trees and flowers there as supporting players to present them. The mountains may seem to be the backdrop, but in truth they never let us forget that they are the main event.

It’s the marmots and whiskey jacks that make me really regret forgetting my camera. The phone is okay for landscapes, but not for wildlife at a bit of a distance, though I do get a blurry pixelated shot of a whiskey jack when it lands on M’s hand. 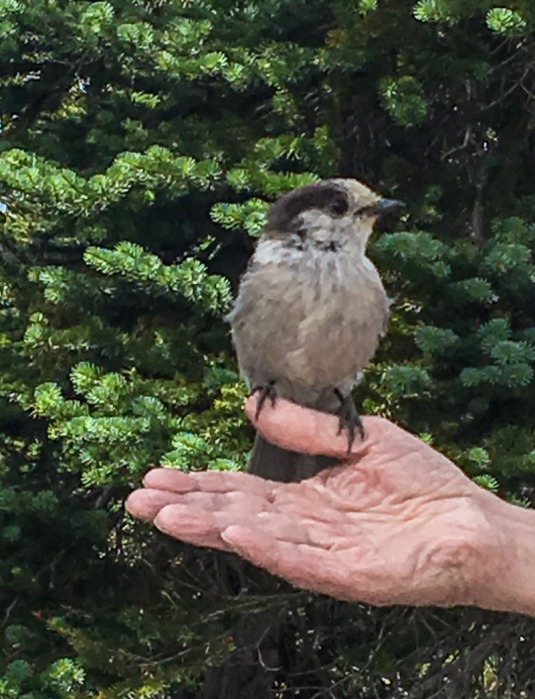 Feeding in amongst the grasses or sunning on the rocks we see several hoary marmots, their loud no-nonsense squeal being the origin of the name Whistler. 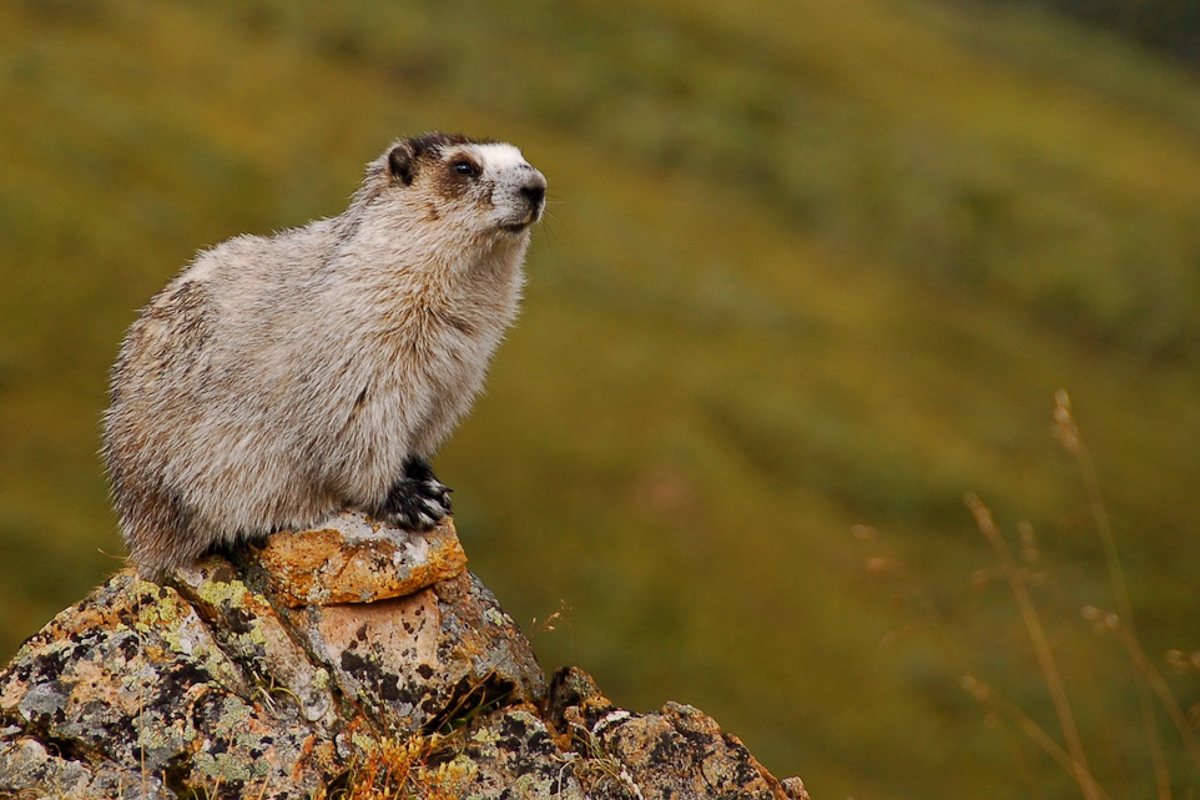 We grab a sandwich and a drink for lunch from the huge but much-reduced ski-season cafeteria. Almost all of it is closed off and only minimal take-out is available, another sign of life in the time of Corona.

And then we ride the Peak 2 Peak. The Peak 2 Peak gondola from Whistler Mountain to Blackcomb Mountain spans 4.4 kilometres (2.75 miles) with supports only at either end. It is the world’s longest unsupported gondola span, and is the longest and highest gondola in the world. We sit in awe during the eleven-minute ride as the carriage travels first downwards before ascending again.

From the top of Blackcomb we hike partway along the Alpine Loop Trail. 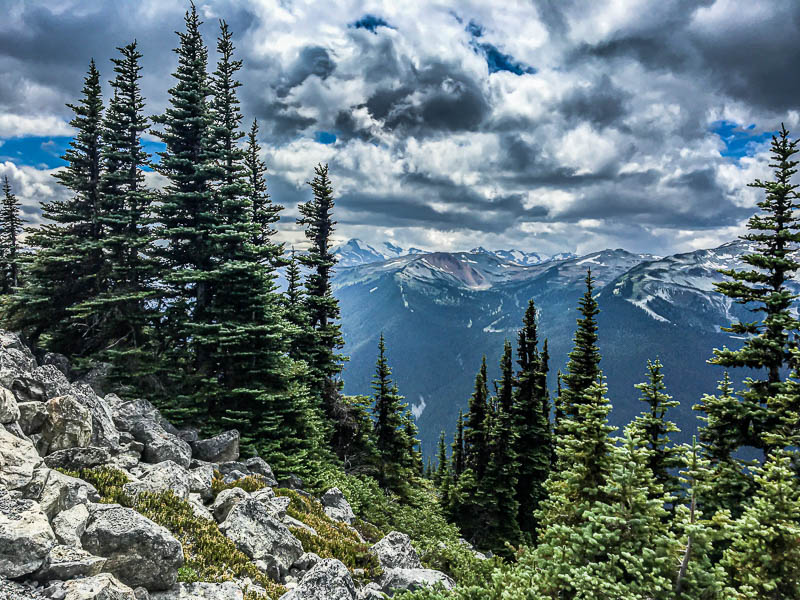 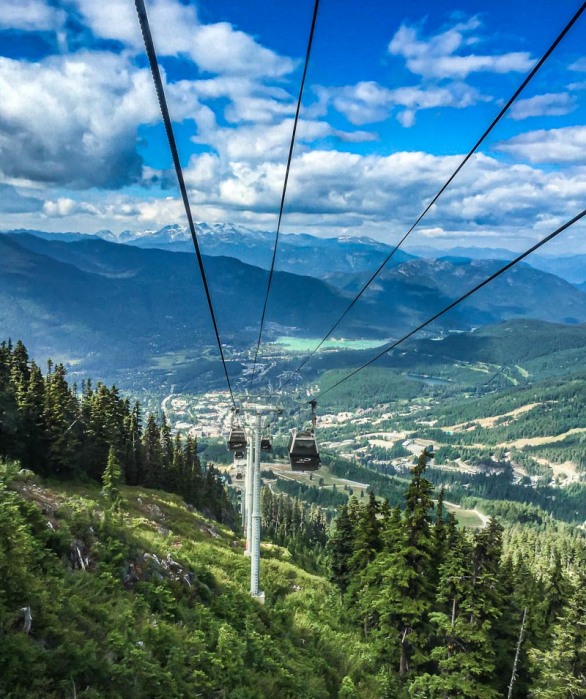 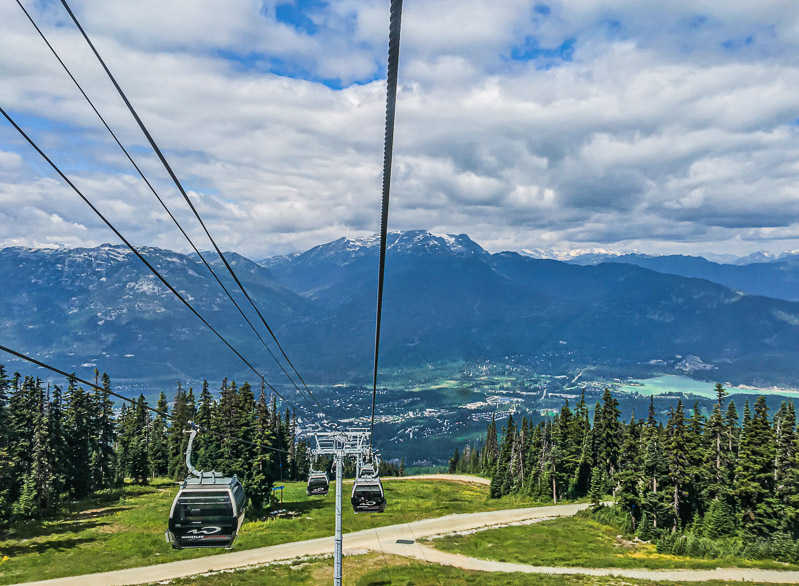 Gin and tonics and appys in the village,

and back at the apartment take-out pizza and salad for dinner. All is right with the world.

The apartment is located in Creekside, four kilometres south of Whistler Village and on day two we walk to Whistler, by lakes laughing with people swimming and picnicking, 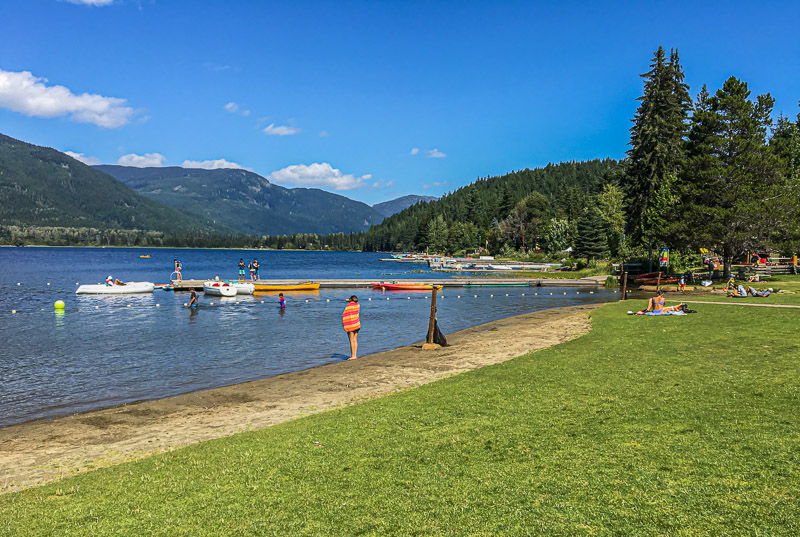 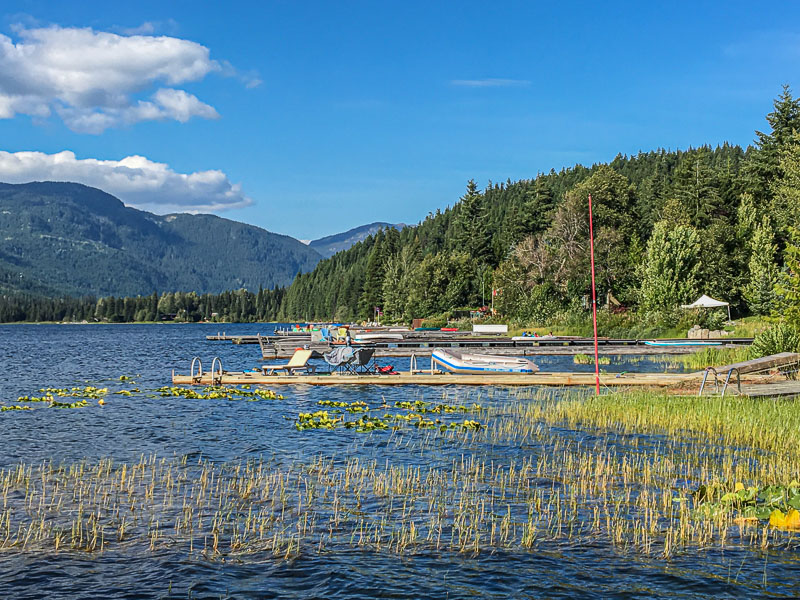 through suburban areas, and along shaded golf course perimeter pathways. Lunch in the village before walking back

and somewhere during the course of those two days we manage to somewhat successfully take a selfie of all of us without a selfie stick.

Next morning the others go to Whistler’s Audain Museum then head back to Vancouver. Don and I go for a walk around another of the valley lakes before driving home.

In normal times over two million people visit Whistler each year. It’s that kind of place: a resort town that is a year-round playground. I’m so glad we got to go play. 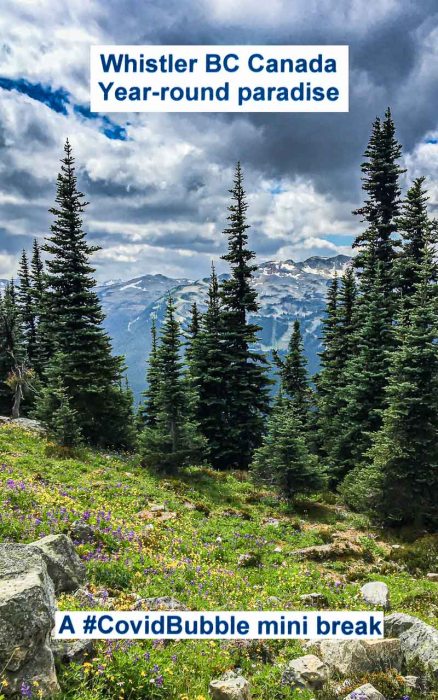