9-15 May 2018. In 1950 a disturbed 22-year-old novice monk burned down the five-hundred–year-old Rokuon-ji Temple in Kyoto, and then attempted suicide. He was arrested and imprisoned, but later released as mentally ill, suffering from schizophrenia and a persecution complex. He died in 1956 from tuberculosis.

The temple, originally a retirement home for Shōgun Ashikaga Yoshimitsu, was converted to a Zen Buddhist Temple upon his death in 1408 as per his instructions. In the ensuing years it was burned to the ground and rebuilt several times, including twice during the Onin (civil) war of 1467-77.

And then it was burned to the ground by the deranged monk. In 1955 it was rebuilt as a close replica of the original.

Today the temple is known as Kinkaku-ji, or the The Temple of the Golden Pavilion, and it is one of the most iconic sights of Kyoto, and one of the most popular sites in all Japan. It is designated as a National Special Historic Site, and is one of seventeen locations that make up the Historic Monuments of Ancient Kyoto, which are World Heritage Sites.

But enough with the history lesson and the official designations. Kinkaku-ji is one of the most beautiful buildings I have ever seen. The millions of milling tourists make no difference, and even having seen photos before hand, I am still not prepared for the shimmering splendour of it. 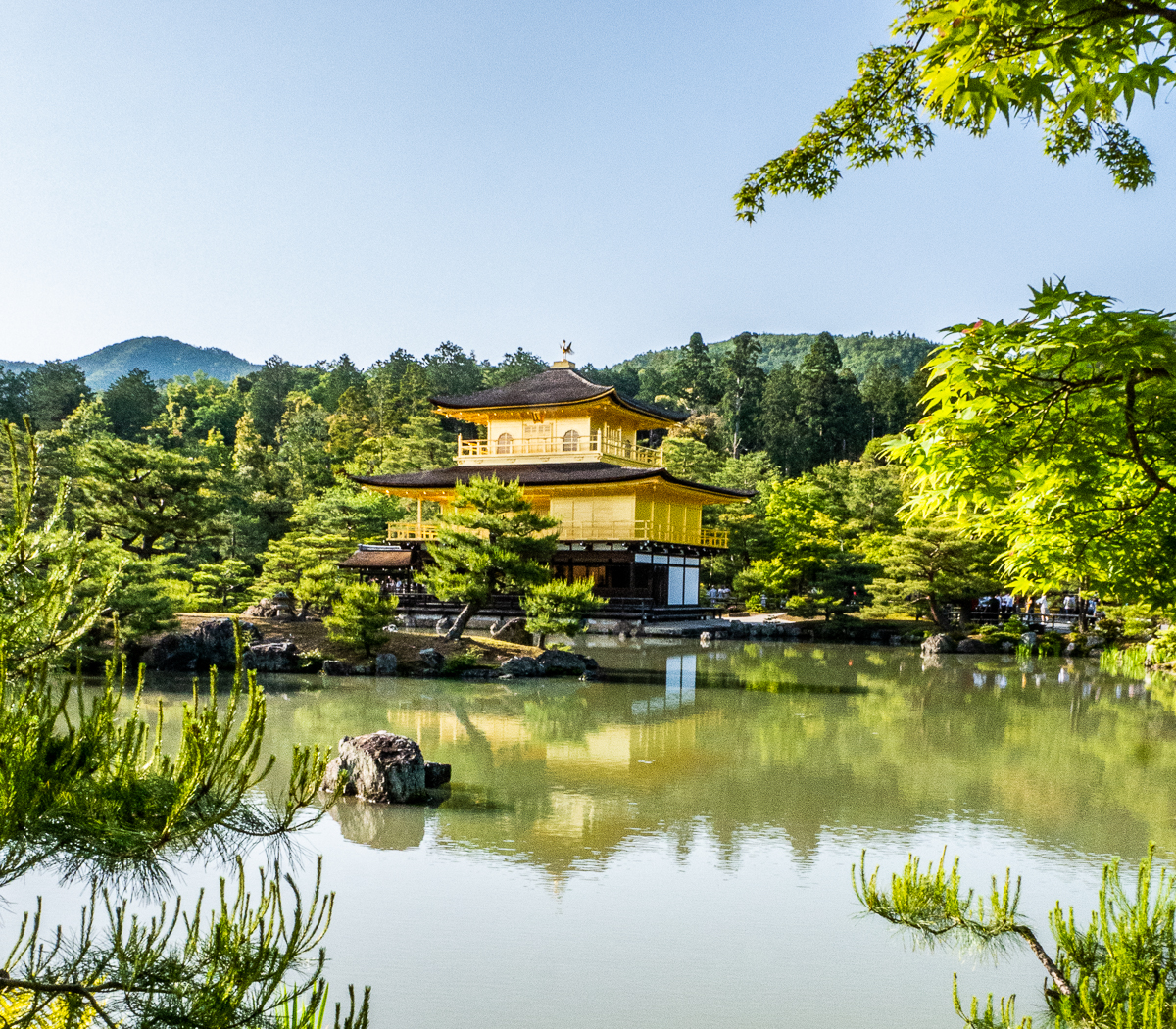 The top two floors are covered with gold leaf and the entire building is reflected in the pond in front of it giving double the beauty. The original pavilion was built during a period that greatly relied on visual excesses, but that was not the only reason for encasing the exterior of the building in gold leaf: gold was believed to mitigate and cleanse any negative energy or thoughts concerning death.

The pond itself has small islands with pine trees, 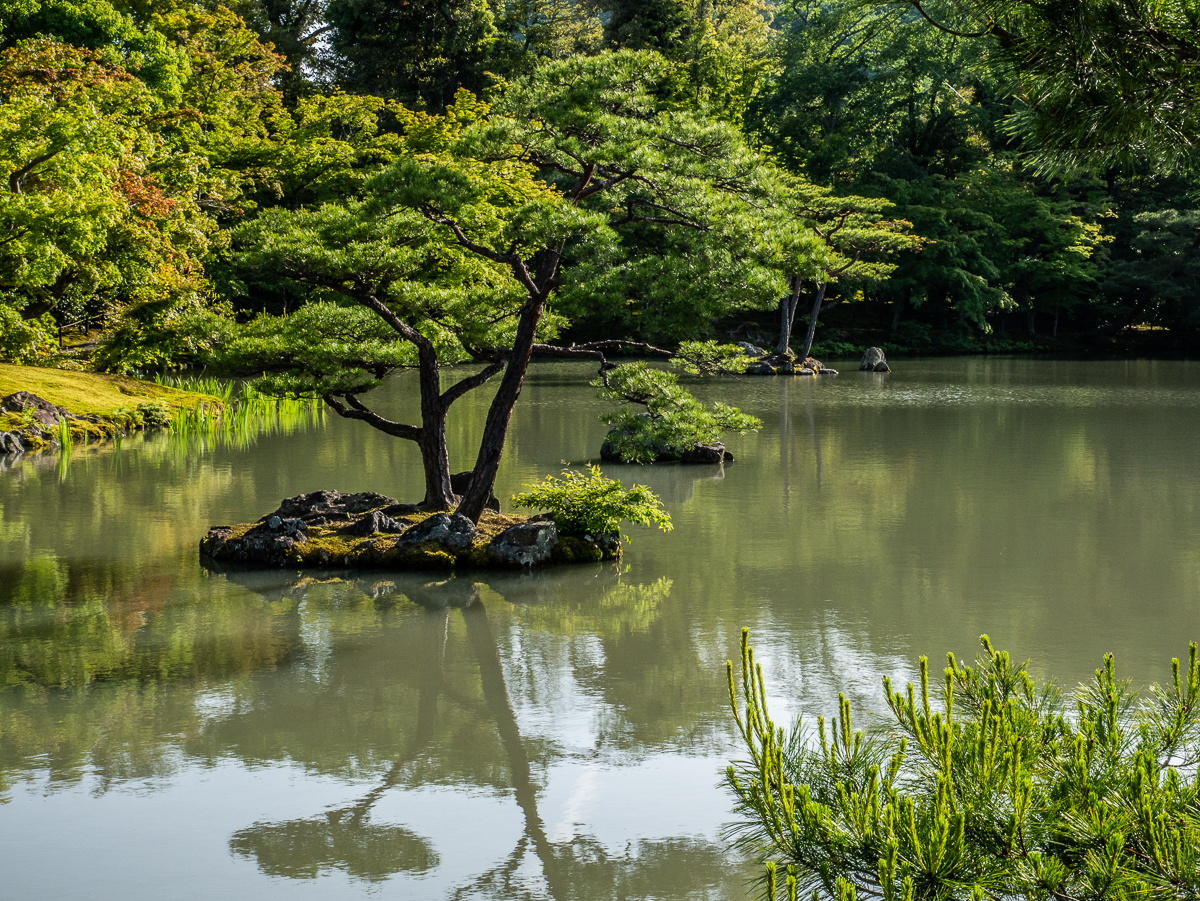 and the surrounding garden is the perfect serene enhancement to showcase this exquisitely simple and lovely building.

I photograph and stare, and then stare some more, filled with wonderment. Slowly I follow the path around, 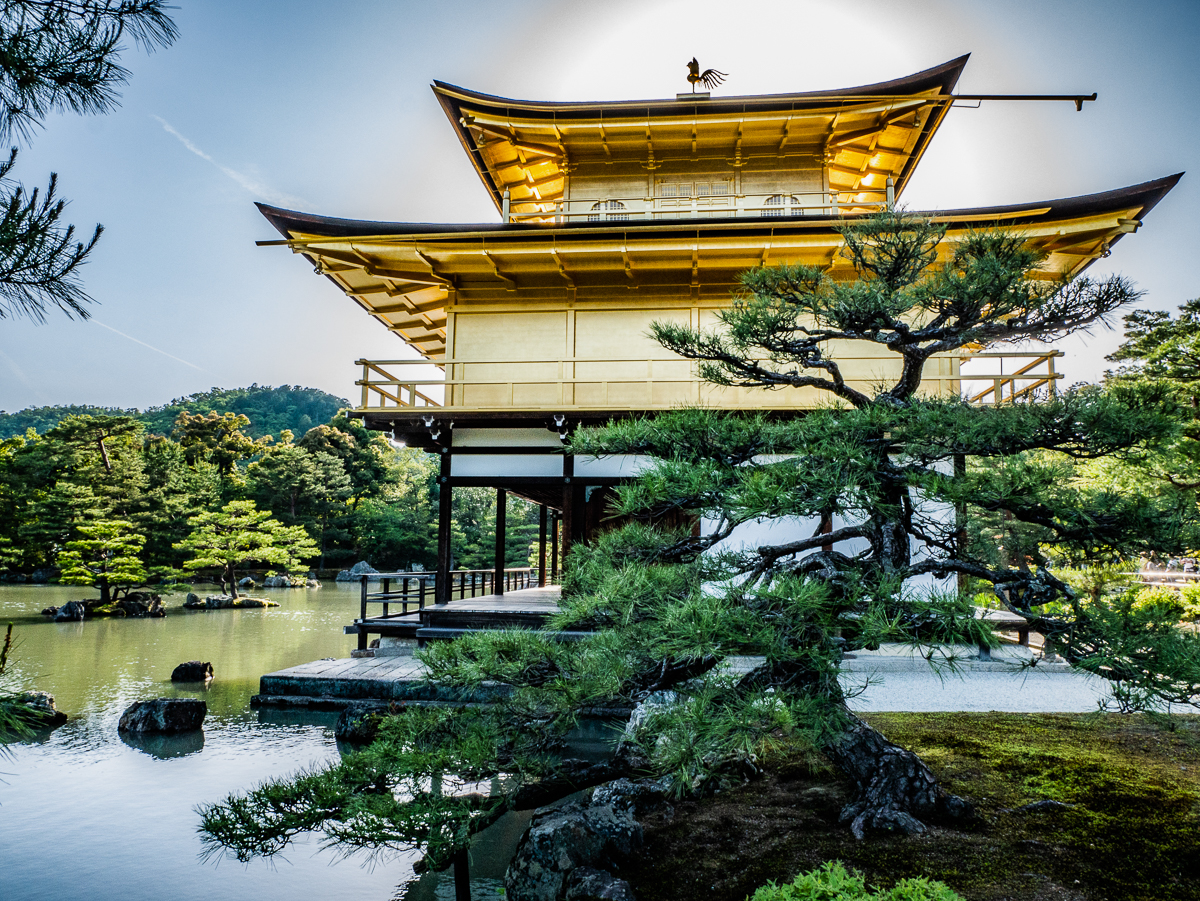 coming on the far side to a different view of the building, 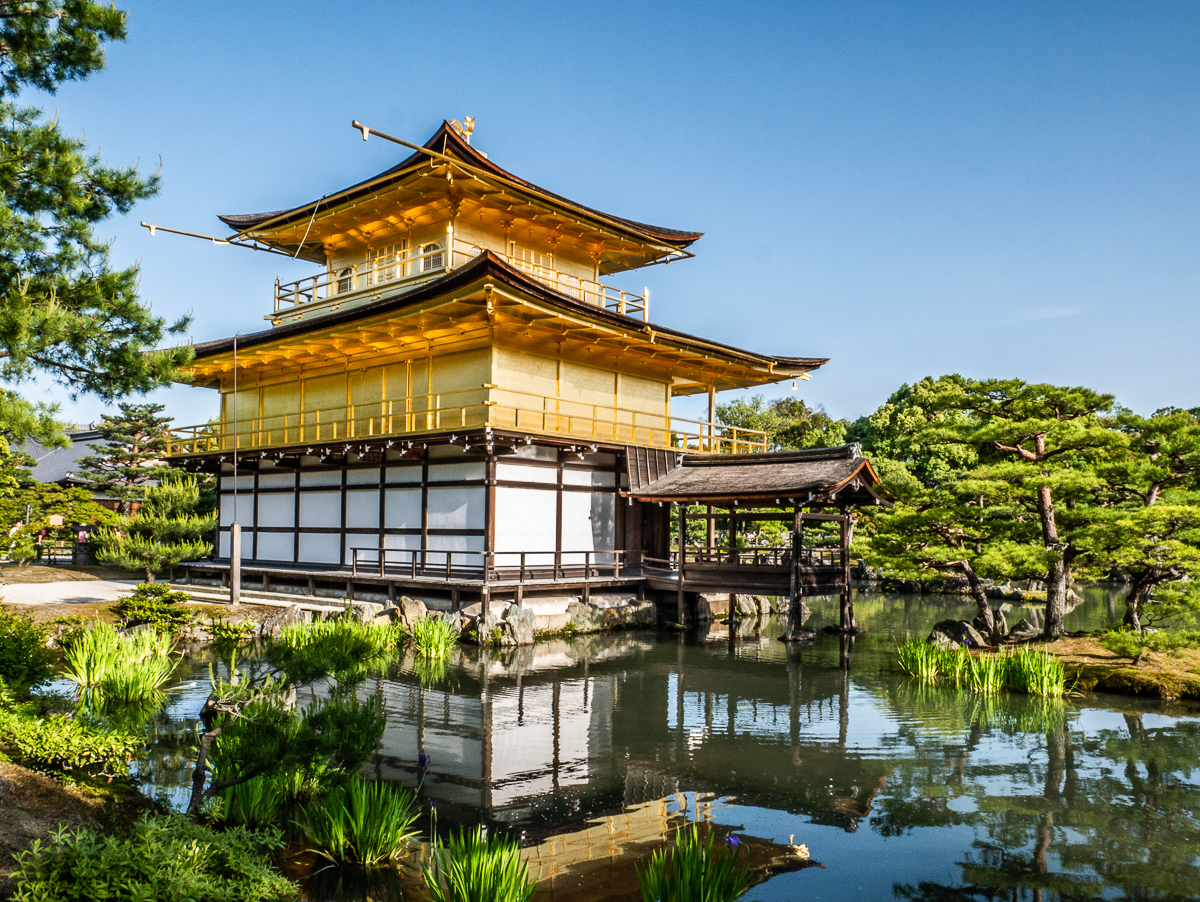 the pond, and the surrounding garden. 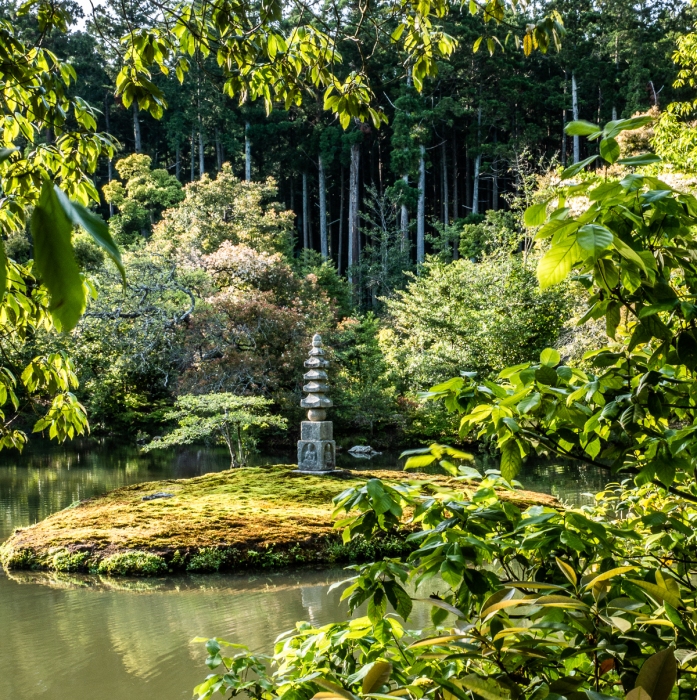 Finally I stroll through the garden, passing a small grotto with a waterfall,

and the sparse simplicity of the head priest’s former living quarters.

I think the young troubled monk did us all a favour. I looked at photos of the building that he burnt down. It had lost almost all of its gold leaf, to the point that it would be difficult for the ordinary viewer to ascertain that there had ever been any, and the old wooden building seemed ramshackle at best. The replacement, built in 1955 is a perfect little gem and an exquisite example of Japanese beauty.

For the first time ever I get up and go out without at least having a cup of tea beforehand! I want to get to the shrine early before the crowds and had hoped to wake at about 5.30 or 6. Instead I wake at 7, wash my face, dress, and race to the hostel’s café. It doesn’t open until 8 so I just leave. First I walk in the wrong direction to the station. I know which way to go, but not trusting myself I ask another tourist in the hostel lobby which way. I head off in the direction he tells me until I realise he thinks I mean Kyoto Station, when actually I mean the Keihan Line station in the opposite direction. Arrrrgh why don’t I trust what I already know?

Eventually I get to the station and get a train to the shrine. When I get off the train I see a couple of tourists coming towards me. Once again I ask which way to go. You’d think I’d just look at the map on my phone, but it’s so new to me it seems easier to ask people despite the arsehole in Tokyo. They give me directions but instead of turning right as they told me I turn left. Once again I’m walking in the wrong direction! Arrrrrgh!

Eventually I arrive at the main gate to the shrine. By now it’s 8.30 and I see that of course I haven’t beaten the crowds. I stop for coffee, which I just about inhale, and it’s about now that I suddenly see myself from the outside: all this striving and rushing all for the sake of getting the shot. I need that shot of all the red torii gates without any people in it. At least that’s what I’ve been telling myself. Spontaneously seeing myself from the outside I laugh and laugh. How silly we can be. I’d made it so important and caused myself so much stress that my head isn’t on straight, not to mention not trusting myself and going in the wrong direction not once but twice! Seeing myself from the outside breaks the spell. The laughter comes deep and naturally. I get present, slow down, and finally start to enjoy the day.

And I get the shot; the classic iconic shot of the red torii gates of Fushimi Inari-Taisha Shinto Shrine. 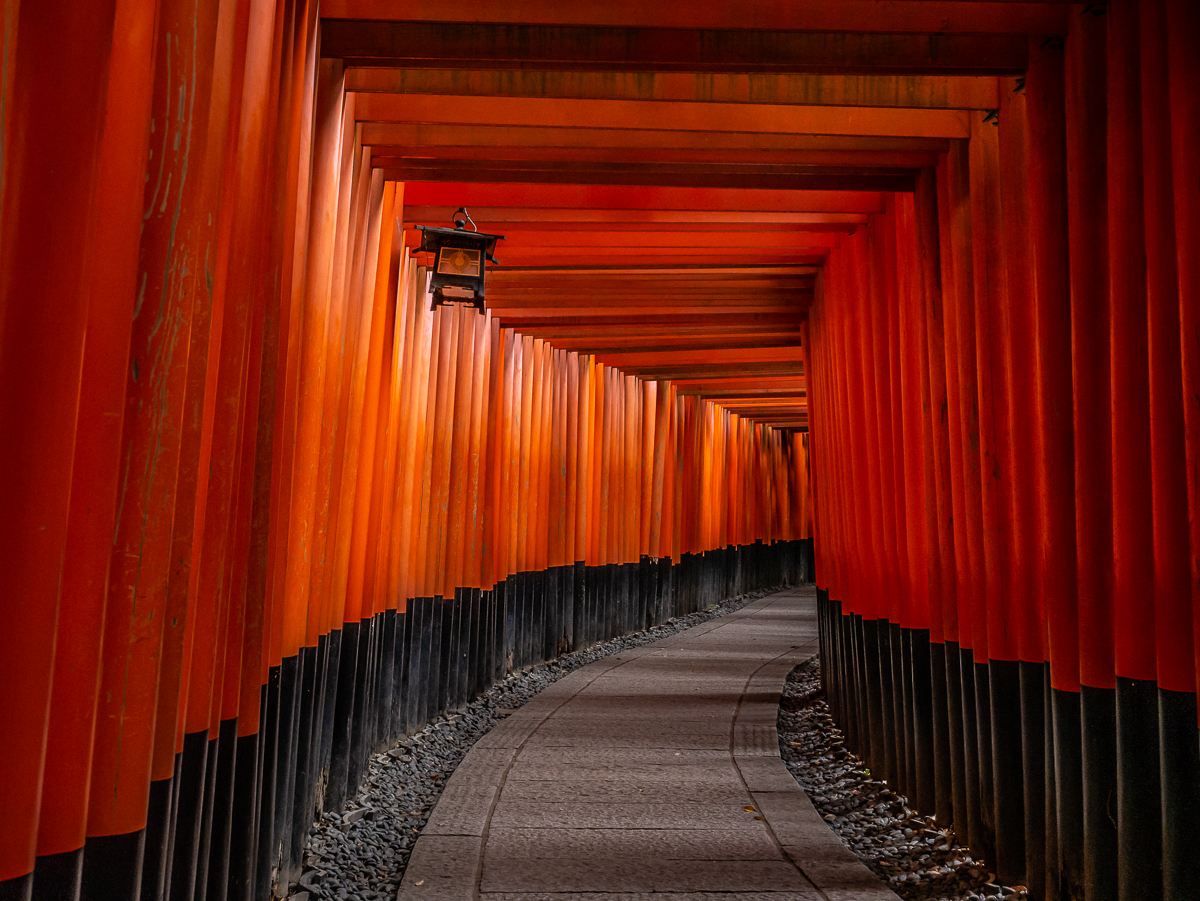 Fushimi Inari is the head shrine of thousands dedicated to the Shinto god Inari, the god of rice and of course also the god of sake, which is made from rice. To get a good rice harvest you need the right amount of rain, but the sun is also needed. The red of the torii gates represents the sun. As the importance of agriculture diminished the deity was enrolled to support business, since any business is also looking for a good “harvest”. Both good crops and success in business signify prosperity.

The main shrine, sitting at the base of the sacred Mount Inari, dates back to 1499.

The entrance is through the imposing Rōmon Gate. 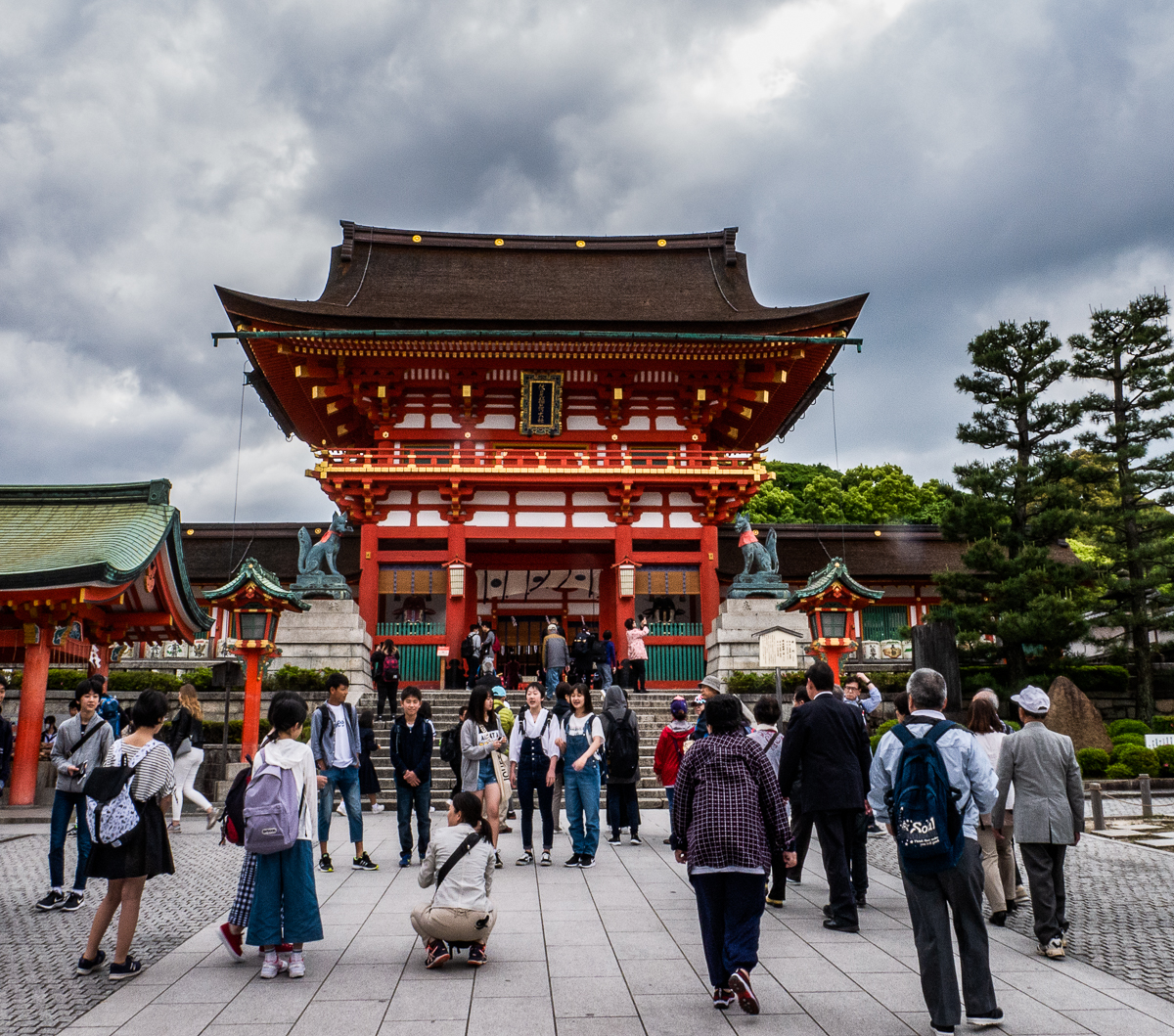 Beyond the main shrine there are dozens of smaller shrines scattered up the hillside reached by four kilometres of trails. This map

shows the trails and the location of the smaller shrines.

It also gives some idea of the number of torii gates there are spread all over the mountain at Fushimi Inari: more than 10,000!

The trails begin behind the shrine with the twin tunnels of gates known as Senbon Torii (or thousands of torii). This is the most photographed part of the shrine, and of course I want my own shots! Given the crowds I’m both astonished and thrilled that I get them. There are breaks in the crowds! It is the last thing I expected, but it is also often the outcome when you let go.

Here is the other side of the gates.

Each is inscribed with the name of the business that donated it in the hopes of receiving good fortune for their business, or in thanks because they already have. Most are from businesses, a few are from individuals – prayers for specific things, or thanks for receiving them.

Every gate is a prayer, or a thanksgiving.

Every now and then there is a gap just wide enough for me to squeeze through into the space between the twin tunnels. From the inside it is an infinite double row of hopes and dreams. 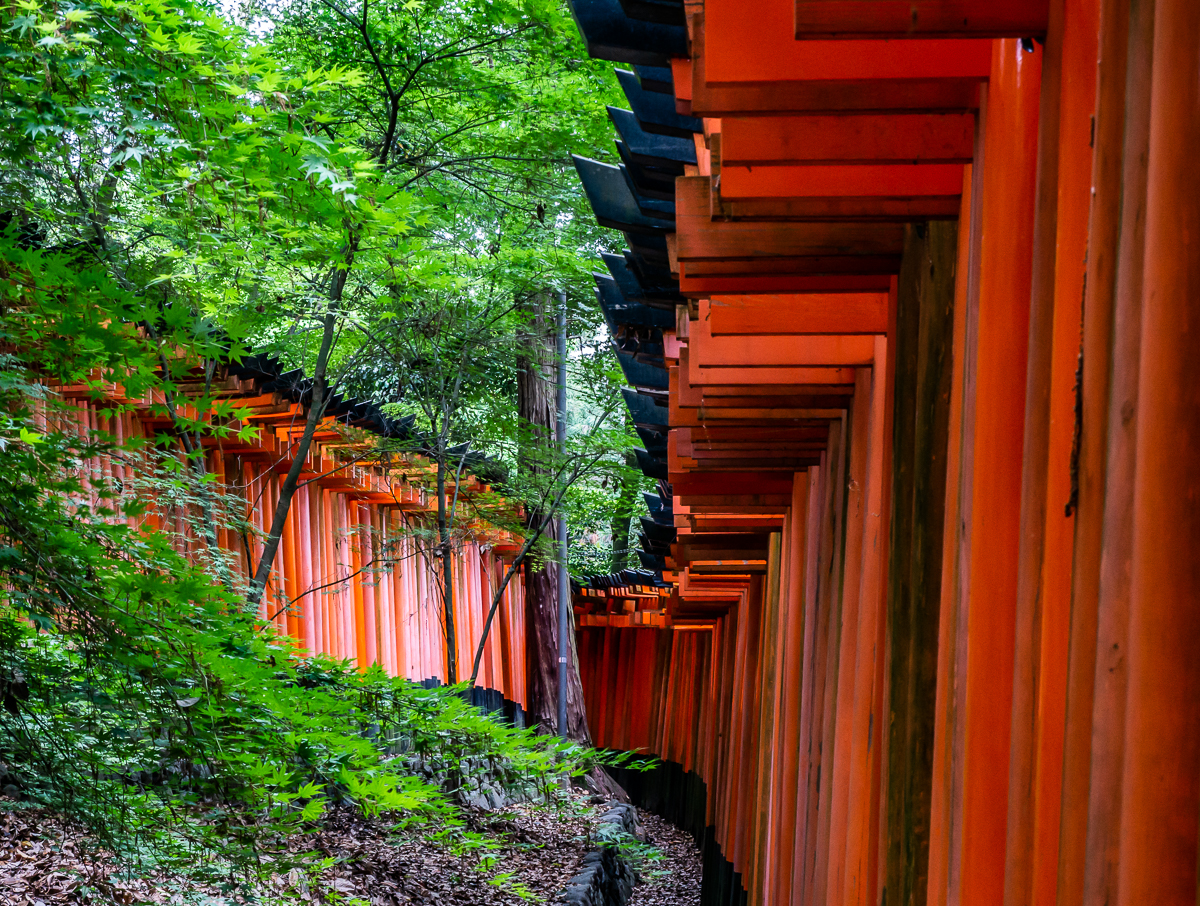 The practice of donating toriis started to spread since the 1600’s. The large gates start at 400,000 yen and go up to over one million yen (US$3,500-11,500). A torii was originally considered an opening to where god exists, hence the large stone torii at the entrance to all Shinto shrines. And hence all these scarlet torii at Fushimi Inari – the hope that each is a gate to the deity.

Beyond the densely packed torii of the twin tunnels, which you can see at the bottom right of the map, I come to the trail that goes up the mountain. I’ve not done my research so it’s a surprise. I find myself on a beautifully wooded trail.

I continue up past a bamboo forest, 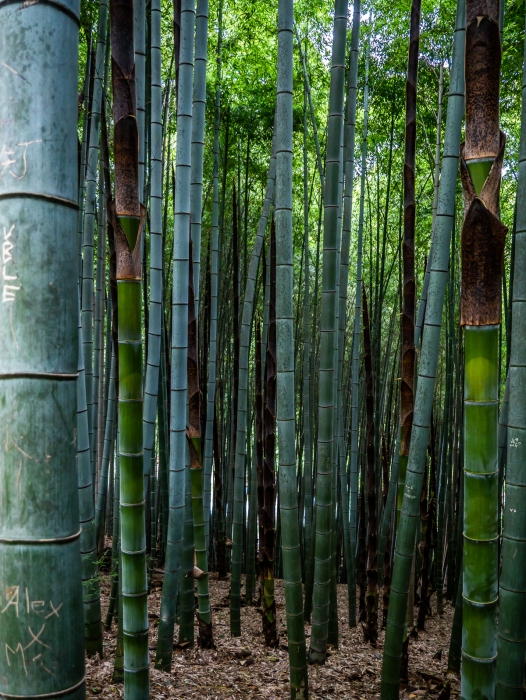 past many smaller shrines, and past occasional gaps in the trees that give hints of the views to come. 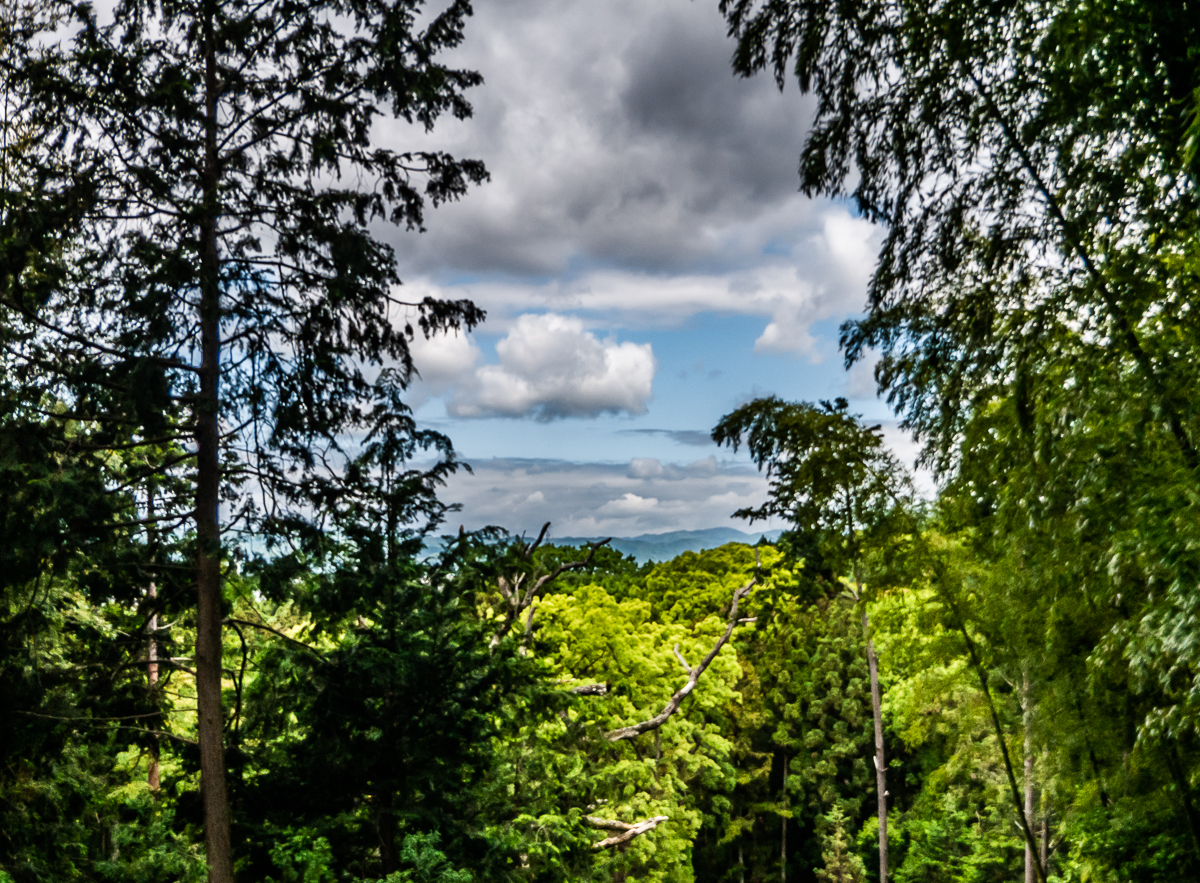 I don’t go to the top but instead go down a different trail back to the main shrine. Now I discover what the crowds are really like at the shrine, and it’s not even a weekend or holiday.

Apart from the many tourists there are hundreds of school children on a cultural excursion. 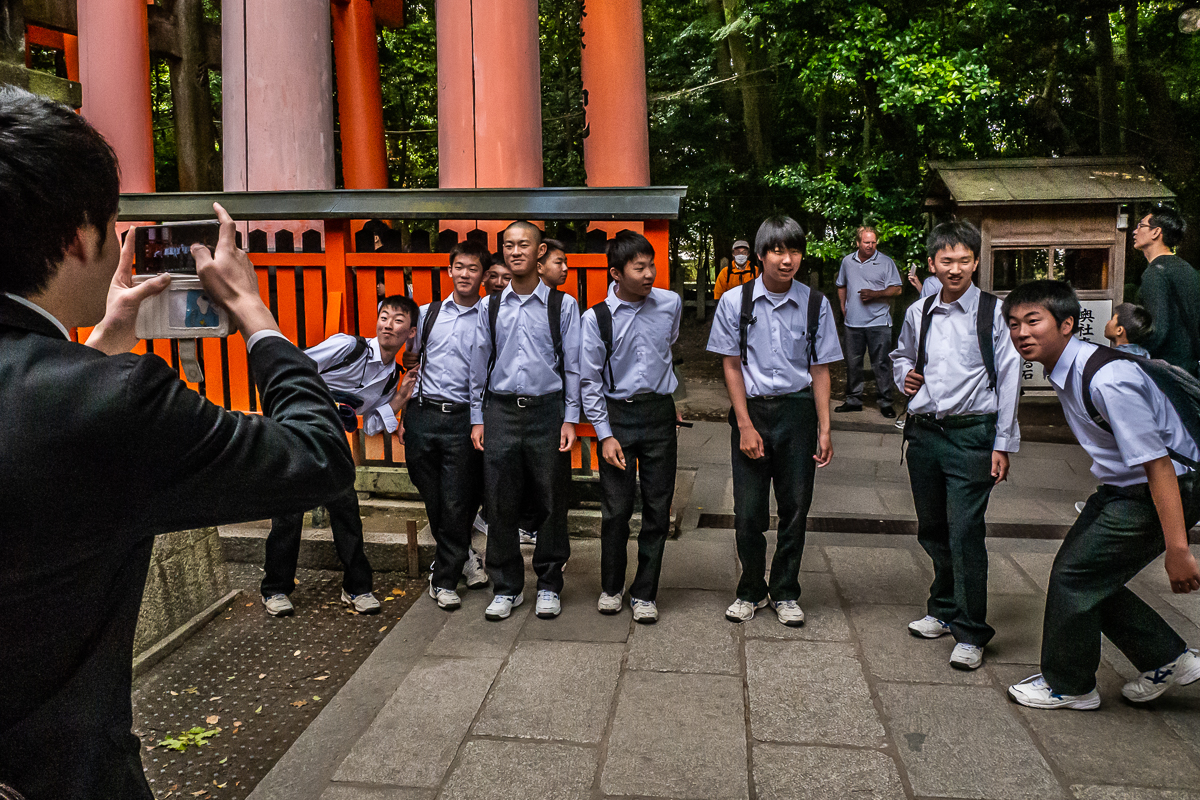 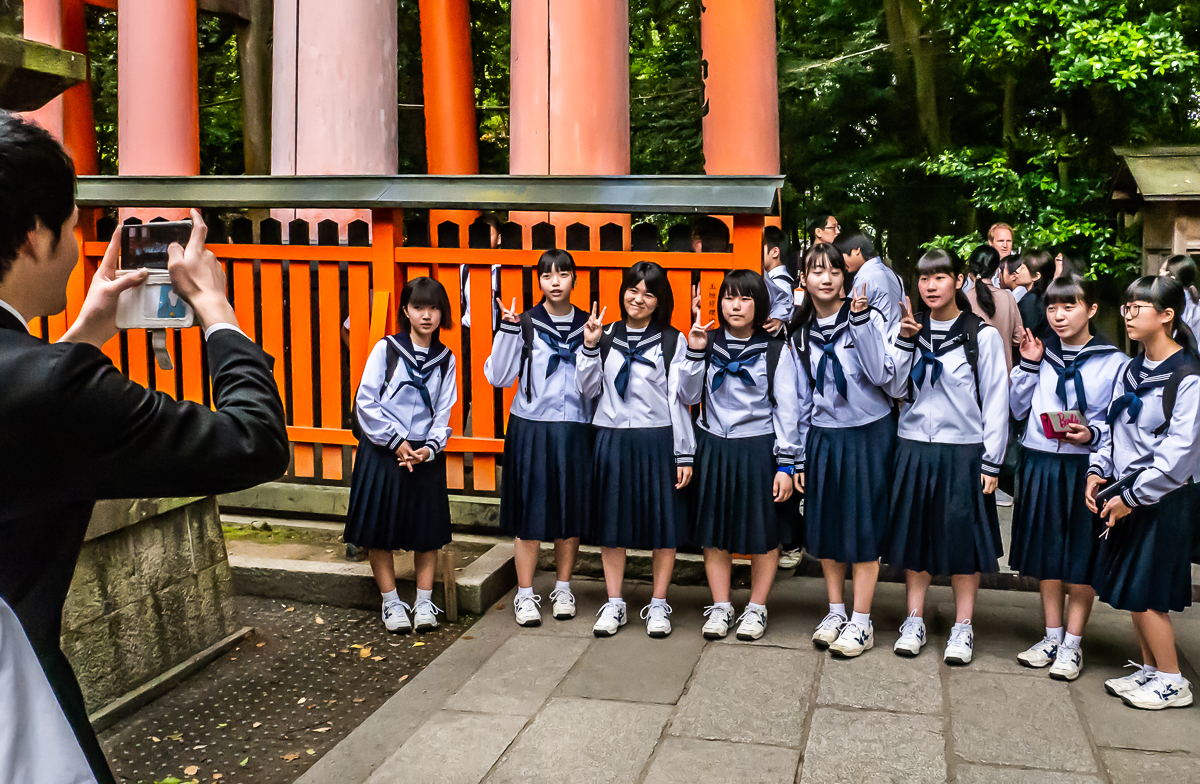 These young ones were tasked with questioning tourists to practice their English.

Leaving the shrine I walk down the pedestrian street I probably should have walked up to get to the shrine in the first place. It is a kaleidoscope of sights, sounds, aromas, and colours, and is packed with both people and street food stalls. Finally I eat – five delicious gyoza, and fresh squeezed orange juice. The oranges are put into a machine that bores a small hole in the top and then whizzes around inside the orange rendering it into juice. Unfortunately it only produces about three mouthfuls of juice. I tear the orange open and eat the rest of it. Desert is mango ice cream with a swirl of tofu soft ice cream on top. A fine way to break my fast although it is long past breakfast time.

Although I understand that if I want to get photographs with no, or few, people in them I have to arrive very early at major sites, I don’t mind the crowds. Everyone is there for the same reason. It’s because it’s a place that’s worth seeing. And this definitely proved to be true with Fushimi Inari and the Golden Pavilion.Next post: The streets of Old Kyoto – Gion and HigashiamaAll words and images by Alison Louise Armstrong unless otherwise noted
© Alison Louise Armstrong and Adventures in Wonderland – a pilgrimage of the heart, 2010-2018.

75 thoughts on “The Red and the Gold – Kyoto’s Fushimi Inari Shrine and the Golden Pavilion.”