As I looked through my files for my favourite wildlife photos it became obvious that there would be far too many for one post. Here then is the rest of the collection: 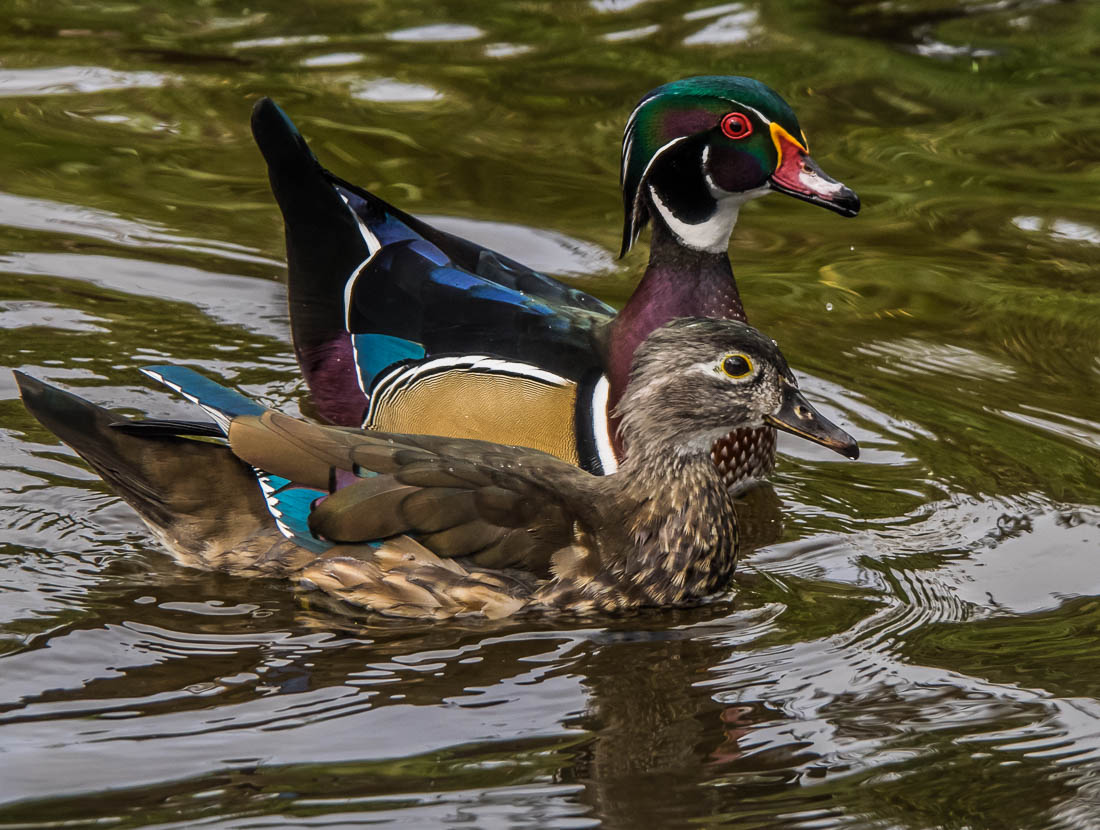 One summer we housesat for friends in their big beautiful house in Burnaby, BC. Quite frequently we would go to Burnaby Lake Park to walk the trails, and especially to watch all the water birds on the lake: sandhill cranes, Canada geese, mallards, and many others. This is a male and female wood duck. The male wood duck has always been a favourite of mine for his glorious plumage! 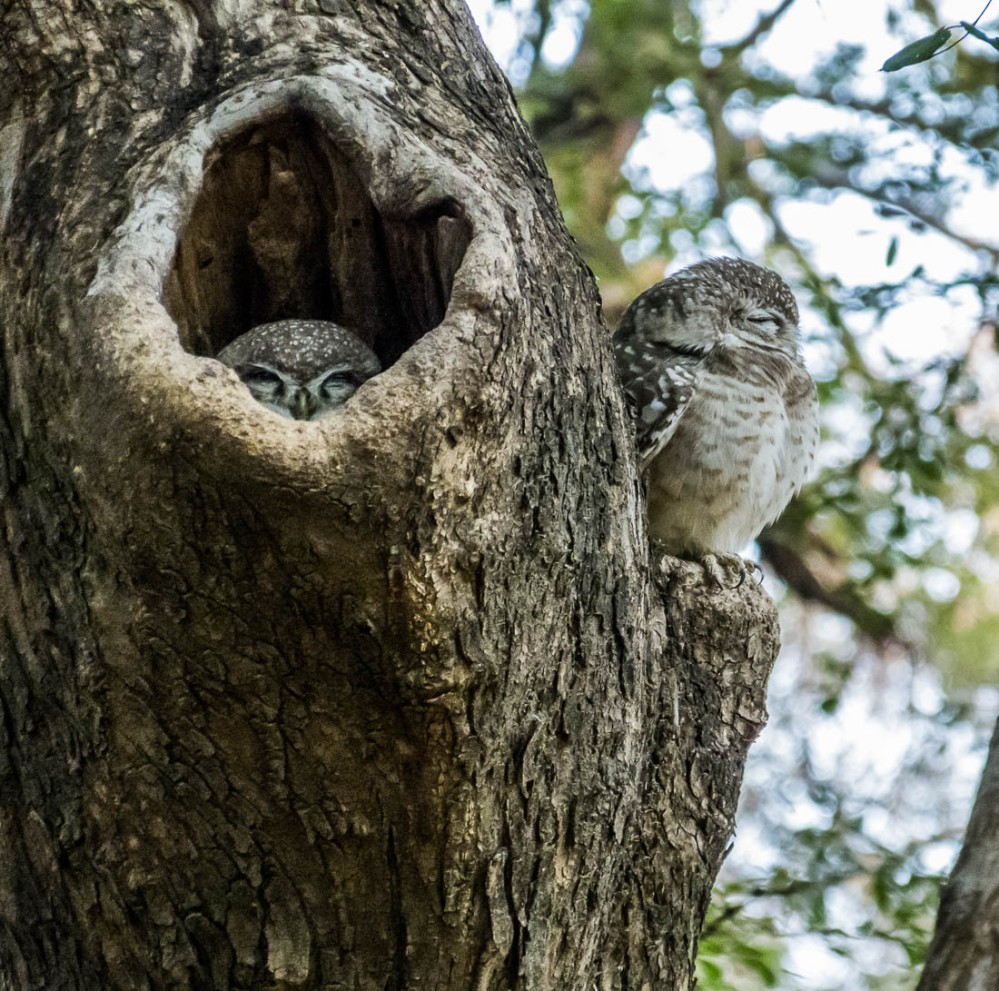 Ranthambore National Park, near Jaipur, India. Rumbling along in an open sided jeep over rough tracks, we stopped often, to take in the landscape and the abundance of wildlife. We went out for two excursions, one early morning and another in the afternoon and each time were rewarded with the sights and sounds of native birds and animals in their natural habitat, including these two tiny but fully grown pygmy owls high in a tree. 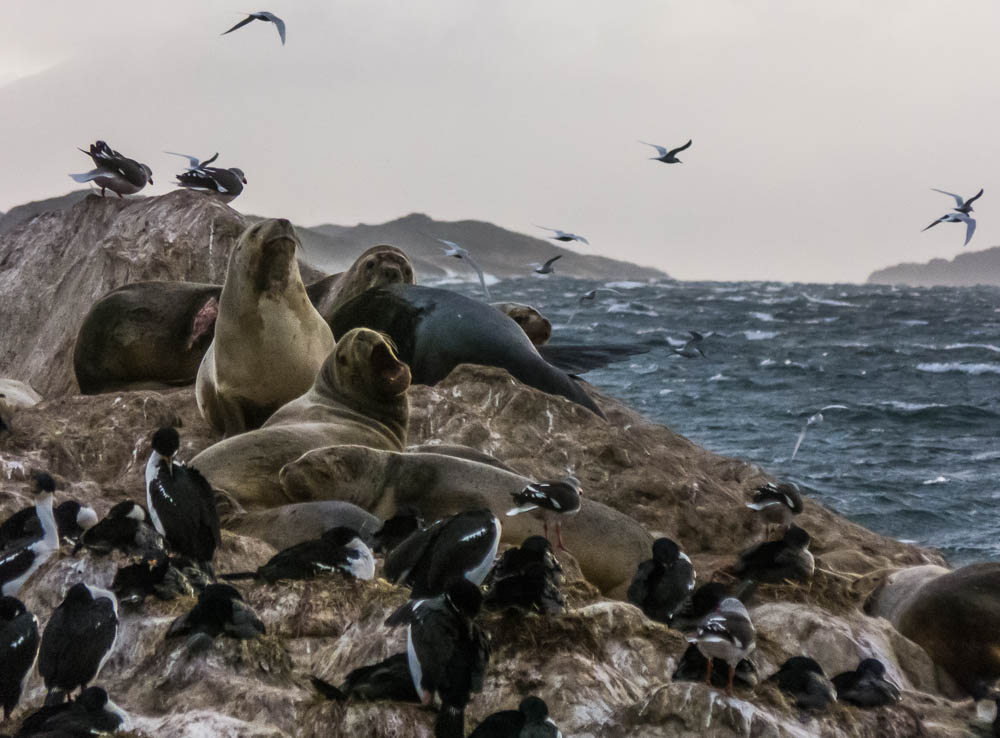 We left from Ushuaia, Argentina, the southernmost city in the world, for a cruise along the Beagle Channel, that narrow strip of water between the island of Tierra Del Fuego, and the islands to the south of it. On a wild and windy day we went slowly along the channel past infrequent lonely farms, the occasional wreck, a lighthouse, penguins, and small rock islands thick with sea birds and sea lions. It’s a harsh empty lonely and cold place where marine wildlife is abundant and undisturbed.

On a three-day overland trip across the uninhabited high desert of Bolivia we stopped at a lagoon to watch the flamingoes. There were dozens of them, close and far away, all feeding on the algae in the lagoon. We sat there, entranced, for a very long time. 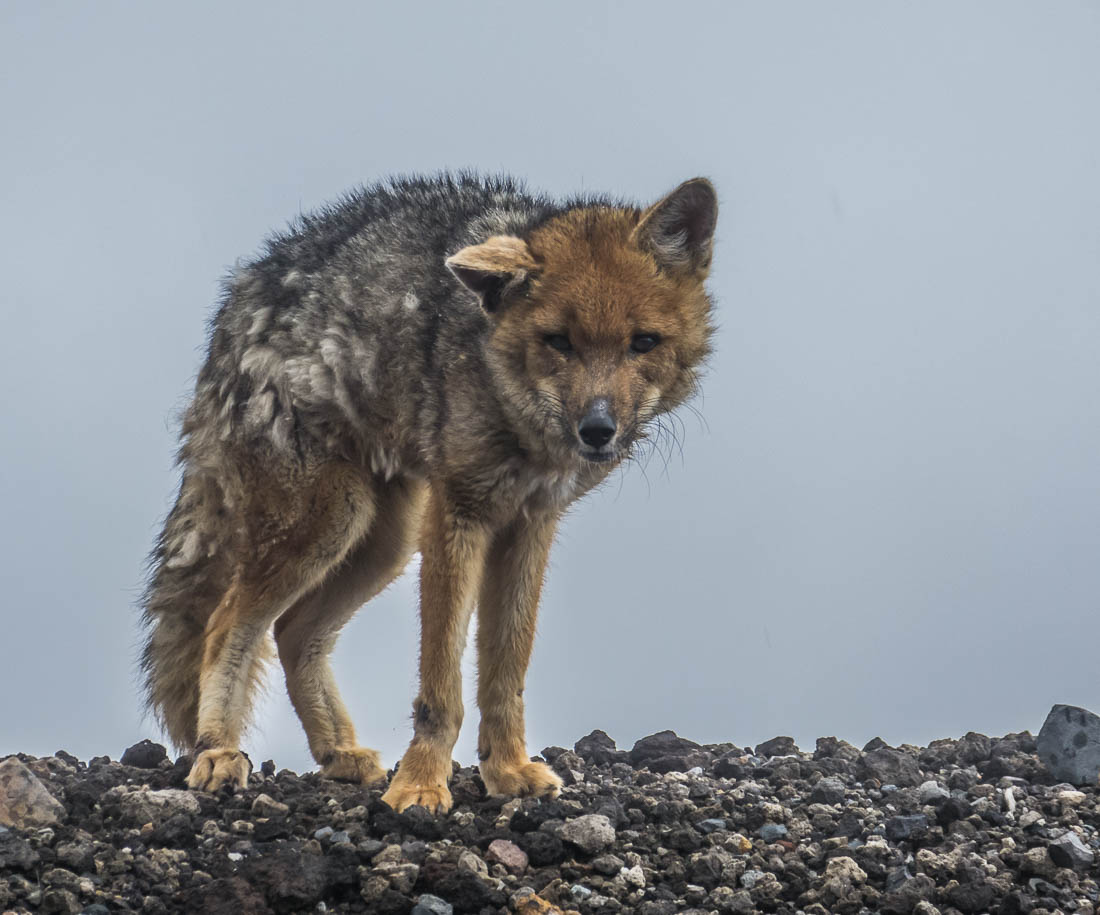 This encounter felt miraculous. We went with a guide to climb Cotopaxi Volcano in Ecuador. It was a cold blustery day. It wasn’t raining but we were surrounded by fog for the whole climb. There were no views to be had. Anyway we made it as far as the refuge at 4864 metres and decided that was enough. It was perfect timing. We headed back down to the parking area and then drove slowly down the mountain. We were alone on the road in this deserted moonscape. Then we saw it: an Andean wolf at the side of the road. Our guide stopped the car and I slowly rolled down my window. It was as if the wolf had come to say hello. It stood there for several minutes looking at us and then ambled away. 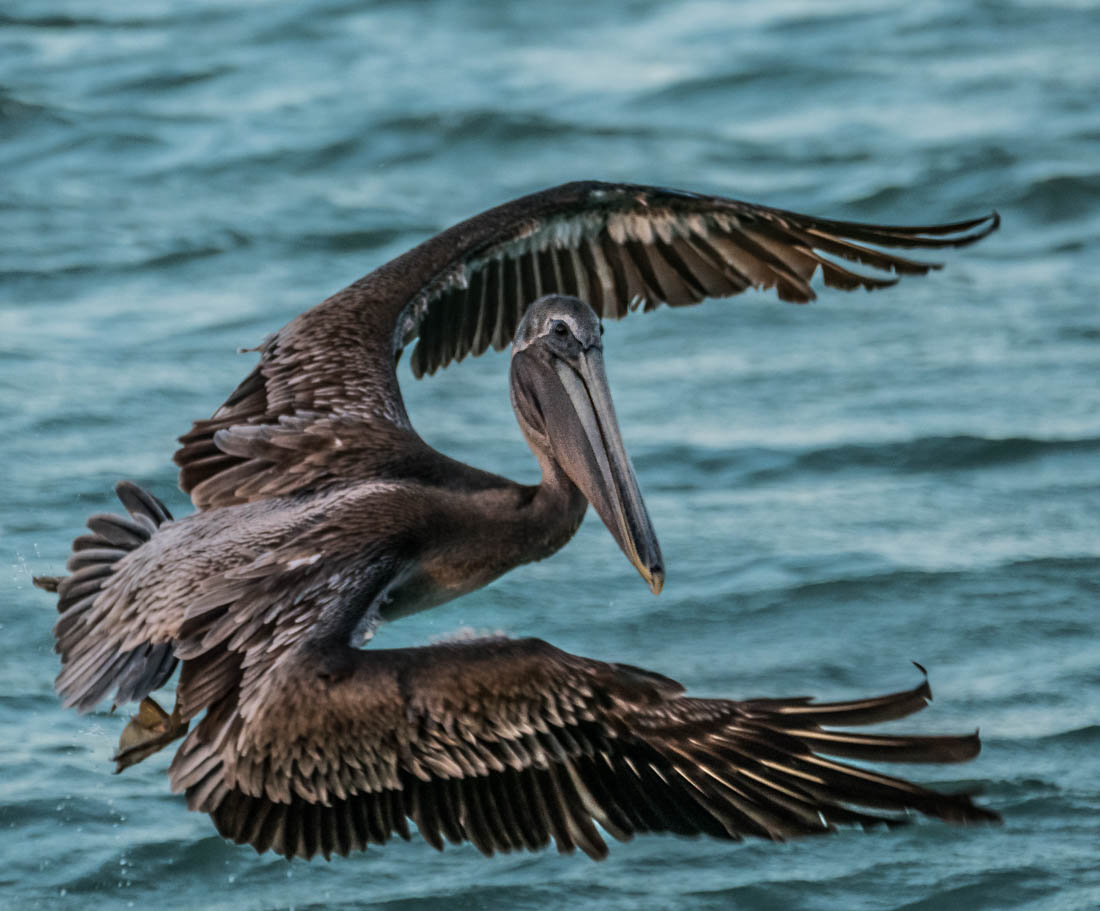 We went to Rio Lagartos on the north coast of Mexico’s Yucatan Peninsula to see the flamingoes. On our first evening we wandered down to the water where the fishing boats were moored. There was mayhem as dozens of pelicans dove for fish. Pelicans are large and ungainly. They can be quite majestic in flight, but when diving for fish, filling their gullets, fighting the waves, they can be graceless and comical. The spectacle was added to by brazen seagulls constantly landing on the pelicans hoping for a free meal.

Very early the next morning we left for an all day cruise on the waters of the Lagartos Estuary. The Lagartos Reserve is known for its abundance of bird life; in the summer it is the nesting place of over 40,000 flamingoes. We were there in the winter but we still saw plenty of flamingoes.

Walking alone in old growth forest on Whidbey Island, Washington, USA I suddenly saw an owl. I froze. I watched it fly and land on the branch of a tree. Then suddenly there was another landing on another tree nearby. Then one of them took off and landed on a tree even closer to me. After a minute or so the second one joined the first, and there they sat, posing for me. 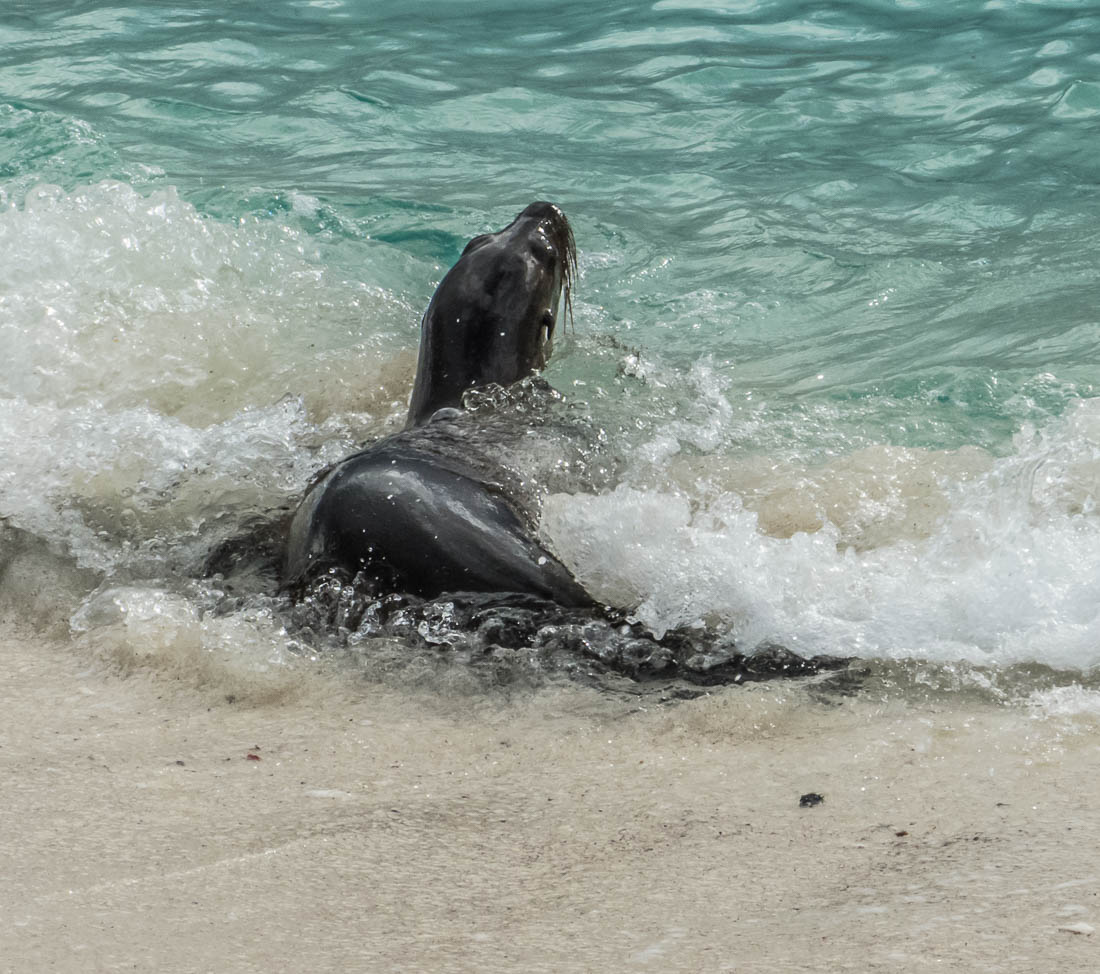 We spent eight says cruising the Galapagos Islands, Ecuador, and it remains one of the highlights of all our travels. We visited seven different islands and every beach was littered with sea lions. We watched them walking their lurching walk, rolling in the sand, barking, swimming, rolling in the waves, pups suckling or mewing for mum.  On some beaches they were stacked up side by side, rolling around and on top of each other, playing together, soaking up the sun and the water, completely at one with their environment and oblivious to us.

This one is a baby, about the same size as a one-year-old human baby.

And of course we had an opportunity to see the famous tortoises. They are slow and lumbering, and very big.The head of the Galapagos Giant Tortoise was used as the model for the head of the heart-melting alien in the movie ET. 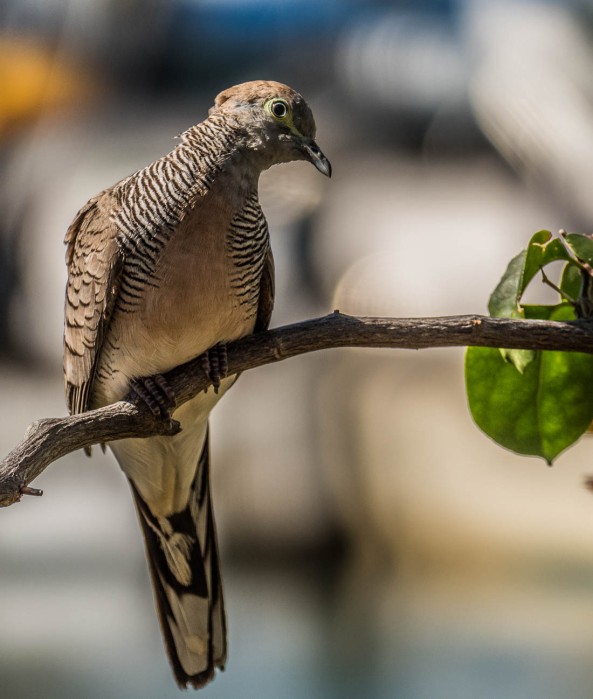 One day walking from our hotel in Honolulu to Waikiki Beach we came upon this zebra dove perched in a tree.

Canberra, Australia’s capital, has many large public parks and gardens. One  day Don and I and my sister Julie went to Weston Park. We knew we’d see pelicans and other bird life down by the lake but the big mob of kangaroos was a surprise. It’s pretty common to see roos in the parks and nature reserves of Canberra, but to see them in such large numbers is rare. There must have been about 30 or 40 of them of all ages. Julie, who lives in Canberra, said she’d never before seen so many together.

As we watched the mob we moved slowly closer. Suddenly they were on high alert, sitting up straight and watching us. 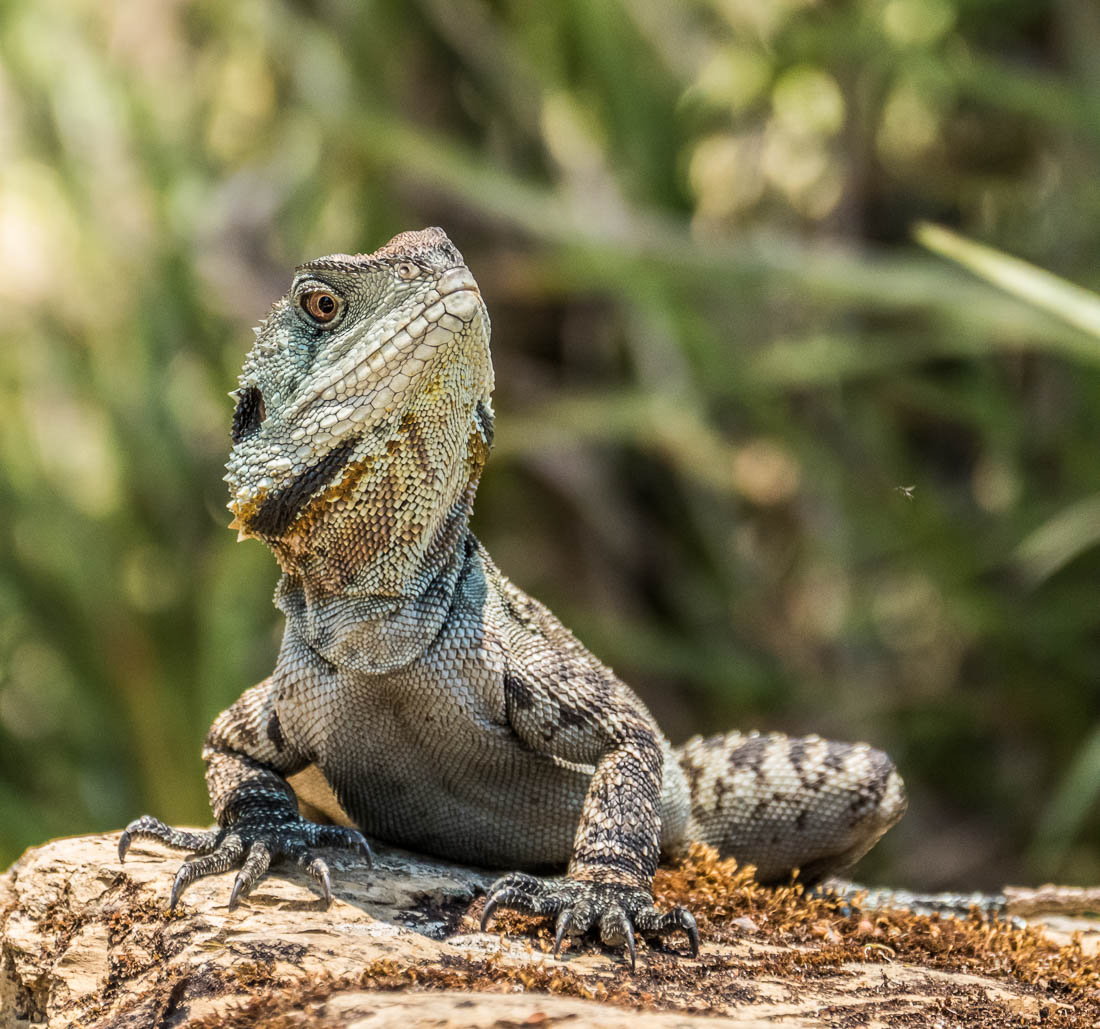 There are water dragons in the rivers around Canberra, and in the extensive water features in the National Botanic Garden. The biggest are about four feet long.

Another photo from Canberra where colourful parrots rule the skies. This one is a crimson rosella.

We did a road trip from Canberra down to the Great Ocean Road which winds its way along Australia’s south coast. On the road out to the Otway Lighthouse we saw koalas in the trees. I’d seen koalas previously, in sanctuaries. I never thought I’d get to see any in the wild, though I do know of people who live in rural areas who see them frequently. For Don and me it was an extraordinary and exotic experience. Real koalas! In the wild! This one is sound asleep perfectly balanced on a narrow branch.

Fogg Dam Conservation Reserve is about half way between Darwin and the western boundary of Kakadu National Park in the far north of Australia. We were alone, driving along the narrow, single-lane road surrounded on either side by water crowded with lily pads, lotus, and grasses. Suddenly I saw it: an adult female jabiru in the water right next to the road! We could hardly believe our luck. We stopped the car and managed to get out without disturbing it. It felt like we had hours to watch it although it was probably only minutes before it took off.

South of Kakadu National Park and Nitmiluk National park, and a bit over 400 km south of Darwin, in Australia’s Top End, is the tiny town of Mataranka. Very close by is Bitter Springs, a magical place. Bitter Springs is a spring-fed warm-water river surrounded by a lush forest of palm and eucalyptus, with pandanus growing along the banks and lilies in the water. It was here, after floating serenely down the river, that I found this dragonfly resting on a lily bud.

When we arrived in Wanaka on our New Zealand road trip we thought we’d arrived back in Canada. Lake Wanaka, with its trees and beaches, and surrounding mountains and vineyards, is so like the Okanagan Valley in British Columbia we could as easily have been in Vernon or Kelowna where we frequently used to spend our summer holidays. Down by the lake in the evening we spent a sweet time watching the newest generation of mallards. 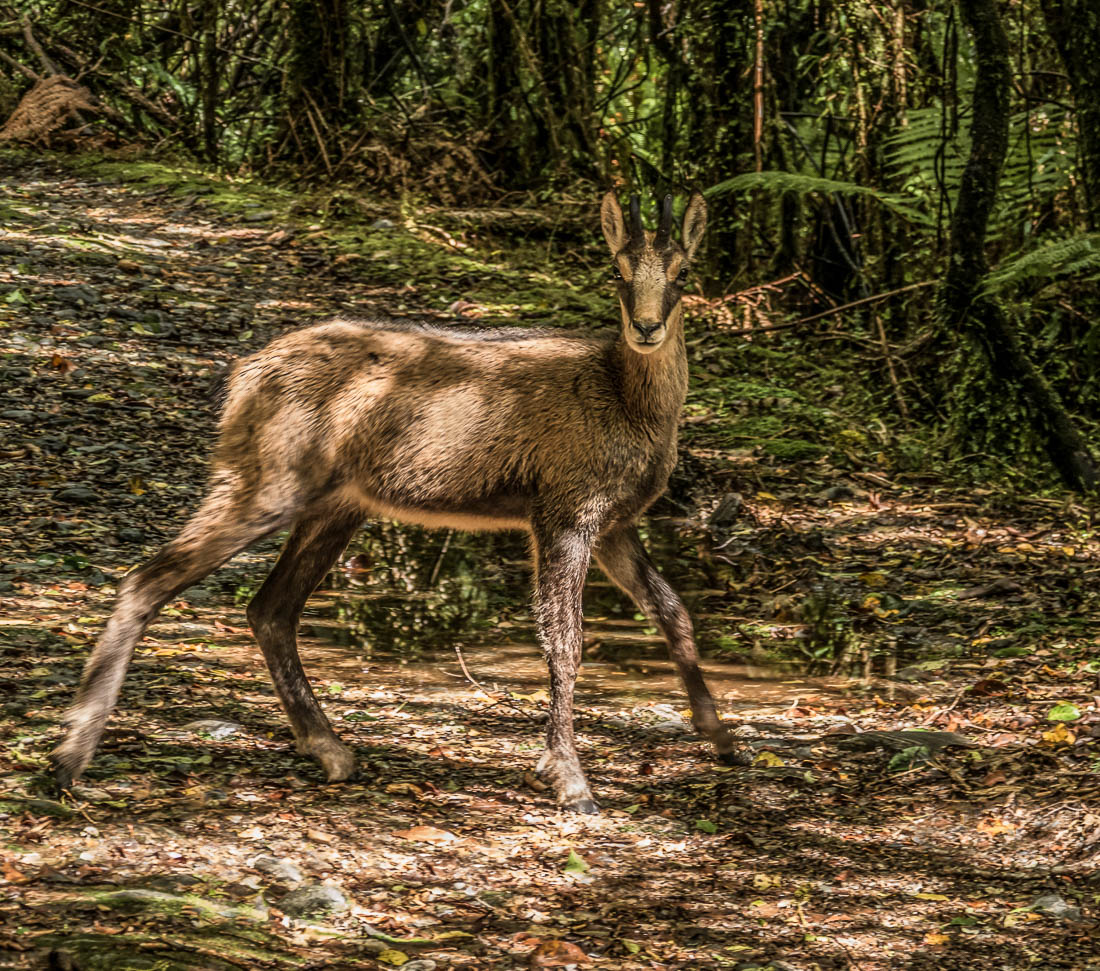 We hiked through the rich fecund New Zealand rainforest, where the trees are thick with dripping moss, from Franz Josef to Callery Gorge. On the way, one of the most beautiful, serendipitous moments of our time in New Zealand: a young wild chamois buck came out of the forest, stood for a moment in the middle of the path staring at us, then disappeared again into the forest. It felt like magic. 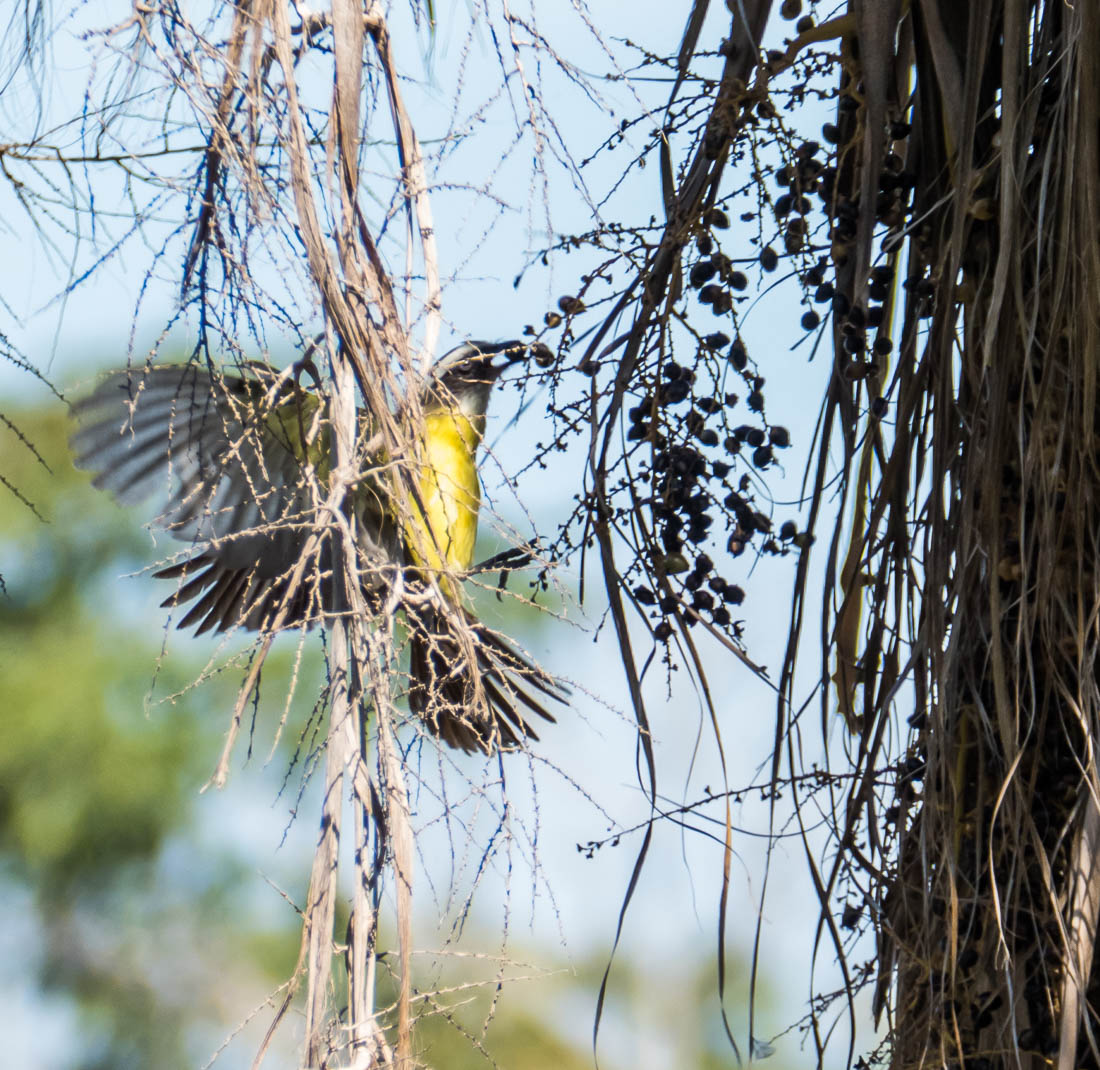 For four months in 2013 and again for two months in 2016 we rented a beautiful apartment in the dusty fishing village of La Manzanilla, Mexico. The front doors of the apartment opened onto a patio and pool with a view out to the sea. The pool was surrounded by trees including this palm. Many varieties of birds were constant visitors, like this flycatcher snagging palm berries. 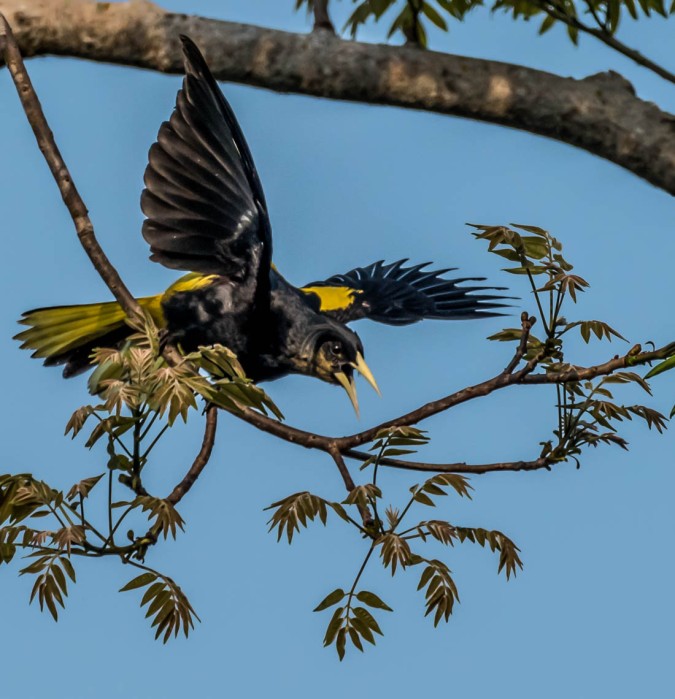 And walking to the gym in La Manzanilla on a sleepy Sunday morning: an oriole in a hibiscus tree.

71 thoughts on “All Creatures Great and Small: wildlife around the world. Part 2”