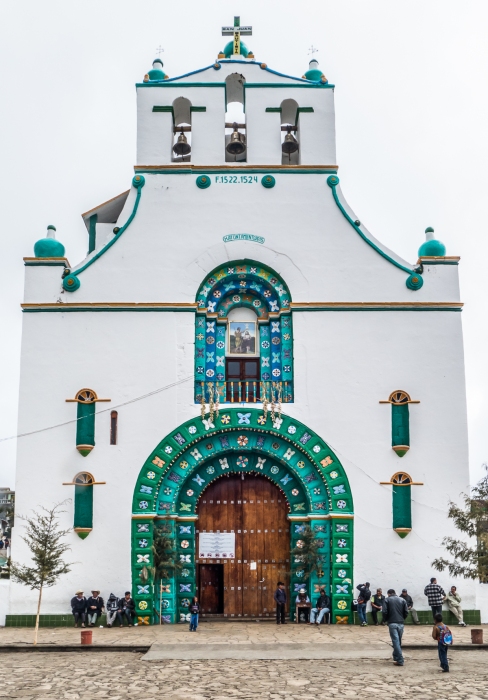 January 29, 2017. We’re sitting on a carpet of pine needles on the floor leaning against the wall. There are people all around us, some sitting, and many more standing. It’s crowded. We don’t feel squished but it’s impossible to see what’s going on. We’re the only non-locals in this church during what appears to be the Sunday morning service. The men are dressed in traditional fuzzy black wool tunics, 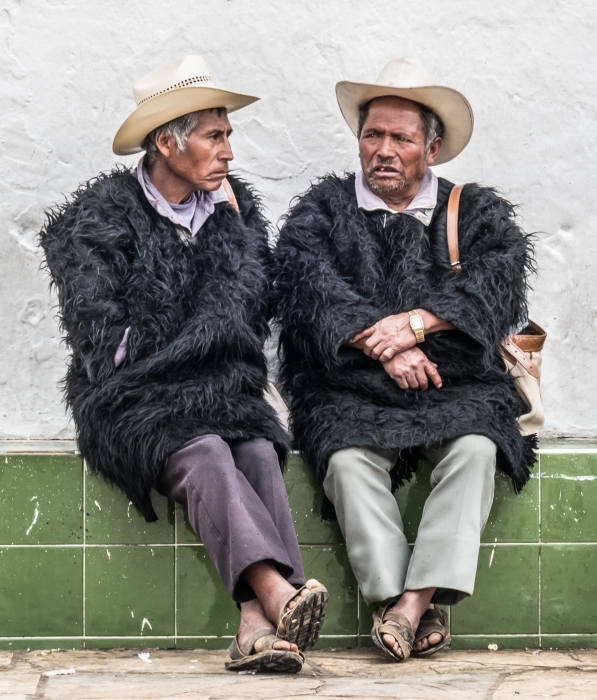 except for the elders. They wear the same tunics but in white. The women are dressed in fuzzy black skirts, colourful blouses, and shawls. The air is filled with the scent of pine and the smoke from burning copal resin. The sound of people singing fills the space with music. We sit quiet and still and soak up the energy of this holy space. I am in tears. As the service comes to a close and people begin moving out a woman notices my tears and as she passes she says something to me in Spanish. The only word I catch is corazón. Heart. That word I know, and yes she is right, my heart is so open I am in tears.

We are in the church in the village of San Juan Chamula in Chiapas. There are about 77,000 Chamulans and San Juan Chamula is the “head” village. They are of the Mayan Tzotzil ethnic group and they speak the Tzotzil language. They have a unique autonomous status in Mexico with their own police. No other police or military are allowed in the area. Although we have been to several indigenous communities in Mexico, in Chamula it almost feels as if we’ve stepped into another country. Chamula has it’s own laws and traditions. In the church wearing a hat is offensive and sacrilegious, but walking in with a beer is entirely acceptable.

The church, nominally Roman Catholic (though it may have been deconsecrated) is unlike any other church we’ve seen. There is no seating and no altar. The floor is covered in pine needles. There are great swaths of cloth draped across the ceiling. There are dressed wooden statues of Catholic saints in cases all along the sides. The saints actually represent Mayan gods and they have mirrors on them to deflect evil, and in true Mayan tradition, to help the soul of the person praying find its way home. There are tables dotted down the centre covered in flowers and colourful candles. The only light is from some high grimy windows, and the candles, thousands of them.

Many people leave after the service and we can see more clearly. In front of the tables down the centre, and in front of some of the saints at the sides people are engaged in rituals of prayer and healing that combine sixteenth century evangelism and pre-Columbian beliefs. It is a unique religious syncretism. Shamans, known as curanderos, diagnose medical or physical ailments and perform rituals that may involve candles of specific colours and sizes, flower petals, feathers, candles in glasses and/or eggs drawn across the body, and in extreme cases the sacrificial killing of a chicken. The chickens are given alcohol to calm them, and when it is the right time they are killed instantly with a quick snap of the neck.

We watch a family kneeling on the floor with the specified remedies – candles and eggs and a complacent live chicken. A curandero sits with them. They stick dozens of coloured candles to the floor with melted wax. They drink pox (pronounced posh) a local sugar-cane-based liquor that is 38% alcohol. They drink coca cola because they believe burping expels evil spirits. Sometimes they take a mouthful of pox or coke and spray it out over the candles. They chant prayers in Tzotzil. And the curandero performs his rituals, chanting prayers and incantations. We hear the soft chanting from several similar small groups.

After a while we move to a spot near the front of the church and sit in quiet meditation. A curandero or elder emerges from a side room with a censor filled with burning copal. He swings it from side to side as he walks through the space filling the air with smoke and perfume. Don is a short distance away and I notice a man talking to him. Don sends him to me. He claims to be a shaman. I tell him about the pains in my legs and he offers to do a healing for me, and for Don too, for 100 pesos each. We have no idea who he is, or if he is genuinely a shaman but nevertheless we agree.

From Don’s journal: He led us out of the church and up a few streets to a corner store where he asked for another 100 pesos to buy a dozen tapers, two candles in glass containers, two eggs, and bottles of coca cola and water. Then off we went again into an alleyway beside a house then down an even narrower alleyway to the door of a room.

The room inside was dim and dingy. It was quite bare apart from a small alter against the wall on the opposite side to the door, and a wide bench in the middle of the room made from a plank supported by two small chairs.

His treatment consisted of imbibing a mouthful of pox and then spraying it all over Alison. Following this he used a small pine bough to pat all around Alison’s legs and hips. Then he hugged Alison close to him for a while. After that I underwent a very similar treatment. Then both Alison and I sat on the bench facing the altar, and the shaman sat between us and held our hands. He chanted and said prayers, presumably in Tzotzil, wiped his hands across our palms then held our hands again.

Following that he lit ten of the coloured tapers and placed them upright on the floor in front of the altar. He then touched different areas of each of our bodies with a candle in a glass container, which he then handed to us and lit. He waved eggs around each of us, which is apparently a purification ritual. After that he hugged each of us again, strong full body hugs, and then poured Alison a small glass of pox from a plastic bottle. Alison, not understanding, immediately sprayed half of it on the floor. I told her that she was supposed to swallow it, not spray it, so he gave her another small glass, which she drank. Then it was my turn: I got two small glasses of what was pretty nice neat alcohol, which I slammed back with pleasure.

The shaman announced that the ceremony was over. But then he asked for another 100 pesos. Knowing that I only had 200-peso notes I asked him in Spanish if he had change. He said yes, but when I gave him the 200-peso note he announced that it was 100 pesos each, and pocketed the 200 pesos! I did a mental shrug, because after all the total cost, including the candles and other materials, came to 500 pesos (US$25). We got a good show, and possibly some good healing from it, and Chiapas is one of the poorest areas of Mexico.

From the moment we leave the church and follow him down the street I don’t know what to make of it. Why are we not doing the healing in the church? During the ceremony my scam radar hits the 100 mark, but I keep reminding myself to be open-minded and present to the experience. And it is an interesting experience. Even if he is a complete sham, which I suspect he is, we still get a glimpse into some quasi version of the Mayan rituals and to hear the Tzotzil language. It is not a waste of time or money, it is a glimpse, however orchestrated, into a unique spiritual practice.

All societies throughout history have created ways to commune with their gods, to connect with spirit, with something beyond ordinary reality. We do this hoping to get help with our earthly problems, to be comforted, to be saved from suffering. This being human is not for the faint of heart. Every society from the beginning of time has created it’s own beliefs and unique gods, and specific ways of communing with them. Here in Chamula they cling to their traditions with a fierceness after centuries of having been told to worship a different god by people who couldn’t or wouldn’t see that it’s all the same god. The rituals I witness in Chamula in essence are no different than rituals practiced throughout the world in countless different ways. They are doing what all people do in a holy place, and there is no denying I am as moved by the energy in this Mayan “Temple” as I have been in Hindu temples in India and Bali, and in Buddhist temples in Asia.

Photography is strictly forbidden in the church and is taken very seriously. People can be expelled from the town if caught photographing in the church. Nevertheless there are quite a few photographs online. Scroll down a bit to find one on this site.

We walk back to the church

and see that all the congregants are gathered for lunch, music, and camaraderie, and much drinking of pox, along the sides of the big square in front of the church. I have read that by lunchtime pretty much everyone is drunk senseless, but then senselessness is believed to aid communication with the saints and the other world. 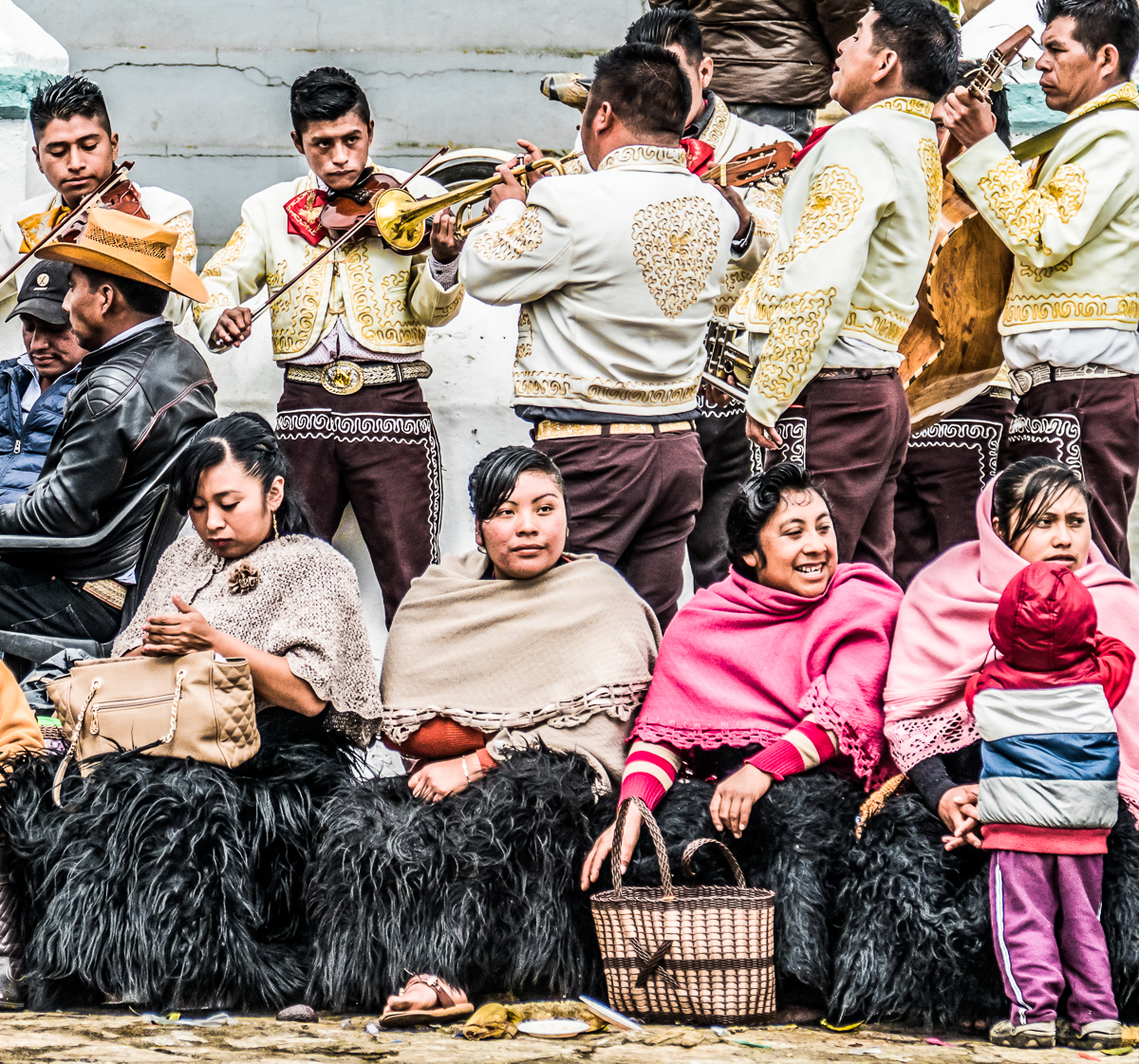 At this point we wander over to the Sunday market beyond the square in front of the church.

I am careful photographing. Chamulans believe that photographs steal their soul, so they often turn away, and hide the faces of their children. I do, however, manage to capture a few shots without disturbing anyone. 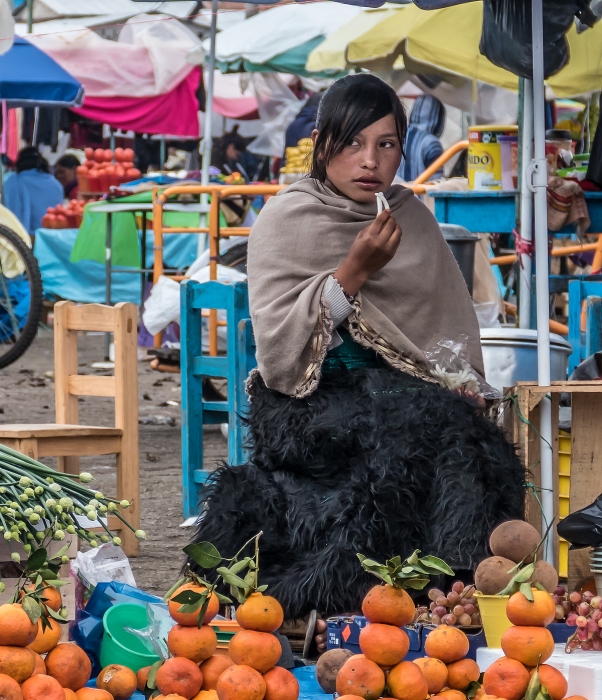 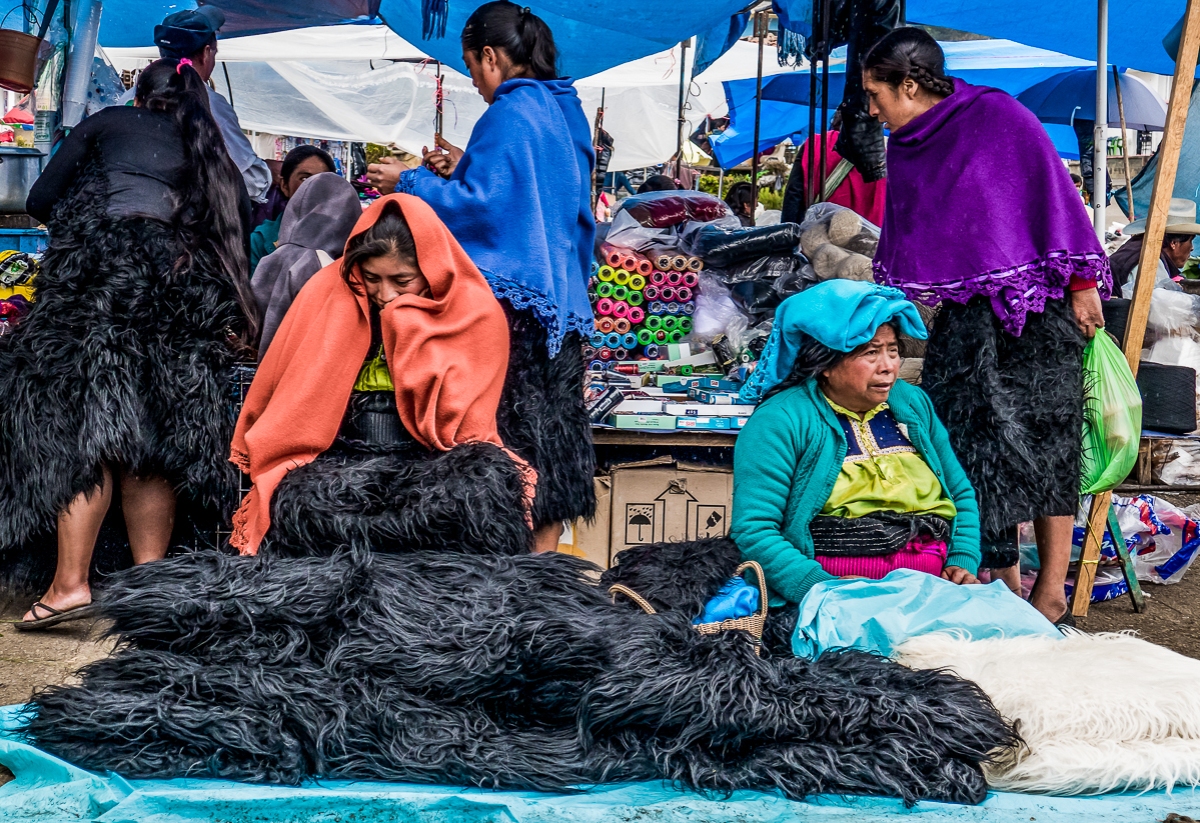 By this time we’re getting hungry. On our way back to the church we come upon a food cart selling the best freshly made fries anywhere ever! A little salt, a little ketchup, a little mayonnaise, and hot, perfect, crispy-on-the-outside, creamy-on-the-inside potato chips. We just about inhale them.

We return to the church to sit and meditate some more, and to absorb the quiet peaceful energy before heading back to San Cristobal de las Casas, just ten kilometres away. It’s been a very full day.This is the final post of our travels around the Yucatan Peninsula and Southeast Mexico.

Playing Around Near Playa

Playa del Carmen: the quiet end of the beach, and Cenote del Eden

Not Much Merriment in Merida

The Birds of the Yucatan Wetlands

Created by Hand, Created by Nature: Mexican Folk Art and the Yucatan’s Cenotes

Ancient Cities of the Maya

Campeche: you had me at hello. Villahermosa: not so much

The Dazzling Rhythms of Tradition. The Fiesta Grande in Chiapa de Corzo

78 thoughts on “Of Shamans and Shams: the Tzotzil of San Juan Chamula.”