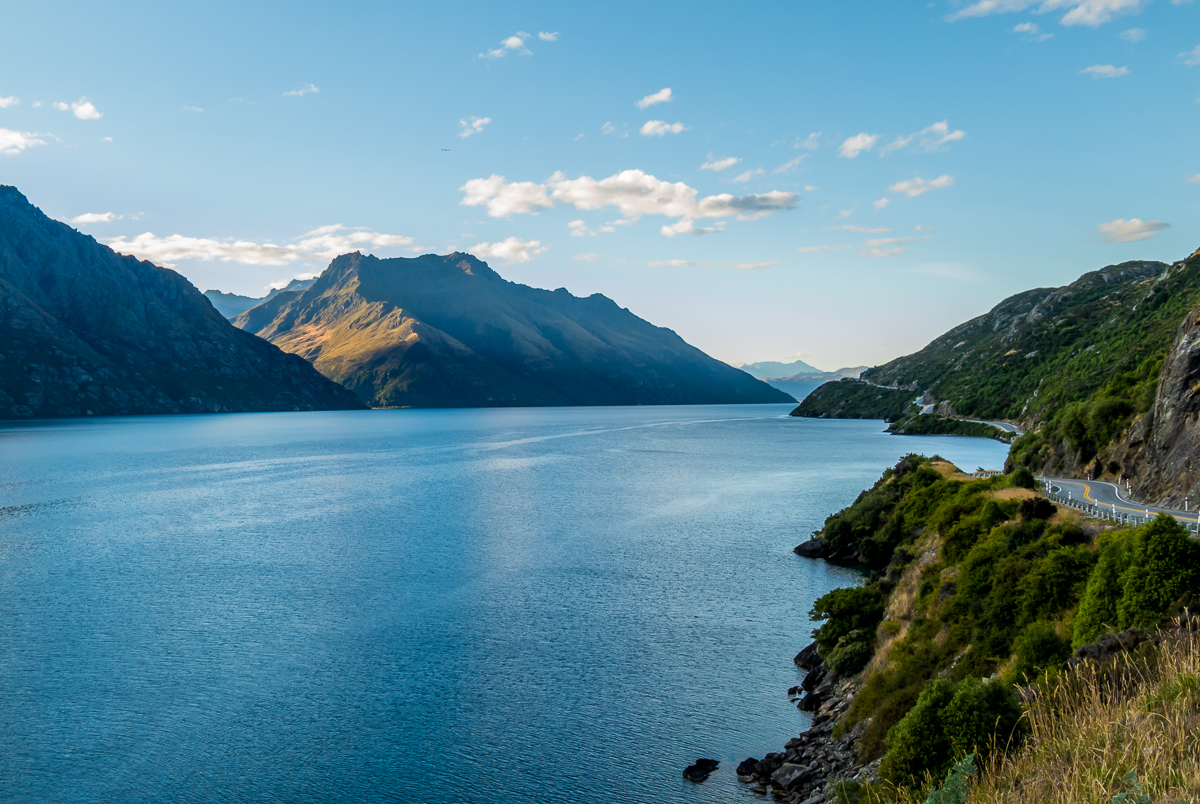 26 Feb-1 Mar 2015. We are standing in near total darkness on a metal platform inside a cave inside a mountain. A huge volume of water is thundering and roaring below us. There is just enough lighting to see the water. We are waiting to board a small flat-bottomed boat at the edge of a hidden grotto formed by a plateau that temporarily slows the onward relentless rushing of the water.

The water begins its journey from Lake Orbel high above in the Murchison Mountains in New Zealand’s Fiordland National Park. At the end of the lake the water goes underground as a river, eroding the limestone as it rushes down. Over many thousands of years the water has created a cave seven kilometers long. It is a perpetually expanding twisting network of passages filled with whirlpools and waterfalls. Having walked for a while along metal walkways we are only a short way into the cave although we are long past the point where any daylight penetrates.

One by one we climb carefully into the boat. And then all the lights go out. Pitch black is not an exaggeration. Impenetrable darkness. Slowly and silently the boat moves forward and looking up we see the lights. We are in a wonderland where, in the blackness, we see stars as in the darkest night sky; only they are close, so close I feel I can almost touch them. There are hundreds of them. Hundreds. Everywhere we look. The boat glides back and forth. I sit in amazed silence. Everyone is silent. Darkness. Silence. Magic fairy lights.

All too soon it is over and we return to the docking platform and make our way out of the cave. The secret of the silent boat moving against the current is overhead pulleys. The secret of the lights? They are glowworms, and I learned a thing or two about them. Insects are washed down from above as lava. They get caught on the walls of the cave and eventually hatch. They are attracted to the only light available: the light from the glowworms, and the hungrier the worms the brighter they glow. The glowworms create toxic dangling silk threads about two or three inches long. The insects get stuck in the threads and become dinner for the worms. Apart from eating insects they are also territorial cannibals. If a young worm makes its home too near another it will be eaten in a flash.
Earlier on this glorious sunny day and we had taken a walk around the shores of Lake Te Anau, 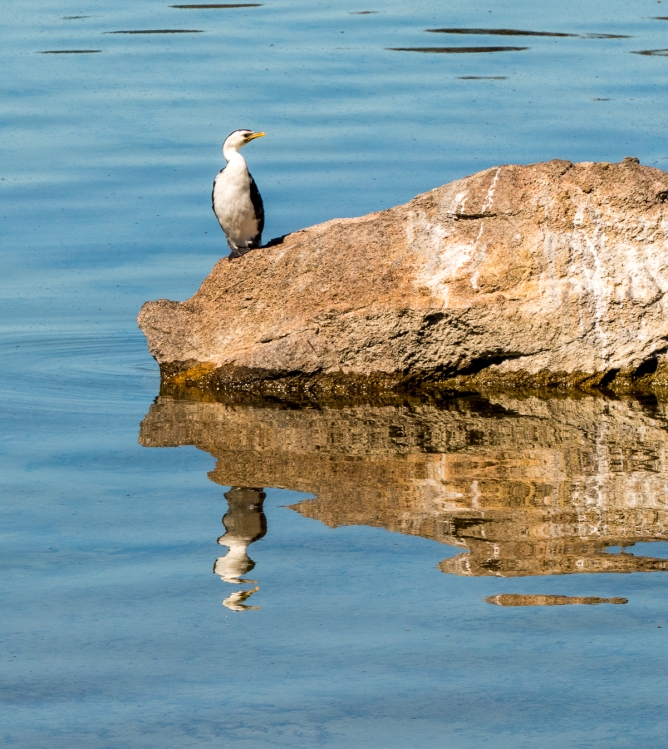 and followed it with a cruise on the lake that included the visit to the glowworm caves. 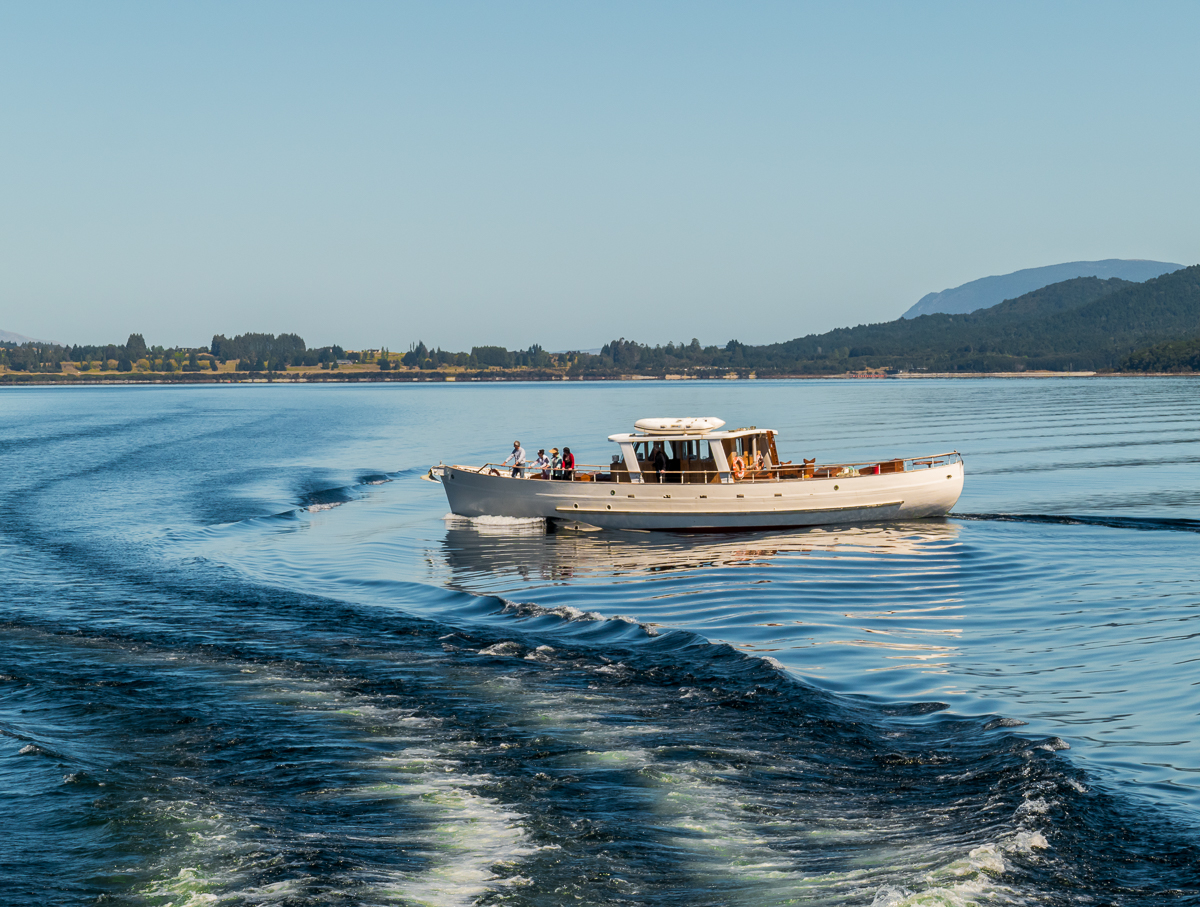 Lake Te Anau is a short drive from Queenstown where we were staying, and which is located in an equally spectacular setting. In Queenstown we were overwhelmed by youth on a quest for extreme adventure. The hostel in Queenstown was where a couple of older people remarked, as they saw us, “Oh look, some other people over twenty!” Every kind of thrill imaginable is available in Queenstown: bungy jumping, sky diving, canyon swinging, white water rafting, jet boating, river surfing, zip-lining, cross-country quad-biking, paragliding, hang gliding, and canyoning. We called it Adrenaline Central, and stuck to walks and cruises, though I swear I will go sky-diving one day. Tandem of course. Don did it solo many years ago and swears he will never do it again.

From Queenstown we drove southeast to Dunedin. It was a pleasant drive through green rolling hills with none of the compelling insistent beauty of the mountainous country around Queenstown and Fiordland National Park. Lots of sheep though.

We’d found accommodation in Dunedin for four days at Hogwartz Hostel and knew we’d need the time there to do some forward planning. At Hogwartz the cost of Internet data was an eye-watering $50 per gigabyte so we spent one of those four days in the local library, where we could get free Wi-Fi, planned an itinerary for the South Island, and booked accommodation for the coming couple of weeks.

Dunedin seemed like a charming city, what little we saw of it. There are many lovely buildings, 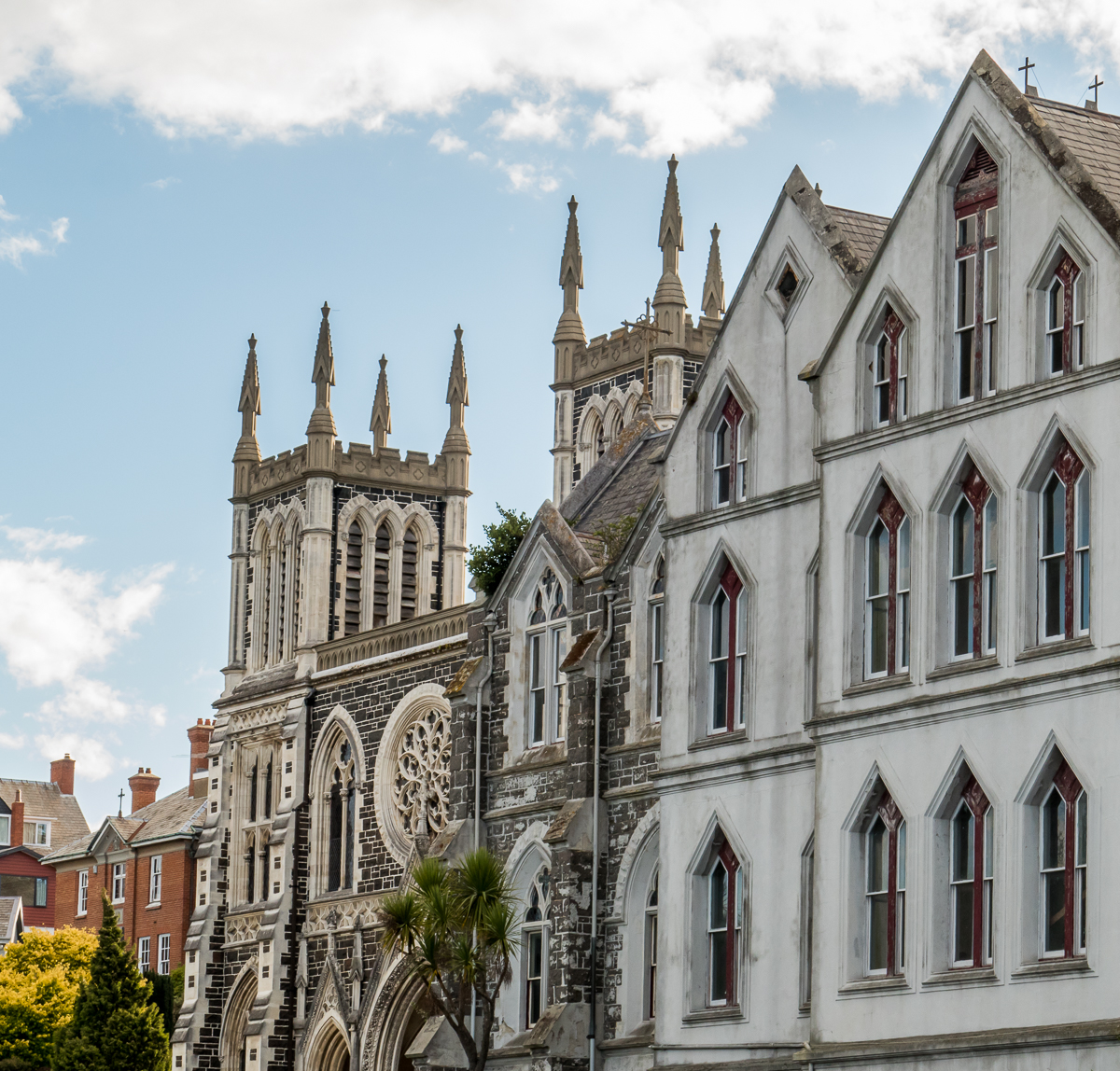 and an imposing railway station, that embodies Dunedin’s wealthy heritage and is New Zealand’s most photographed building. I was compelled to add to that statistic, though not of the outside which didn’t appeal to me, but of the beautiful interior. If you’re curious about the exterior you’ll find a picture easily enough on the web, and you can also see it at the bottom of the street in the photo above. The use of contrasting dark and light limestone and the intricate decoration led to the architect, George Troup, being given the nickname “Gingerbread George”. 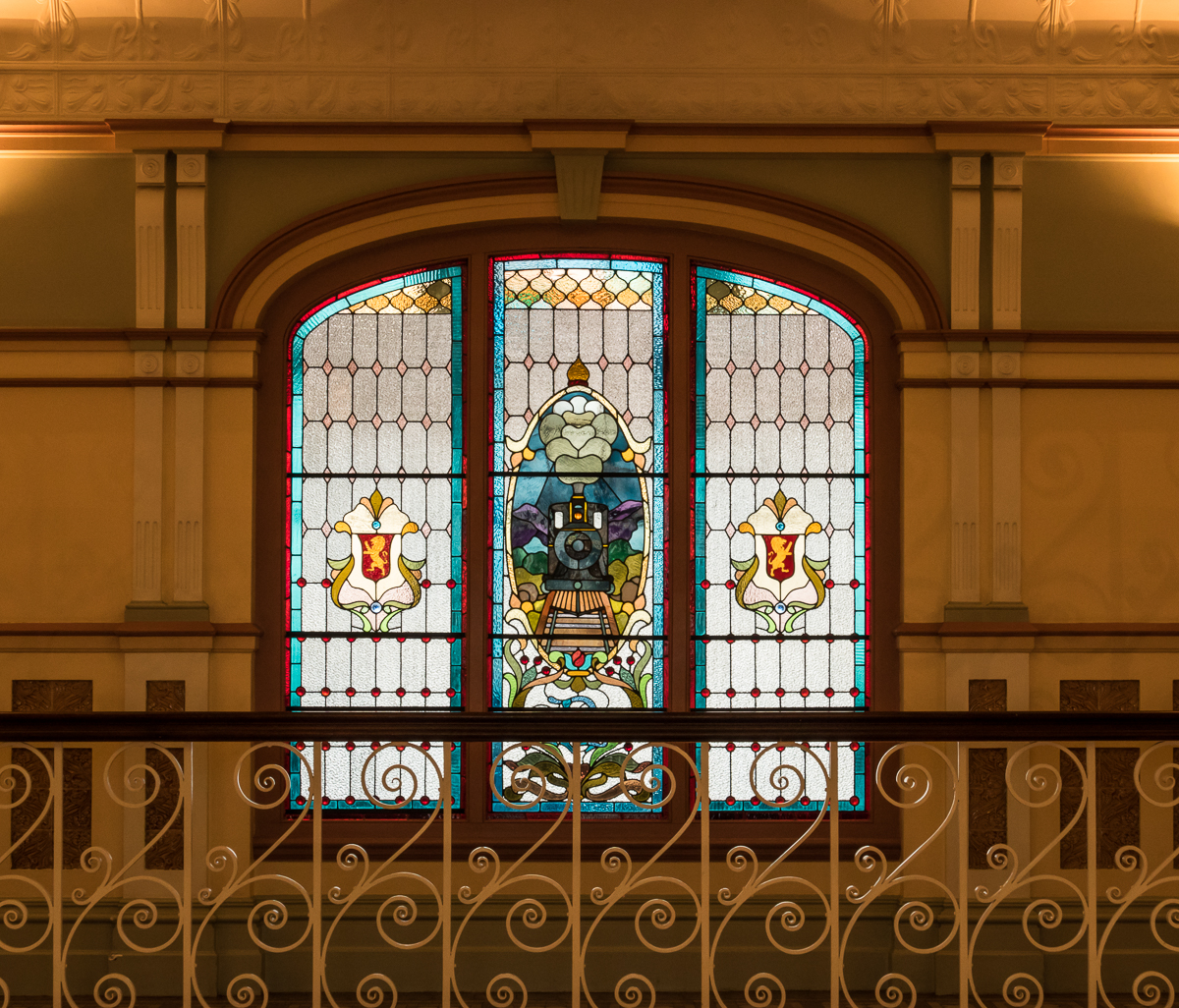 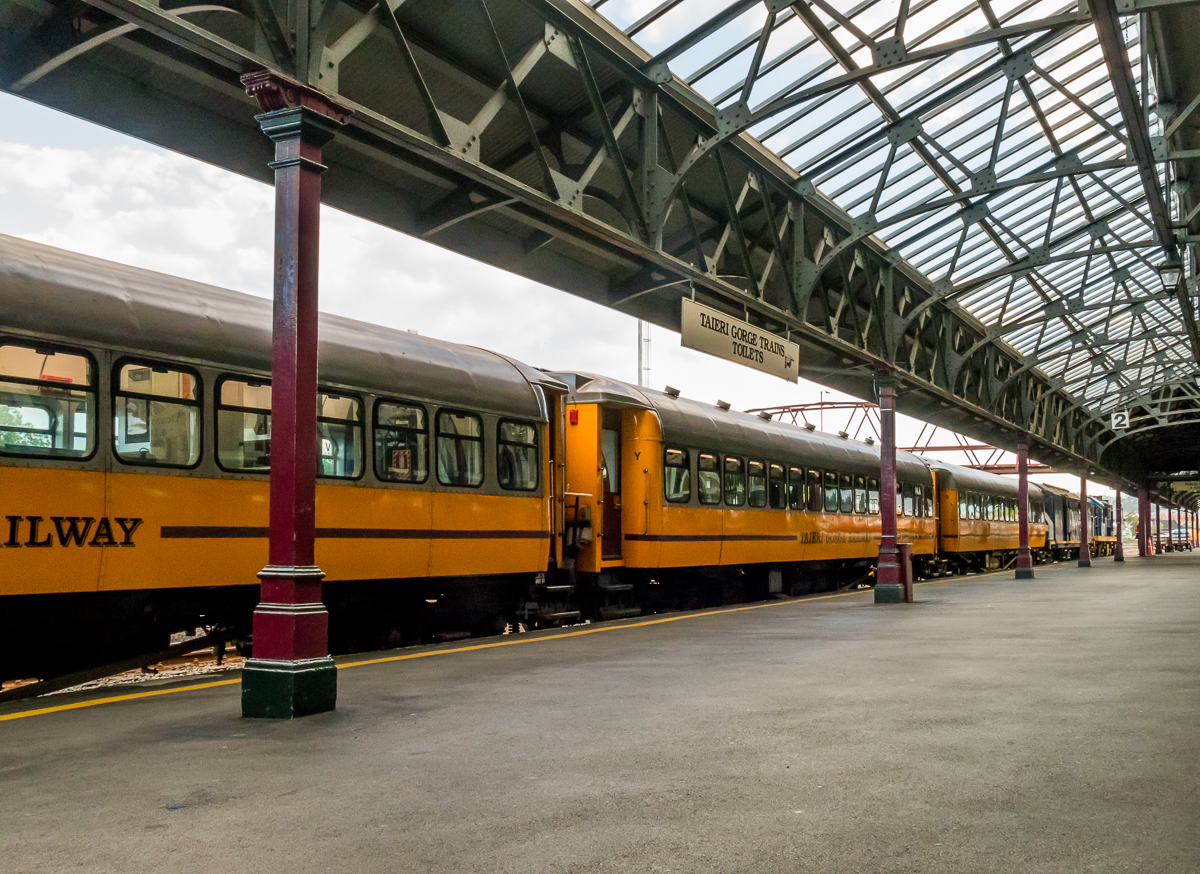 On the coast north of Dunedin, marooned at Koekohe Beach, are more than fifty huge fantastical boulders, some as big as three metres in diameter. They’ve been called variously hooligans gob-stoppers, aliens brains, and the bowling balls of giants. They are lumps of sediment bound together by mineral cement that took four million years to grow in a pile of mud about sixty million years ago. Eventually they were exposed by erosion and rolled down to the sea. And there they sit, ancient motionless marbles, the plaything of tourists. 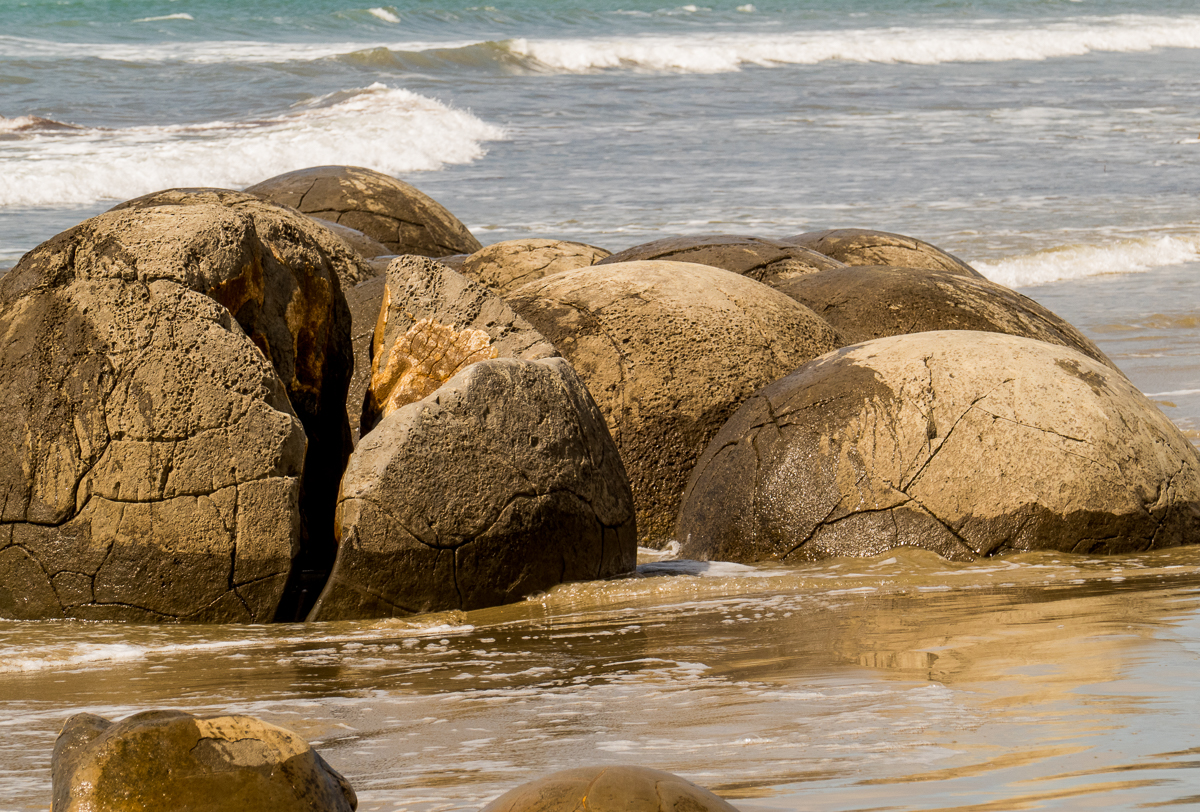 The boulders were fun, and fascinating, but I was as much taken with the tangled beauty of the beach debris of shells, driftwood, and unusual brilliant pink seaweeds. 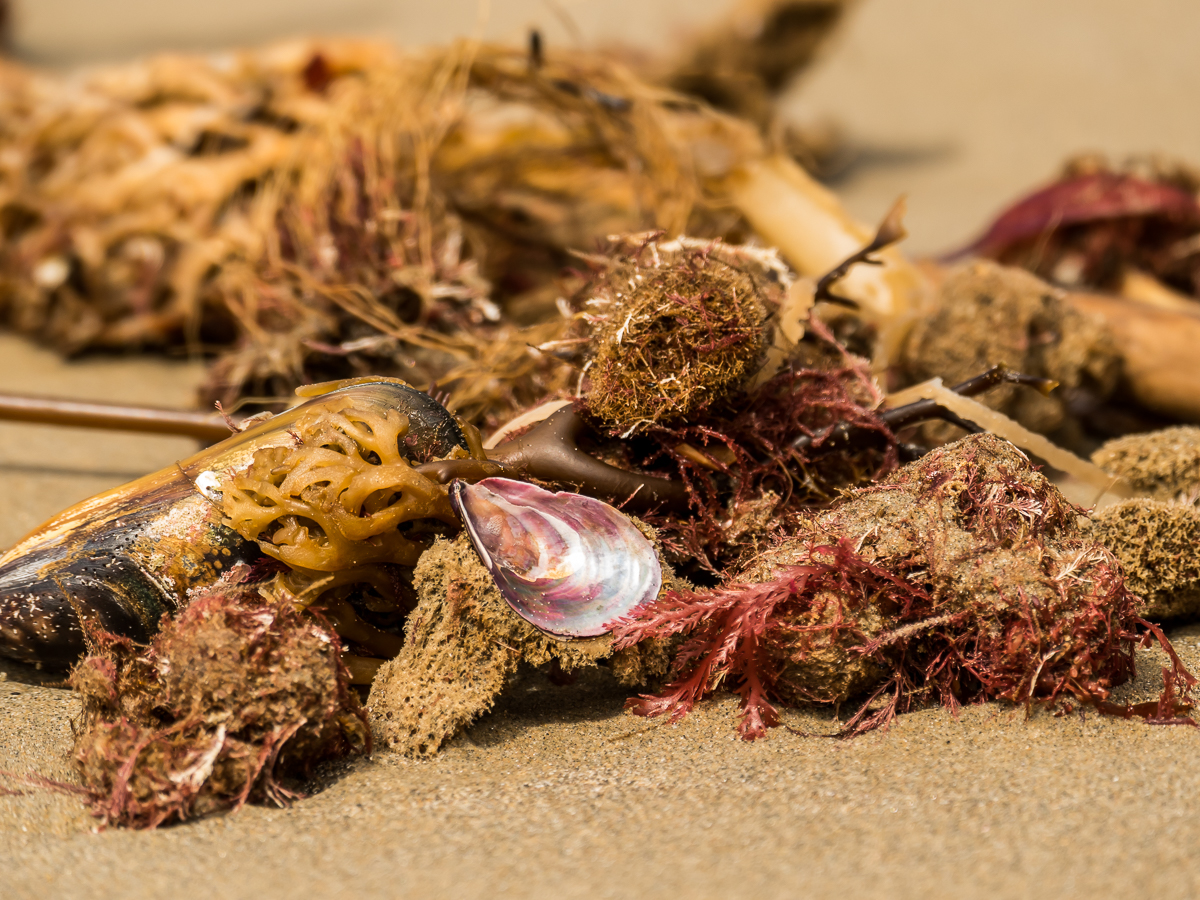 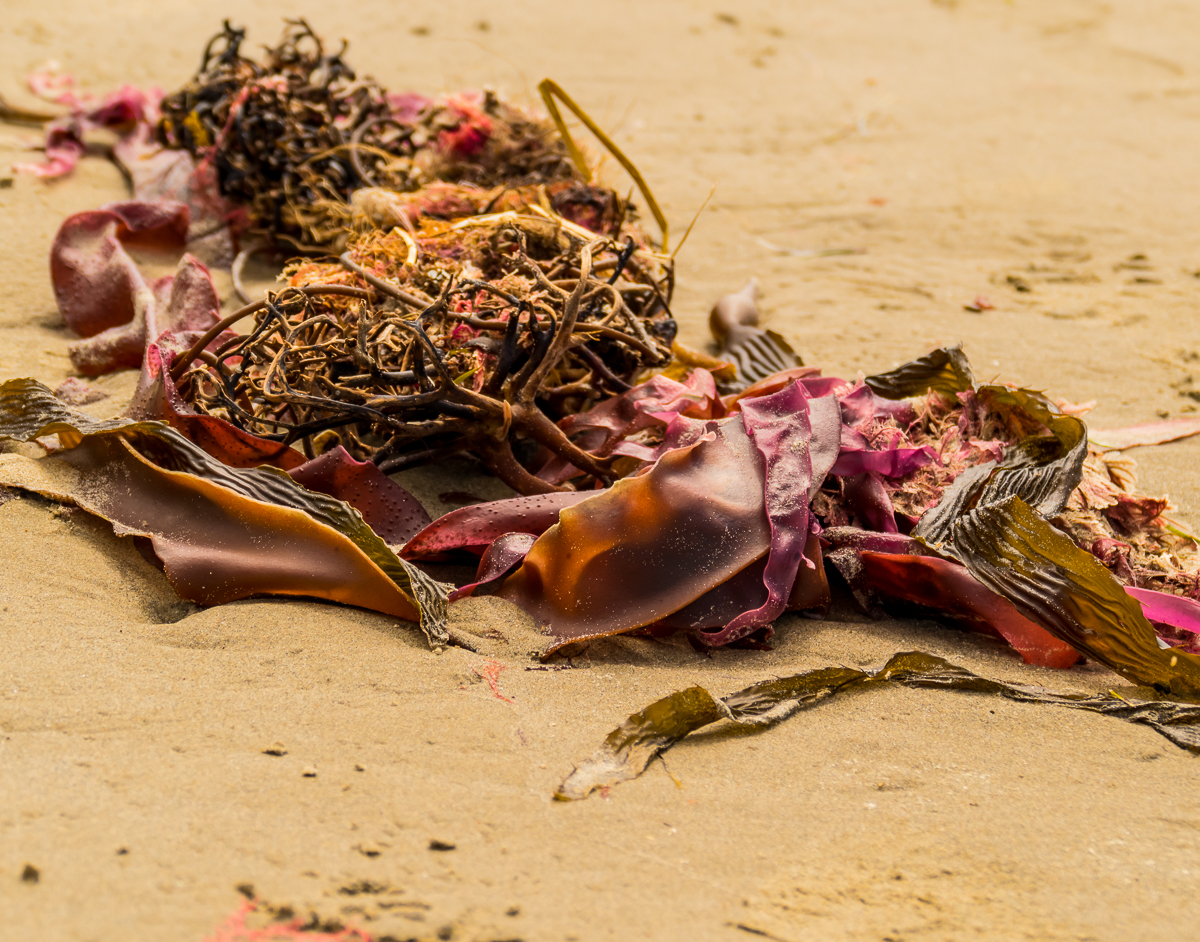