Vancouver from Queen Elizabeth Park
Greater Vancouver is dominated by mountains to the north, and to the south by the bodies of water that define its regions. Vancouver Harbour and Burrard Inlet separate West and North Vancouver from the downtown core, the West End and Stanley Park. False Creek forms the southern boundary of the downtown peninsula, and further south the Fraser River and its delta flow to the sea. On a clear day, if you look south, you can see Mount Baker all the way down in Washington. It’s one of the most magnificent natural settings of any city in the world. Of course being in the Pacific temperate rain forest area means a lot of rain. Most of the winter we see only grey, but that’s better than seven months of snow, and it makes Vancouver very green and lush. On a sunny day, and there are quite a lot of them, it’s absolutely glorious.

Don took this photo of Mt. Baker from the top of the hill in Queen Elizabeth Park.

Rain rain rain. It’s not called the Wet Coast for nothing. It rains nearly half the days from November through March, though I swear I remember it rained every day one year from October through May. On the other hand I also remember a year the sun started shining in February and didn’t stop until the end of September. But that was a long time ago, until this past summer. From when we arrived back at the end of May until the end of September, and even some days in October the weather has been a warm golden sunny blessing.

I think this guy is a binner.

Binners are people who make a living, or supplement their income, collecting saleable items from back alley dumpsters, and returnable drink containers from public garbage bins. They do our city a great service in recycling. I don’t think he is homeless. He looks strong and healthy. I love his black velvet coveralls and jewelery. I love most of all the unexpected hood ornament on his DoggyRide buggy. A bewildering and amusing and slightly creepy juxtaposition. It’s sort of pretty and cute, but at the same time it reminds me a bit of Chucky who’s not very nice. It was so completely surprising. I’d never seen anything like it, but some time later I noticed another man with a shopping cart with a similar hood ornament, and then another. It must be a thing going round. English Bay is behind him, and beyond that the high-rises of the West End, one of the most densely populated areas on the planet. We were moving that day from one housesit to the next and had cleaned out the fridge. There was one beer left in a six-pack, which Don didn’t want, so we put the whole pack on the ground next to the bin. I was intrigued to see who was going to have the surprise of a free beer. We sat enjoying the sun and the water and the music coming from the bench next to us. A man, probably from somewhere in Eastern Europe, was playing the accordion as a woman accompanied him singing traditional songs. What a wonderful visual and cultural stew it was. I hope the man in black coveralls enjoyed his beer.

Another West End moment: My friend Thomas was giving me a photography lesson. We were sitting on a bench by the water talking about cameras and this guy comes by all chatty. I’m happy he and Thomas get into a conversation. Well him mostly, with occasional prompts from Thomas. I don’t remember what they talked about. I’m happy I have so much time to photograph him. He may be homeless. I suspect he may be a little crazy. He was definitely enthusiastic and passionate and entertaining. I think he enjoyed being photographed.

A quiet moment at Jericho Beach: my niece and her nephew.

Vancouver has a truly diverse population. Half the population is of European descent, and nearly one third of Chinese descent. The rest? Indian, Filipino, Vietnamese, Japanese, and many others. I photographed these two women on one of the tiny passenger ferries that move people around False Creek. They may be tourists or they may be locals. Sometimes it’s hard to tell.

Coffee culture is a big thing in Vancouver. Comfy seating, luscious treats, good wifi, and well-brewed hot coffee made any way you want it. This is what I ask for: extra hot twelve ounce no foam soy latte half milk half water. Don drinks tea. We sink into deep armchairs and eat humungous buttery cookies. Each of us with the local free paper in hand, I do the crossword and Don does Sudoku.

In most parts of the city there are great cafés, but Main Street, Downtown, and Commercial Drive (known simply as The Drive) deserve a special mention. In a café in Steveston, playing with my new camera, our friend David takes a shot of this young woman, then I take a few too. She seems oblivious to us though we are sitting close by. I think this is one of my photos, though it could be one of David’s. 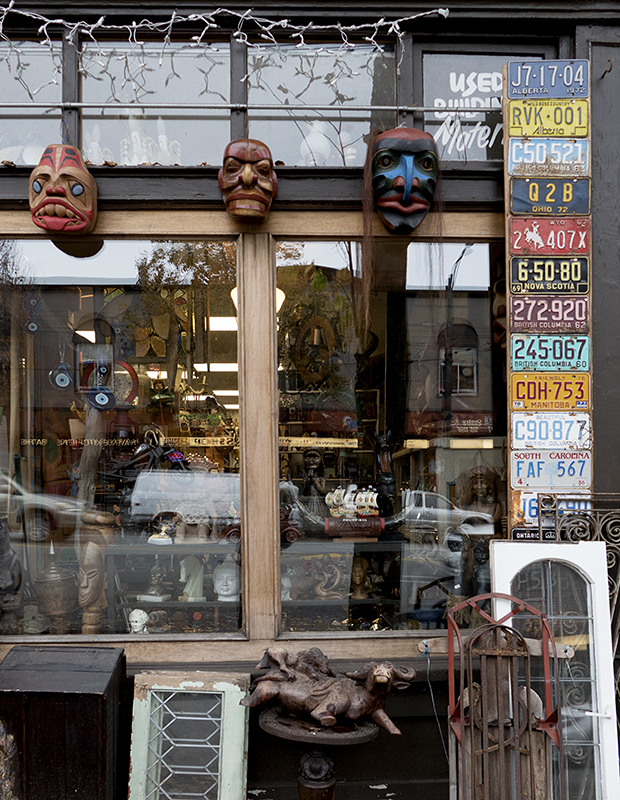 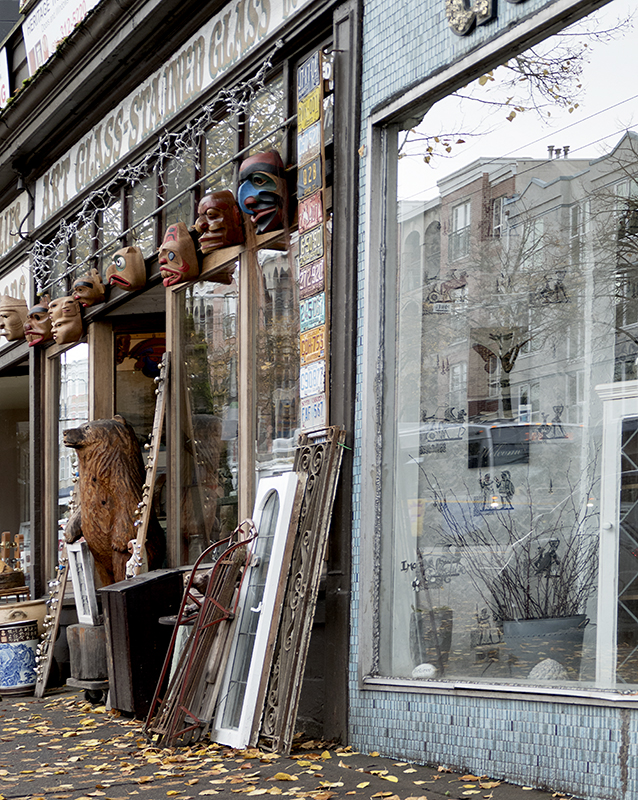 In Burnaby we housesit in a beautiful house that backs onto a kilometer long forested green space established to protect a salmon spawning stream. That is so typical of the Vancouver area – protecting the environment, protecting the salmon streams. The boundary of the back garden of the house is formed by the deep presence of tall strong trees, abiding silent custodians of the land and home for countless birds. Following the habit of the homeowners we keep the hummingbird feeder filled with sweet liquid, and daily put out a handful of peanuts on the deck for the blue jays. The blue jays swoop in stuffing their gullets with peanuts, frequently snatching up as many as three at a time before they fly off again. The hummers, of course, are fast as lightening, rarely still, and extremely territorial. 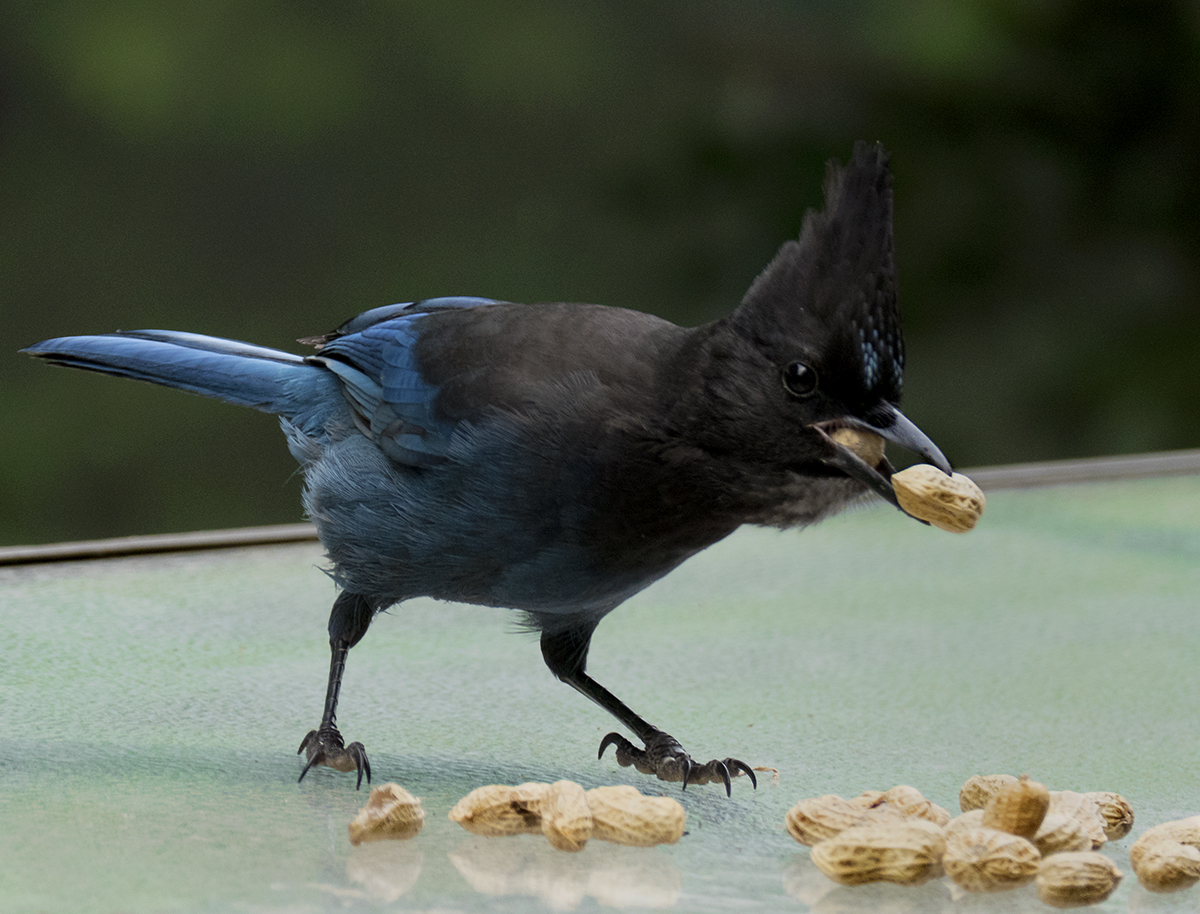 Granville Island is one of the biggest tourist destinations not only in Vancouver, but in all of Canada, attracting over ten million visitors each year. Despite the name it’s not an island. It was originally sand bars used for fishing by the First Nations people of this land. Then later, dredging from False Creek filled in the area forming a small roundish peninsula under what is now Granville Bridge spanning across False Creek to the downtown core. This undeveloped chunk of land became home to factories and sawmills. After the post war decline gradually the factories and mills vacated, and by the seventies plans for a pedestrian friendly island were formulated giving rise to the fabulous urban redevelopment seen today.

Granville Island is a foodies’ paradise with over seventy places to eat ranging from high-end restaurants to gourmet take-aways to cafés. There’s a public market selling every kind of food imaginable from local fruits and vegetables to artisan breads, pastries, cheeses, smoked salmon, and I’m getting hungry. There’s a microbrewery, an artisan saki maker, artists’ studios, a weaving studio, and small shops selling everything from hand-crafted paper to hand-crafted hats. There are three theatres, several art galleries, a hotel, a community centre, a water park, and a yacht marina where you can get a whale watching or sea kayaking tour. On fine days there are musicians and buskers to rival the best in the world. And of course there’s always the water. It’s not an island but it is surrounded on three sides by the waters of False Creek plied by tiny passenger ferries carrying people along, and from one side to the other of the creek that’s so much more than a creek.

On sunny days one of our favourite things to do is to walk the half hour from Cambie Bridge along the path by the water to Granville Island and buy ourselves something luscious to eat and sit outside watching the passing parade of boats, birds and people, while listening to a man with a beautiful voice playing guitar and singing in French. 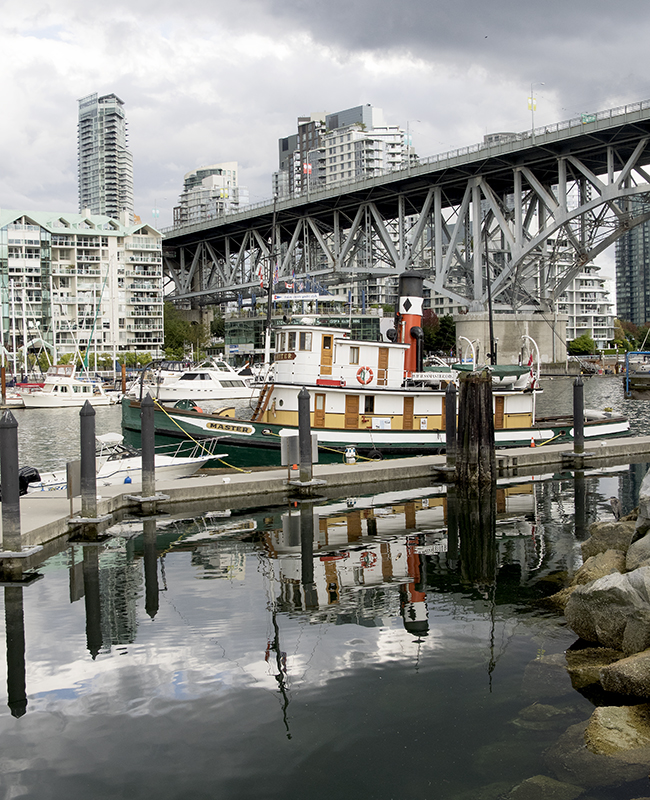 and a preening heron.

Inside the market – time for food.

I don’t know what kind of bird this is, but he managed to find his way inside and help himself to lunch. Anyone’s lunch.

All along the path from Cambie Bridge to Granville Island are parks and gardens. In one of the parks there are three huge shiny eggs. One is red, one yellow, one black. Modern sculpture. From a distance I find them ugly: big, uncompromising, jarring in the natural environment. But up close they’re pretty cool, and kids love playing with them.

The only company to survive the industrial era of Granville Island is Ocean Concrete. In keeping with the ethos of Granville Island, and indeed of Vancouver itself, it is wholly environmentally clean. It’s also surprisingly and wonderfully attractive. A concrete plant attractive? Yes indeed. Recently Brazilian twins Gustavo and Otavio Pandolfo were commissioned to paint the six massive silos, with a delightful and whimsical result. 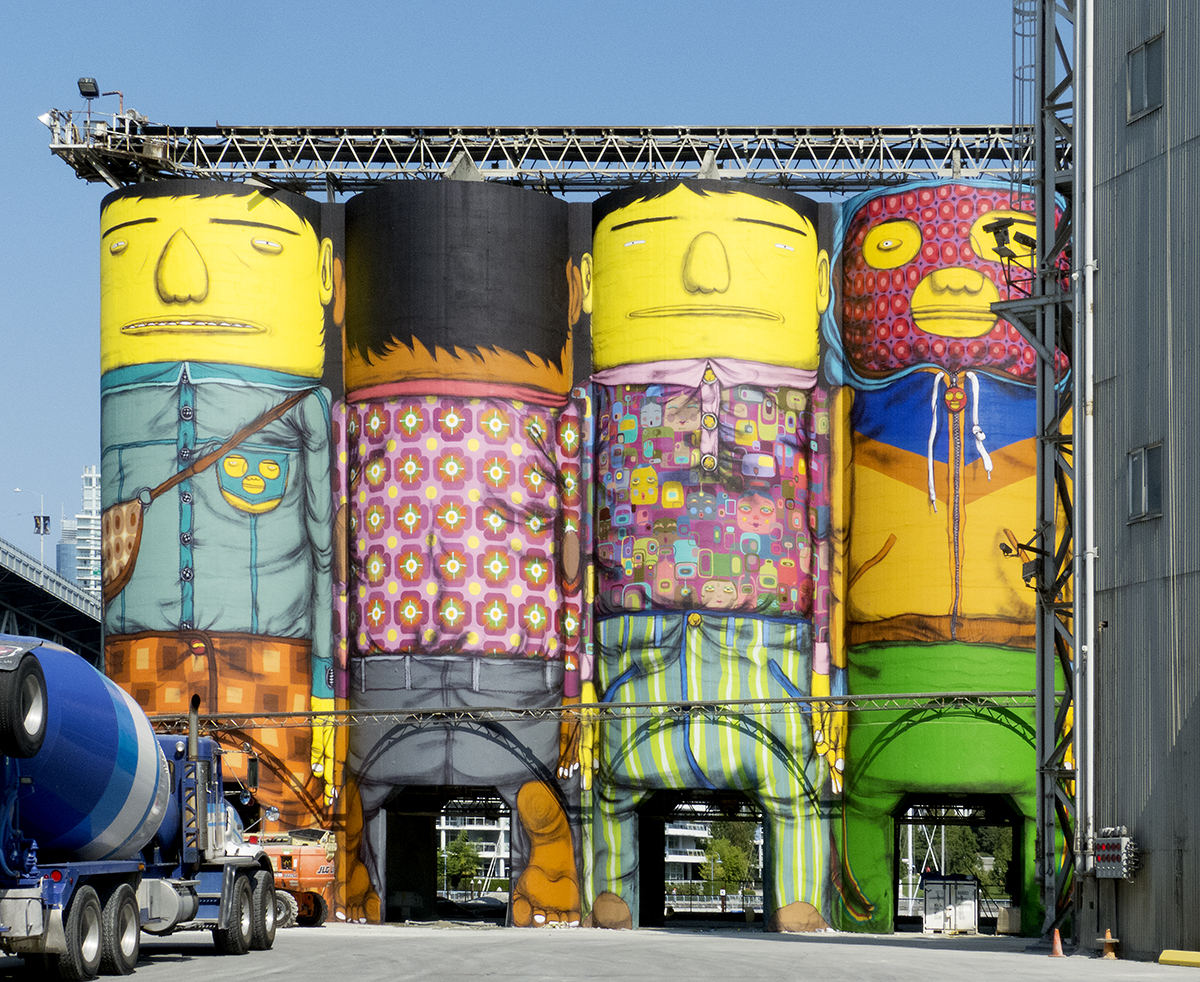 The silos are so big that the concrete trucks drive in underneath them to be filled. Even the trucks are decorated. 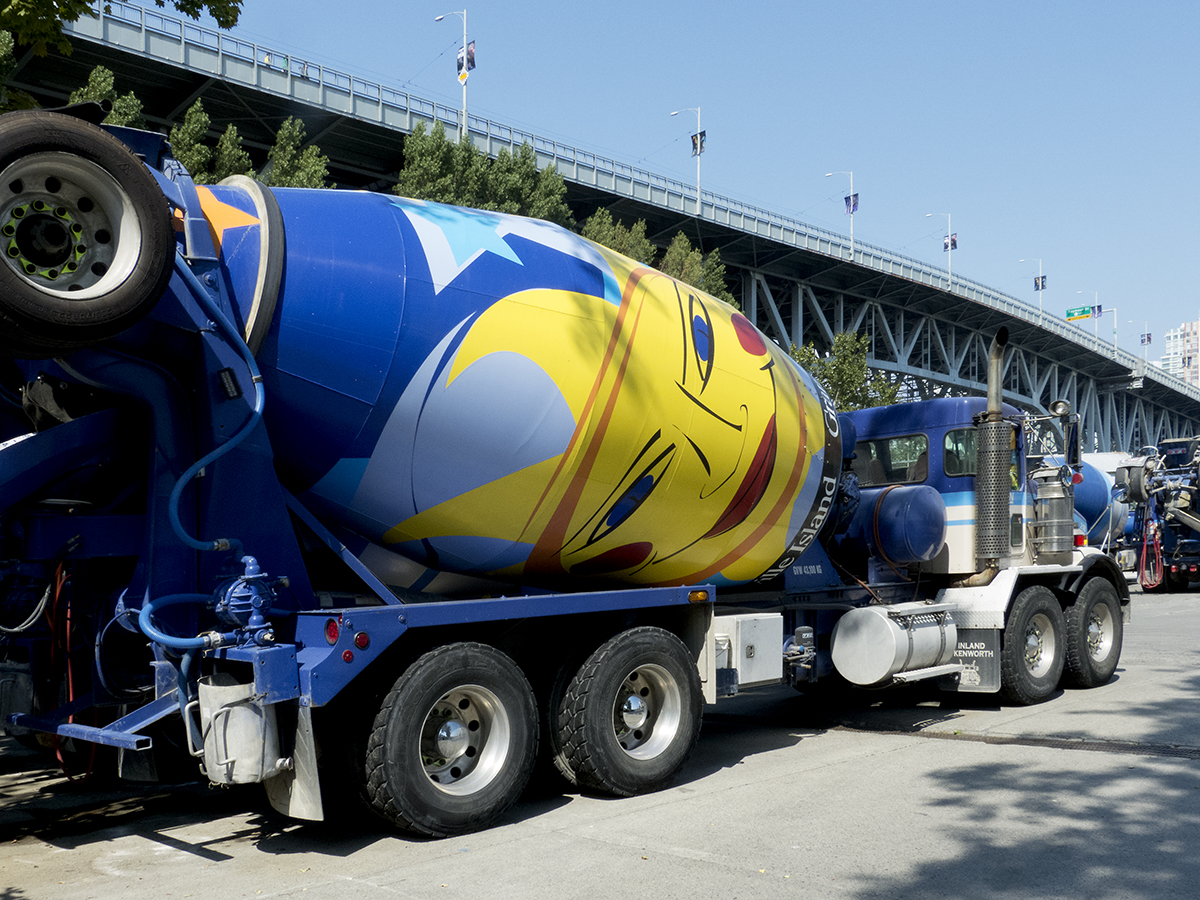 There is also a truck painted as a giant strawberry, one as a giant corncob, and another as a bunch of asparagus.

One more post to come about Vancouver – summer flowers and fall colours. And no description of Vancouver could possibly be complete without the inclusion of Stanley Park, one of the biggest urban parks in the world.
All words and images by Alison Louise Armstrong unless otherwise noted
© Alison Louise Armstrong and Adventures in Wonderland – a pilgrimage of the heart, 2010-2015.

43 thoughts on “Our Vancouver – a love letter”