December 2-8, 2012. I’m glad Varanasi was the last stop on our six-week odyssey through India. Everywhere else we’ve been, including the camel fair in Pushkar, has been amazing and exciting and enriching in many ways, but nothing compares with Varanasi. It is a holy city on a holy river. Nowhere else in the world is a river worshipped as a god, and that sense of devotion pervades Varanasi. It is a special place, and everyone who lives here knows it. And many come from all over India to live here because of it. We’d saved the best ‘til last. Varanasi is jaw dropping; more than any other city we’d visited in India.

It was only after arriving that I found out I was in Benares, a city I’d known about for years. When I say “known about” I mean that it had crept somewhere into the depths of my psyche as the holy city of Benares way back when I was a child at the same time that I learned of cities called Bombay and Calcutta. I didn’t understand what was meant by holy city. To my child’s mind that was something strange and foreign, and nobody explained it to me. But somehow knowing that I was in Benares made it different, more special: I am in the holy city of Benares! The city is still known as Benares, as much as Varanasi, and I prefer Benares, probably because of the intrigue created in me as a child. Apparently it is one of the oldest, if not the oldest continuously inhabited city in the world. When walking down the narrow alleys in the old part of town above the Ghats it’s easy to believe that.

When we arrived we had to walk for fifteen minutes to get to our hotel. There’s a limit to how far cars can get into the town. There were two porters to greet us on our arrival. We had four cases between us, and were a bit perturbed as to how they were going to carry them all, but they nonchalantly, seriously, nonchalantly piled two apiece on their heads and set off at a great rate. They were probably carrying about forty kilos each. We were almost running to keep up with them. On and on they went through narrow alleys, past the cows and cow poop, people, dogs and motor bikes: twisting and turning, heading down some stairs, ducking low in places, until finally we could see the river, and a kind of dirt shelf with more cows, and just a few steps lower, our hotel.

Most of Benares is much like any other Indian city and we didn’t spend any time there. But the old town, the original city down by the Ganges, by the Mother Ganga, is something else. It’s a maze of narrow twisting alleyways that grew organically over the centuries with no thought of transportation other than by foot or donkey. You can easily become lost. Our hotel was right down on the Ghats and overlooking the river so we knew if we ever got lost we just needed to head down hill and eventually we’d come to the Ghats and could walk along by the river to get home.

This first post will be about the town. In the next post I’ll write about life on the Ghats and life on the river. To separate the two has no real validity but I had to find a way to sort through all my thoughts and all my photos. To separate the town of Benares from the Ghats and the Ganga is like those lines on a map that separate one country from another, lines drawn after wars by men in other places, that have little relevance for the people that actually live there. Benares exists because of the Ganga.

The old town of Benares, even with it’s overlay of modernity such as electricity and motorbikes, cell phones, and the internet, still continues in much the same way it has for thousands of years. Laundry is done by hand, food is cooked over open fires, curd is made in the same way over fires in a tiny space inside a building that has existed for hundreds of years, and vendors still spread their goods on the ground for sale.

In this small space curd is being made – there’s a small fire under each pan.

We found the Brown Bread Bakery, with a sign saying “As recommended on TripAdvisor” – it was okay, but nothing special. The next day, further down the same alley we found the real Brown Bread Bakery, which has a fabulous rooftop restaurant, and lower down a lounge room where you could also eat. They have live music every night. We went there many times. At the time I wrote: Sitting amongst the cushions on the floor listening to the best live sarod and tabla music, while eating ice-cream with chocolate sauce. All is right with the world.

The narrow winding streets of Benares 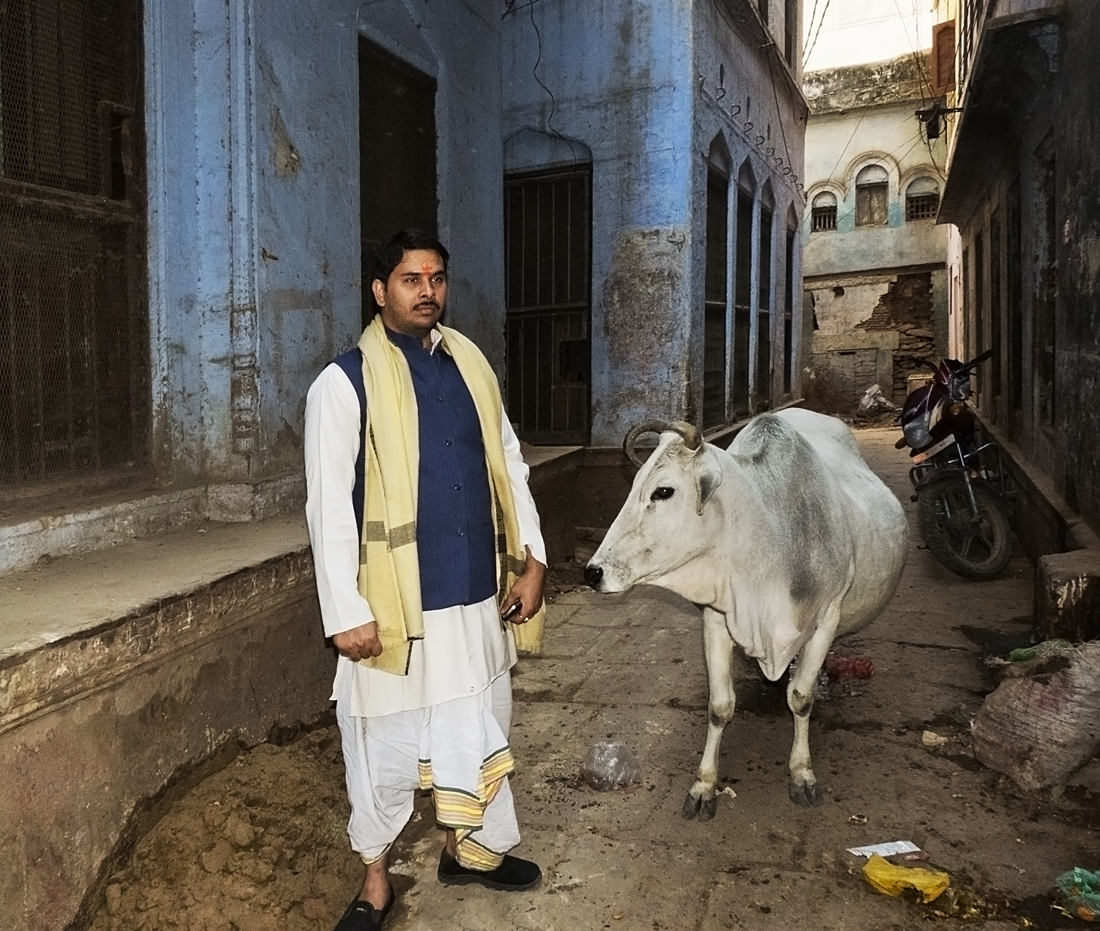 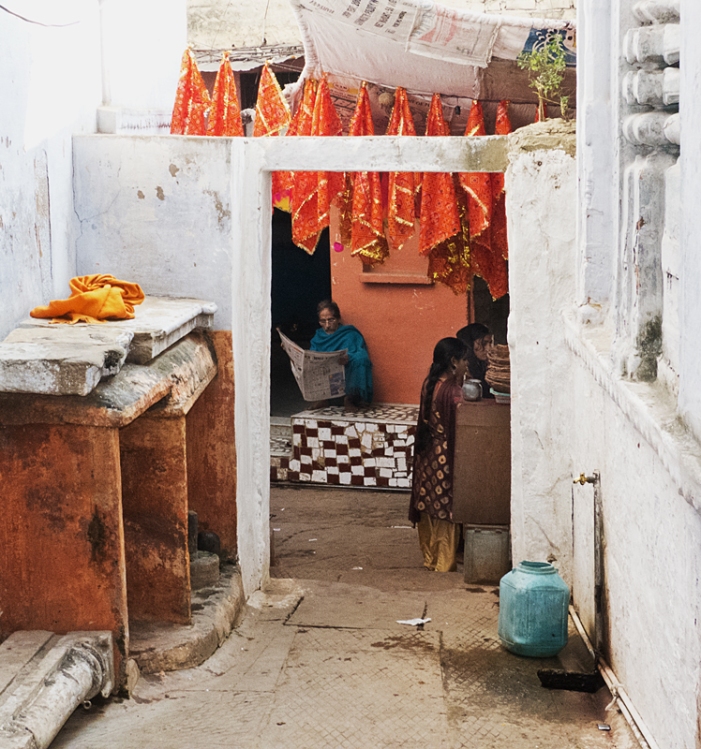 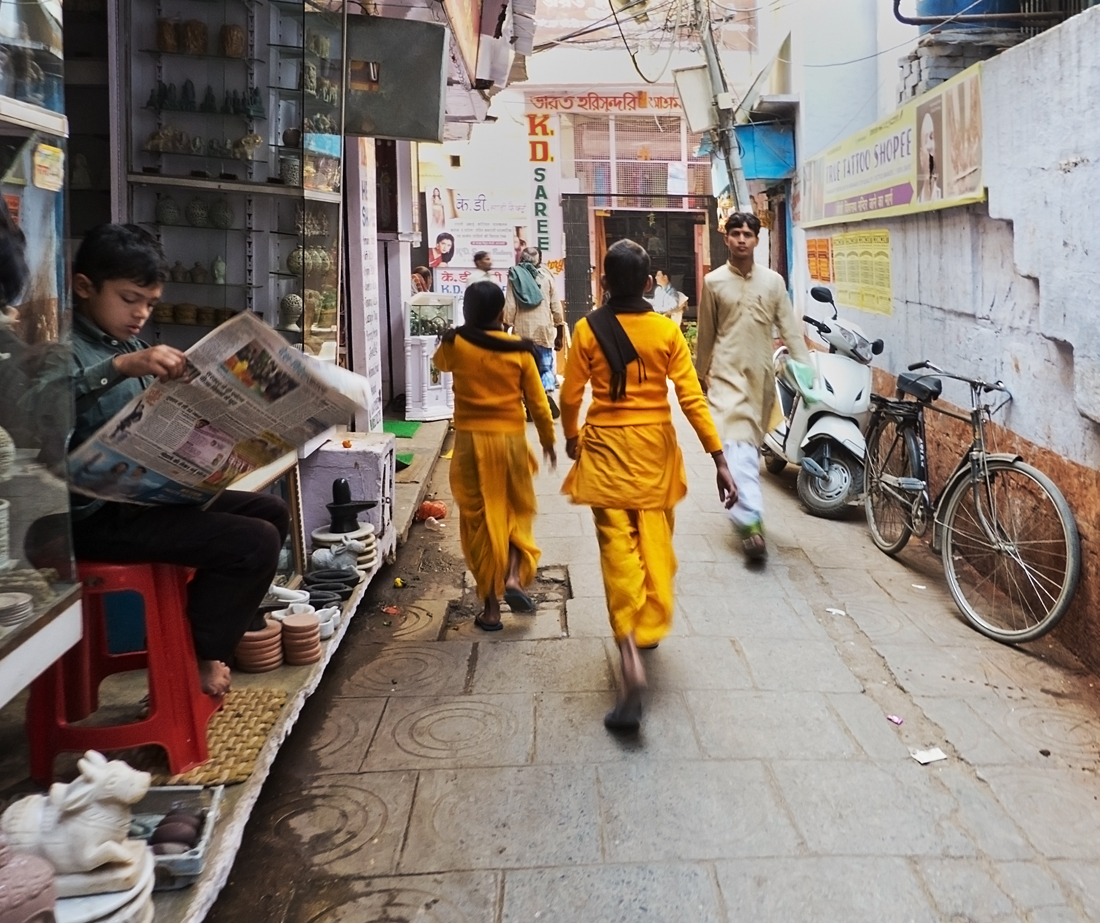 Getting some candy on the way home from school

We wandered the narrow alleyways, unconcerned about getting lost, curious about everything. We talked to people, went into temples, and got glimpses into the homes and everyday lives of those who live there. These are some of the people we encountered on our wanderings: 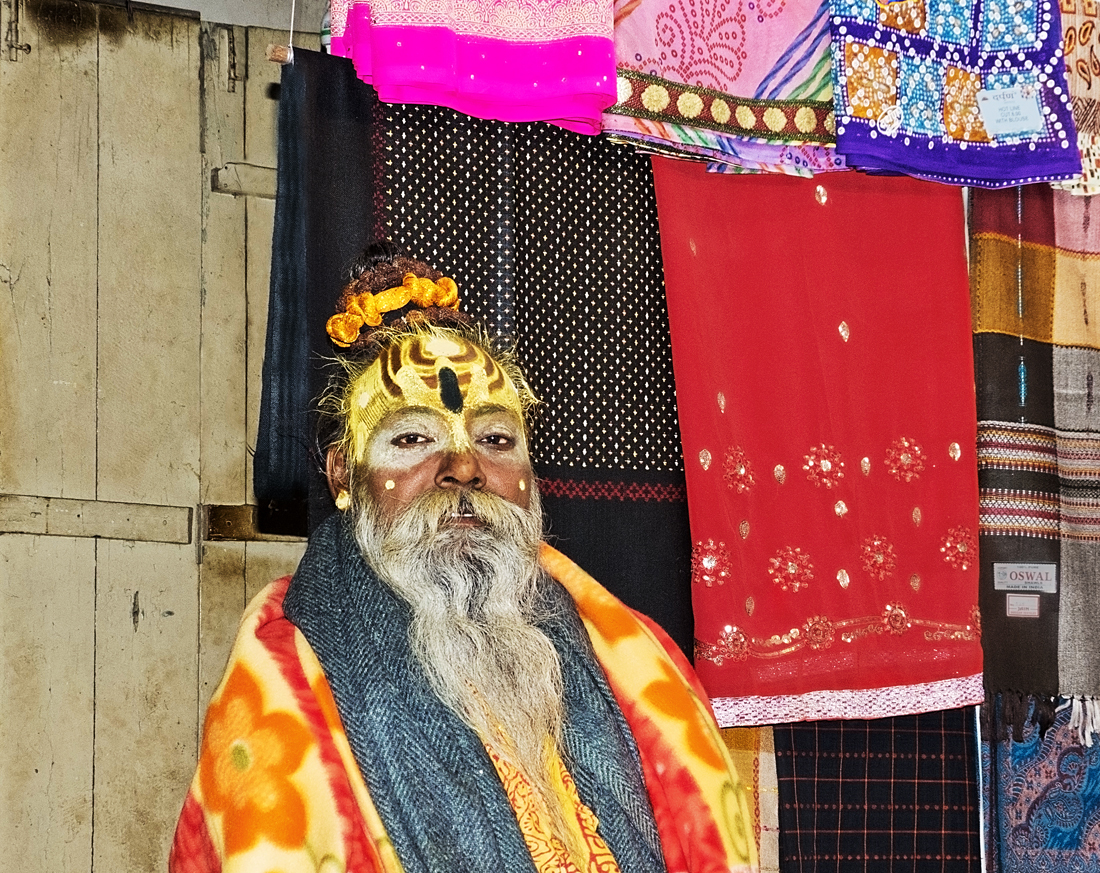 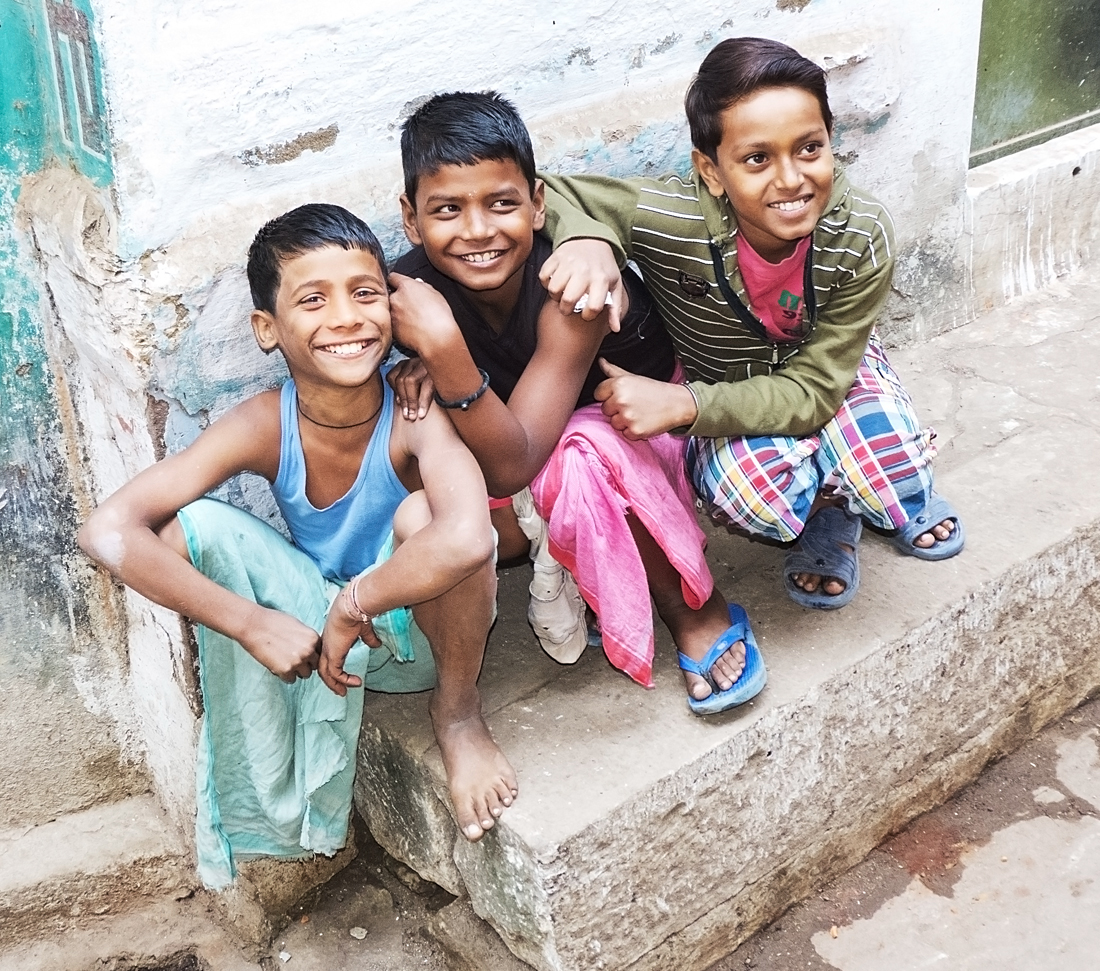 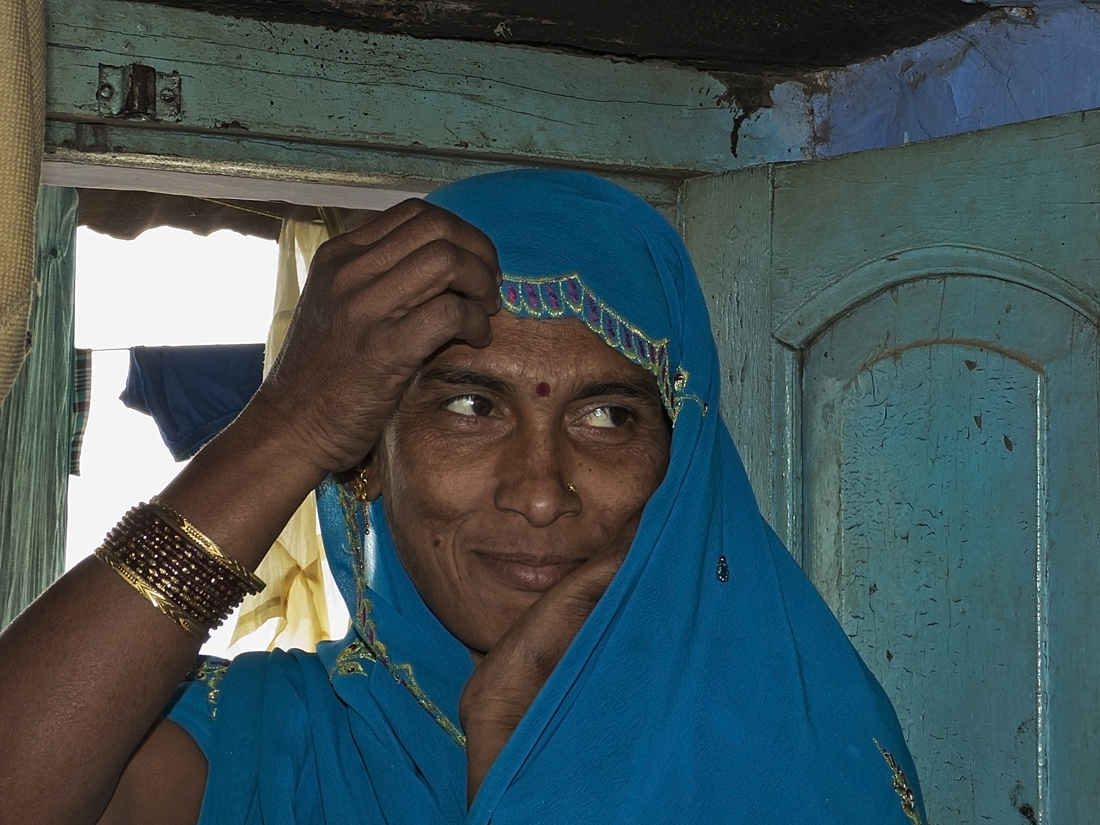 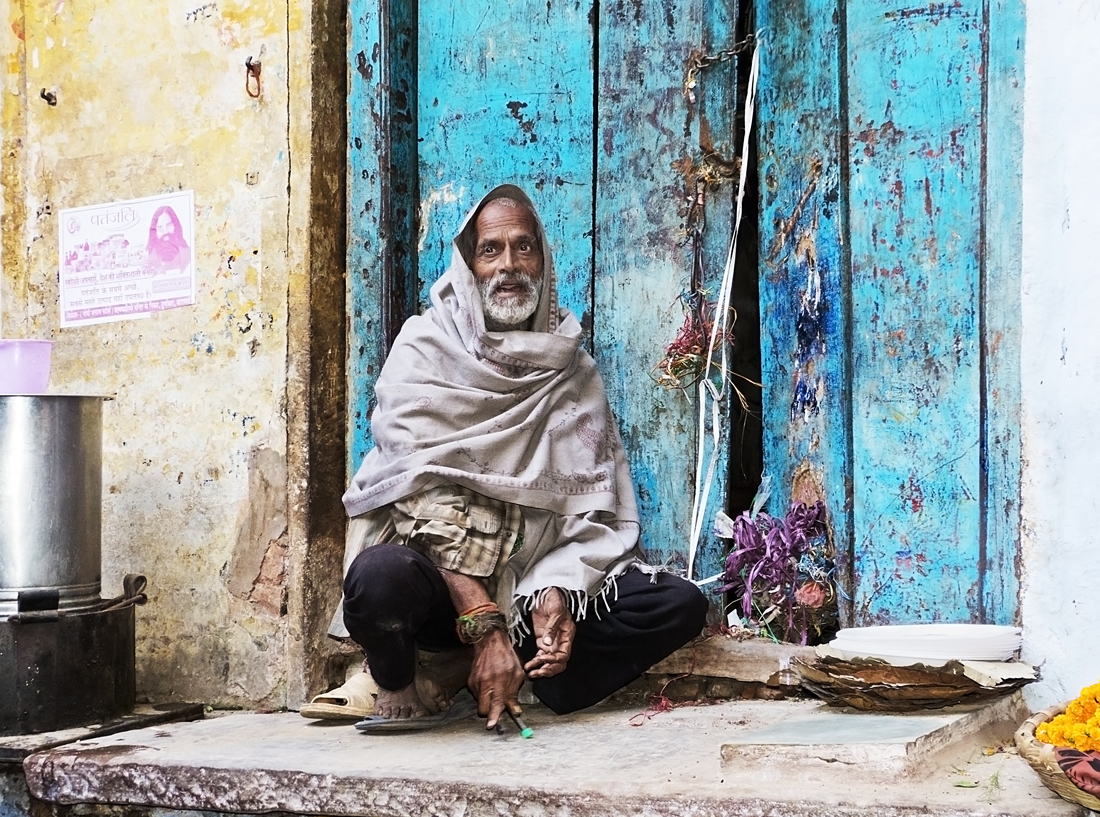 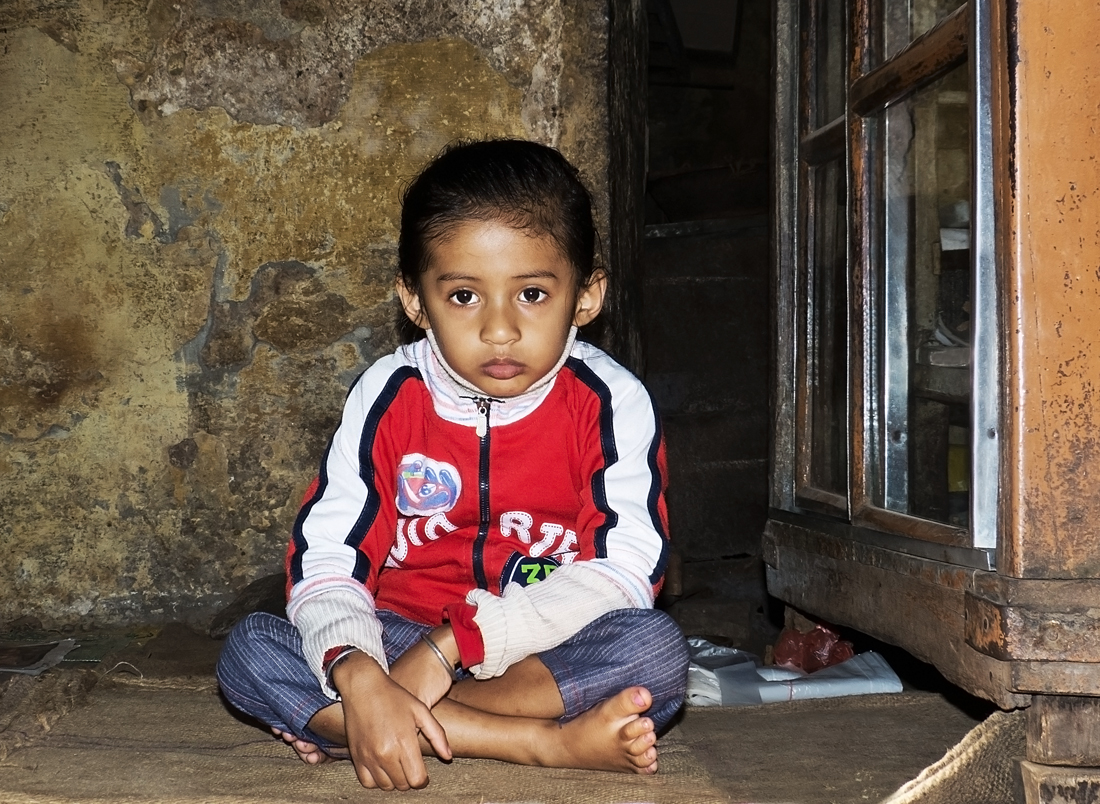 The interior of one of the many temples

Everyone has something for sale 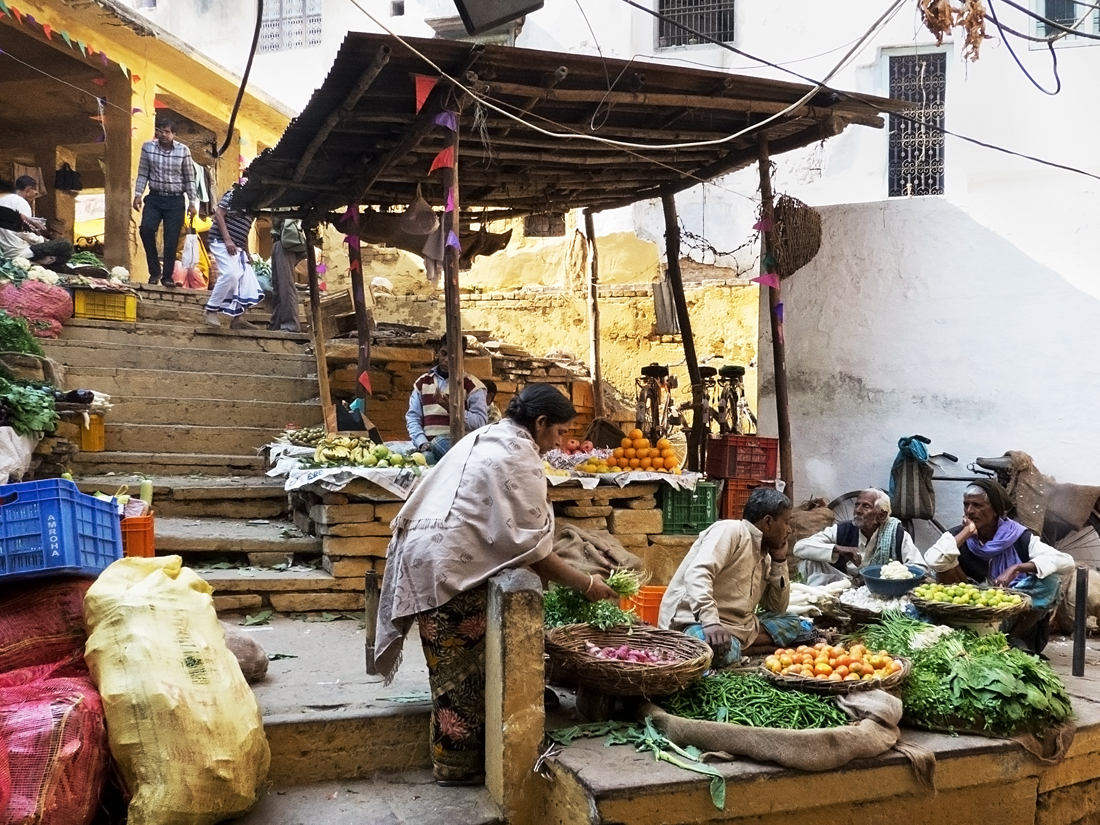 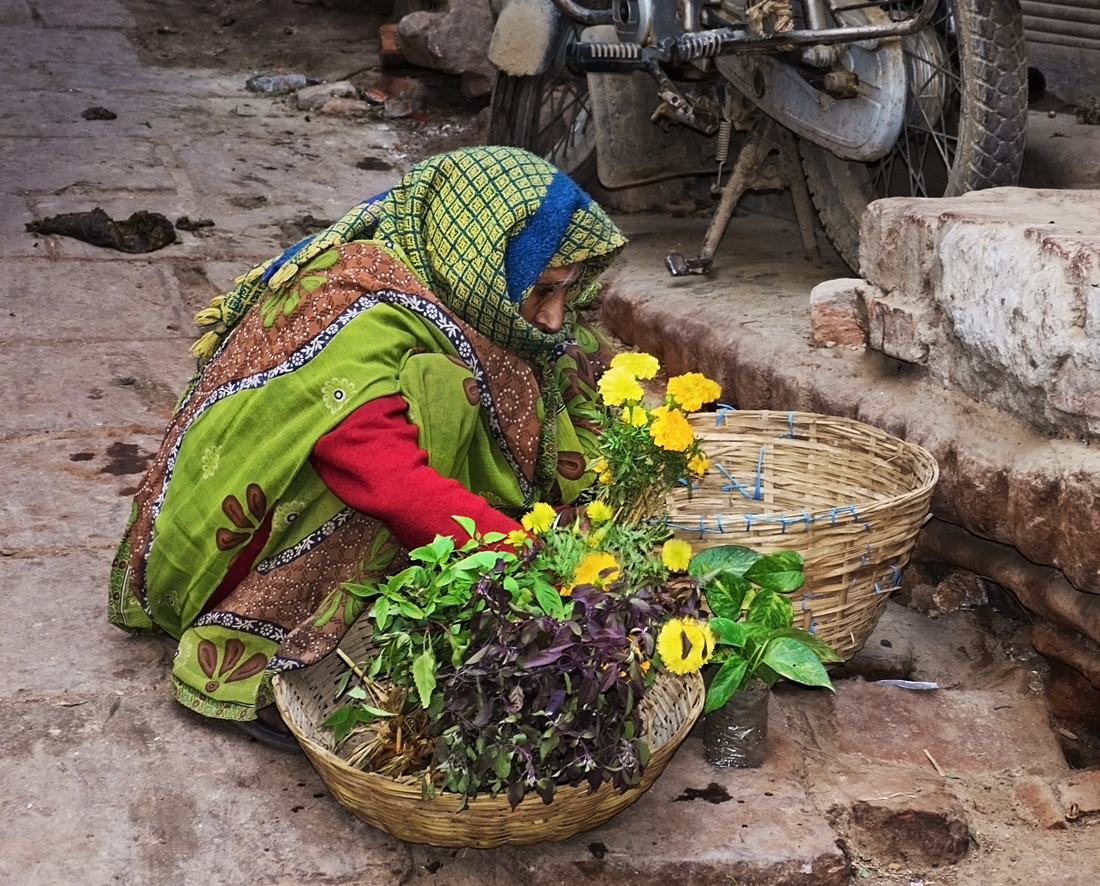 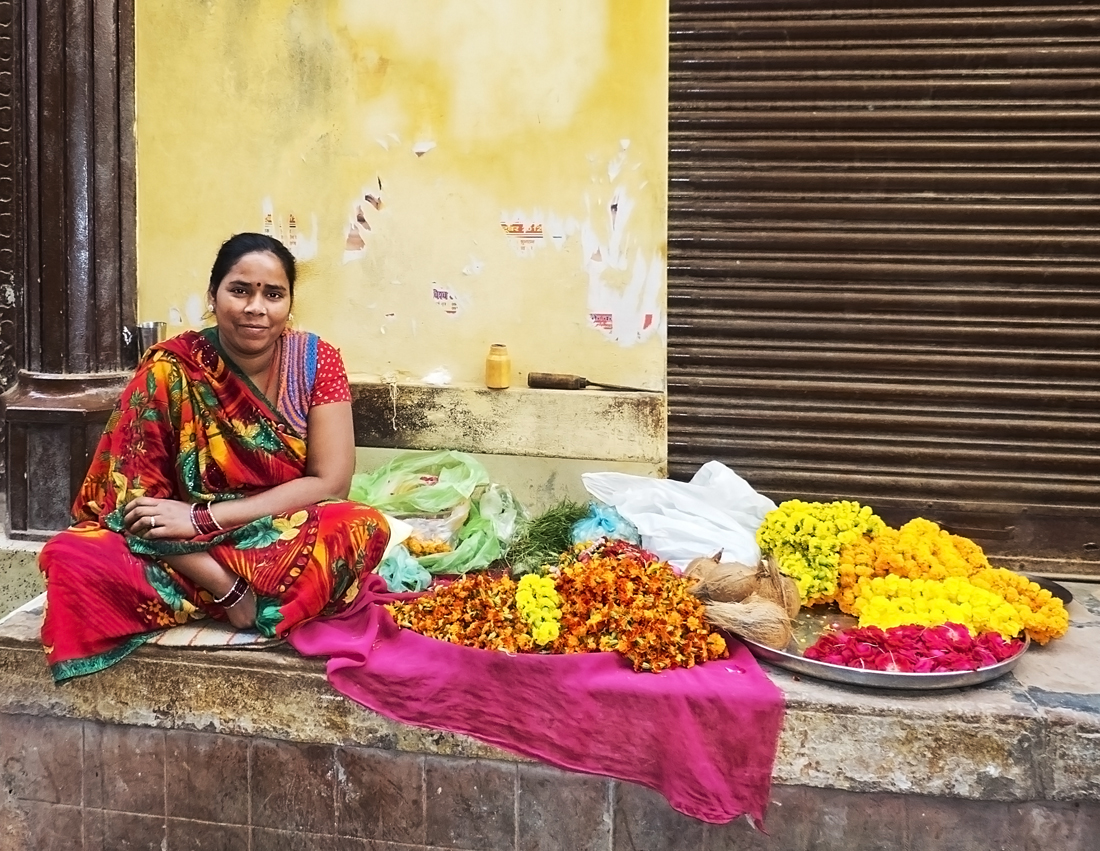 This man sits on a narrow stone shelf and makes little chewable packages wrapped in leaves. The main ingredient is betel nut, but other things are also added.

52 thoughts on “The Holy City of Benares”