In reference to the previous post, I’ll start by saying I was wrong about the Etrucsan dwellings in Castellina. I did a bit of research. They weren’t dwellings, they were tombs. No wonder they made me shiver. But not so bad really. Glad to realize the possibility that their homes were warmer and lighter than the dark cold stone rooms we went into.

Don did the research for our hotel in Venice. He found one that had good reviews and was only a short walk from the station. It was fairly expensive but he was really clear that that was the one he wanted. It made it all so simple. We got off the train, walked for about three minutes along the main concourse in front of the station, around the first corner into a narrow alley, or calle as they are called, and there was our hotel. We were given a lovely large-ish room, which we both thought was great, until 7.15 the next morning. We had a wake up call from the bells of the local church calling everyone to Mass, and our room was right next to the bell tower. After about 5 minutes they stopped and I thought I’d maybe get back to sleep for a bit, but off they went again at 8.15. So we changed rooms to a smaller one but a long way from the bell tower, and with the help of earplugs they never bothered me again. There are over 140 churches in Venice. Bells ring all the time.

We took one of Venice’s famous vaporettos, a water bus, to Piazza San Marco, crowded with tourists – both the vaporetto and the piazza. It was very busy everywhere until we headed away from the Grand Canal, and the main attractions. We wandered the smaller back streets where Venetians live. There were almost no tourists there. Amazing magical place. Why is it that most visitors to Venice, or any place for that matter, don’t go beyond the big attractions. There’s so much more to see. We found the same in Gamla Stan (the old town) in Stockholm. All the visitors were crowded onto the few main streets, and just five minutes walk away were many utterly charming empty streets to explore. We walked a lot. Then did more vaporetto riding on the Grand Canal, Venice’s only major highway. 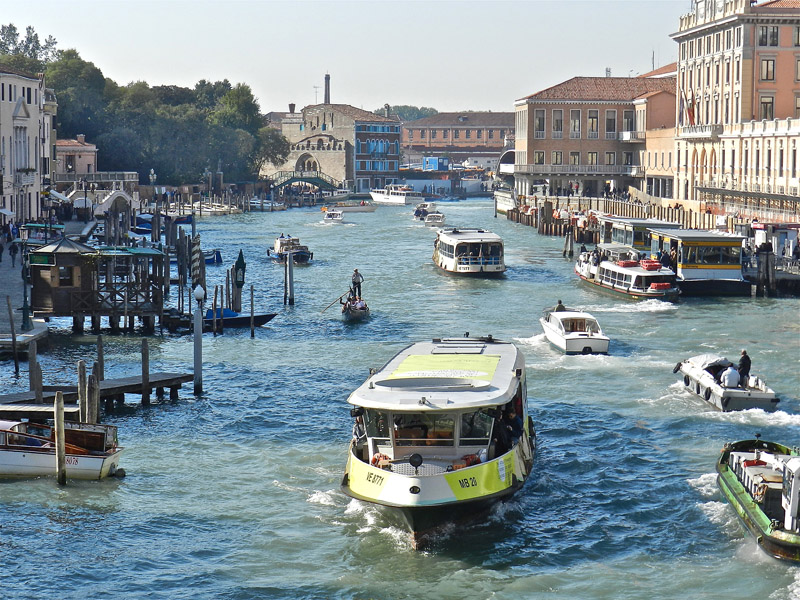 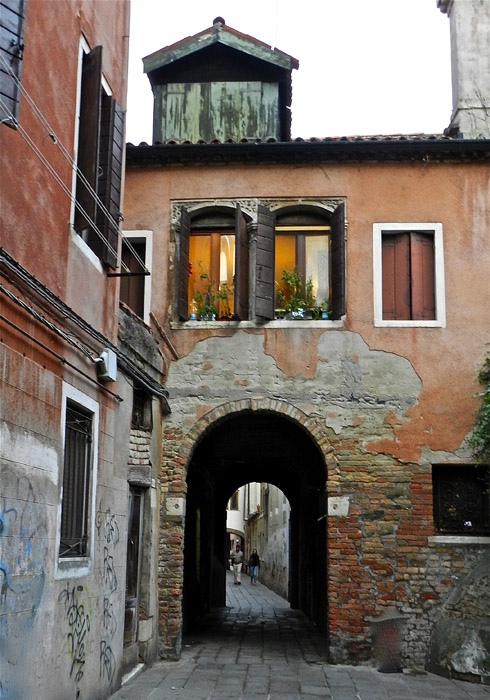 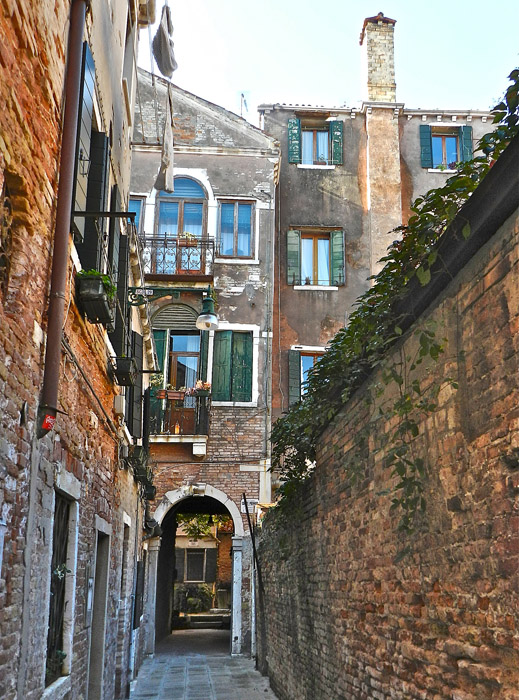 We asked the concierge at the hotel to recommend a restaurant away from the Grand Canal and the hoards of tourists like us. He laughed, in a tired kind of way, I imagine he’s heard that question a million times before, and explained that there’s 45,000 of them and one million of us. Anyway he did recommend a place. Perhaps we ordered the wrong thing for that restaurant but we were disappointed, and it was expensive. We had seafood risotto and there was no comparison with the one we’d had in Monterosso, which was fabulous.

We took a long vaporetto ride to the Lido, an outer island in the Venice Lagoon. The Lido is Venice’s beach. It was quiet there, the season obviously over, but it’s a charming place, and anyway I wanted to see the beach where “Death in Venice” was filmed. I imagine it’s completely different in the summer. Then we walked the back streets of Venice some more, came across a gondola repair shop, and had dinner at a restaurant near the hotel, which suited us much better than the previous night. 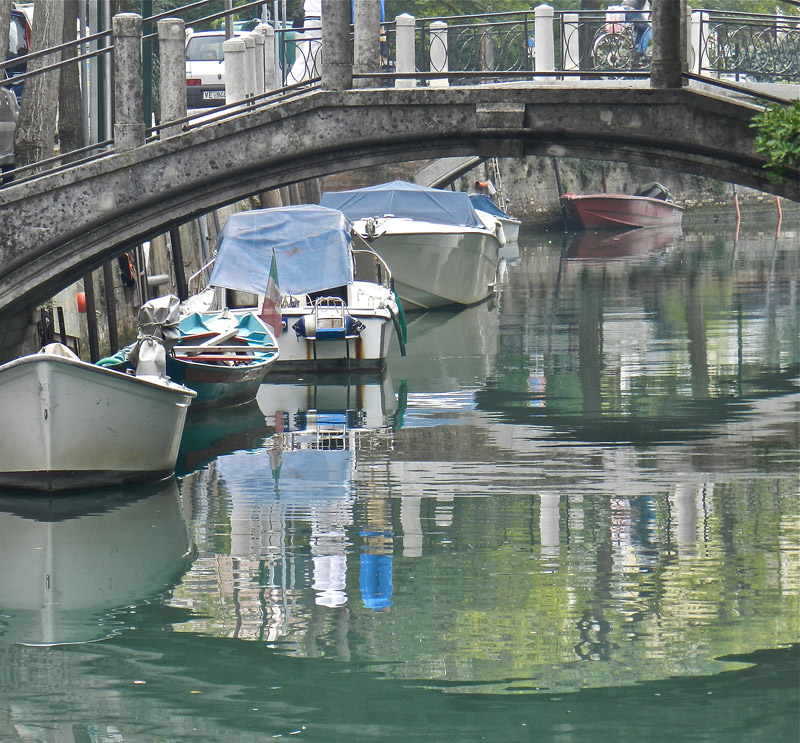 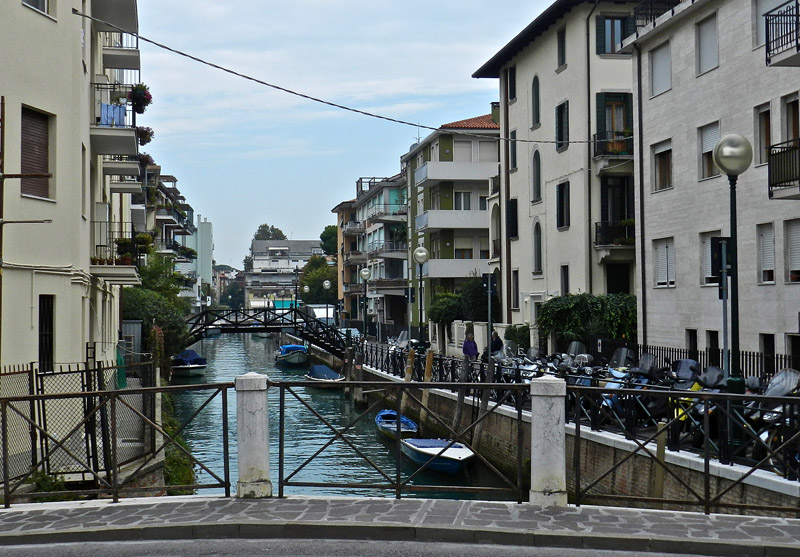 After dinner we both started searching the net for hotels in Rome thinking that would be our next stop. We couldn’t find anything at a reasonable price, and it felt like hard work for both of us. Finally we gave up. Then I had the idea that we should not go to Rome next but to Positano and the Amalfi coast. I’ve always wanted to go there, and the season ends at the end of October and many places close, so it felt right to go there for the last week of October and then go to Rome after that. This is how we go, making decisions along the way, “listening” for what feels right, what feels easy and what doesn’t, following intuition.

Venice Day three – raining raining raining. Spent the morning on the computer looking for and booking our next stop – hotel and trains for Positano and the Amalfi coast. It was all very easy, and I feel very excited about going there, both sure signs that we’re on the right track. After it stopped raining we got the vaporetto again to St Mark’s square and toured the Doge’s Palace, and walked over the famous Bridge of Sighs to the prisons – pretty grim. You’re not allowed to take photos in the Doge’s Palace but I took a few anyway. 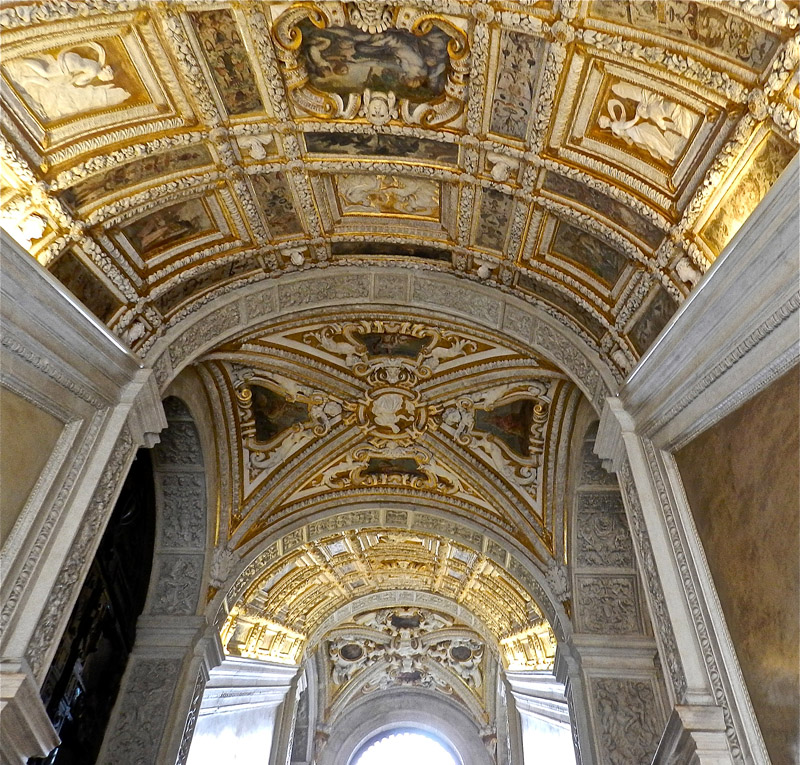 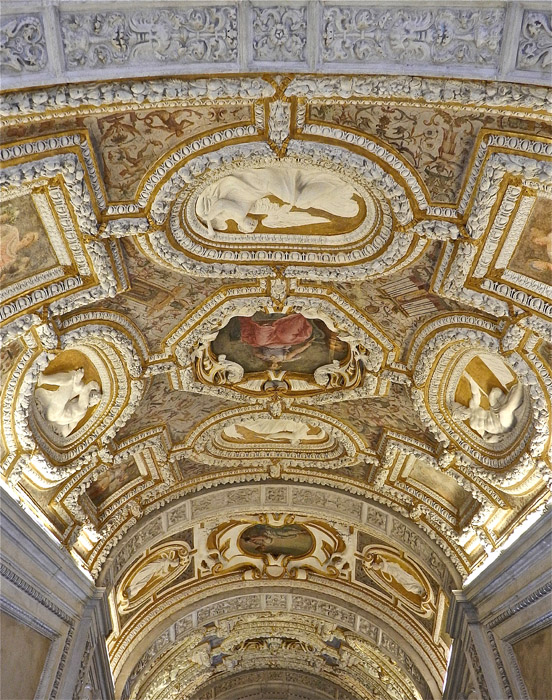 One night we went to an opera recital at the Venice Opera Hall. I know nothing about opera except what I’ve learned from watching figure skating for years. I can recognize the most popular pieces but never remember who they’re by, but I do recognize the names. The recital included various pieces from Puccini, Mozart, Bizet, Verdi, and Rossini, sung by a soprano, tenor, and absolutely fabulous baritone, with a quintet of piano and strings. It was worth the price of admission just to hear the baritone. He was fabulous. In the Venice Opera Hall: nothing much there – just some old building, down a few back streets from the Grand Canal, with some big old marble statues and a few Tiepolo frescoes on the walls. So typical of Italy. So many treasures wherever you go.

Venice is amazing. Magical. It’s hard to believe real people live in such a place. They should be made of fairy dust or something. Perhaps they are. And yet here they are, ordinary Venetians, going about living their lives, and so easy to spot because they are dressed so much better than the rest of us, an unmistakable elegance. Like Cinque Terre, it’s difficult to believe such a place exists. I barely have words for it, but spend all my time enraptured and in awe, looking around me and being constantly amazed and thrilled.

Day four – today we went Murano and Burano. Murano is famous for its glass of course, and historically was extremely important in the development of glass, especially in the development of perfectly clear glass, and mirrors. Today there are many stores filled with tourist tat, but again, in walking the back streets, we did find a couple of studios with some beautiful work by true glass artists.

Burano is one of the most astonishing and whimsical and heart-warming places I’ve ever been to. It made my heart sing with excitement. Again, who would have thought such a place would exist? A few hundred years ago the citizens of Burano decided they needed a way to clearly delineate property lines so came up with the idea that everyone should paint their house a different colour. The result can be seen below. Just astonishing. And wonderful!

At the end of the day we got off the vaporetto from Burano and walked for about an hour through the back streets of Venice, and then down the main shopping street, to our hotel. We bought hot paninis along the way to eat cosy at home on the bed in our warm room. Speaking of warm, it’s not. The warm weather has deserted us. Today we bought hat, scarf and gloves for Don and hat and gloves for me. It’s cold here now, though wonderfully still sunny.

Day five in Venice. We went to Rialto Market. It being Saturday morning it was crowded not only with tourists, but with all the locals doing their shopping as well. It’s mainly a fish/seafood and fruit/vegetable market. It must be so strange to be going about your normal life being surrounded by people photographing you.

Don and I are both completely charmed and enthralled by Venice. It really is a unique and enchanting place, and somehow hard to take it all in. 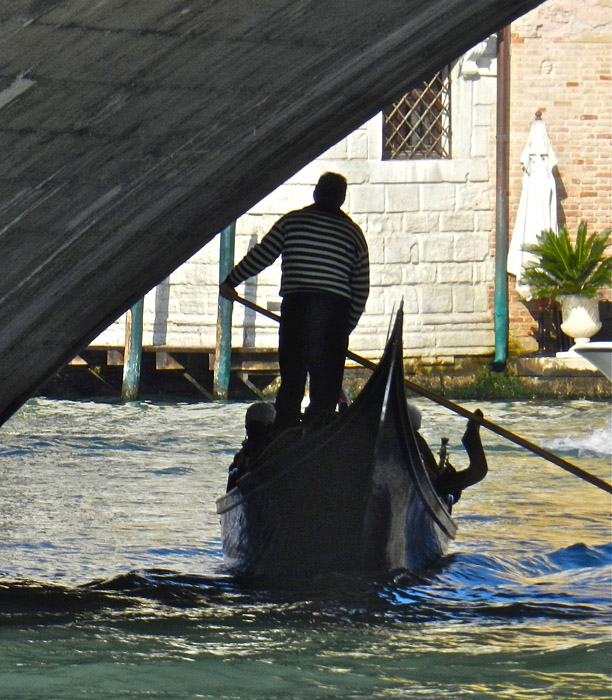 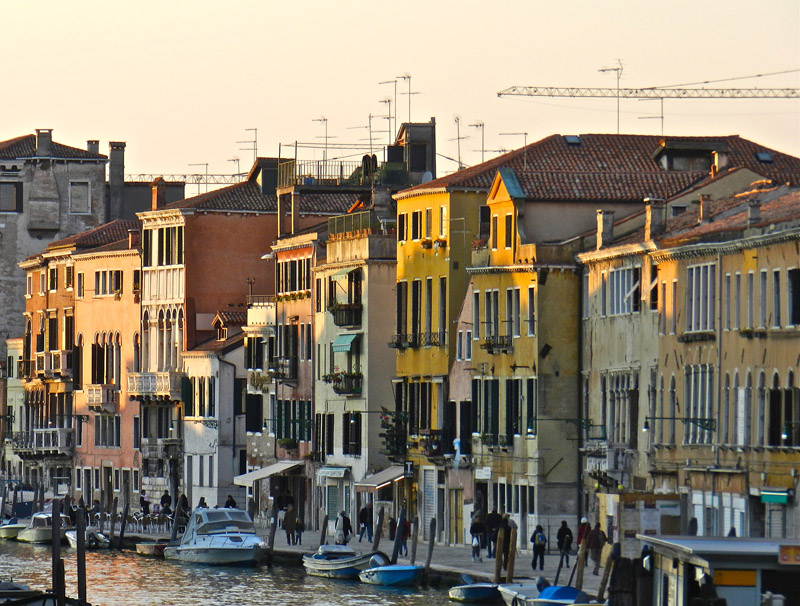 Day six we did laundry, had lunch, then went on a gondola ride in the labyrinth of small canals away from the Grand Canal, and got to see the real Venice from the water. Utterly magical. Can’t think of any other word to describe it. The gondolier told us how Venice was built on sandy islands, and the foundations are wood, and presumably hundreds of years old, and then marble on top. He says it is sinking at the rate of one cm per year. He said the real Venice was in the small canals away from the main tourist sights of St Mark’s and the Rialto Bridge, and that is what we wanted to see. The gondola glided along in silence. It is so silent. There are no cars, and on the smaller canals no motor boats, just silence. He described it as a museum city and he is right. The whole of Venice is a museum and if you get into the labyrinth of small canals and narrow streets you can see it. 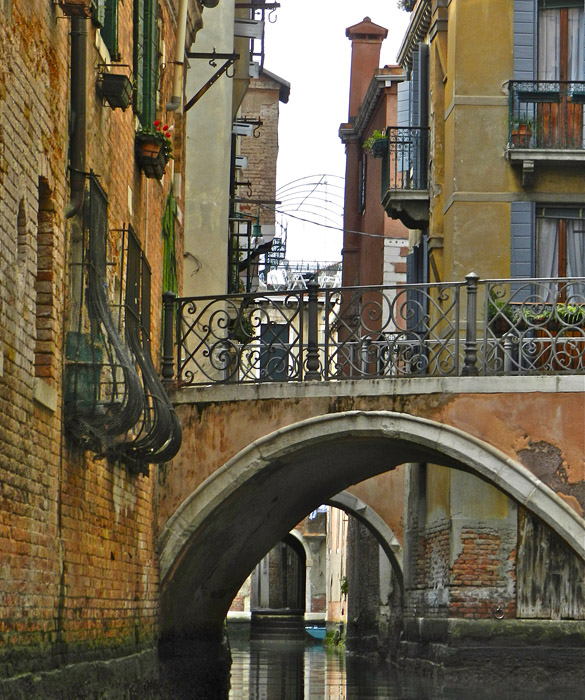 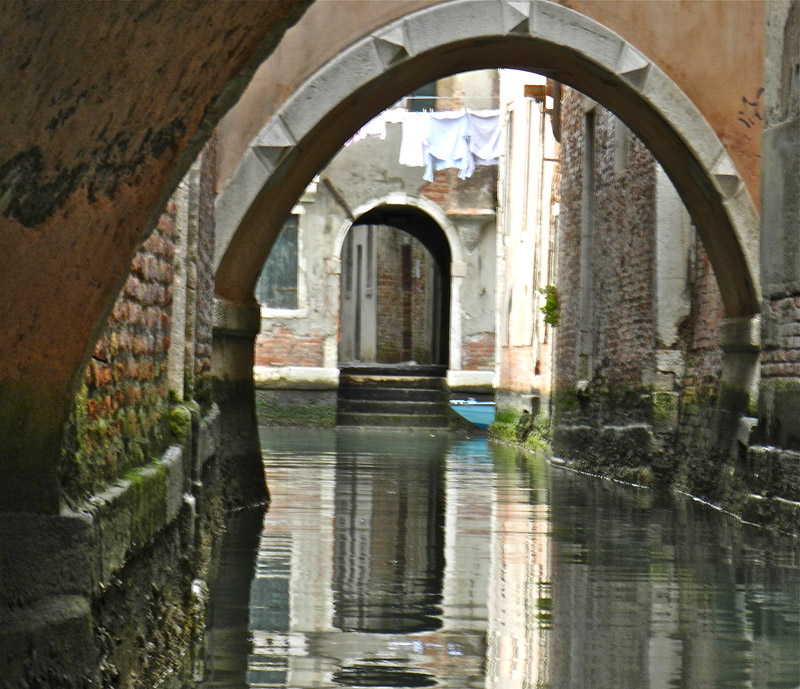 After our gondola ride we went to St Mark’s Basilica, as we hadn’t been inside yet. The entire complex ceiling of five domes, many arches, and many deep window niches is entirely covered in multi-coloured mosaic of tiny tiles. It was mostly gold, and depicts various Christian scenes. I can’t even imagine how long it took to create such a thing. Exquisitely beautiful. 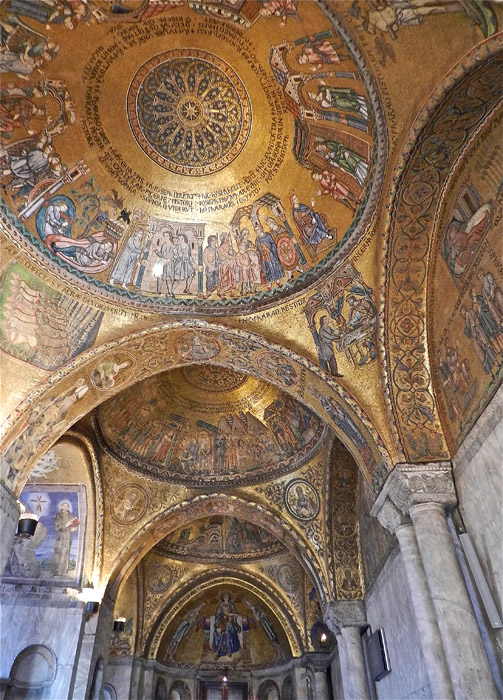 And one last picture from Venice to end this post. 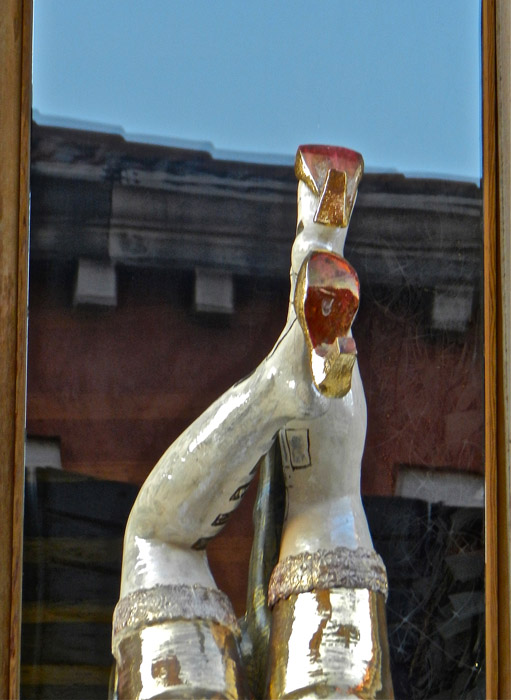