27-28 May 2018.
This is the day! This is the day I’ve been working towards for six months. Eight months ago, almost to the day, in September 2017 I had a total hip replacement. Somewhat ambitiously, barely two months later, I committed to a three-week tour of China with Intrepid Travel beginning 19 May 2018, preceded by three weeks of solo travel in Japan. At that point I could barely walk, and was still using a walking stick. I had about five months of rehab and fitness training to prepare for the trip. I had no idea if that was enough time or not. At the very least I had to be fit enough to do a three-hour hike into the forest up the side of Emei Mountain. Intrepid’s trip notes: Expect plenty of steps and steep paths, and dress accordingly. Sturdy footwear will help you to enjoy this challenging but rewarding day on the mountain.

Today is the day. We’ve spent the morning climbing by bus then cable car then a lot of stairs to the summit of the mountain. Retracing our steps to the bus parking lot, we have lunch, and then travel by bus to the starting point of the hike. I’m about to find out if I can do it or not, and I pretty much have to be able to.

Right from the start the scenery is captivating, the lush green of the thick forest giving way to mysterious valleys under cloudy skies. 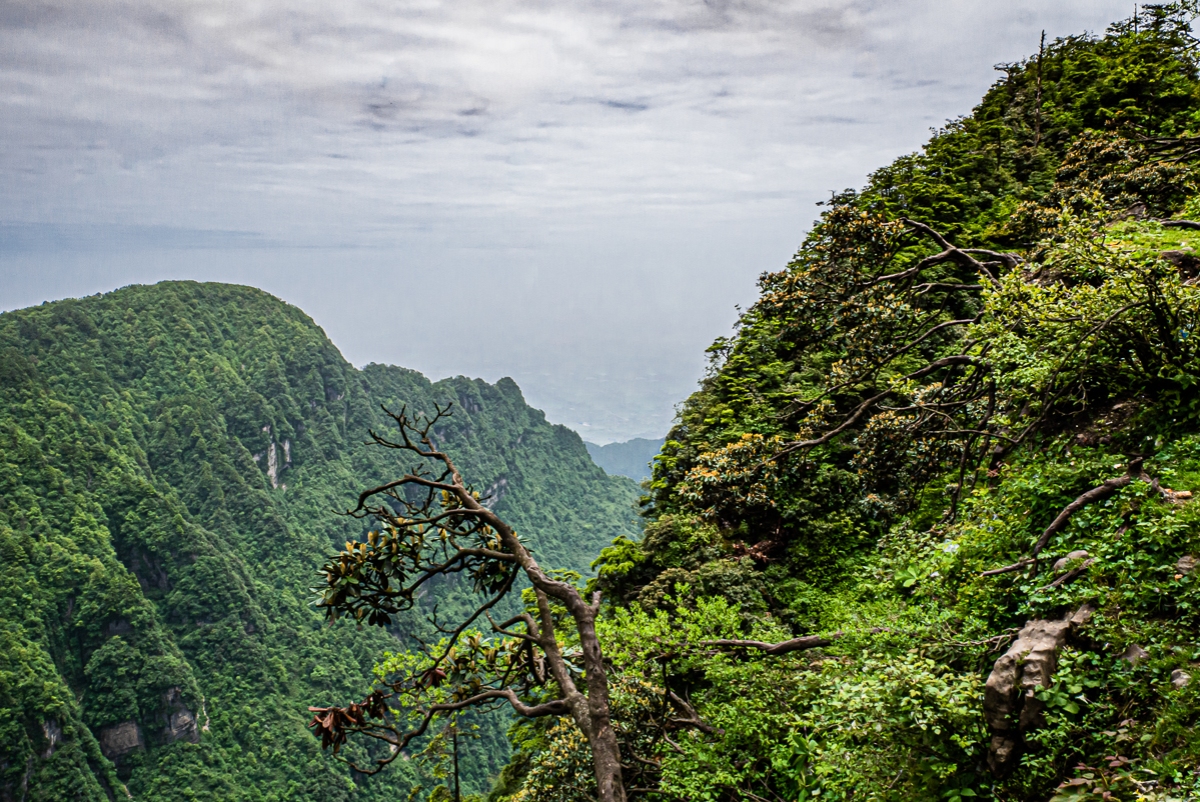 I walk confidently with my hiking poles, feeling no pain, only joy and excitement.

We are not hiking in true wilderness. Emei Shan, one of four sacred Buddhist mountains in China, has been a place of retreat and refuge for centuries and is still an important place of pilgrimage for China’s Buddhists, and a popular tourist destination. As a result there are thirty or more monasteries and temples scattered over the mountainside, and the trails are paved. But the surrounding forest is as it has always been, lush and verdant, home to over 5000 plant species and 2300 species of wildlife.

Initially the path is flat and the walking easy. There’s a monkey! So sweet sitting there on the fence eating watermelon.

As well as Peter, our tour guide, we have Nathan with us. Peter refers to him as the Monkey Police. Later we find out why, but for now we coo over the cute monkey and walk on by.

We pass by a million prayer ribbons tied to a fence, 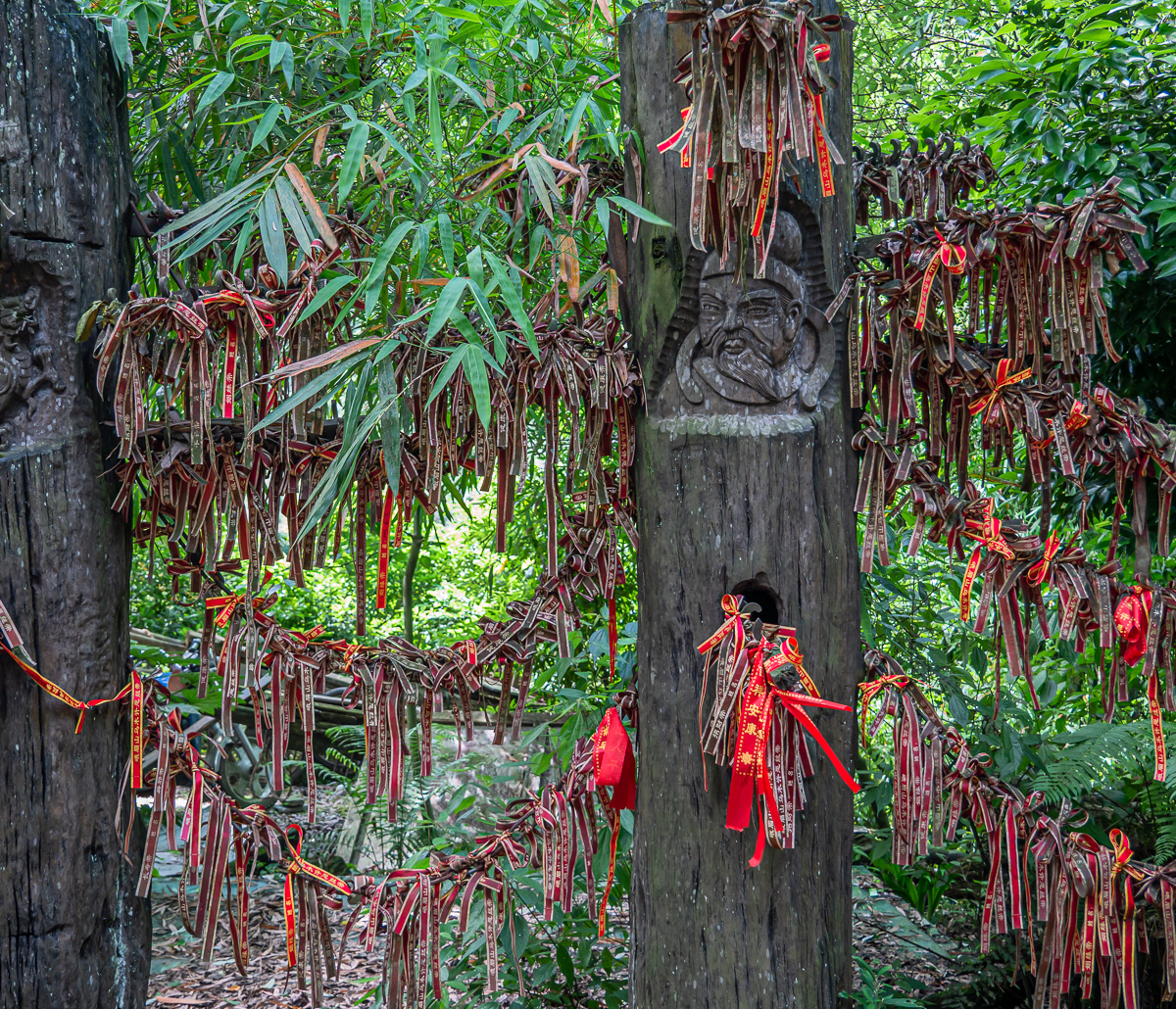 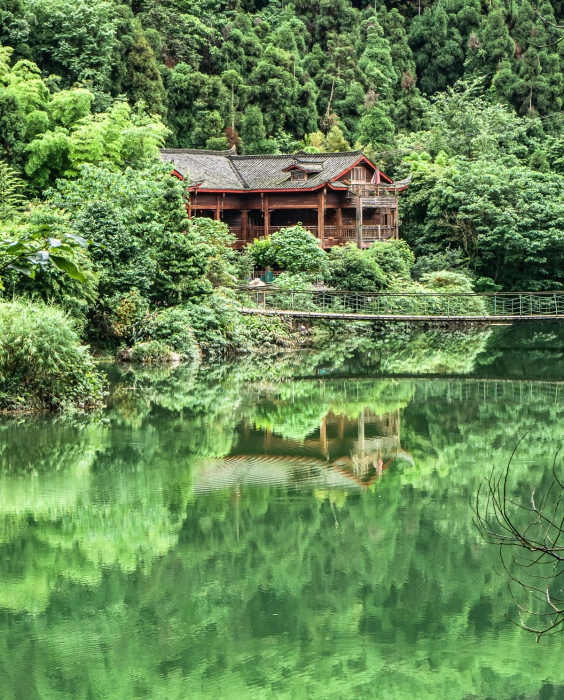 a series of stalls selling tourist trinkets and Buddhist paraphernalia,

and some visiting monks. 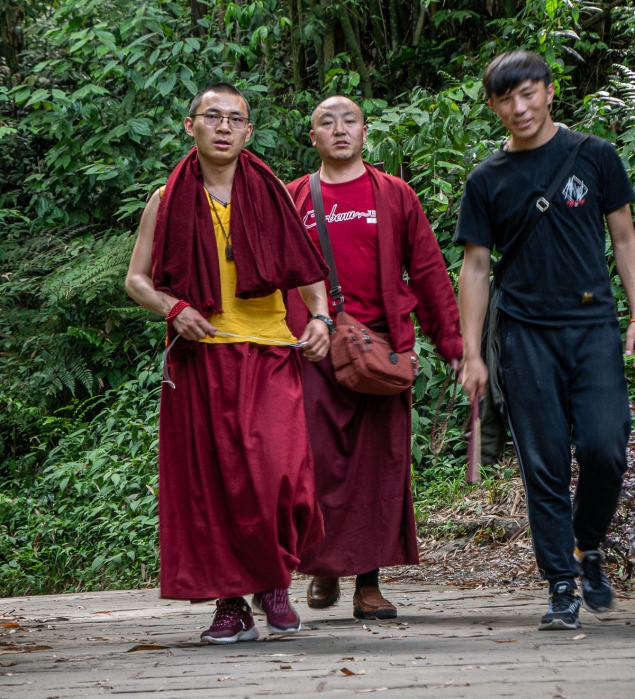 Now the trail gets more interesting. It runs alongside a lazy turquoise river and over a stone bridge. Pagodas appear, and more curved stone bridges over streams at the bottom of crevasses in the land, and I feel as if I’ve fallen back in time, into some place in a dream of old China. 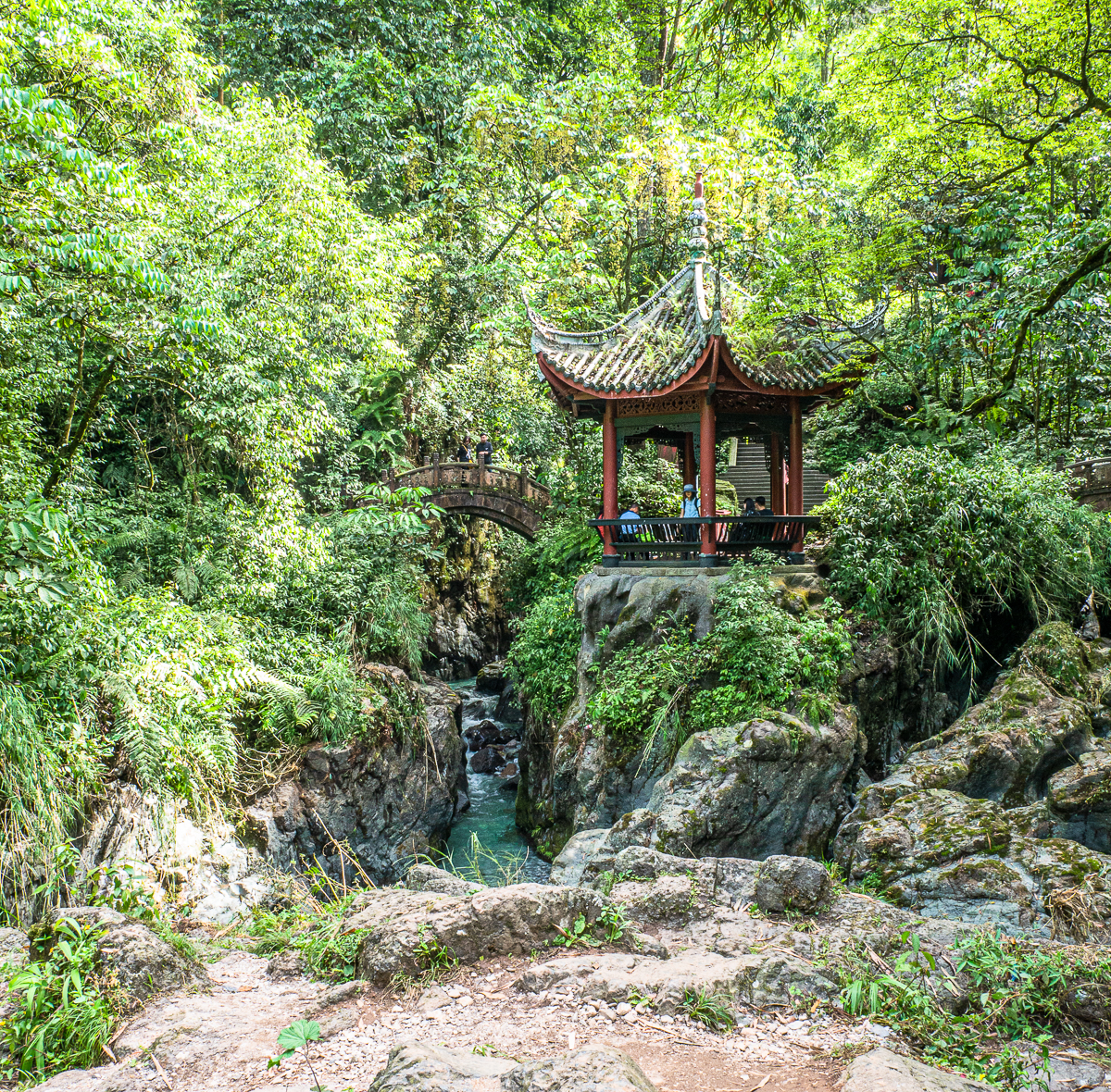 And then we come to a small monastery, bedecked with prayer ribbons all up and down the approaching stairs, each one a symbol of hope and yearning. There are hundreds of them just at this one small monastery and temple.

The inside is typical Chinese Buddhist styling. On the altar there’s a fat happy Buddha surrounded by flowers. The rest is all cherry wood and golden bodhisattvas and gorgeous embroidered yellow drapes. After a quick look inside we continue on our journey.

Soon we pass a waterfall cascading down the mountainside

and then come unexpectedly to a massive carving in the cliff-face.

There’s a descriptive panel and although it is in English as well as Chinese much is lost in translation. As best as I can decipher from the plaque it is the story of a visit by Emperor Taizong, the second emperor of the Tang Dynasty (618-907) who was worried about his hold on his kingdom due to power struggles with his older brother. Even beautiful Emei Shan could not allay his worries and he wrote a sad poem about it. The photos show only a small portion of this epic rendition of his visit. There are dragons and giant dogs and many subjects paying obeisance to their sad leader. 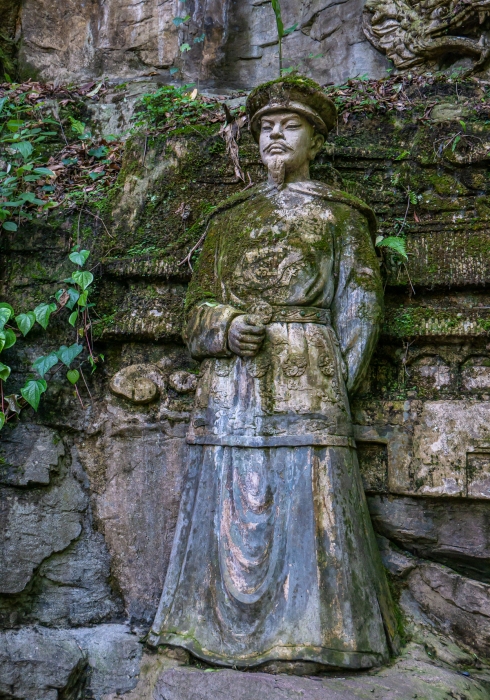 We continue on our way passing food stalls for hungry hikers,

working our way on dim narrow pathways alongside more streams, 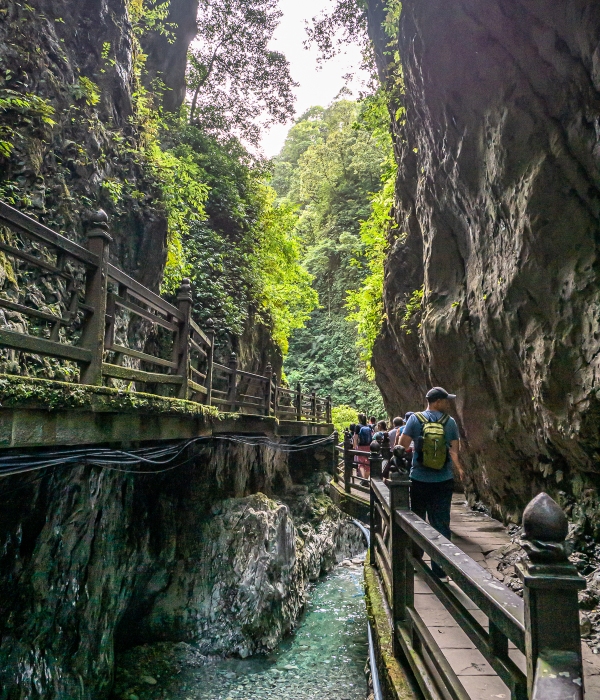 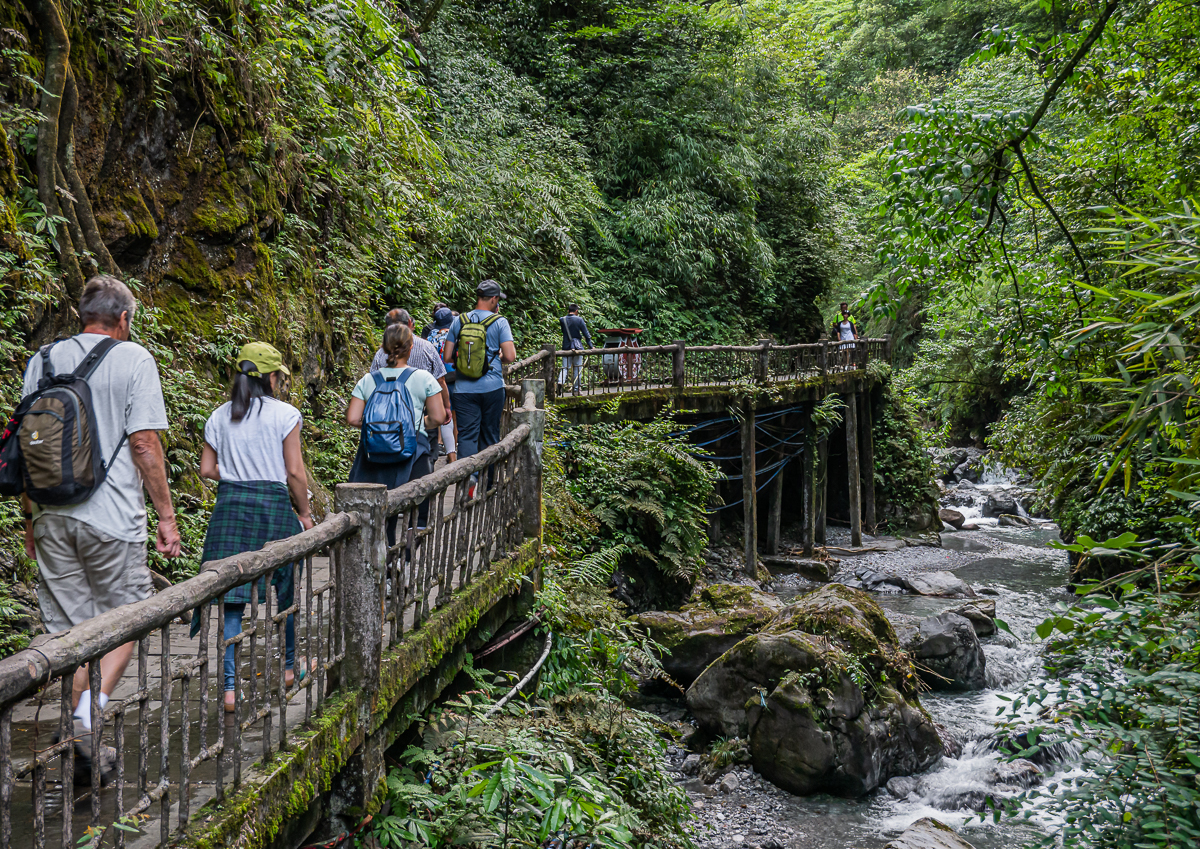 and hop-scotching across a river. 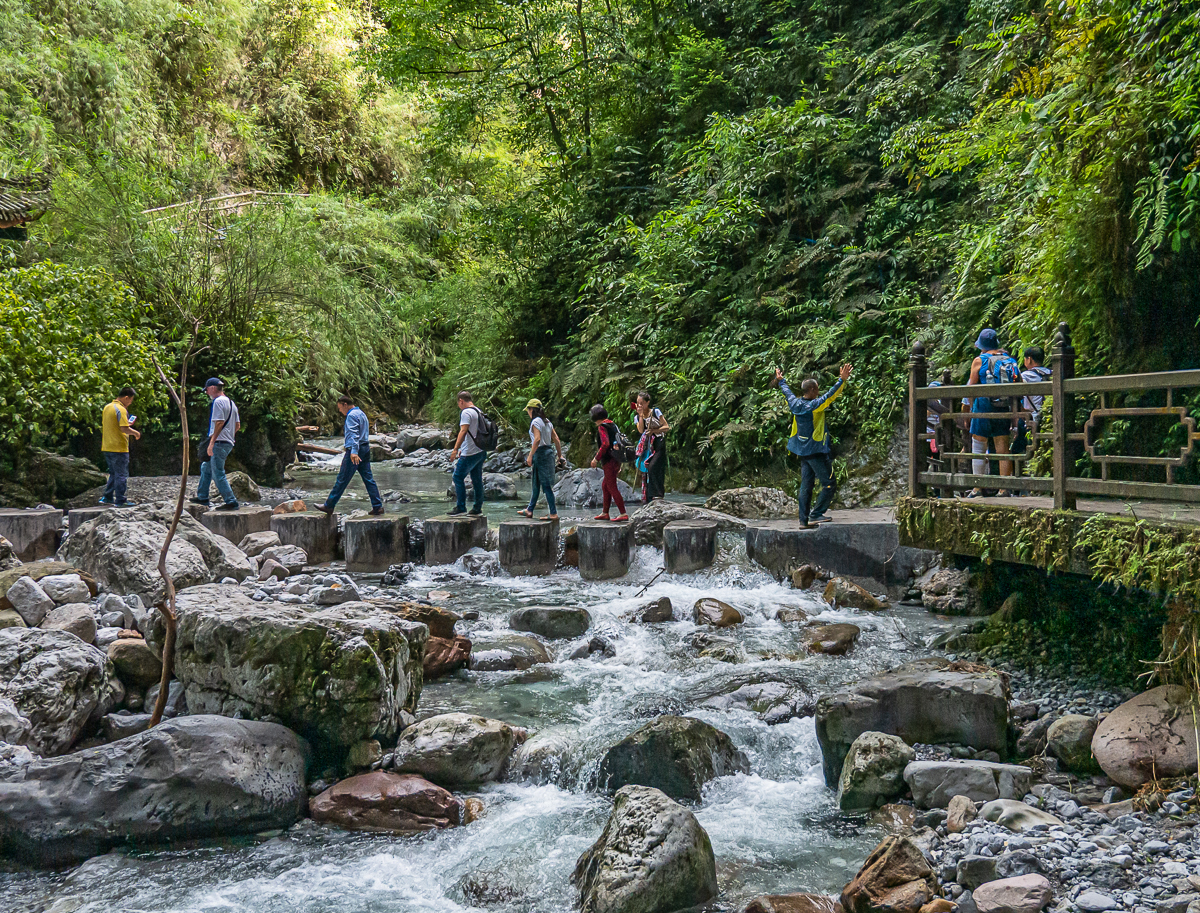 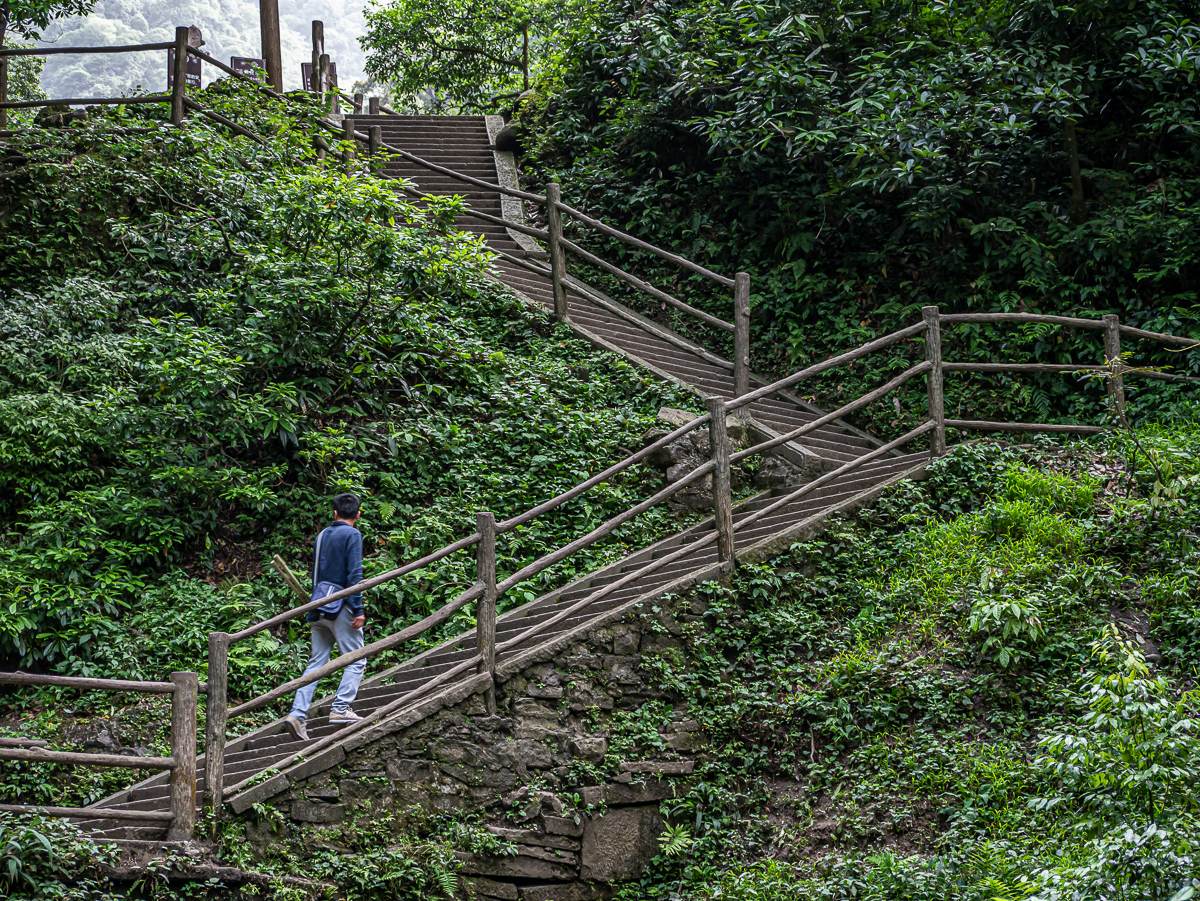 We see men carrying heavy loads up the mountainside; a sobering reminder that everything used in the monasteries is carried up by hand.

We are seldom completely alone, but it is never very busy, and always all around us is the luxuriant forest. The earth speaks to us in vivid leafy green.

We pass another waterfall, and work our way slowly up along the side of another crevasse. At the top of each little rise the views are our reward.

We are almost there. All that is left are 1200 more stairs. Up of course.

I’m so happy that there are two other women in the group in much the same age range as me. I don’t have to struggle to not be last. I don’t have to worry about having people wait for me. Or probably worst of all, people being kind and saying it’s ok if I’m hours slower than everyone else. I have my compatriots and we stick together. We make our way up at our own pace. The others have moved off ahead but it doesn’t matter. We don’t have to win the race. We just have to get there. And we do, about ten minutes or so after the others.

I ask Peter how long his quickest group took to hike into the monastery – 2 hours 50 minutes. And the slowest? Five hours. We get in at 3.5 hours. I did it! And without pain. After a couple of years of arthritis pain, and then the surgery there were times I wondered if I’d ever hike again. And even though I’ve been walking anywhere from 7 to 15 kilometres almost every day for the past four weeks this still feels like a huge win.

We enter the paved courtyard of Hongchunping Temple.

The buildings, all weathered wood and grey slate tiles, have a timeless sense of belonging, as if the mountain has embraced them. It is a serene space with the patina of age highlighted by freshly painted decorative details. 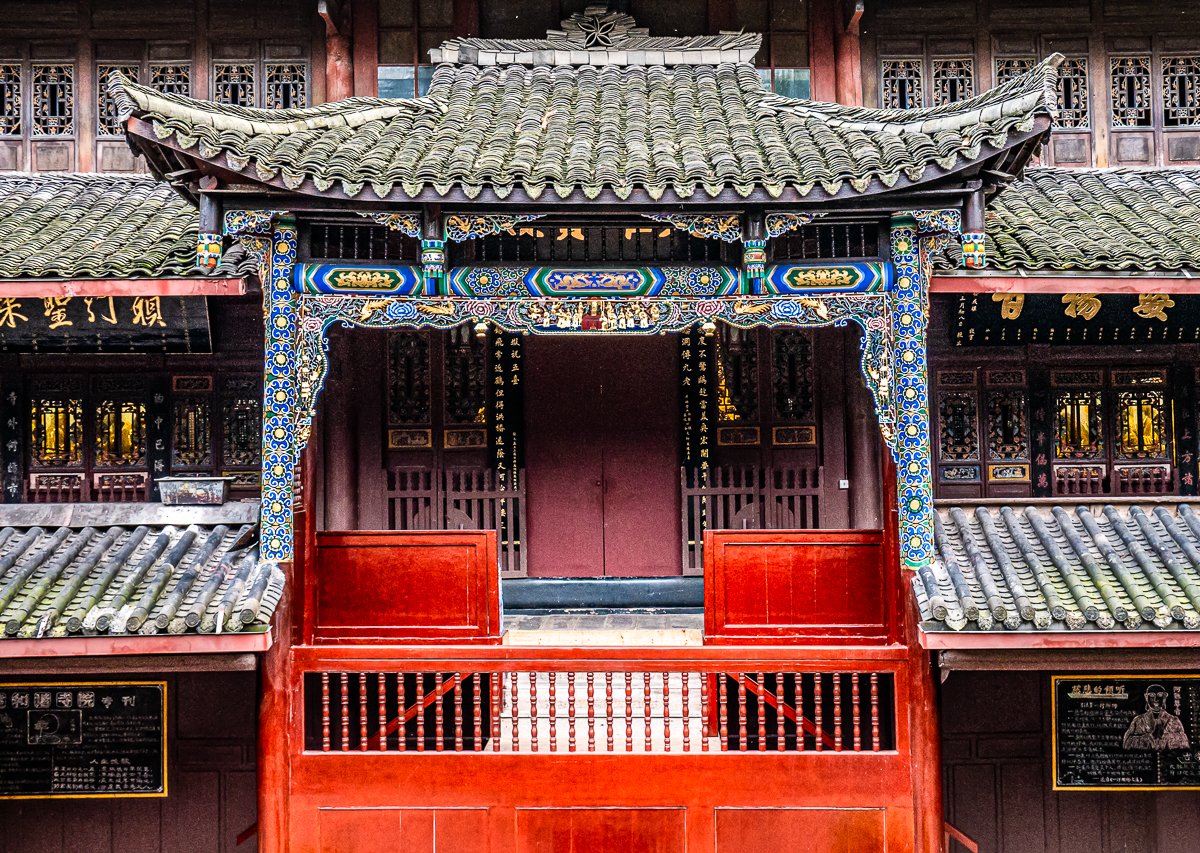 We’re shown to our rooms and get settled in. My room is sparse, simple, functional: two beds, a dresser, a chair, a clothes rack. All are made from ageless softly greying wood. The four-poster beds are hung with unbleached muslin privacy curtains.

I unpack a little and go exploring. There are some tall concertina doors, and, ever curious, I peer in through the cracks. It is the meditation hall. I can see slivers of the golden Buddha and some of the altar and bodhisattvas. I want to go in but it is locked.

I continue on to the ablutions area. There is a long concrete sink with many taps lined along it for washing. Adjacent to it is the women’s toilet. It’s like nothing I’ve ever seen before. It’s a huge concrete semi-circle of cubicles, about ten or fifteen of them. Each cubicle is defined by waist-height concrete walls, and each is a squat toilet with a long tapered opening. The entire place is spotlessly clean with no odour. Simple. Basic. Functional. Honestly I’m a bit askance at first, until one of the others actually has to point out to me that they are odourless and clean. Although I hate to have to admit it, my biggest issue is how to get up again.

I’ve been in some pretty, um, shitty squat toilets in my time, but the best I remember were in Japan. In true Japanese fashion there is an illustration explaining how to use it. No you don’t put your butt over the widest part. You turn around and face the back wall of the stall and right there in front of you are two handy dandy bars to pull yourself up with. Now there’s a squat toilet I can get behind . . .

Continued exploration tells me that this was once a busy place, housing perhaps up to as many as 100 monks. Today there are ten or twelve monks living there, and from time to time small tour groups like us. I only ever, briefly, see one monk. It’s as if they are ghosts. 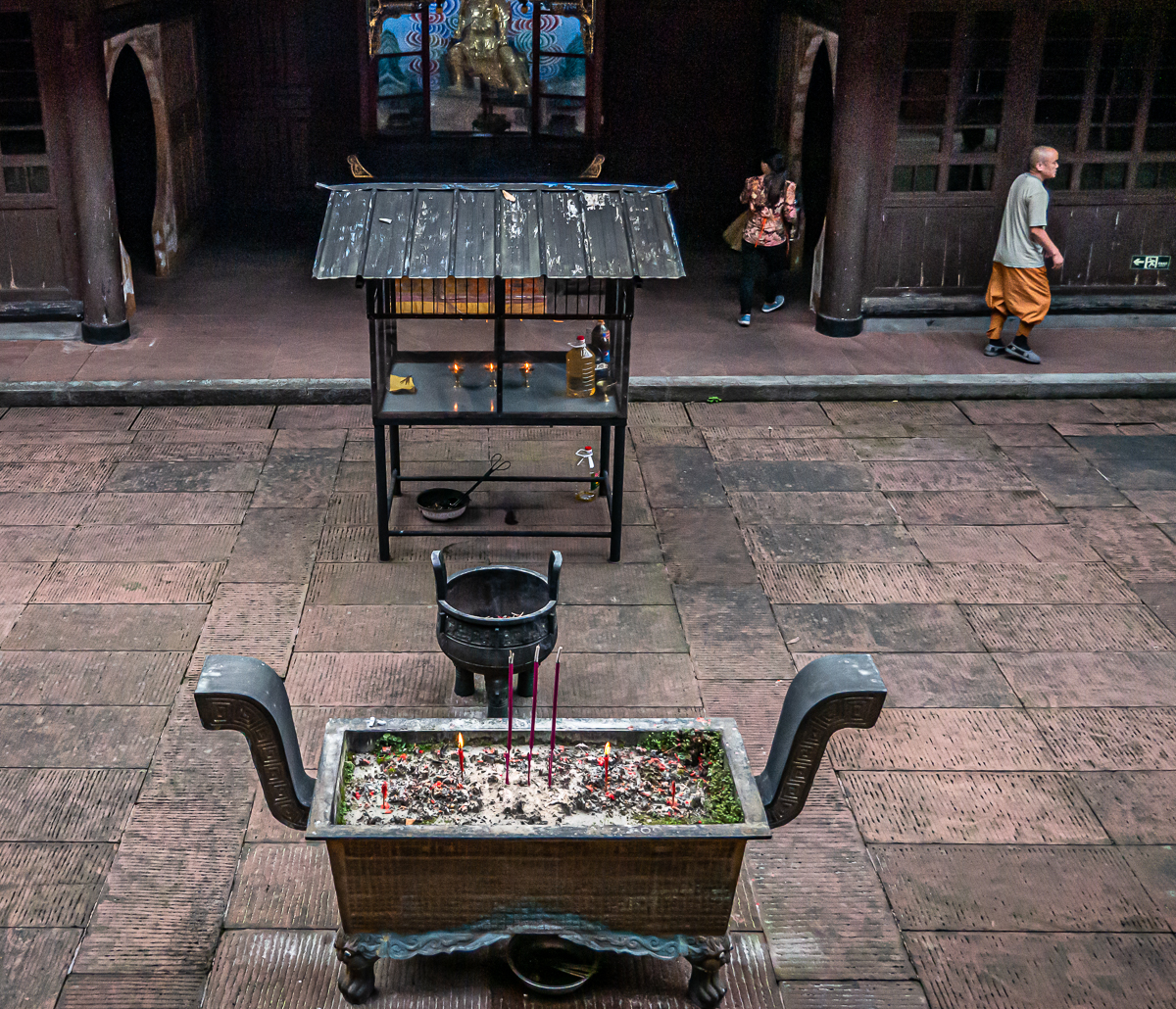 After settling in we head down 250 of that final flight of 1200 stairs for dinner at a café hanging off the edge of the cliff.

Early next morning I hear the monks chanting. I’m too lazy to get up so early, but when I do go down I’m thrilled to discover the doors to the meditation hall are open. Oh what sweet joy. What beauty! The highly polished floors reflect the huge golden Buddha,

the offering of apples, 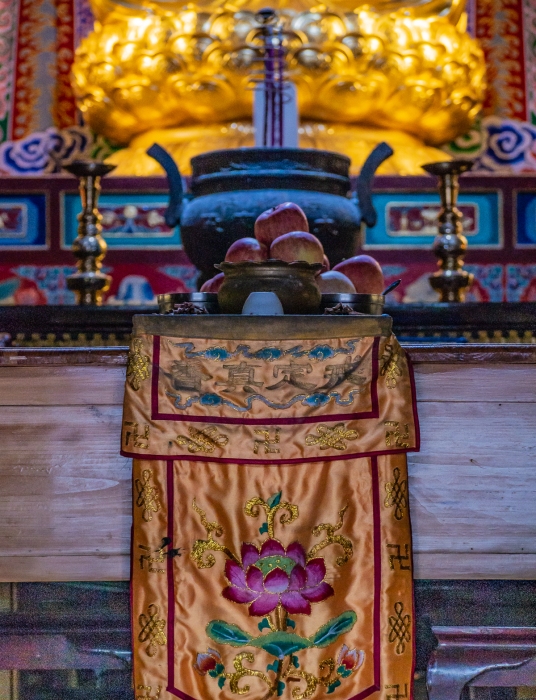 and the ten golden Bodhisattvas, sentinels down either side of the room. Aligned in perfect straight rows like little soldiers are the meditation cushions.

After breakfast at the café we set off on the return journey. On the way up we’d spied monkeys from time to time though they were half hidden by the trees. They are Tibetan Macaques and the forest is full of them. We were hoping to see more of them. Well we get our wish. I’m a little behind the others, walking with Peter when we see one up in a tree. I stop to photograph it of course, and then keep moving to catch up with the others.

Now the situation is different. One monkey. Then two. Then three, four, five, all coming towards us. They are lining up to see what they can get. Eventually there are about a dozen of them. The whole troop coming together gives them courage. Peter shouts at us: Stay together! Keep moving! Nathan bangs his big bamboo sticks together but it makes no difference. Then at Peter’s urging Nathan finally sets off two firecrackers and hurls them at the monkeys. Bang! Bang! And they scatter. But not all of them. A couple of the more determined ones run along the top of the fence beside us. By this time we are in a kind of tunnel that is open on one side. There’s nowhere for us to go but forward or back. No way out but to keep moving.

He looks cute, but he’s really watching to see if any of us might have some food. Unfortunately the macaques of Emei Shan have become habituated to people feeding them so they have become quite aggressive and are always on the alert for an easy meal.

We keep walking. The moment passes. We breathe again and continue on.

Along the way we pass a group of a dozen or more novices making their way to one of the monasteries. They are to spend time there to see what it’s like, to find out if becoming a monk would suit them or not.

Eventually we make our way to Baoguo Temple at the base of the mountain, and our second night in a Chinese Buddhist monastery.Next post: Baoguo Monastery and my accidental incursion into a private ceremony. And the impressively gigantic Leshan Buddha.* Sir Edmund Hillary
All words and images by Alison Louise Armstrong unless otherwise noted
© Alison Louise Armstrong and Adventures in Wonderland – a pilgrimage of the heart, 2010-2019.

58 thoughts on “It’s Not The Mountain We Conquer But Ourselves.* China’s Emei Shan”