23-25 May 2018.
When I was preparing to go to China I was astonished to discover that there is a Muslim population there. I was both surprised and puzzled. It seemed so strange, so incongruous. Chinese Muslims? How did that happen?

A few thousand years ago, somewhere in China, a cocoon fell from a tree into a hot cup of tea. You wouldn’t think anything of it really, but it is truly mind-boggling the events and global changes that arose from that simple innocuous occurrence.

Legend has it that the person holding the cup of tea was an empress, and that she had an interest in weaving. Yeah. Right. The cup of tea could have belonged to one of her servants, or to any one of thousands of weavers in the land, but it always seems to be the nobility that gets the kudos. Maybe it really was the empress but I’m sceptical.

Anyway it was important that the person drinking the tea was a weaver because whoever it was noticed that the hot liquid melted the hard outer covering of the cocoon revealing a filament. Filaments meant something that could possibly be woven into cloth, and it turned out that this was the case. Thus silk, that most glorious of fabrics was both discovered and invented. After a time silk production became the work of women throughout China.

Each cocoon is made up of a filament between 600 and 900 metres long. Up to eight filaments are twisted together to form one thread.

It really had to have been some freak accident like this. Otherwise how could it possibly have happened? Oh sure – someone looked at the cocoons in a mulberry tree and thought – I know, I’ll just drop a bunch of those babies in hot water and I’ll have a whole new kind of thread to weave into beautiful soft shiny fabric. Not likely.

Recent archaeological finds indicate that silk and sericulture has existed for over seven thousand years!

For millennia silk was unknown outside of China. And when it became known, a couple of thousand years ago, through Chinese emissaries venturing west, everyone wanted it. It became a precious commodity highly sought after, so precious it was once a substitute for currency.

The manufacture of silk was the most closely guarded secret of all time, and the penalty for revealing the secret, or exporting cocoons, was punishable by death. Thus for well over one thousand years all silk came from China. And thus was born the Silk Road.

In reality there were many silk roads, as trade routes from east to west, both on land and by sea, opened up over the centuries. They originated in China, specifically in Xi’an, passing through the Russian steppes, Central Asia, the Indian sub-continent, the Iranian and Anatolian plateaus, and the Arabian Peninsula, finally arriving in Turkey. The trade routes then continued on to Italy by sea, and from there to the rest of Europe.

The socio-cultural importance of these trade routes cannot be overstated. It began with the desire of the western nobility for silk, and expanded into trade of all kinds of goods and services. Commerce was the driving force, but the trade routes also opened up a flow of information, ideas, and knowledge. Over a period of two thousand years it enabled interactions between different peoples and cultures. Religious ideas and beliefs, and scientific knowledge, was disseminated in both directions. Along these ancient routes missionaries, scientists, merchants, government emissaries, traders, and pilgrims travelled and connected and shared ideas about life and ways of being in the world.

Today’s multi-cultural societies arose out of these ancient trade routes. And all because a cocoon fell into a hot cup of tea.

The Muslim people of China are a result of the Silk Road, and many are direct descendants of Silk Road travellers. It was the Persian traders who brought Islam to China in the 7th century. These merchants came to, and congregated in, what is now Xi’an. Some settled there and gradually intermarried. The Chinese converted to Islam and the Persians assimilated Chinese culture. Eventually over the centuries they integrated so as to now be indiscernible. Today there is a population of 65,000 Muslims in Xi’an, and a total of about twenty million in China.

The following is a photo essay of the Xi’an Muslim Quarter:

Blue-grey flagstones underfoot, shade from the trees above, this is the main “fast food” street.

Tourists come here, but so do the locals. It’s always busy. 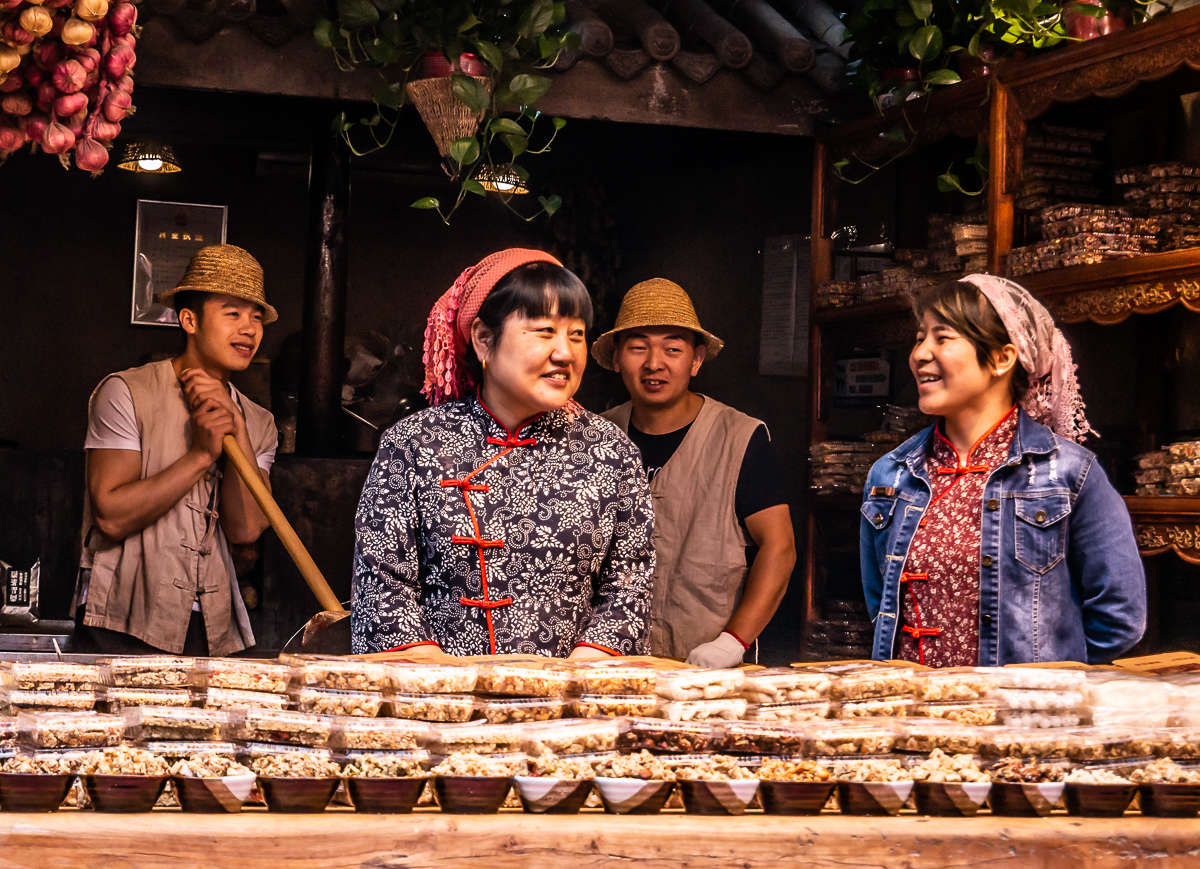 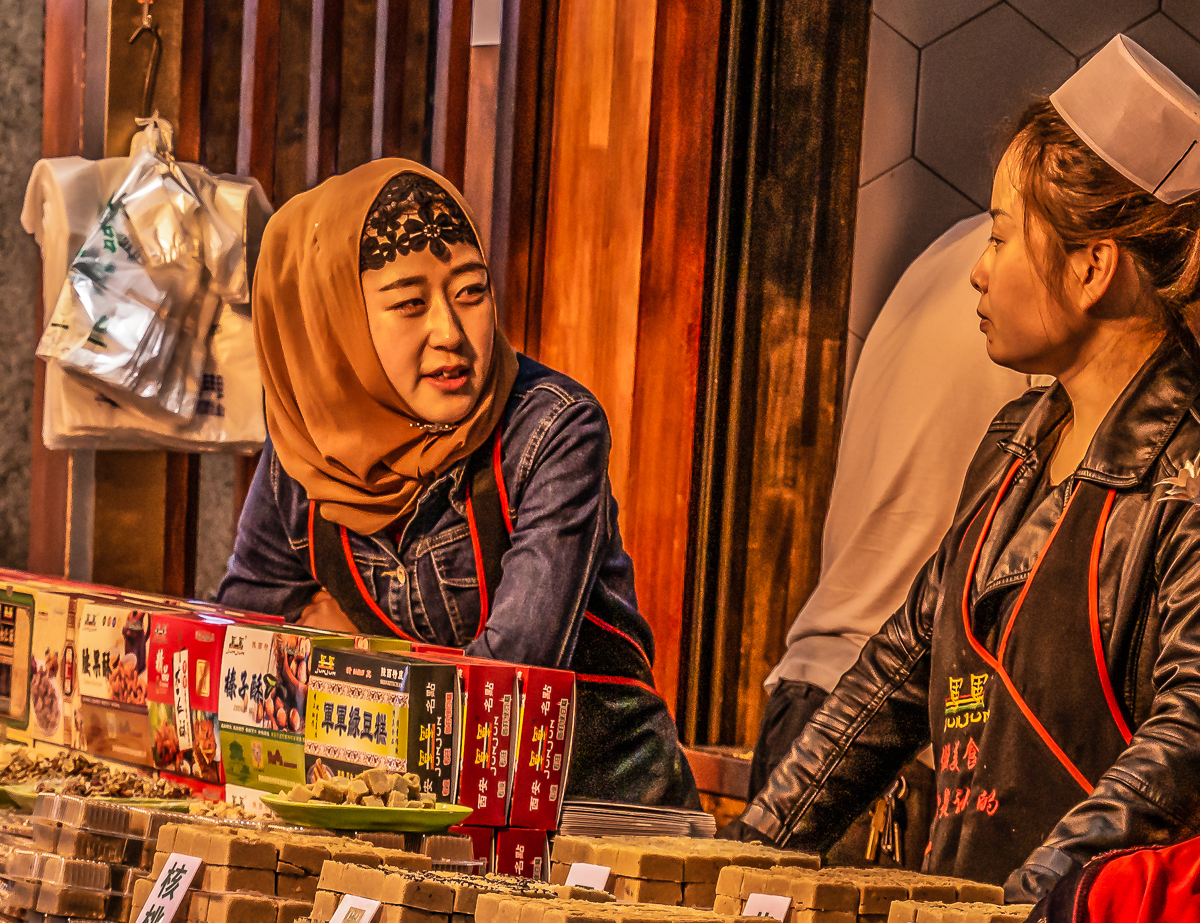 Pounding the dough for making flatbread with giant wooden mallets.

Pulling taffy (or fairy floss) to aerate it, which makes it lighter.

Beyond the snack street where almost all stalls and shops are devoted to food, much of it being a distinct cuisine of the Muslim people, there are many narrow roads and alleys. It’s the kind of place where you could easily get lost, and where you can buy almost anything. I wish I’d had more time to explore.

And then there is the mosque; unlike any I’ve ever seen. I was expecting something traditional, but the Great Mosque of Xi’an, the largest and oldest in China, is a marvellous example of the syncretism of Islam and the Chinese culture: the more than twenty buildings in five courtyards are in the style of traditional Chinese architecture. It was founded in 742CE with the majority of it built during the 1300’s. 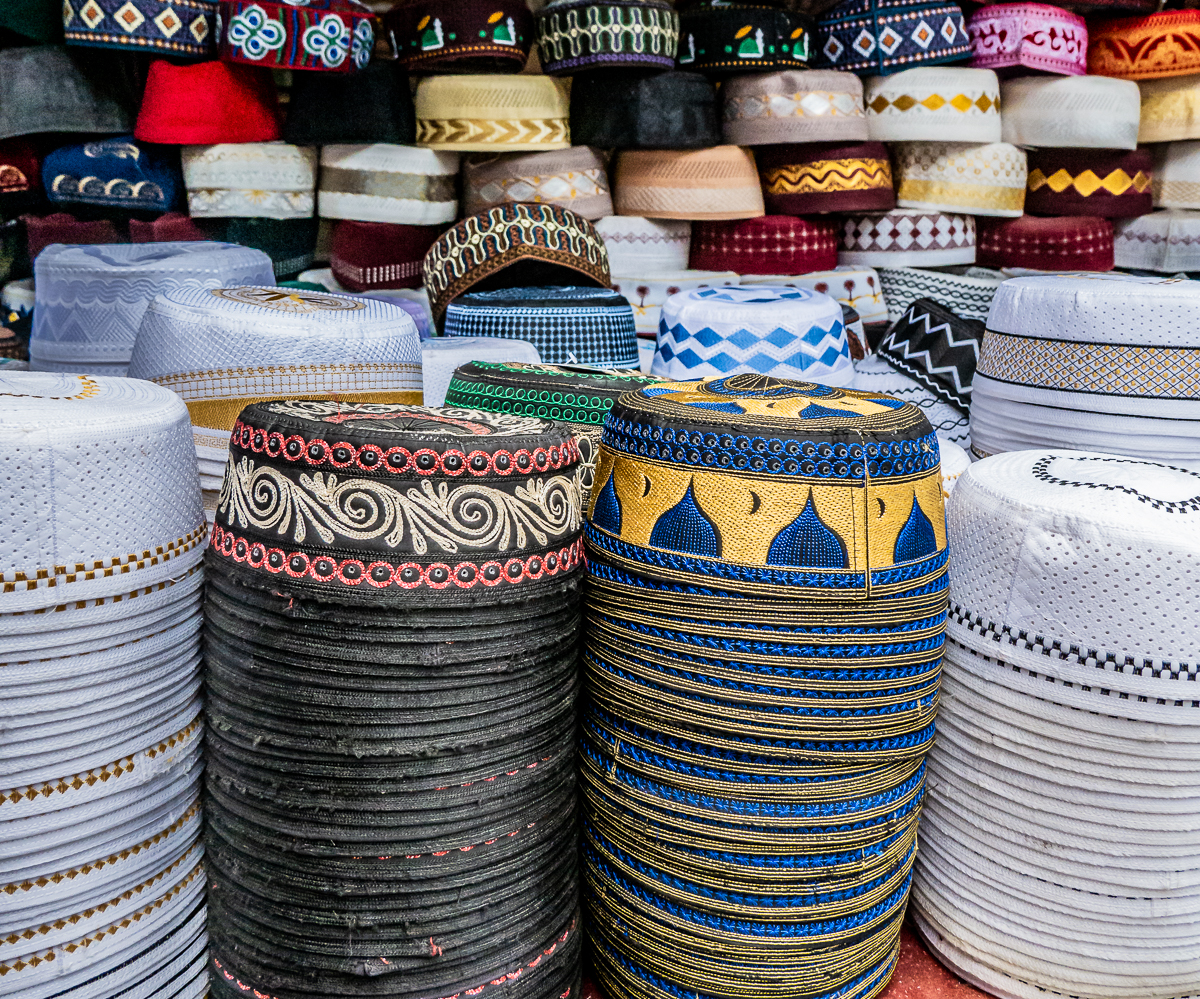 Taqiyahs for the men. 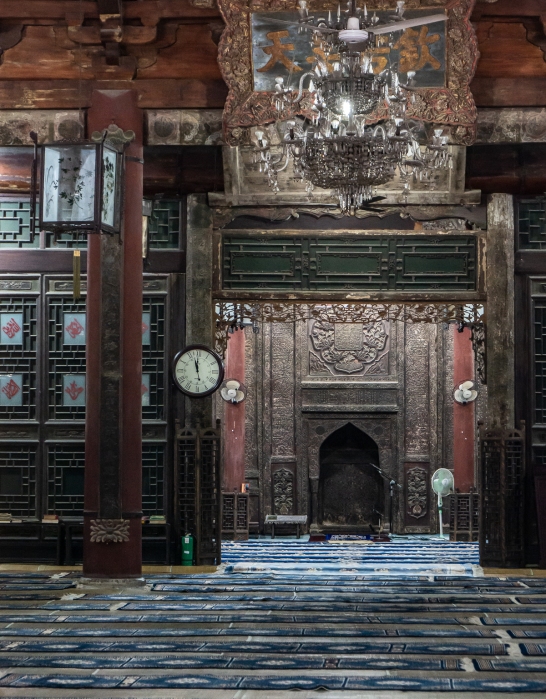