20 February 2017. Sitting on the wooden bench seats of the horse-drawn cart, as we trot along the red dirt track surrounded by tobacco fields, 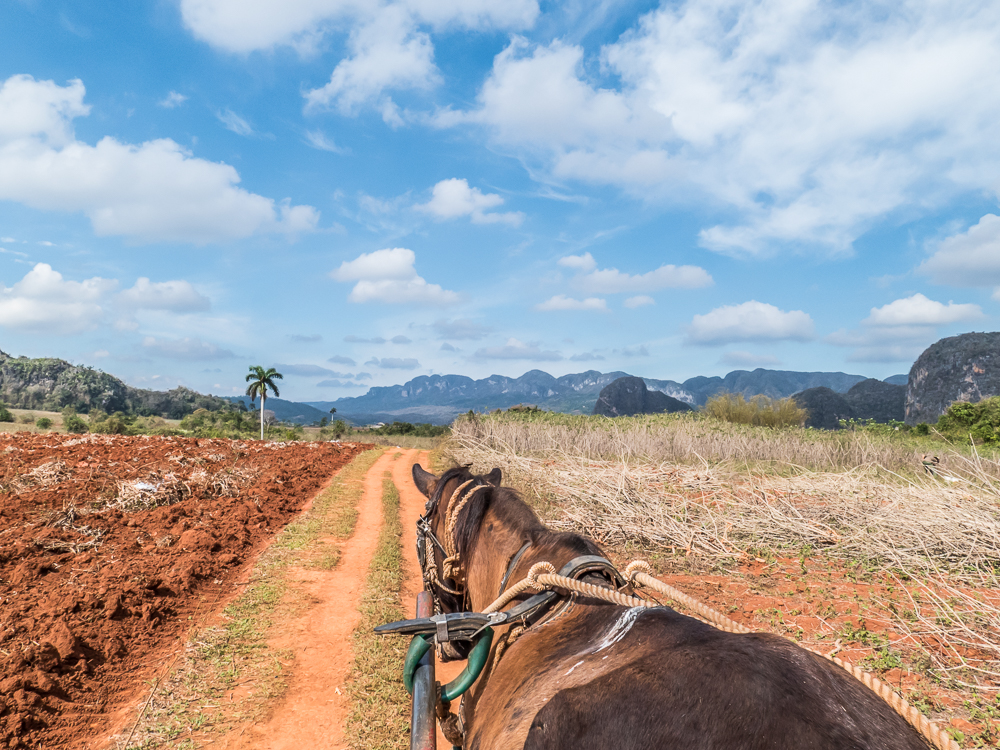 I say to Carlos in my halting Spanish Sabe palabra “exotic”? I now know that what I’ve said is “knows word exotic?” No wonder there’s a slight hesitation, and then he replies Si si exotique! I say to him Todo aqui para usted es normal, everything here for you is normal, as I wave my arms around the valley. Si si normal he says and I reply Para mi es exotique. For me it’s exotic. His face lights up. It’s as if a penny has dropped. We feel closer, have a friendlier connection, and understand each other a little better. It is such a wonderful thing to have a smattering of the local language. Perhaps it will make it easier for him when he drives other tourists around the valley, though he seems so easy-going that he probably just enjoys himself anyway. We’d asked for a farmer to take us around, but of course farmers are busy farming. Carlos and his brother own horses so they are hired to work on farms. And to drive tourists around the valley. Which probably pays much better.

It turns out to be one of our best days in Cuba; a really magical day that I’ll always remember.

The day before we’d stood in line in a tourist agency on the main street. We didn’t know if it would even be possible or not, but we wanted to get off the roads and tour the valley in one of the local horse-drawn carts. We didn’t want a tourist buggy. We wanted to go with a farmer in one of the unique carts they use in the region. I’ve not seen anything like them anywhere else. They have a rectangular metal “container” for your feet and whatever else is being hauled, with a wooden seat along either side of the top of the container so you’re forced to sit sideways. I wonder why they developed this way – this sitting sideways. Every other cart I’ve ever seen anywhere in the world is designed so the driver can face forward.

The day starts as a bit of a challenge. We wait with our vouchers out the front of the tourist office engulfed by the crowd of fellow tourists lined up to get to talk to someone inside, or waiting, like us, to be connected with their tour for the day. A man approaches and asks if we’re there for the horse and cart ride. He takes our vouchers and heads off down the street. After several blocks we start to wonder what’s going on and Don asks sharply Where are we going? It turns out there are no carts allowed on the main street. Eventually our guide takes us to our ride for the next three hours. 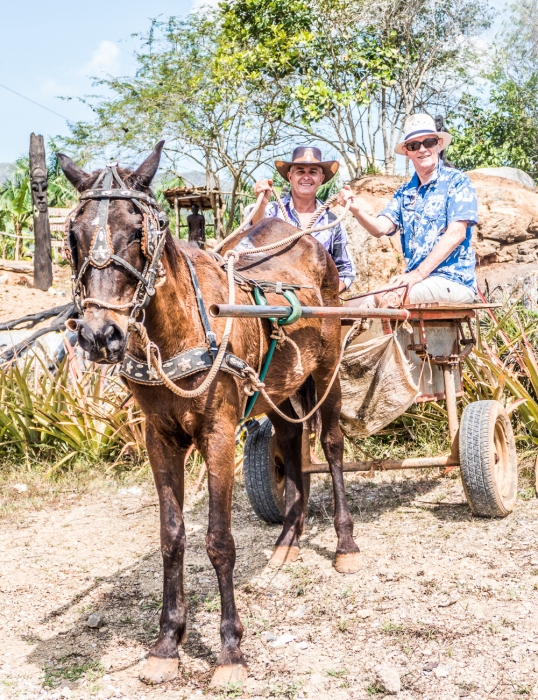 From Don: We clamber on board, and sit sidesaddle on the wooden plank seat, while the driver sits on the other side. We introduce ourselves with the usual Como se llama? and he tells us that his name is Carlos and his horse is called Toranado. Tornado. Okay. We smile at the name, hoping it’s not literal. Then we are off up the road out of town, and then off the road and onto a cart track past fields of yucca 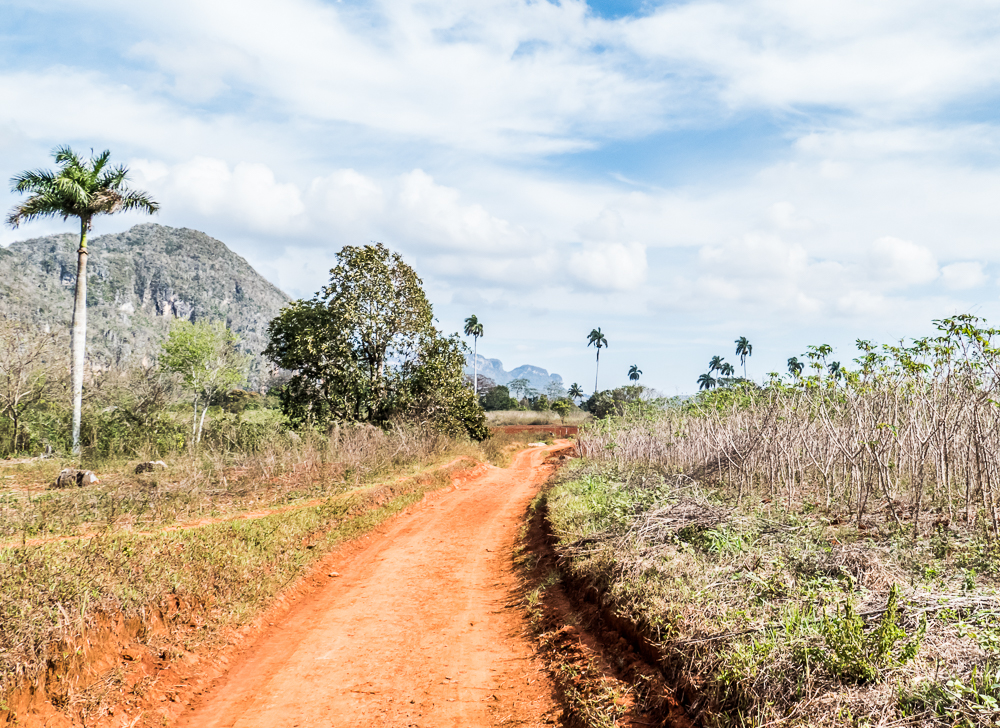 The scenery is spectacular, with large rock formations rising straight up out of the otherwise flat plain, and behind them more serious hills. We trot along, with Toranado doing a great job of pulling us up and down rutted cart tracks, with only the occasional complaint when he simply stops and refuses to move until a gentle smack across his back with the lead rope gets him going again.

The province of Pinar del Rio occupies the westernmost end of Cuba as it curves gently towards Mexico. Here is grown the very best tobacco in the world, in the Vuelta Abajo and Villa Cara regions, as well as in the Valle de Viñales. The cigars made from this tobacco are an iconic and world-renowned part of Cuban culture. The farmers of the Valle de Viñales, which we are exploring with Carlos, claim their tobacco is the best of all since it is grown within a national park so chemical fertilizers are forbidden. It is all organic, grown on small plots of land in the nutrient-rich red loam that covers this part of the country, and it is all farmed by hand. By law ninety percent of it is sold to the government.

The rugged mogotes or limestone bluffs, the red earth, the lush green of the plants,

and the plows pulled by a pair of oxen and steered by a vaguero all tell us we have arrived in the real Viñales, the Viñales of the local tobacco farmer. 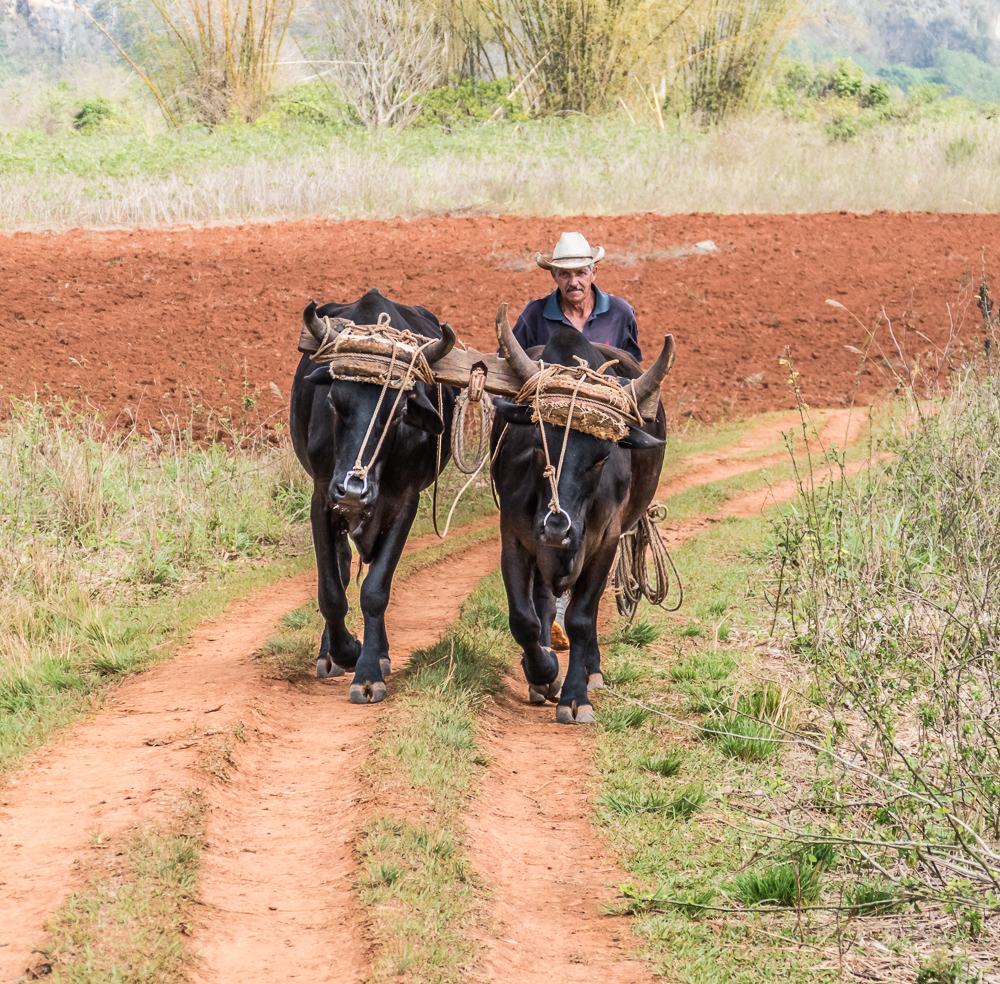 There are thatched sheds for drying the tobacco scattered throughout the region,

We stop at one of the farms where we are introduced to the farmer and one very territorial turkey. 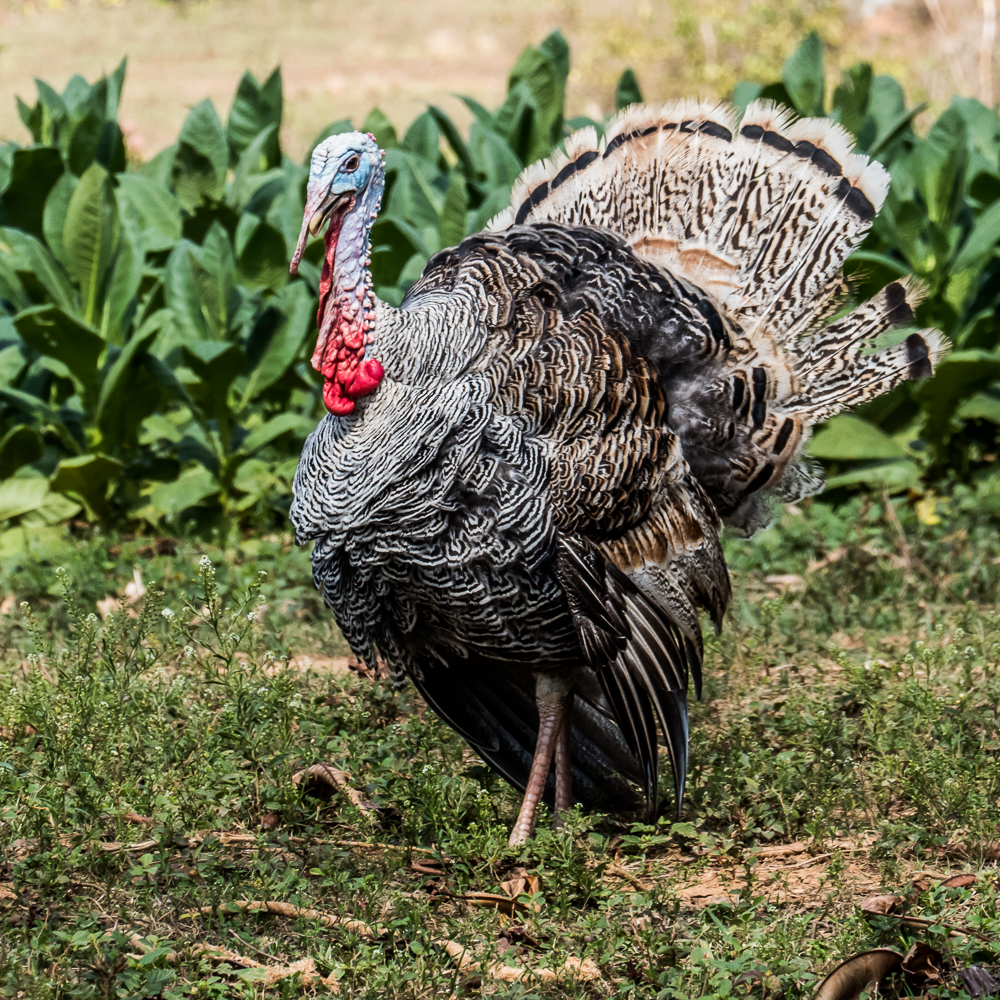 In the curing shed 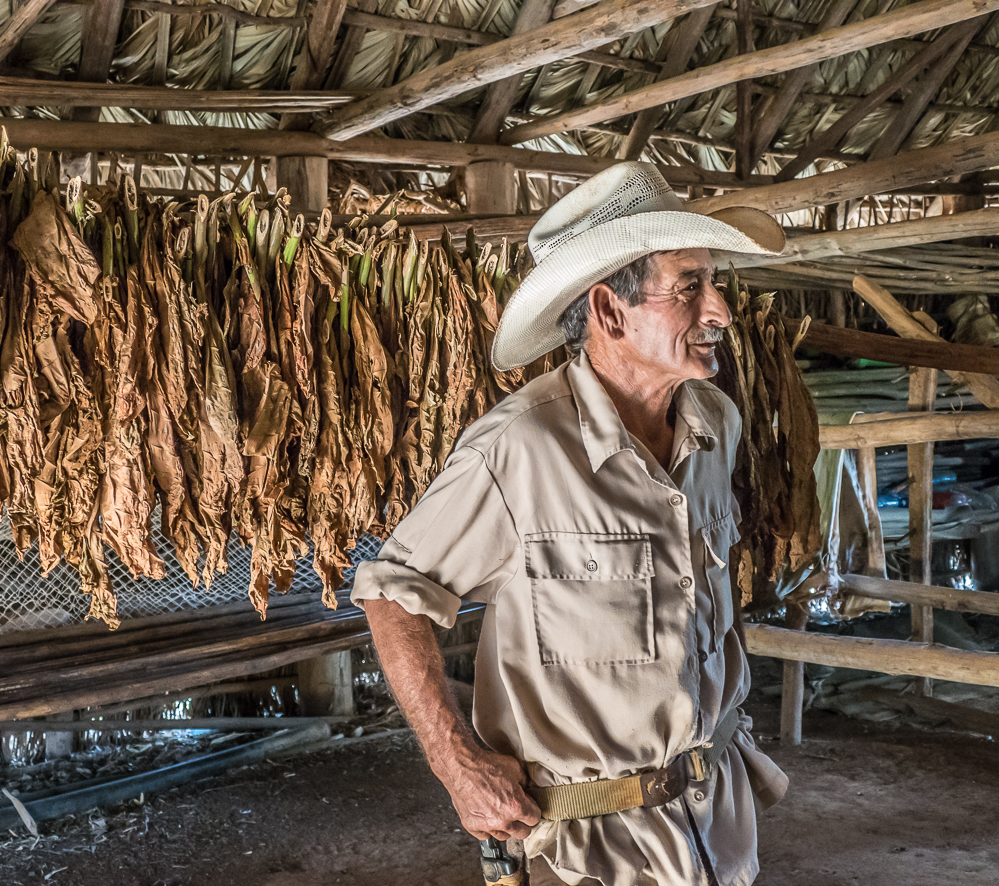 we are told about the tobacco growing, drying, and curing process, and shown some hand-rolled cigars. Leaves are hung to dry for about six or seven weeks. After that it gets ridiculously complex with wrapper, filler, and binder leaves all undergoing different lengthy fermentation processes. The leaves are then hand rolled in a factory by experts. We didn’t see a cigar factory in Cuba, but we did visit one in Myanmar where cigars are equally popular. With flying hands and expert precision a cheroot maker in Myanmar can produce 100 hand-rolled cheroots per hour. Making a Cuban cigar is a much more complicated process because of the number of different leaves used, and the specific layering of the leaves. Nevertheless, a Cuban cigar maker can still manage to produce 100 per day.

Some time after leaving the farm we come to a “bridge”. Carlos tells us we have to get down from the cart and walk across it. The bridge is precarious, 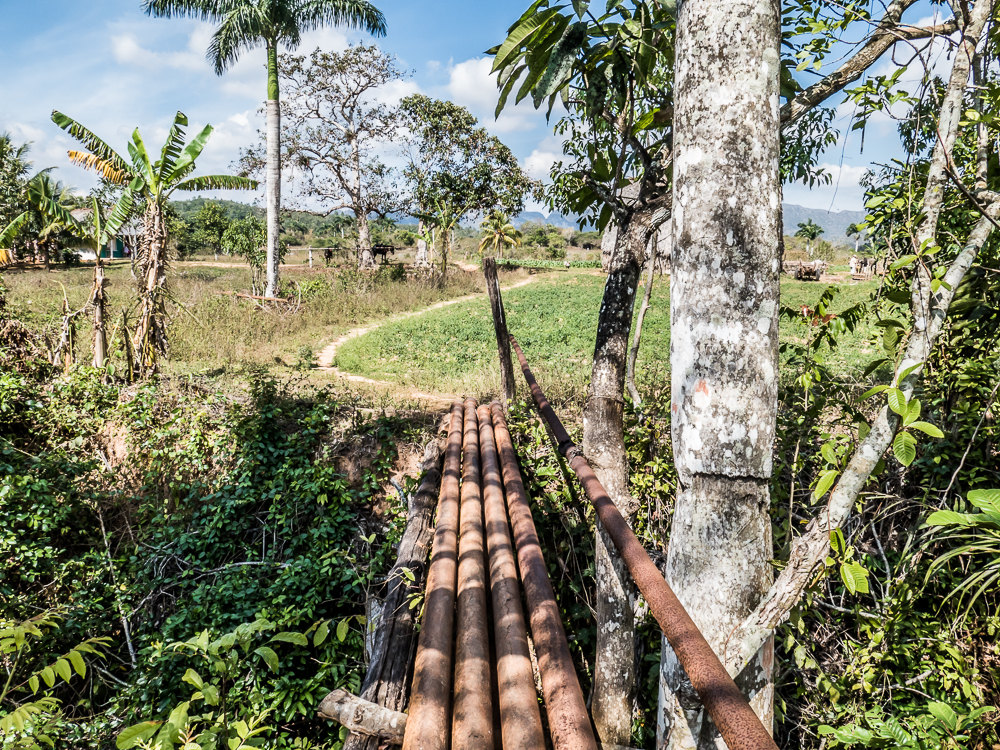 but we are happy to walk across it when we see Carlos will be taking the horse and cart down into a very steep and narrow gully and up the equally steep opposite side. Continuing on we pass more vagueros (cowboys)

and eventually come to the next stop where Carlos encourages us to climb down from the cart and climb up a hill. At the top we are rewarded with a cool drink from the girl at the simple wooden concession stand, and fabulous views. 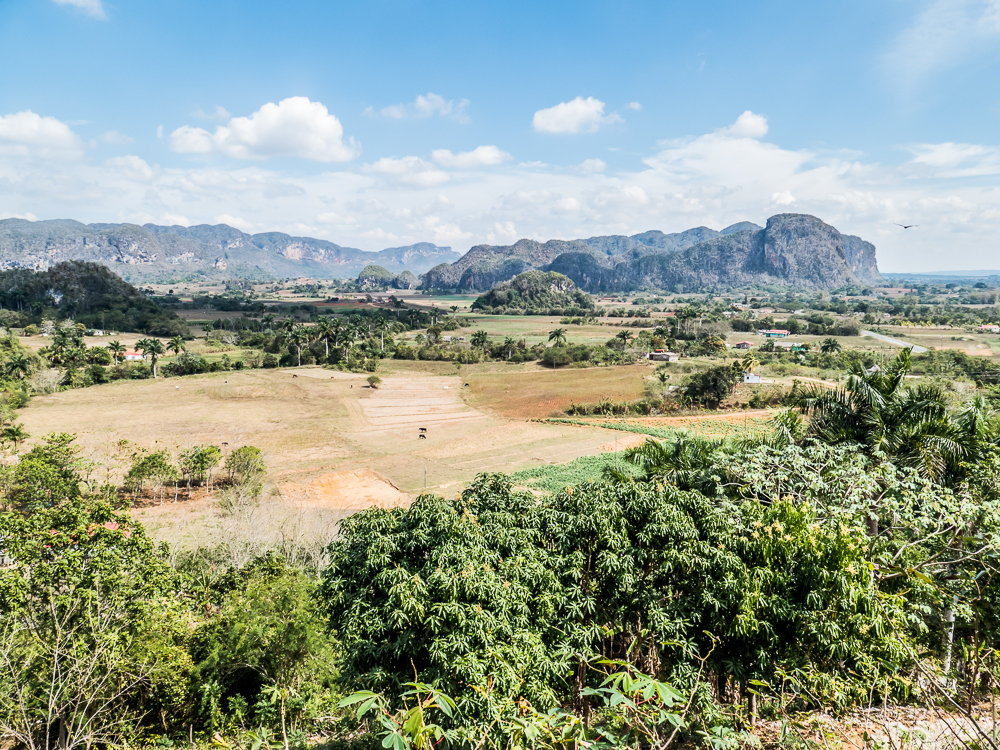 Travelling on we eventually come back to the road, and traffic,

and so back into town.

After a rest we decide to get a taxi to Las Jazmines (The Jasmines), a luxury hotel high on a hill at the edge of town. We are hoping for some Wi-Fi time and to have dinner there. As it turns out the Wi-Fi is slow, and it’s cooler than expected and we don’t have our jackets with us, so we end up having dinner in town. What we do get at Las Jazmines are views of the dazzling scenery 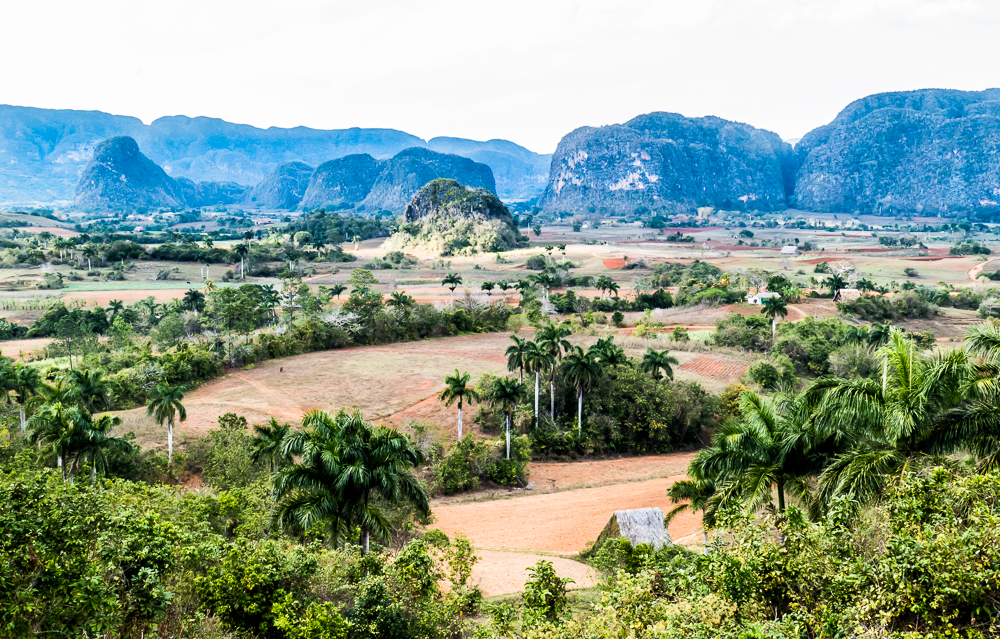 and a little later as the light changes

Viñales in the second most visited place in Cuba after Havana, and it’s not hard to understand why. Activities range from rock climbing, to horseback riding, to caving, to hiking, in some of the most spectacular scenery in the world. But it’s more than that. There’s something special about the place. There’s a relaxed easy feeling that’s missing in the city, as if peace arises from the earth itself and everybody is invited to take a share. We loved it there and could have happily stayed longer.Next post: Perhaps something about settling into life in Vancouver. Or perhaps something about Trinidad, our next stop in Cuba.All words and images by Alison Louise Armstrong unless otherwise noted
© Alison Louise Armstrong and Adventures in Wonderland – a pilgrimage of the heart, 2010-2017.