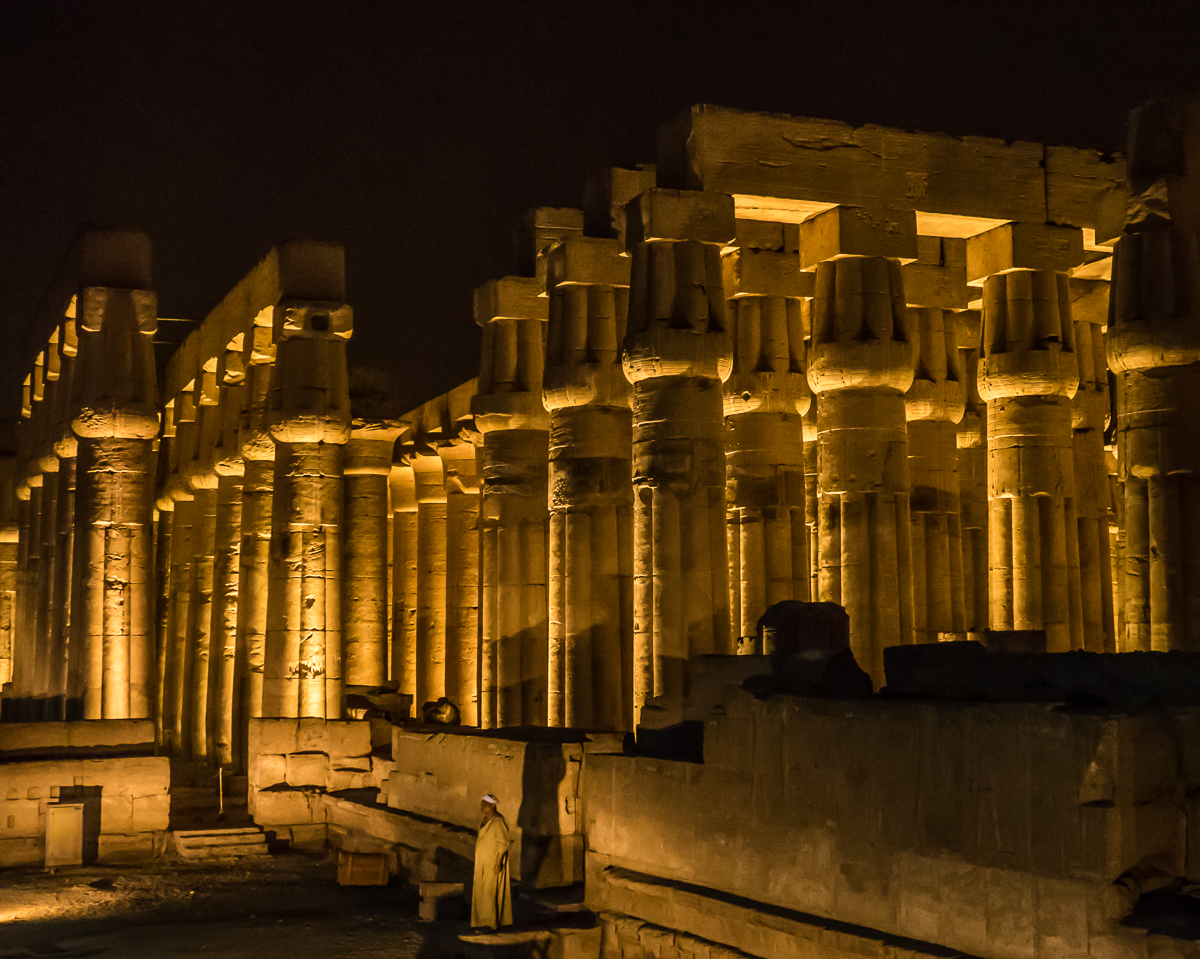 20 October 2015. One afternoon in Luxor: we start walking from the hotel to the local food market. We’re hassled by a horse and buggy driver. As is the way of all hawkers in Egypt, he is very persistent, so we agree to pay five Egyptian pounds to get a ride to the market. He takes us to the old market of narrow crowded dirt lanes and starts to take us through there. People are complaining because the horse and buggy is taking up all the space between the stalls.

And anyway we want to walk. We want to experience the market and the people up close, not from the height of the buggy. We get out. We don’t pay him because we have some concern that we won’t be able to find our way back to the hotel, but mostly because he won’t go away. He wants to take us to the camel market, and says he’ll wait for us.

We walk around the crowded market. There are tiny stalls on either side of the alleyways, which are barely two metres wide. Clothing, fruit and vegetables, eggs, grains, meat, the place is organized mayhem, crowds pushing everywhere, vendors shouting, the smell of raw meat, of rotting vegetables, of fresh fruit, of tobacco smoke, of spices, of live chickens cramped into small cages. 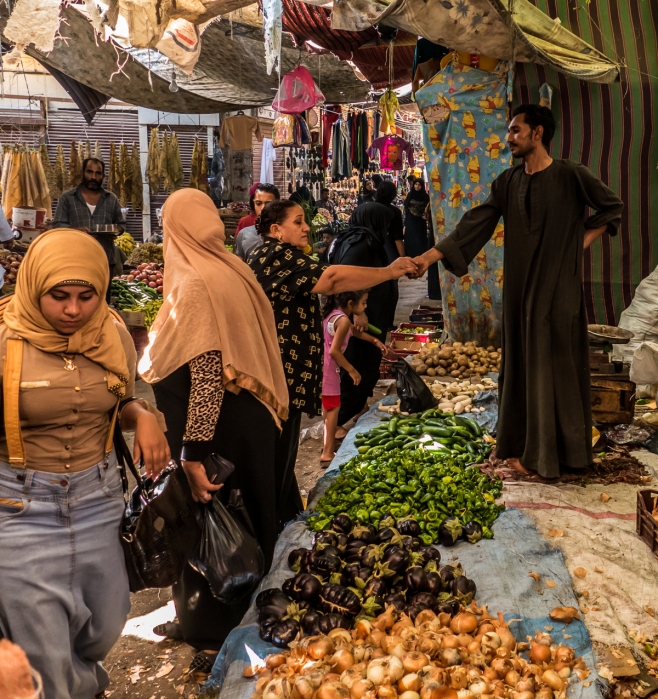 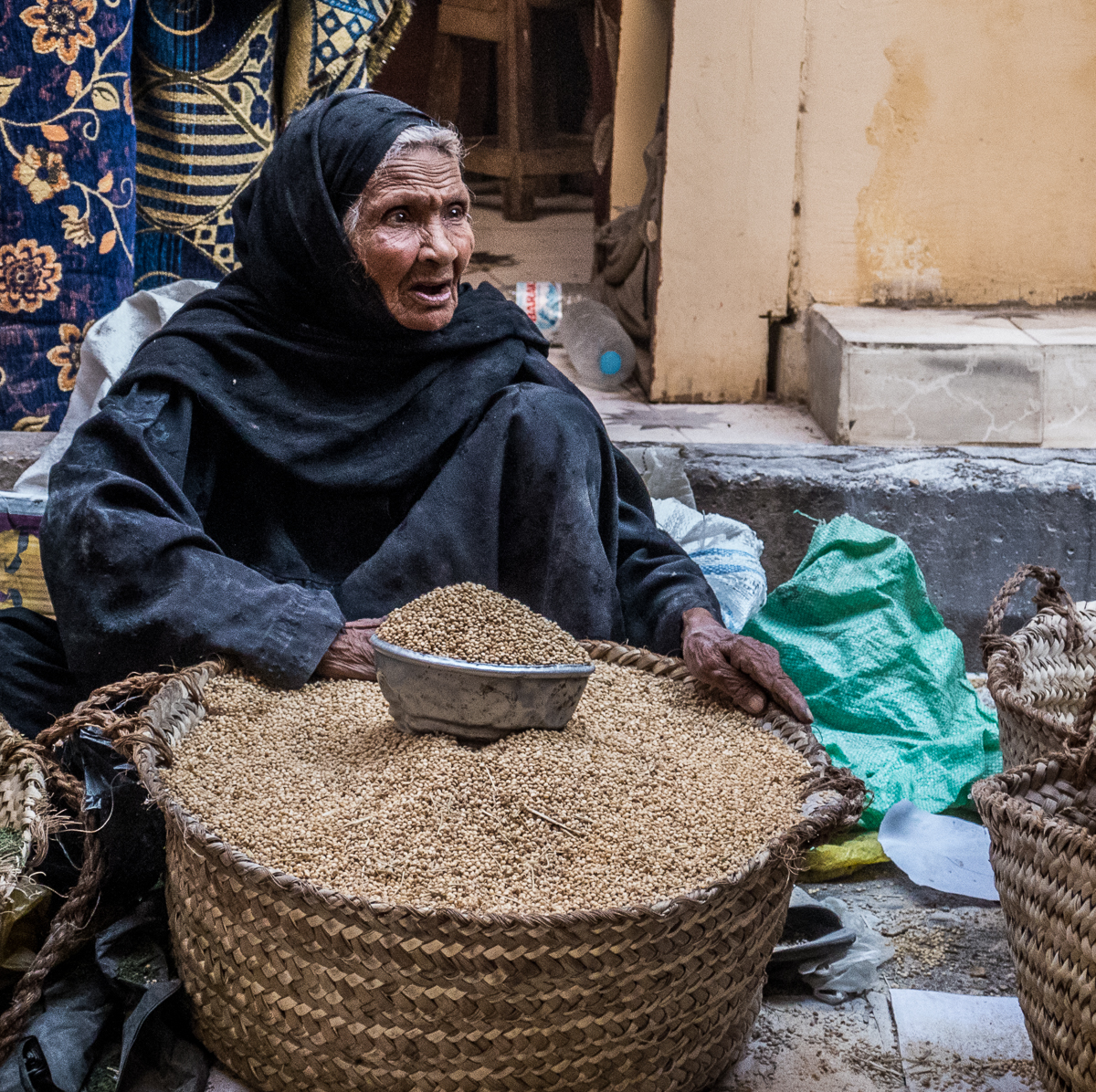 It’s bedlam, but everyone is focused and has a purpose for being there. The movement is like a river as people flow about their business.

We wander, and look, and say hello. People are friendly. Some want their photo taken. Some are taking a break from the madness. 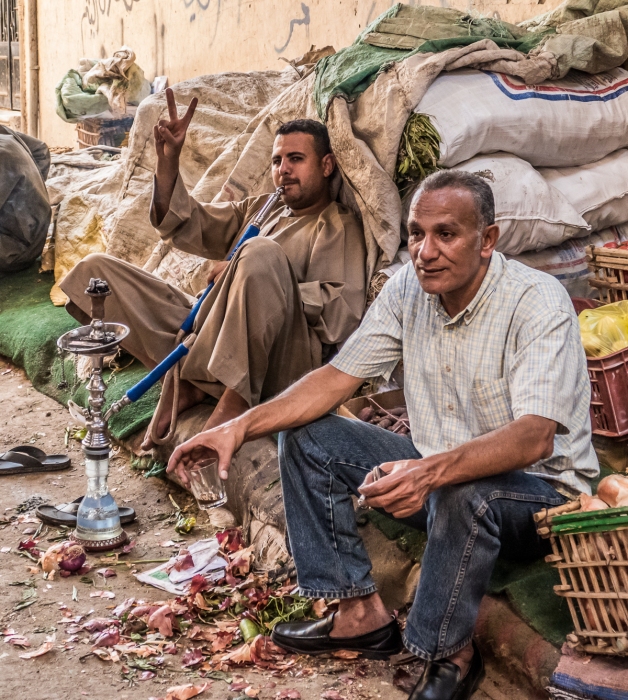 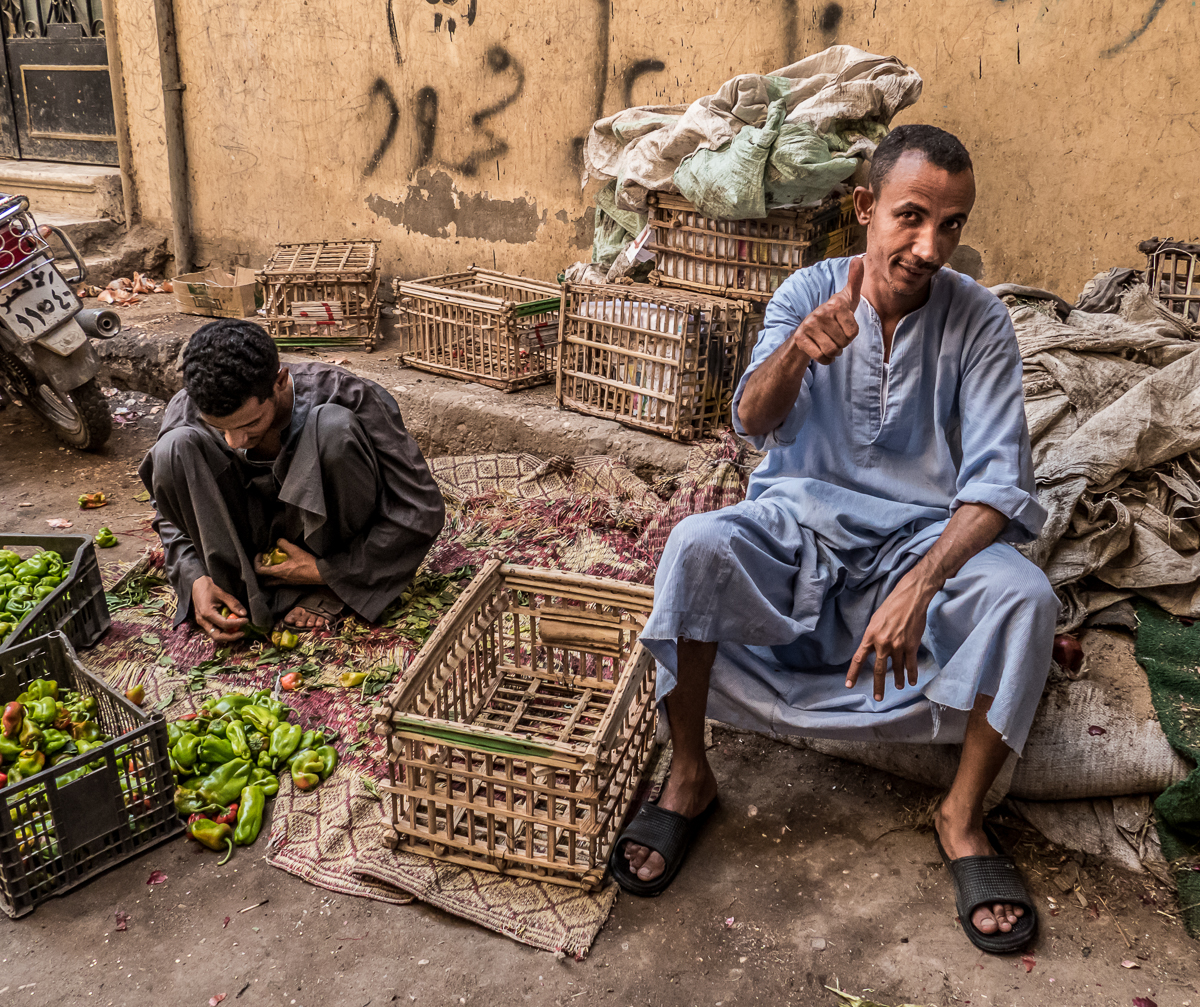 It’s quieter in the tributaries to the main stream. Here goods for sale are stored until needed, and here transportation baskets are stashed until the end of the day.

At some point in all this wandering and exploring we notice that our driver is shadowing us. He has apparently parked the horse and buggy down a side street and has been following our every move. Who can blame him? We haven’t paid him yet and he wants to take us to the camel market.

We come to the caged chickens. As I start to photograph them a man grabs one of the chickens, and an egg, and poses with it.

I immediately say no baksheesh (no tip) and take a couple of photos. He comes at me for payment. No one else has asked for payment, and some people have even requested photos, so I’m unprepared for this. He is persistent, but initially no worse than annoying. It is the aggressive child that starts to frighten me. The man persists, his tone becomes angry; the young boy becomes more and more aggressive. We don’t know what to do, but fortunately one of the many men who’ve been watching this little drama evolve pushes the man away from us, and we quickly leave.

On the first day of the tour Hoda, our fabulous guide, taught us la’ah, meaning no. I remember it by thinking of na’ah, which has the same meaning. She also taught us kalas meaning ‘go away’ to say very sternly to anyone hassling you more than you can stand. I remember kalas by thinking of alas. Alas I don’t want you around anymore, and alas you will not make a sale with me. Both have been useful words to know, and yet in the heat of the moment I don’t remember to use either.

We love local markets, and usually dive right in, but despite the friendly people this one feels stressful: there’s a tension highlighted by the chicken man and the aggressive boy and the on and off haggling with the horse and buggy driver. At one point we send him away and say we’ll meet him when we are ready. We have not yet renegotiated the price.

We rejoin our driver and climb into the buggy. Now he says he wants to take us to a bazaar because they will give him food and water for his horse if he takes us there. We believe him.

We are in and out of the “bazaar” in five minutes – it is filled with what we call “tourist tat” and nothing at all that we are remotely interested in buying. He says he was not given water for his horse because we didn’t buy anything. We believe him.

We set off to the camel market “which is only open on Tuesdays”. Of course it happens to be a Tuesday. We believe him.

We drive through the busy madness of Luxor where the traffic is relentless, and the market has spilled out onto the streets. 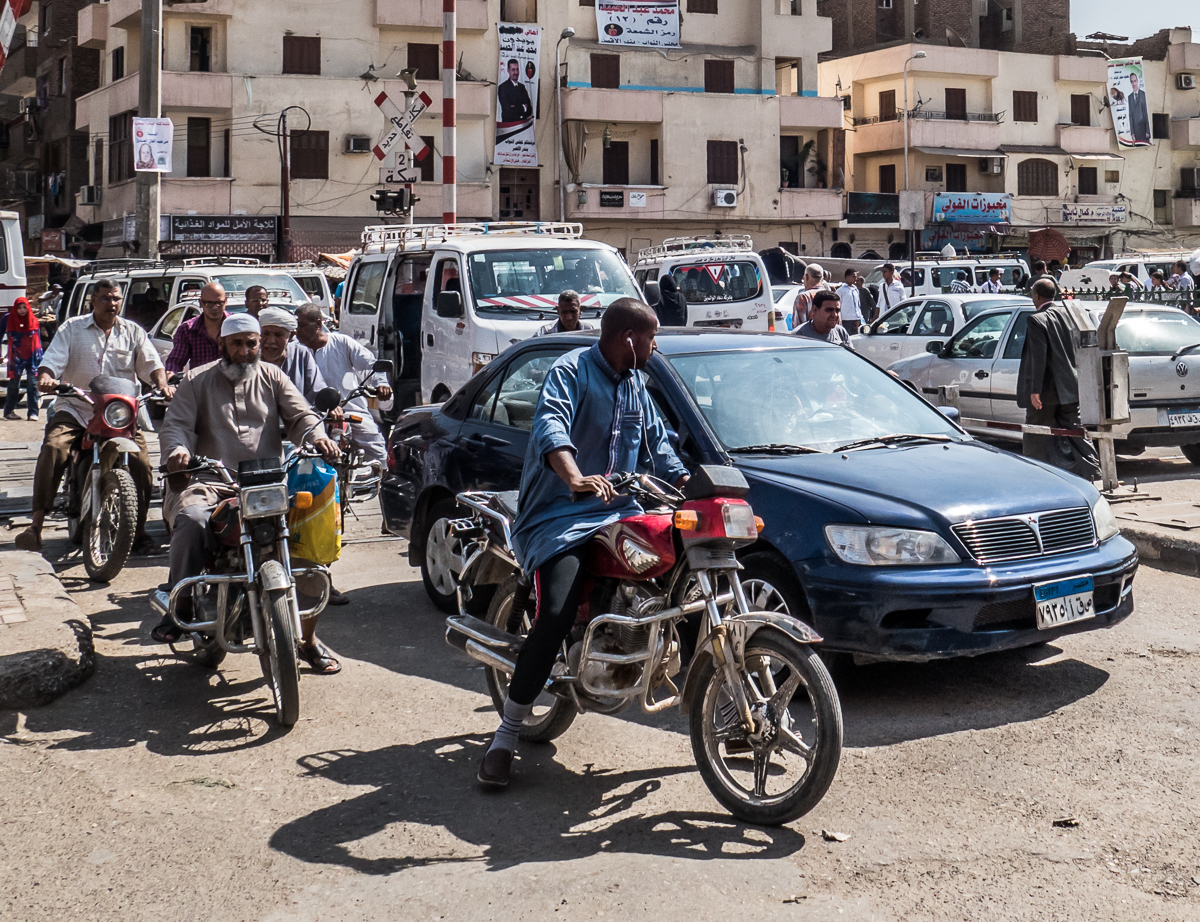 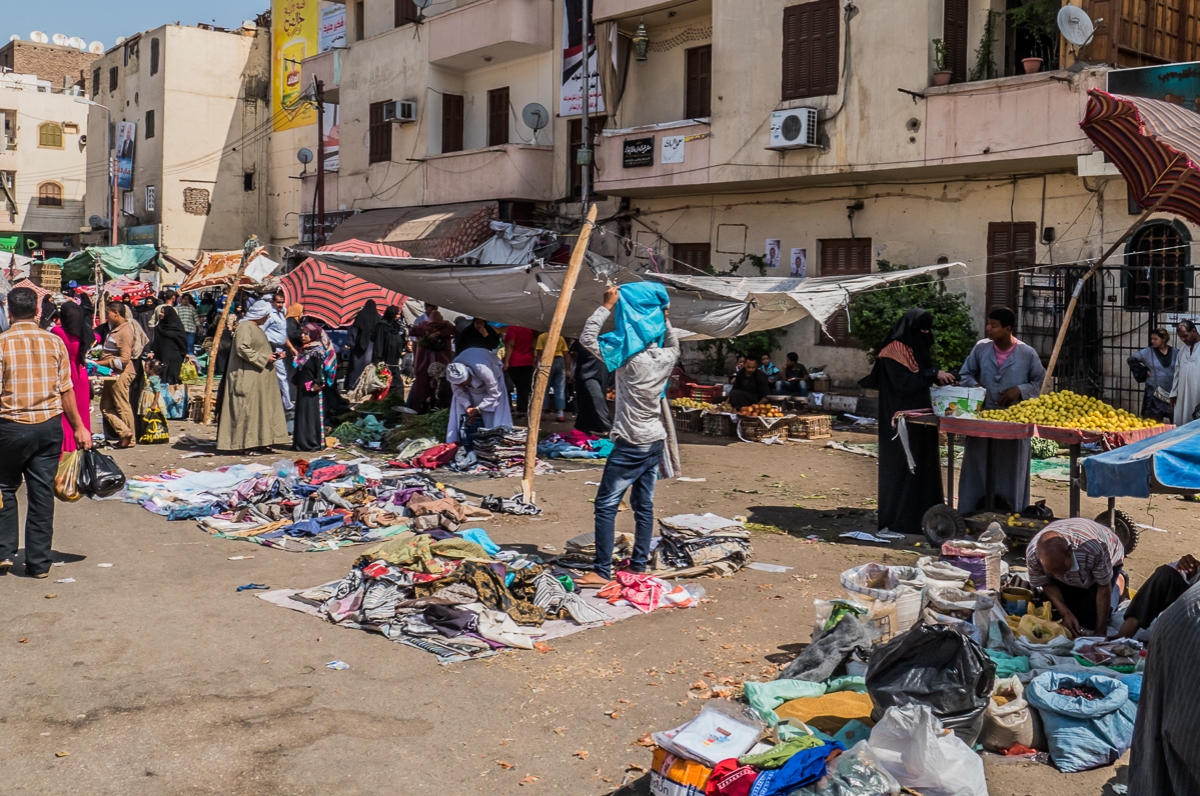 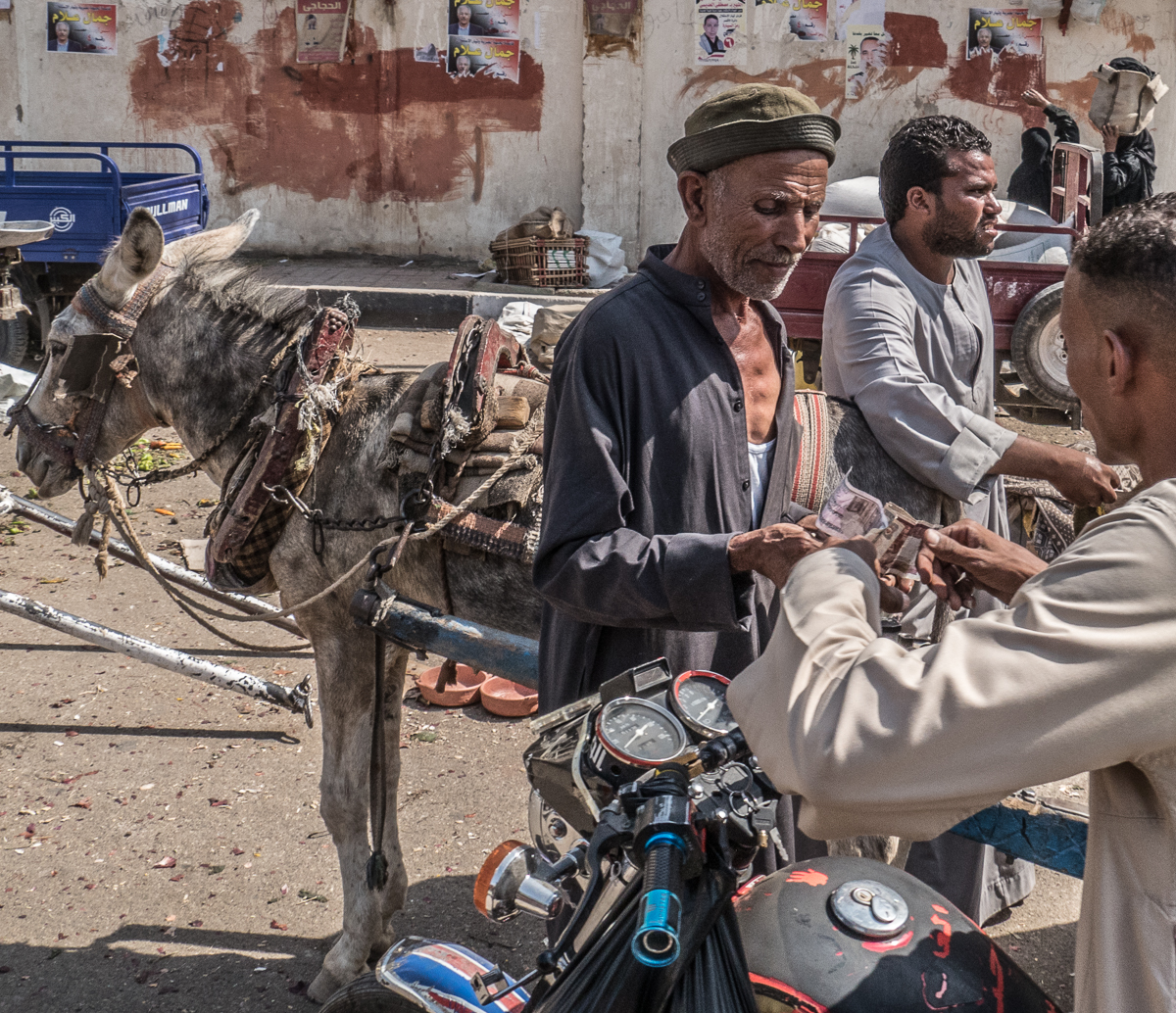 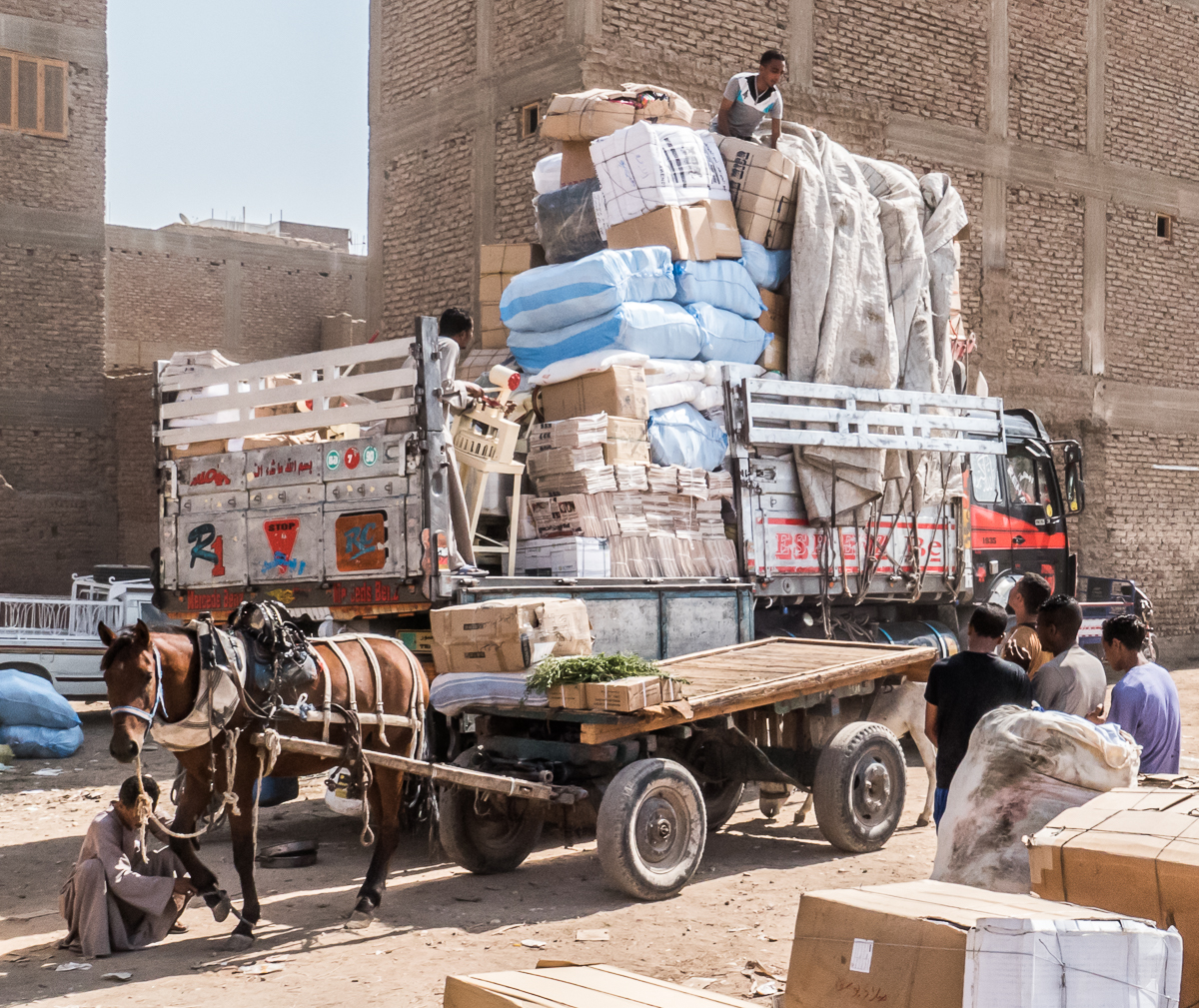 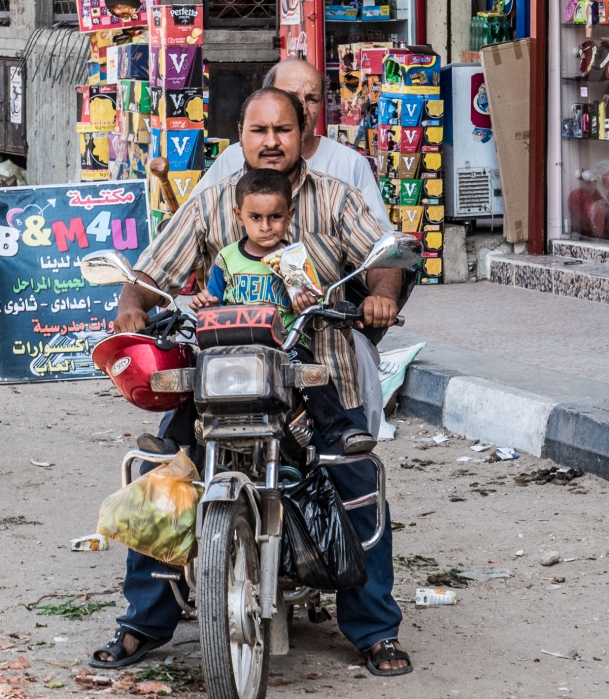 and down crowded narrow alleys. 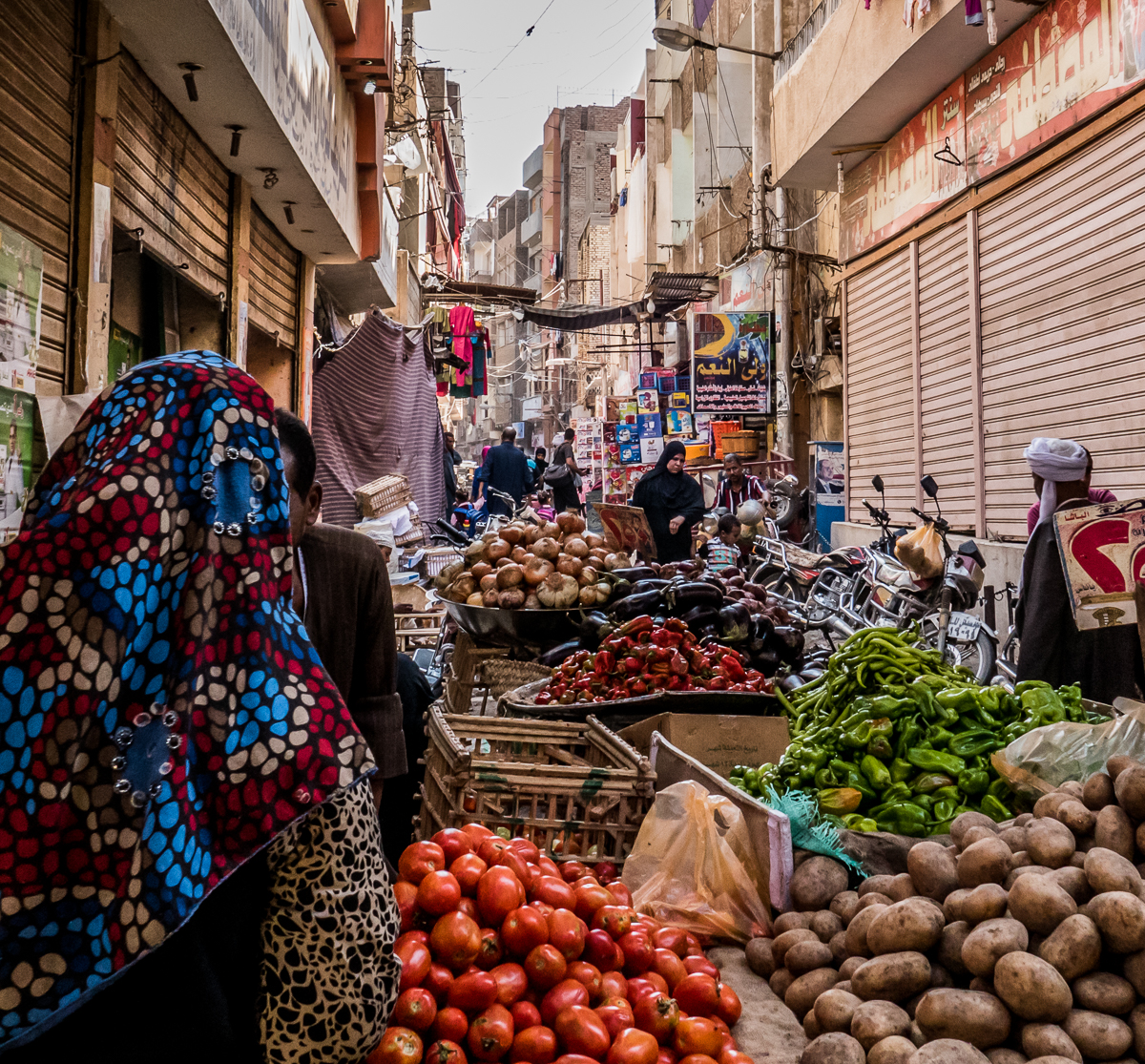 I will take you to the camel market, he says,

and we are aware that he could be taking us anywhere. As we trot along he tells us of his four children, and his poor horse Sophie, and how there’s been no business for five years since the tourists stopped coming. He’s pathetic and whiny and desperate and angry. Every horse that goes by he points out how skinny it is. He tells us that two hundred horses die every year. We believe him. He tells us that he has to pay for food for his horse. We believe him. He tells us that he has to pay for water for his horse. We are in a town situated on the banks of the biggest river in the world, and yet we believe him. He says again that he has four children. When I ask how old he says ten, and then hesitates, then says four, three, two, and one. Perhaps something is lost in translation. I want to believe him but I’m starting to have my doubts.

The “camel market” is a very sad courtyard containing three very sad horses, one of which stands in the blazing sun, and a donkey eating alfalfa. He tells us we’re too late; the camel market is finished for the day. We believe him, even though two days earlier another man had offered to take us to the camel market, saying, on a Sunday, that it is only open on Sunday.

By the time we get to our hotel we’d already agreed to pay fifty Egyptian pounds, but he pleads for more so we end up paying seventy.

Whatever lies he told us, there are very few tourists in Egypt these days, business is not good, and people really are struggling. We were taken for a ride in every way possible. We always start out suspicious, and haggle hard, and then grow tired of the game. We are suckers every time for a hard luck story. Every time. And he was very good at his job. Whatever the lies, whatever the circumstances, we are are better off than they are and it feels so mean and so cheap to keep arguing about the price. In the end we paid him the equivalent of Canadian $12 to be driven to the market, and then all around town on a wild goose chase. We did get to see more of Luxor, and I got to rest my poor aching hips.

And this is what we learn from Hoda: No horses are dying. If they can’t afford to keep the horse they sell it. And for the past year the government has been paying horse and buggy owners a pension of 700 pounds per month for the care of their horses.
There is no camel market in Luxor.
And oh good lord I’m embarrassed to admit we believed he had to pay for water for the horse! Really! What was I thinking? Or more accurately not thinking. As I said, we’re next to the biggest river in the world, and in Edfu I’d seen horses being washed in the river so I knew they took their horses down there, and yet I believed he had to pay for water for his horse. Face palm! Everyone has to pay their taxes. Apparently it was time for us to pay Stoopid Tax!

That afternoon, safely back together with Hoda, we go to the extraordinary Great Temple at Karnak. It’s another of those places of the ancient world that I learned about in high school. It is the largest religious building ever constructed. It is a city of temples built over two thousand years and covering two hundred acres, and for the largely uneducated population it must have been truly awe-inspiring.

It’s hard to conceive of the power of Karnak. It was the religious and political centre of the world for the ancient Egyptians, it was the place where the pharaoh was linked in ceremony to the god Amun, where the pharaoh was deemed and seen to be also a god, where ordinary people came in devotion and supplication and obeisance, and where religious rituals and ceremonies were carried out on a grand scale. Karnak was the centre of the universe.

This is what we see today.

A model of the temple complex in the entrance foyer. 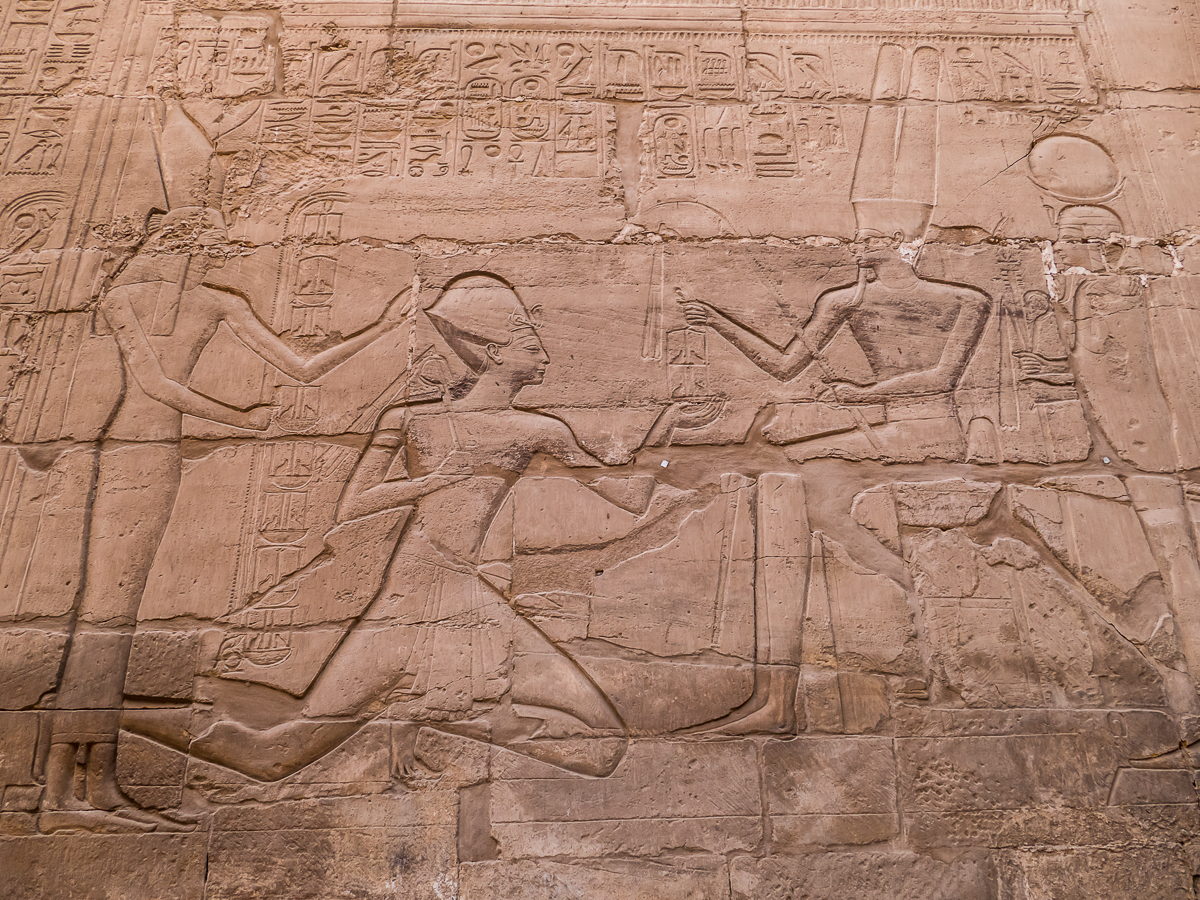 The entrance to the hypostyle hall

The scale is breathtaking. The hall covers an area of 50,000 square feet and is filled with 134 enormous columns eighty feet tall. In ancient times, the columns, and indeed the entire temple complex was painted in brilliant colours.

The sacred lake was used for ritual washing, and was home for the sacred geese of Amun. It was surrounded by storerooms and living quarters for the priests. 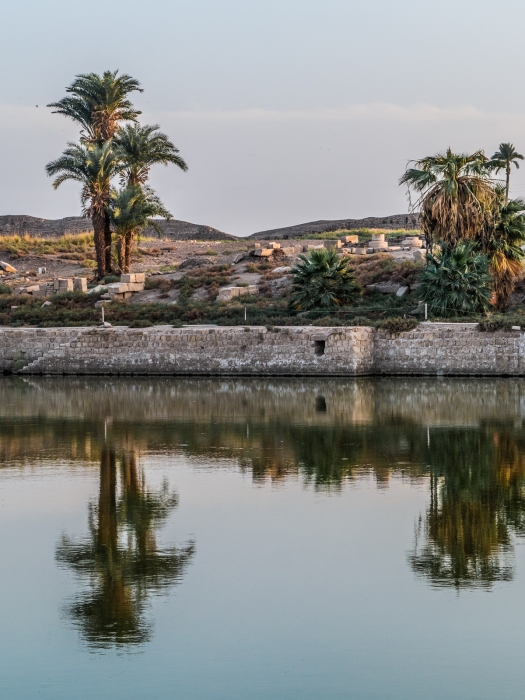 One can only imagine the power plays and politics that went on over the years within the walls of this vast religious complex. And get this: during the big religious festivals sometimes some of the ordinary people were allowed into the depths of the temple to question the gods. The replies came from priests hidden inside statues.

From Luxor we fly back to Cairo, coming full circle on our journey through Egypt.

67 thoughts on “Taken for a ride in Luxor. And the Biggest Religious Building of all Time.”