16-17 October 2015. In 1813 in the land of Nubia a boy living on the banks of the Nile showed Jean-Louis Burckhardt, the Swiss explorer, some colossal rock heads protruding from the sand. Burckhardt told his friend Giovanni Belzoni, and in 1817 Belzoni began excavating the site. One of these two explorers named the site for the young boy. The original name of the site is unknown, a chimera, lost to history.

The boy’s name was Abu Simbel.

What Belzoni uncovered is two immense temples cut into the cliff face that rival the greatest of the monumental temples of the world. The temples are man-made caves, and the sheer size is breathtaking. The façade of the Great Temple, dedicated to Ra-Horakty, Ptah, Amun-Ra, and the deified Ramses II, is thirty metres (100ft) high, the height of a ten-story building, and thirty-six metres (119ft) wide. Four colossi of Ramses II, known as the Great, seated on his throne, flank the entrance, two on either side.

The Small Temple is twelve metres (40ft) high and twenty-eight metres (92ft) wide. It is dedicated to the goddess Hathor and to Nefertari, Ramses’ primary wife. There are six colossi flanking the entrance, four of Ramses and two of Nefertari. They are ten metres (33ft) high.

With the construction of the Aswan High Dam and the expected subsequent flooding of the land above it, a heroic mission was carried out. Sponsored by UNESCO, the Government of Egypt, and many other nations, and at a cost of US$40 million, between 1964 and 1968 both temples were dismantled, cut into thousands of pieces and moved up onto the plateau of the cliffs they once sat below. The exact orientation was maintained, and a man-made mountain was created to give the impression of the temples being cut into the cliff.

More than three thousand years ago Ramses the Great had the temples built on a site that had long been sacred. It’s likely he chose this site to promote his status as a god among gods and to display his power and omnipotence to the people of Nubia. 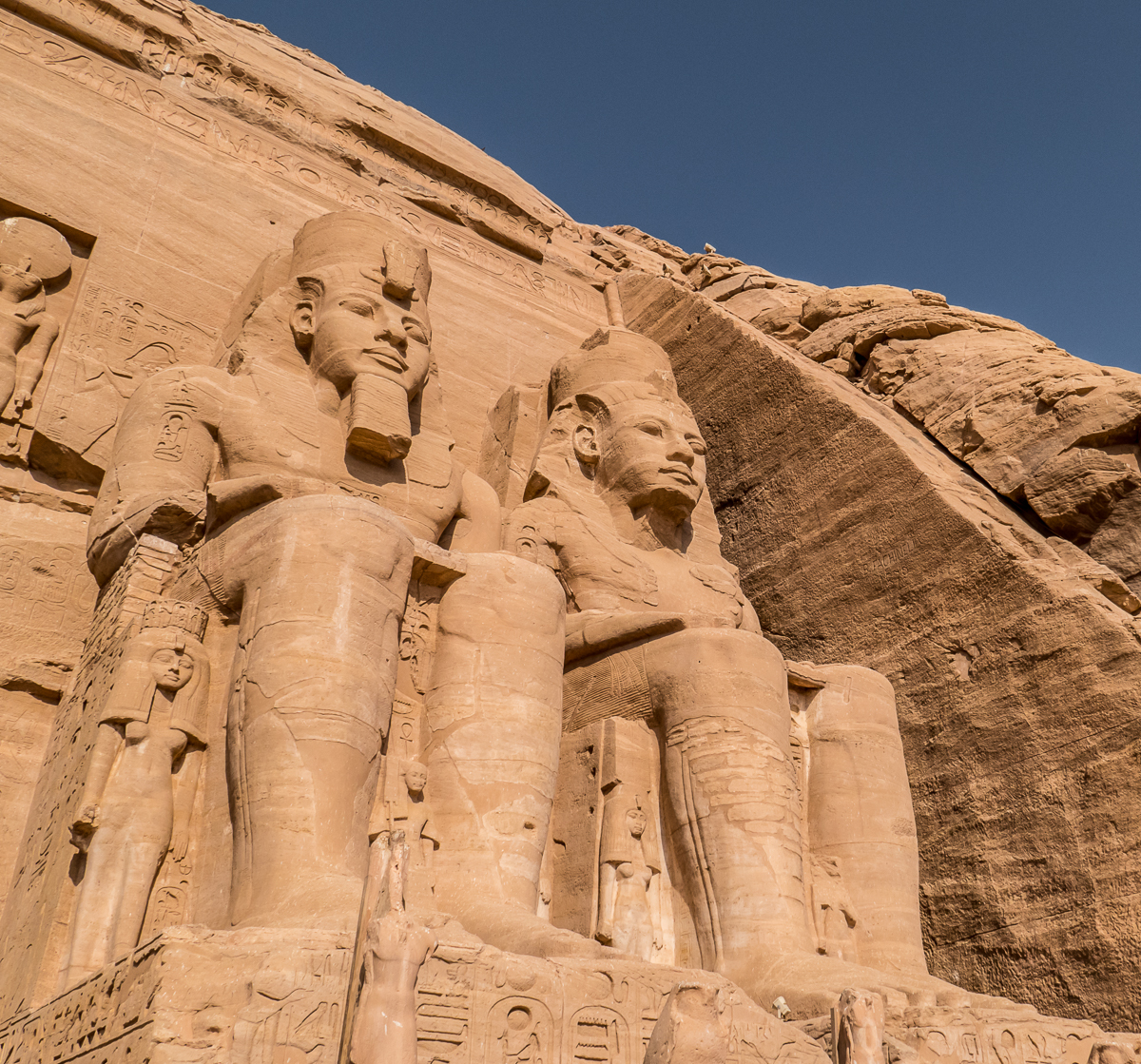 The alignment of the Great Temple is such that on the 22nd of February and the 22nd of October every year the morning sun streams in along the main entrance hall all the way into the innermost sanctuary and lights up the statues of Ramses and Amun-Ra.

Beyond the entrance there are a series of decorated halls. As I explore the halls I feel a visceral reaction. There are painted relief carvings of the king on every wall. We see him engaged in warfare, smiting his enemies, riding his chariot, and making offerings to his gods. 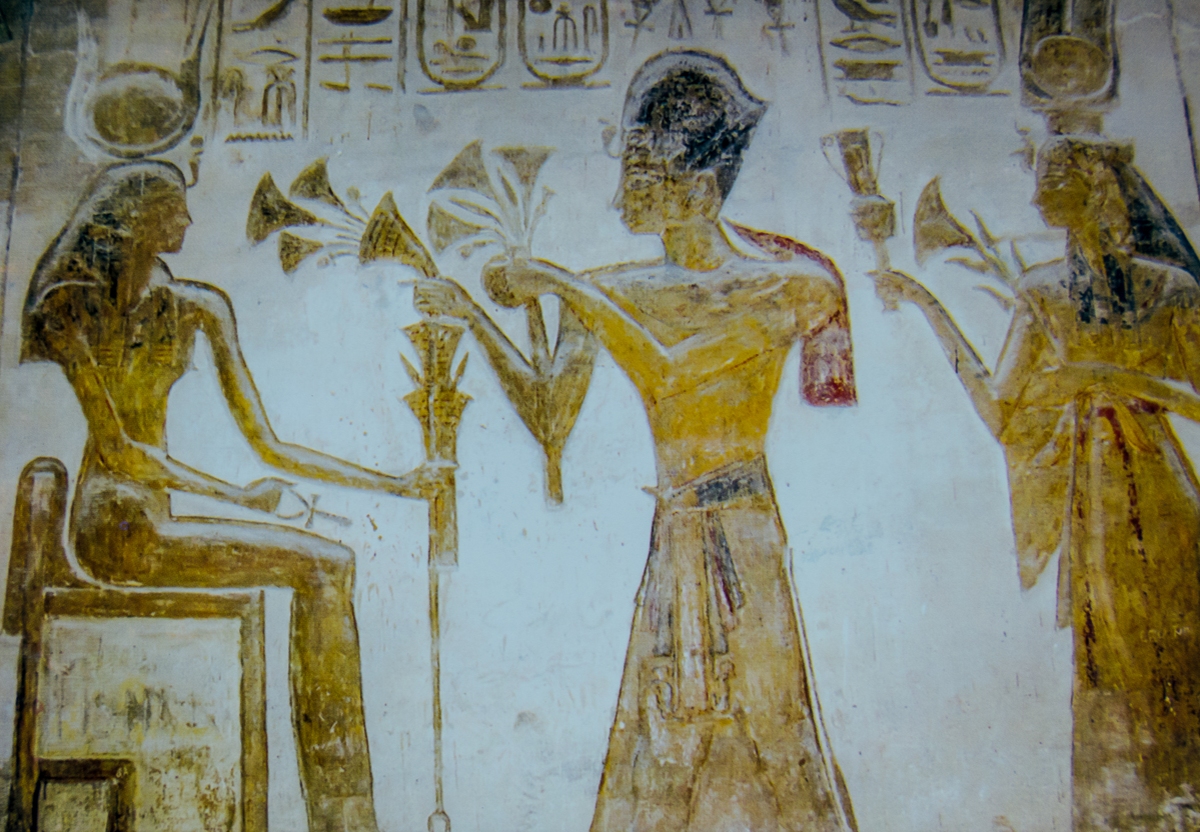 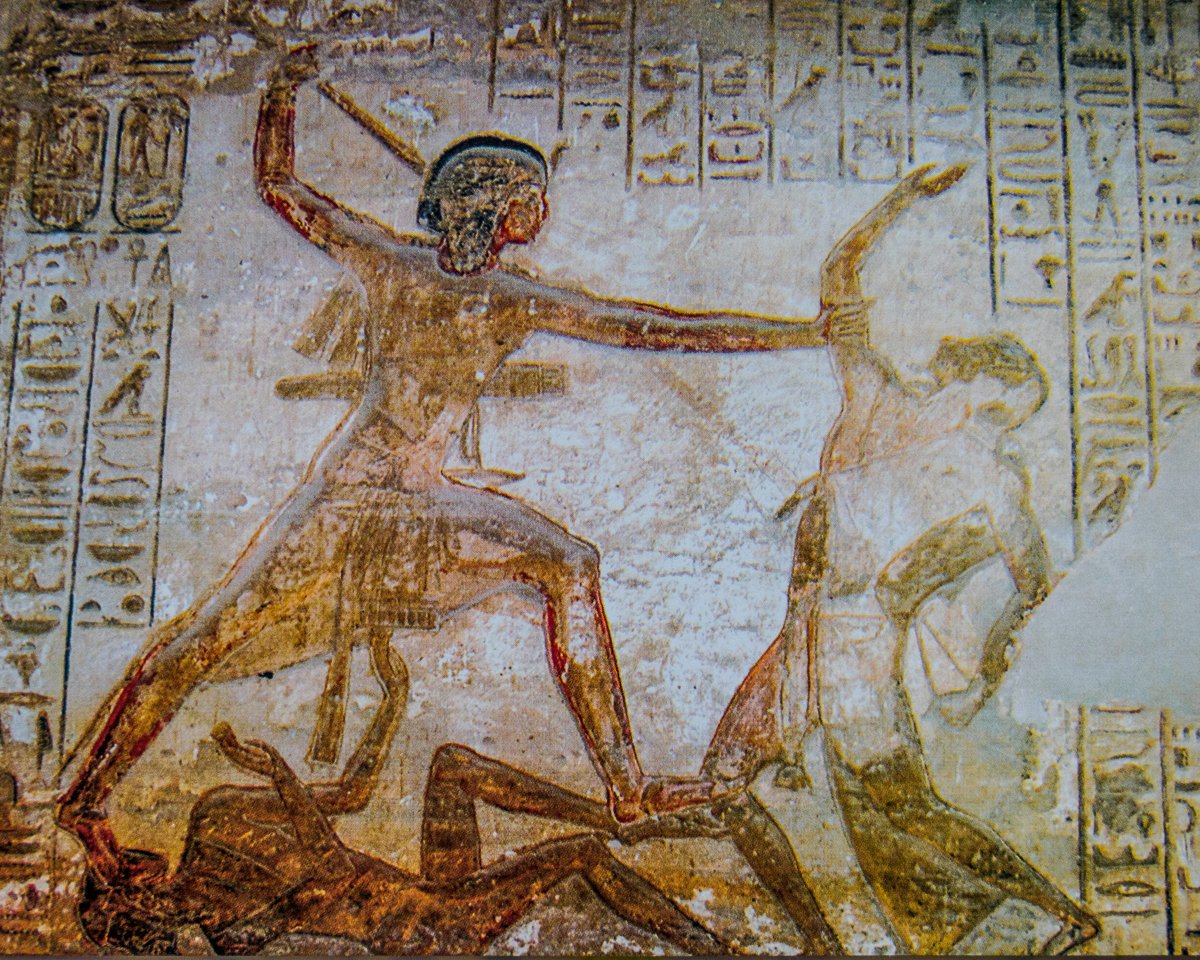 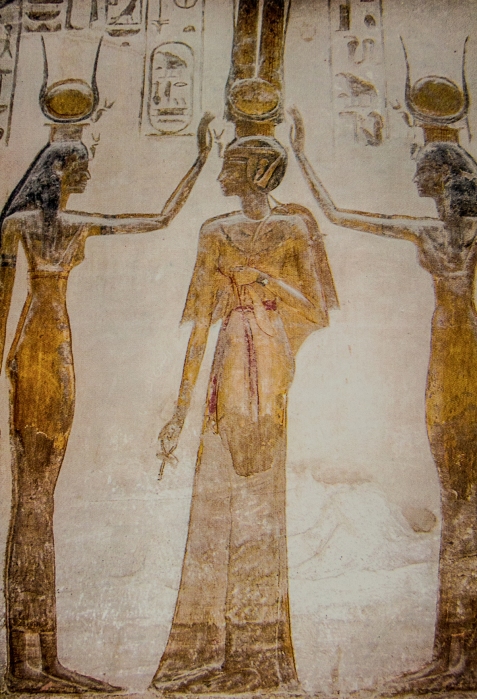 As I go from room to room the feeling grows. Is it that I’m feeling the years of devotion of the king and his priests? Is it the devotion of those who built the temple, carved it into the mountain, and carved and painted the relief carvings that cover every wall? Is it that I’ve been here in another lifetime? Is it the devotion I’m feeling of all the people from so many different nations who cared enough to contribute to moving the entire temple to higher ground so it would be preserved for everyone? Is it that I’m finally here in this astonishing and magnificent place that I learned about so long ago? Is it all of the above? I don’t know. I do know that I’m in tears from the feeling that wells up inside me being surrounded by this genius of creative beauty over three thousand years old. I am undone with the power of this place. I wander from room to room taking in the painted reliefs, glad to be here and surprised by how moved I am. I would love to be able to spend the night here.

Interior of the Small Temple, dedicated to Hathor and Nefertari

Like all the ancient Egyptian temples the exteriors of these temples would have been brightly coloured. This painting, by noted Egyptian artist Hussein Amin Bicar, captures something of the Great Temple’s original splendour. Unabashed magnificence! 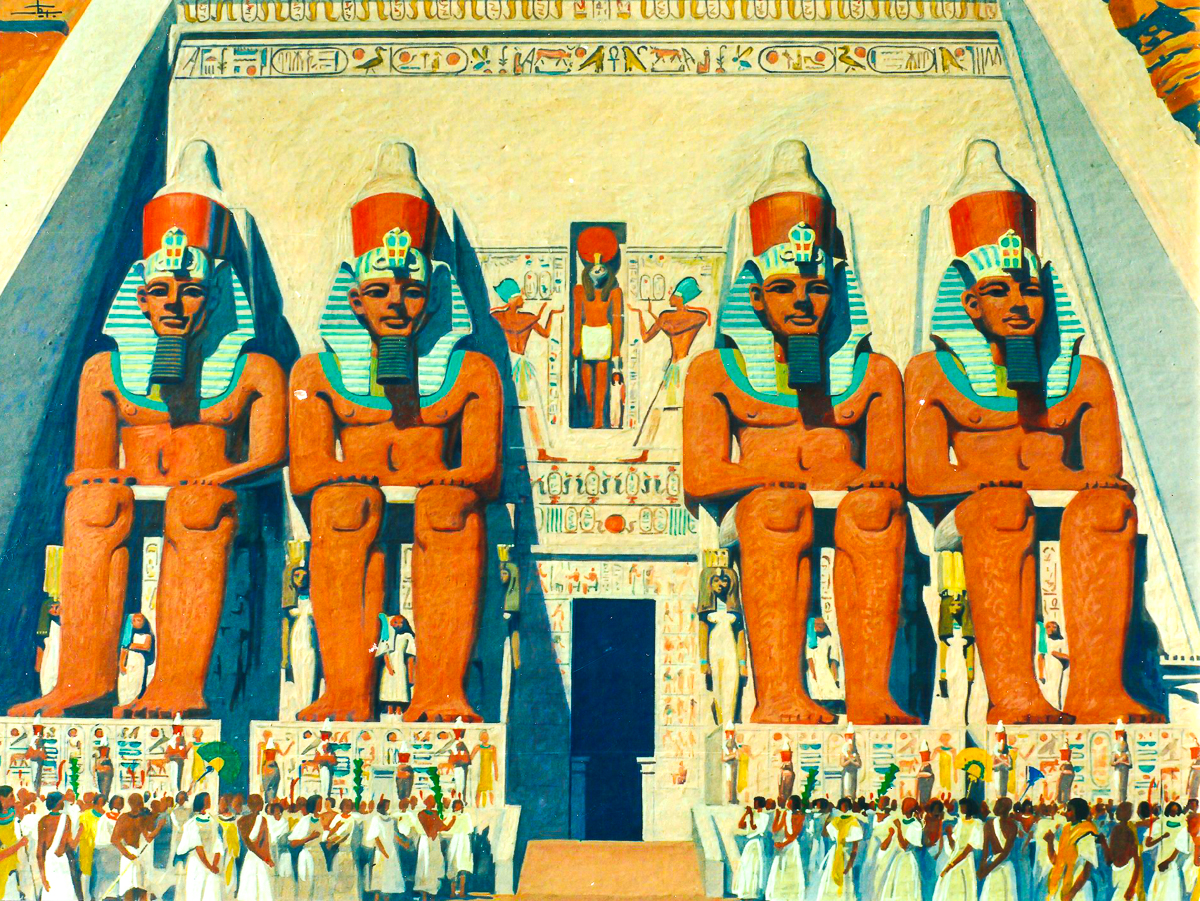 On a more prosaic note, Sapper I.R.W. Beal of the Royal Engineers left his mark on the leg of one of the monumental statues of Ramses way back in 1892. 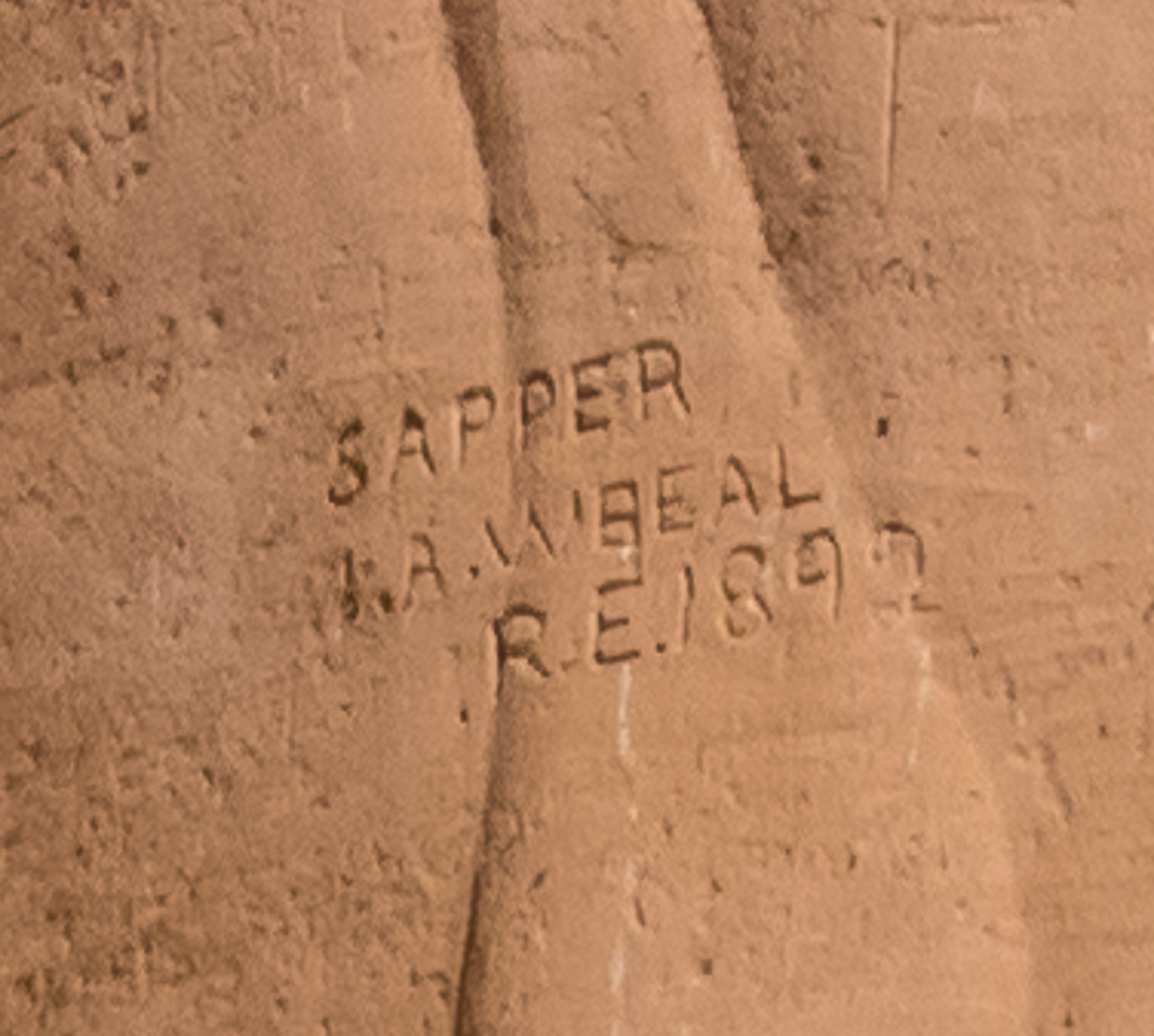 We flew to Abu Simbel from Aswan. We had some spare time at the airport waiting for the flight back. I noticed about twenty large potted plants scattered throughout the airport lounge. They clearly had not been watered in a long time and were wilting in the heat. I amused myself by repeatedly filling my water bottle in the bathroom and watering all the plants. Some things just cry out to be done.

In high school I learned that the Egyptians made paper from the papyrus plant, and that the English word paper came from this source. It puzzled me. How could you make paper from a plant? In Aswan I got the answer in a demonstration.

Papyrus has been growing on the banks of the Nile for more than 5000 years. The tougher flexible outer part of the stem is cut off and used for making mats. The core of the stem, which is less flexible and can be easily broken, is cut into thin slices lengthwise and rolled flat to remove any excess liquid. This makes it strong and flexible. It is then soaked in water for six days. These strips are then laid flat in a weaving pattern – one down, one across and so on. The piece of paper is then put under a press for 6 days. Fake papyrus paper shows the joins going in only one direction and is made from sugar cane or some part of the banana palm.

So all of this needs to be discovered: that if you take the core of the stem of a papyrus frond, not the stem, or the leaves, but the core of the stem, slice it thin lengthwise, roll the strips flat, soak them in water for six days, lay the strips together in a weave pattern, and then press the whole thing for another six days you will then come up with something you can write on. How would you discover that? Who would discover that? Human ingenuity and creativity continues to amaze me.

About fifty kilometres down river from Aswan is the temple of Kom Ombo. 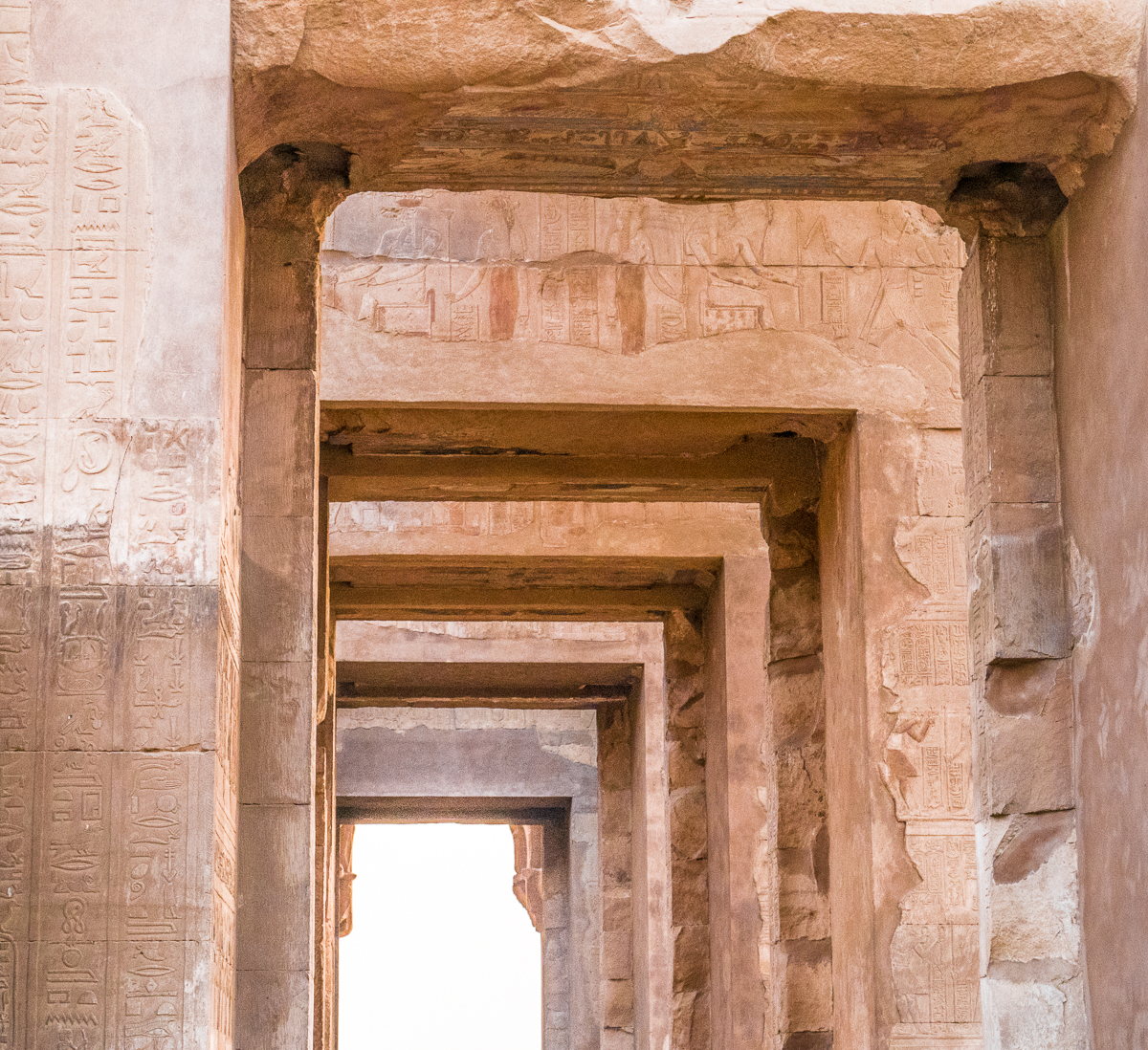 It’s a double temple dedicated to Horus the falcon-headed god and his enemy Sobek, the crocodile god. Sobek was viewed as a creator god and master of the universe.

Yes, the Egyptians had a crocodile god. A captive crocodile was kept within the temple and believed to be an earthly incarnation of Sobek himself. After its death it was mummified, and buried with much ceremony. There is a crocodile cemetery close to this temple that yielded vast numbers of crocodile mummies. The priests would then identify a new crocodile to be host to the divine spirit of Sobek.

From a sign at the crocodile museum: The ancient Egyptians believed that the gods sent physical manifestations of themselves to earth in the form of their totemic animals. Thus at Sobek temples a live crocodile was thought to contain a spark of the god within and was worshipped and cared for by the priests during its lifetime. After its death the spirit of the god would move to another crocodile’s body.

Apparently, when there were still crocodiles in the Nile north of the Aswan Dam, quite a number of them liked to gather in this area, and no doubt more than a few people over the years were croc dinner. It is not surprising that the people went in fear. They hoped that by honouring the crocodile as a god they would be safe from attacks.

The Nile crocodile is the most dangerous of all the crocodilians. They can reach up to six metres (20ft) in length and have a fiercely strong jaw. Once it clamps onto something it’s impossible to get it to let go. It is an opportunistic ambush predator, and can take down everything from a hippopotamus to a human. Living by such a creature I think I’d be praying to its god too.

There were healing priests at this temple and it was a place of pilgrimage for people who were ill. This ancient graffiti possibly shows the name and date of a person who came for healing. I guess we all like to leave our mark.

We’d travelled to Kom Ombo from Aswan by boat. After nearly three days in Aswan we began a three-day journey down the Nile to Luxor on a luxury cruise boat. Next post: the Nile cruise. 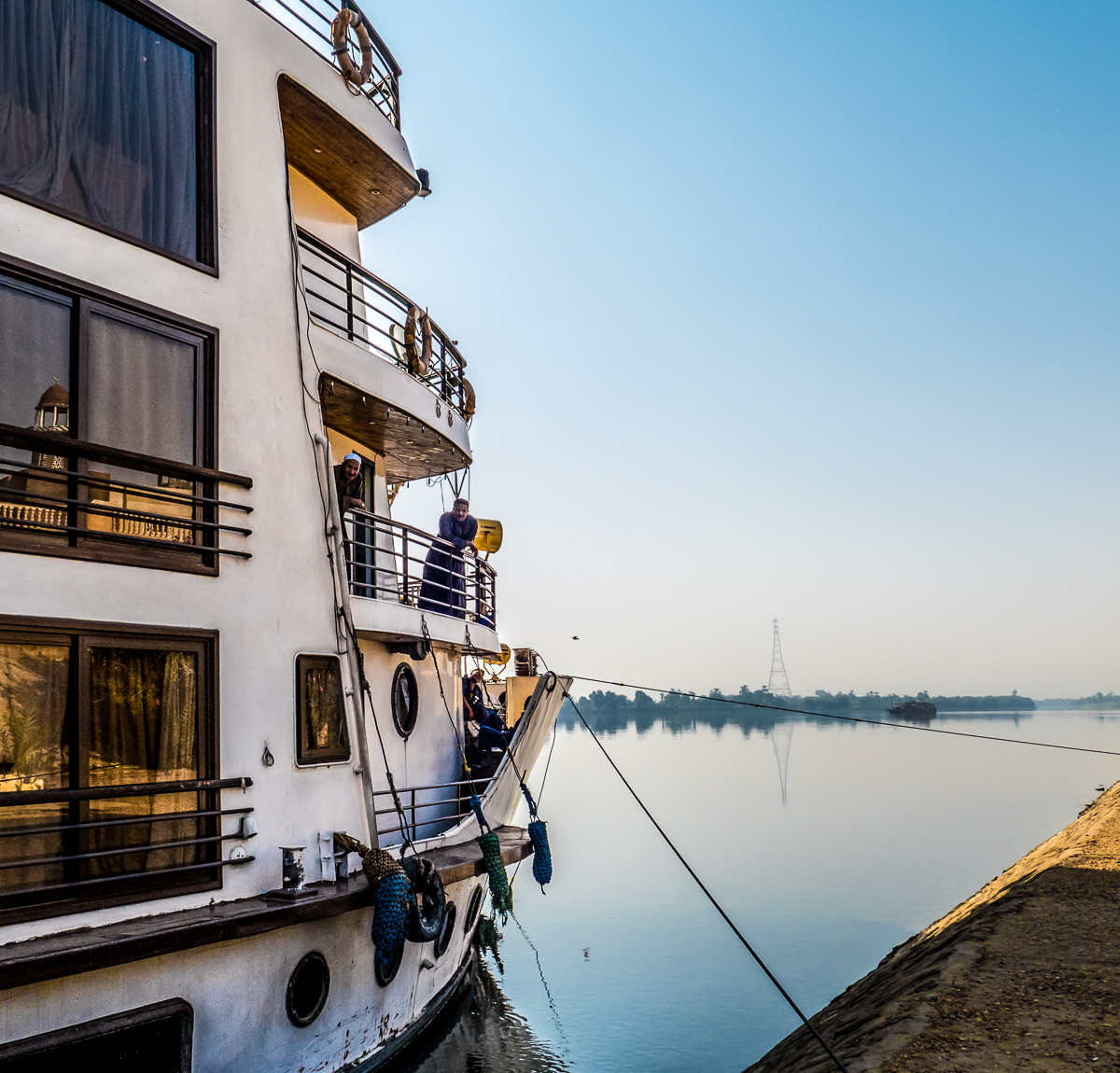