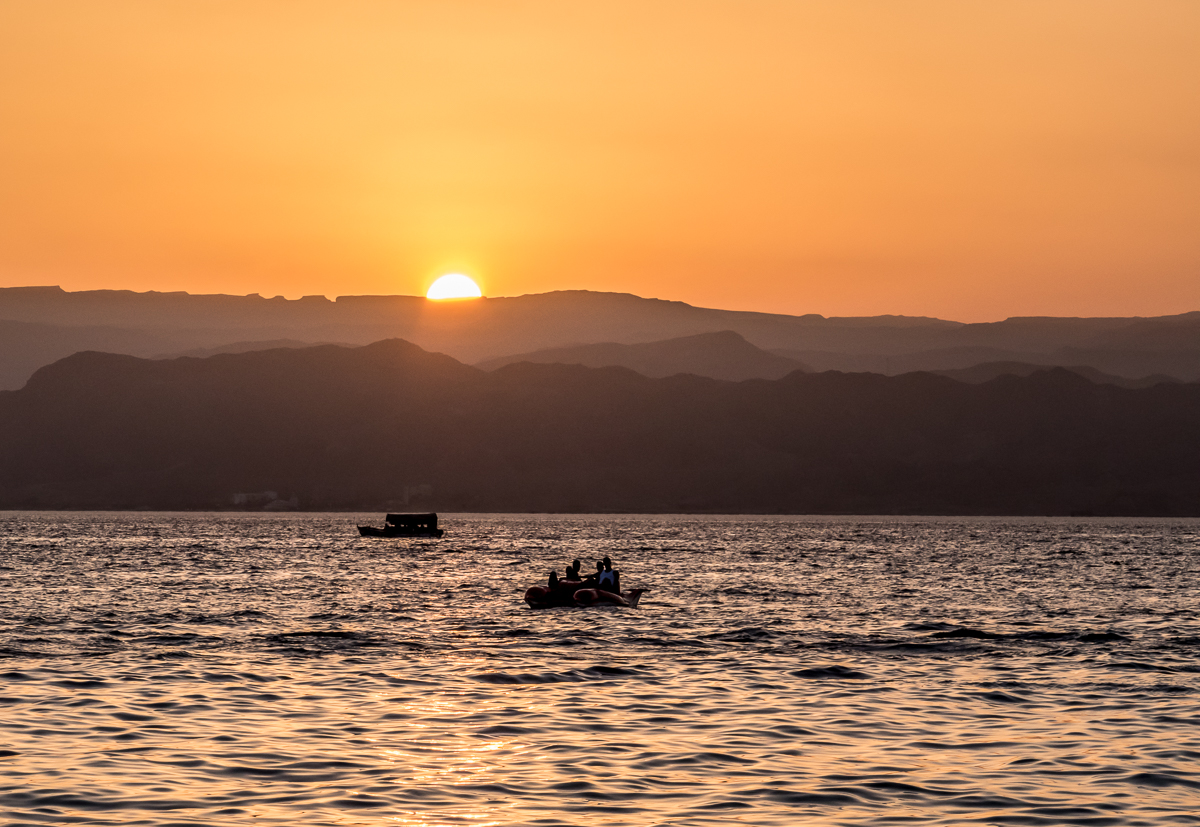 Along the way, at the request of the group, our guide talks about his religion. He is very devout. His desire is to learn the entire Koran by heart. He is a nice man: friendly, funny, engaging, knowledgeable. From the way he talks about his family I am sure he is also a very good man, but he loses me when he says men can’t control themselves and if a woman is not covered up and a man behaves inappropriately towards her it’s her fault and the man is not responsible.

What a heartbreaking imprisonment for women to need to be covered all the time, but more than that, what a sad sad indictment against men. Surely men are better than that? Surely boys can be raised to be better men than that? Instead they are taught both directly and indirectly, by osmosis, that they will grow up to be little better than animals unable to control their urges, and since they can’t then it must be the woman’s fault if she is violated.

And so each gender remains confined: the women imprisoned from head to foot in hot cloth and able to participate only in circumscribed activities when beyond the confines of their own home, and the men imprisoned by a conditioned idea that they are helpless in the face of their biological urges and are therefore not responsible for their actions. She made me do it. What a monstrous excuse for bad behaviour. In my experience men are better than that. And they deserve better than that.

I’ve read of Muslim women who say they like being covered, that they are treated with more respect, and feel safer. And I’m sure that is true, but it still comes back down to the same issue: that men are taught that they can’t control themselves and that therefore women need to fear them and hide from them, and that if they are violated it’s their own fault.

There are no winners in this. Women are imprisoned, and men never know the sense of integrity and self-worth that comes from taking responsibility for their actions.

Our guide knows I am distressed by his position. Angry. Frustrated. Sad. Just because something is part of the culture doesn’t make it right. When the bus stops and we all get off for a break he comes to me to give me a hug, which I return. I quietly say to him you will never get me to agree with you, and I know I will never get you to agree with me. And we leave it at that. But it haunts me, this double standard, this “tradition” that does a great disservice to both women and men.

Aqaba, lying at the northeastern tip of the Red Sea, is Jordan’s only coastal city, a major container port and something of a tourist party town. Down at the marina we climb aboard a motorized yacht for a four-hour cruise. It’s not a pretty coast. There’s the container port

and the harsh brown gravelly land, but the sun is hot, the sky is clear, and the sea a deep rich blue.

We pass intermittent strings of sparse struggling palm trees, behind them hints of small towns and industrial activity, and some local beaches. 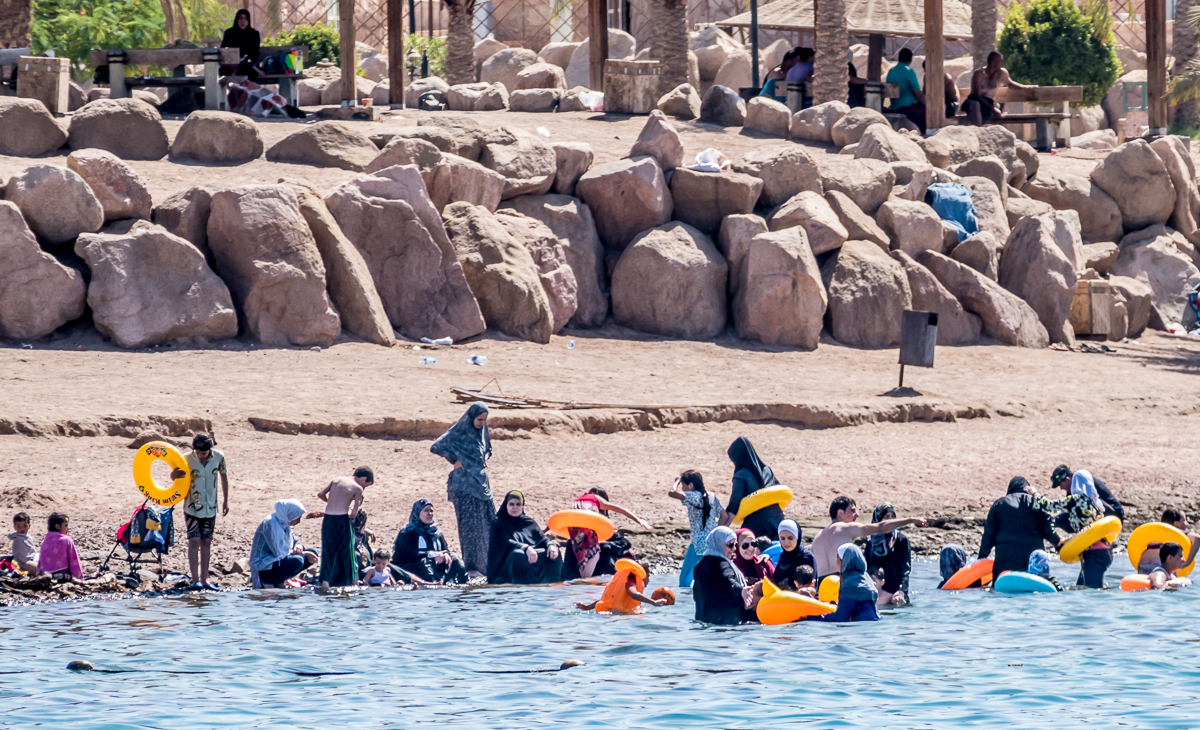 Eventually we stop. It’s a lovely lazy time on the water, with a lunch of barbequed chicken cooked right there on the boat, and fabulous snorkelling in two different places. One of the best things is watching the transformation of one of our travelling companions. She has never snorkeled before, and she starts slow and cautious and fearful. Within minutes she gets it. Her excitement and joy is infectious. We wonder if we’ll ever get her out of the water.

Returning to Aqaba Don and I spend the afternoon lazing in our hotel room, and then make our way to the local beach. Down on the pier

all the lads are climbing onto the railing and jumping into the water.

We join them. Once they realize I’m photographing them it becomes a free-for-all, each one trying to out-do the other. The ‘show off’ factor increases exponentially with the arrival of a western woman with a camera. They are loud and joyful, loving the attention. They try to make the biggest splashes possible. 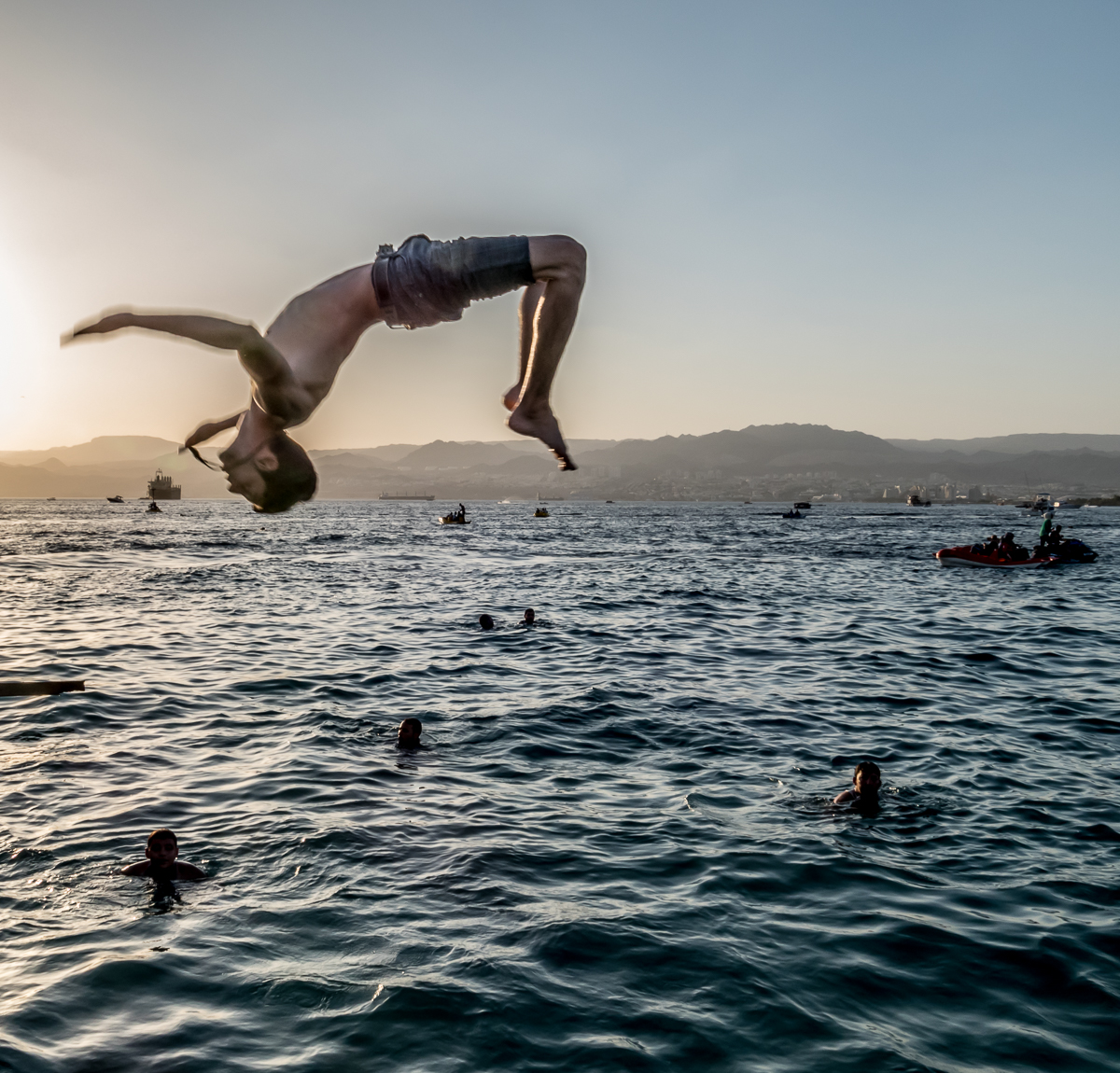 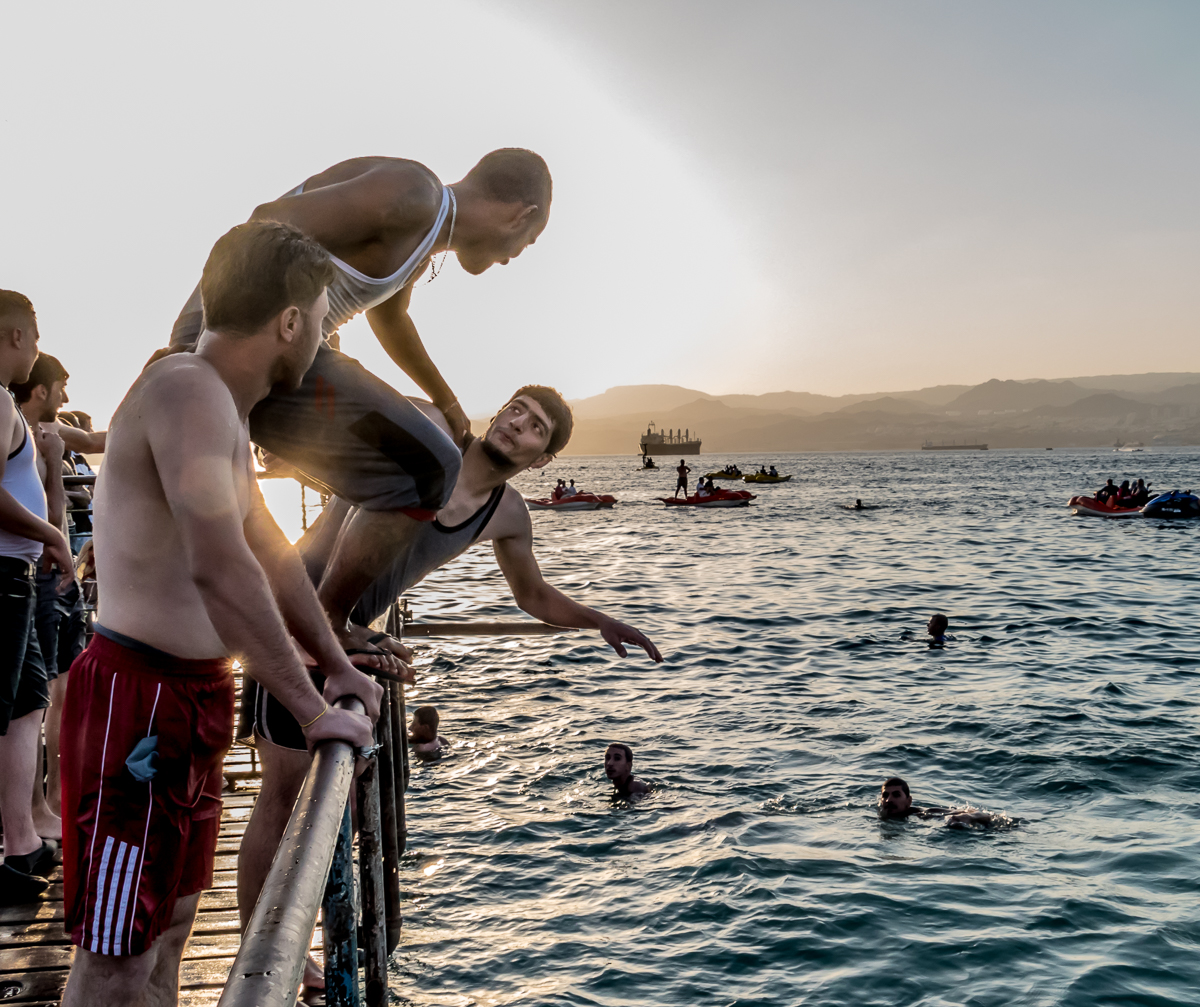 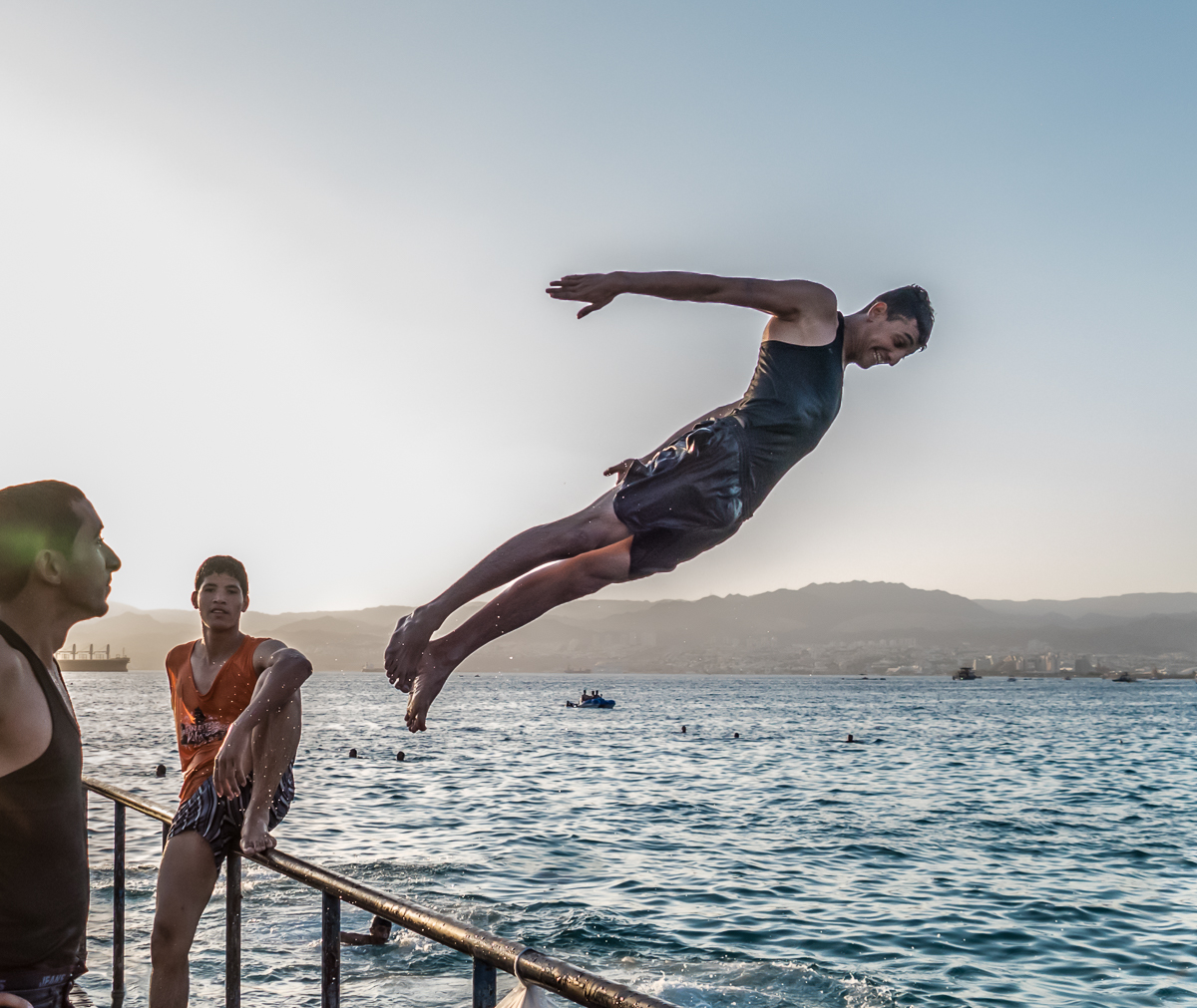 We leave wetter than when we arrived but I manage to keep my camera dry. We walk to the beach 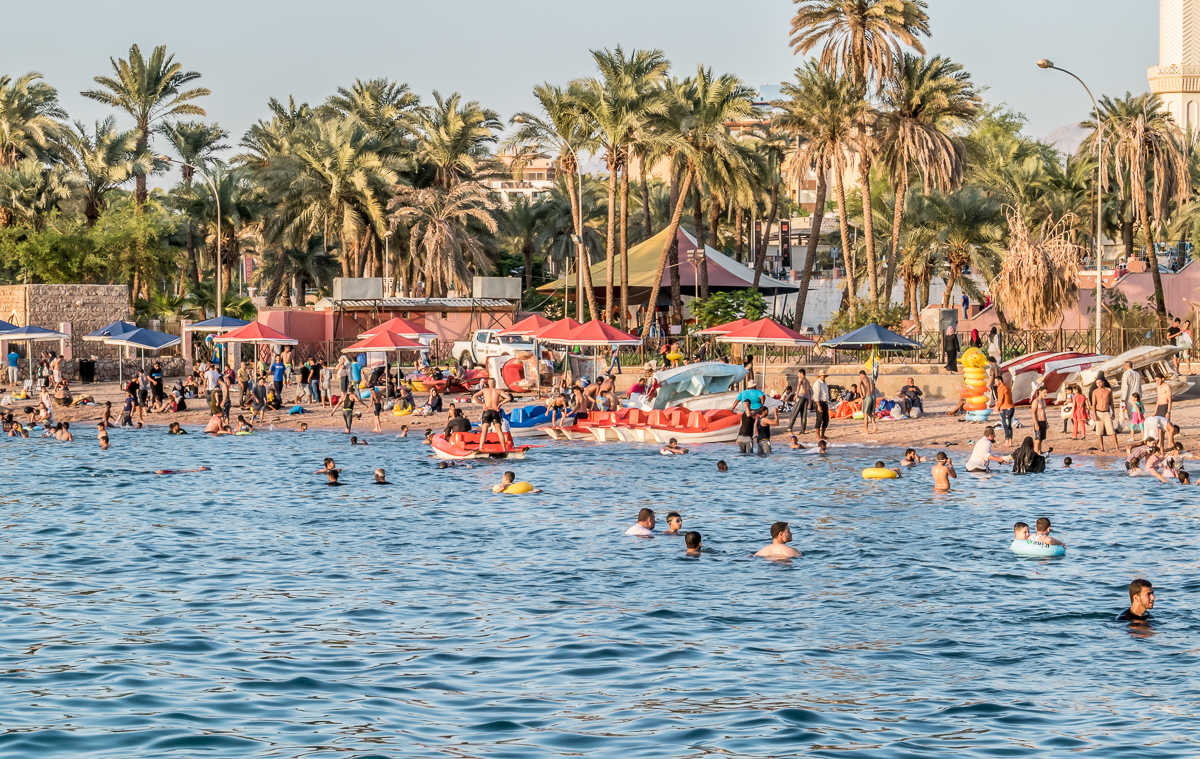 and, as the sun sets, we follow the walkway by the beach 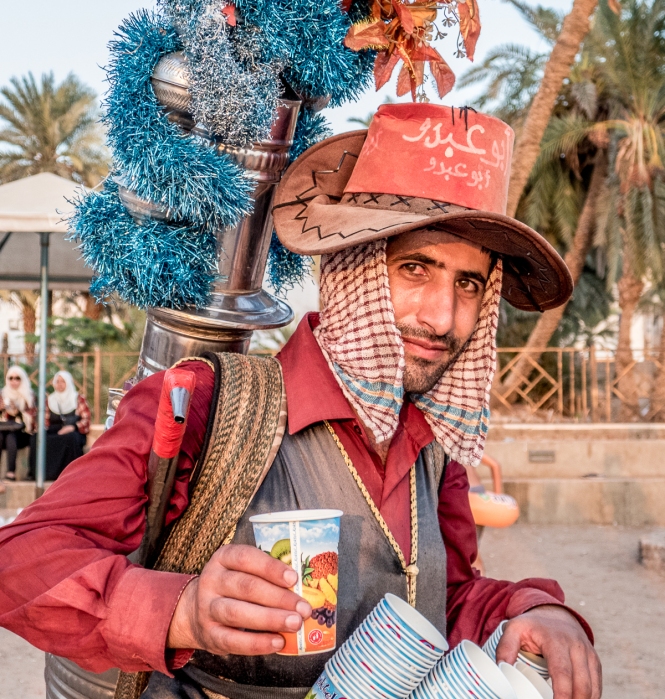 back to the hotel. It’s one of the best times in Jordan, this chance to connect with the people even if we don’t speak the language.

After a delicious fish dinner with the group our guide takes us to the small shop of a spice merchant hidden away in the souq where all manner of things are for sale, from hookahs to clothing.

The spice merchant is very funny, and for an hour or so entertains us with stories of different spices and how to use them.

I don’t remember any of it except that we laugh a lot, and at some point a man arrives to buy some spices accompanied by his beautiful daughter.

The next morning we drive all the way back north to Amman, the capital of Jordan and the starting point of our tour. After a week of travelling we have come full circle.

Our first stop in Amman is the Citadel atop one of the seven hills of the city. The site has a long history of settlement by several different civilizations, dating back to the Bronze Age. Most of the buildings are from the Roman, Ottoman, and Umayyad periods.

From the Citadel we head to the Roman theatre where I’m more interested in the people than the two thousand year old arena of semi-circular seating. 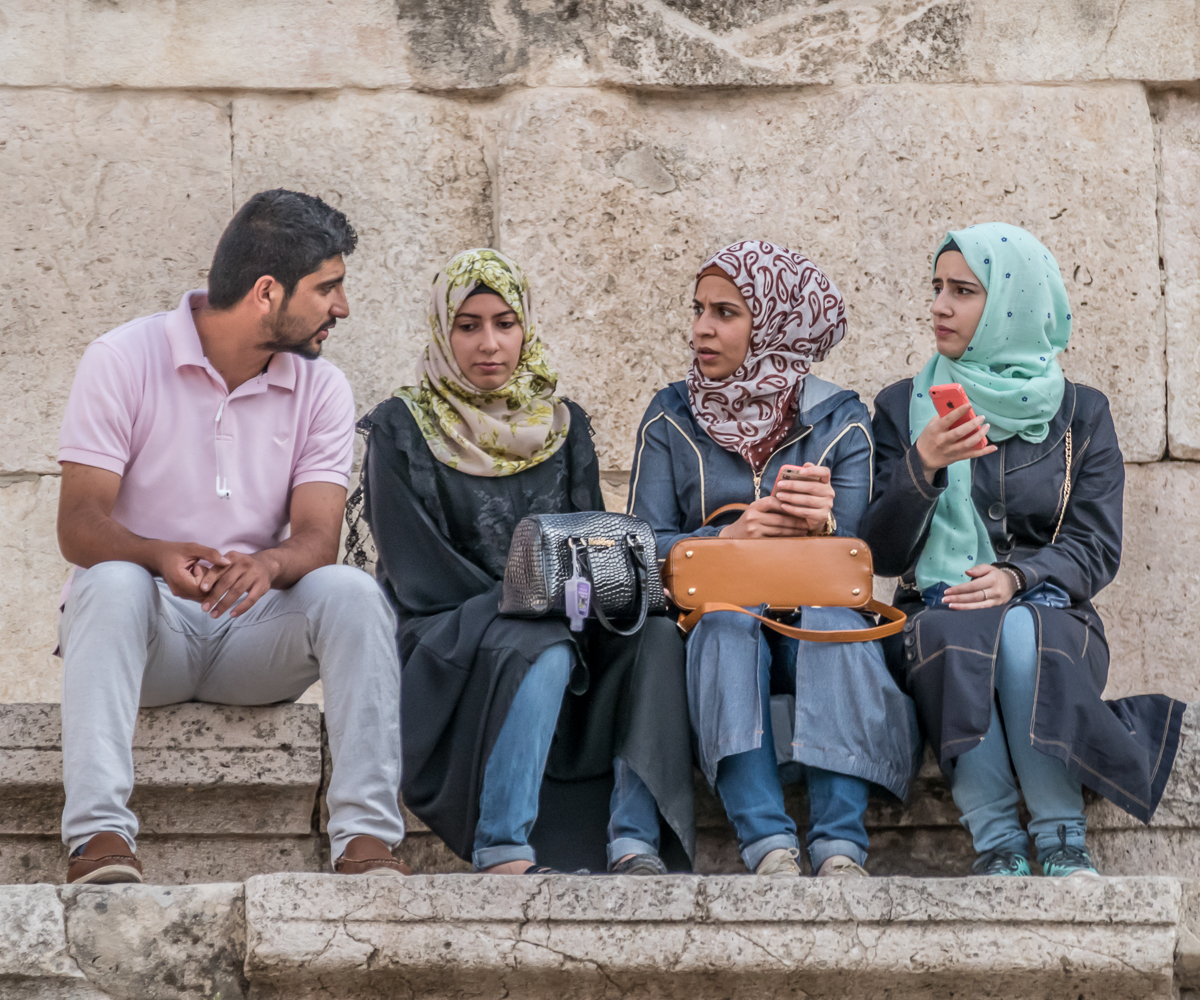 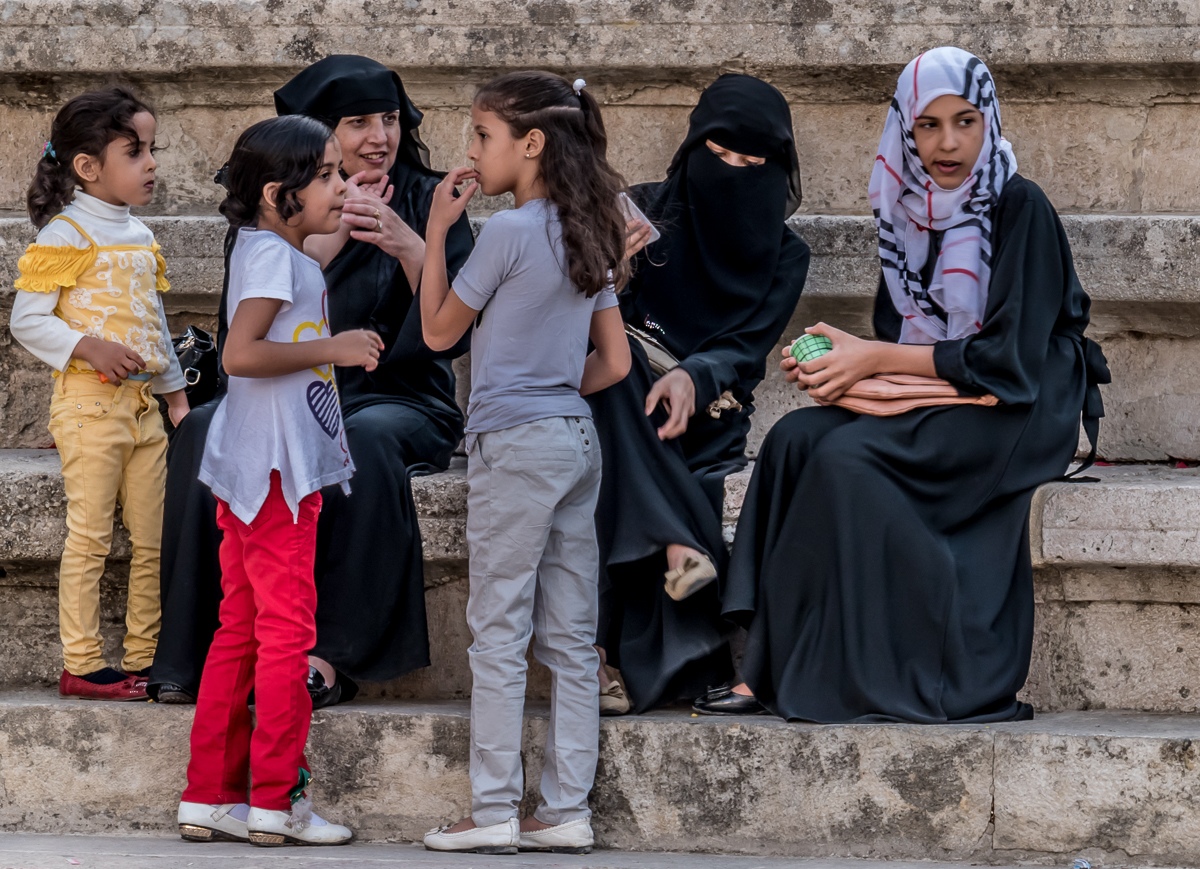 Next to the theatre is a small museum housing genuine examples of the traditional clothing of the many different tribes of Jordan. There is something fine about these garments. They breathe authenticity, woven and sewn by hand as they are, in the muted natural colours of the earth. There’s a sense that they are brimming with stories of long ago, of a tribal nomadic way of life that is largely gone.

This young woman poses in front of the display to have her picture taken by a friend. I was struck by how little has changed, except that modern dress feels more like a necessity and convenience rather than an earthy and rich way of life. Perhaps I am over-romanticizing, but I always feel a resonance with hand made articles of long ago. It’s as if their very cells radiate something true about who we are, something about the best of us as human beings. 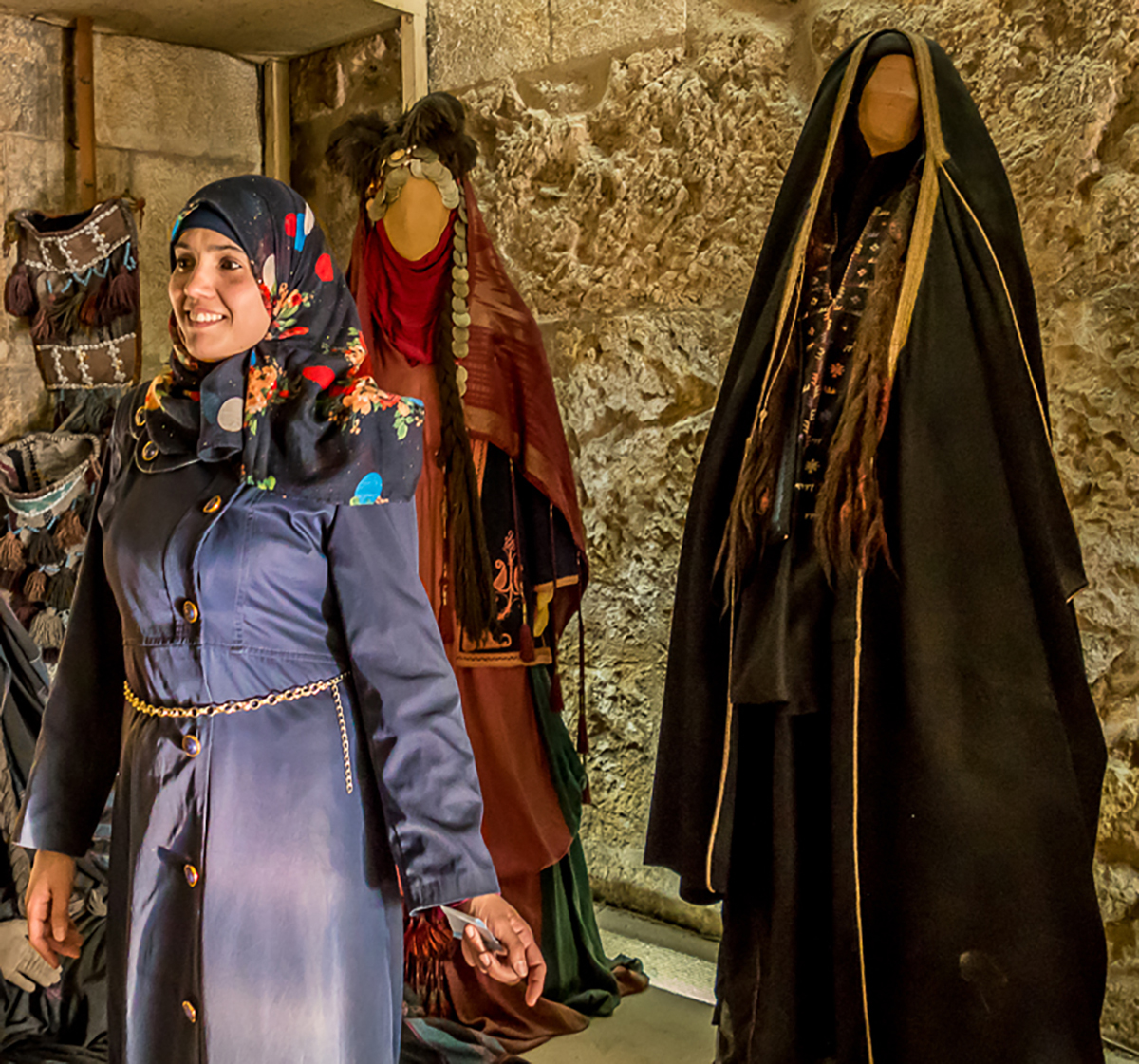 Walking on from the Roman theatre we come to the Balad, the scruffy, crowded and chaotic downtown of Amman, the old core of the city. It’s a real taste of Jordan with its labyrinth of narrow alleyways, and vendors selling everything from fruit and vegetables, clothes and spices, to souvenirs and hardware. It’s a commotion of mosques, souqs, and coffee houses all vying for attention. 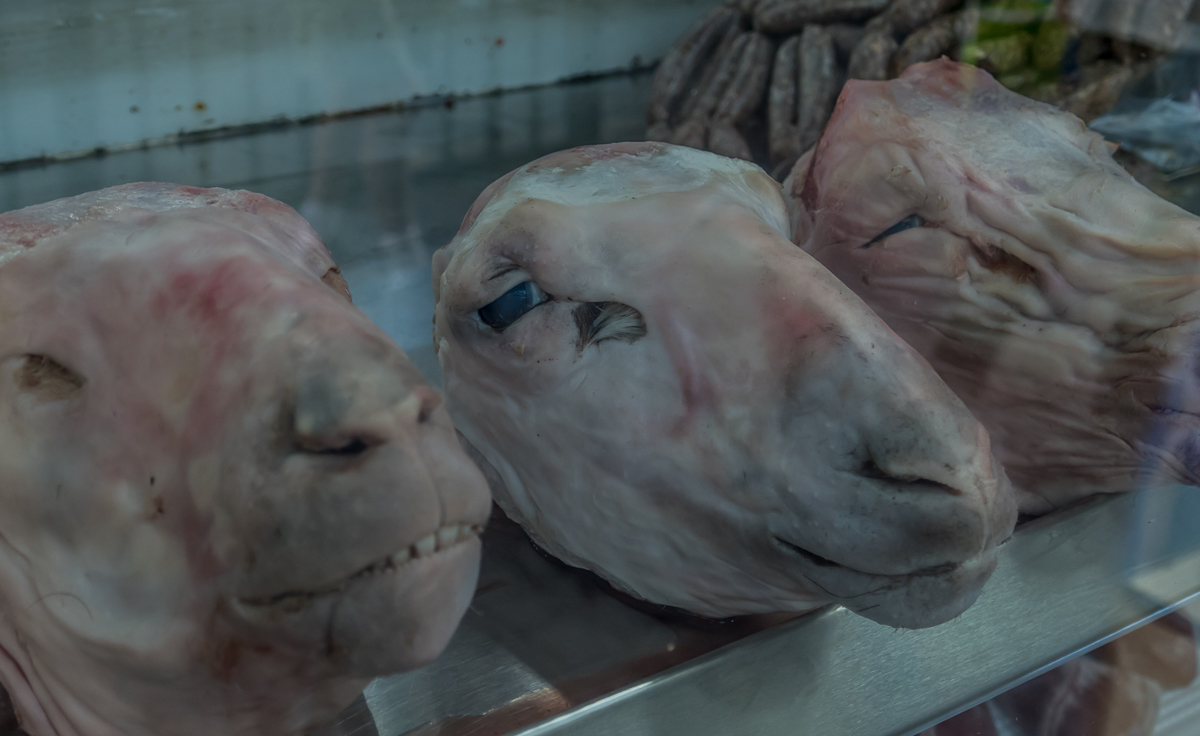 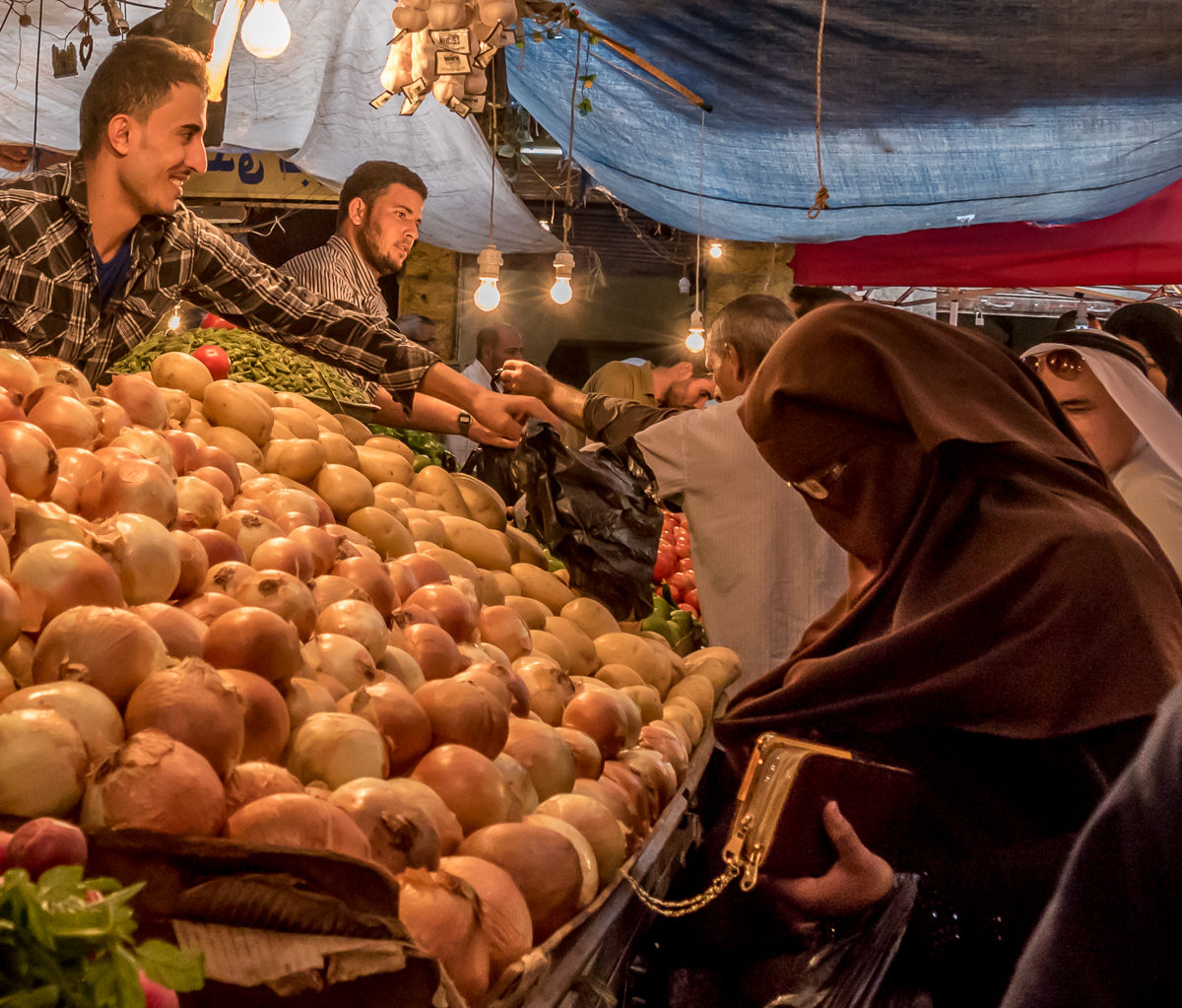 and around the corner in an alleyway we see a long line-up of people. We discover they are waiting to buy dinner at a place selling Jordan’s equivalent of fast food.

At night there is a farewell dinner with our tour group. The next day we fly to Cairo, and the day after we begin a tour of Egypt.Next post: This Nomadic Life – to tour or not to tour? That is the question.

And then: The Egyptian Museum, a four and a half thousand year old boat, and screaming like a banshee inside the Great Pyramid of Cheops.

Other posts of our trip through Jordan:

Downtown Amman: the Mosque, the Souq, and the Menagerie in the Restaurant

Jordan Highlights: Gerasa, the Dead Sea, and the Map of Madaba

Through the Window: along Jordan’s roads from Amman to the butler’s castle.

The Ancient City of Petra – half as old as time

Little Petra, and the Bedouin of Jordan

67 thoughts on “The people of Jordan: Aqaba and Amman”