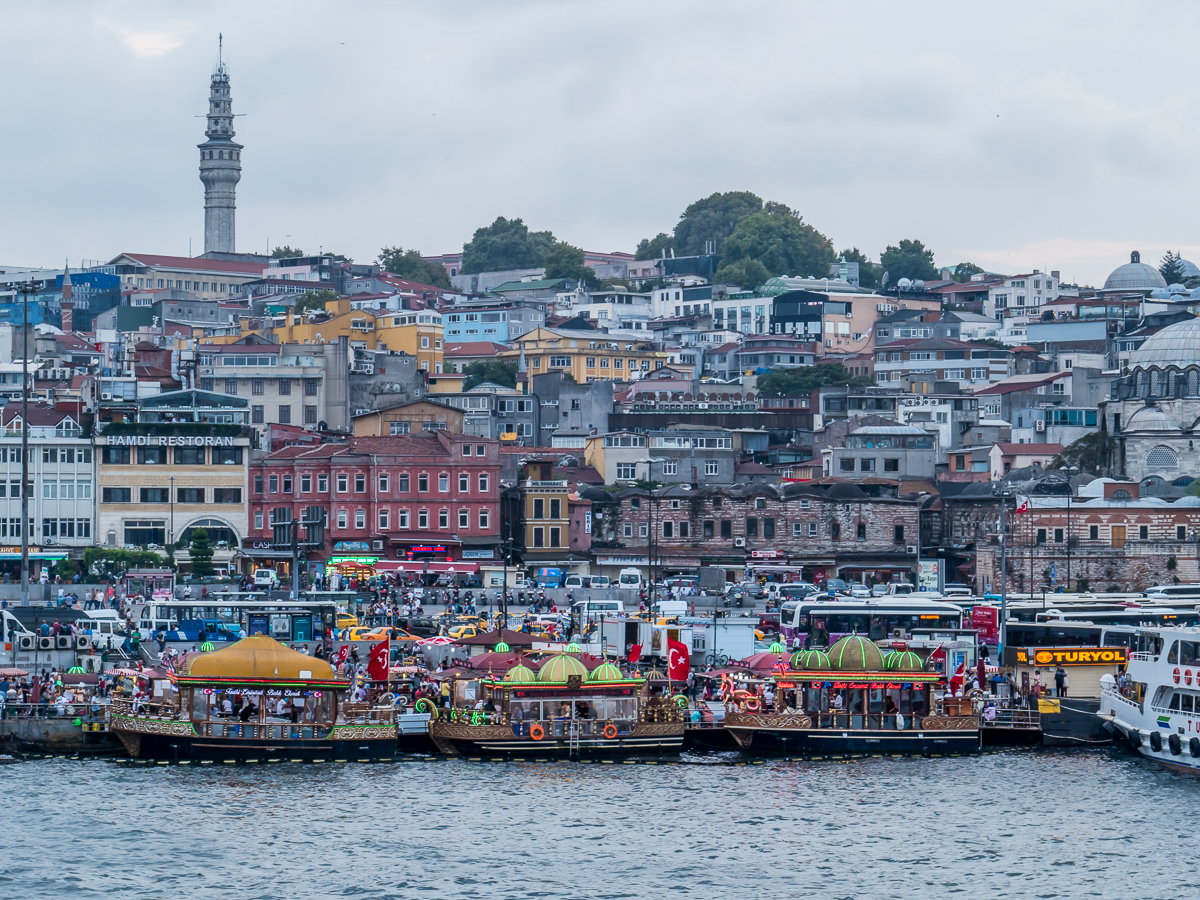 The waterfront at Eminönü from Galata Bridge

22-29 September 2015. Somewhere in Istanbul. We are far from the usual tourist haunts, walking down a narrow cobbled street. There is a group of men in the street ahead of us. As we reach them we can see they are standing outside a very large barn-like building with a dirt floor. It seems odd to find such a place in the middle of a big city. It has two enormous rolling doors, each big enough for a two-car garage. One of the doors is wide open. Inside, standing in the dirt, interspersed between the wooden support pillars topped with wooden beams and a high roof, there is livestock: maybe six or eight cows. Near the door I see with nauseating horror a cow tied to a post with its head wrapped with a bright yellow plastic bag to cover its eyes. It is the next to be slaughtered. The smell of a farmyard hangs in the air. And the smell of blood. And the smell of fear.

I know what it’s all about but hadn’t expected to be confronted with it in such an uncompromising way. It’s Kurban Bayrami. I ask, by holding up my camera, if I can take photos and am told sure, no problem. I’m about to take a few quick snaps when another man approaches and starts shouting Problem! Problem! He then rattles off a great tirade in Turkish from which I glean two words: Sultanahmet, and Ayasofya. Sultanahmet, the “Old Town”, is the main tourist area in the city. Ayasofya is the biggest tourist attraction. His meaning is clear – stay in the tourist areas. You are not welcome here. He then pulls the large sliding door closed.

We turn to leave and I notice that there are two white panel-vans on the opposite side of the street. They are parked back to back with only a few feet between them. Both have their back doors wide open. The doors meet and hide whatever is happening inside the vans. They are liberally splattered with blood.

It is Kurban Bayrami, the “holiday of sacrifice”, an annual Islamic holiday. It is like Christmas in only one respect: that Turkish families gather together. All forms of transportation are usually fully booked as people all over the country travel to be with friends and family. We had deliberately arranged our schedule to avoid being on the move during the five days of this holiday. Kurban Bayrami is also like Easter in that almost everyone has at least four days off from work, and in that it has deep religious significance. Apart from these similarities Kurban Bayrami is entirely itself. It is the most important Islamic religious festival in the year. It honours family, community, and charity.

Kurban Bayrami celebrates the Koranic story of Ibrahim’s willingness to sacrifice his son Ishmael as a sign of faithfulness and obedience to Allah. According to the story, at the last moment an angel stops Ibrahim and a lamb is sacrificed instead. Essentially the same story is told in the Bible about Abraham and his son Isaac.

To keep alive this message of obedience to Allah a tradition was born. Until not so long ago the head of each household would sacrifice a sheep or other animal, killing and butchering it in the street or in a garden. These days authorized abattoirs are located in fields at the edge of the city where trained butchers kill the animals in a sanitary manner, and cut and package the meat. There are also mobile slaughterhouses set up throughout the city. I suspect that the operation we happened upon was illegal, though possibly the two vans were a mobile slaughterhouse. We’re in the middle of a huge city; I do wonder where all those cows came from.

Friends and family are invited to a sumptuous feast, and the remaining meat, and the hide, is given to charity for the poor. Traditionally children are given new clothes and wear them throughout the days of the festival.

Earlier, we had begun our day by visiting Chora Church. It was a long tram ride with a change of lines part way through, and then a longish walk. Even after all these years of travelling we are absurdly pleased when we manage to successfully negotiate the transit system of a new city, especially one the size of Istanbul. After the tram rides, and before the walk to the church we stopped in at a nargile bar for a coffee.

A nargile is a Turkish water pipe. They have been around for centuries and are used for smoking flavoured tobacco. Originating in India they became popular in Turkey and the near east in the 1700’s at the height of the Ottoman Empire. In those days smoking with the sultan was considered the ultimate honour: reclining on a couch, enjoying a relaxing and intimate ritual with the most important person in the world. A great accomplishment. Only the most trusted would be invited. And perhaps also the most useful, for surely careful and cunning politics would have been an ever-present motivator for the sultan. Whatever the sultan’s motivation, being invited to join in the ritual of smoking a pipe with him would have been a prestigious triumph.

The popularity of nargiles faded for a while but since the 1900’s there has been a revival. We frequently saw both men and women in nargile bars all over Turkey, Jordan, and Egypt relaxing with friends in a bar, socializing and enjoying a nargile, in much the same way we would go to a bar for a drink.

The Church of the Holy Saviour Outside the Walls, in Chora, is an ancient Byzantine Greek Orthodox church that is now preserved as a museum. The interior is covered in some of the oldest remaining Byzantine mosaics and frescoes dating from the fourteenth century, making them close to seven hundred years old. Although part of the church is closed for renovations it was worth the visit to see the gorgeous golden mosaics and soaring frescoes.

One little gem from the meanings behind the designs: in the narthex the mosaics describe Mary, the Mother of Jesus, as “the container for the uncontainable”. 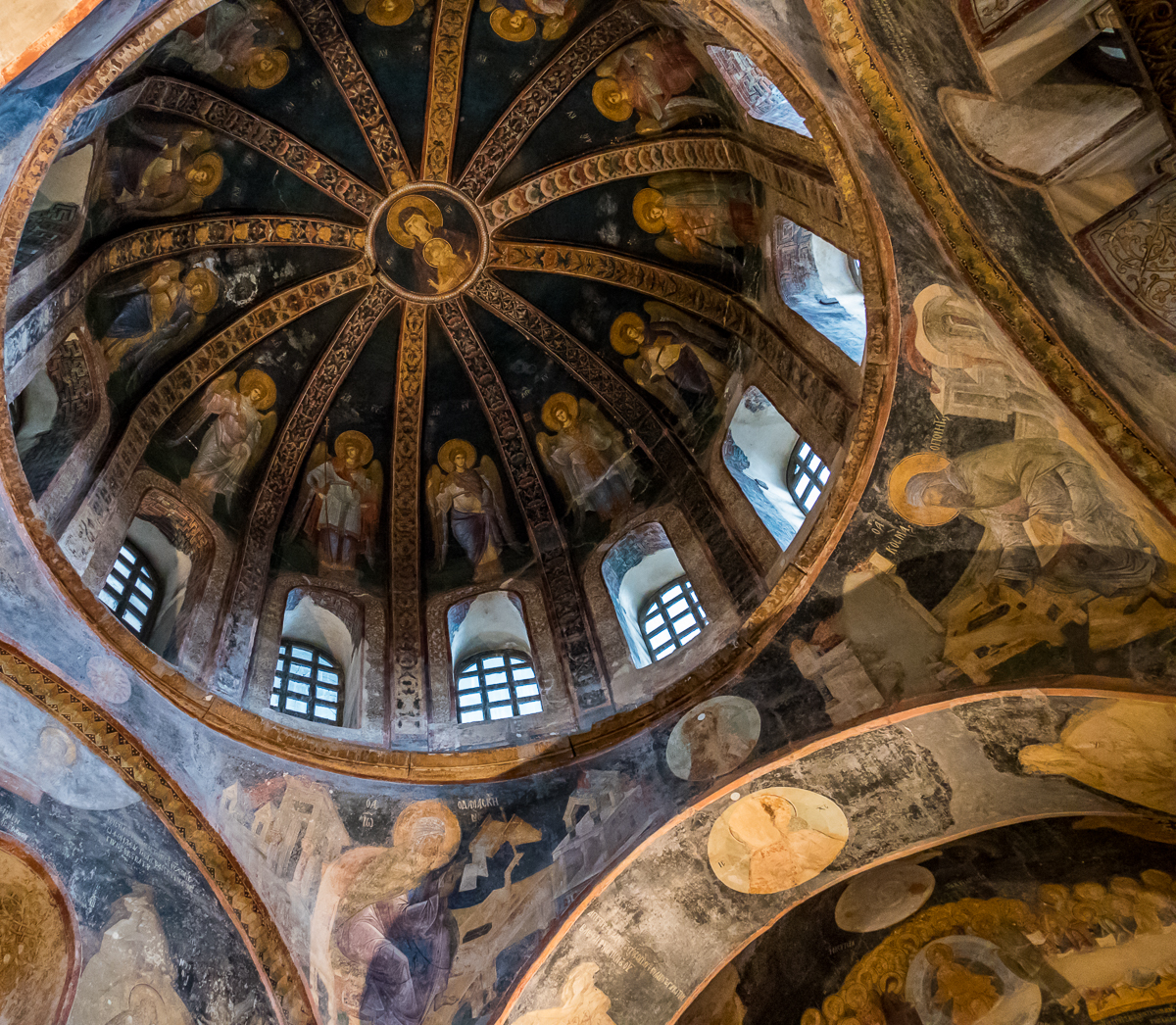 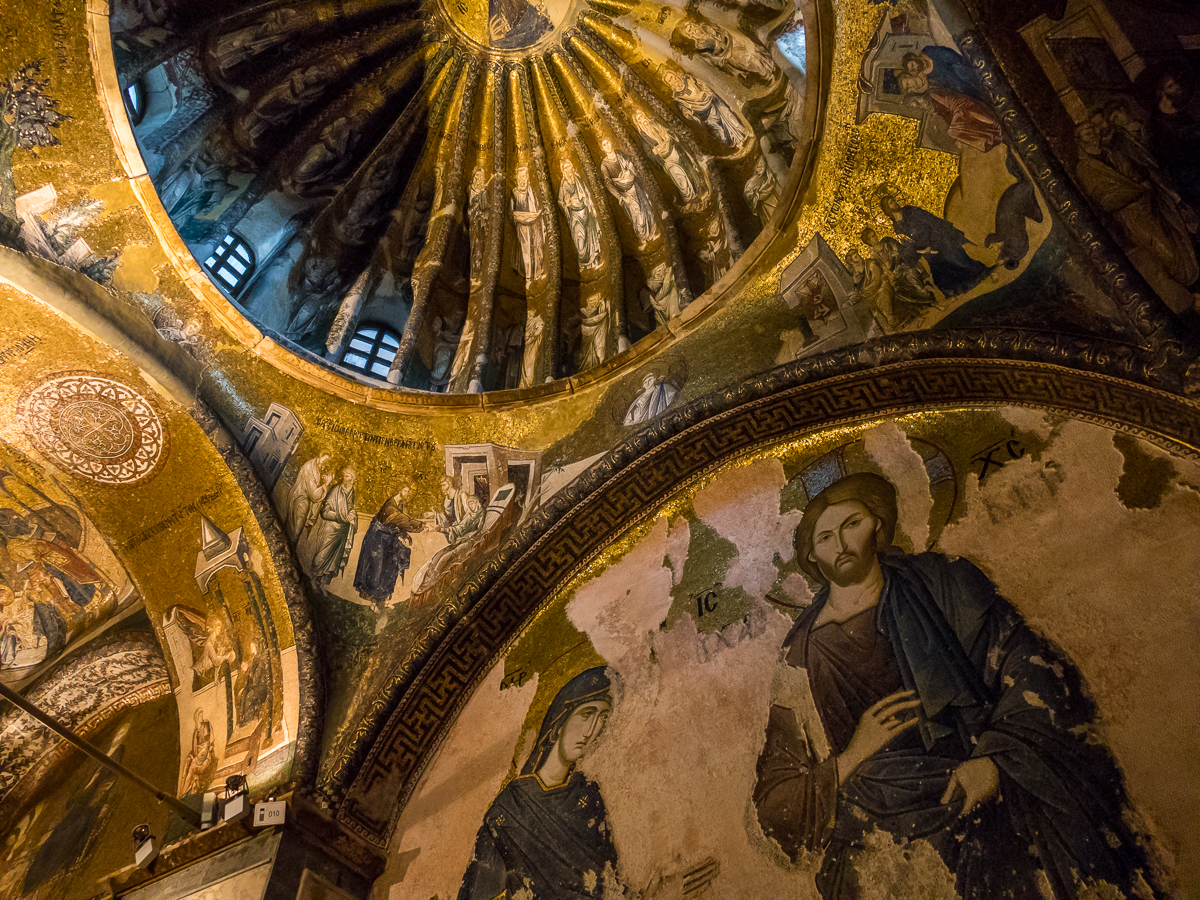 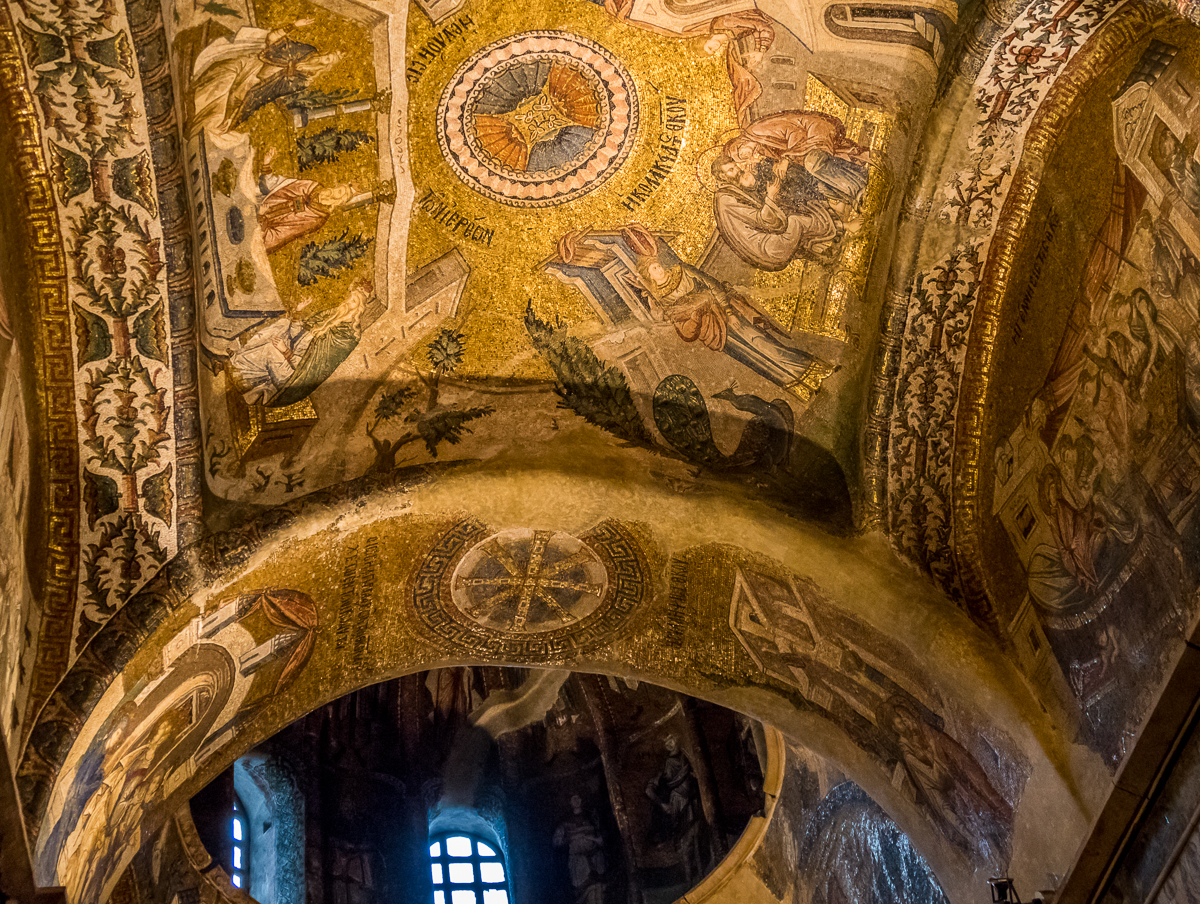 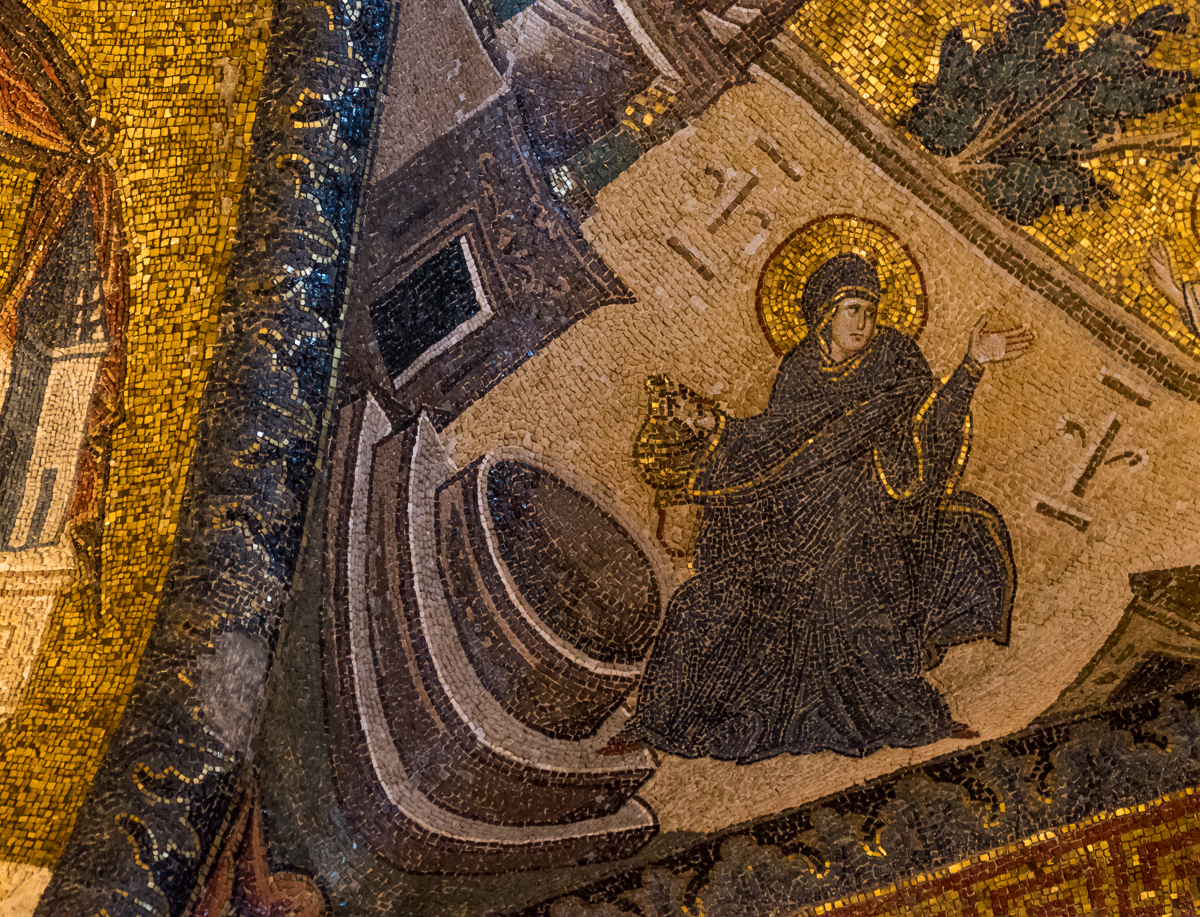 Wandering on from Chora Church we come across a courtyard filled with cats, maybe a dozen of them. This one has commandeered the best seat.

Then, with a take-out meal, we climb to the top of the old walls of the city and eat lunch up there with the view spread out before us.

As we are walking along the top of the wall we see a family in their yard below having a feast. Next to them on the ground is a large pallet covered with freshly cut raw meat. The head of the animal lies on the ground nearby. They are celebrating Kurban Bayrami. 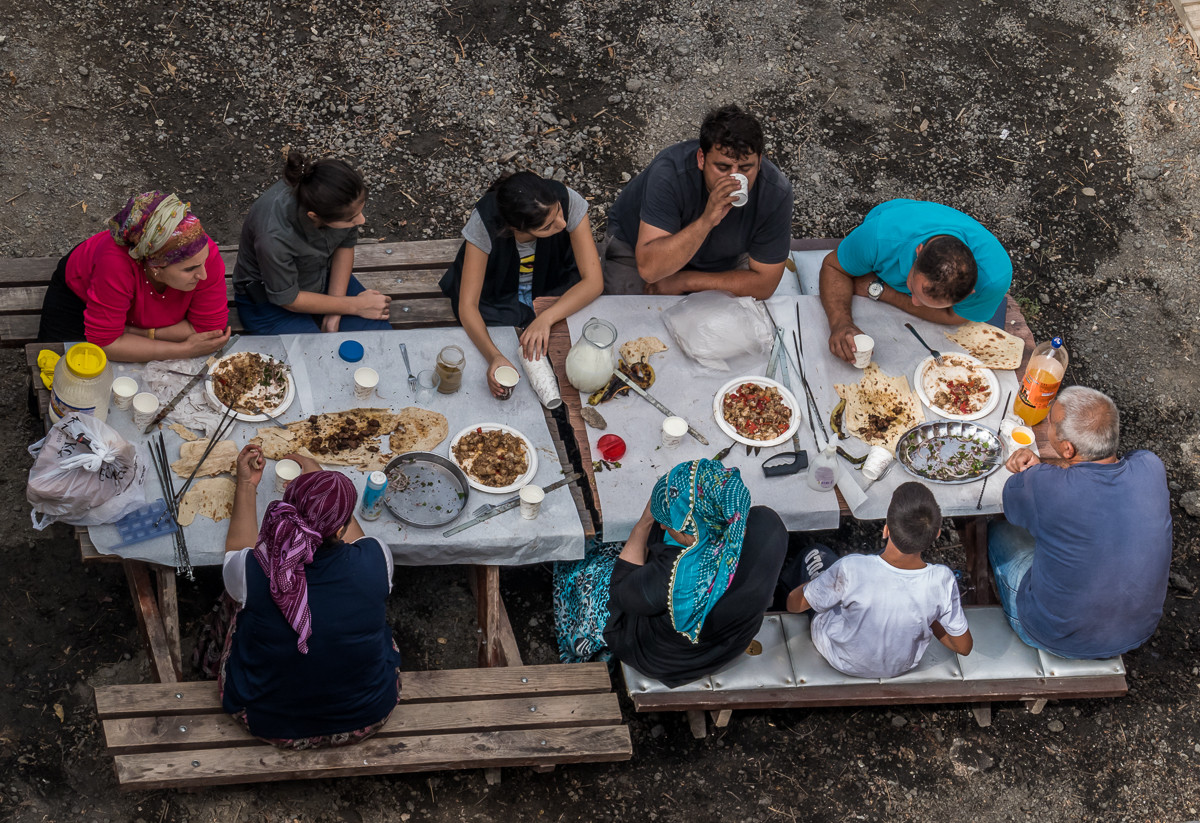 They see us and invite us to join them but we can’t figure out how to get down to them.

We climb down the stairs from the top of the wall, on the opposite side from the feasting family, and wander on down the narrow streets, unexpectedly coming across the possibly illegal slaughterhouse on the way. We are hoping to eventually find our way back to the waterfront.

We come to some lanes near the spice market. The spice market is closed for the holiday, but some of the stores in the cobbled lanes nearby are open. A strong smell of spices hangs in the air, and like hawkers the world over, the merchants shout out their bargains. 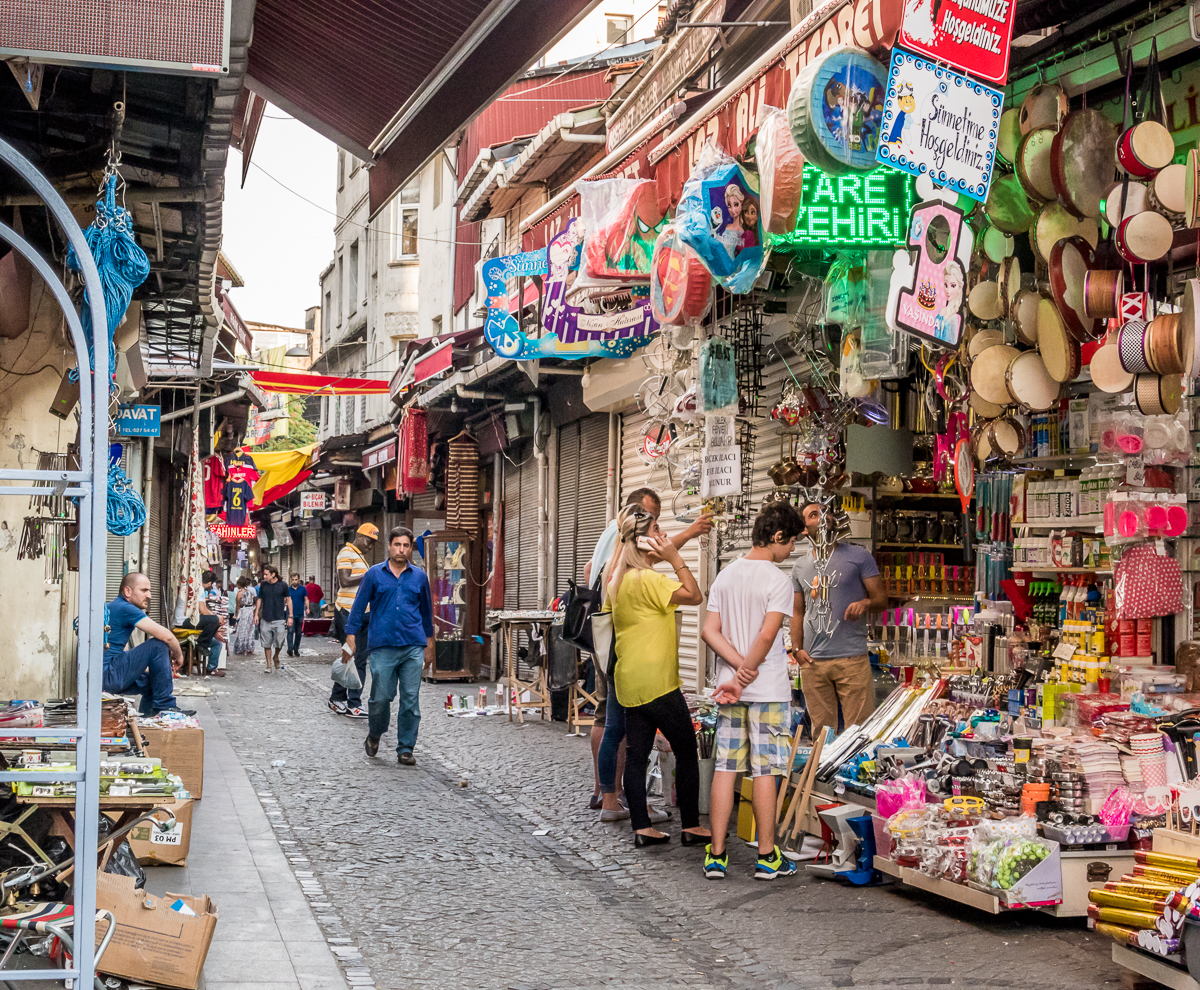 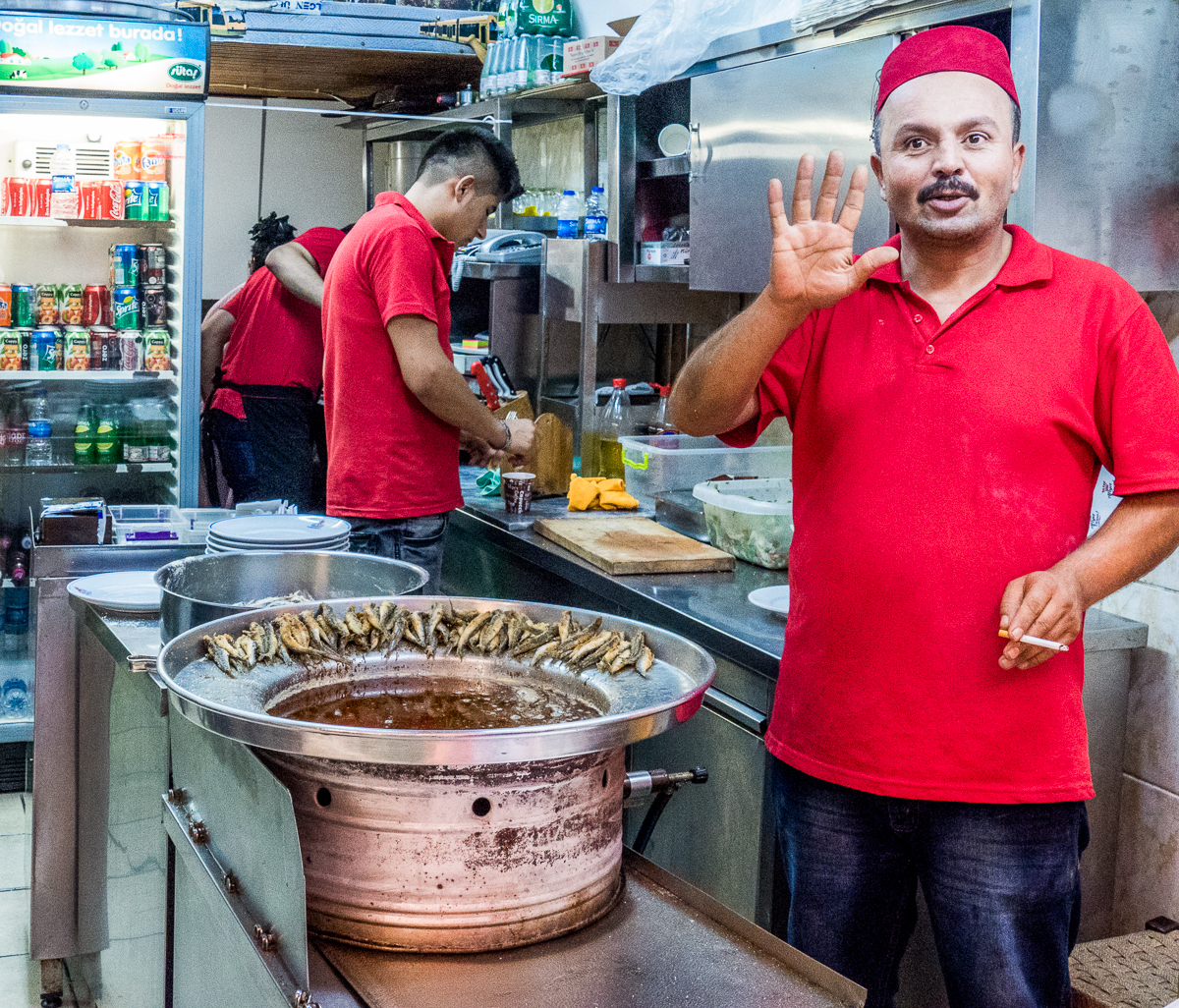 We make our way to Rüstem Pasha Mosque, close by the waterfront. It was built in the 1560’s for Rüstem Pasha, the Grand Vizier to Sultan Suleiman the Magnificent. The mosque is known for its exquisite blue Iznik tile work, and doesn’t disappoint. 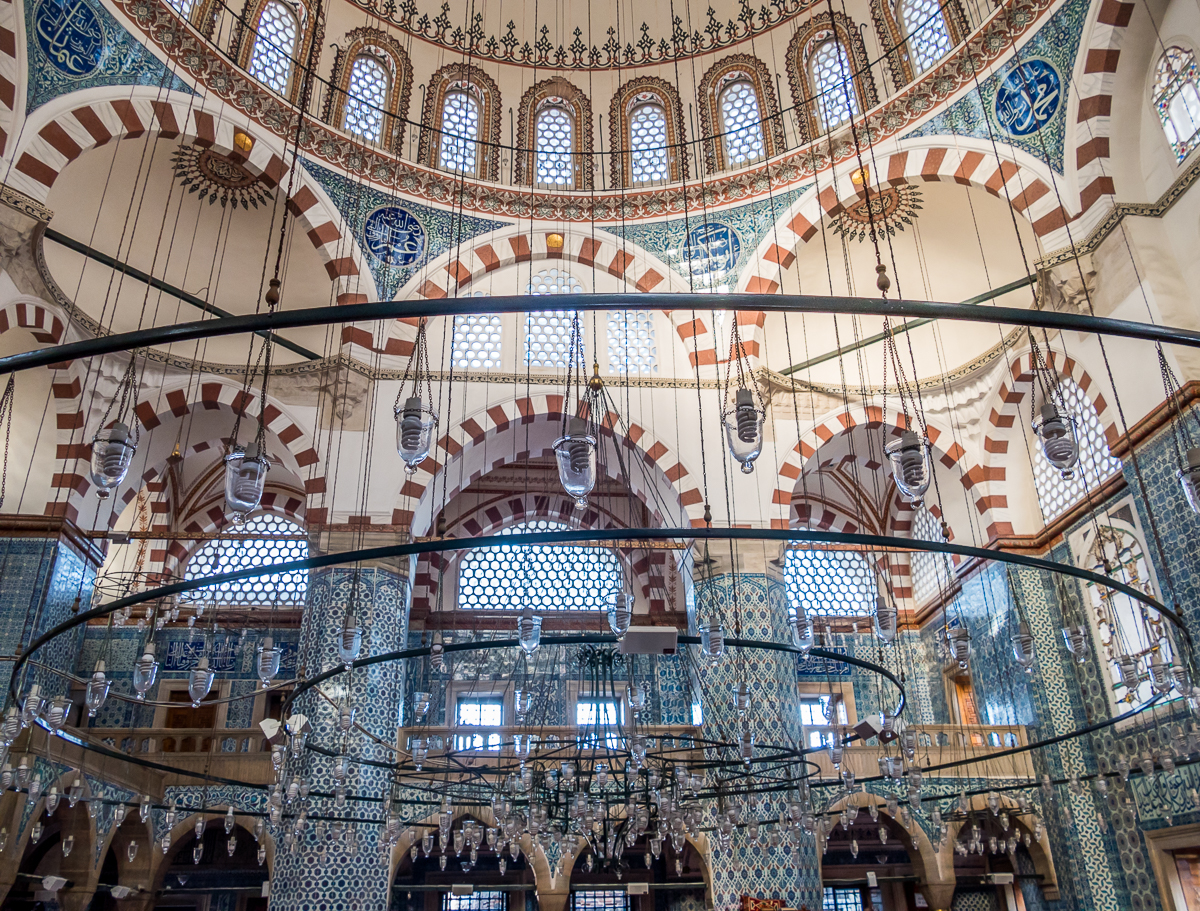 This is my favourite section of tile-work because of its free-form made-from-scraps patchwork nature, as if the artist suddenly broke free from restraint. 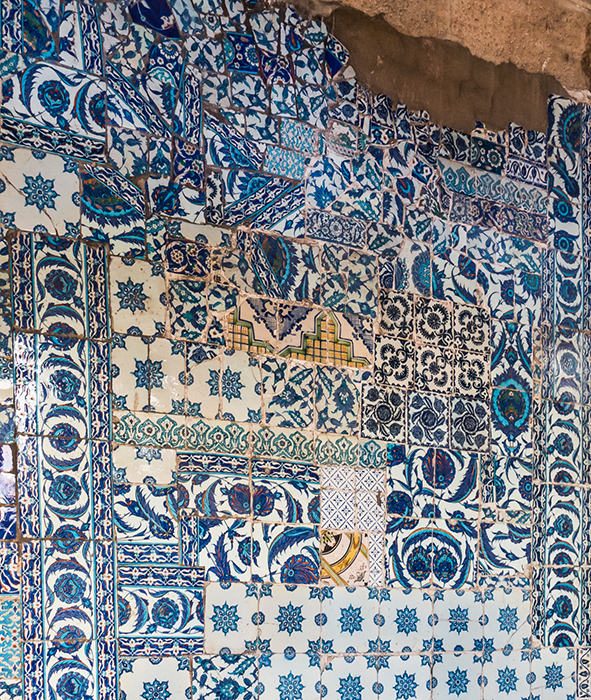 The exterior of Rüstem Pasha at night.

From the courtyard of Rüstem Pasha we can look down into this lane,

where people eat at a sidewalk restaurant. 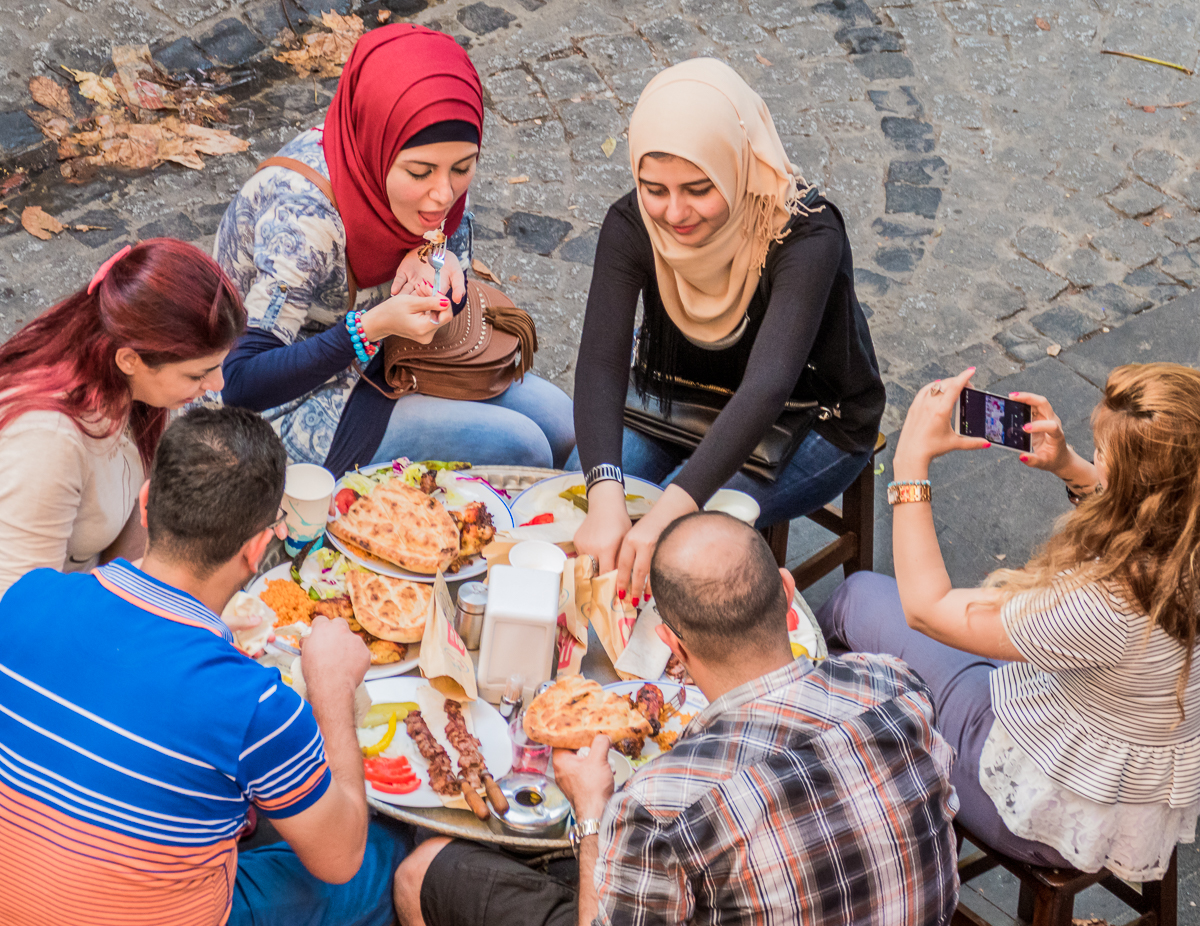 We eat there too, a couple of times, sitting on little stools in the alley as people come and go around us. It’s typical eastern Mediterranean fare – salad, pita bread, and meat skewers or chicken.

Rüstem Pasha is close by the ever-busy waterfront at Eminönü. We are there on many different occasions. It’s the place where you catch the ferries – up the Golden Horn, or along the Bosphorus, or across it to the Asian side of Istanbul. We went to the Asian side one day and found out why no one bothers. It’s unremarkable.

From the waterfront you can wander over Galata Bridge, or hang out on the bridge at sunset and watch the fishermen. The lower deck of Galata Bridge is crowded with restaurants, and along the water there are floating restaurants with neon lights, serving Turkish-style fast food. And there’s a great open space to hang out and watch all the activity, especially during Kurban Bayrami when it’s crowded and everyone is on holiday. Day or night there is always something to see.

Like the ladies selling seeds to feed the pigeons, and the kids playing with them, 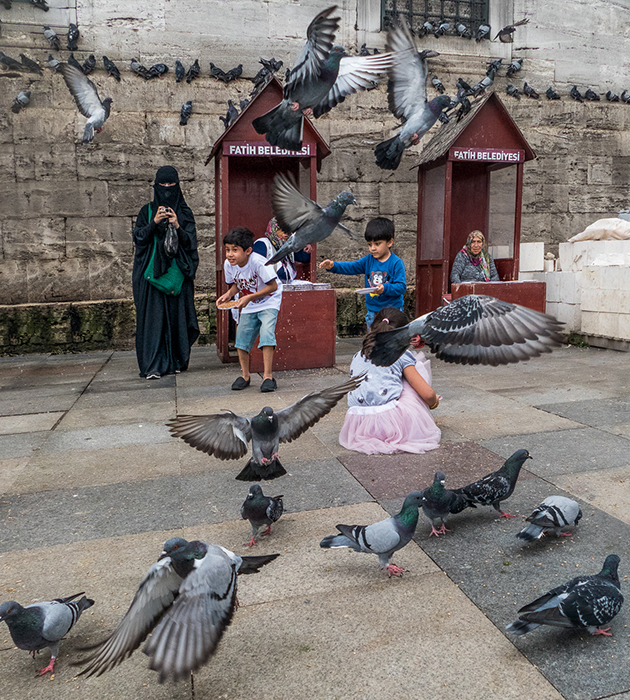 creating an explosion of birds. 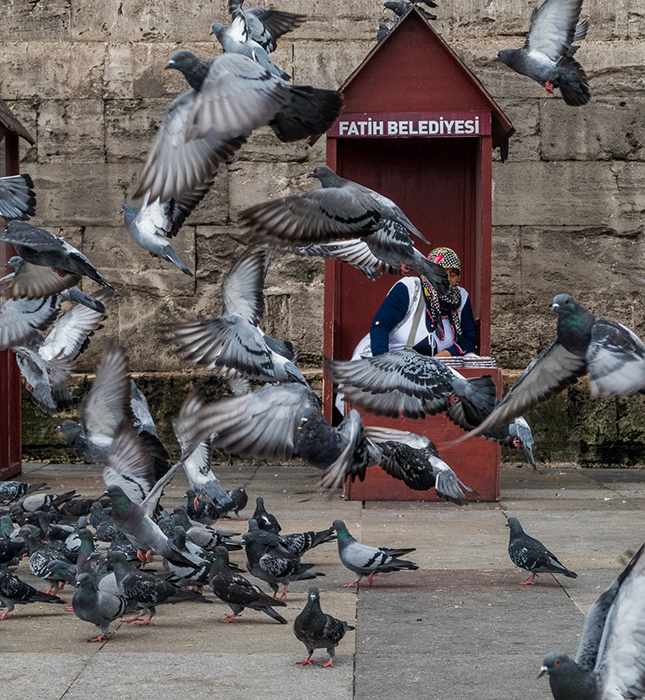 Like hawkers selling everything from prayer beads, to Turkish flags, to leeches. 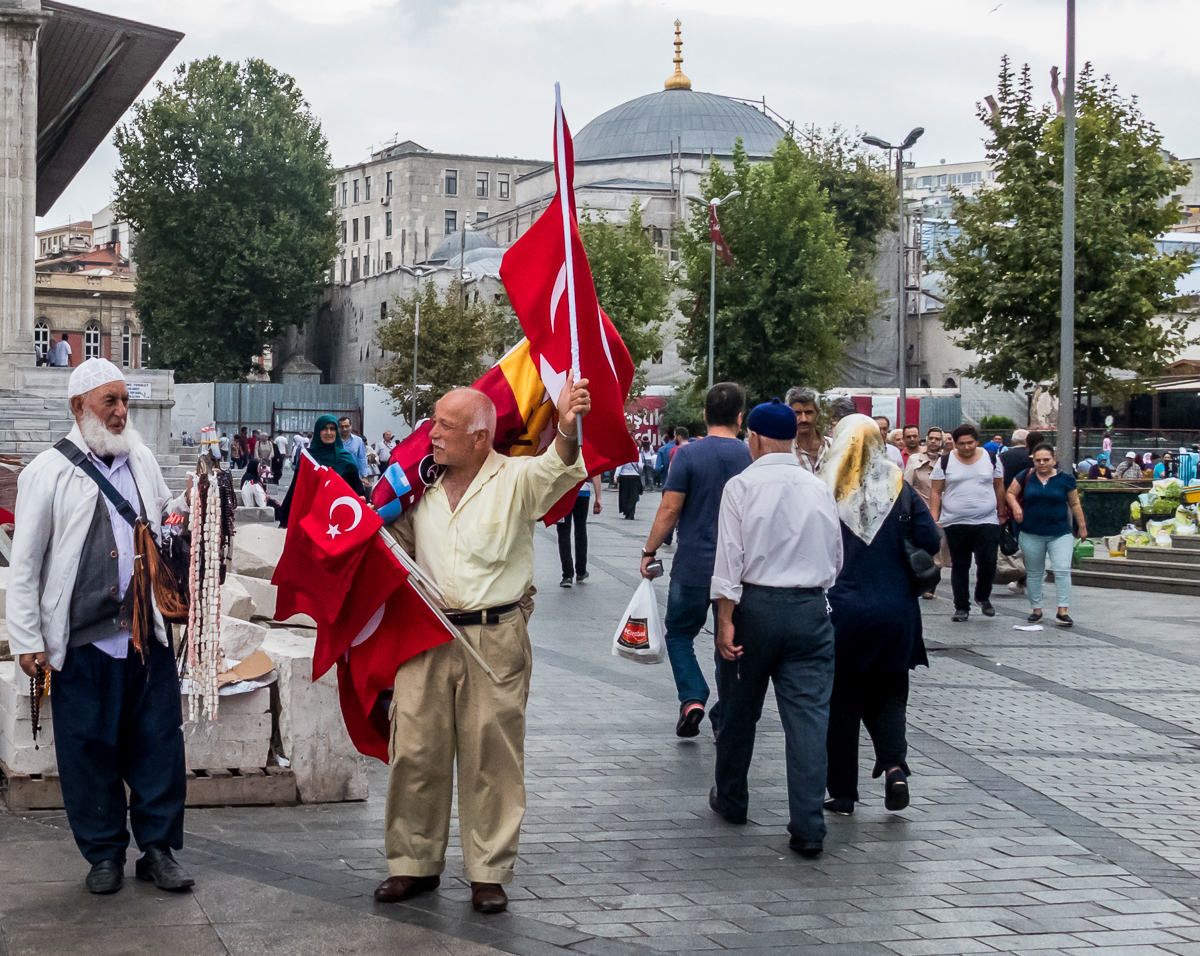 Like this group, full of vacation camaraderie and a sense of freedom over the holiday weekend.

Like this unexpected grouping: a man, a woman, and a tourist. 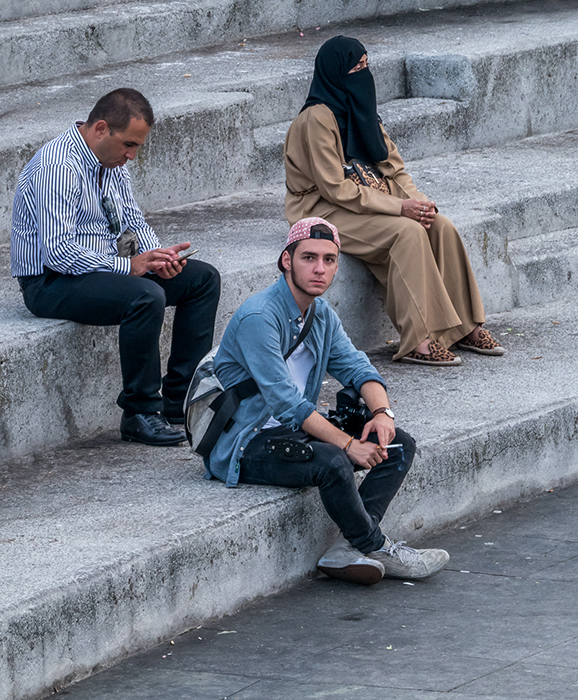 Like these boys with their family waiting in the crowd for the ferry. 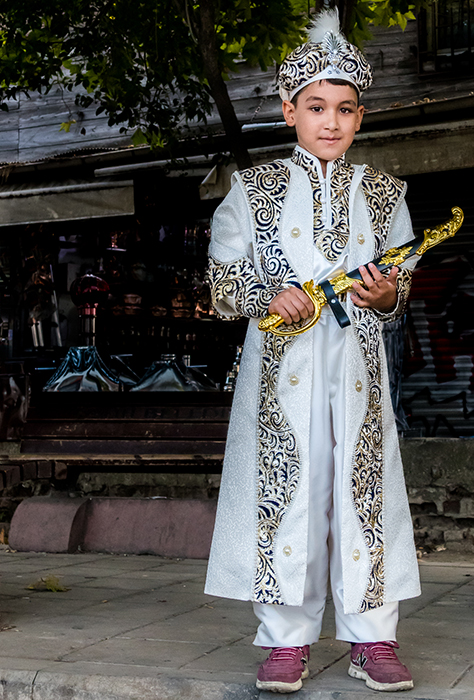 and his sister. I was determined that he, with his fancy outfit, was not going to get all the attention so I turned my camera to her and was rewarded with shy surprise.

And at night – the hordes hanging out on a holiday weekend,

and a view of Galata Tower.

61 thoughts on “A Mosque, Some Mosaics, and a Whole Lot of Raw Meat: the streets of Istanbul”