22-25 Feb 2015. The house is on a hill. The garden slopes down in front of it and rises up behind it, but we can see nothing from street level. Passing this artist as we approach,

we walk up some stairs, pay the entrance fee at a small ticket booth, and step into the garden. My jaw drops. I am immediately enchanted.

In front of me is a black tiled grand piano sitting in the middle of the garden. It is named Sweet Patooti and there is music coming from it. The lid of it is raised and the underside of the lid is a mirror. The inside is filled with flowering cactus plants that are reflected in the mirror. There’s also a couple of ceramic dancing figures in front of the cactus plants. A yellow tiled piano stool sits before the piano. . . . . . . and this is just the beginning.

Beyond the piano, on the perimeter of the garden is a band. A larger-than-life whimsical band with a bass player, a couple of dancing girls and a trumpet-playing black cat. The name of the band is Kitty Catch-Me and the Rolling Dice. The black cat’s name is Kitty. The girls dance but perhaps they are also trumpeters, though their trumpets emerge from their heads. They are about seven feet tall, and all prancing colours and tile brightness. 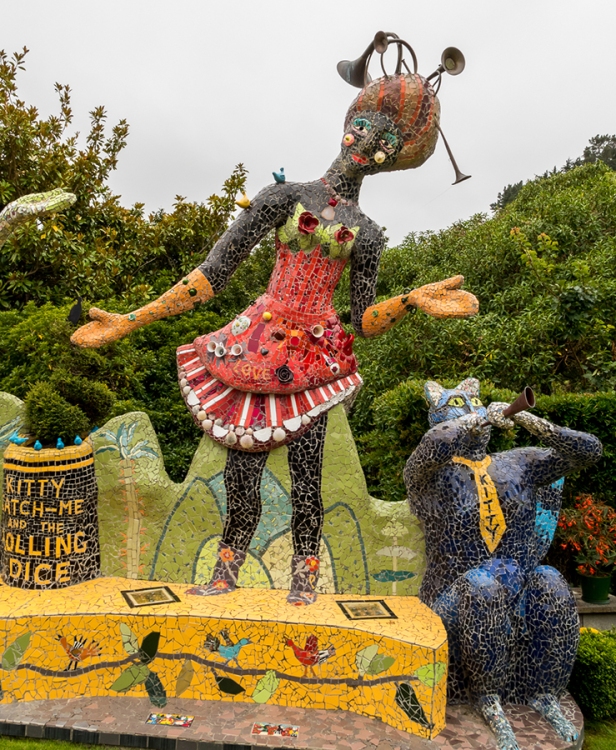 Beyond Kitty Catch-Me and the Rolling Dice, and beyond the grand piano is a garden unlike anything I’ve seen before.

It’s a garden, yes, with trees and shrubs, topiary and beautiful flowers but it’s a garden inhabited and ruled over by a bewildering and unfailingly optimistic array of huge brightly coloured fanciful figures. I don’t know which way to look first. It feels as if I can’t see it quickly enough, as if I can’t take it all in. I’m smiling with delight as I move rapidly from one group of inhabitants to the next, and then stop and stare, utterly astounded by what I’m looking at. It’s charming, creative, humorous, and playful. At the same time it is a most serious outpouring from a gifted and inspired artist. I am looking at, and trying to take in, a masterwork that just happens to be a large group of huge tiled figures spread throughout a hillside garden, the entire piece designed and created by one person. It is breathtaking in its scope.

As we wander ever upwards, along tiled staircases and pathways, each one unique,

we encounter giant butterflies, a playhouse called The Bonbon Palace, clowns balancing a blue flying human bug, acrobats, an octopus, an elephant, a giraffe, kiwis, a smartly dressed couple with duck heads, an equally smartly dressed fox, a woman balanced as though swimming on the head of a huge seated green duck, many unusual people, 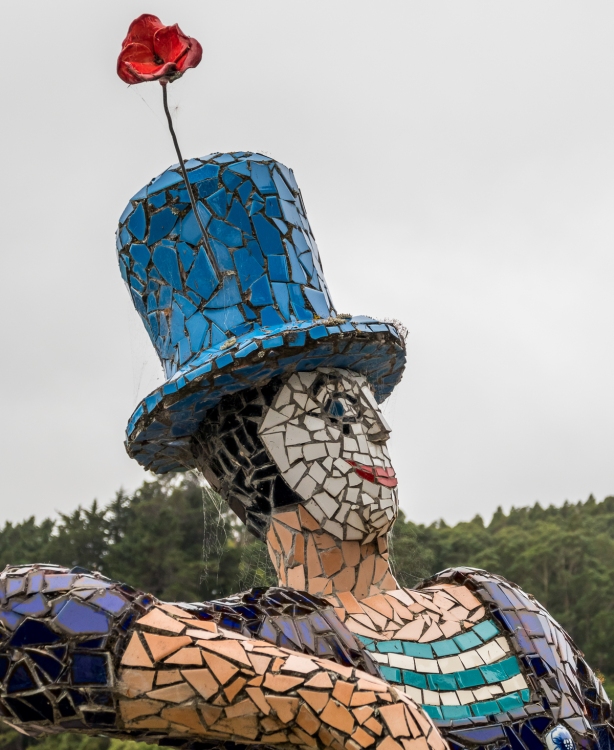 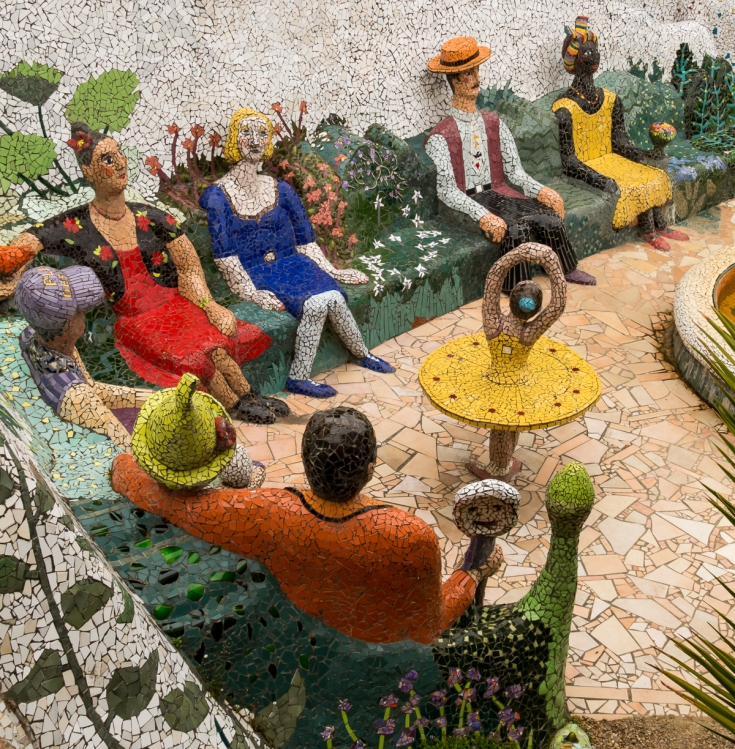 a whole new take on Adam and Eve with watermelon hats,

an angel playing footsie with a hierophant, 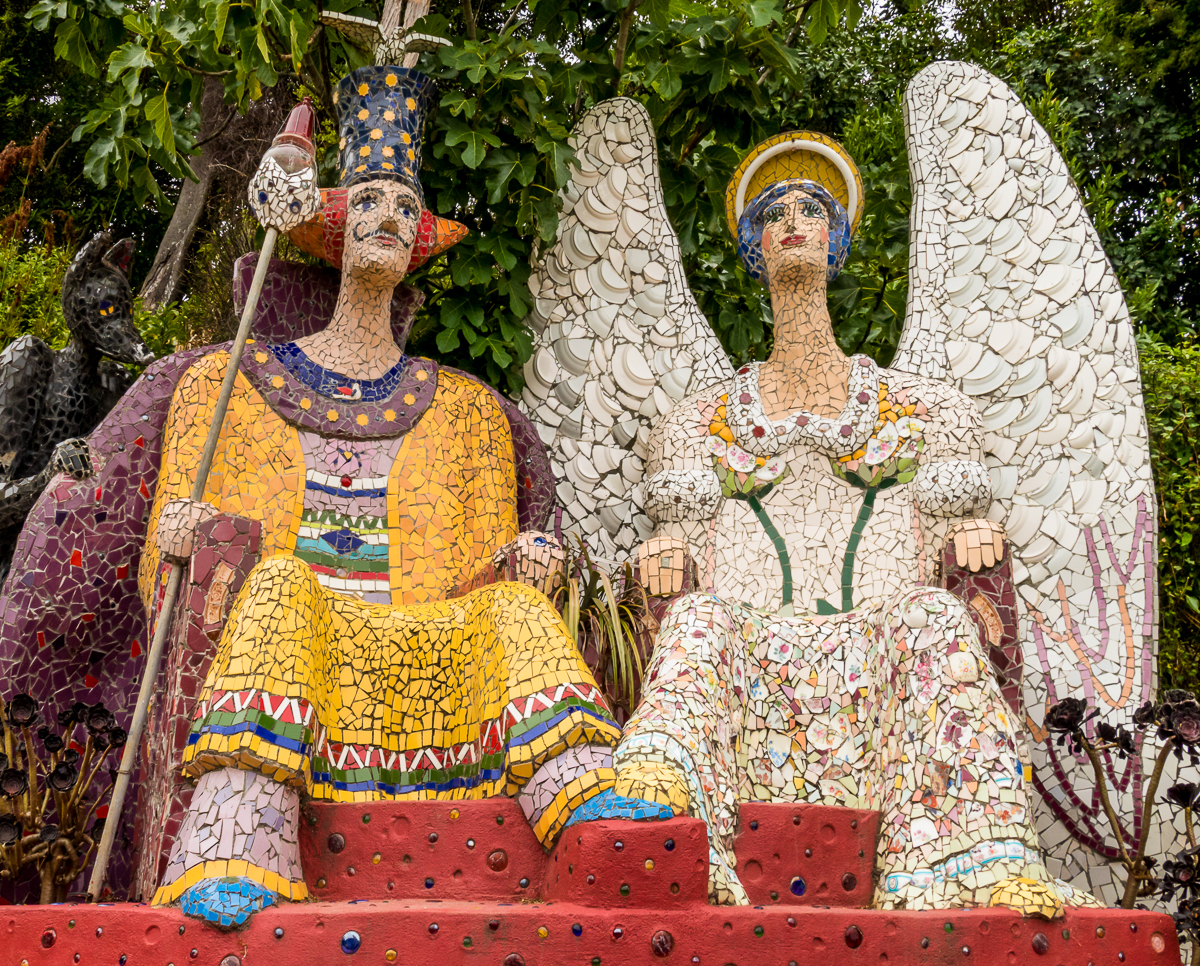 and right at the top dozens of yellow hands reaching for the sky above a sitting
area giving a view of the whole garden. 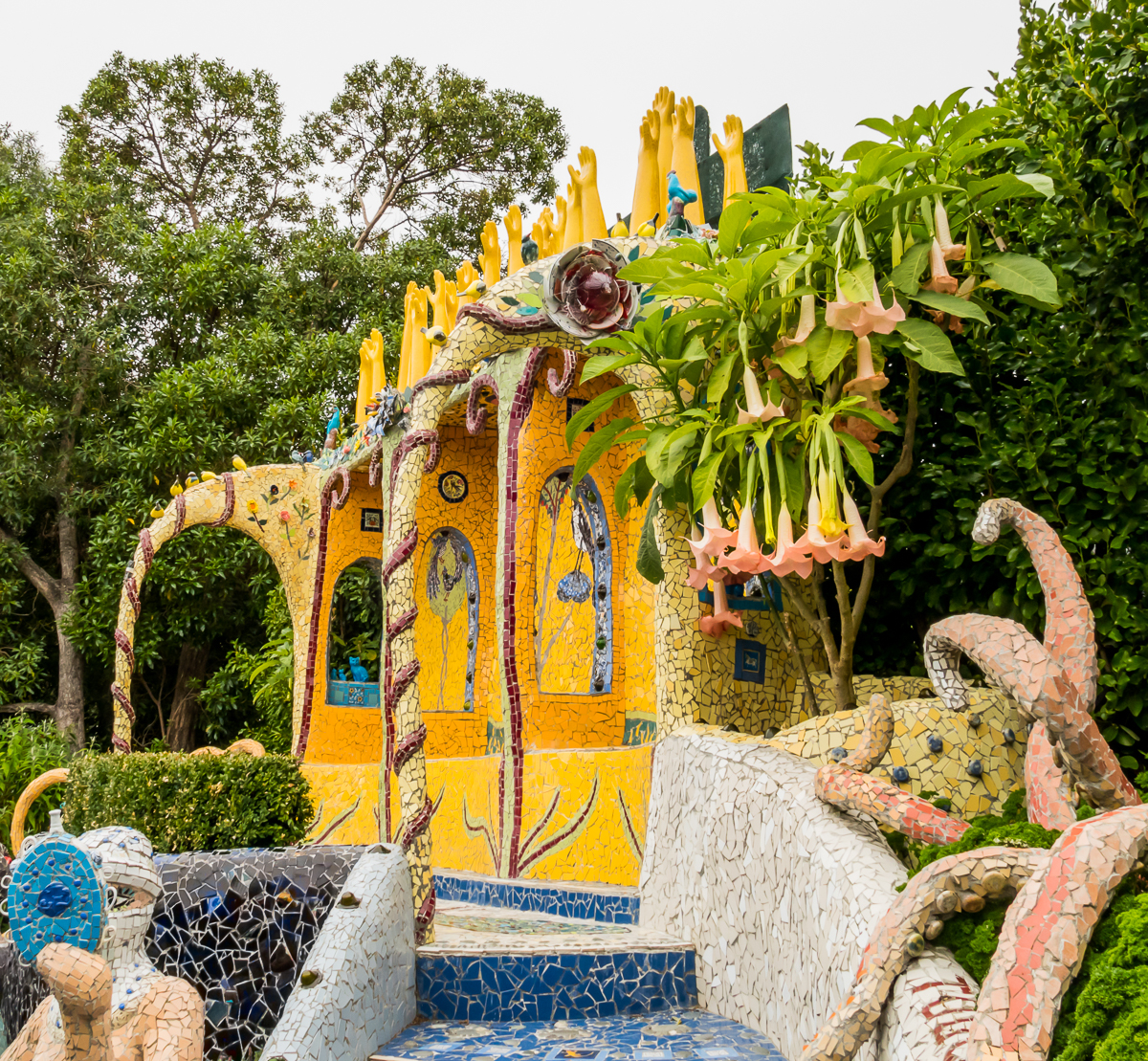 At every level there is something new to see. 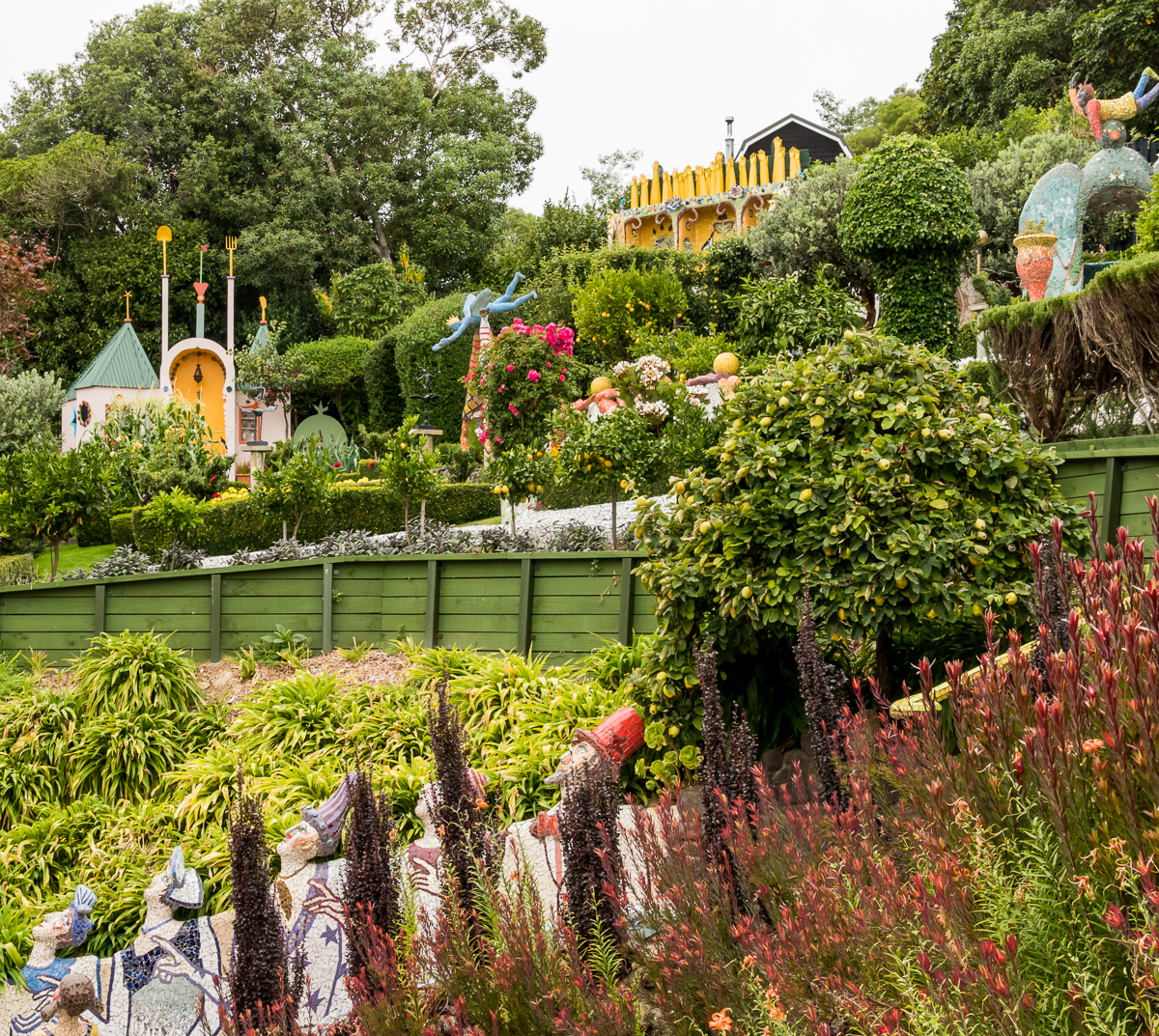 The entire place is astonishing and I am completely enthralled. It is so surreal! It is so eccentric!

A long long time ago a small child looked up from the valley below at a house on a hill and declared it must be a giant’s house since it was so big. Thus, the house, built for a bank manager in 1881, became known as The Giant’s House. The current owner, Josie Martin, trained in both horticulture and art, first moved into the house twenty years ago. There was no garden so she began with a blank canvas, first laying out the garden and then after five years beginning the tile work. The tile work evolved organically when she found shards of old china while digging in the earth. She thought them too beautiful to discard and used them to mosaic the front step area, then she tiled the conservatory floor, then she began her first tiled sculptural installation, and so it went. Fifteen years later the garden of The Giant’s House is there in all its spectacular glory. I hesitate to call it finished. One never knows what Josie will do next. This is an example of her more recent work

I’d read about The Giant’s House, and it was on our list of things to see, but I’d
forgotten about it, so it was sheer serendipity that the hike we chose during our
excursion to Banks Peninsula took us past it.

Banks Peninsula, a short drive from Christchurch, was formed by the ancient violent eruptions of two volcanoes. The almost circular coastline of the peninsula is an intricate lacework of inlets, small bays, and fishing villages. 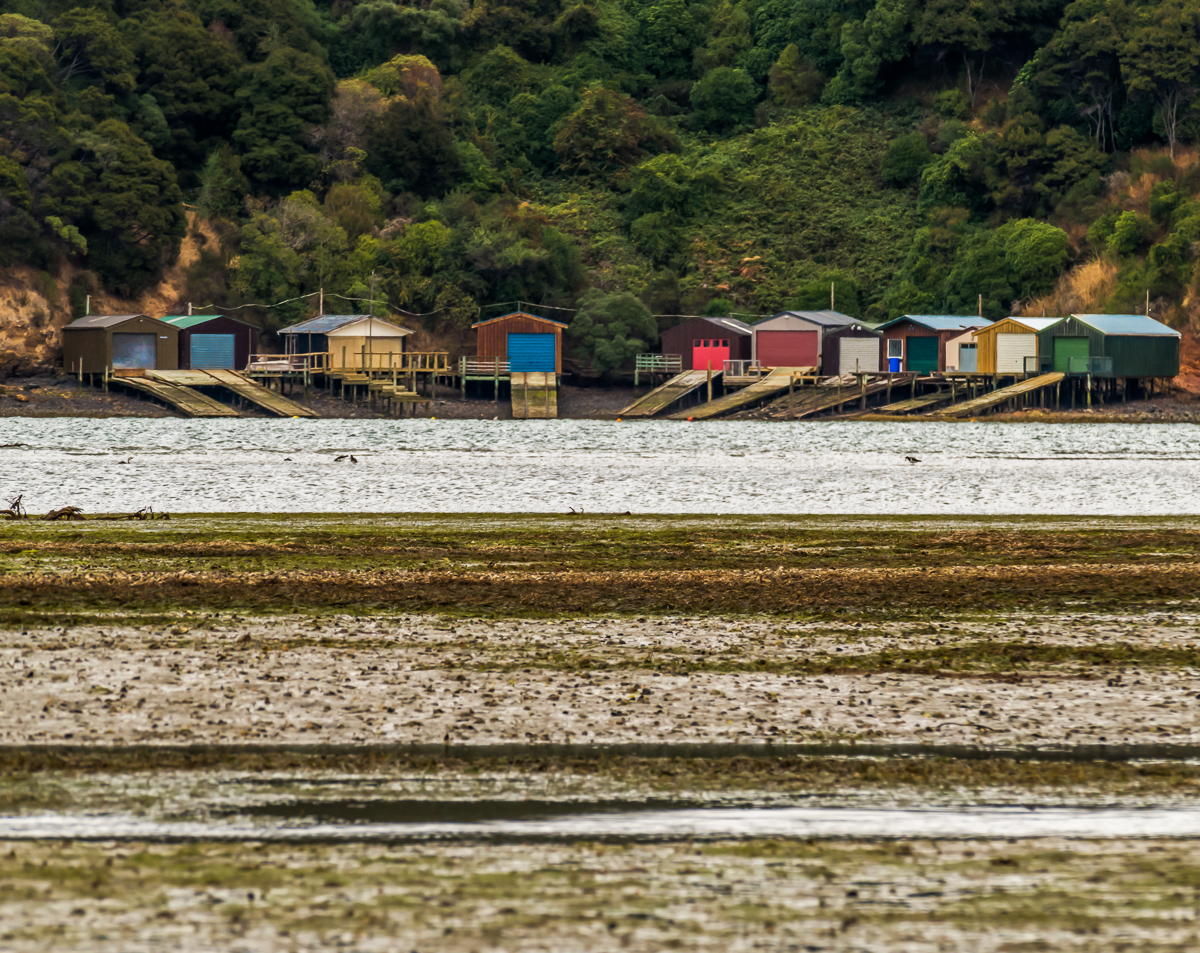 From the delightful village of Akaroa 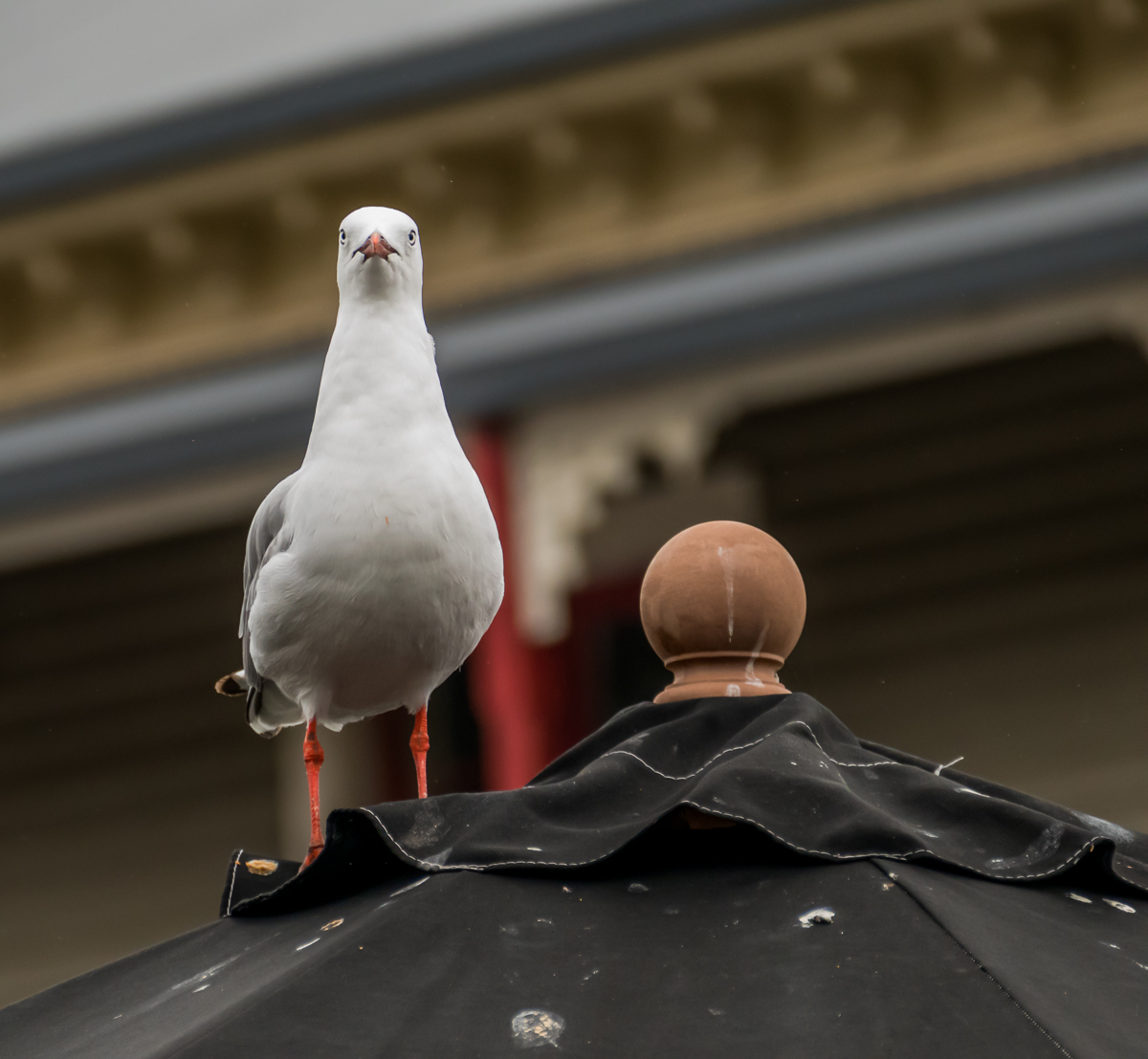 we hiked up above the town stopping at The Giant’s House then passing charming cottages, dark forests of twisted trees, and farmland.

From Christchurch we drove to Queenstown. It would have made more sense to go to Dunedin first but our initial couple of days in New Zealand revealed two important things. Even though it was late February and the antipodean school holidays were long over, tourism in New Zealand was not quiet. We commented on how busy the car rental place was when we picked up the car, and said that we thought it would be quieter because the school holidays were over. The reply was “That’s what everyone thinks”. We realised we had to start forming an itinerary, and make some bookings, fast.

The other thing that affected our choice of direction was a determination to get to the famed but notoriously rainy Milford Sound on a sunny day. A quick look at the weather forecast showed us that our best chance in the upcoming two weeks would be ‘the day after tomorrow’. So after three days in Christchurch we headed to Queenstown, the gateway to Milford, stopping frequently to take in the beauty of the scenery along the way. 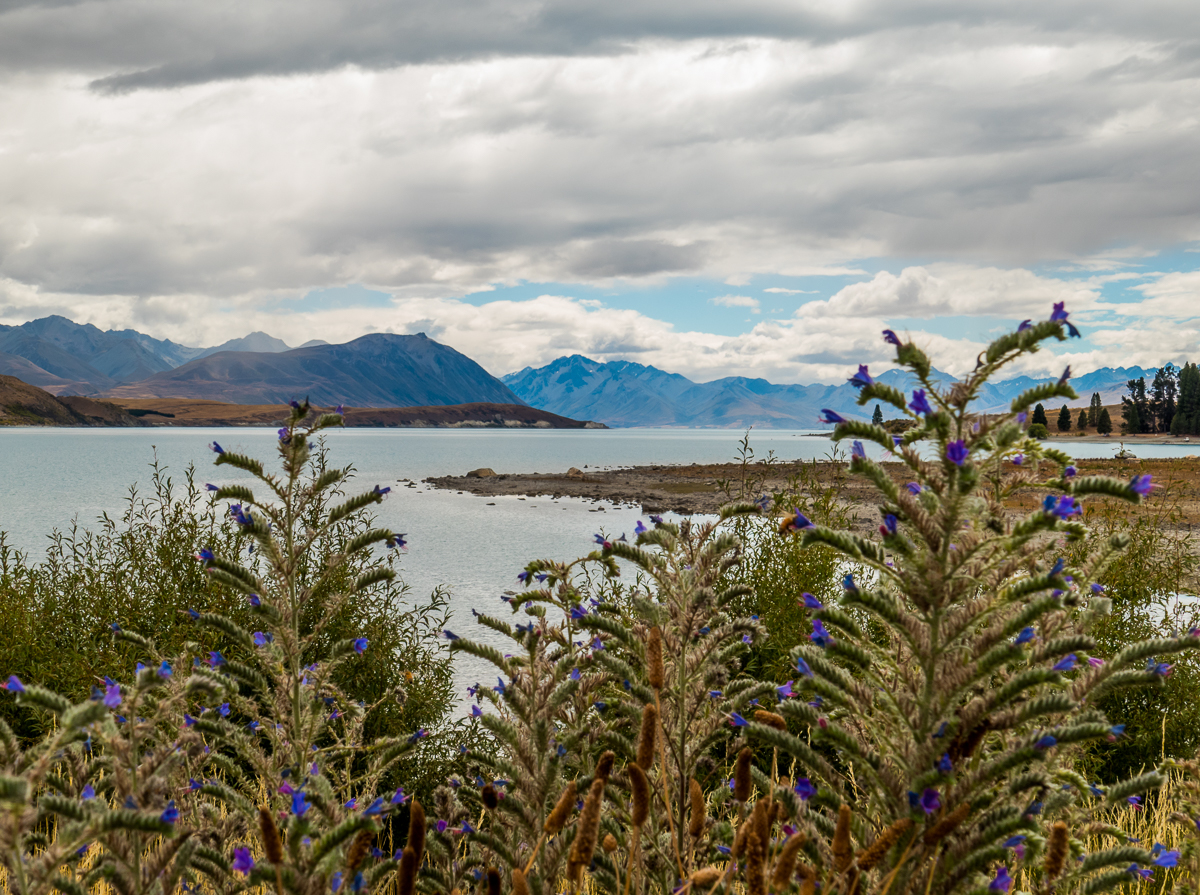 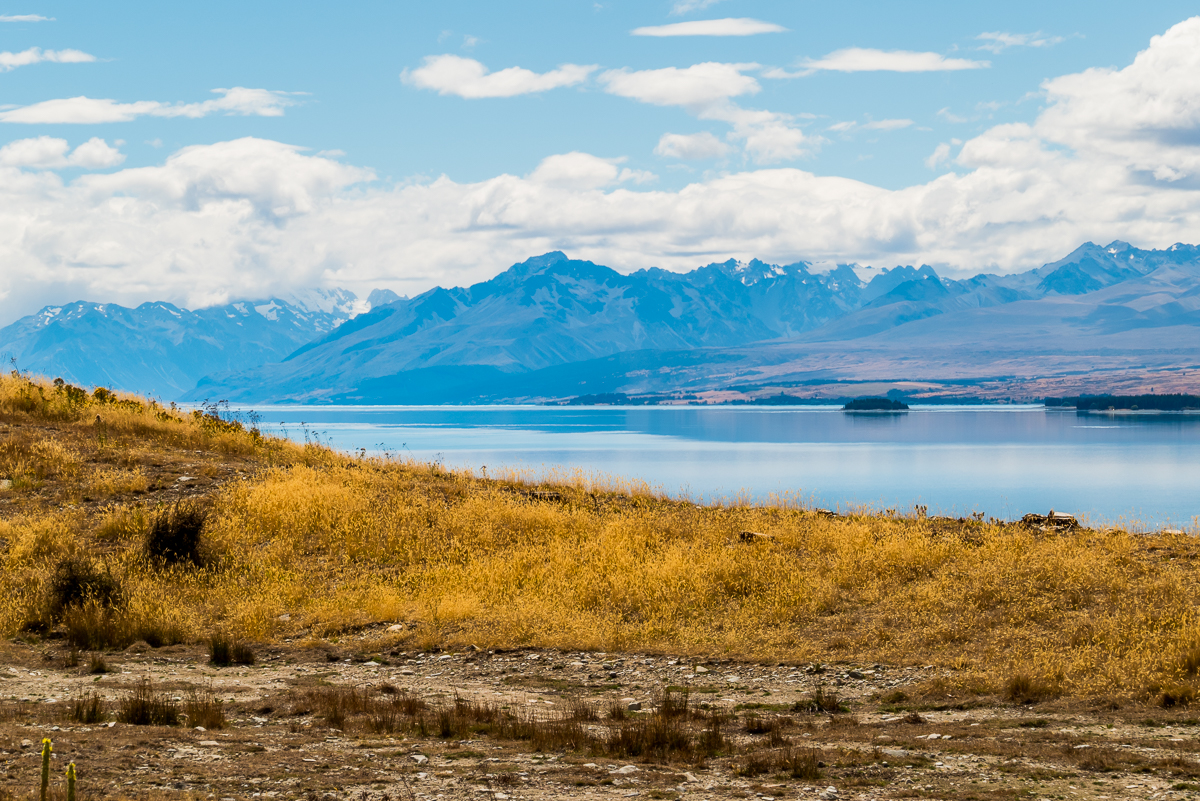 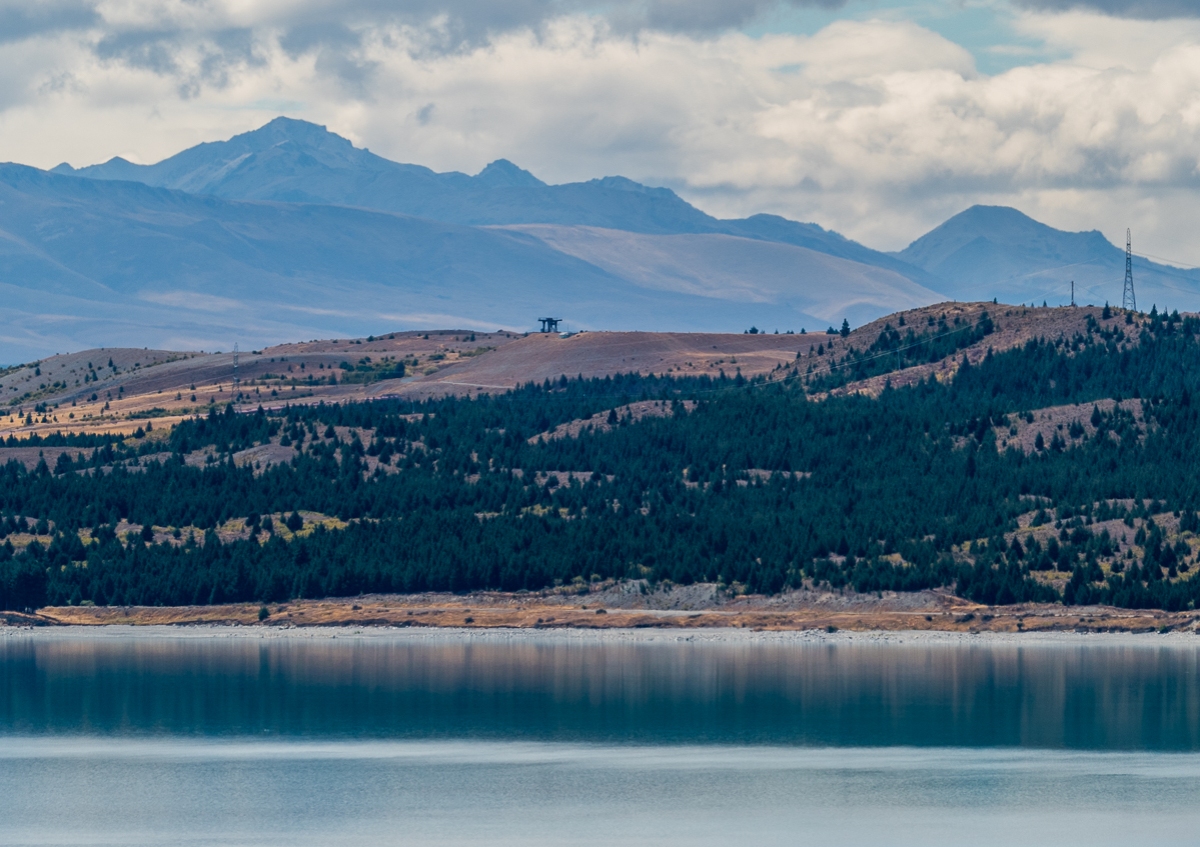 Fiordland National Park lies in New Zealand’s largely uninhabited southwest and the scale of the landscape is magnificent: glacial lakes, valleys, and glorious fiords carved by glacial action over thousands of years. The northernmost fiord is Milford Sound and is the most popular tourist destination in the country.

Due to limited time and chasing the weather we did what millions of others do, we took a day trip from Queenstown. We set out by bus in clouds so low we were in them, and heavy rain. The guide kept assuring us it would clear up once we were over the mountain pass and down into the Milford Sound valley but I was skeptical. It did clear enough for a couple of stops along the way. To my delight there were keas, a parrot native to New Zealand, at one of the stops, 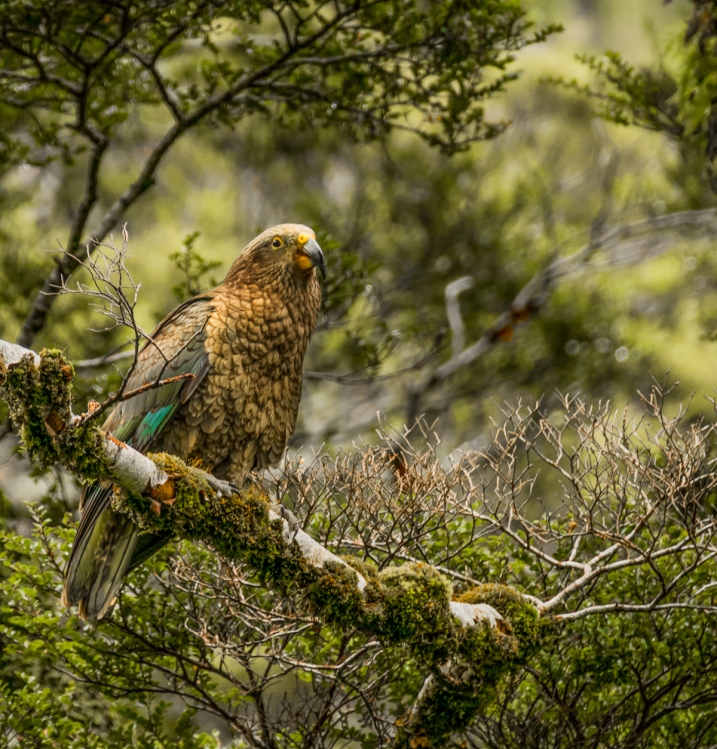 and Mirror Lake was unexpectedly beautiful, even on a grey day.

Beyond the pouring rain and low-slung clouds the drive into Milford started to look like this: 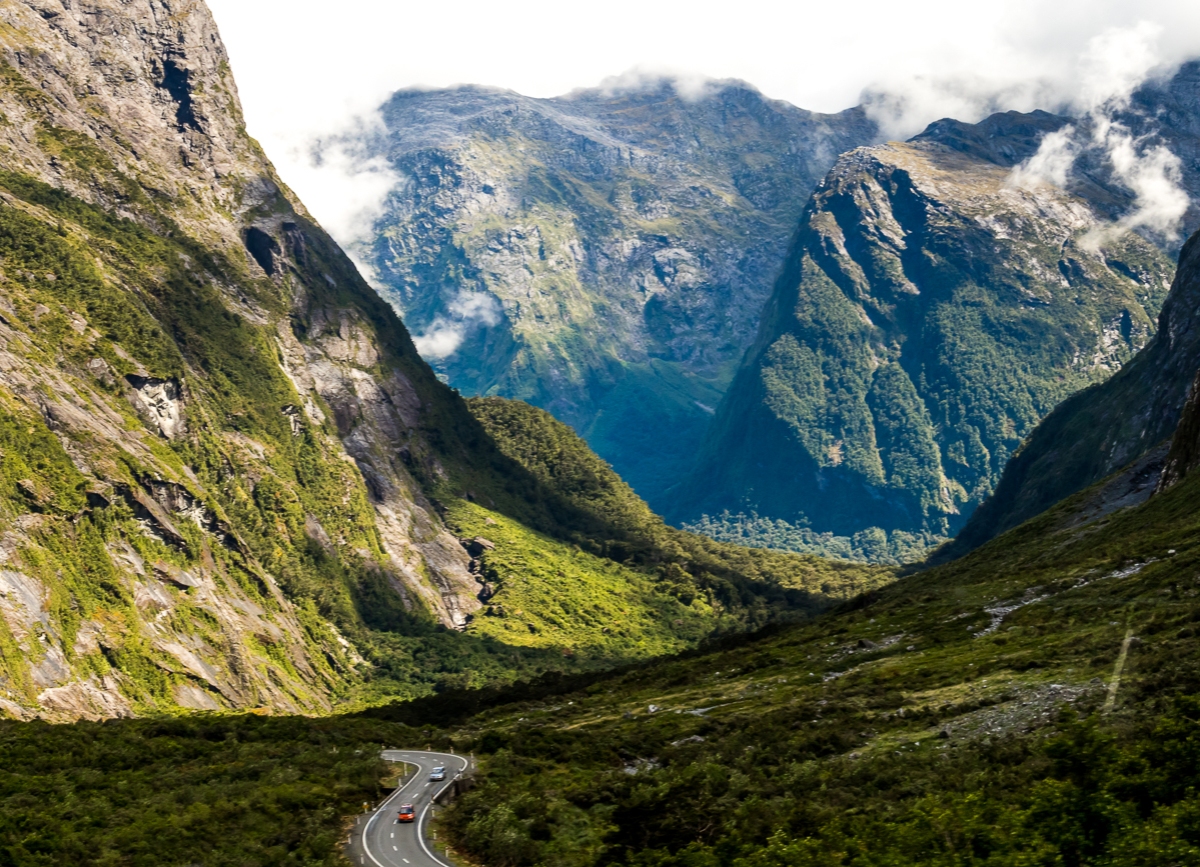 and then, in bright sunshine, we reached the Sound itself, a setting comparable to anywhere in the world for its beauty. Despite the huge number of tourists annually, the place is serene and unspoiled. 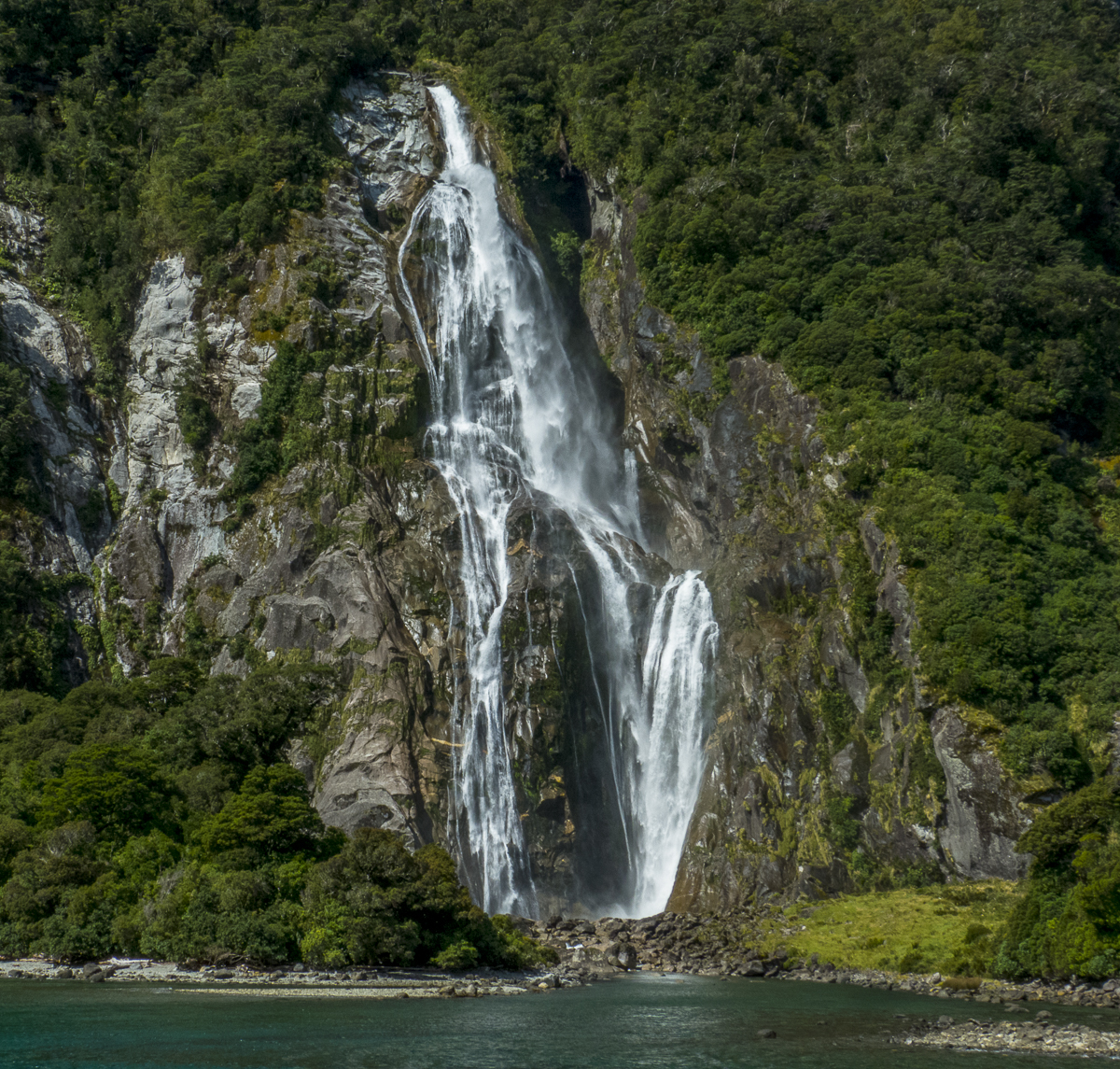 One of the delights of our cruise up one side of the fiord to the open sea and back down the other side was seeing a colony of seals. Some were sleeping or clambering on the rocks. Others were asleep in the water! 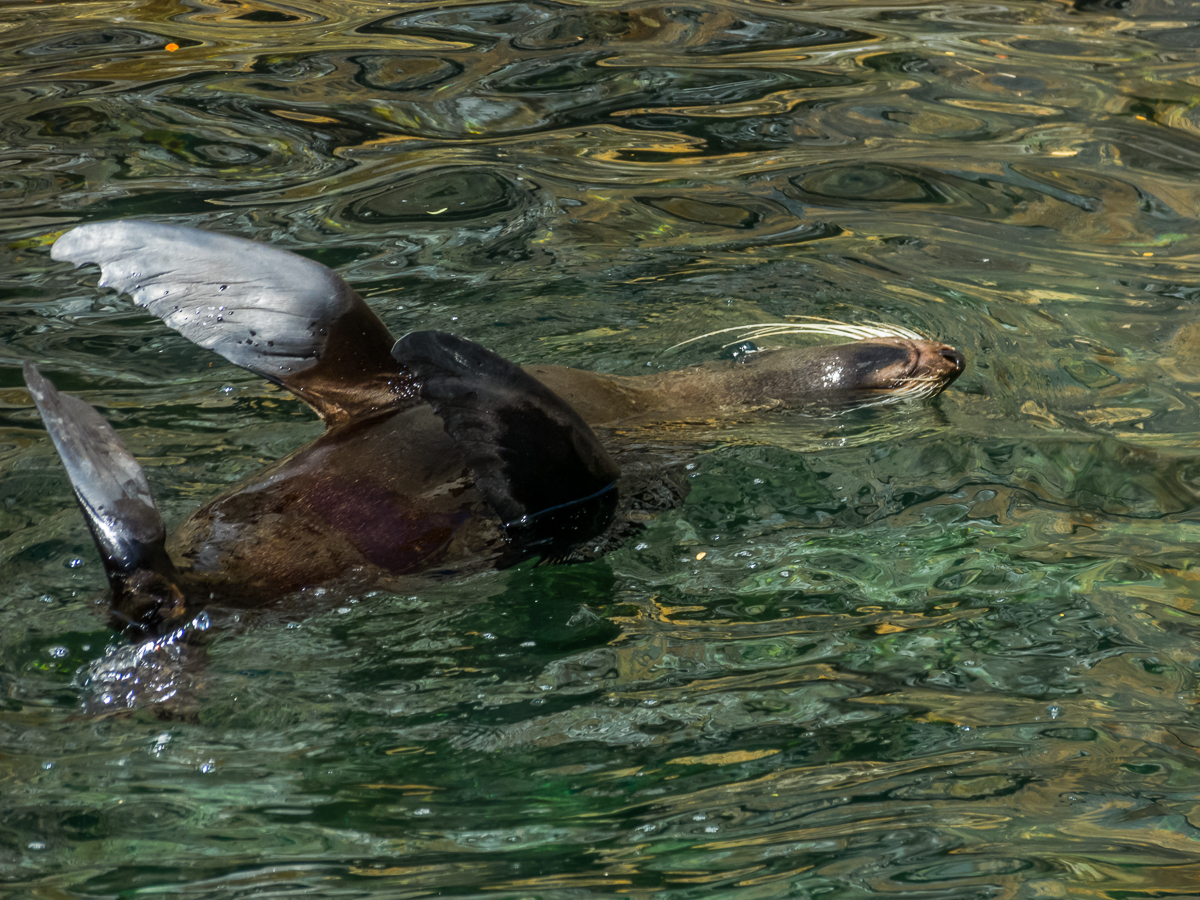 The weather continued to be our friend. The next day we cruised Lake Te Anau on a brilliant blazing sunny day, visited glowworms deep inside a mountain cave, and the day after drove to the very Scottish town of Dunedin. All that in the next post.
All words and images by Alison Louise Armstrong unless otherwise noted
© Alison Louise Armstrong and Adventures in Wonderland – a pilgrimage of the heart, 2010-2015.

82 thoughts on “The Giant’s House, Some Giant Sculptures, and a Giant Fiord”