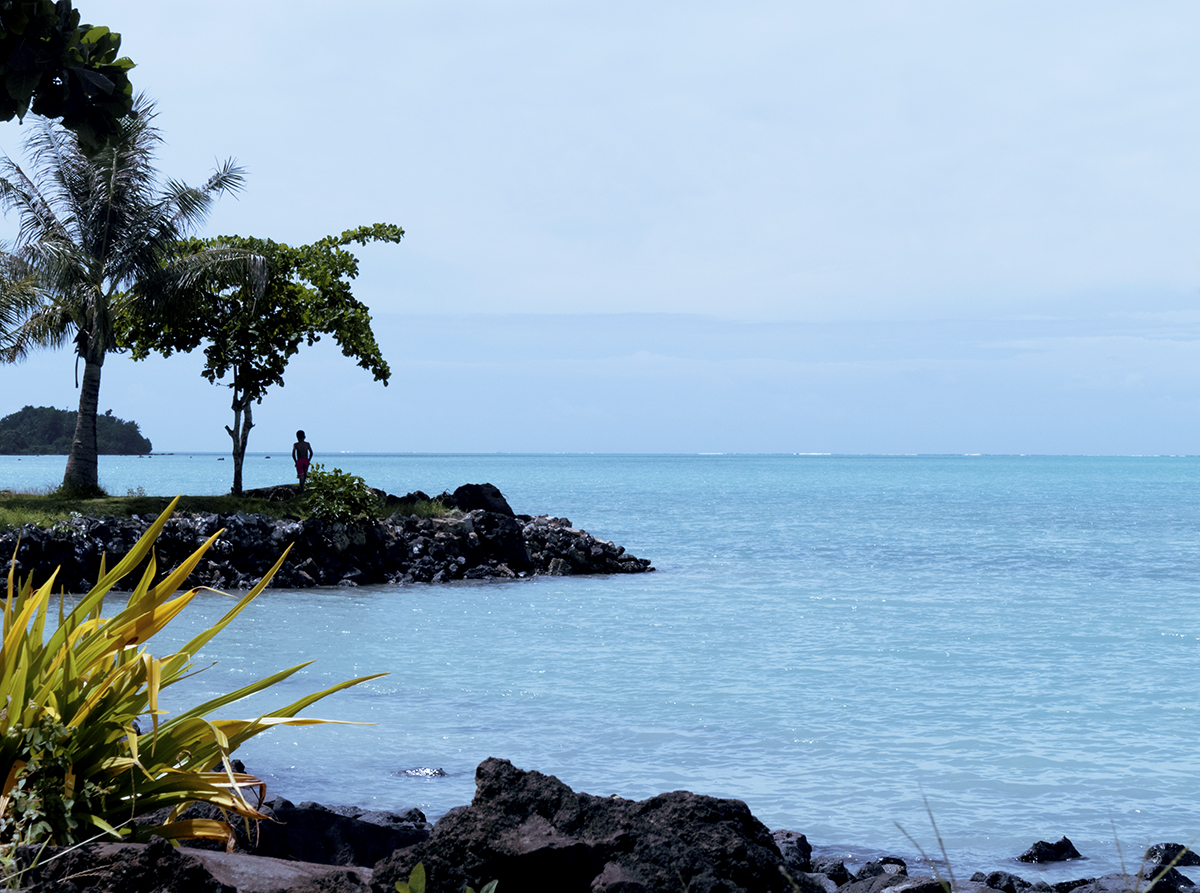 5-12 Dec 2014. In the early hours of December 5th we boarded a Fiji Airways flight from Hawaii to the Polynesian island nation of Samoa. Several hours later, jumping into the taxi provided by our hotel, we set off with great anticipation for our little self-contained cabin by the beach not far from the town of Apia.

Searching for a place to stay in Samoa, as always we were looking for something about mid range, close to amenities, Wi-Fi if possible, and most important of all, good reviews. Of course when we’re staying on a South Pacific island we’re also looking for a place by the beach. We found Taumesina Hideaway.

Taumesina Hideaway, on Booking.com is described by the owners thus:

Surrounded by swaying palm trees, Taumesina Hideaway is located directly on the beach. Guests can enjoy a free breakfast and stunning ocean views from their private patio. It is a 10-minute walk from Apia town centre.
You can enjoy a refreshing swim in the ocean, or simply laze in the sun on a comfy sun lounger. The on-site tour desk can arrange a variety of local activities including snorkelling.
Faleolo International Airport is a 35-minute drive away.

Sounds perfect doesn’t it? The reality was something different. The airport is over an hour away, it is actually a 45-minute walk to town, our cabin was across a ‘garden’ and across the road, and across another ‘garden’ so not right on the beach, and was basic in the extreme. I’m okay with basic. Don not so much. What I was not okay with was this: 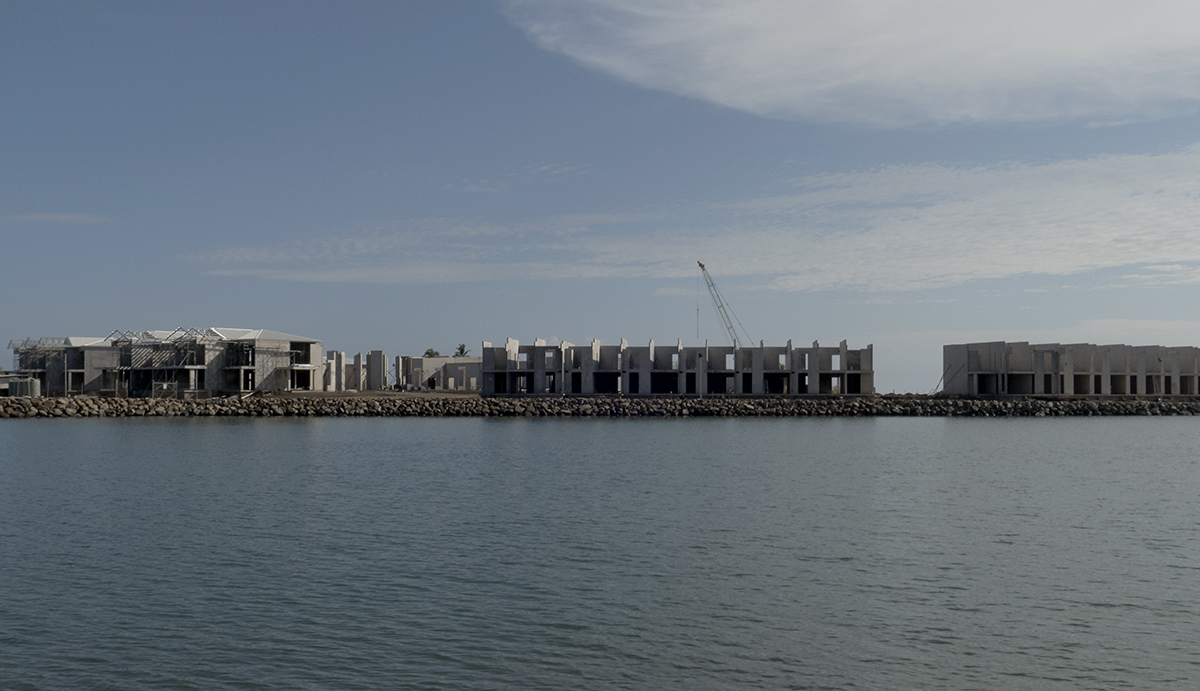 This new construction stretched the whole length of the bay directly in front of Taumesina Hideaway. The sense of entitlement of the wealthy conglomerate, variously from Australia or New Guinea or both, that would do such a thing made me angry. I suppose it matches my own sense of entitlement to an uninterrupted ocean view when that is what has been advertised. It made me sad for the owners of Taumesina Hideaway. And it was clear that we would be looking immediately for alternative accommodation.

We did stay that one night and next morning at breakfast I talked to the owner about it. I asked if she had received compensation for the thorough and permanent loss of her beautiful sea view. Her reply was ‘not me, the village’. It had been decided by the matai (the village chiefs) to allow the development essentially in exchange for employment. Local people are being employed on the construction, and local people will be employed at the resort once it is completed. Also the hope is that the resort will bring more tourists to the village and more development to the area. Already a small store has opened close by, and a café is expected soon. Such is the price of progress. One can hardly blame the Samoans for wanting more prosperity. Perhaps when the resort is complete and its gardens grown it will not be such a stark and uncompromising interruption to the natural beauty of the area.

Our new hotel, not on the beach but closer to Apia, was luxurious in comparison, and had a restaurant serving enjoyable, if not outstanding, meals. At Taumesina Hideaway there was no such convenience, which wouldn’t have been a problem if it really had been only a ten-minute walk to town and thus to restaurants.

Once established at the new hotel after this inauspicious beginning we began exploring Samoa, and discovered one of the most wonderful places we’ve been to.

About half way between Hawaii and New Zealand, Samoa consists of two large islands, Upolu and Savaii, and several small islets. Not be confused with American Samoa, which is part of the same group of islands but is an American territory, Samoa gained independence from New Zealand in 1962. The population is estimated to be something over 190,000 and the only town of any size is the capital, Apia on the island of Upolu. The most dominant building in Apia is the Catholic Church, a grand edifice right by the water. 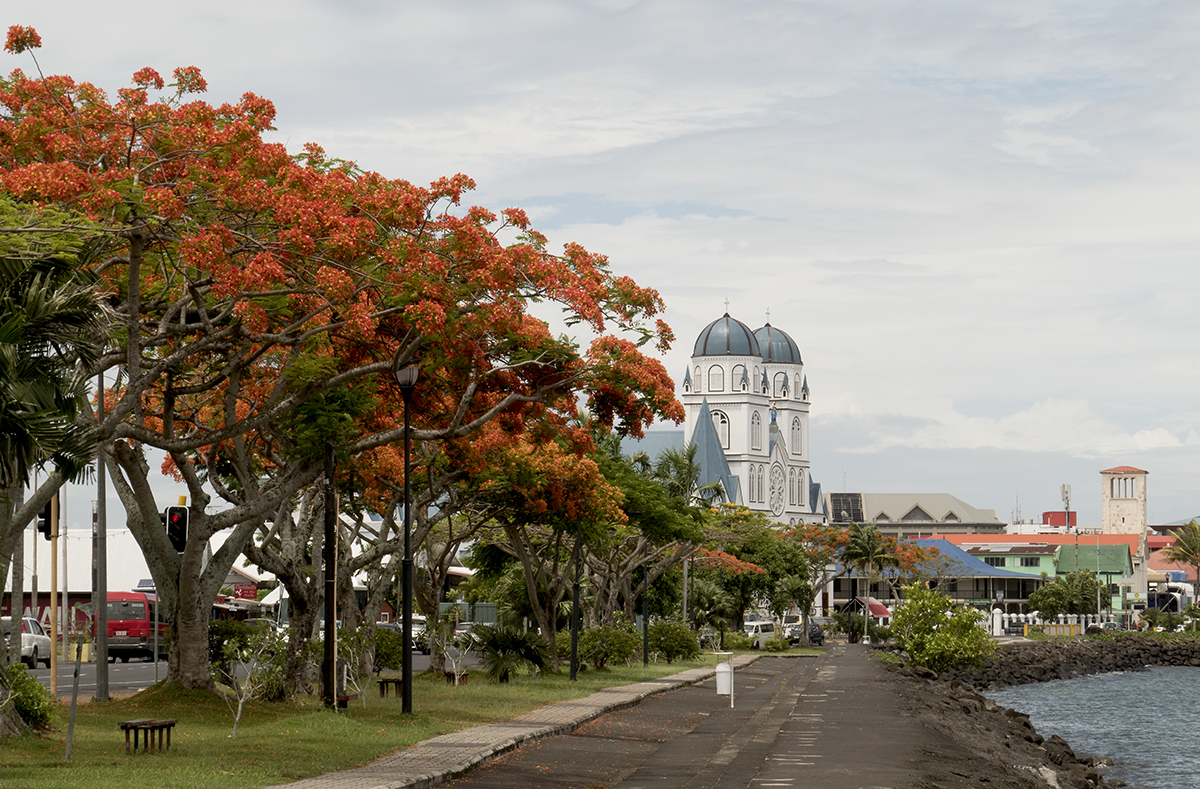 We find the people to be incredibly welcoming and friendly wherever we go. At the market

I am photographing this family when the woman behind sashays up to join in, making everyone laugh, 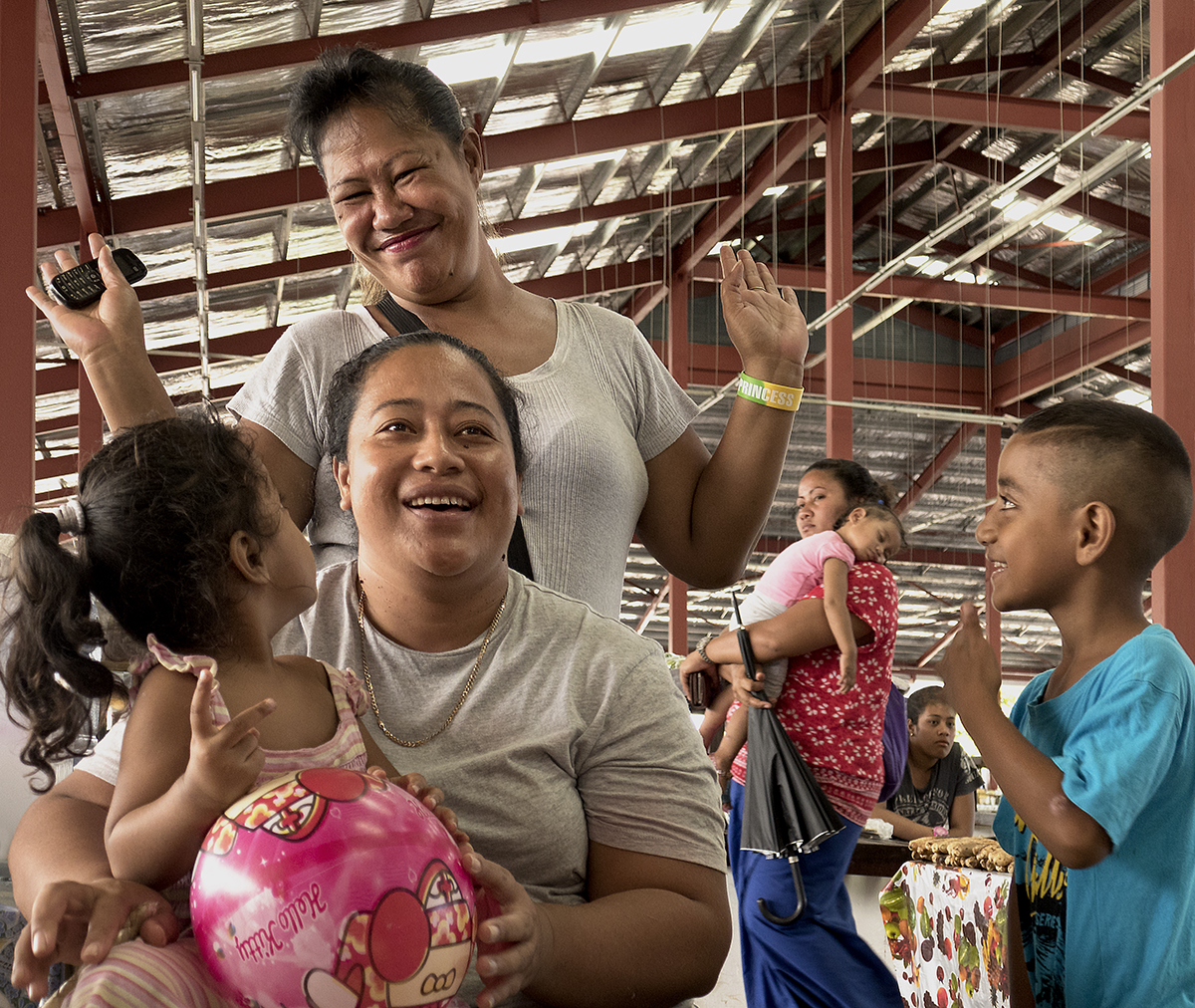 and the younger daughter shows she has already learned the requisite peace sign for photographers.

This young girl shyly asks to be photographed.

One woman I spoke to said she comes in with her harvest every day by bus and taxi from her farm near the airport, a journey of well over one hour. At the end of the day she returns by taxi. Given the deeply family-oriented nature of Samoan culture it’s probable that her family farms the land while she is gone all day.

The flower sellers are clustered together. One of them is making beautiful arrangements for funerals. Each arrangement is a tier of ‘flowers’. The triangular backing is large green leaves, with white ‘petals’ made from ribbon held on with toothpicks, some gold spray paint, and finally at the centre of each ‘flower’ a small orchid that she has grown in her own garden. Many Samoans grow flowers so they can contribute to the church flower arrangements.

Over the years Samoans have emigrated to New Zealand, Australia and California in order to find work, sending what they can back to their families. Tourism now accounts for about 25% of the economy, while agriculture and fishing are the main sources of income. Given that these are isolated islands in the middle of a vast ocean, it’s not surprising that fishing would be integral to their way of life, and that almost everyone lives in villages ringed around the coast.

At the local fish market I find the greatest variety of colourful fish I’ve ever seen at a market. The really big fish are tuna. 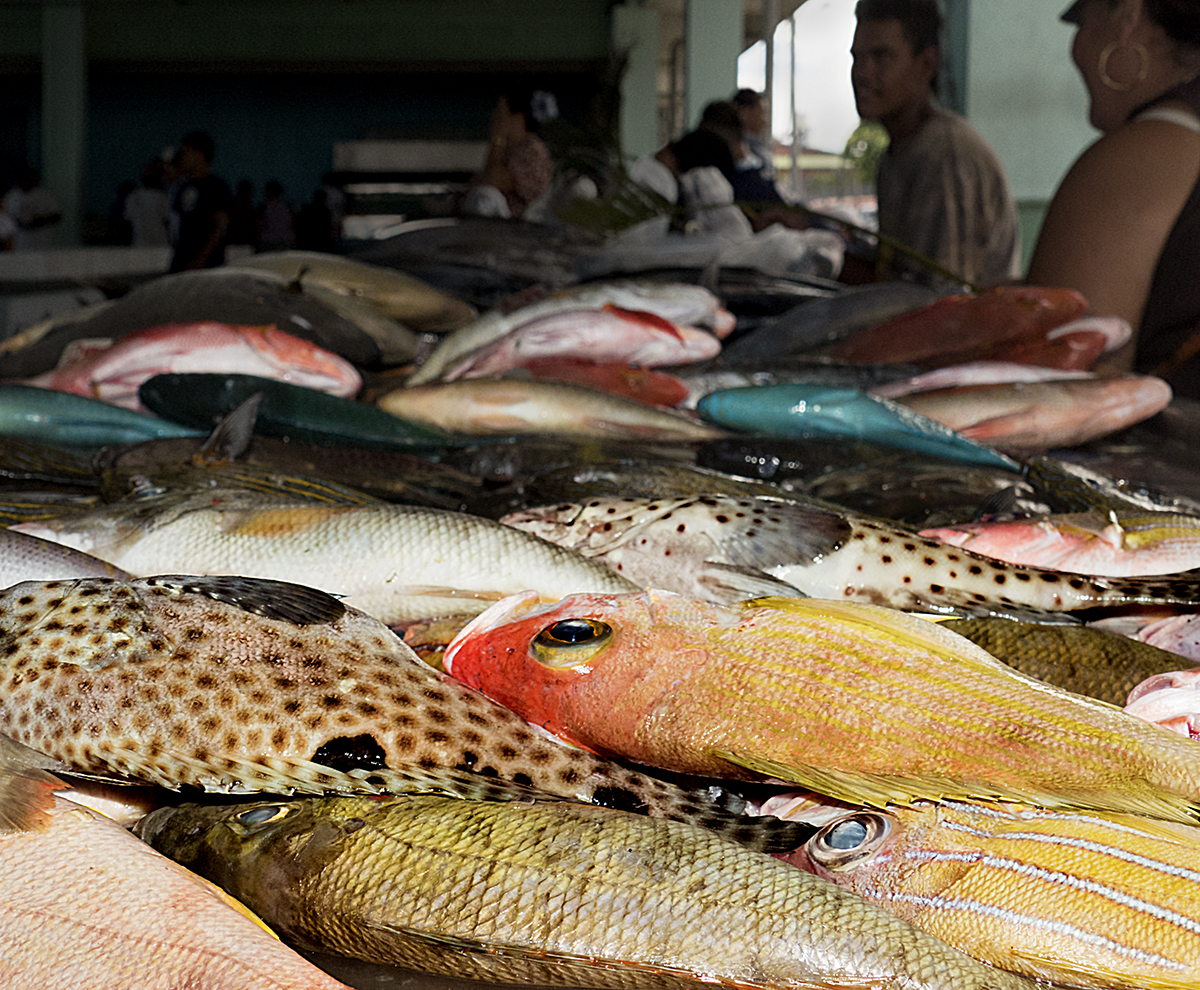 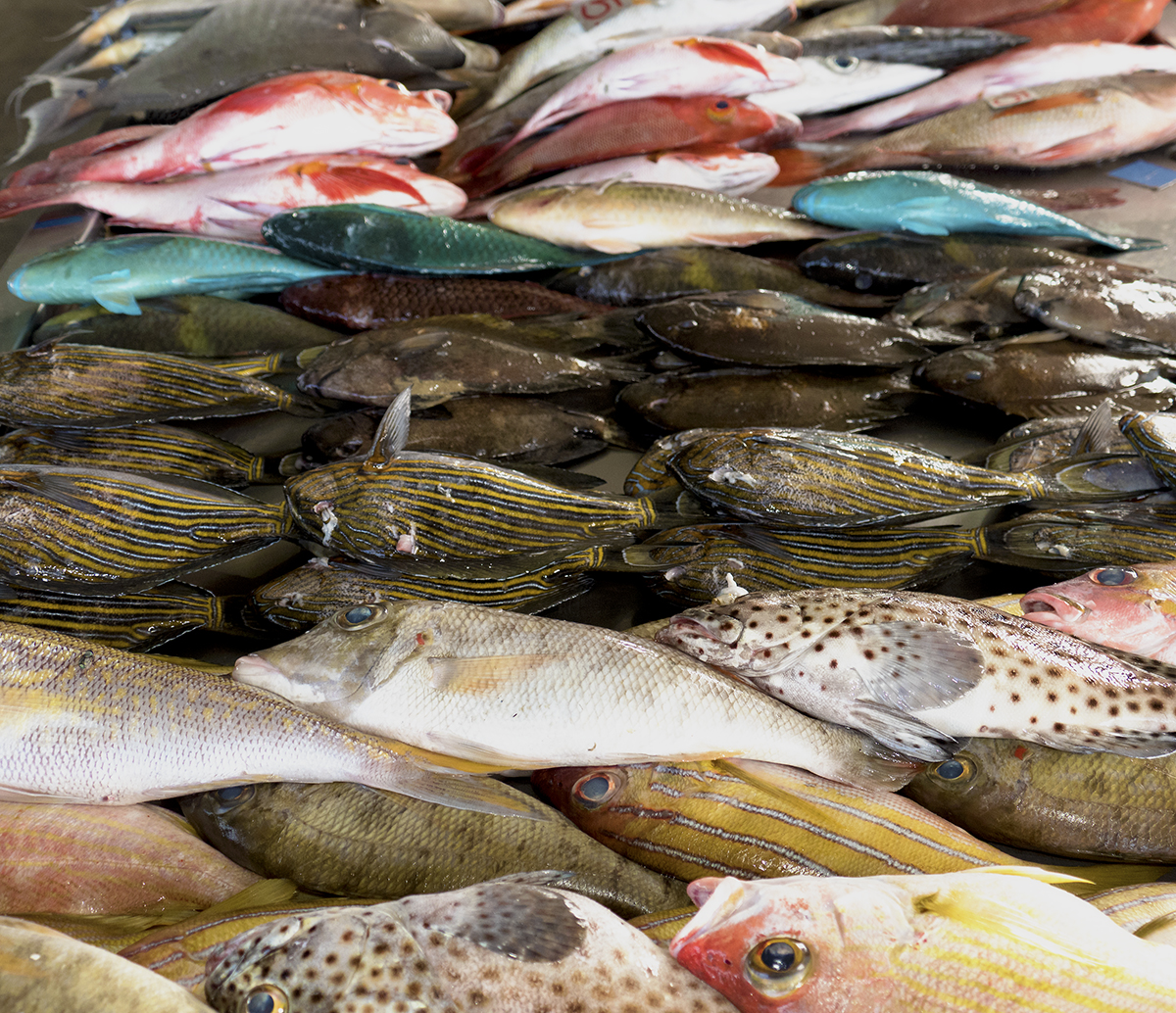 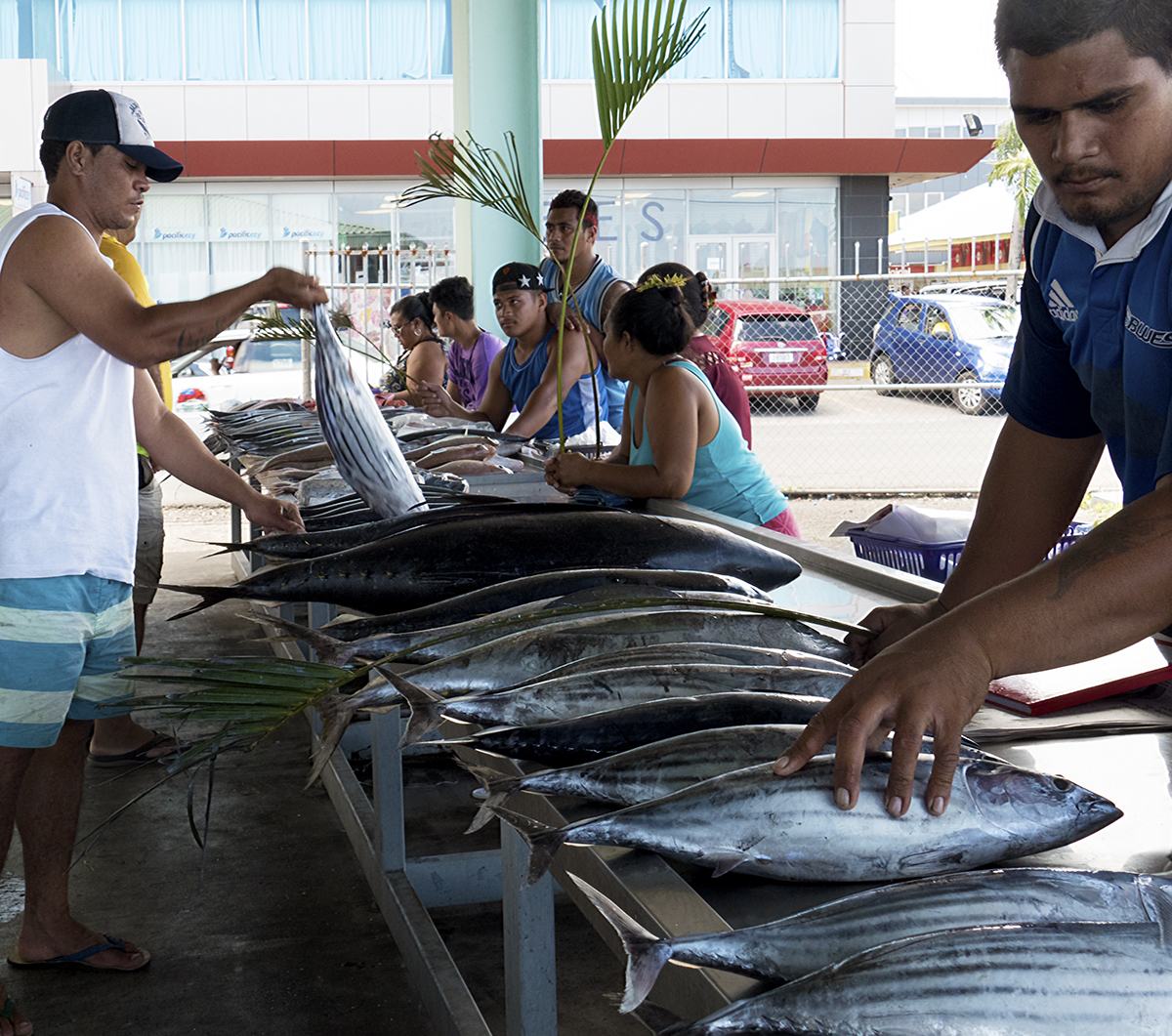 There’s another market area by the water just along from the big church,

and a joyous woman there spontaneously puts on a show just for me, dancing the local Polynesian dance while I photograph her.

These baskets are woven from coconut palm leaves and are carried one on either end of a pole across the shoulder. 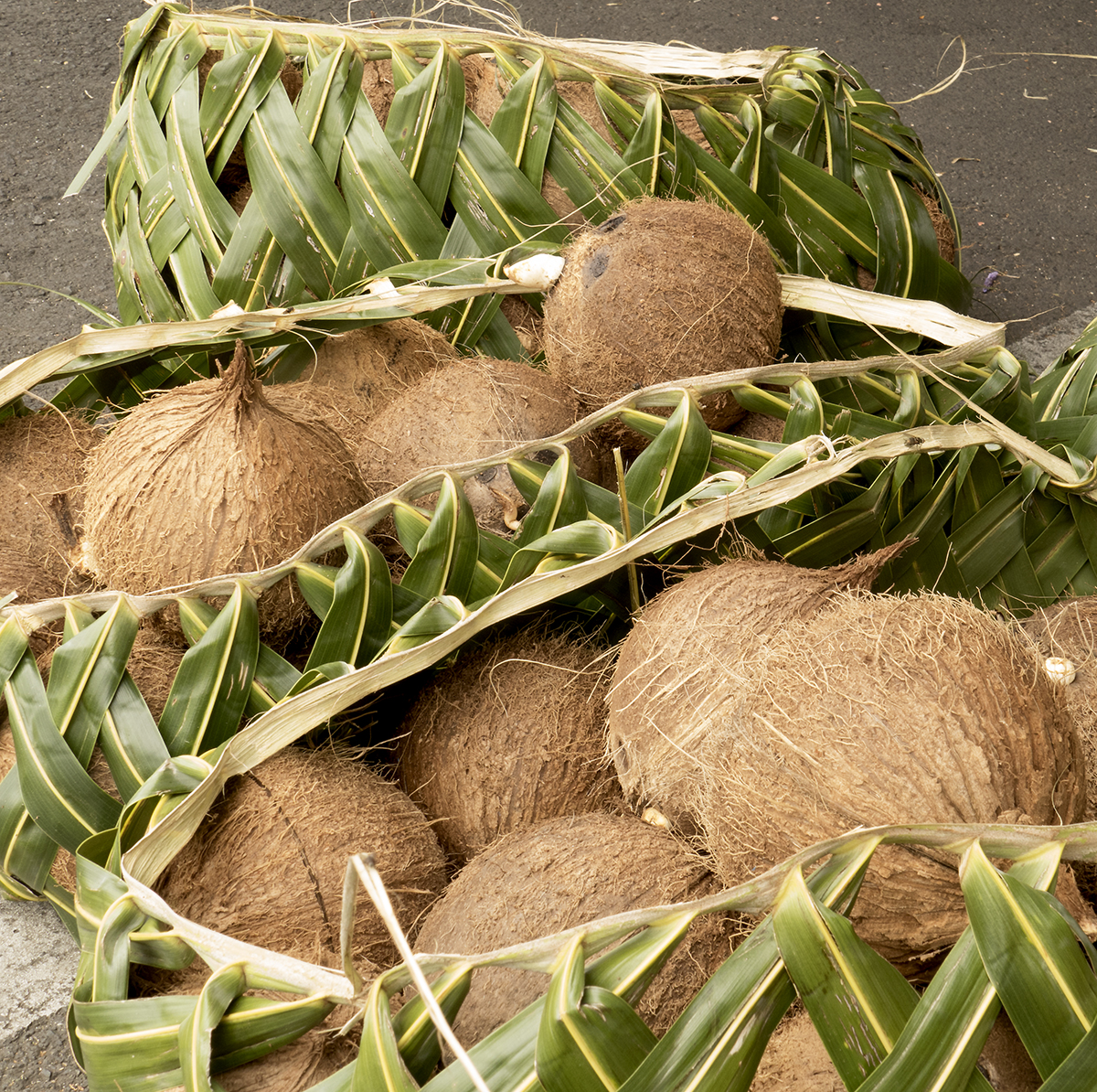 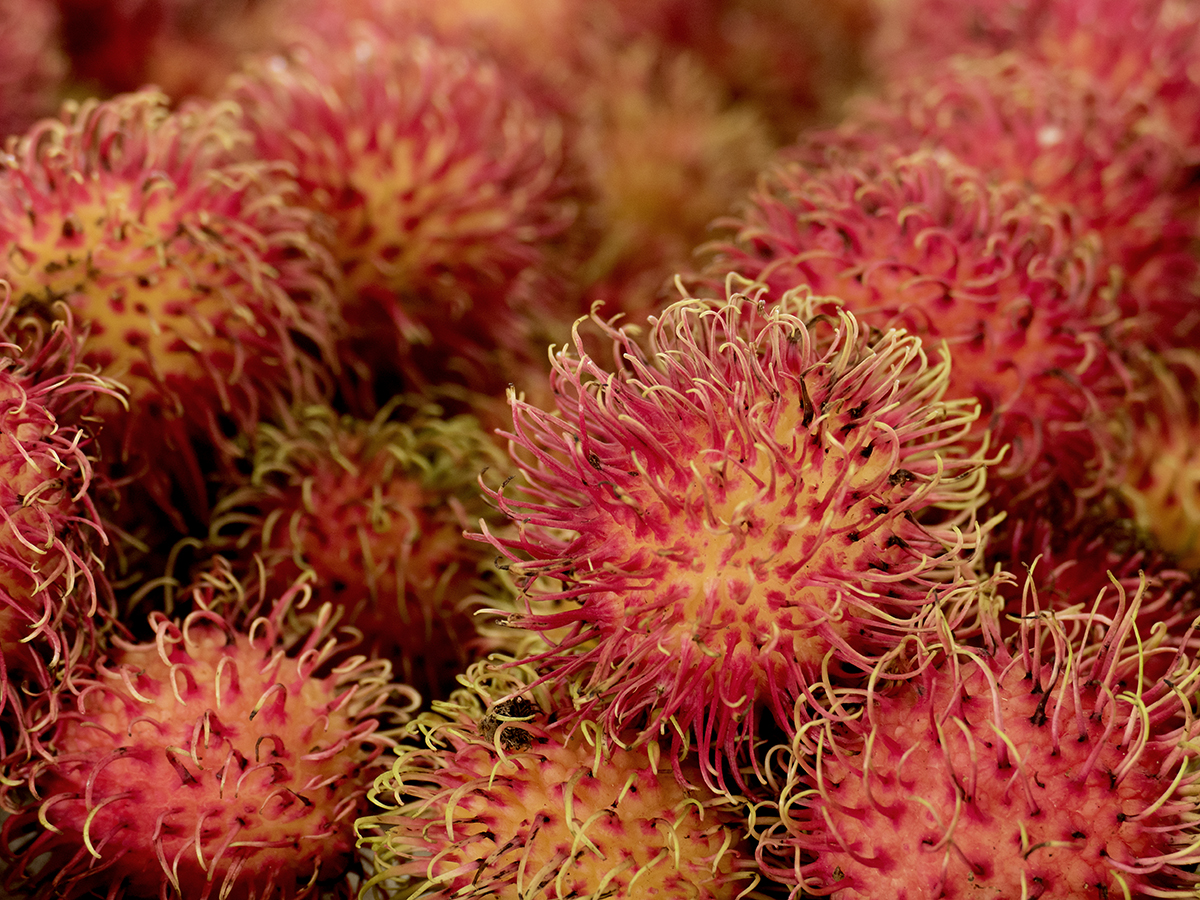 It’s hard not to be dazzled by the brilliant colours. Even the buses are colourful, creative, truly imaginative works of art. The buses travel all over the island and almost every one is different. There’s Kingdom Transport, and Tuisamau Transportation, and a bus called Lady Elizabeth, and Sunrise Transport, and my favourite, Skippy Bus.

This collection of photographs is on the wall in a café near the market.

It’s hard not to be charmed by the Samoan people who are invariably friendly and welcoming. During our time there we explored two of the islands, visited with a family during a torrential tropical downpour, went to a truly mind-blowing church service, went swimming in a lava hole 30 metres below ground level and attended a traditional dance performance. Villages, houses, streets bordered by flowers, forests, waterfalls, language and lifestyle. All this to come in the next two posts.
All words and images by Alison Louise Armstrong unless otherwise noted
© Alison Louise Armstrong and Adventures in Wonderland – a pilgrimage of the heart, 2010-2015.

82 thoughts on “The Dazzling Colours of Samoa”