13-21 February 2014. High in the Andes in Peru year after year the snow melts into rivulets forming creeks forming streams forming rivers. From the mountains the Rio Marañón flows north for a hundred kilometers or so before heading east for five hundred kilometers, at which point it joins the Rio Ucayali.

High in the mountains some thousand kilometers to the south a river begins its voyage north. As part of its journey, in a deep canyon,  it curves around the citadel of Machu Picchu forming a natural defense on three sides. Further north it connects with another river, coming from the west, to form the Rio Ucayali, and eventually the Ucayali turns east.

About eight hundred kilometers directly inland from the coast of Peru the Rio Ucayali and the Rio Marañón merge to form the great Amazon River. It is here that the Amazon begins its more than six thousand kilometer journey to the sea.

It is far beyond the mountains at this point, close to the equator. Tropical. Half the year it rains torrential rains. The river rises by more than nine meters flooding the surrounding forest and creating many side rivers. Its width expands by forty kilometers or more. The Amazon area, a giant tropical forest and river basin covers more than five and a half million square kilometers, and here live more than one third of all known species in the world. It is truly epic in size and scope.

Those who live along the riverbanks in Amazonia are known as Ribereños. They are predominantly a mix of detribalized natives and mestizos, hardy and adaptable. In small towns or villages or individual farms, they live on a rich flood plain that undergoes colossal changes each season. The river is the focal point of their lives. It is used for washing, fishing, bathing and the water for cooking. There are no roads in the jungle. The rivers are their roads and they travel by dugout canoe or, when occasion demands, by the local river bus. Children learn how to operate a canoe from a very young age. Their livelihood depends largely on farming, fishing and hunting. They have intimate knowledge of the river and the flood plain, and male children learn early the intricacies of fishing. They really are Ribereños – people of the river. The river defines them, and their way of life.

A fisherman-farmer pulled up to the shore at his home with his catch of the day. His pigs and ducks come to investigate. He also has many chickens. He and his family have a large typical home on stilts. Wooden, half walls, thatch roof.

There is a village close to the lodge and we go to visit. The people are open and friendly and invite us into their simple homes. The children are shy at first but it doesn’t take them long to gather around us and start mugging for the camera. Later there is a soccer game. I don’t want to sugarcoat the situation. At the tiny store we meet the convivial town drunks playing cards as they drink the powerful local brew. Compared to the western world there is poverty here, perhaps particularly in the area of medical and dental care, but the atmosphere at the village seems light and friendly, the kids energetic and playful.

The children of the village 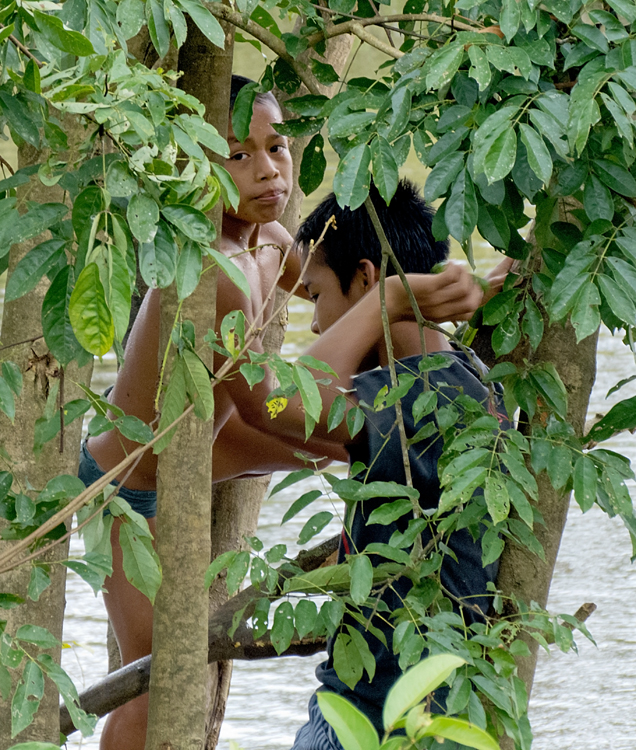 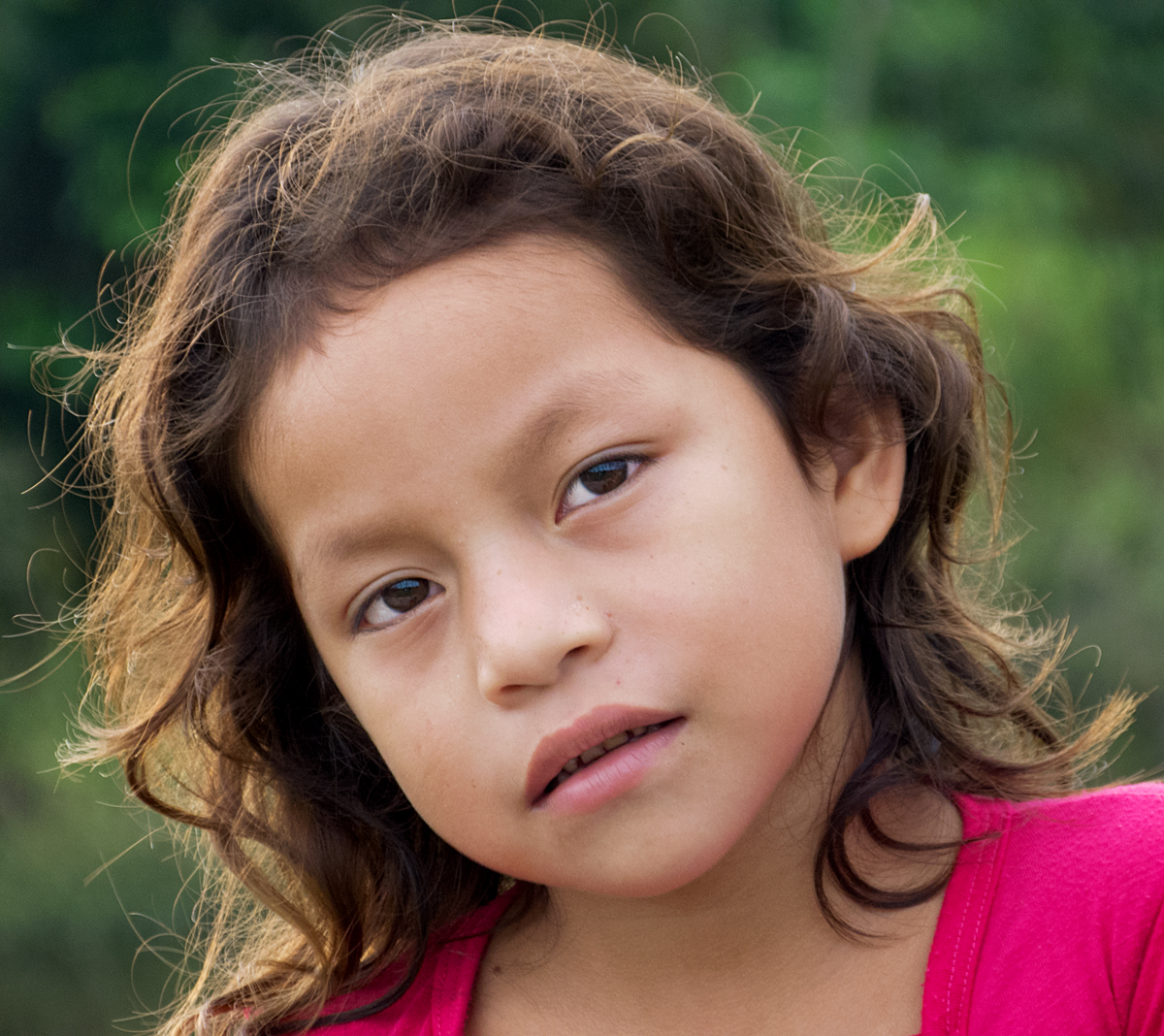 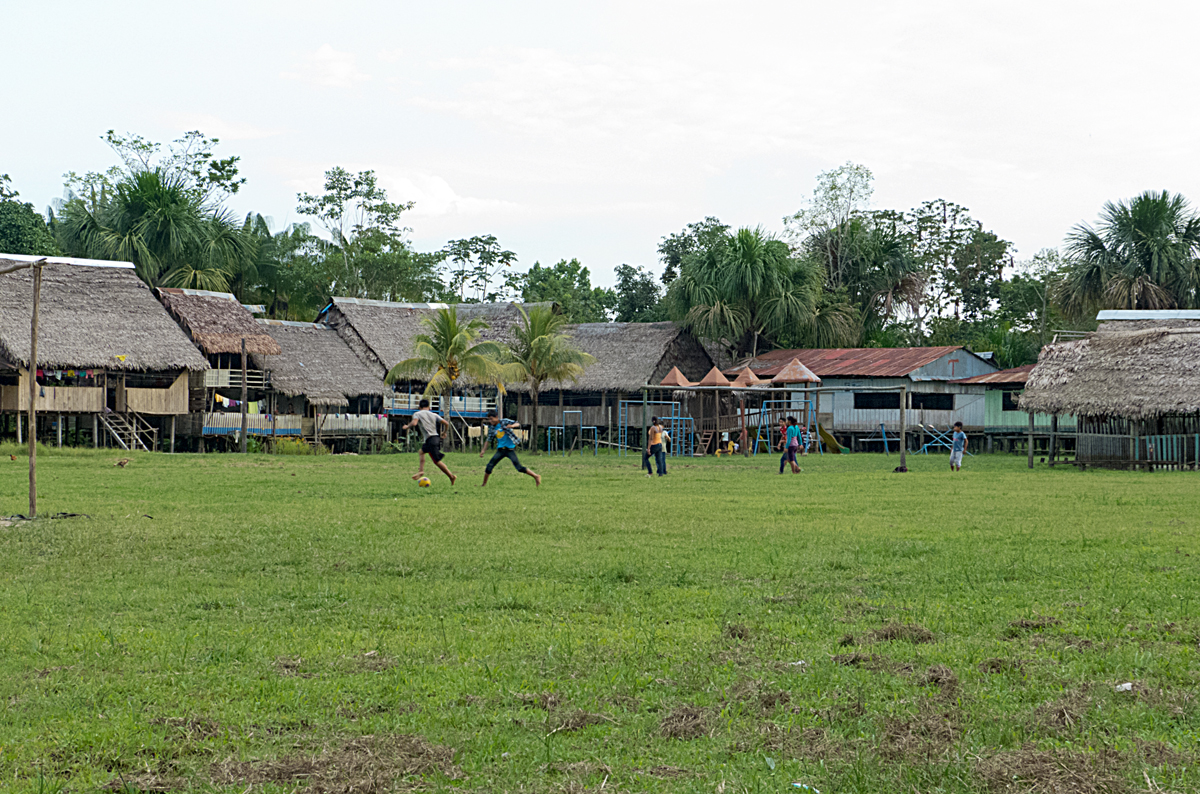 Sunset from the village – spectacular!

The river bus from Iquitos.

We are out exploring every day searching for life in the depths of the forest and in the canopy high above. We see: 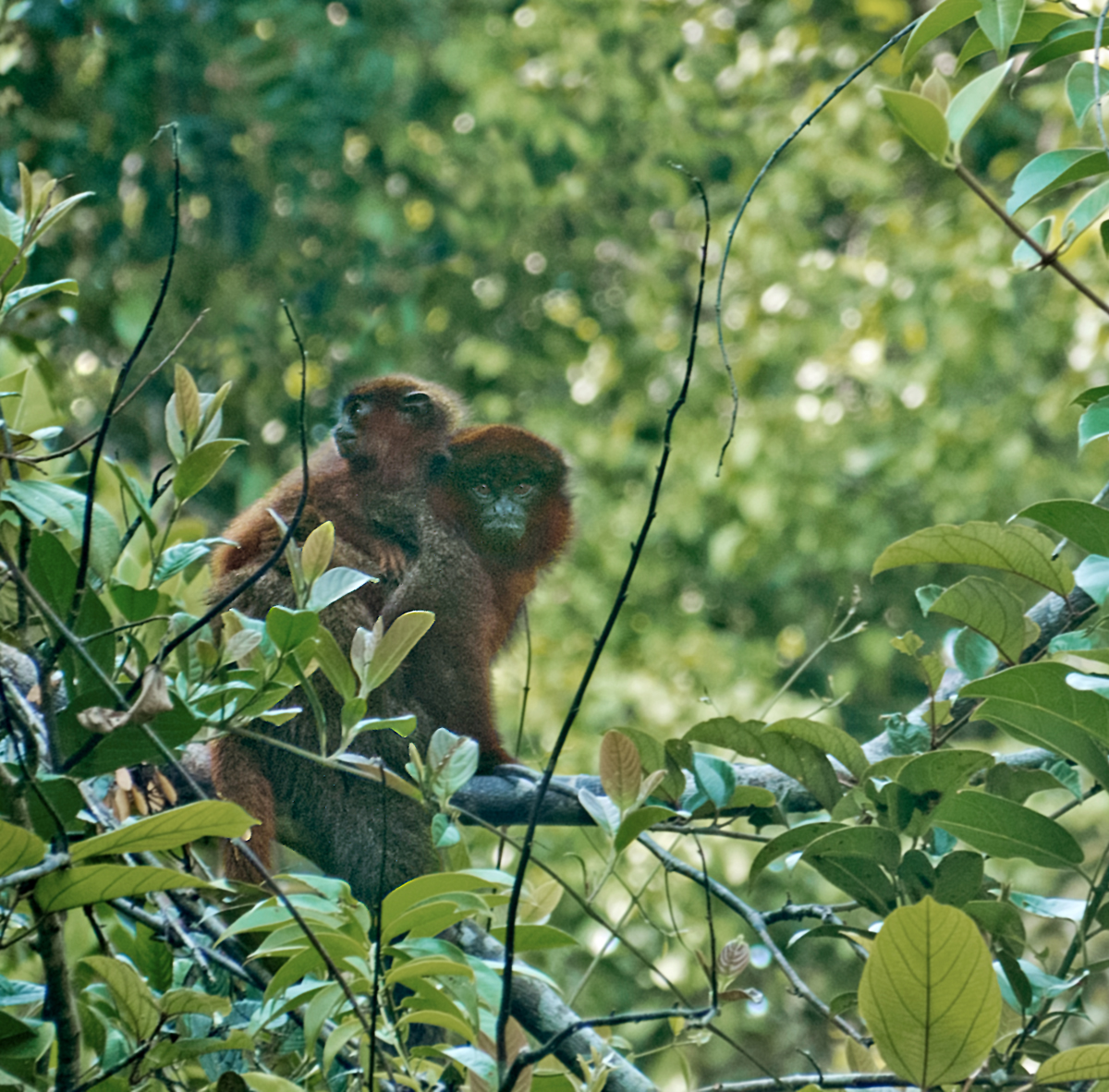 half a dozen tiny bats hanging off a tree, 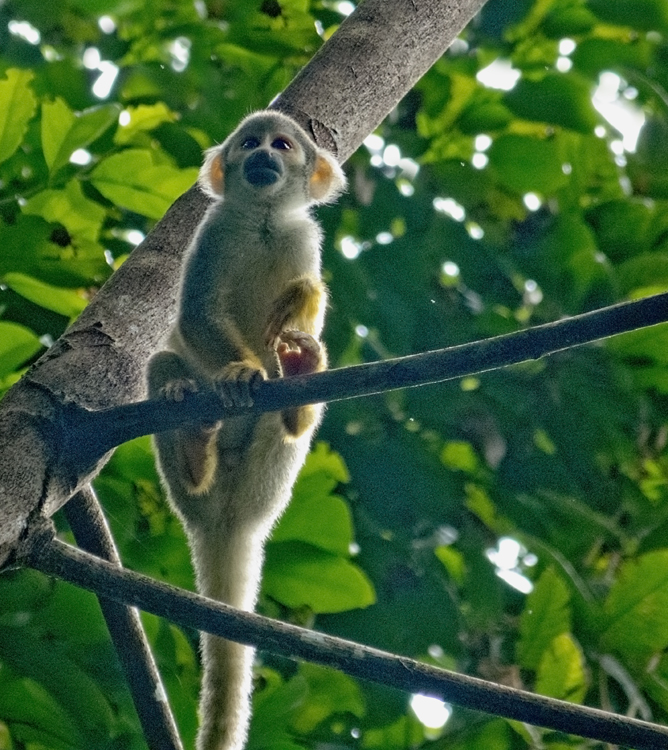 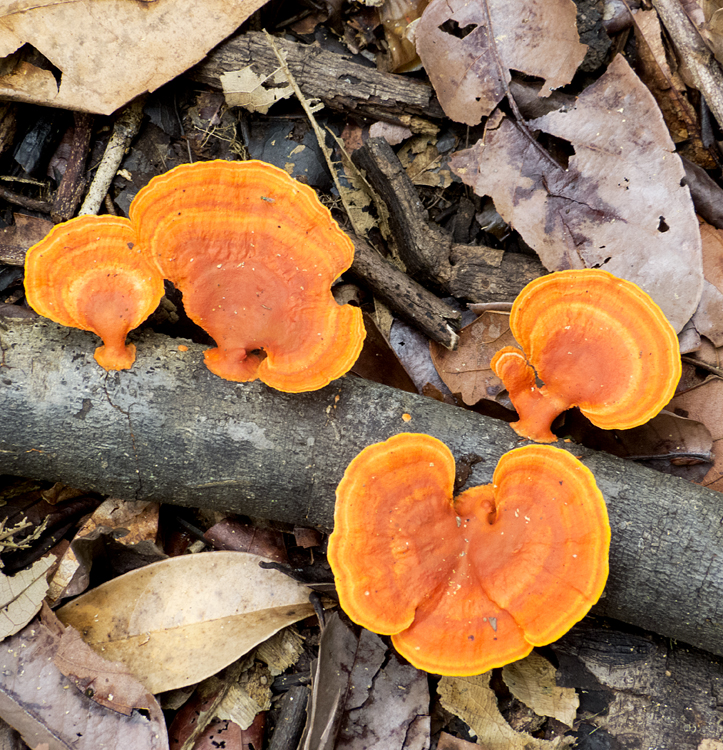 an emerald tree boa right in the grounds of the lodge, 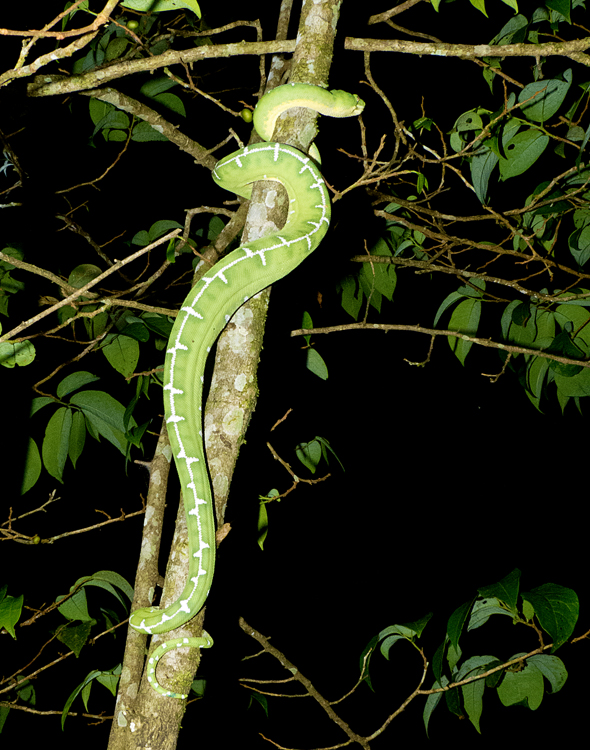 a highly poisonous caterpillar swimming in the river,

and on many occasions blue and yellow macaws. 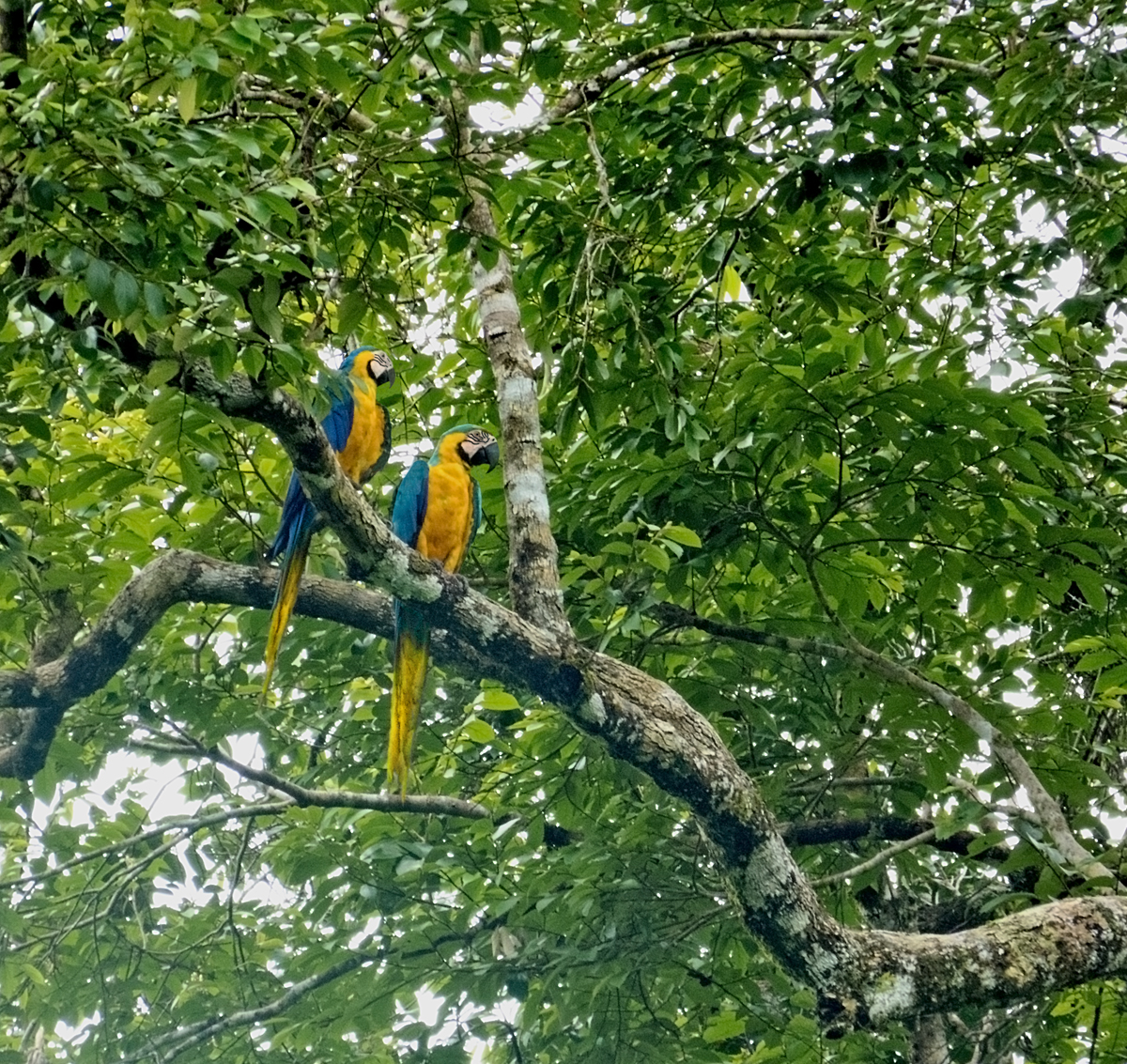 Sloths are . . . . . slothful. They eat leaves. They sleep a lot. Once a week they come down to the ground to poop. Twice heading back to the lodge at dusk the boat slowed, then stopped, as the guides pointed out a sloth high in the trees. How they ever saw them astonishes me – nothing more than brown blobs, but expert eyes could pick them out. Then one day, in daylight we saw a baby, in full view and not so high up.

After five days at the lodge we went further up river to the Research Centre for four days. From there we set out to find the strange, unique and prehistoric hoatzin (watsin) bird. It eats fruit and leaves and has a digestive system similar to that of a cow. On our journey our guide becomes aware of howler monkeys high above clustered in the foliage. They’re not moving around much and we can’t see them. Next thing we know our boat driver grabs hold of some vines, and in bare feet starts using them to climb up the tree to encourage the monkeys to move so we can see them. He has to climb right to the top. It’s about fifty metres above us. He is fearless. We can hardly believe it. There we are standing around straining our necks trying to see the monkeys and suddenly this guy throws himself at the vines and starts climbing. Up and up and up. It was epic! Eventually the monkeys are disturbed enough to move and we catch glimpses of them leaping from tree to tree. They are powerful and majestic. They are entirely at one with their environment. As is the lithe and agile boat driver.

Further along the path I see this:

It is a fresh puma print. We see several of them along the trail. Our guide assures us they are old, from yesterday. I know better. It rained torrents last night.

Eventually we come to a tree with four or five hoatzin birds. They are quite far off on the other side of a lagoon, but we can see them well enough. They are exotic and beautiful. 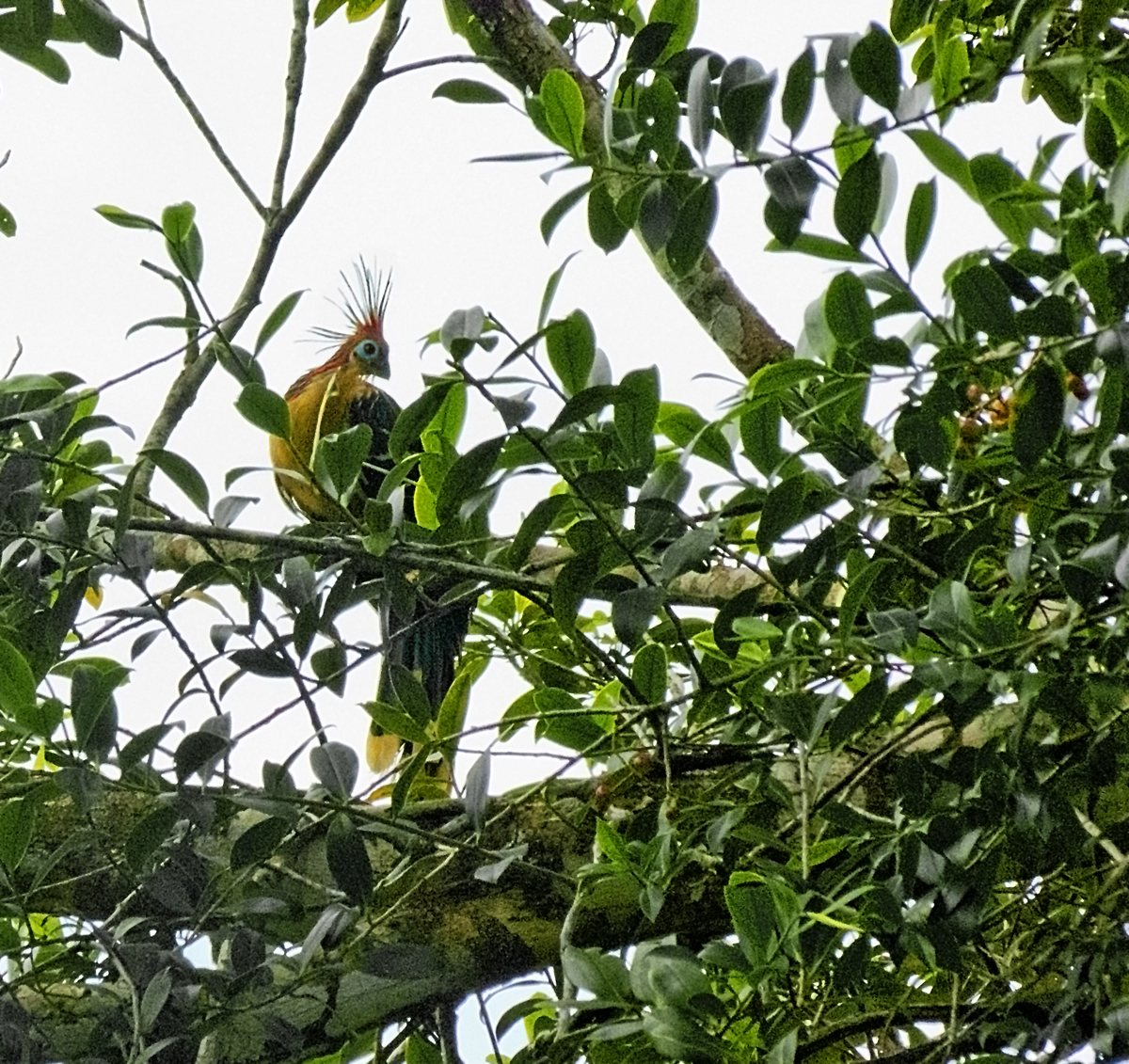 And in the lagoon, practically hidden amongst the foliage, a caiman

Outside our room at the Research Centre is a tree filled with the nests of yellow-rumped caciques: a veritable high-density cacique village, dozens of them all crowded into one tree. We’d seen red-rumped caciques with the same crowding of nests in the jungle at Iguazu Falls. 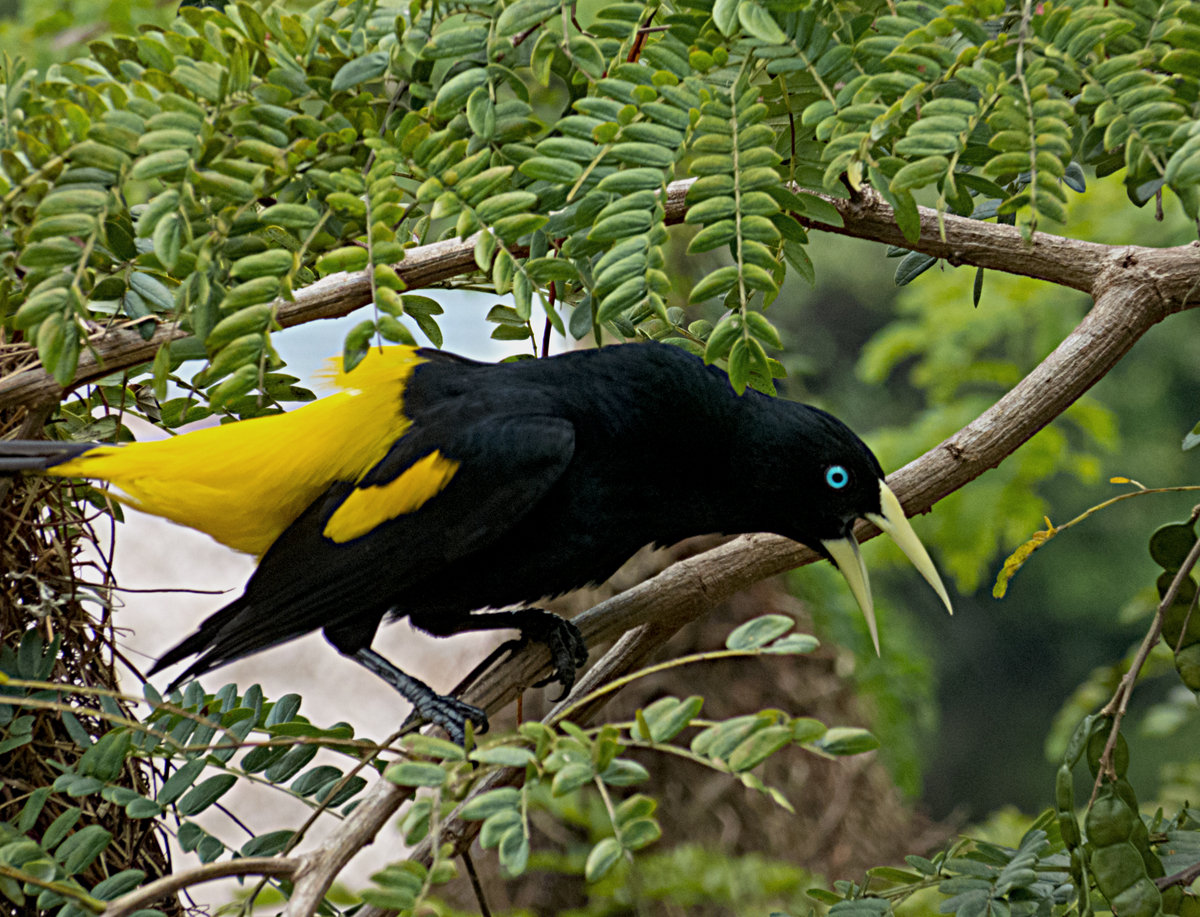 This is a wasp nest. The rings show how it has been added to over time. It is full of honey. Monkeys like to swing from it to bring it crashing to the ground to get the honey. They take turns swinging on it. When one feels it has been stung enough another takes over. Eventually one poor monkey is swinging on it when it gives way and he rides it to the ground or makes a flying leap to a nearby tree. I guess the payoff is worth the pain. 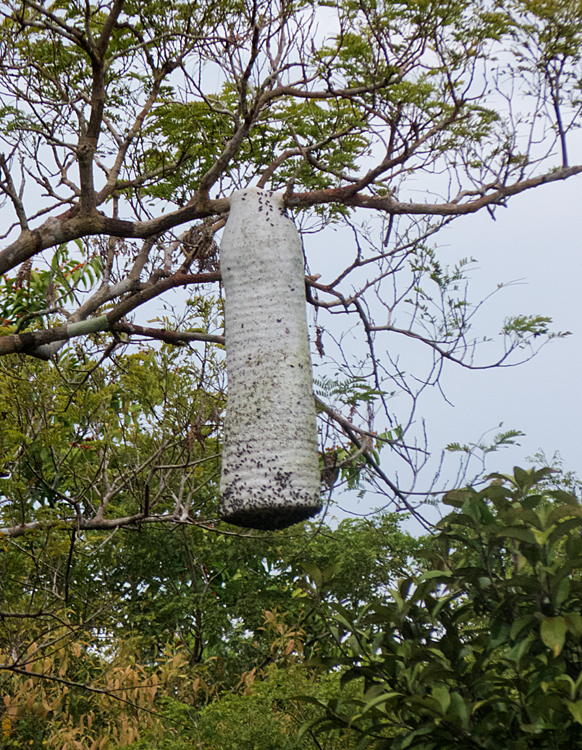 We went back to the village to visit the local shaman. He is a walking talking pharmacy. With our guide Cesar as interpreter we ask him many questions.

Ayahuasca is a brew of various psychedelic plant infusions that is used for spiritual and healing purposes by the native people of Peru. Like most psychedelics it reportedly opens the doors between this world and the world of spirit. On an ayahuasca journey one may learn of the spiritual nature of life, or of one’s true purpose, or of much that is not seen or known in every-day reality. Perception expands beyond the ordinary. I asked the shaman what he had seen and learned on his own ayahuasca journeys and he replied that he had learned about the medicinal properties of the plants of the jungle, to diagnose illnesses, and to understand which plants are needed for healing.

Early in the meeting, as we asked questions, he suddenly jumped up and went to get his medicine bag. He had fifteen bottles, each with a different plant or mix of plants, held in alcohol for preservation. There are over two thousand medicinal plants in the Amazon. He generally uses about one hundred of them. He explained the contents of each bottle – something for digestion, something for arthritis, something for female fertility, something for headaches, something for everything. He is the local doctor, bright and animated and passionate and extremely knowledgeable. We never did find out what the bunch of dried leaves is for. Or the hand-rolled ‘cigarettes’. Or the piece of wood. Or the stones. Or the matches. I imagine he’s danced a few wild dances in his time.

From the Research Centre we went to a large lagoon. A lone local fisherman came over to show us his catch. In his dugout behind him you can see a small part of his quite considerable haul for the day. In front of him is an electric eel, which he was careful not to touch. He brought it over for us to see it, and would later release it. Not surprisingly there is a taboo against eating electric eel. I love the clutter in his ragged boat. I love how completely at home he is in his environment.

He also showed us this aptly named vampire fish, 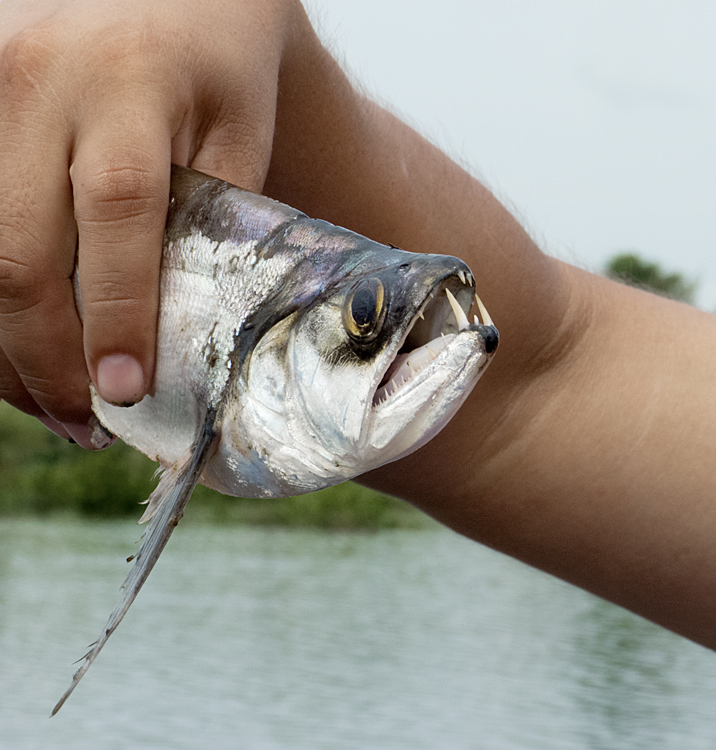 and this piranha with its razor sharp teeth. The Indians used the teeth from a piranha to sharpen the darts for their blowguns.

After this fishy show-and-tell we all dived in the warm-cool water and went swimming.

It was glorious. But the best part was the dolphins. They are an ancient species of river-dwelling toothed whale. During the dry season they live in the Amazon, during the wet they spread out wherever the water takes them. They range in colour from white to grey to vivid pink. To the people of the Amazon pink river dolphins are “boto” – shape-shifters that on the wings of your desire will steal your soul and take it to “encante”, an enchanted underwater world. And then we saw them. They were not close, but close enough to watch them breaching and to see their pink bellies. There is a reason they are called encantados, the enchanted ones. Just seeing them, and swimming in the same water was pure magic.

The humidity high, the damp relentless, the air, our bodies, our clothes, dripping and sticky. Even clean clothes are clammy. Cold showers bring brief relief. I am covered in mosquito bites despite daily use of repellent and a net covering the bed. But the food is delicious. The company is fabulous. And every day is a feast for the senses, a discovery for the heart, a rich expedition to encounter the hidden secrets of the jungle. We wouldn’t have missed a second of it.

Paul Beaver’s Diary of an Amazon Jungle Guide. Paul is the founder of Tahuayo Lodge and the Tahuayo River Amazon Research Center. http://www.amazon.com/Diary-Amazon-Jungle-Guide-Encounters/dp/0972480919