22-28 January 2013. We found a tour company offering day trips to Phou Khao Khouay National Park for $160 each. So we walked into a travel agent chosen at random, by good luck or by good intuition, (I sometimes wonder if there is a difference) and organized our own guide for less than half the price. We were lucky beyond measure once again. It was just the two of us with a wonderful French man called Albin, who had been living and working in Laos up north in Luang Prabang. I can’t now remember why he’d come to Vientiane. He’s a botanist with a specialty in ferns, and an enormous knowledge of the Lao bush. When we got to the park, an hour or so outside Vientiane, we were joined by two Lao men, one of whom was an official park guide and required by law to be with us.

I think the park guide was a shaman, and the other his apprentice. And Albin wasn’t too shabby either. We hiked and hiked and hiked for hours, stopping frequently as one or other of them would suddenly duck behind a tree, or step off to one side, and point out something of interest. How did they know how to find them? Orchids orchids orchids. Never have I seen so many wild orchids, and so many varieties. We would not have seen any of them if we’d been alone. They are frequently very small, and shy, and even the bigger one was not directly on the path but hidden in the bush. Our guides were magic, all three of them.

The most magnificent of all was found right near the end of our hike.

We had no idea, but the park guides had been carrying this entire lunch for the five of us in their packs. Front left is egg, front right is pork, behind the pork is stir-fried vegetables, and next to them some horrendously spicy stuff we didn’t go near. It’s all repeated behind, and there are also four baskets of sticky rice. It was all very good. It was a very typical Lao meal. Well partly  . . . . . . . .

These are little creatures. Initially there were many of them all clumped together and we thought it was a puffball, or flower, or lichen or something. Then Albin just gently touched it with a little twig and they started jumping all over the place. Aren’t they extraordinary? 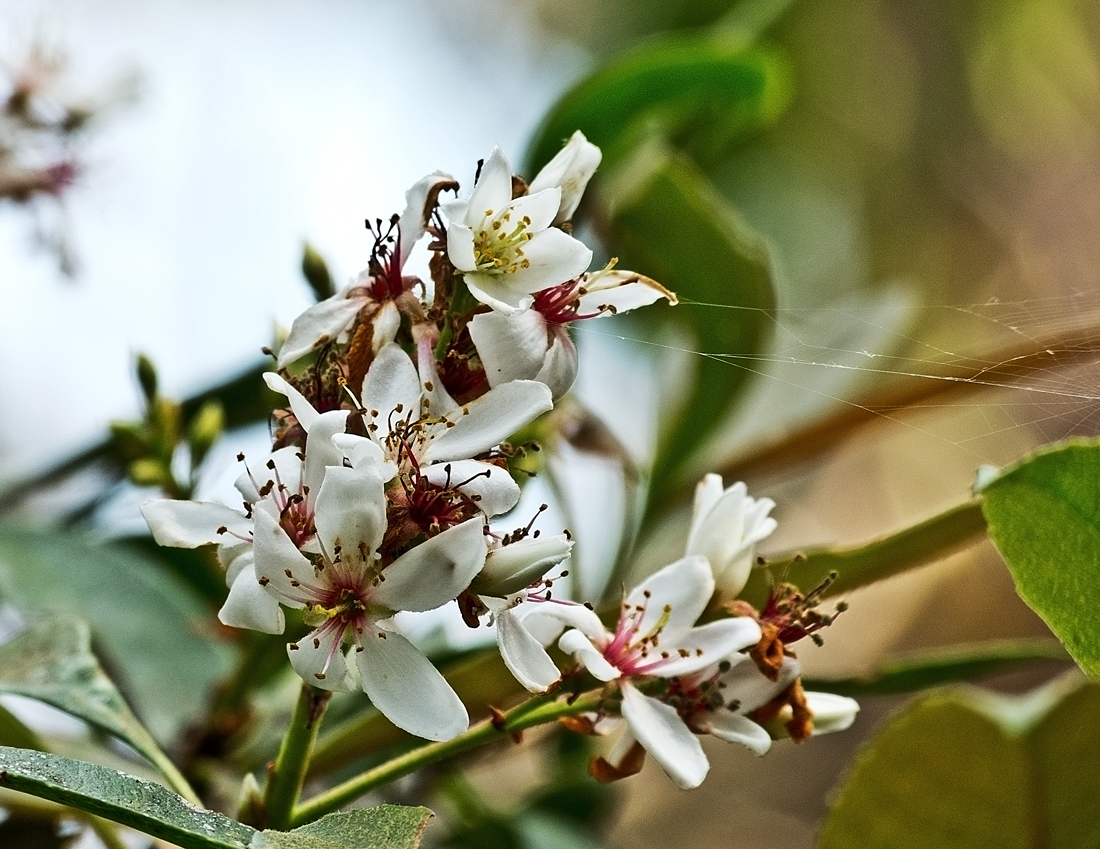 Another day, another excursion. This time we visited a Hmong village. I was remembering the Hmong from up north in Vietnam in and around Sapa, where they still live a traditional, if tough, subsistence life, mainly growing rice, and maintaining their traditional ways, and dress. It is not put on for the tourists, but is simply how they live, though some of them do supplement their income selling their handicrafts and hiking tours to tourists. There are some photos in this post: https://alisonanddon.wordpress.com/2010/05/11/west-australia-vietnam/

It’s not like that in Laos, at least not near Vientiane. Later on, in Luang Prabang, we were told that if we wanted to see tribal life still practiced in the old ways we’d have to go far north in Laos, just as we did in Vietnam. Most people who live in the village we visited near Vientiane live in homes with woven bamboo walls and thatch roofs, though a few, presumably wealthier people have regular homes. Pretty much everyone has a satellite dish, and probably a cell phone too, plus a tractor and/or a motorbike. 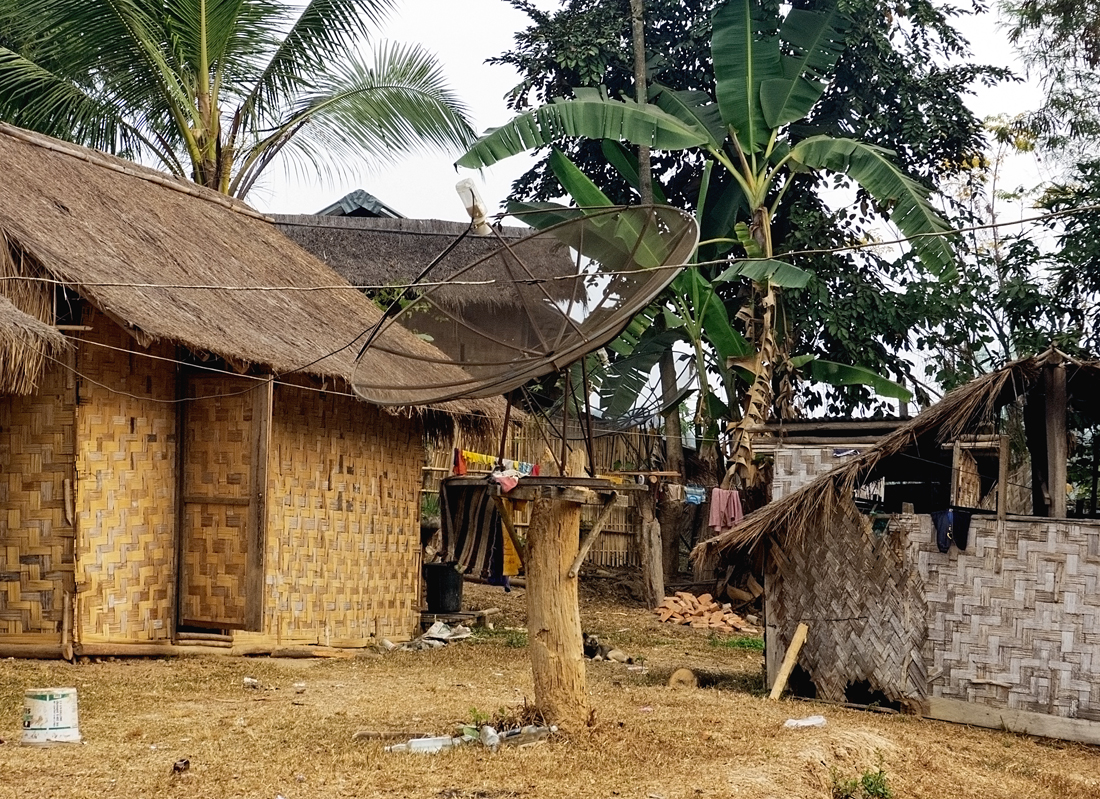 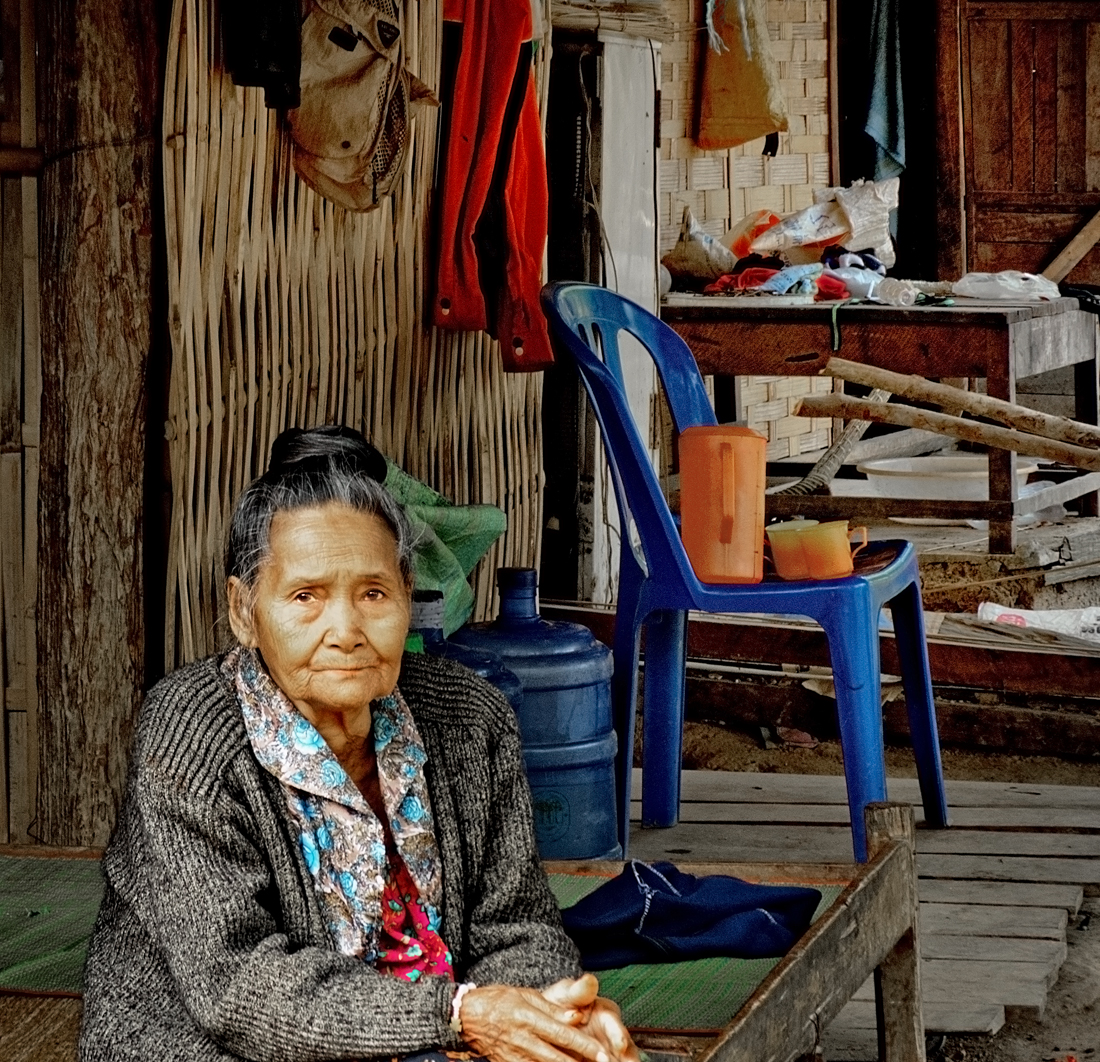 We visited the Ban Keun salt works. Saline water is pumped from underground, boiled, steamed, and then spread out to dry. It’s incredibly hot and steamy work for very little money. The children that greeted us were an apparently happy bunch of ragamuffins, the adults probably not so much. The whole enterprise was fascinating.

A short way out of Vientiane we visited two markets, one large and under cover, the other at the side of the road. Both markets had a plentiful supply of fruits, vegetables, fish and chicken for sale. Albin told us that there’s very little wildlife in Laos because it is all hunted for food even though it’s illegal to do so. Laos is one of the poorest countries in the world. Add to that the fact that the USA, in secret, dropped one hundred bombs on Laos, every eight minutes, day and night for nine years, from 1964 to 1973. A hundred bombs. Every eight minutes. For nine years. It’s barely comprehensible. Because of that, much land that could be farmed is unsafe. The Lao, like human beings everywhere, do what they need to do to survive. So they also eat insects, rats, bats, native birds, and many things people in richer countries find utterly stomach-churning. We do too – find it stomach-churning, if completely understandable. If you’re raised eating roast insects, grubs, and any kind of meat that’s available you presumably think little of it as an adult. In the big market two different vendors each quickly covered a large furred animal, about cat-size but not cats, when they saw our cameras coming. The people at the roadside market appeared to have no such qualms even though they seemed to be selling similar animals. 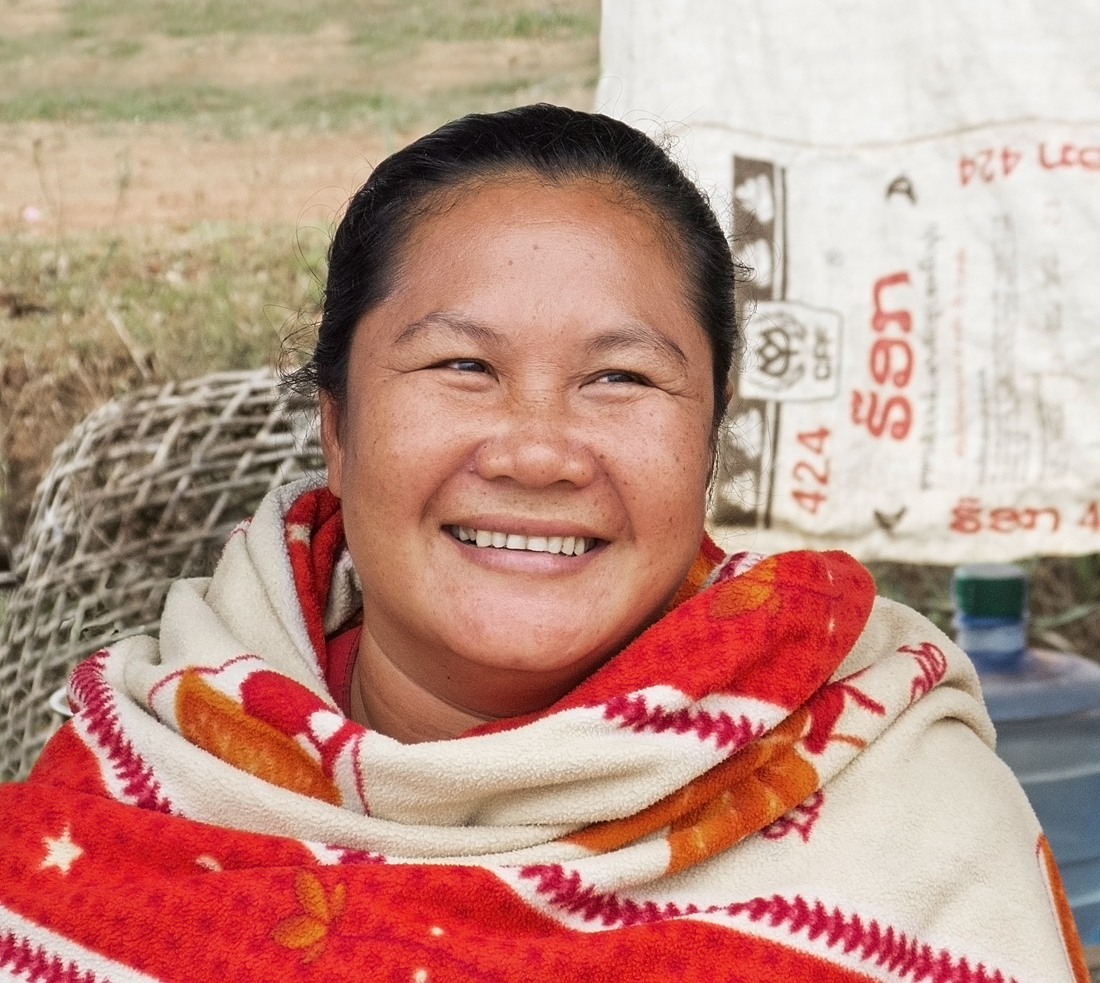 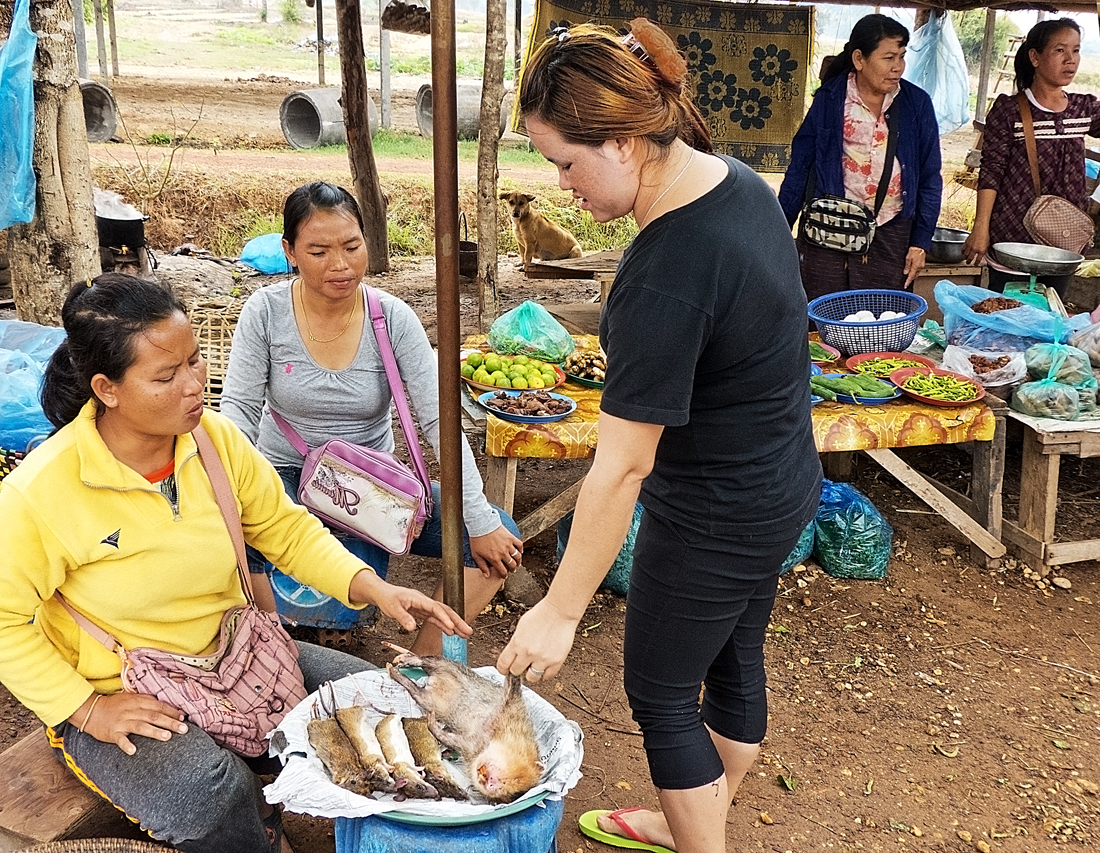 Even the colourful native birds are not spared

The whole experience was eye-opening to say the least, and, yes, fascinating. I could see that what was so exotic, and disturbing, for us was just plain normal for them. All the people we saw, both selling and buying, were just ordinary folk living their lives the best they know how.

Well didn’t this post start off real pretty and end up all gruesome!

Next post: From Vientiane we travelled by minivan to Vang Vieng, a journey that had me shrieking at the driver, and from Vang Vieng by bus to Luang Prabang.

31 thoughts on “Beauty and the Beast: the orchids and rodents of Laos”