As I write we are on a train heading from Jaipur to Jodhpur. We were up at five to leave for the station for a 6.30 departure. Travelling can be rough at times. None of us have had enough sleep. I’ve got mild bronchitis, the result, I think, of Delhi smog and stressing over keeping up to date with the blog (something I’ve finally come to accept is impossible), Don and Julie have both had tummy troubles on and off, and I’ve twisted my foot pretty bad on the uneven sidewalk, enough to make it swollen and limp-worthy. And yet – all is well. There’s a sense of peace, and rest, at the moment. Indian trains are grotty, even in first class, yet we have enough bedding and pillows to be wonderfully comfortable. Don is napping. Julie has been watching a movie on her laptop, and is now also napping. I’ve been editing photos, meditating, and drifting by with the scenery. Now I too will nap. Blessed and lucky to be having this journey. All the little things don’t matter. All is well.

Some final stories about our time in Delhi:

There is a foundation called Salaam Balak that is devoted to the rescue of Delhi street children. Many have run away from home because they are abused, or there’s not enough money to support everyone in the family, or simply because they have dreams of making it big in the big city, or in Bollywood.

Salaam Balak has three shelters for boys and two for girls. When they connect with a child the first thing they do is try to find the parents. If the child is unwilling to go home the next thing they do is have the child entered into rehab for six months – almost all are addicted to glue sniffing. Then they come to live in the shelters where they are given housing, food, education and a daily structure. Many go on to have successful lives.

One of the ways that has been developed to raise money for the foundation is street tours of Old Delhi led by some of the older (17-18 year old) children, who show us some of the streets where the children live, and tell us about their lives, and the activities of the foundation. Street kids get money by collecting cans, plastic bottles, and paper and taking it to recycling depots, and probably also by other more nefarious means. They spend it on glue and watching movies. Food is easy to get at various shelters around the city.
Some street scenes from our walk 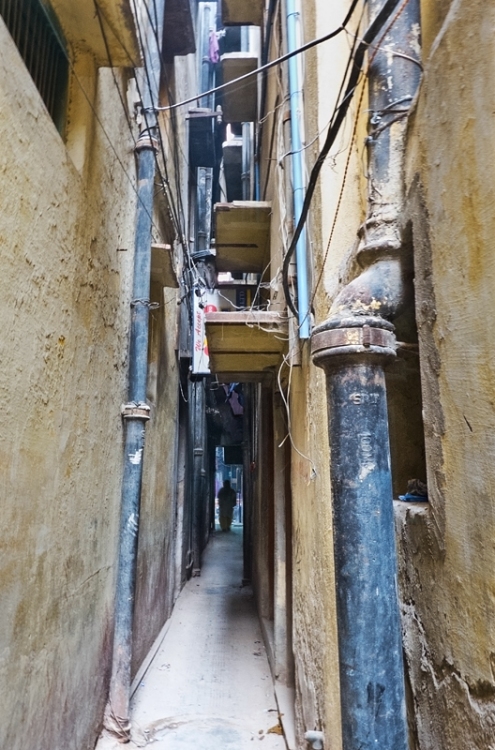 This colourful tile of the god Hanuman is one of many along the wall of the narrow alley shown above. Each tile depicts a saint or Hindu god – Sai Baba, Krishna, Ganesh, even Jesus is there. According to our guide it used to be a convenient place for men to duck into for a bathroom break. But now no-one would use it for that purpose in the face of all those saints.

And around the corner – the pottery sellers

One of Delhi’s crumbling havelis

The boys at the Salaam Balak shelter – so much fun to visit with them.

By complete contrast we also visited Jama Masjid, the biggest mosque in Delhi. It was the only time we were harangued and harrassed by a tuk tuk driver. He’d agreed to fifty rupees but when we arrived he insisted it was fifty each. He shouted at us in Hindi. We walked away. He shouted at some fellows sitting at the entrance to the mosque, who showed him no sympathy. We kept walking, and he shouted at us some more. I did start to get a bit nervous, but when he started shouting at someone who looked like a cop, or security guard and got no-where with him I knew we were in the clear. We were inside the mosque making our escape up the stairs and he was still shouting at us. The irony is I’d chosen him from several drivers because he’d been the least pushy. India almost always takes a certain strength and patience and tenaciousness. The thing is when people come up to you it’s sometimes hard to tell if they want to sell you something and will insist and insist hoping you’ll eventually cave, or if it’s a genuinely open-hearted person who just wants to help. I know there’s been times we’ve rebuffed some of the latter, as well as many of the former.

As we entered the mosque both Julie and I were given long robes to wear, despite our long sleeves, and pants. I think it was the pants on women that bothered them. Anyway we are bigger girls than we used to be. 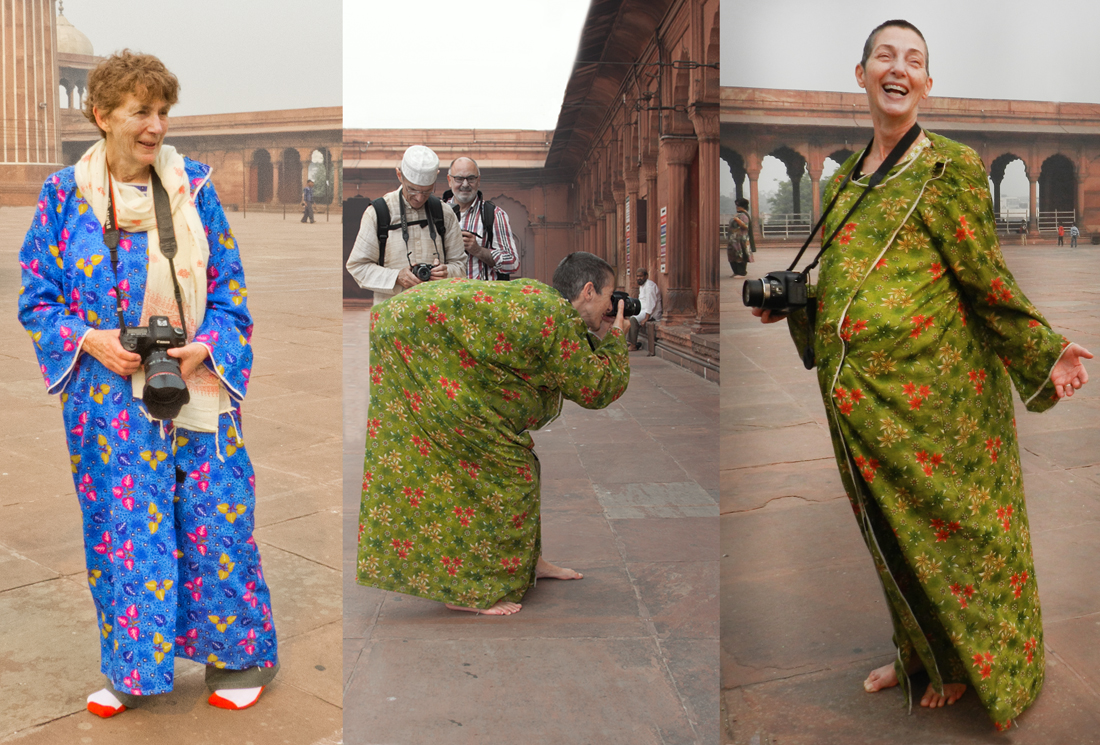 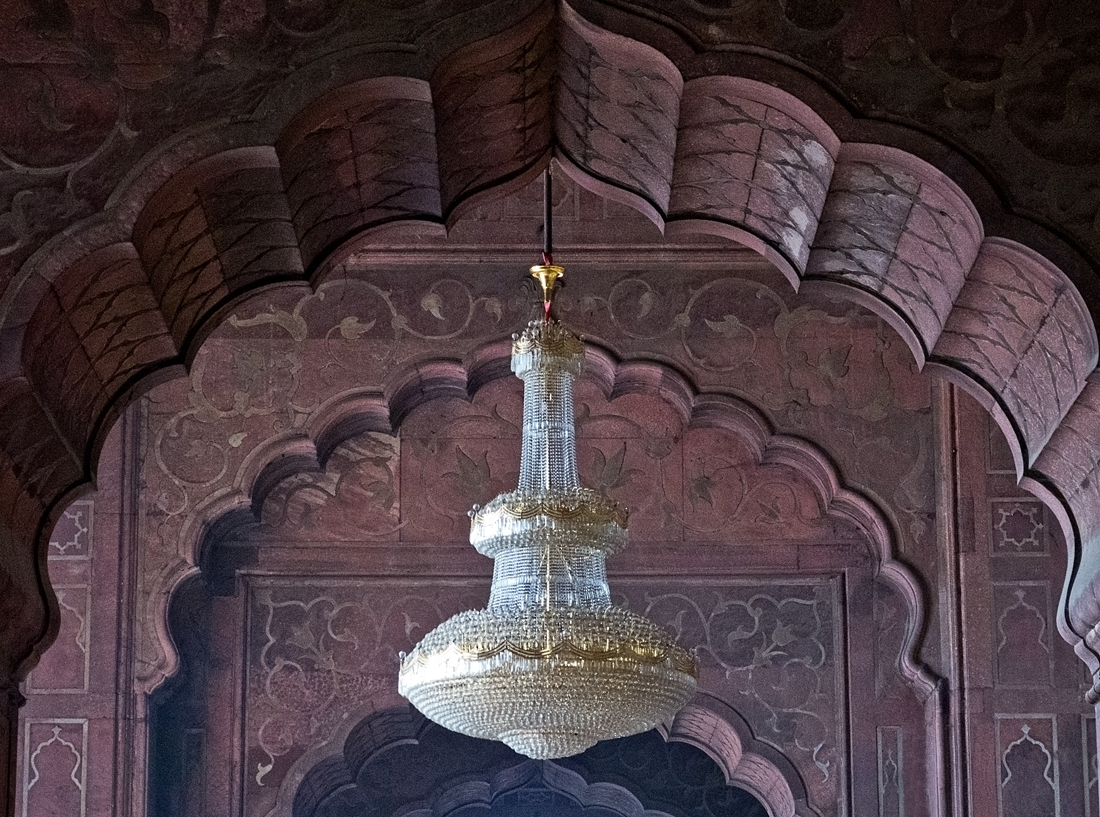 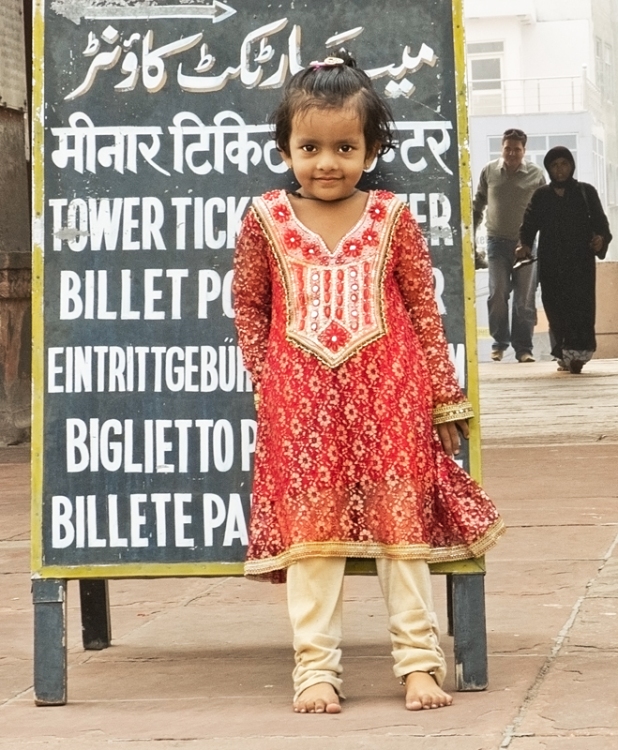 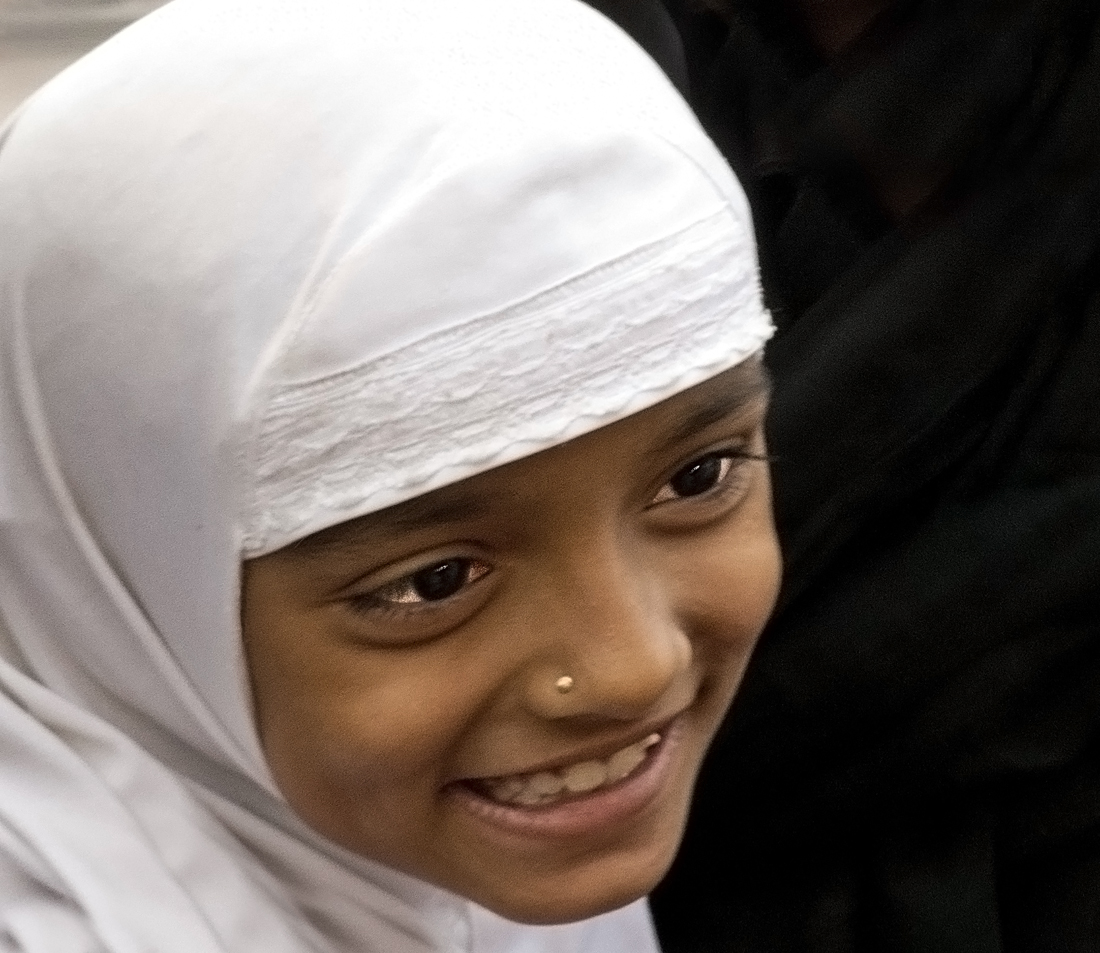 And at the market in front of the mosque

In another change of pace we visited Sarojini Market in one of the wealthier areas of the city. That didn’t make it any less crowded, busy, pushy, insistent or colourful. 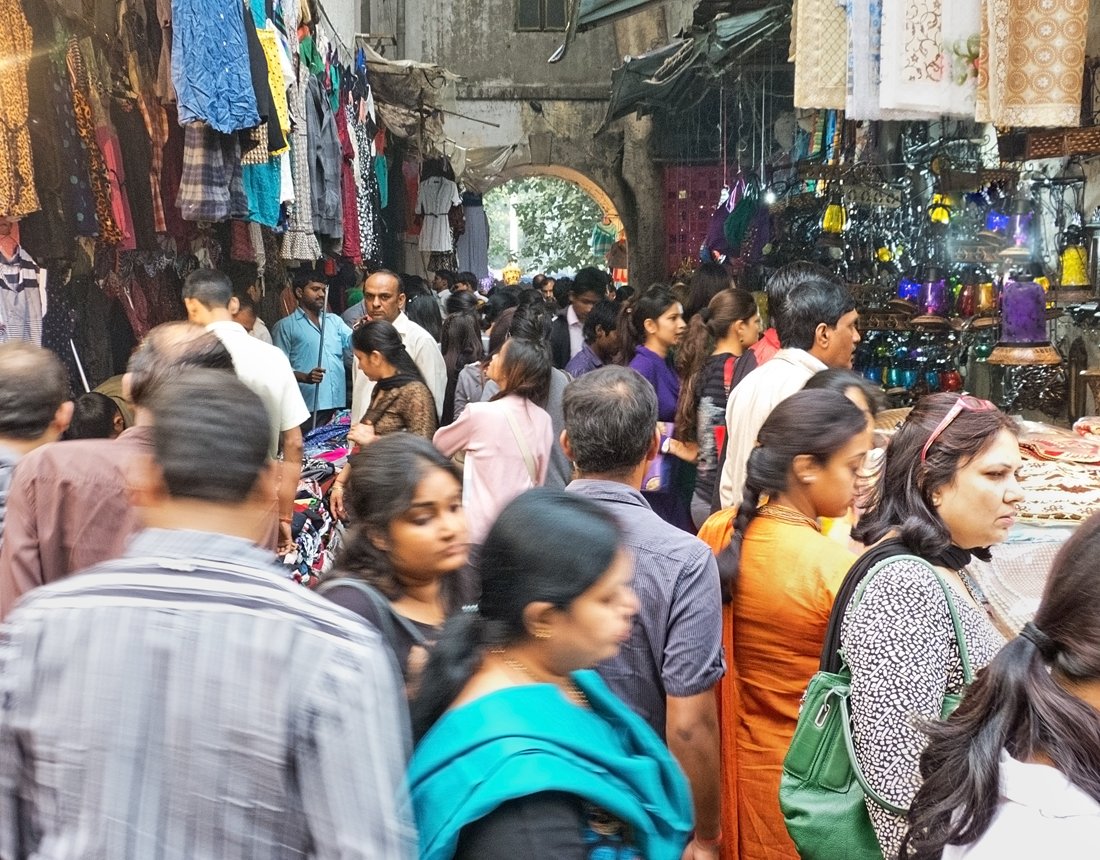