One morning on our way to sit in silence with Shiva Shakti Amma, one of our favourite teachers in Tiru, Don took a detour to use the bathrooms at Ramana Ashram. On the way he encountered, and photographed, a peacock in full courting dance display. I went that way the next morning and sure enough there he was, at it again. There were several hens around and he was showing off to all of them. Hey! Look at me! Am I not the most handsome and studliest guy of them all! Look at how fabulous I am! He didn’t seem to mind which of the hens he attracted. Whichever of them came closest got the full treatment. The rear brown feathers flap back and forth (I’m guessing for balance), he turns slowly in a circle, and every thirty to sixty seconds or so the entire fully expanded sheaf of feathers vibrates for several seconds. Just wow! I’m so glad I got to see that.

One of the largest and most important temples to Shiva in all of India is in Tiruvannamalai. When Suzanne was here she and I went to have a look at it, and later I went again with Don. To be honest none of us were overly impressed. It’s all grey stone and a bit grubby, and none of us really know enough about the Hindu religion to be able to appreciate the religious aspects of it, however the six towers are certainly impressive and quite beautiful, and the elephant was wonderful. Yes! A real elephant in the temple! We immediately fell in love with it! And if you put money in the end of its trunk it blesses you by bopping you on the head. It is clever enough to take both coins and paper money which it delivers to its keeper, and naturally it can tell the difference between money and food. Of course we had it bless us: me twice so Don could take a picture. 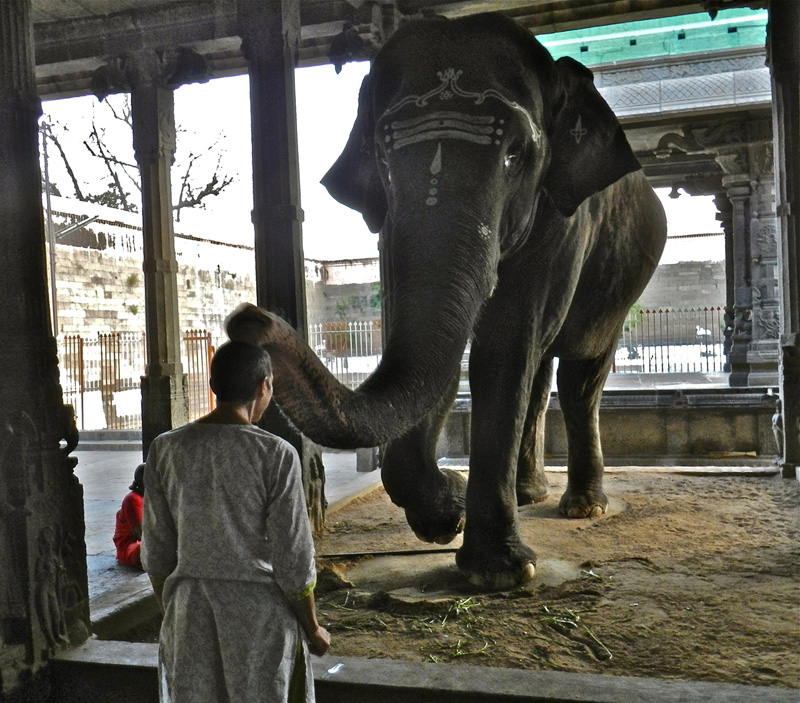 How many people can you get on a motorbike?ONE 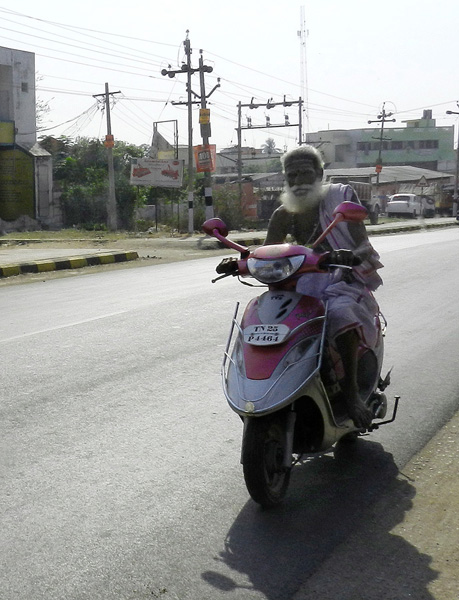 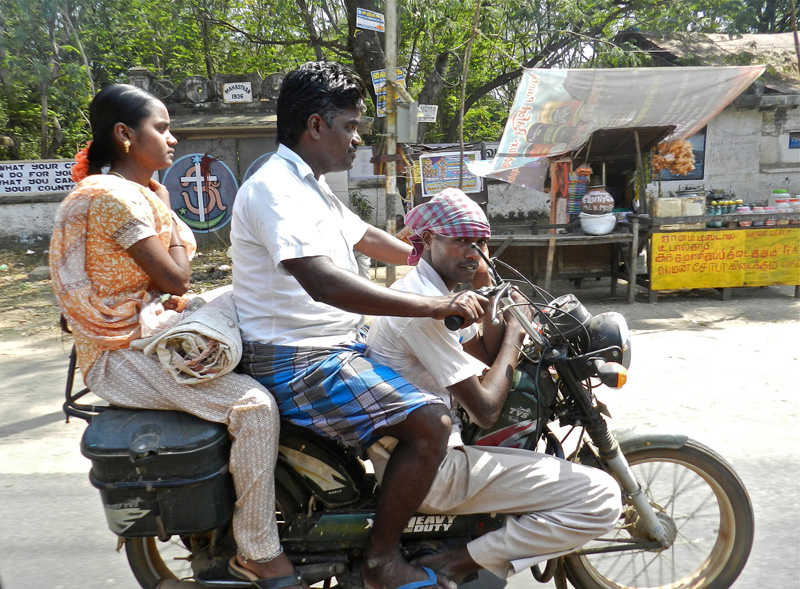 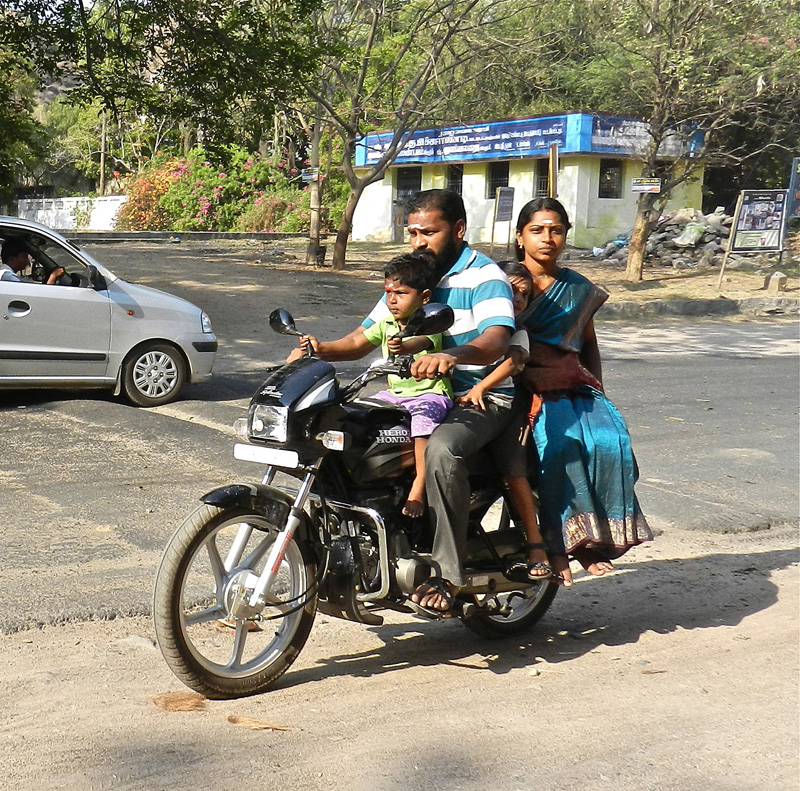 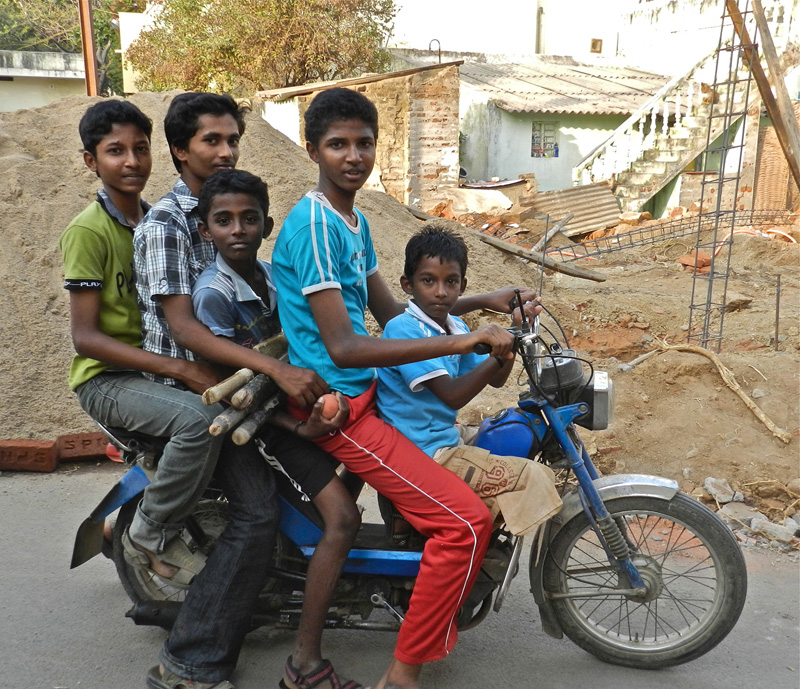 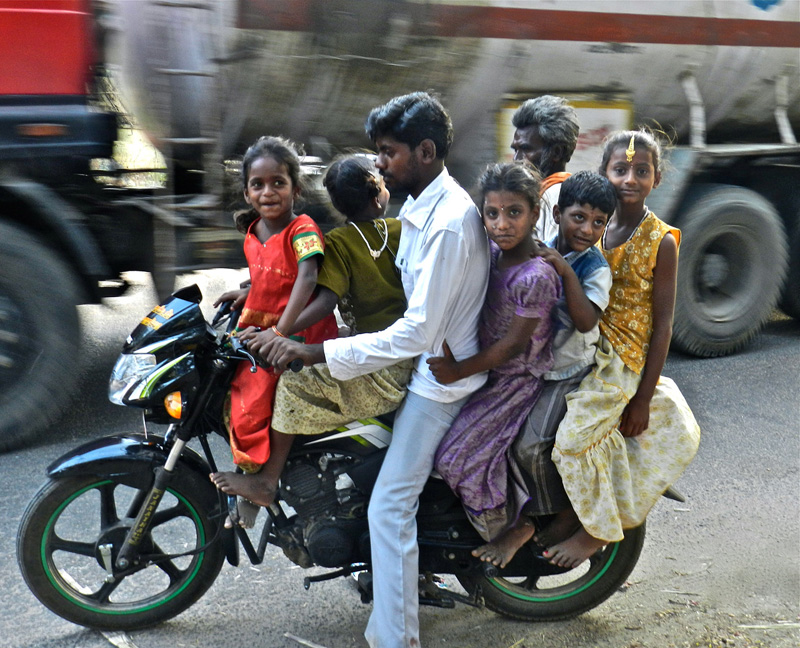 Ramana Ashram opened their new library building and had a concert in the atrium to celebrate. There was a wonderful dancer (who apparently is German) doing traditional Indian dance, and some fabulous western-influenced sitar and drum music. If you closed your eyes you could just about imagine Jimi Hendrix was playing the sitar. A truly cross-cultural evening.

Monkeys are clever: clever enough to turn on the tap when they want a drink. Don caught them at it. 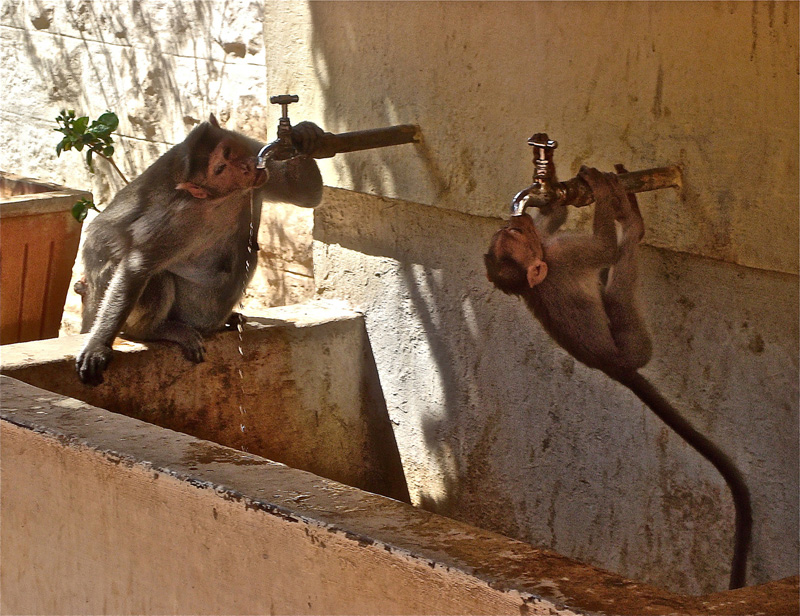 We stumbled upon the flower market! The entrance is through a tiny opening between two stores. I pointed at it and said to Don “I want to go down there” and there it was – lots of narrow alleys filled with the flower sellers, all of them delighted to have their picture taken amid lots of smiles and laughter. So much fun, and so colourful!

The entrance to the flower market: 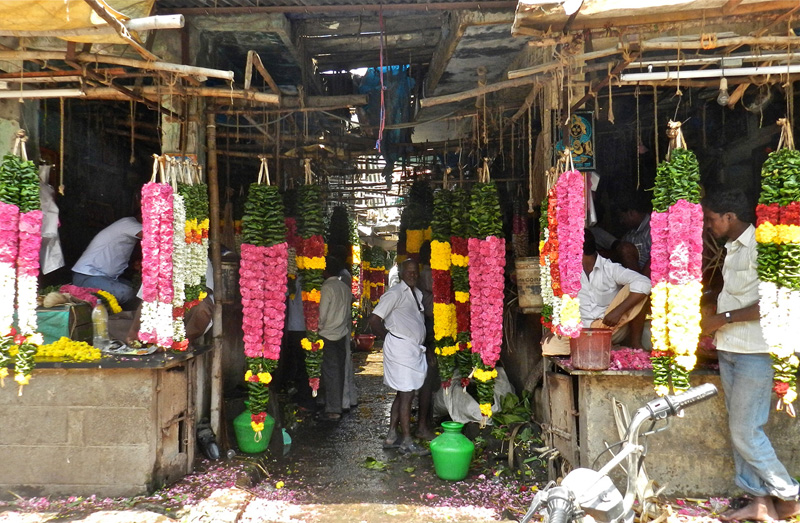 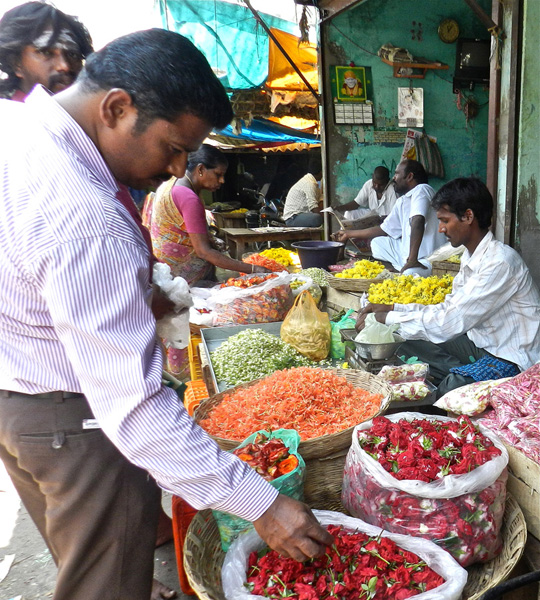 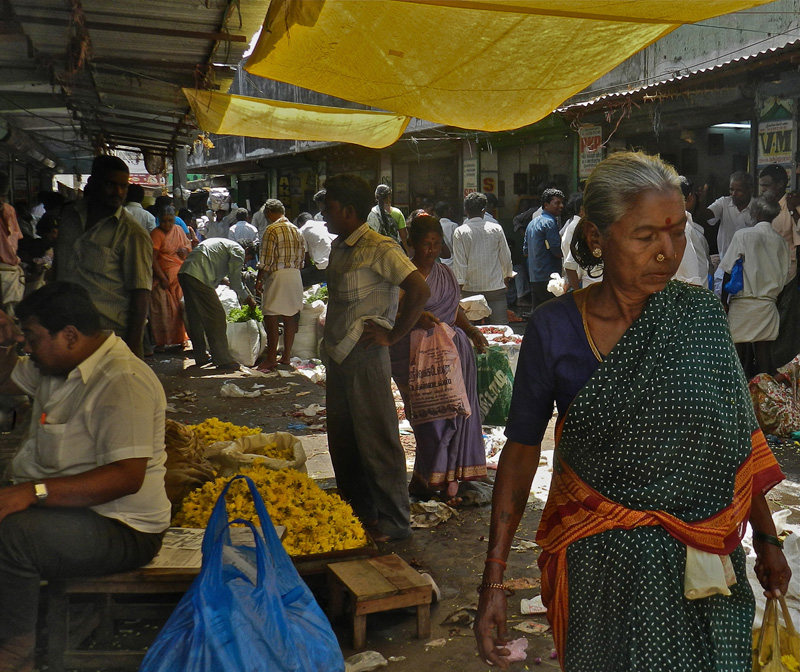 And so our sojourn in Tiruvannamalai came to an end. As I write this I am sitting out on the porch of our guesthouse room in Ubud, Bali looking out over a lush green rice field. We arrived a couple of days ago.

Our time in Tiru was amazing in so many ways and we are both changed because of it. Lots of letting go, lots of surrender to what is, lots of practicing presence, lots of meditation, and lots of openheartedness, interspersed with grumbling about the noise and the heat and the garbage and rumbling tummies. India is challenging in so many ways, and rewarding in so many. We never got tired of the beautiful bright saris the women wear, and the flowers in their hair. Never got tired of the openhearted smiling response to simply saying hello to people in the street. Never got tired of satsang with some wonderful spiritual teachers. We made friends with Ramesh, our favourite rickshaw driver. What a lovely man. We made friends with fellow Canadians Jackie and David, who we hope to see again in Vancouver. Had wonderful times with Ram and Bhakti, and with their friends Susan and Murray – all four of them old hands at living in India. And as I look back through all the photographs I took I’m reminded of what an amazing and fabulous experience it was. It was an extraordinary time, and affected us both deeply. I think it will take us a while to digest it all, and maybe even years to truly embody the affect it has had on us. Don said that if he had known beforehand all the things he was going to have to go through he wouldn’t have gone, but now, having had the experience he says he wouldn’t have missed it for anything. He especially appreciates the multitude of opportunities presented to practice open heartedness. As for me, I wouldn’t have missed it for anything either. More presence. More peace. More acceptance of what is. More joy.

And some final favourite photos: 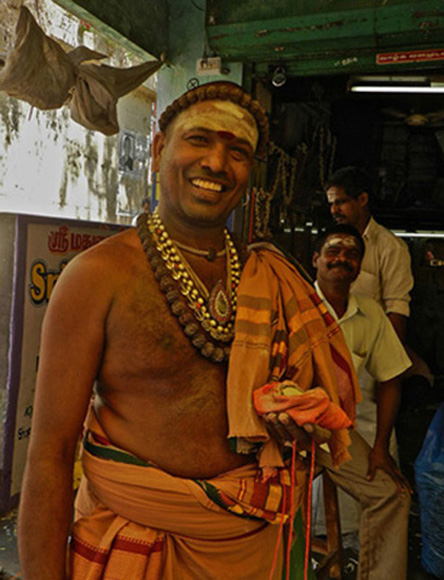 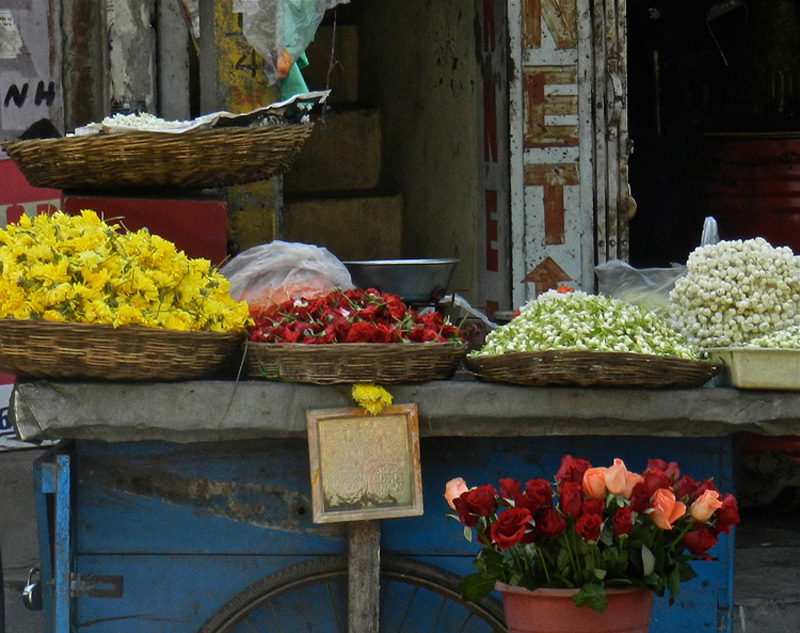 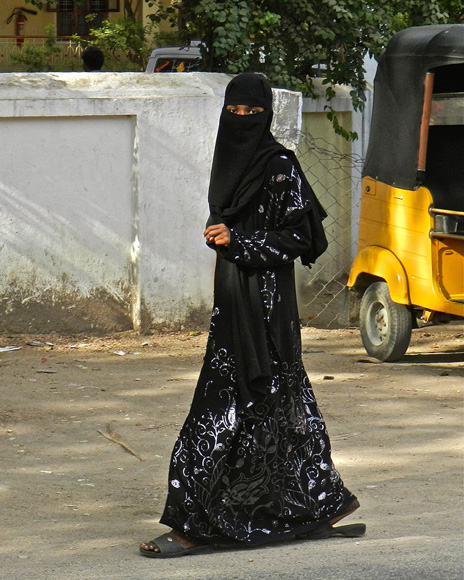 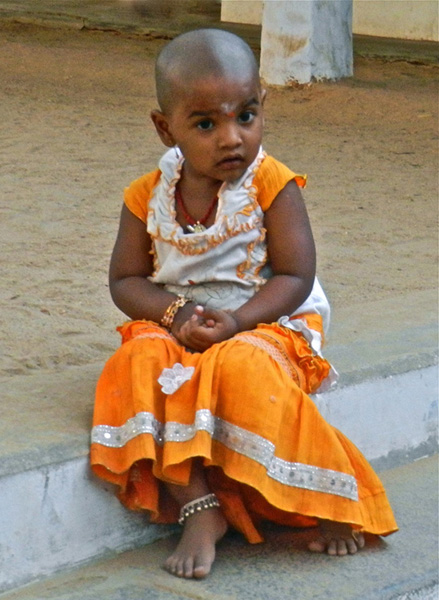 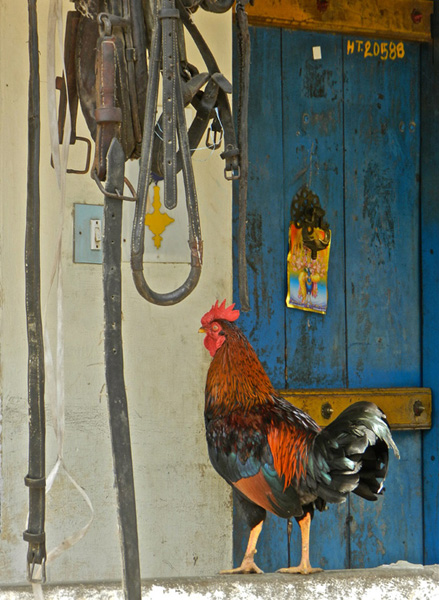 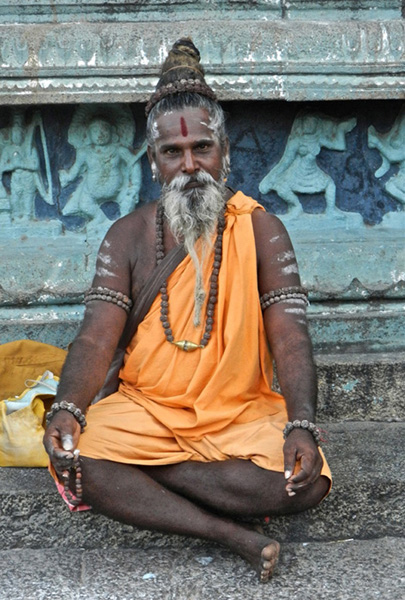 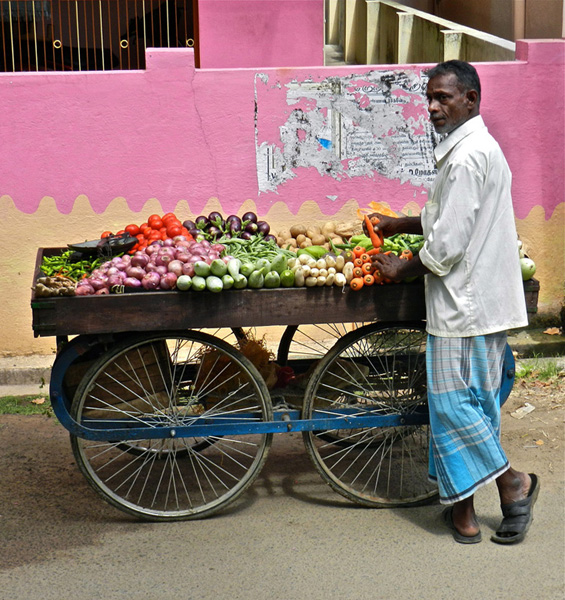