Five tiny villages clinging to the steep coast of north-western Italy, the Italian Riviera, and in late September/early October the weather is glorious, about 27-30 during the day and warm overnight. All of the five villages and surrounding area form the Cinque Terre National Park. It’s a UNESCO World Heritage site, and very few cars are allowed in any of the towns.

We stayed in Monterosso, the most northern of the towns, in an ordinary hotel, with an adequate room, up three flights of stairs. Nevertheless this is the view from the breakfast terrace. 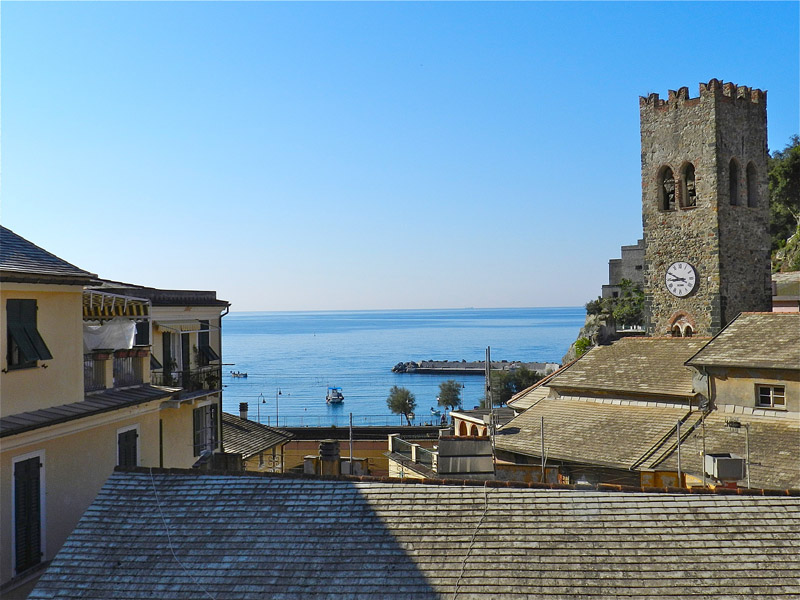 On our second day here our friend Ruth joined us from the Netherlands. Don and Ruth swam just about every day. Sometimes I watched them, sometimes I napped or wrote instead. We walked a lot. There are trails winding around the coast connecting the towns. We hiked from Monterosso to Vernazza, taking about 2 hours, explored the town, had lunch, and then caught the ferry back, a short ride over calm sparkling blue seas. And that night had a fabulous dinner of seafood risotto with mussels and langoustines, and local wine, and tiramisu and profiteroles to die for. 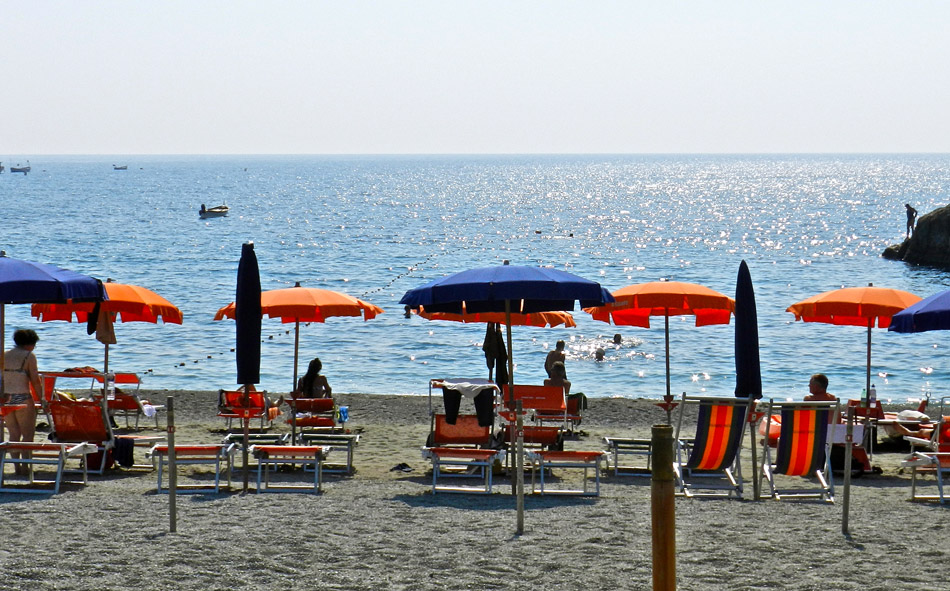 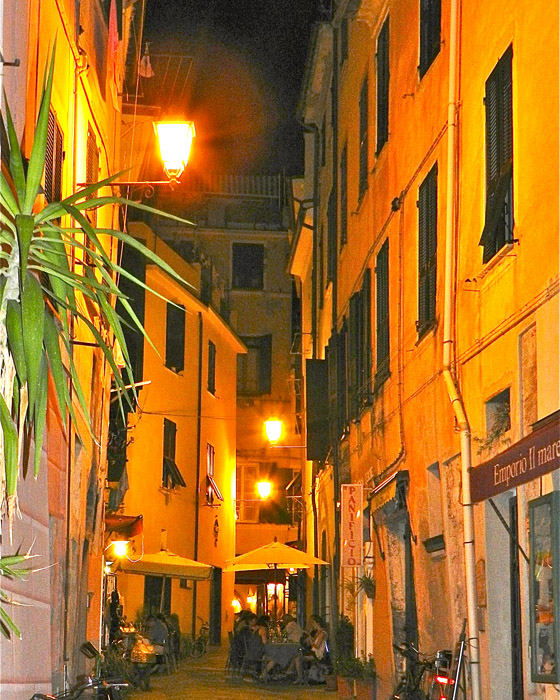 A two hour hike up and down, and amongst the olive trees and grape vines brought us to the next village: 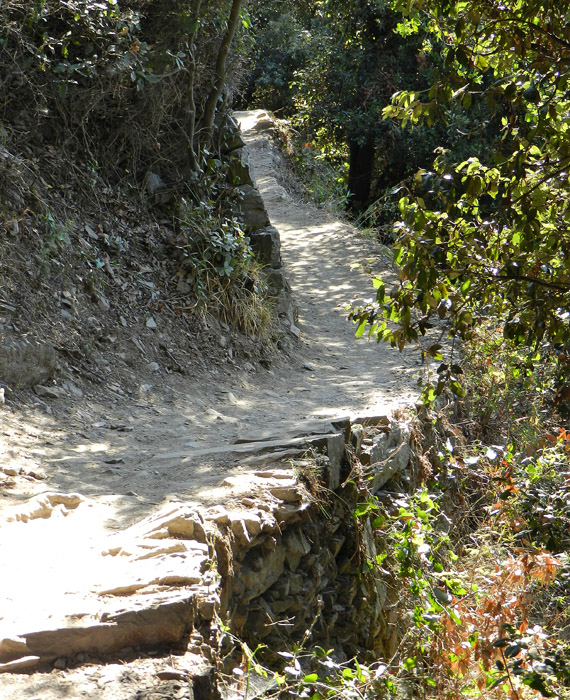 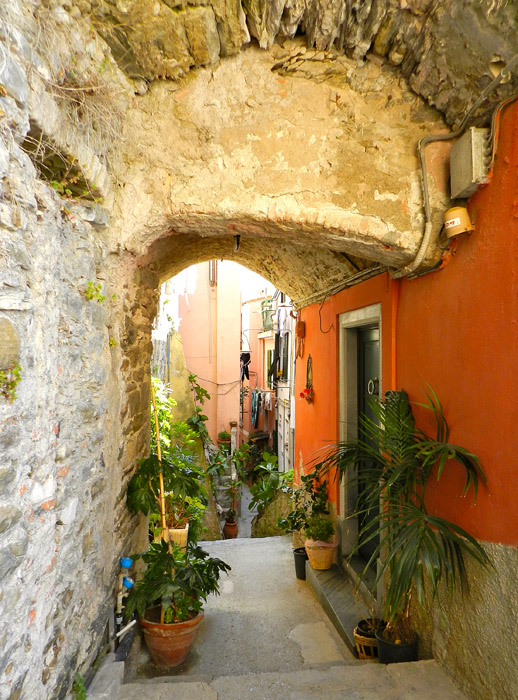 The next day we got the ferry all the way south to Riomaggiore, the most southern of the towns, and possibly the most charming, though all of them are wonderful. There is such a sense of authenticity about them. These villages have been here for centuries and have grown in a completely organic way as people carved their homes from the rocks and a living from the sea. Now they also make a living from tourism. Cinque Terre is full with tourists from all over the world. The thing about going to places where there are lots of tourists is that there’s usually a reason for it, and Cinque Terre is no exception. If you want to see the best places at the best time of the year it’s safe to expect that many others do too. The place feels crowded and alive and prosperous.

After exploring Riomaggiore we walked to Manarola, an easy 20 minute stroll along a flat walkway. 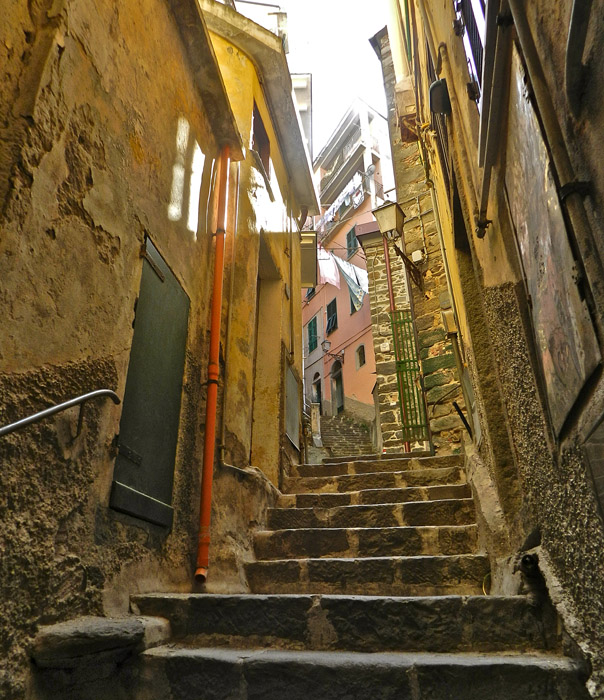 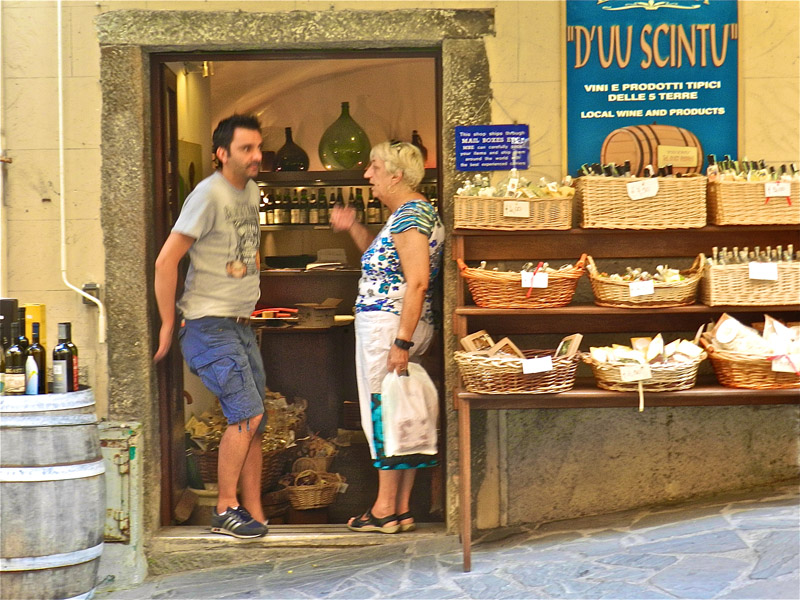 We stopped to explore Manarola and had lunch there before setting off on a three hour hike to Corniglia. I had tomatoes on bruschetta and it was wonderful, though I must say the bread served at most of the places we’ve eaten has been uninspiring. I’m not much of a foodie, but apart from the bread just about every meal has been fabulous. One night I had squid ink (black) tagliatelle with langoustines and thought I’d died and gone to heaven. And at least one gelato every day, but usually 2. An American woman I met on the Sestre Levanti railway station said “I feel as if I’m stuck in the eat part of Eat Pray Love”. It’s certainly easy here to get some really delicious meals, and we try many different places. 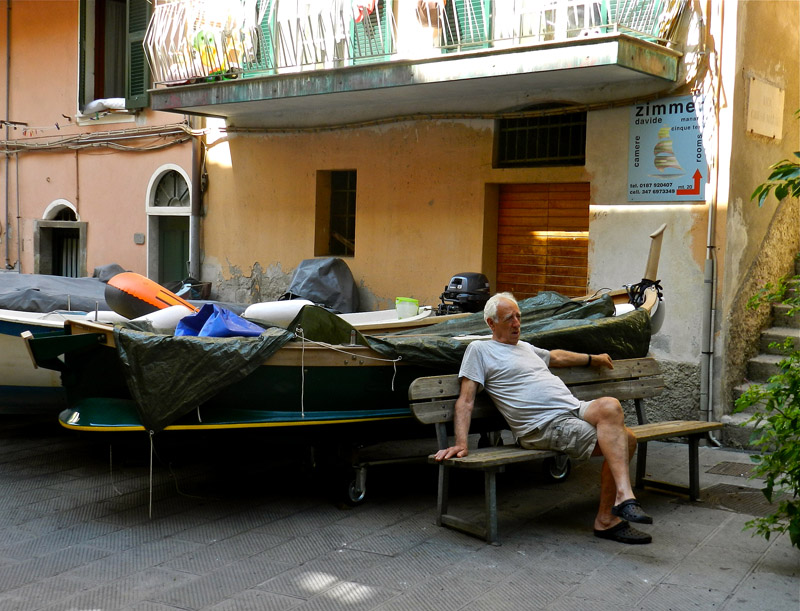 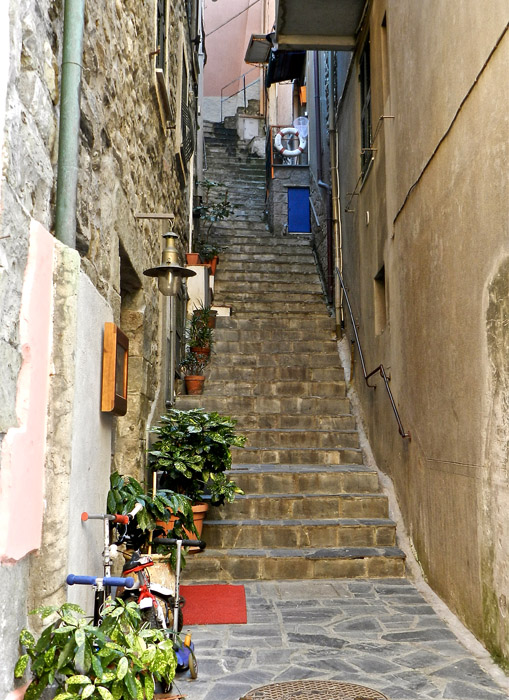 The path from Manarola to Corniglia is closed due to a land slide, so we chose to take the alternate route – a three hour hike up into the vine terraces and olive groves above the towns, and then back down into Corniglia. And now finally we were away from the crowds. There were other hikers, though not many, and we got to enjoy the beauty and silence of the area. It was hot and exhausting, but so worth it. 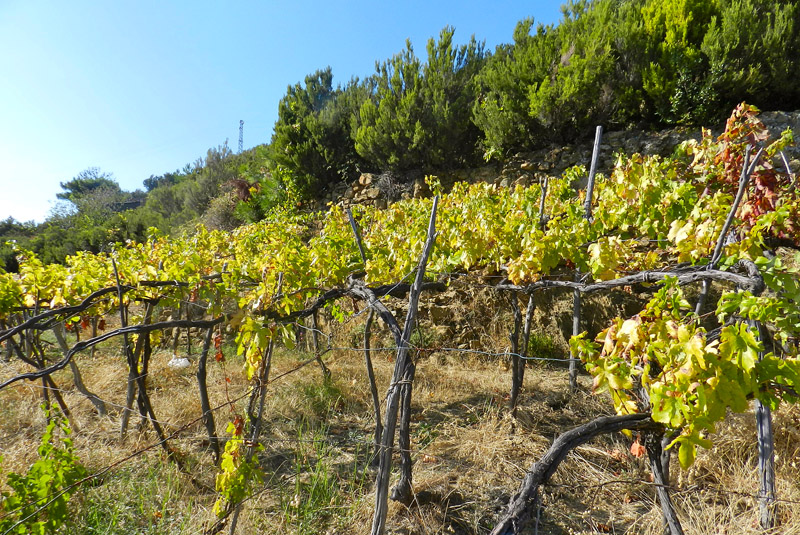 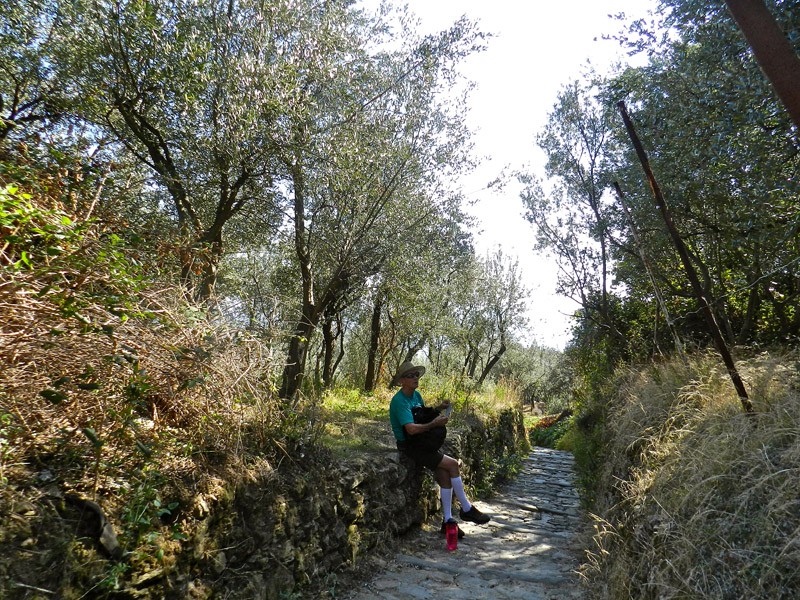 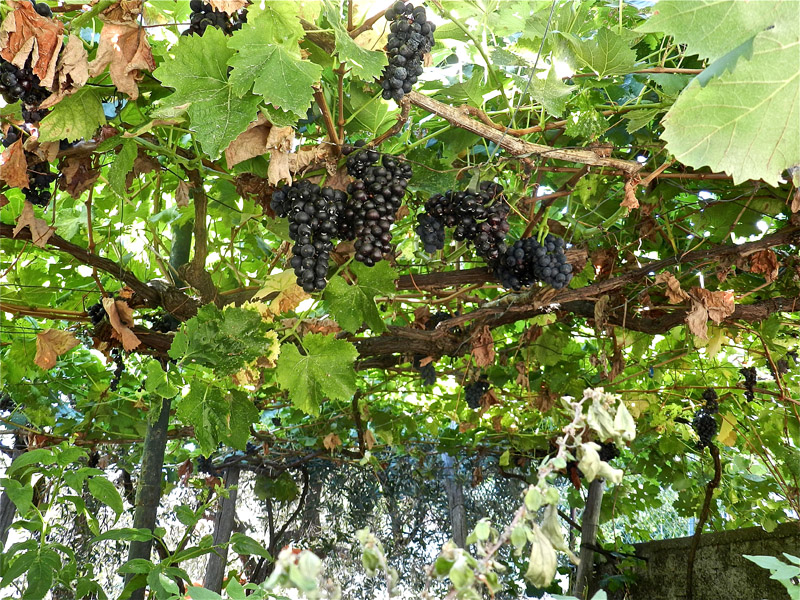 Cinque Terre is magical. I find it had to believe such a place exists. It’s so beautiful, and I continue to be awed and fascinated and inspired with the seemingly infinite variety of ways in which people live.

Now we have seen all five towns and hiked the trails between them all except the stretch from Vernazza to Corniglia, so for our last day in this part of Italy we decided to go to Santa Margherita Ligure and Portofino, two of the main Italian Riviera towns, and just a little north of Cinque Terre. We took a forty-five minute train ride to Santa Margherita and then walked the coast road to Portofino, which is apparently one of the haunts of the rich and famous. 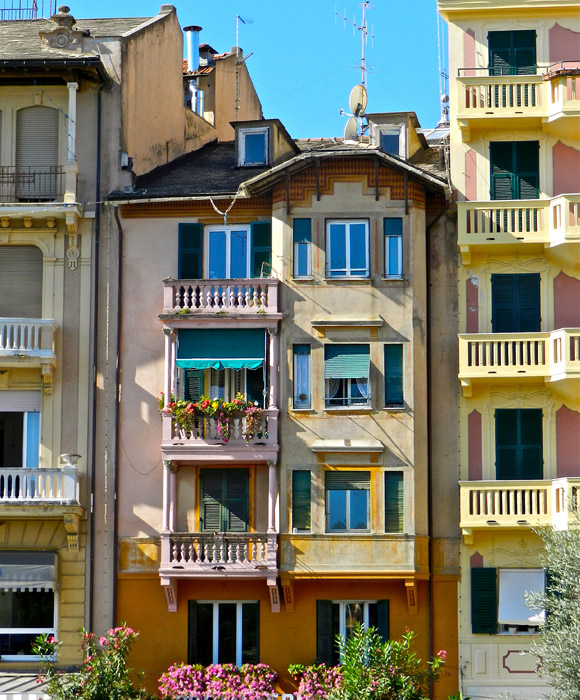 On the walk to Portofino 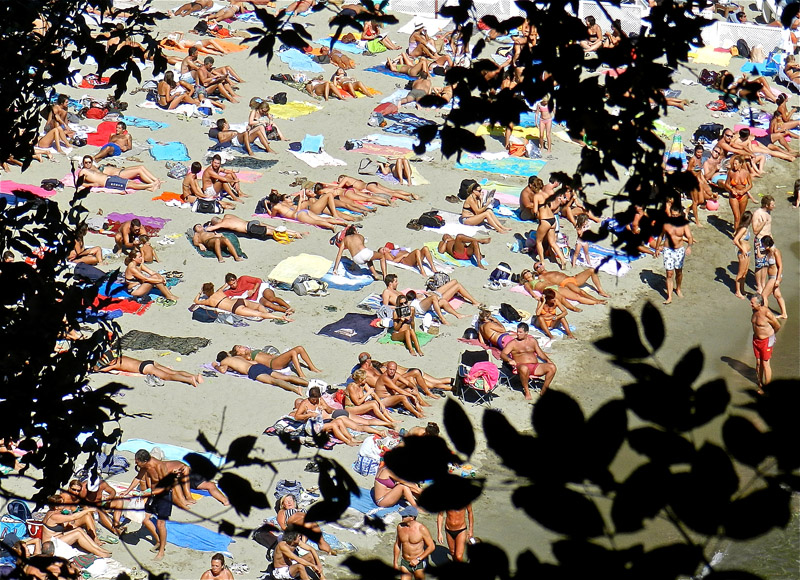 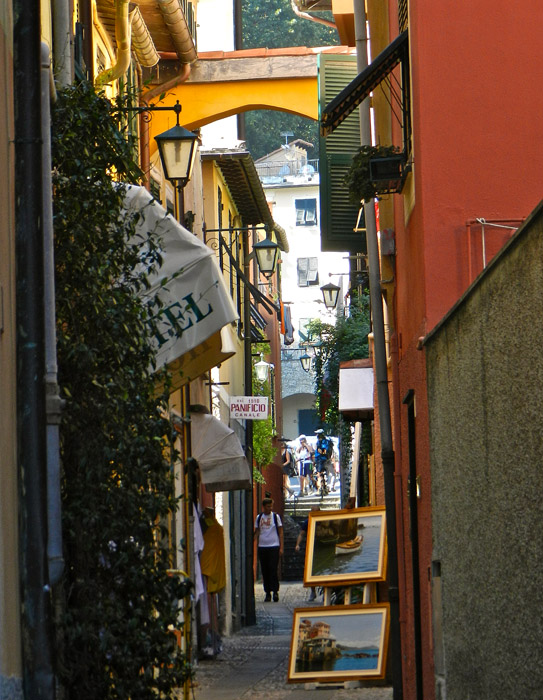 18 thoughts on “Five Colourful Cliff-Hangers: the beauty of Cinque Terre”