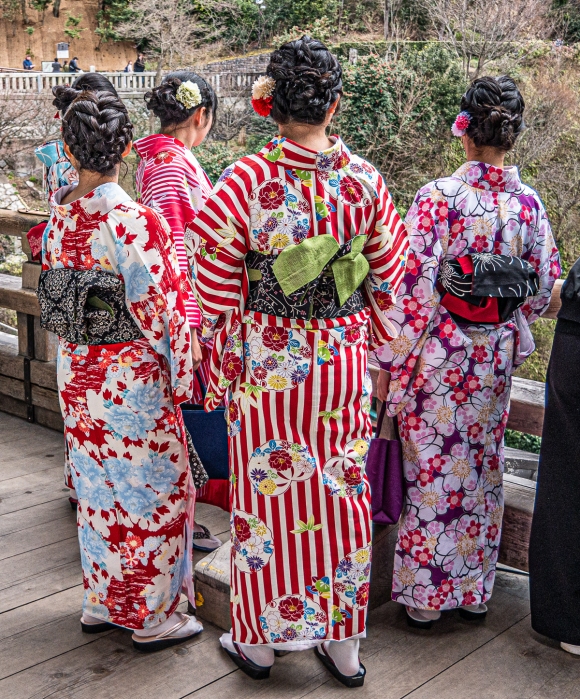 11-26 March 2019
After thirty hours of non-stop travel from Delhi we finally arrive at our Airbnb in the Gion neighbourhood of Kyoto. We’re brain-dead and hungry. It’s about 9pm local time and we need to eat. Walking the narrow streets of Gion

we’re feeling exhausted, a bit desperate, and not very hopeful since we’re clearly in a quiet residential neighbourhood far from tourist central in Higashiyama. But close to home we see a small pink sign propped on the ground at the entrance to a tiny alleyway: Romance Restaurant. English menu. We walk down the alley and open what seems to be the door to the restaurant. We’re looking straight into a living room. I don’t know who’s more shocked, us or the woman sitting there reading. Anyway, she directs us to the door immediately next to hers. Opening it we discover a tiny narrow space – a bar with seven seats. It is the best find in two weeks in Kyoto.

The owner has no English but we manage to communicate through our various translation devices. From the set menu Don chooses pork and I choose salmon but of course we swap half and half. We are given warm towels to wipe our hands to begin. Our meals come with miso soup loaded with tofu, a bowl of rice, a small dish of grilled eggplant, and a small dish of cold omelette pieces. The pork and salmon are served alongside leafy lettuce with a vinaigrette dressing and some noodles. All of it is delicious. We are given fresh towels again at the end. So gracious, so thoughtful. What a contrast to India! Thirteen nights in Kyoto and we eat at Romance Restaurant for ten of them. 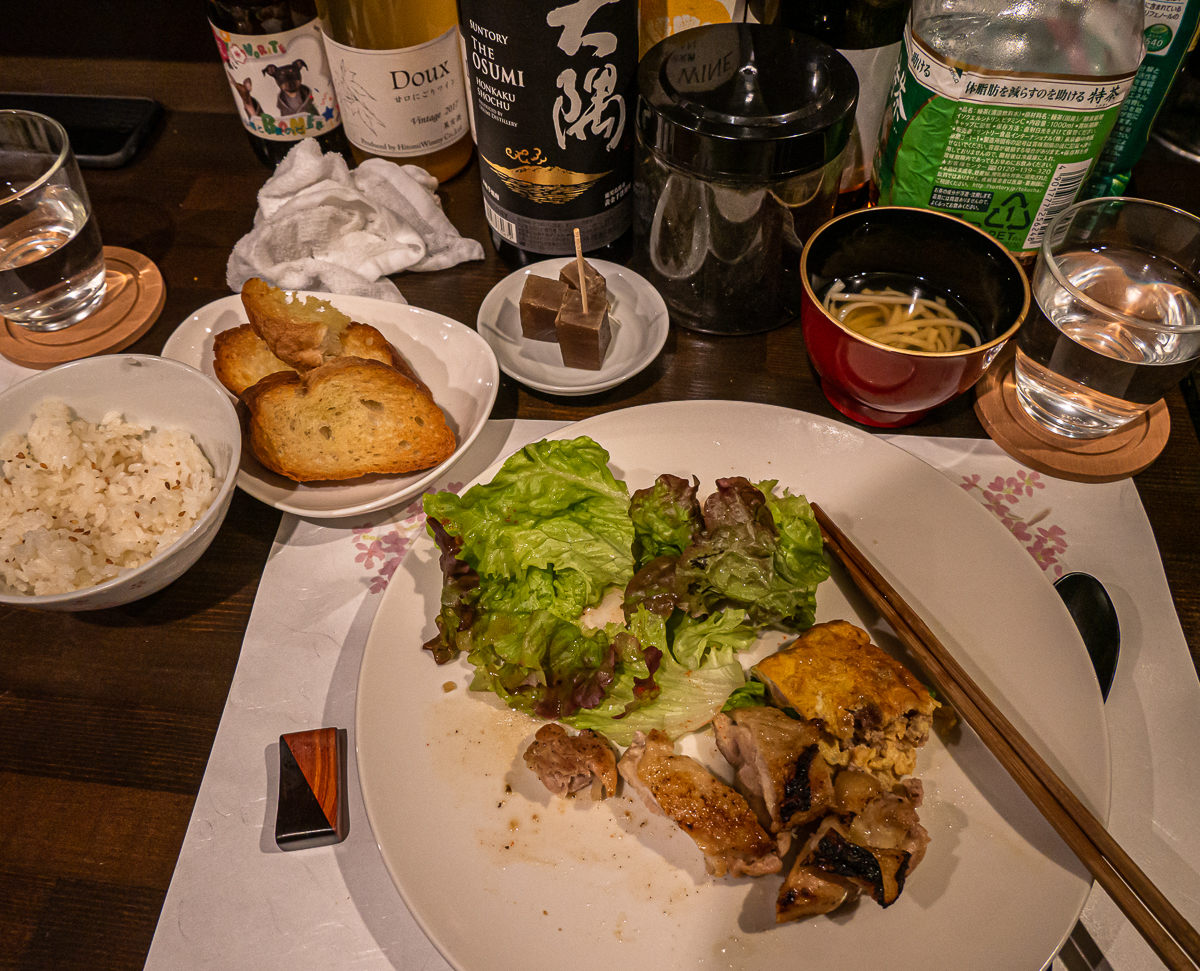 One night we’re at a festival at a temple so we eat street food, and one night we decide to go to a ramen place. Big mistake! It is a glutinous porridge, and so disappointing after the drool-worthy ramen I’d savoured on my previous trip to Japan. Even the sake didn’t help. We don’t eat at Romance on one other night because it is full with all seven seats taken so we walk a little further down the road. In an otherwise empty mom-and-pop restaurant, pop painstakingly and conscientiously makes us his special okonomiyaki, a kind of pancake that evolved in Osaka from the practice of cooking leftovers. He cooks at the table on a grill in front of us, moving with calm deliberation. No need to rush. Just a quiet focus to ensure everything is done right in that meticulous Japanese way. It’s delicious.

But back to Romance! What a find. Basically, although wonderful food is served there, we’ve found the local bar. And I do mean local; it is us and the people who live nearby. We become one of the regulars and are welcomed as such. Often there is a man who can speak English so he translates for us. The owner and chef, Miyoki-san, uses her translation device and I use mine and I learn a few more Japanese words. We discover we have a mutual love of competitive figure skating, and watch the World Championships together while she cooks and serves, and people marvel at my ability to explain what’s happening on the screen. Someone commented it’s as if I can understand Japanese, but no, I just know a lot about skating.

Don and I notice that a couple of the regulars order a little food but basically drink their dinner. One woman hardly eats but drinks three beers and smokes two cigarettes. Ah yes, smoking is allowed. We don’t mind. I’m having so much fun being there as one of the regulars, and the food is so good, that I barely notice the smoke. One man is a bomba – a street magician, another has recently opened a kimono rental store. And one night we go there with our Japanese friend Riko, who lives in Vancouver but is visiting family while we are in Kyoto. It’s so good to see her, and of course she translates for us. I also learn from her to say Miyoki-san and not just Miyoki.

drink little but devour the food! Beautifully cooked grilled chicken on a plate with potato salad and lettuce with a vinaigrette dressing, and a side dish of rice, and another dish with small cabbage pieces cooked in an unnameable delicious sauce, and miso soup with pieces of fried tofu and white radish in it. When I express interest in the “pink blancmange” that the man next to me is eating we each get side dishes of that too; sesame sakura flavoured soft tofu with a very delicate flavour.

On our last night there Miyoki-san has a surprise for me. She is wearing a kimono, and has borrowed one for me. As soon as we walk in the door she dresses me in it. 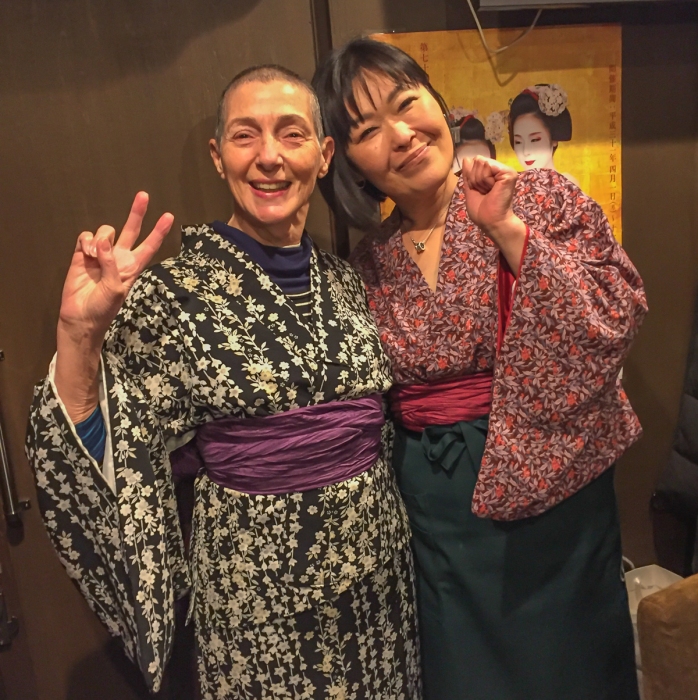 At the end of the bar near the door there’s a bunch of silk flowers in a vase. When we leave, for the last time, she cries, and spontaneously grabs the flowers and hands them to me. I still have them. I’ll never forget her or her little restaurant in Kyoto.

There is nothing quite so elegant as a Japanese teahouse, even one busy with tourists. After exploring Nijo Castle we gravitate to Waraku-an teahouse in the grounds of the castle.

I order matcha green tea and cakes. When my order arrives I am thrilled to find that the three small sweet red bean cakes come in an exquisite gold box. It is a thing of beauty that fills me with joy. I want to take it home with me, but alas of course I cannot.

In Japan there is always a striving for perfection, and an underlying reverence for a simple minimalist aesthetic that is inherent in the culture. Beauty is sought in even the most ordinary things. Such as a bowl of camellias at the entrance to Reikan-ji Temple,

or the placement of stones in a garden, such as these in the grounds of Nijo Castle,

or camellias placed on a water feature at Honen-in Temple.

It is found in more resplendent ways in ancient grand entrances such as this one at Nijo Castle, 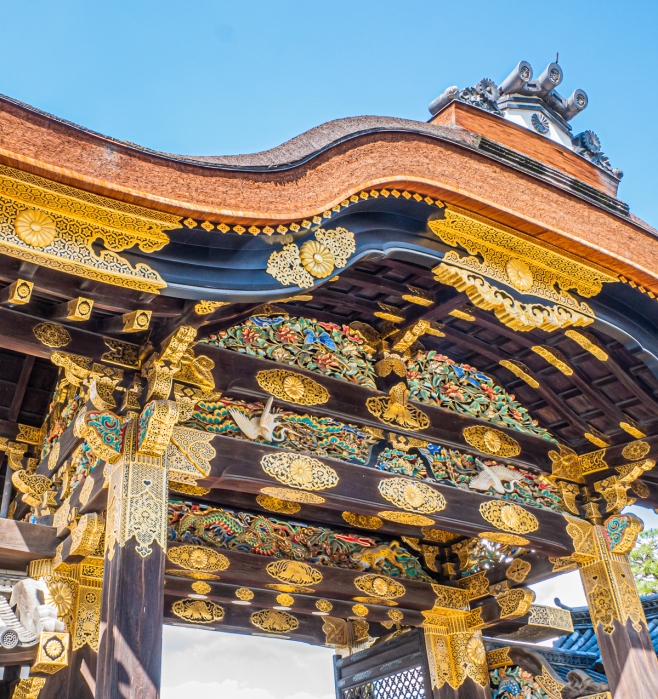 or in the perfect placement of plants and stone lanterns in the garden of Honen-in Temple.

But back to more mundane things. We’re staying in a machiya, one of the tiny traditional row houses of old Kyoto, and on our first morning we set out to find grocery stores to stock our small kitchen with breakfast and lunch foods. We are not in a rush, and I’m feeling happy and enjoying trying to decipher all the labels of packages to be sure each contains what we want. I am absurdly pleased when I figure things out. Last visit to Japan I chose the wrong thing and ended up with yogurt instead of milk. And here are three other things I was wrong about in recording my 2018 visit to Japan:

Talking on transit. I wrote: People sit contained and silent with their legs together, nursing their bags on their laps. There is no, or very little conversation and what conversation there may be is brief and whispered. And then we got on a bus in rush hour. Well of course people talk! By Japanese standards it was downright noisy.

A big sign near Fushimi Inari Shrine. Oh this is a doozy. This is what I wrote: I see this woman on the main road leading down from Fushimi Inari Shrine. She stands next to a large red banner. Maybe she is from a religious sect or cult. She barely moves as she watches people streaming by. Most of the time her hands are in a prayer position. I’m annoyed that I didn’t think to photograph the entire banner. With the slogan I may have been able to find out something about her. As near as I can tell the banner says Many ca . . s are coming. Let’s walk in . . .Let’s walk in peace maybe?

Ha! This visit I got to see the banner. I laughed. What a fanciful imagination I have. I still have no idea who she is or what she represents. Google told me nothing.

Japanese people wearing kimonos to sightsee. I wrote: I had a long talk with the man behind the bar in the hostel in Kyoto. I asked him to look at a blog post I’d written about Japan to make sure I was not completely off base with it. He told me that the part I’d written about Japanese tourists dressing up in kimonos to go sightseeing is not right and that no Japanese person would ever do that. So when I start exploring the main sites of Kyoto I test this information. I ask people wearing kimonos where they are from. The most frequent answers are China, Korea, and Taiwan. Well, in fact it is quite common for Japanese women to wear kimonos,

and very common for Japanese women, and entire families, to dress up for the day when sightseeing, especially in Kanazawa and Kyoto. In all the following photos I can’t be sure these people are Japanese but it’s likely they are, 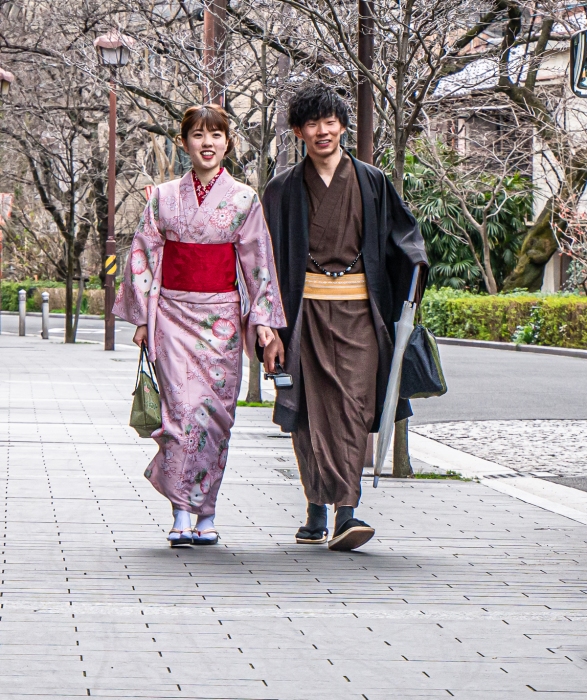 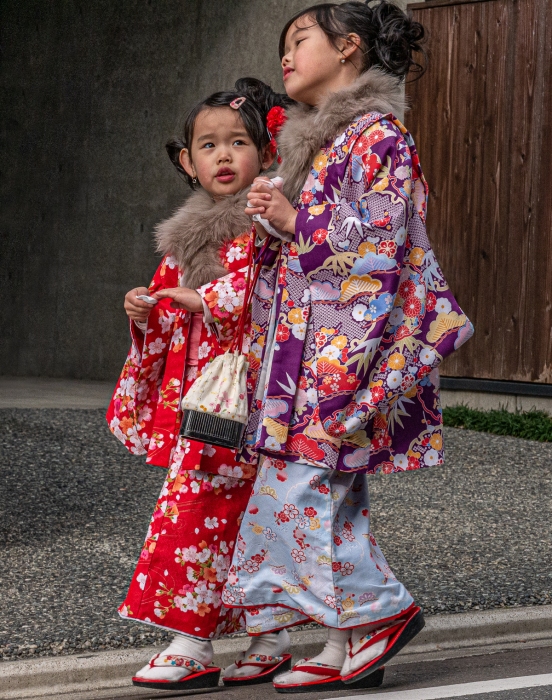 and I know for sure these two lovely young women are.

They were seated facing us on a train, and we got talking to them, and yes indeed, they are Japanese and had dressed up to go sightseeing for the day.

Which just goes to show that you shouldn’t believe everything a guy behind the bar in a hostel tells you.

Don and I are walking Riko from Romance back to the subway station when we suddenly see her. Like a bright exotic bird she walks with tiny practiced steps towards us on shoes that would break my ankles. She is the real thing. Definitely Japanese. Definitely in kimono. Definitely not sightseeing. This rare creature is off to attend her evening appointment. She does not look around, but focuses forward with a strange delicate yet powerful energy. She looks so frail and meek, but at the same time clearly says Don’t mess with me! She sees us, but does not see us. She concentrates only on her mission. She is a maiko, an apprentice geisha, and is oblivious to her surroundings. I, on the other hand, am thrilled. As thrilled as I would be to see a toucan in the jungle. Each event possible, exotic, and so rare. Always hoped for. And always a surprise when it happens. This young woman, in her natural habitat, the Gion neighbourhood of Kyoto, has fulfilled one of my dreams simply by the serendipity of her crossing my path. Japan never fails to bring me joy.

41 thoughts on “You Can’t Trust the Man Behind the Bar; food and fashion in Kyoto”