29 April 2018. On my second day in Japan I take the subway from near my hostel in central Tokyo to the neighbourhood of Asakusa. I’m up and out early because I’m hoping to photograph Sensoji Temple before the crowds. On the train I overhear a couple of American men speaking English. I can tell they’re American from their accents. They get out at the same stop as me.

Years ago when I first came to the U.S. and Canada from Australia all I could hear was an accent I called North American. All the r’s in the middle of words are pronounced. No Aussie would do that, and most Brits would not either. I was aware of, and could recognise some of the regional accents like New York (where the r’s are also lost) or Southern U.S. but pretty much all the rest of the States and Canada sounded to me like what I called North American. Now, after having lived in Canada for over thirty years, I can hear the difference between American and Canadian. These guys are definitely American. Not that this has any bearing on my story.

As we’re all walking up the stairs from the subway I ask if they know where they’re going (being strangers in a strange land and all that, and maybe they too want to find the temple). One of them replies that he never knows where he’s going. Haha. I mention I want to get to Sensoji Temple. I ask with the idea that they might know where it is, and what direction to take from the subway exit. The second man gets very helpful. He says come with me I’ll show you. We were there yesterday. As we walk the short distance to a main road he tells me that unfortunately they’ve built a Starbucks on the corner, the implication being that it has somewhat ruined the setting of the temple. He points to the left down the main road and tells me to walk until I see the Starbucks on the corner then turn right and I’ll see the temple.

I walk and walk and walk. There is no Starbucks. I walk some more. Finally I ask a local woman who gets out her phone, checks it on the map, and shows me where to go. By this point I’ve walked 1.5 kilometres from the subway station. The temple is about half a kilometre in the opposite direction! That arsehole (spelt the British way, and you can be sure that “r” is nowhere to be found) deliberately sent me the wrong way. Who does something like that? There is no Starbucks on the corner near the temple as I soon discover when I finally arrive there after having walked three kilometres more than I need to.

I’m rattled and upset, and any chance of beating the crowds seems to be gone, though as I discover later I had no idea of the crowds to come. I take some photos and look around the temple trying to take it in. It’s quite special but I’m really feeling like a five year old, hurt that someone would be so mean to me.

Sensoji is Tokyo’s oldest Buddhist temple, the original one having been completed in 645CE. The outer gate is known as the Kaminarimon or Thunder Gate, and is the symbol of Tokyo. At the end of a long shopping street is the Hozomon Gate,

and this is from the main hall looking out.

There is also a five-story pagoda off to one side.

After leaving the temple I wander the streets of Asakusa for a while, 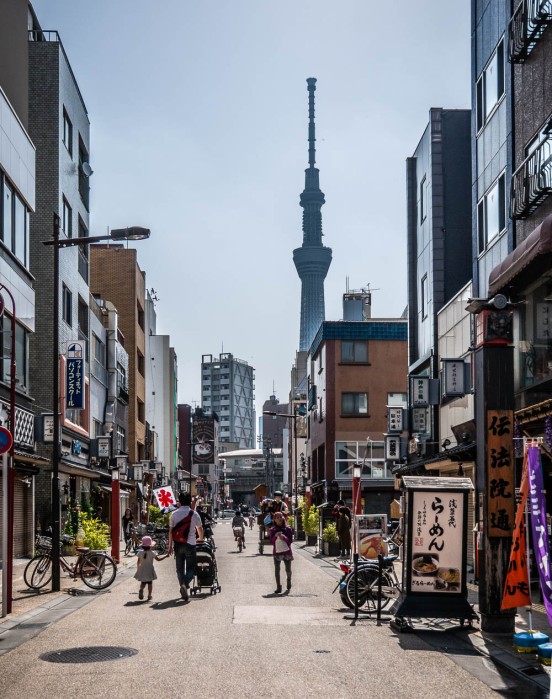 trying to shake off the sadness from having been deliberately misled for no reason. I eventually take myself into the government tourist office across the road from the temple. There I have a lovely long conversation with a Japanese woman about how to get to my intended destination the next day. She is so sweet and helpful that my faith in humanity is restored. Then I go to the top floor and get to see what it really means when the crowds descend on Sensoji. You can see them streaming down the shopping street that leads to the temple.

and a view of Tokyo Sky Tree, 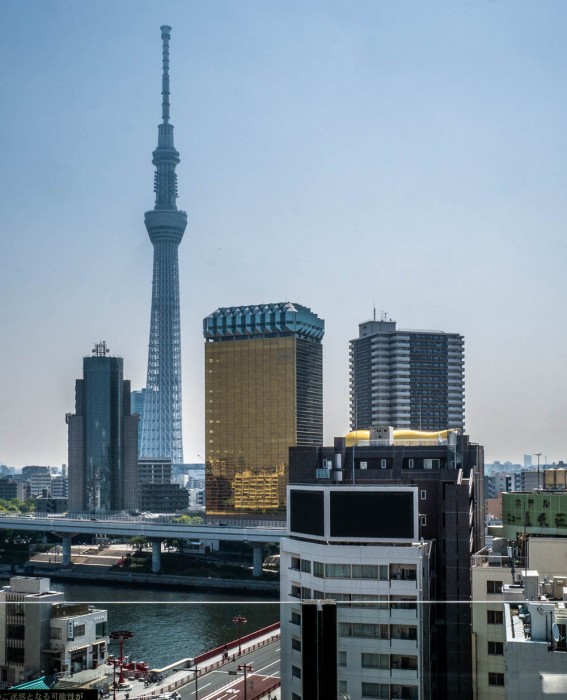 and I’m fully restored to good spirits. But not for long.

From Asakusa I go to Harajuku.

Many years ago my sister lived in Tokyo and introduced me to the crazy, colourful, and brilliant outfits that teenagers would dress up in. They would hang out on the pedestrian street in Harajuku, a tribe of young renegades, at least on the weekends anyway. They were documented in a magazine called “Fruits”. I read that the pedestrian street had been reopened to traffic. This meant that the kids no longer had a place to gather, so they spread elsewhere, and eventually the entire movement more or less died out, in much the same way the hippie movement died out. There was a new group of kids, girls mostly, known as Lolitas, and possibly one or two could be found in their fancy outfits in Harajuku on a Sunday. 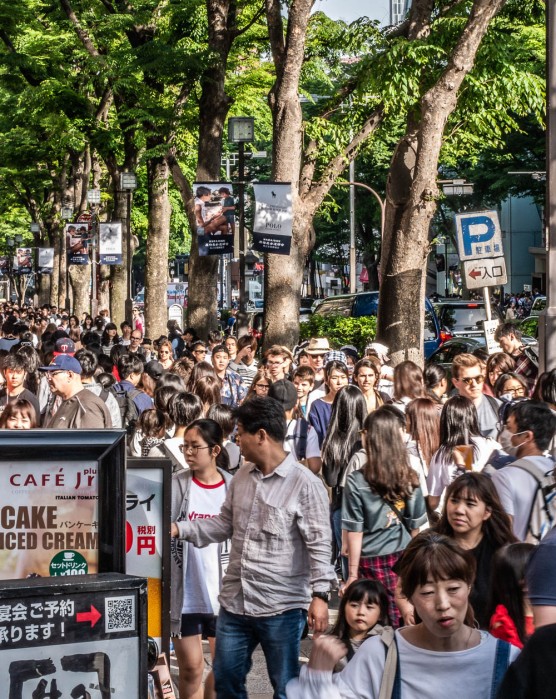 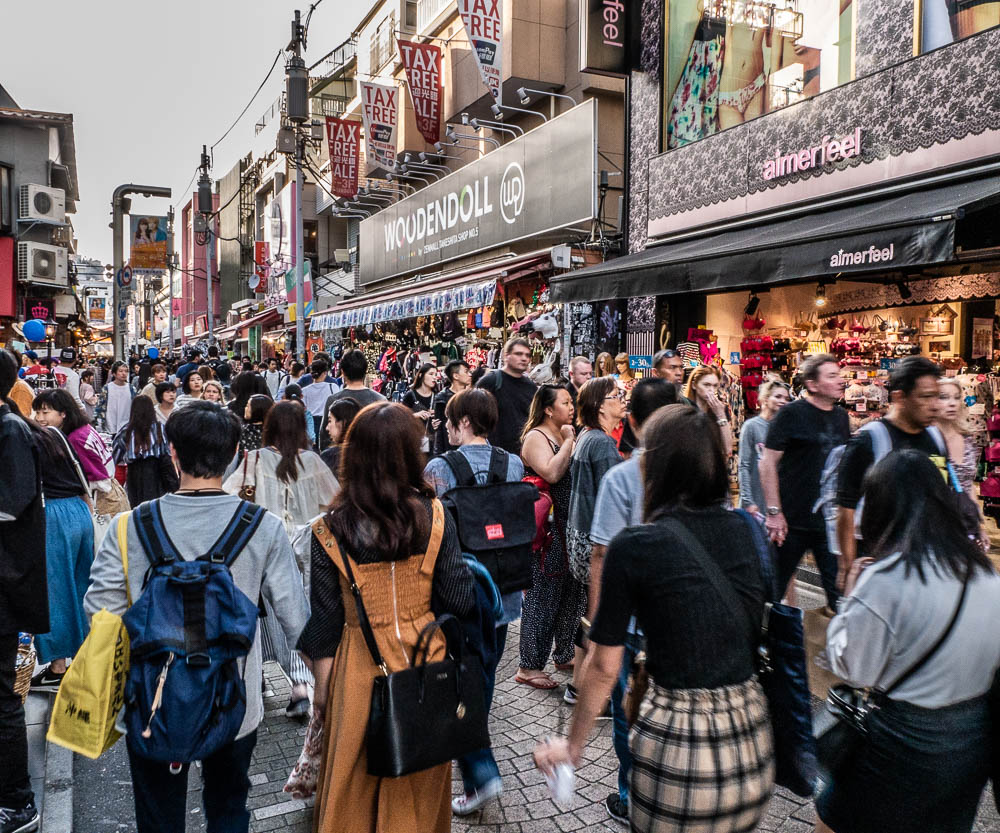 I’m disappointed and frustrated: there’s nothing to see but wall-to-wall people. I inch my way slowly along the street. Despite the unrelenting crowds I’m determined to get to the mirror building. For one thing there is the mirrored entrance to be seen and photographed, and for another there’s a Starbucks with a garden of trees on the roof. It’s my only hope.

The mirror building is everything I’d expected from having seen a gazillion pictures of it on the Internet. It must be one of the most photographed buildings in Japan, and rightly so. It’s quite extraordinary. The name of the building, a shopping mall mainly for fashion, is Tokyu Plaza Omotesando Harajuku, known locally as Omohara. It was designed by Hiroshi Nakamura. For me the building is another example of the mind-blowing creativity of the Japanese, a supposedly suppressed people who come up with designs like this!

From the outside looking in

The entrance is a kaleidoscopic phantasmagoria of mirrors at all angles. The tunnel of mirrors is surreal, a fanciful hallucination. People prone to seizures should definitely stay away. 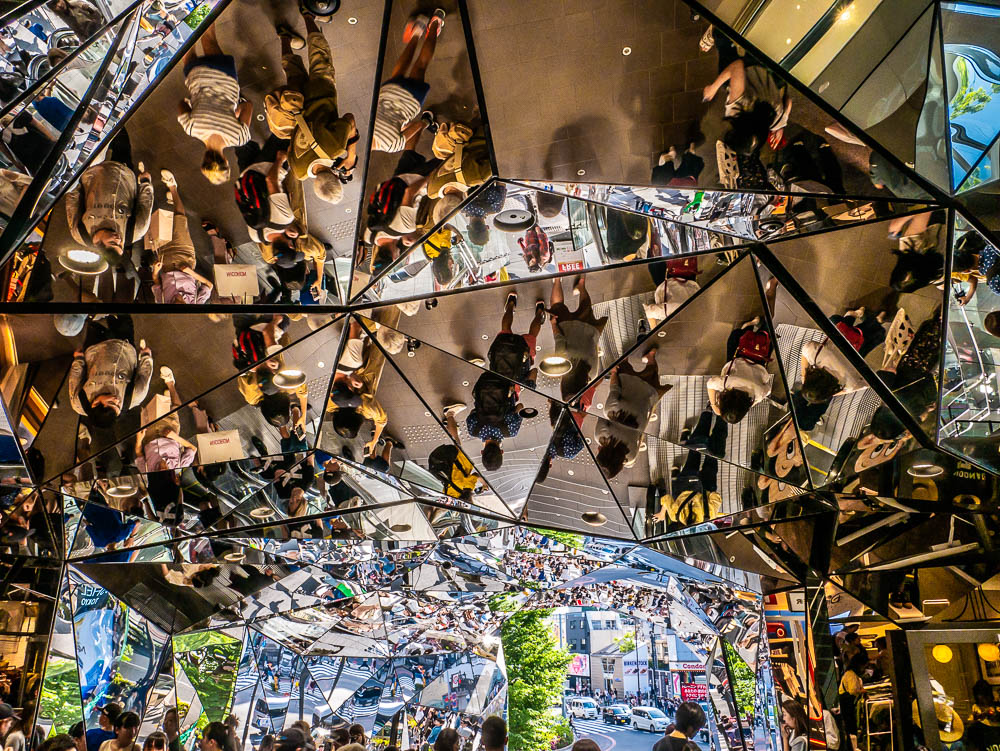 Inside the tunnel of mirrors looking up

From the top looking down

After being swallowed by the tunnel of mirrors I make my way to the sixth floor roof terrace garden. I pick up a coffee, sit down in the shade on one of the many wooden benches, and unwind. Phew. Deep breaths are taken as I relax and take in my surroundings. It’s a large open terrace with many trees and other plants. It’s busy without being overwhelming. There’s a fresh breeze. I look over the edge to the crowded street below and am glad for this quiet oasis. I sit for quite a while.

I realise the man who tricked me at Sensoji Temple is another kind of mirror. It’s my first day without a guide and without Don. The incident shows me that I’m not yet trusting myself, not yet believing that travelling alone can be easy and that I can do it. Things improve over the following days though I never really quite settle.

Once recovered I set off again. There is still one more building in Harajuku that I want to see that is just as extraordinary as Omohara. The Audi Forum, designed by Creative Designers International under the direction of Hiroyuki Yoshikawa, seems impossible. And perhaps it is. The building was completed in 2006, but I notice that all the windows from top to bottom are draped with black plastic. Maybe they’re just renovating.