19-22 March 2015. Driving from Rotorua back to Taupo we are drawn to the landscape in the distance. Clearly it’s time to go exploring. A sense of freedom comes from having a GPS since there is no fear of getting lost. We drive where our senses pull us, and then, when we’re ready, we enter in the address and let the disembodied voice lead us home.

We can see unusual hills off the highway and head up a side road to get closer to them.

It’s lovely countryside, but what we find that’s really interesting is this: 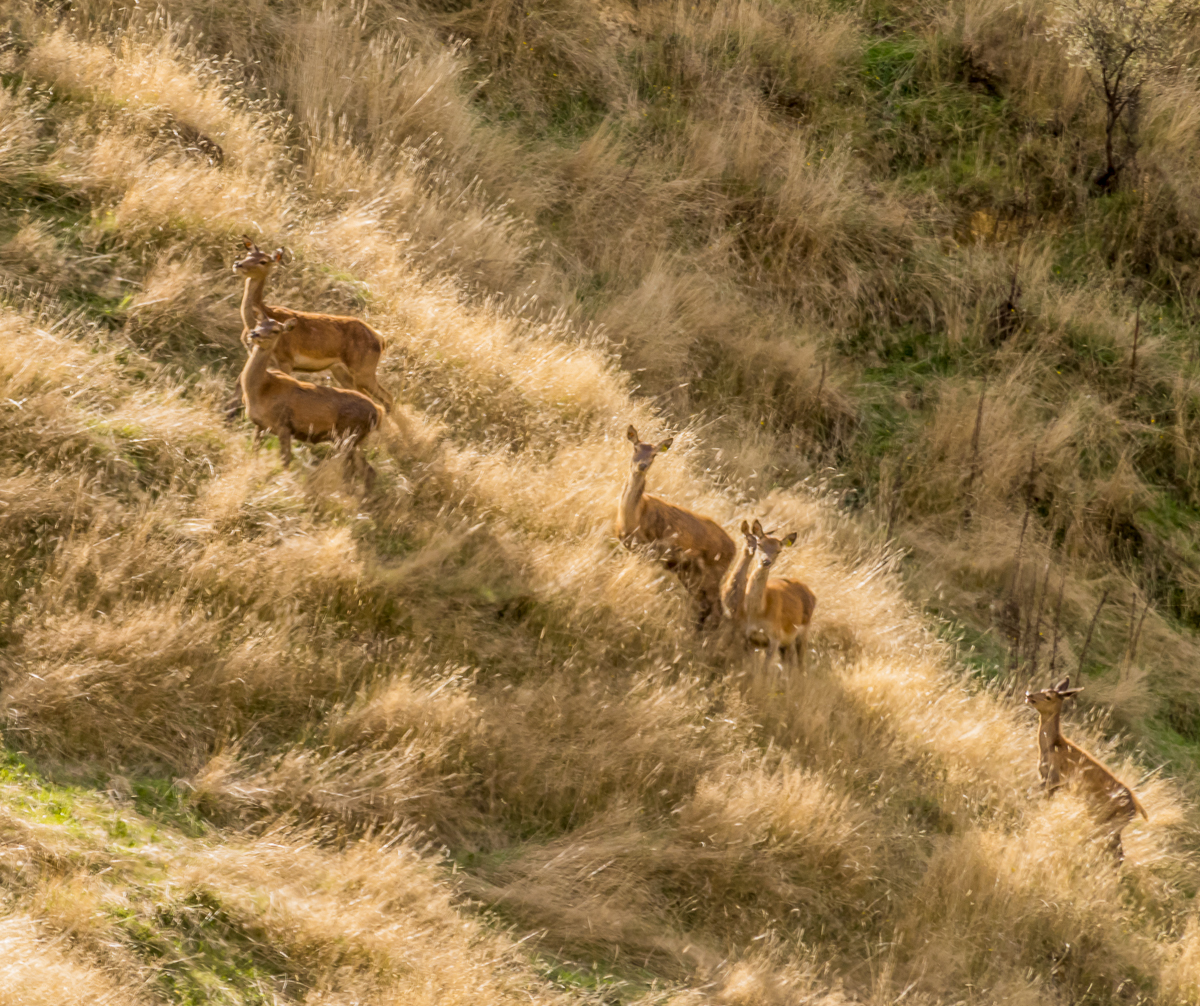 There are hundreds of them. We stop the car and watch them for a long time. Even though we are quite far away, and barely moving, they become aware of our presence. They start running. They come from our right, more and more and more of them, running up the hill, then down again to join the rest of the herd. We are astonished by how many they are. Hundreds. All rushing to be together with the herd. Later I read that deer are easily disturbed, and so it seems. Eventually they all settle down and walk off into the distance, away from us.

Large-scale commercial deer farming actually started in New Zealand. Deer are not native to the country, but were introduced for sport hunting in the late 1800’s. Their numbers rapidly multiplied and by the mid 1900’s they were regarded as a pest because of their impact on native forests. The export of venison from wild deer began in the 1960’s, and by the 1970’s industry pioneers began capturing wild deer and farming them. The industry has grown to 2800 farmers and 1.1 million deer. It is the largest source of farm-raised venison in the world, selling mainly to well-established markets in Europe. A national pest has become a source of income.                                            ******************** 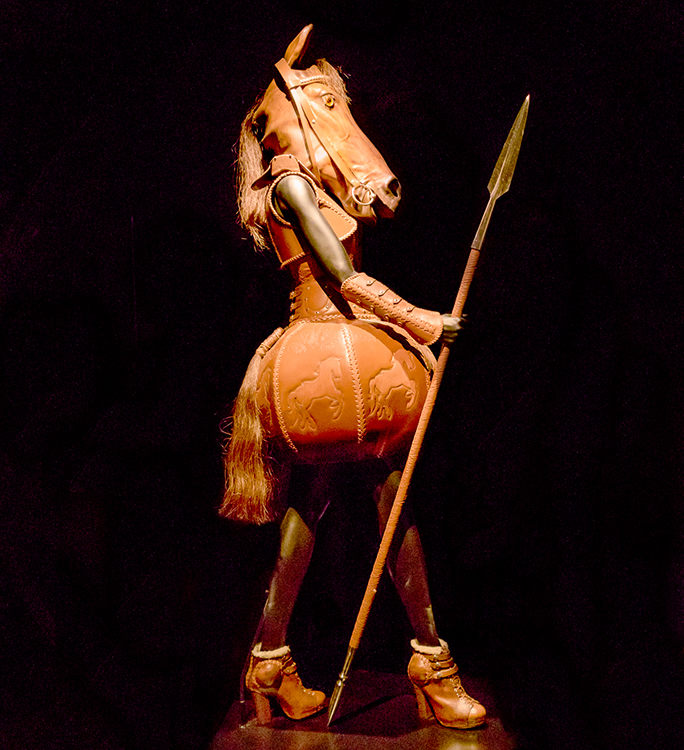 The one thing the world will never have enough of is the outrageous. Salvador Dali

In 1987 in a country cottage near the town of Nelson a fashion show was held. It was no ordinary fashion show. Artists and designers were invited to create wearable art. It was the passionate dream of sculptor Suzie Moncrieff. From that small beginning it has grown into one of the biggest and most prestigious art and design competitions in the world.

Every year hundreds of entries arrive in Nelson for the initial selection. Those that are chosen participate in a unique choreographed music and dance performance while competing for highly respected awards and $165,000 in cash prizes. Having grown far too big for the town of Nelson, the annual two-hour World of Wearable Art spectacular is held in September in Wellington and runs for fifteen performances seen by nearly 50,000 people.

We’d heard of the World of Wearable Art museum in Nelson with its rotating collection of the best entrants in this annual extravaganza, and planned on going. We really should write these things down. Nelson came and went and we realized we’d forgotten to go to the museum. Upon further investigation we discovered there was an exhibition in Auckland, but it was finishing in a few days. So we did a lightening overnight trip from Taupo to Auckland to see it before it closed. WOW! 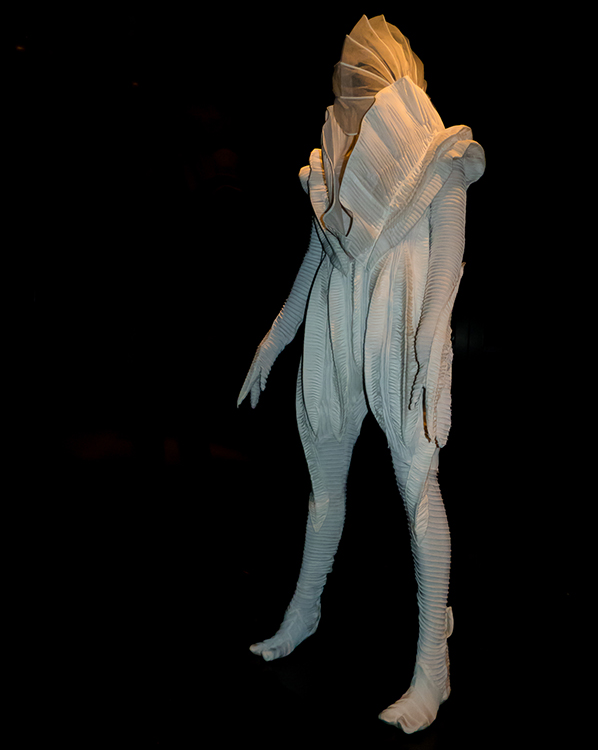 A sign at the exhibition:
A wilder kind of wardrobe
In 1987, WOW founder Dame Suzie Moncrieff had an idea – she would get art off the walls and onto the body. Over 25 years later, thousands of makers have translated her vision into their own unique pieces of wearable art.
These spectacular creations from WOW’s archives prove that the only limit to wearable art is the artist’s imagination. Some come from a technical challenge. Some show everyday materials transformed into something extraordinary. Some are aimed to simply delight the eye.
WOW’s judges look for originality, creativity, and skill in construction.

Categories include the Open Section, clothes for children, Avant Garde, Cultures of the South Pacific, Bizarre Bra, and Creative Excellence. 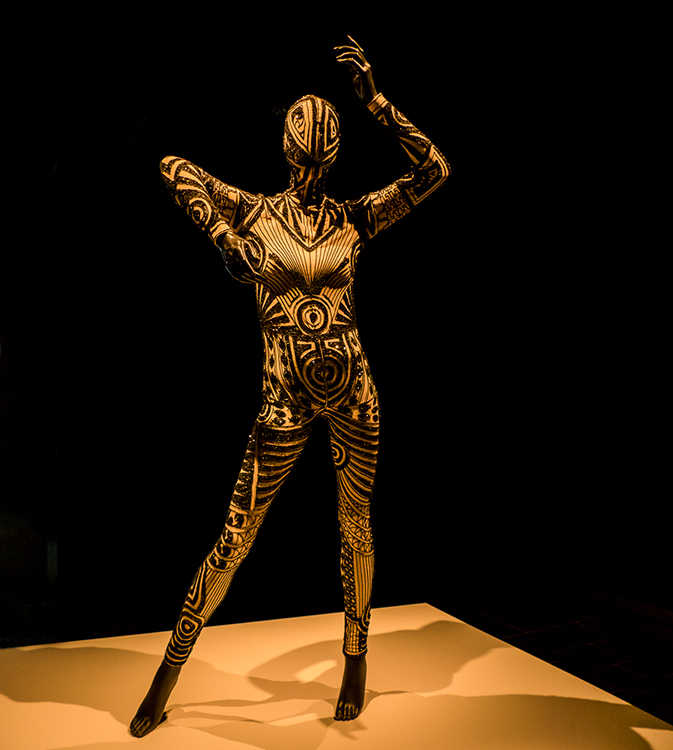 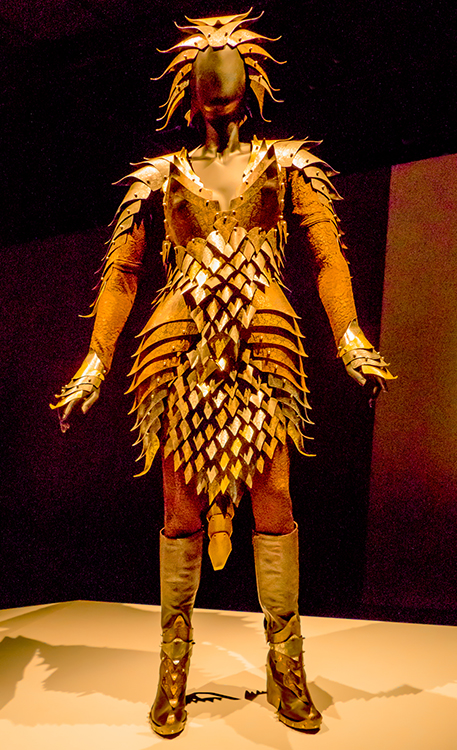 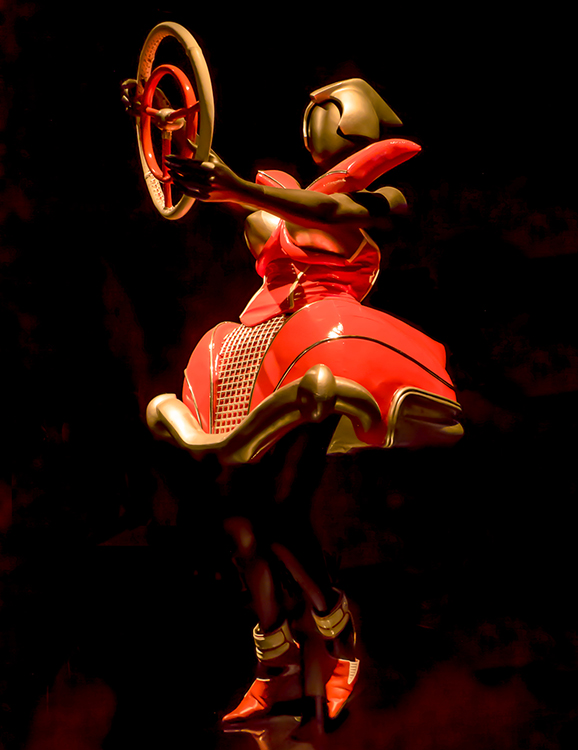 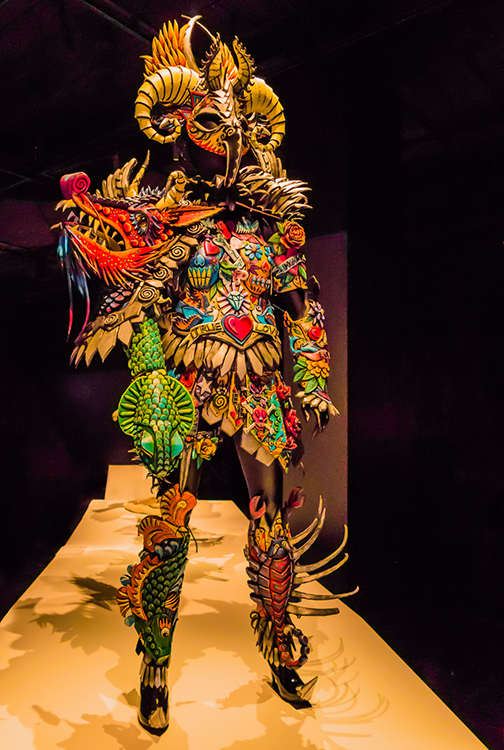 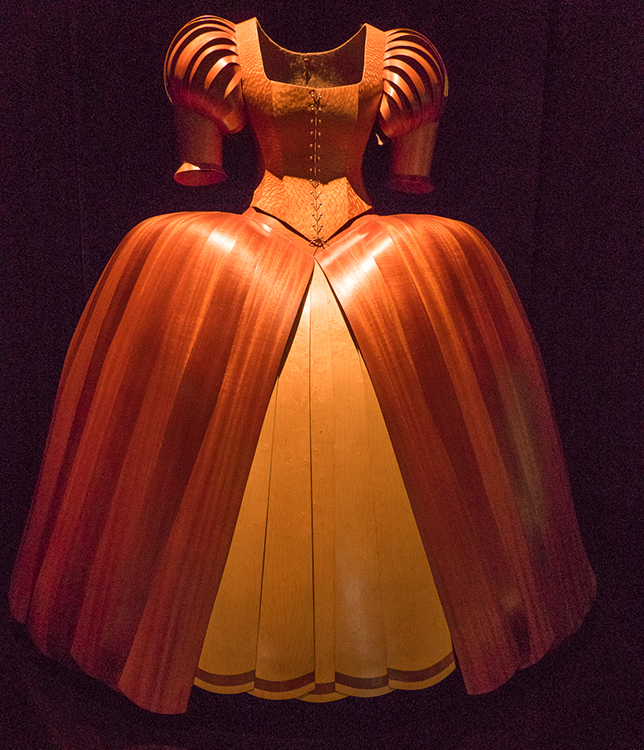 Lobster Woman was definitely one of my favourites. 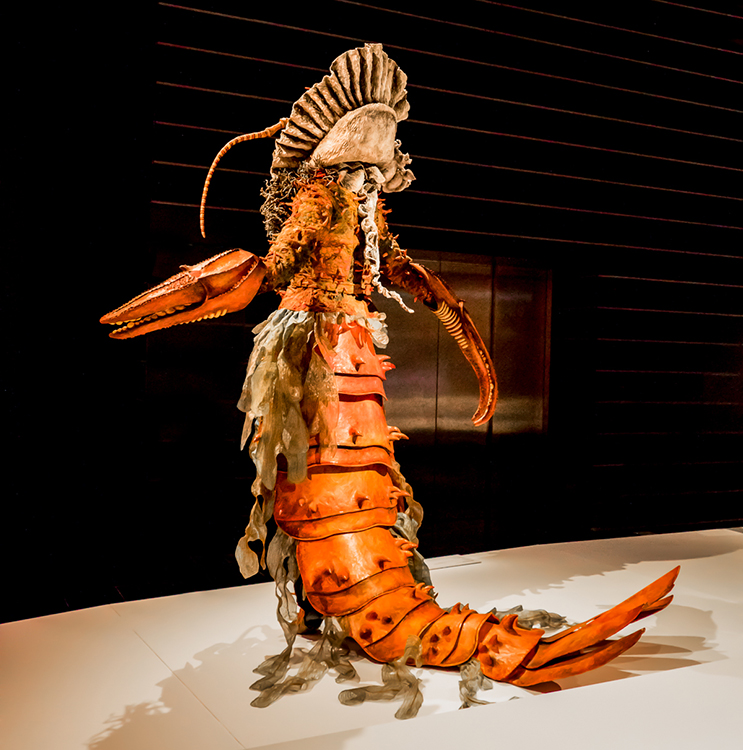 We’ve driven about three quarters of the way, through beautiful green countryside, from the sea at Whitianga, up and over the ranges towards the sea at Coromandel Town. Suddenly up ahead we see pigs at the side of the road. Pigs. Many of them. Pigs of all ages, from tiny little squealers to large adult males. Sixty-two pigs to be exact, roaming and rambling at will, and in their midst several chickens and a barefoot curly-haired man, all grubby sweats and plaid shirt and smiling bright eyes. So we stop of course and have a long conversation with Stu the Pig Man. 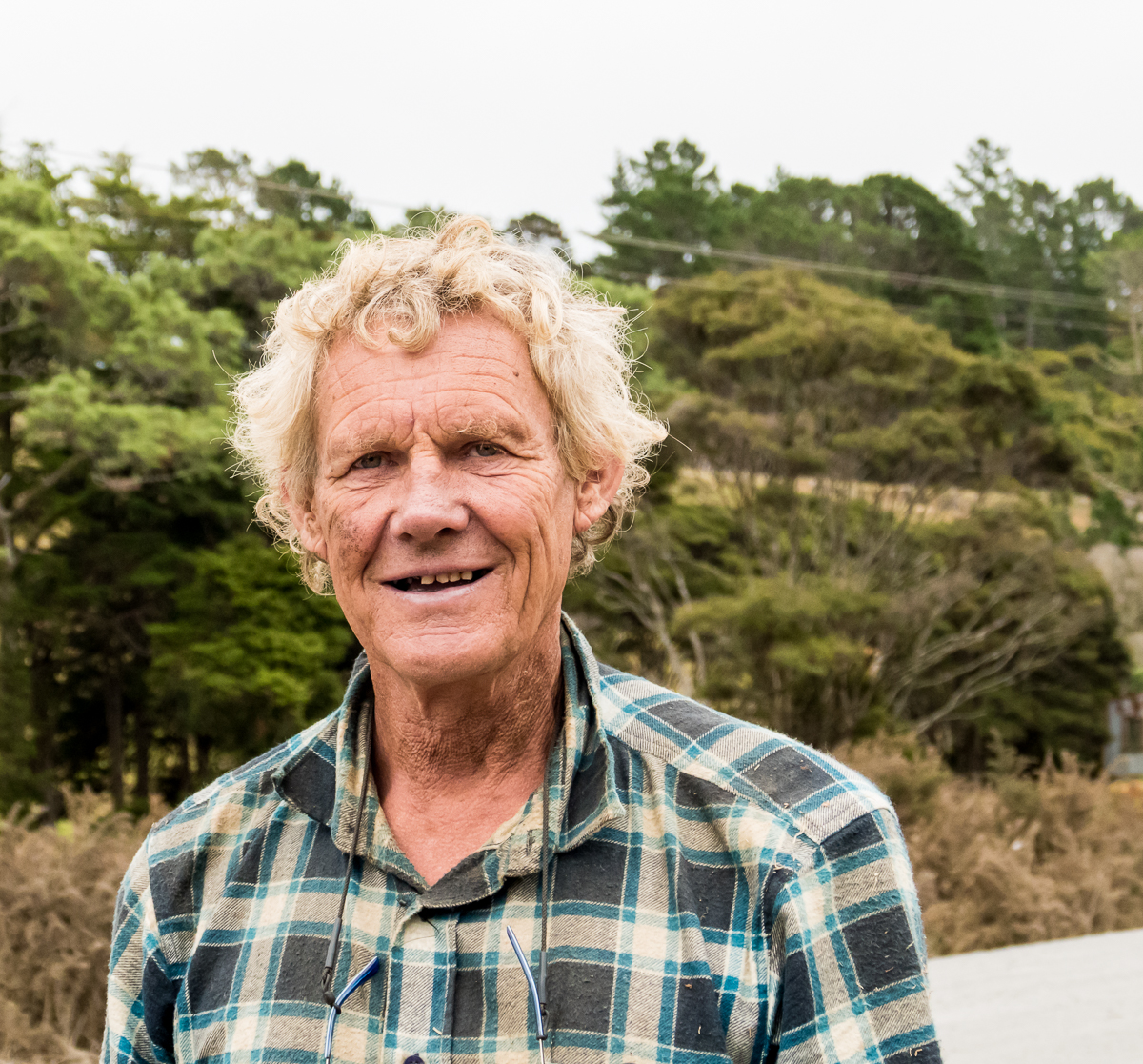 Stu lives in the bach. He gestures to a corrugated building across the road from where we are standing in amongst the pigs. In New Zealand ‘bach’ is short for bachelor pad, meaning a one-room home or apartment.

Next door to the bach is the family home where his brother lives with his wife and child. The tract of land, nine hundred acres, was acquired by his father shortly after the second world war. The pigs are feral, having descended from the pigs brought to New Zealand by Captain Cook in the late 1770’s. Wild pigs proved to be just as destructive to the New Zealand native forests as deer, and are openly hunted. But not by Stu.

He doesn’t raise them for food or for sale. These pigs are Stu’s pets. All sixty-two of them. 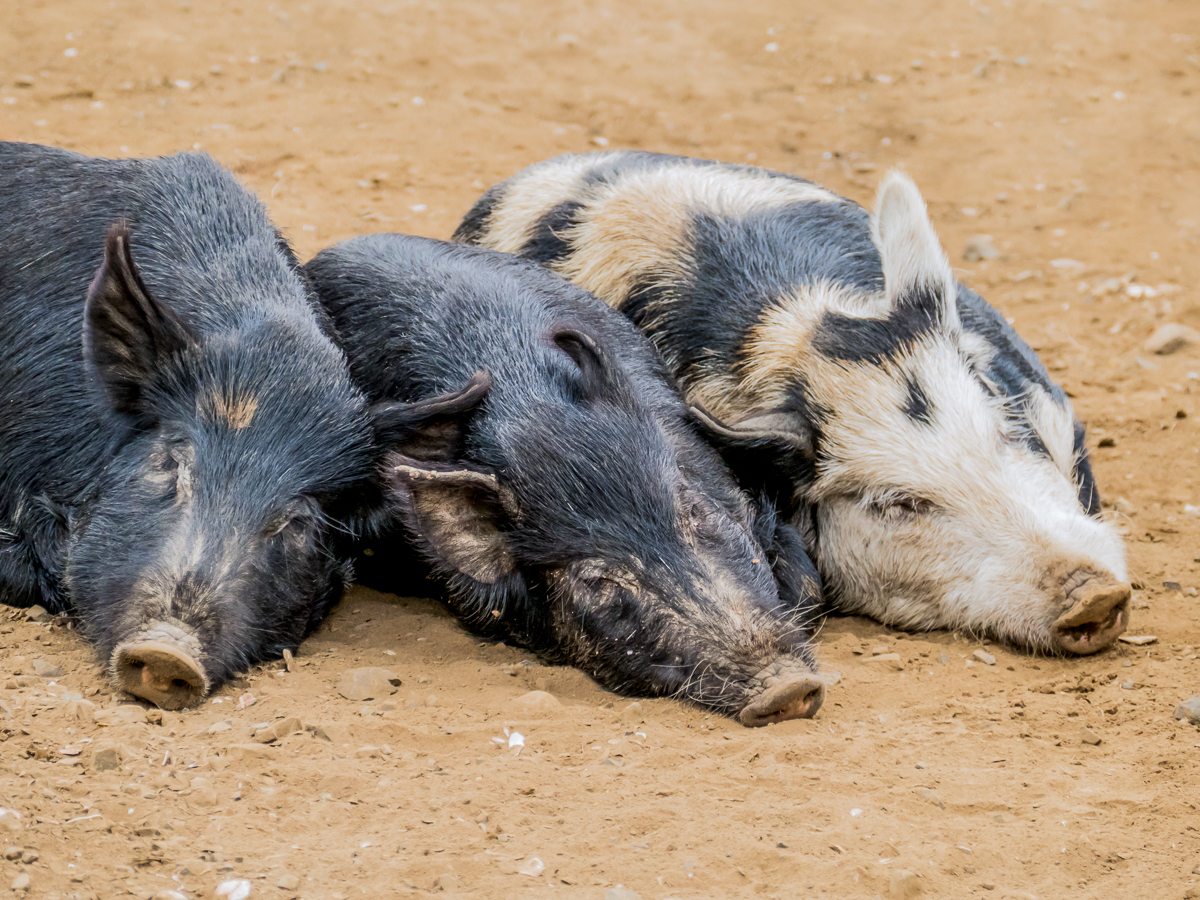 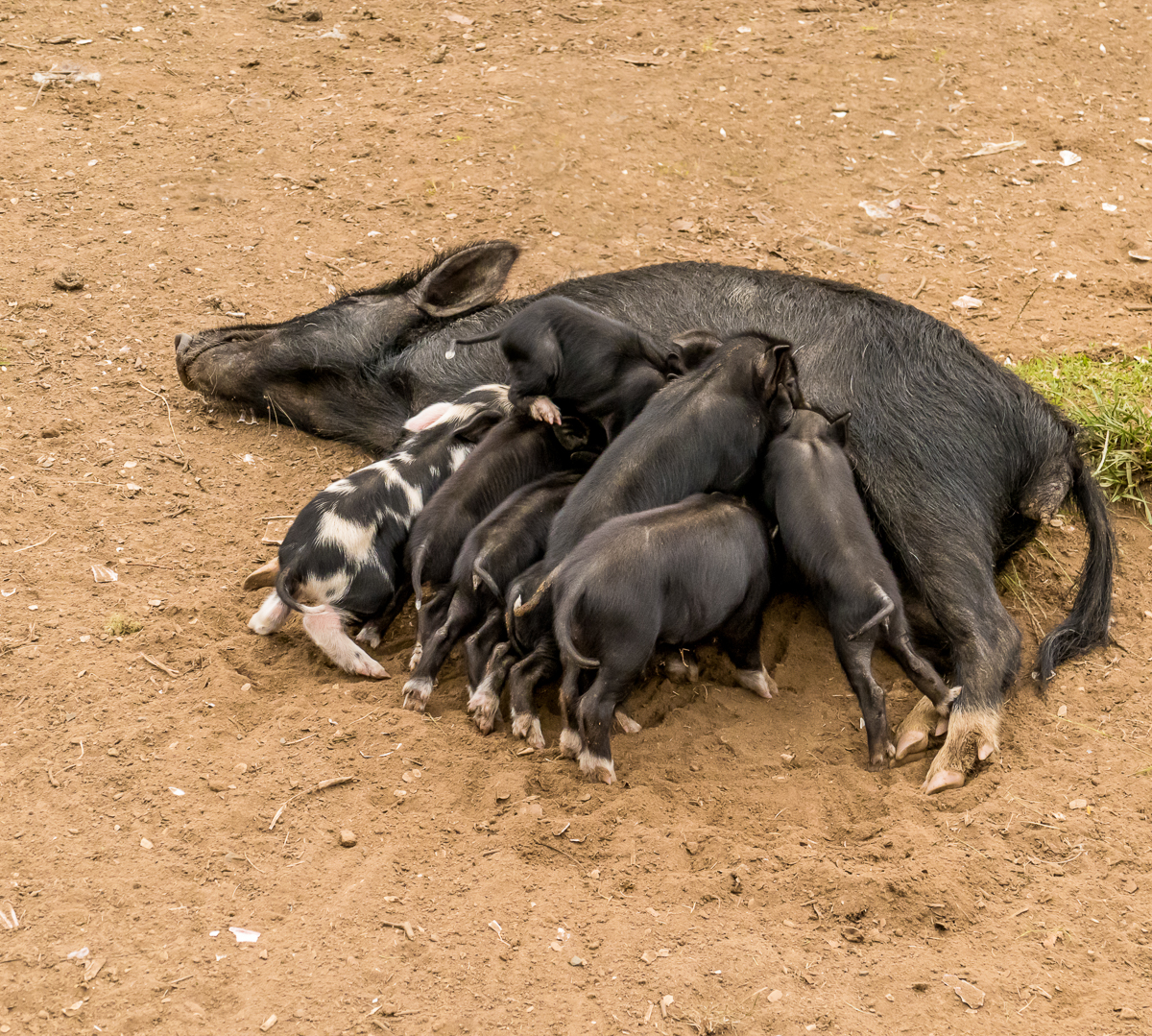 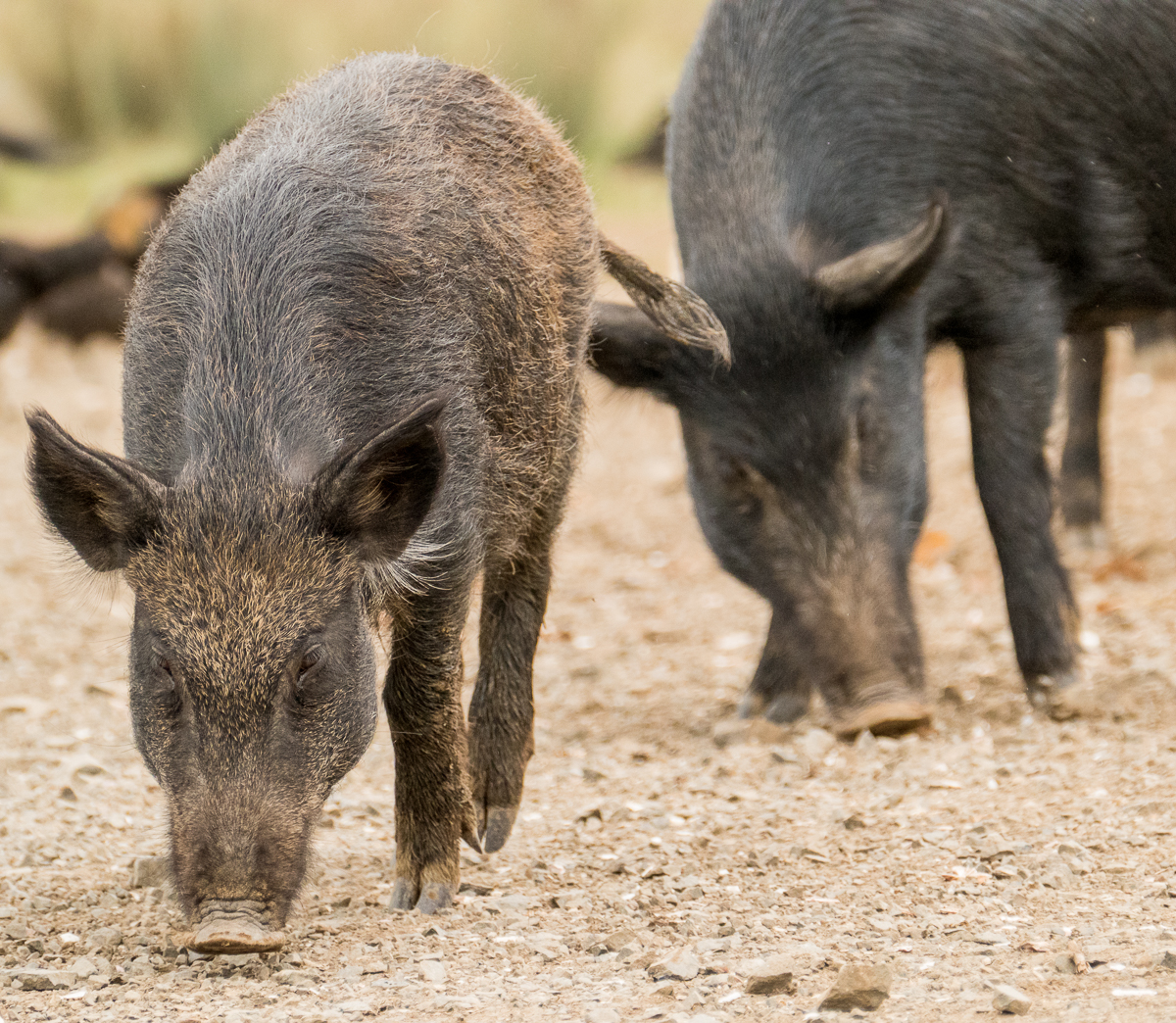 He knows them all by name. He talks about the sow and her piglets, pointing out that the bigger piglets are actually the offspring of another sow, but they push in and suckle from the sow that most recently gave birth. It’s not fair but what can you do?

In the winter the pigs live in the bach with him. He says they keep him warm. He also has a satellite dish hooked up to an old trailer. When he watches TV the pigs come in there too. 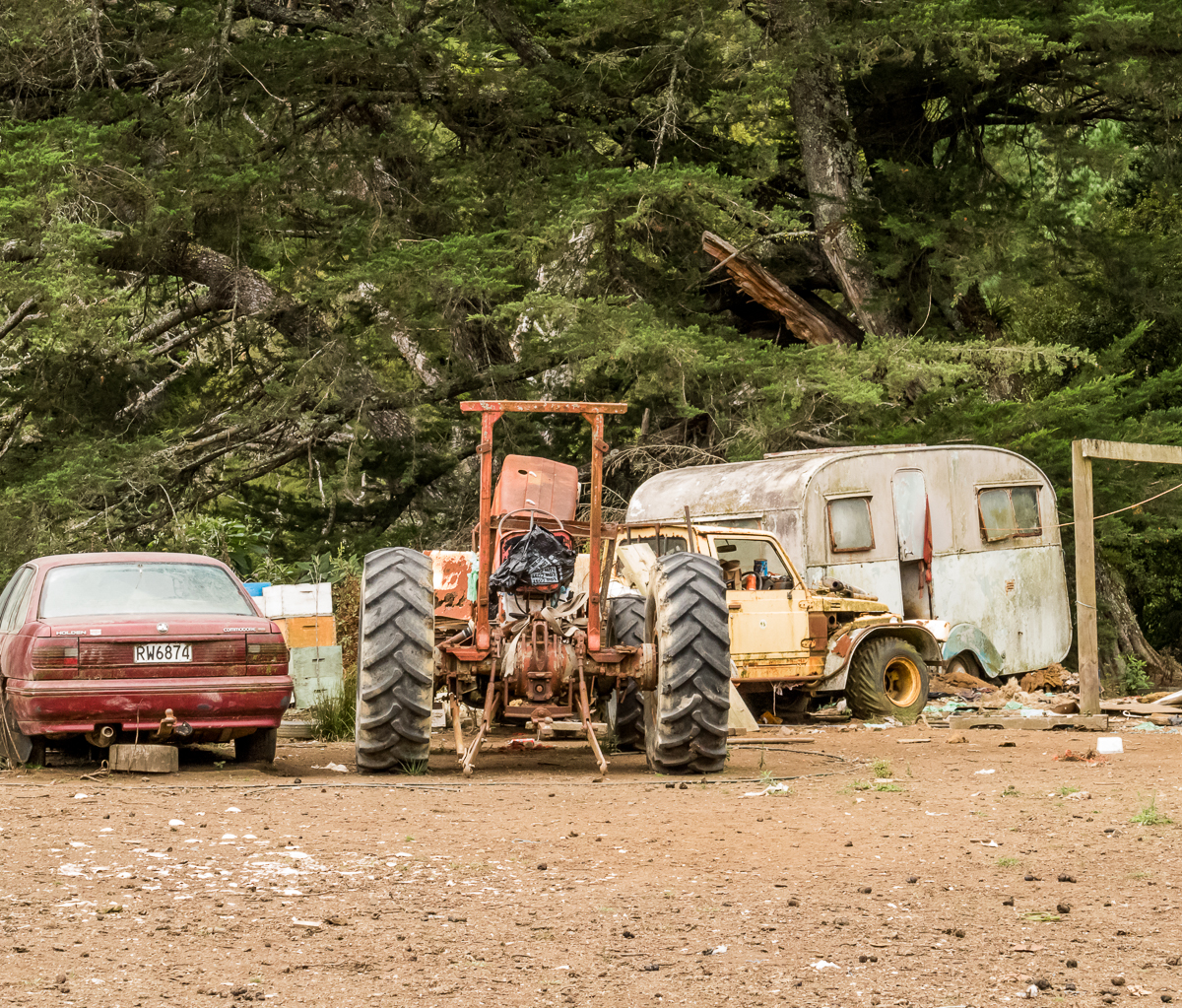 At one point during our conversation one of the locals stops to give Stu some old bread. In a heartbeat all the pigs are crowding around him jumping up to get some. 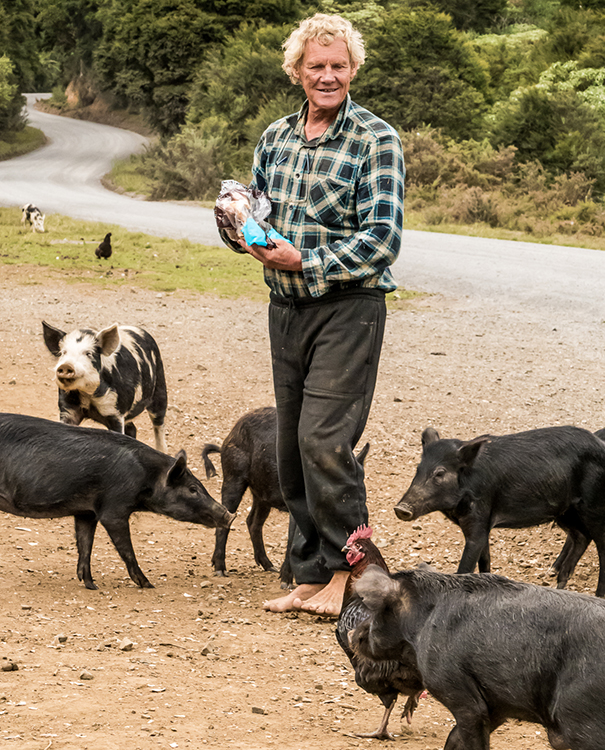 Stu is clearly a happy man. His bright eyes smile as he looks directly at you, his love for the land, for the earth, for every one of his pigs is palpable. There is no guile, no pretensions, no caring about social norms. What there is, is a big smile, an open heart and gentle kindness. His quiet joy is infectious and we feel lucky to have met him. And his pigs.

We knew nothing about Stu beforehand but discovered later that he is actually listed as an attraction on the Coromandel Town website.

Next post: a tiny hand-built railway in the mountains. If you build it they will come.

Paul and Rebecca have also written about Stu on their blog movin2newzealand
https://movin2newzealand.wordpress.com/2014/08/22/stuart-and-the-wild-pigs/

Scene during travels in Croatia
Finally travelling again! Walked the old city walls in Dubrovnik - 2km, 1000 stairs - a workout with views.
Beautiful Vancouver - Jericho Beach.
Beautiful Vancouver - Jericho Beach and Park.
When Don and I began our nomadic journey back in 2011 I felt it was important to share the story of the inner journey as much as the outer. It’s been a very long time since I’ve shared a post about the inner journey. And then this happened: about a month ago I stood and looked around our small apartment and from nowhere, unexpectedly, the thought arose How did this happen? How did I get *here*? New blog post: Redefining Success. Link in bio.
June 2021. Altogether there are fifty pink-themed floral installations; it's Fleurs de Ville Rosé. Latest blog post: In The Pink! An explosion of beauty at Fleurs de Villes. Link in bio.