Our nomadic life was initiated by direct revelation from what we have come to call The Mystery: that source of all true wisdom, that still small voice that we can hear if we pay close attention and ignore the much louder, and usually negative voice of the human mind. The information that we received day after day for months on end while we made the decision to sell our home and most of the rest of our belongings, and begin travelling as nomads engendered in us a deep trust of the mysterious, inexplicable wisdom of the universe. We’ve come to see that everything that has happened to us on our travels has been for the betterment of our souls, especially those experiences and events that, given the option, we would have said “no thanks” to before they happened.

So now, after more than two years on the road, we want to take a look back and reflect on what we’ve learned, and see what we know now that we didn’t know before we began.

We thought that we were simply going to empty our respective bucket lists and then eventually settle down in some place that we’d fallen in love with on our travels. It turns out that the more we travel the more our buckets just keep on refilling, and we’ve learned that the travelling has been more about the soul’s journey than it has been about seeing and reporting on the astonishing wonder and beauty of the world. Not that we have any complaints about all the wonders and the beauty we have been blessed to have experienced, but certainly rapid personal growth has been stimulated through having to continuously adapt to new and different circumstances.

One of the biggest things we’ve gained is an unshakeable trust in the guidance we receive: trust in the process of life, in the unfolding of our lives, an infinite trust that Life knows how to live itself and all we have to do is listen and pay attention. We’ve never had this level of trust before: we’ve always wanted it, but never had it before now.

We have learned that we can cope with whatever happens when things don’t go the way we want them to. Alison’s first reaction is occasionally to fall into the old habit of anger and to shout at people, but she gets over it quickly and moves into a more useful mode of being. Travelling all the time has taught us to be much more flexible in our thinking and much more accepting of whatever happens, regardless of the consequences.

We’ve learned that life’s too short to worry about running out of money, or about bad stuff happening, too short not to take risks, too short to miss out on seeing the best there is to see in the world, too short to waste on petty arguments and disagreements, and too short to allow anything that stops us from living life to the full.

We’ve learned two things about booking transportation, hotels, or tours online:
1) If the process feels fraught with difficulty, stop, take a break, and come back to it later: sometimes the difficulty is just a message not to pursue that particular direction.
2) Always say “Let it be easy” before beginning any trip planning, and with that reminder things always work out.

We’ve learned that manifesting is an acquired behaviour, and the more we’ve come to trust the process, the easier it has become to manifest whatever we need: be it a toggle for Alison’s sun hat that she found discarded on a bus seat or photographers’ credentials for a huge dance festival in Puno, Peru.

We’ve learned that home isn’t a physical place but a state of mind: wherever we are becomes our home for however long we stay there.

We’ve learned that mind stories are just that: stories the mind makes up to engender fear and stop us in our tracks. We’ve learned techniques that help us move through those fears and back into a clear space. Although at times fears arise about future plans and desires, we are now able to catch the fears and move from them to envisioning what we have chosen and giving deep thanks for it even before it manifests. We’ve learned the miracle of gratitude, and that there’s enormous power in gratitude and trust.

Alison has learned that sixty-something is not old. We’ve both learned that chronological age is no barrier to living life to the fullest.

From Don: I’m not afraid of life any more and I’m a lot more willing to try adventurous stuff now: I’ve become much more enthusiastic about embracing new places and new experiences. It’s all about embracing the fullness of life in ways I was never capable of doing before.
From Alison: I also am less afraid. Although I have always been more adventurous than Don, I still kept my life fairly small, and was very good at self-sabotage because of underlying fears of having a bigger life. Now I feel as if I’ve stepped out of my previous comfort zone. I’m willing to take up more space in the world. I’m less concerned about the opinion of others. I’m more accepting of myself, and others.

All of this is true. We have changed, we have grown. Yet at the seeming flick of a switch, with some old wound or defense being poked, either one of us can fall into a hole. And the other one has to help us find our way out.

Probably above all, we have learned, at a very visceral level how incredibly blessed we are: drowning in horseshoes.

We’ve learned we can buy basics wherever we go – stuff like dental floss, sunblock, toothpaste, shampoo, etc. often for less than we’d pay in Vancouver.

We’ve learned there’s always a local market to get things we need like insoles, a water bottle, flip-flops, or whatever. Local markets in developing countries are a cornucopia.

We’ve learned that we can get most over-the-counter and prescription medications from pharmacies wherever we go, and at much lower prices than in Vancouver.

We’ve learned that we can get good quality, and timely, medical care at a very reasonable cost in developing countries.

We’ve learned that we can always find our way around a new town or city even when we first arrive: once Don has a map in his hand we’re good to go, and free maps are usually available wherever we’re staying, or can be bought from a street vendor. We used to get a bit panicky every time we arrived in a new town or city, but now we are quite blasé about it.

We’ve learned the value and pleasure of renting an apartment instead of staying in a hotel when we’re in a city or town for more than a week: for about the same cost as a hotel room we get a one-bedroom apartment in a secure building, have much more space, and save money by making our own meals.

We’ve learned that three or four weeks of non-stop travelling, when we’re moving every three or four days, is long enough, and then we need to stop somewhere for a couple of weeks to recharge our batteries and catch up on the blog and emails.

We’ve learned that when we need things like airline boarding passes printed we can go into any five-star hotel and ask to use one of their business centre computers.

We’ve learned that we can Skype-phone to North America from wherever we are in the world and get expert help and long-distance repairs for the very occasional problems that arise with our MacBooks.

Alison has learned that street dogs are not nearly as scary as she once thought they were: she now walks past them with complete panache!

We’ve learned that we can manage wherever we go with only a limited knowledge of the language. We always learn ‘hello’, ‘thank you’, and ‘I’m sorry’ in the local language as soon as we arrive.

We’ve learned that it can be difficult to find spare camera batteries in developing countries.

What we are still learning
We’re still learning to respect the humanity of the beggars we see on the streets of developing countries. We have far greater compassion for beggars than we had before we began this journey, but sometimes still contract a little at seeing such deep suffering. We try to keep change and small bills in our pockets.

We’re still learning presence, and to not believe in the mind stories, and to not succumb to fear. It’s a constant practice. Life lives itself as us/through us, and the more we listen, and follow intuition, and give thanks, the smoother it flows.
Photo of the day: Santiago pigeon 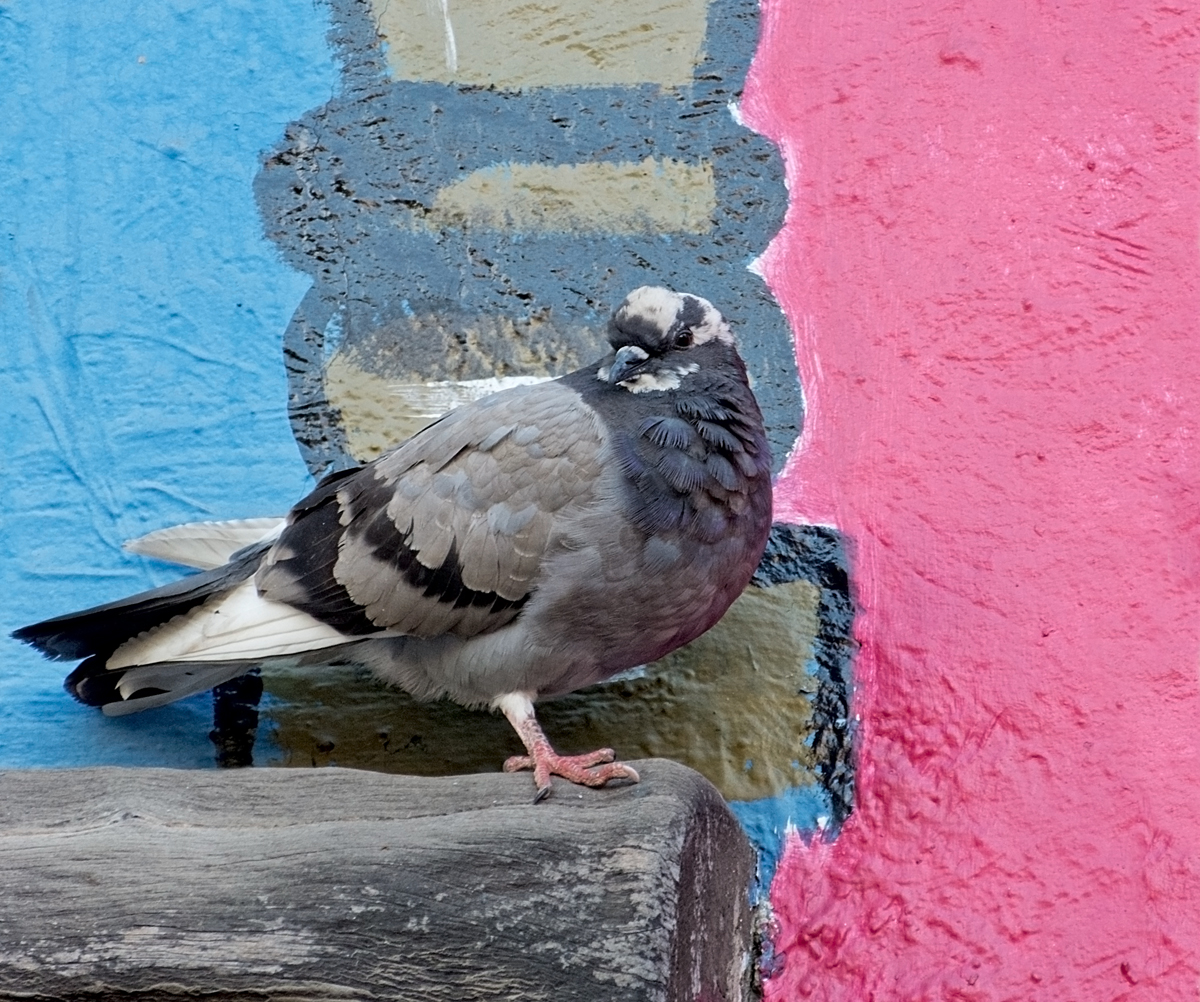