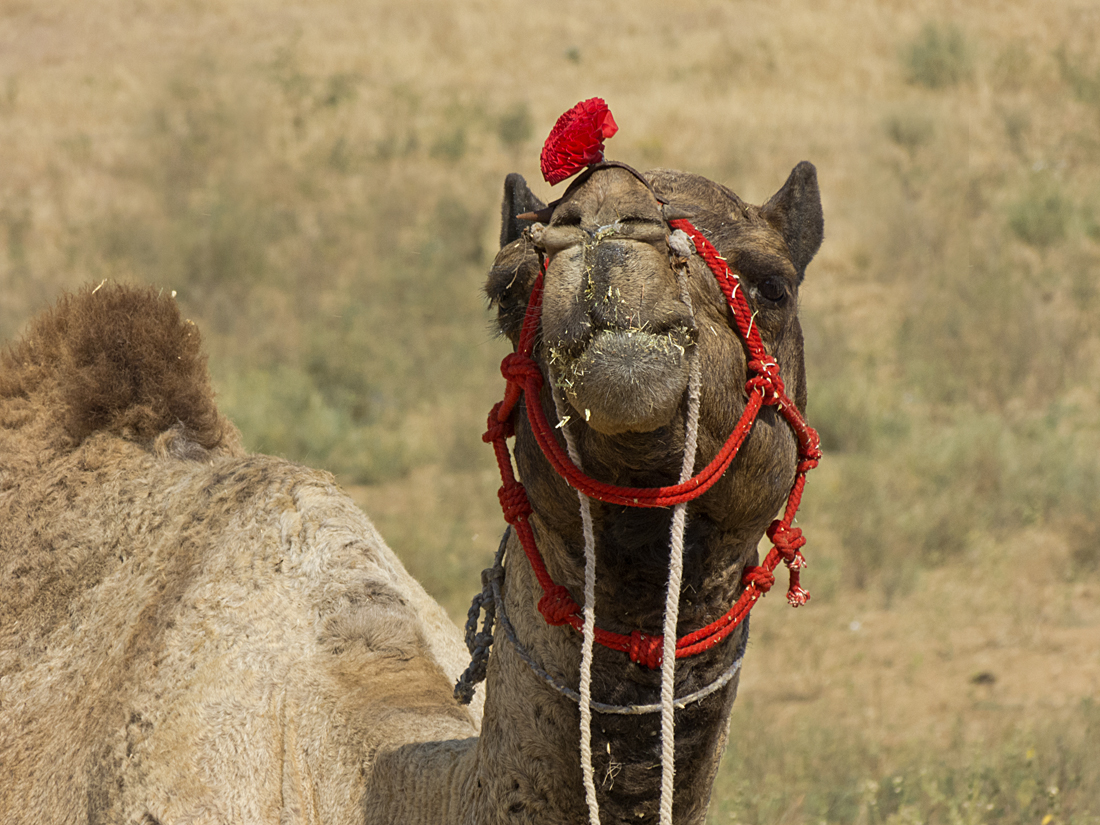 November 20-29. From Don: I’m currently enjoying the exotic and totally mind-blowing Pushkar Camel Fair in Rajasthan. Who knew there were this many camels in India? Contrary to my previously held beliefs, they seem quite even-tempered most of the time, and I haven’t witnessed any spitting, at least by the camels. The cameleers on the other hand . . .
The camels have an elegant way of walking, sort of like super-models, but with a softer footfall.

From Alison:The Pushkar Camel Fair is an annual livestock fair that also includes as many horses and cattle as camels. Literally thousands of people and animals annually descend on the town from all over the Thar Desert. They come to buy, sell and trade their livestock. It’s also their annual chance to go shopping. And it’s also a time of special religious significance in the holy town of Pushkar. Those who come range from villagers with a few cattle or camels to sell, to the elite of the elite selling Marwari horses for gazillions. We were told that a really good camel goes for about $50,000. I’d imagine it’s the same for the horses. These horses are desert bred and many are clearly brought in for sale by extremely wealthy stud farms. Then there are the white horses, some pure albino, that are highly prized as wedding horses. Even the (relatively) poor of India have big fancy weddings, and part of the carnival is for the groom to ride in on a white horse.

The Pushkar Camel Fair attracts about 30,000 camels, cattle and horses and their owners, and about 300,000 people. Tourists come from all over, at least as many from India as from other countries. Also many Indians come for the auspicious full moon to bathe in the sacred lake in the town, and the camel fair is deliberately held at the time of this full moon. So it’s really a huge carnival – a livestock trading fair, games, entertainment, performances and competitions, and a huge and important religious ritual all rolled into one. My words about our time there can’t even begin to do it justice.

There is very little touristy about this event even though there are many tourists, and some events created especially for them – for example a “bride” competition where western girls dress up in the full Rajasthani traditional bridal outfit of saris and accessories, with the exception perhaps of the nose-ring. Both the enormous livestock fair, and the days of religious rituals would be taking place anyway, have been taking place anyway, for hundreds of years in much the same way. It was this sense of authenticity and history that so moved and excited us all as we lived our days in Pushkar – day after day of things to explore, to experience, to see. And just when we thought we’d seen it all there’d be something else to catch our attention. I’ll be happy if I can convey, in the next three posts, even a tiny bit of the excitement and richness of our experience of the Pushkar Camel Fair.

An entire tent village of thousands springs up in a matter of days in a huge dusty field next to a stadium, next to the town of Pushkar. The tent village, known as the Mela, comprises everything from canvas shelters as stables for the really valuable horses, and many entire shops and restaurants, to family tents and small draped awnings over the camel cart – any way to make a shelter for eight or nine days. There’s a “Main Street” along the edge of the Mela, behind the stadium, and all along this main street are the tent restaurants and shops, as well as anyone and everyone with something to sell, with their wares spread out on the ground. They’re selling jewellery, and pitchforks, and tinware, and extremely colourful horse and camel tack, and shoes, and kitchenware, and saris, and farming tools, and just about anything you can imagine. And the people from the desert buy and sell their livestock, and go shopping, and attend the religious rituals at the sacred lake and in the four hundred temples. In amongst all this are the tourists, both Indian and western.
Heading into town

Life on the Mela 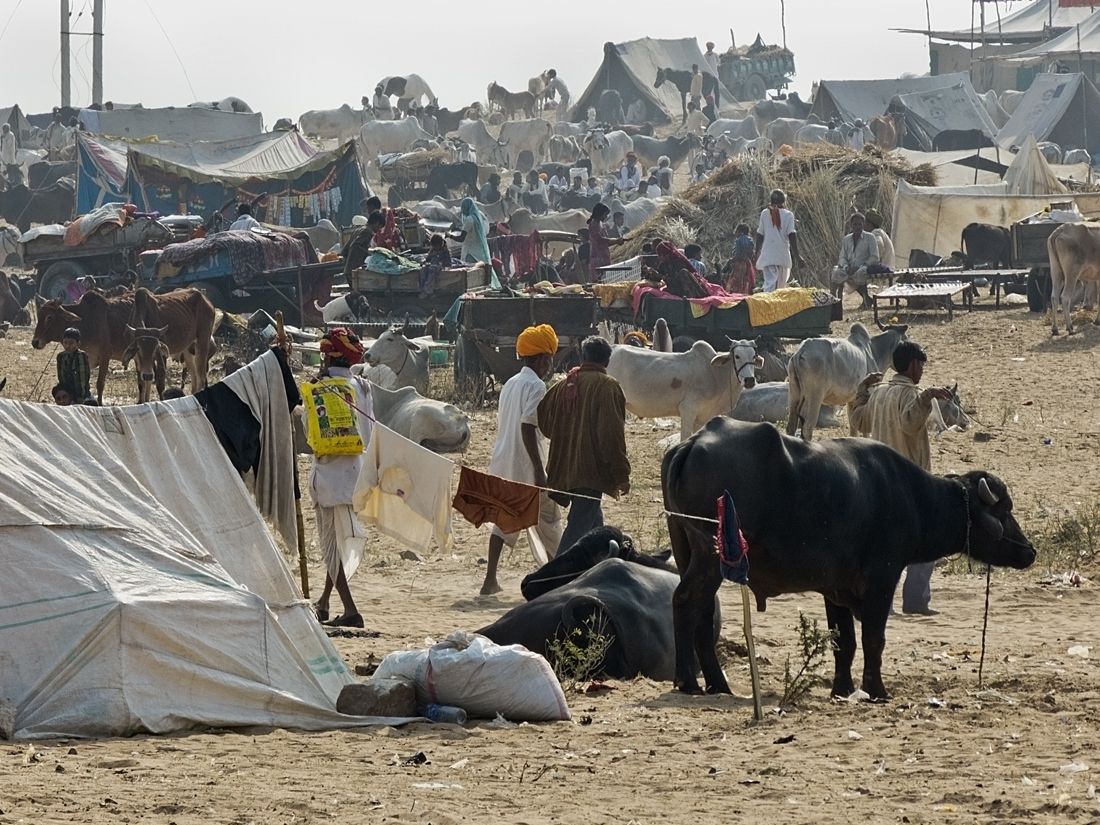 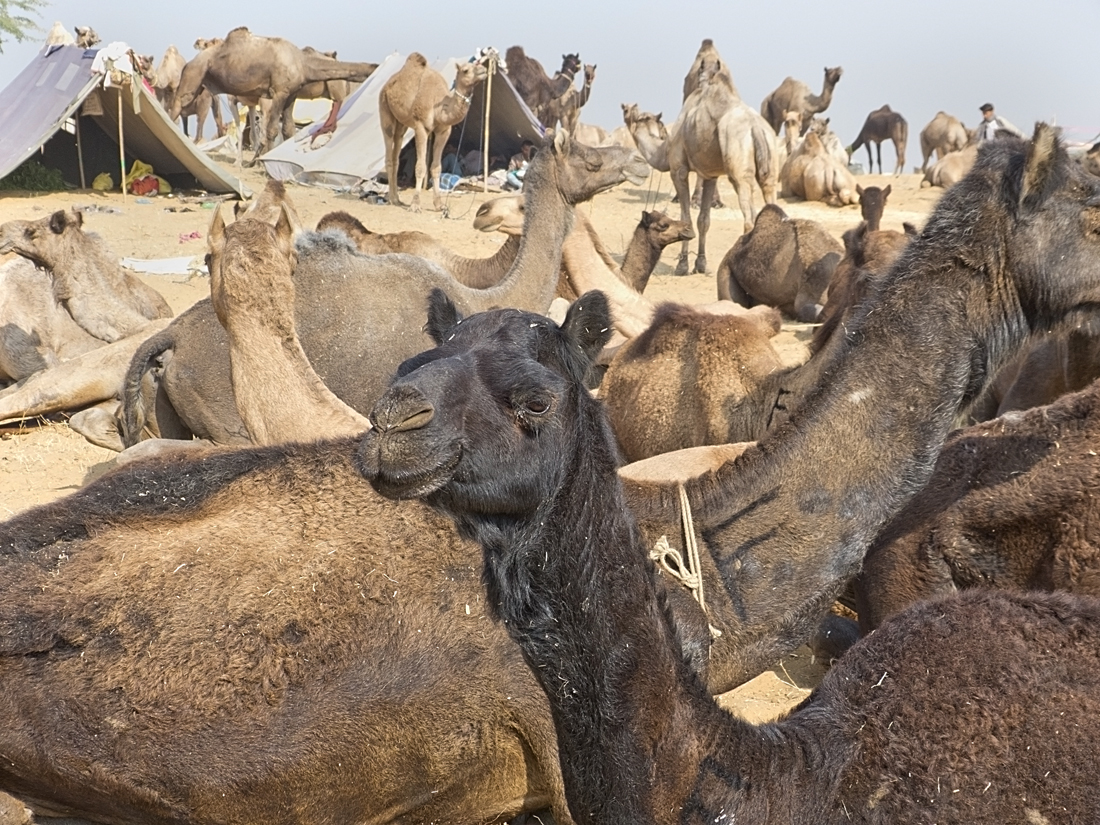 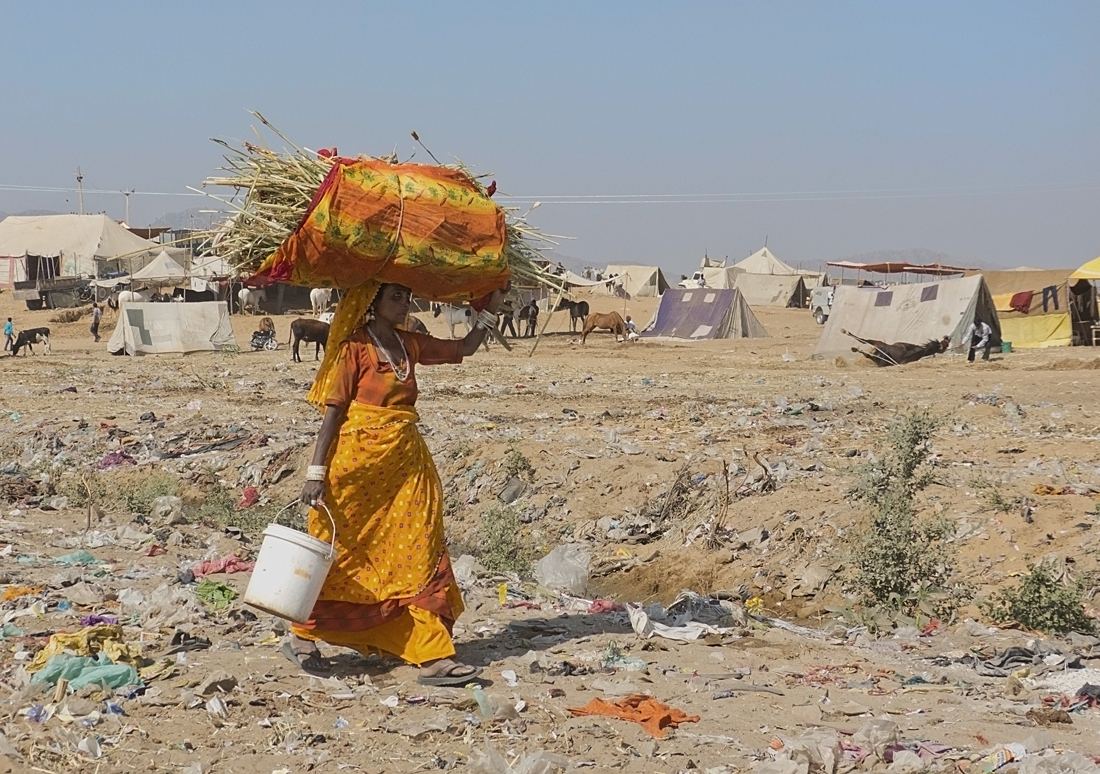 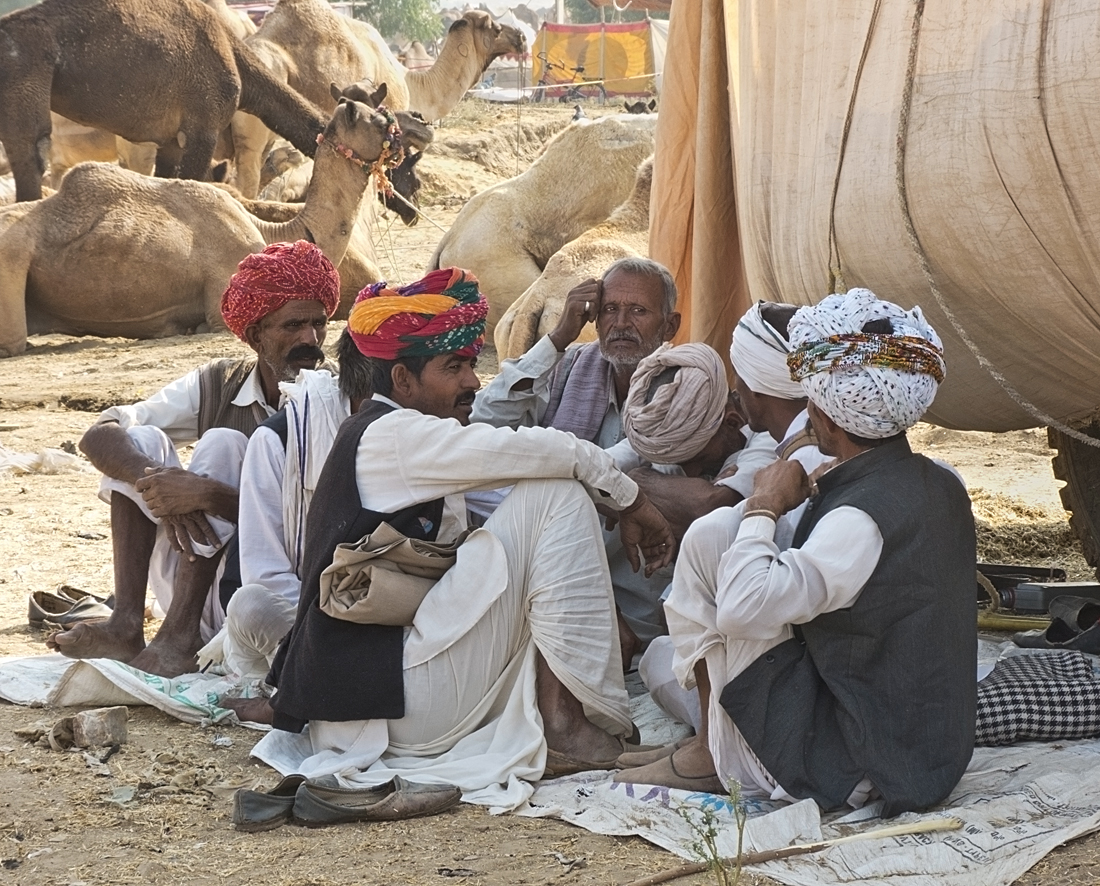 It looks like a little camel buying is going on here, or at least some serious inspection.

These women are carrying bowls of camel dung. It’s spread out to dry and then used as fuel for cooking fires 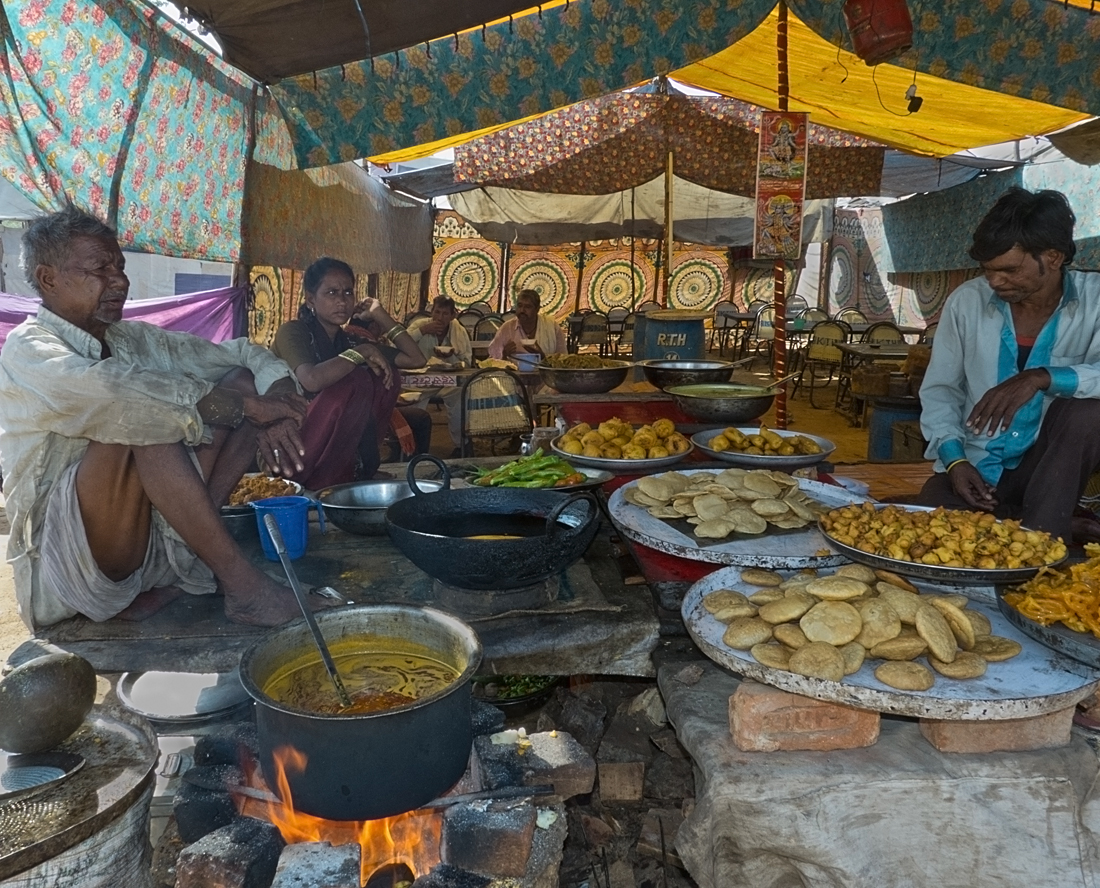 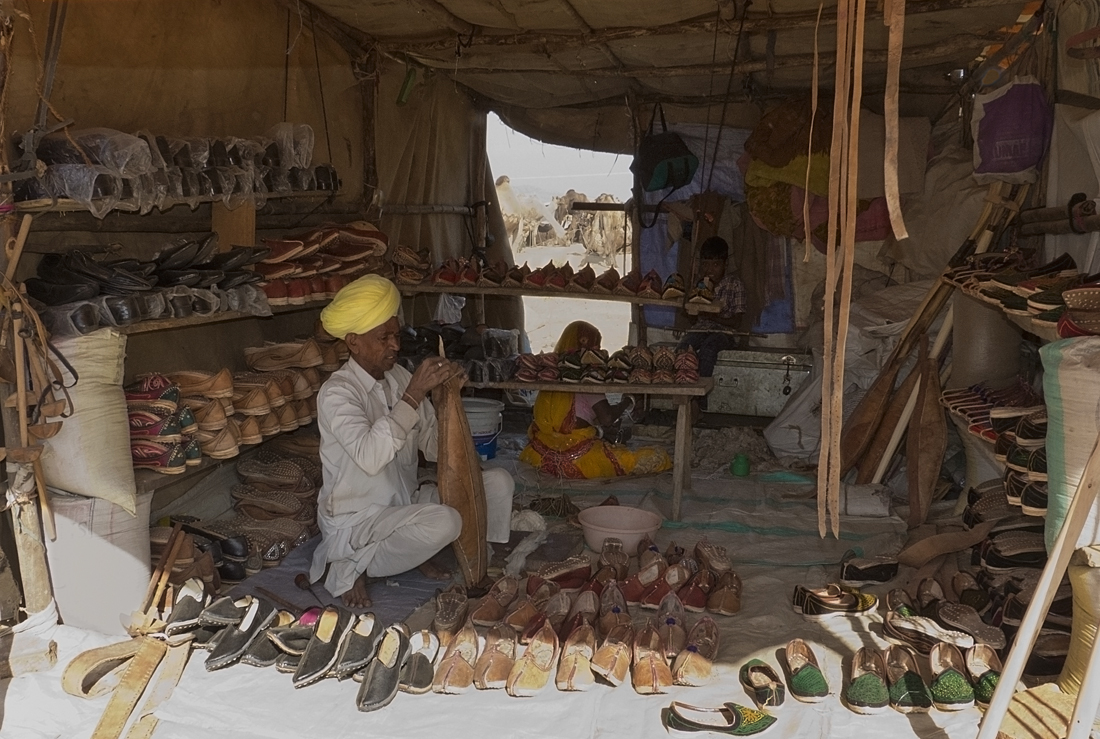 These young women are selling materials to make bracelets 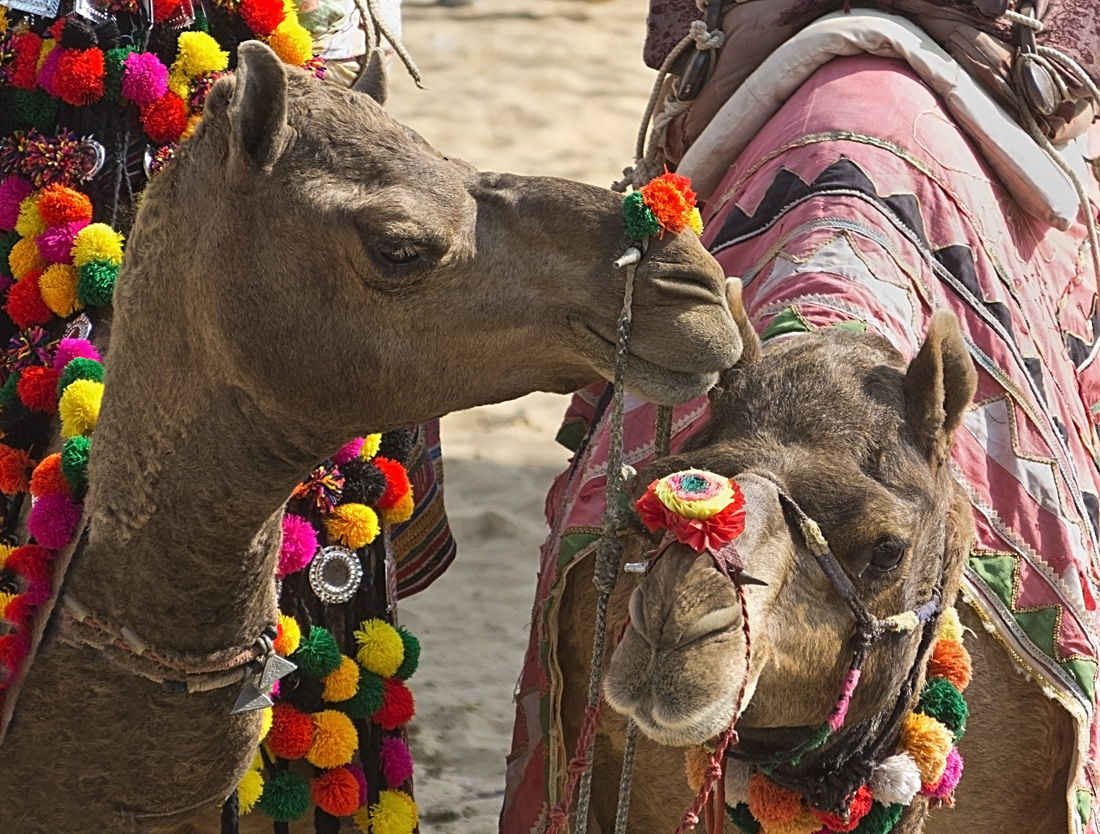 We went on a short camel safari. We sat comfortably in a covered cart pulled by a camel and rode out into the desert for a couple of hours. We’d made the arrangement with the man who owned the camel taxi. But when the time came to go for our ride we were horrified to find we were to be left in the hands of a boy! Not to worry. No doubt he’d been around camels all his life, and he handled it like a pro. Sweet kid. Professional cameleer. At age eleven.

I actually rode along on the back of the camel for a while, then joined the others lounging in the back.
A short note for my endurance rider/horse podiatrist niece – there is endurance riding in India. Who knew? No doubt you’ve heard of Marwari horses from Rajasthan – bred for endurance, and can travel long distances with little water. We were told they cannot yet be exported from India though the Internet would seem to indicate otherwise. I watched the desert riders racing around on their horses. I was completely awed. It’s never seemed so obvious to me that horse and rider are one, each so in tune with, and connected with the other that it’s as if they are one being. Gorgeous to watch.
Yes, this next photo is a picture of two grown men holding hands. They’ve probably known each other since they were babies. It is one of the things I love about India. There is a great deal of easy physical affection between men – hugging, hand holding, walking arm in arm – without the slightest hint of their being gay. They just naturally show affection for their friends and no-one thinks anything of it. The women do the same, though since that is more acceptable in the west it doesn’t draw my attention as much. One man I spoke to about it said he thought it was not a good thing, that the men hold hands as if they are still a child holding the hand of their mother. I’m not sure I agree with this. I think the culture allows the expression of physical affection, and it is a natural thing between human beings. Too bad it is so stifled in other cultures. I jokingly suggested that Don and Robbie hold hands and they were both horrified! No way! And I must admit I would have found it a little unnerving. But in India it is the commonly accepted way. On the other hand expressions of physical affection in public between the sexes is just about banned. Certainly very much frowned upon.

The next post will be about daily life in the town of Pushkar, the sacred and religious ceremonies, the crowds that poured into the town from all over India and the world, my special connection with sacred monkeys, and an ash covered sadhu!
All words and images by Alison Louise Armstrong unless otherwise noted.
© Alison Louise Armstrong and Adventures in Wonderland – a pilgrimage of the heart, 2010-2015.

16 thoughts on “Tent City: the Mela at the Pushkar Camel Fair”