We arrived in India at 2am local time, 15 January 2012, after a thirteen and a half hour flight from Vancouver to Hong Kong, a three-hour layover, and a five-hour flight to Chennai (formerly Madras). The hotel shuttle met us at the airport. We were in bed by 3.30am, up at 9.30, and at 11.30 set off by taxi on the three and a half hour drive to Tiruvannamalai, feeling refreshed and excited.

We were met in Tiruvannamalai by our friends Bhakti and Ram who showed us into our apartment, and then, taking one each of us on the back of their scooters, drove us around town pointing out essentials like the good grocery stores, safe places to eat, internet cafes, and Ramana’s ashram – all within easy walking distance of the apartment which they had found and rented for us a few months prior to our arrival. We cannot thank them enough for all they have done to give us such a soft and gentle landing in India.

Tiruvannamalai is a town of about 145,000 people, and we are on the outskirts in a semi rural area. There is an uninterrupted view of Mt Arunachala from our balcony. Mt Arunachala has been regarded as a sacred place for thousands of years, and it is to this mountain that Ramana Maharshi came in 1895. Ramana is one of the great modern saints. He became spontaneously enlightened at the age of 16, and soon after came to Mt Arunachala and lived in a cave in the side of the mountain for 16 years. He then moved to an ashram a little higher up the mountain. A bigger ashram that thrives to this day was formed at the base of the mountain. Ramana died in 1950.Mt Arunachala from our balcony

And so we discover India in the process. The first few days have been incredibly easy in some ways, thanks almost entirely to Bhakti and Ram’s help, and difficult in others. Our apartment has electricity and running water. What a huge blessing. It’s more than many people have here. We would be stupid beyond belief to complain; and yet it is an adjustment. It’s not as if we’re tourists here, like we were in Europe, just moving through. We’ve come to live here for over two months, to settle in, and so we approach it with a whole different mindset. Coming from the rich west we are spoiled and pampered. Our challenge is to find acceptance with life in a third world country: India is our challenge. It would be so easy to just have a quick look, be tourists, and flee after a week or two, and say “We’ve been to India, we’ve been to Ramana’s ashram, we’ve sat in Ramana’s cave”, and really would probably have gained nothing from it. Our challenge is to stay and to see what comes from the staying.

Those of you who have been to India know what it’s like. For those of you who haven’t I’ll try to give you a glimpse, a few early impressions. India is not easy: care and consciousness are needed with regard to food, water, traffic, mosquitos and the possibility of theft. We are constantly paying attention. When eating out eat nothing raw, and no meat of any kind. At home make sure all fruit and vegetables have been first washed in water with a few drops of grapefruit seed extract to disinfect them. Only drink bottled water. Especially remember this when cleaning your teeth since it’s so automatic to just turn on the tap.

I’ve been bitten by mosquitoes four or five times. Not really worried about it, but it does mean I need to take more care with regards to using insect repellent. My choices are Avon Skin So Soft bath oil, which, of course, makes my skin oily, or regular insect repellent with a high percentage of DEET. So it’s oil or chemicals – take your pick. I’m tending to alternate. The incidence of malaria around Tiru is not high apparently but we’re not willing to take the risk. Oh, I don’t know. We have some idea that if we take enough care we’ll get out of here alive.

The water issue has been the easiest to deal with as the previous tenant in our apartment left large containers of delivered water, and he had no problems with it, and so far neither have we.

I love the hot weather, but it’s no tropical paradise. It’s dirty and dusty and squalid and crowded and messy and noisy and there is very little that’s beautiful about it. There may have been once, way back when, but not any more – humanity, in vast numbers, has taken over, and the streets are filled with people, cows, auto-rickshaws, cars, buses, trucks, bicycles, scooters, and garbage. Only the garbage is silent. Always always always watch where you are walking – the ground is uneven whether paved or dusty dirt, and there is much to step in that you’d really rather not. Our apartment is a sparse and spartan oasis. Our street

The gate into our apartment building

Oh but the life! Life living itself, with so much richness and busyness and noise and colour. As we get here, really get here, a little more each day, we get to see how very alive it is, how wonderful it is. People are as people everywhere of course. Most are friendly and welcoming. All are busy living their lives in the best way they can manage. It’s a fabulous mélange of sights and sounds – sari’s in every bright colour, sadhus (holy men) everywhere, girls in sparkly dresses and bare feet, for that matter pretty much everyone is in bare feet, dogs and cows and goats and chickens mixed in with cars and trucks and scooters and bicycles, bright fruit stalls, and really brightly coloured buildings next to huts of palm fronds. It’s organized chaos, and amid the chaos businesses are run, meals get cooked, goats herded, cows milked, and jobs done. The people are incredibly friendly. 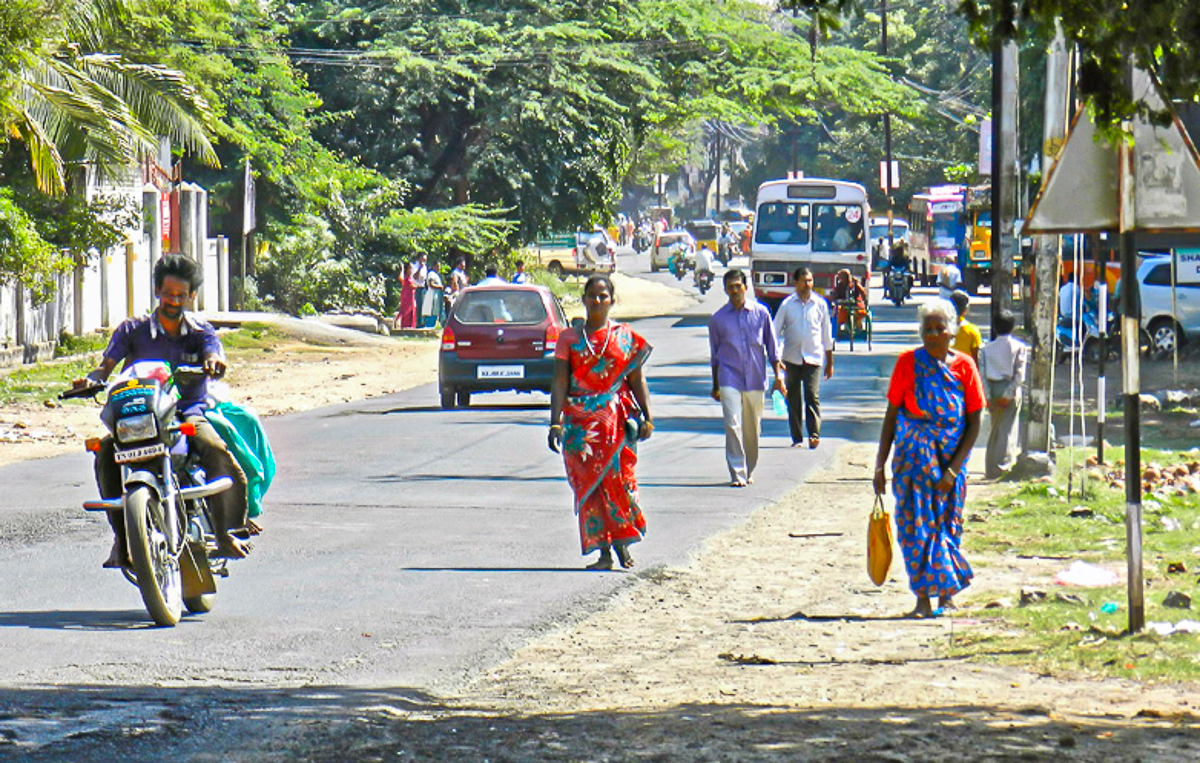 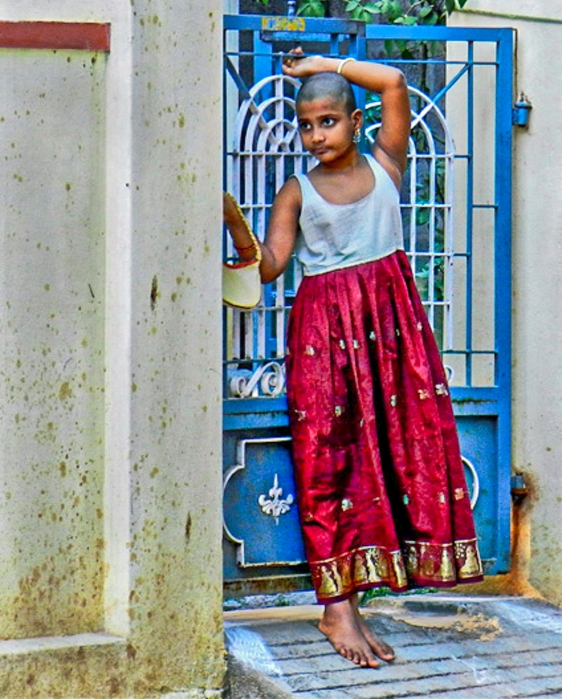 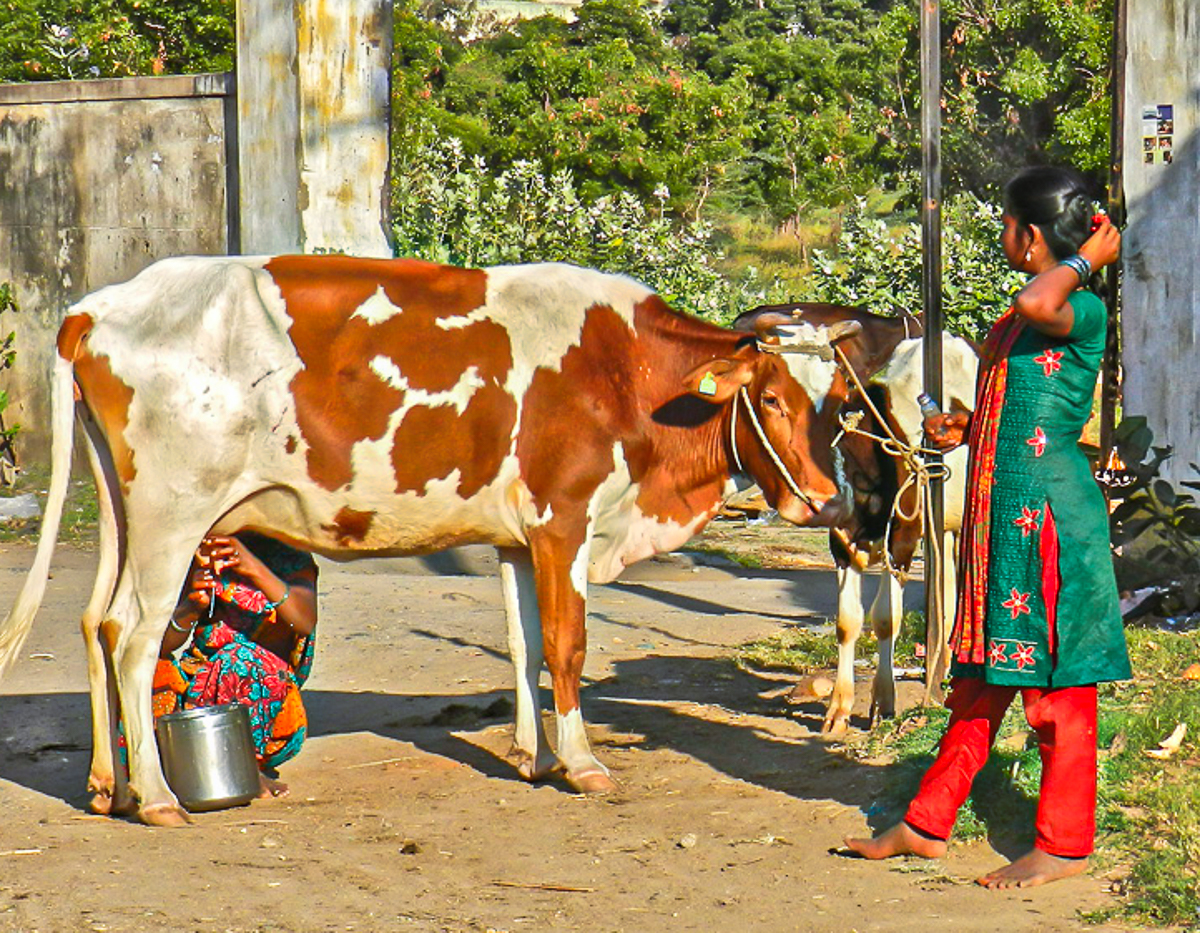 There are many westerners here, most of them for the same reason we are – to sit with Ramana and the teachers that come here because of Ramana and the mountain.

And there’s monkeys everywhere, and peacocks and peahens roaming the grounds of the ashram. 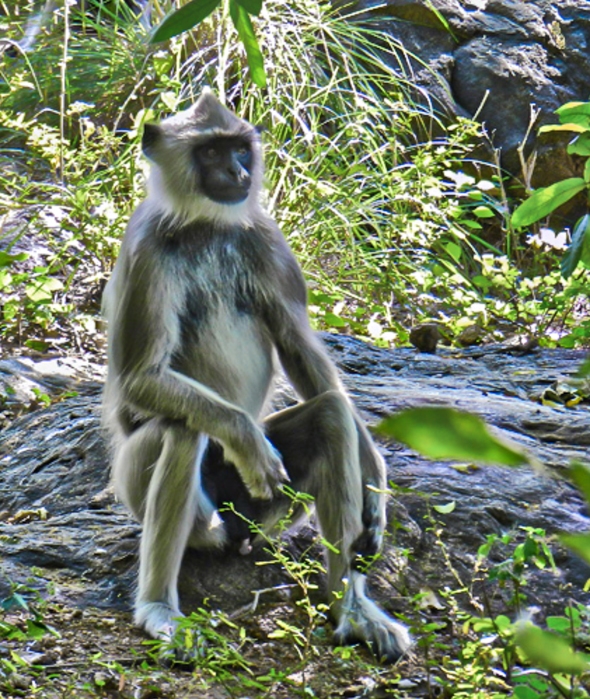 We arrived in Tiruvannamalai during “Pongal”, an annual four-day harvest festival. Special chalk drawings called kolams (symbols of happiness and prosperity) are done out the front of the house. Cows horns are decorated. Parades are held. Unfortunately we missed the cow parade due to a jet-lag nap. 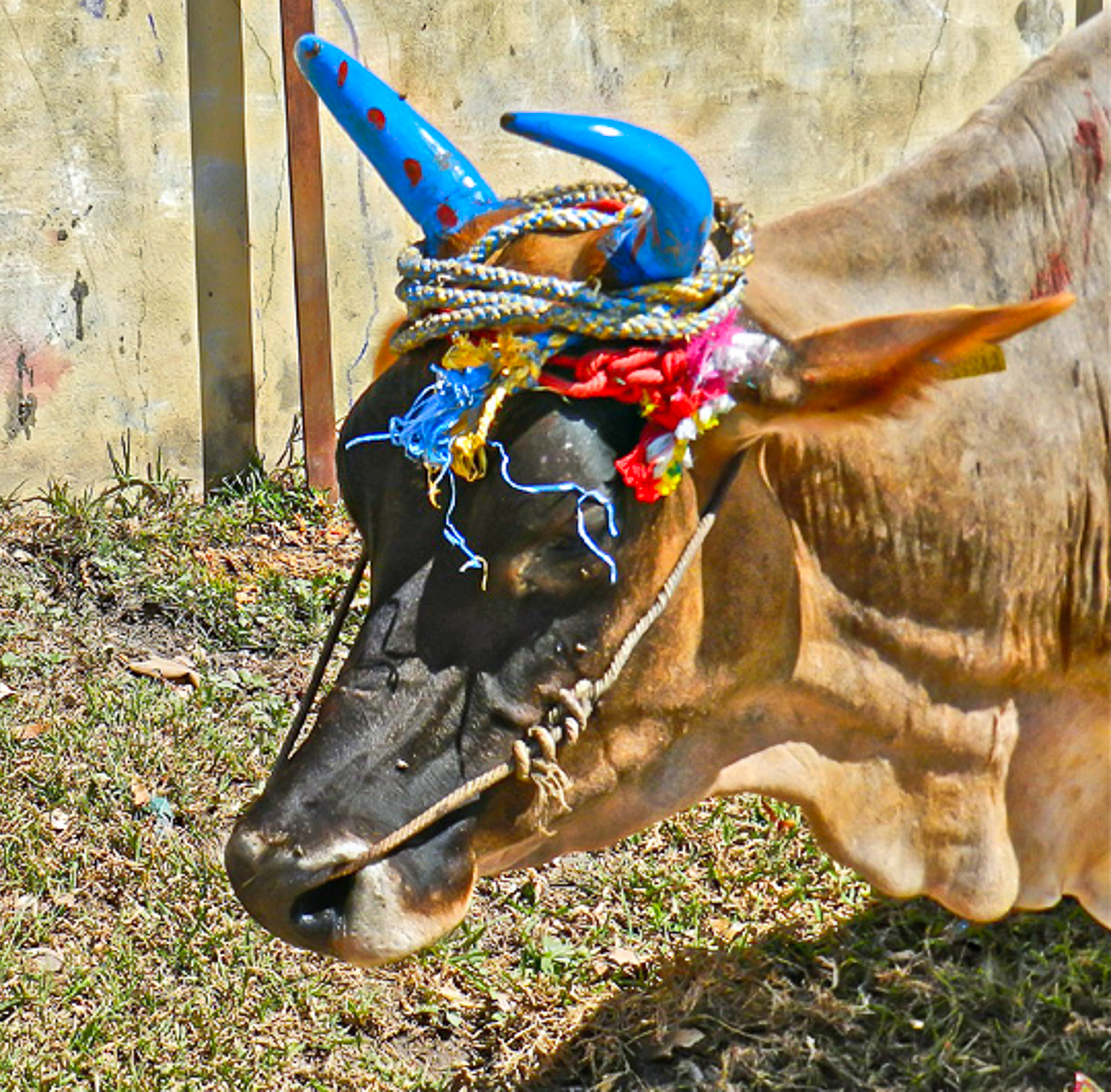 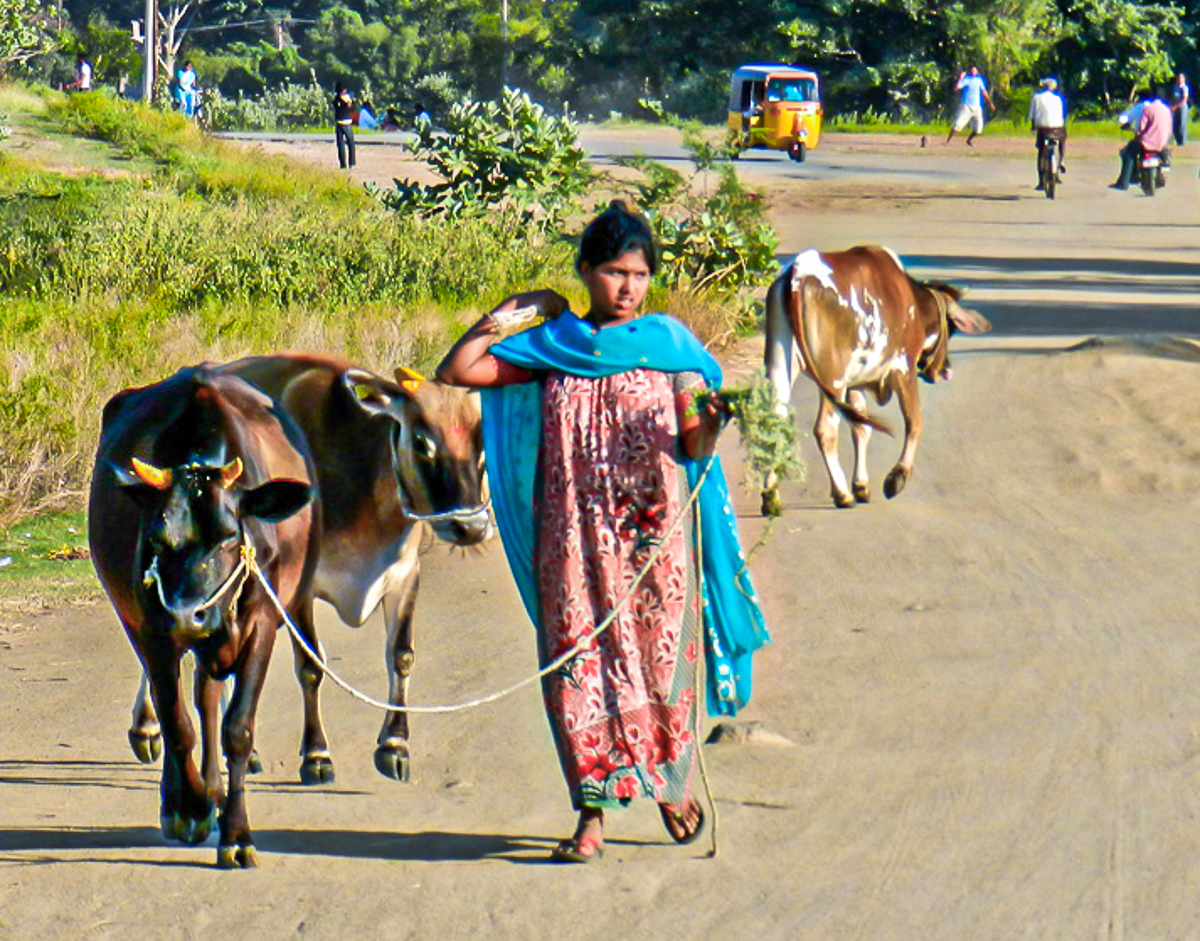 We saw a wild mongoose – up close! We walked around the mountain. We sat and chatted with the Wandering Swami of Arunachala. The longer we are here, the more we love it. More to come in the next post.